120 replies to this topic

My Storm Troopers are, arguably, finished. Excuse the shoddy quality of the camera yet again. I wanted to go for my usual sand + Steel Legion Drab bases, but guess who can't find his box of it in the midst of the apocalypse? 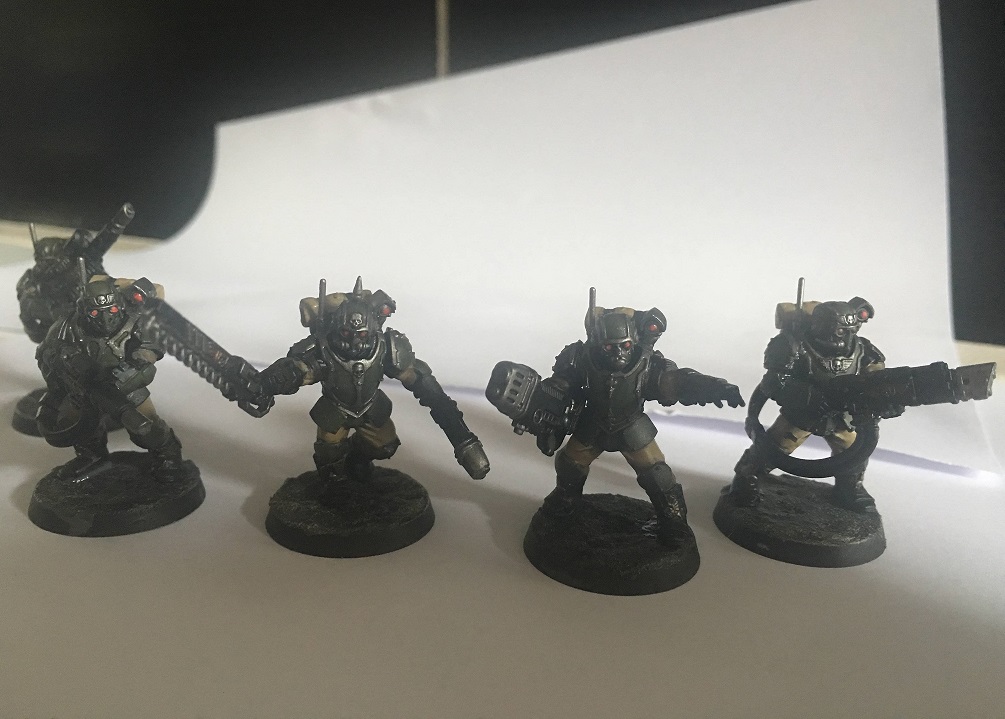 This was meant to be more experimental than it turned out being. Things I've discovered are that the Scion kit would look about a hundred times better if most of the helmets included the respirator filter as it would both 'fill out' the faces a lot more and hearken much closer to the old metals. Secondly, it would have been a good idea to grab some Contrast for the plasma coils but unfortunately there's not a lot I can do about that right now. I made the mistake of giving more sub-assembles a try and the weird patchy black strips you might see in places are the result. Needless to say my new most hated model is the Volley Gun(ner?). Zandri Dust over a basecoat of Steel Legion Drab is definitely the way to go, as trying to put it over a black undercoat (the sleeprolls) turned out as well I predicted going by past experience, but I wanted to see the difference both on the same model would make.

Once the event is over I'll probably strip them and give them another bash as I'm not too thrilled with how they turned out.

Anyway, here's a Commissar I dug out and will be using to round off the Patrol Detachment requirements: 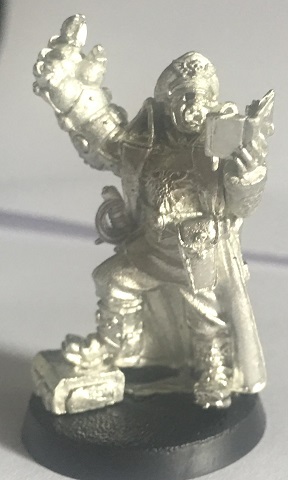 SEE YOU ALL ON THE FRONT LINES!

Vow 3 Complete!  Neglected sleep and family but I got them done!

Tried something a little different with each of them.  The guy with the feather was always meant to be a Praetorian.  The other 2 are in my main army colors.  Tried a darker grey on the Powersword/plasma guy but I'm not sure if it's my favorite.

The 49th are mustered, their weapons hot and primed to slaughter the alien for fun and profit.

What a fun event... I am consistently blown away by the quality hobby skills of the members of this subforum!

Glorious! Great to see these completions rolling at, and what better timing for today is the last day for the event so we're finishing up

The Lord Commissar is done and with it my Patrol Detachment. 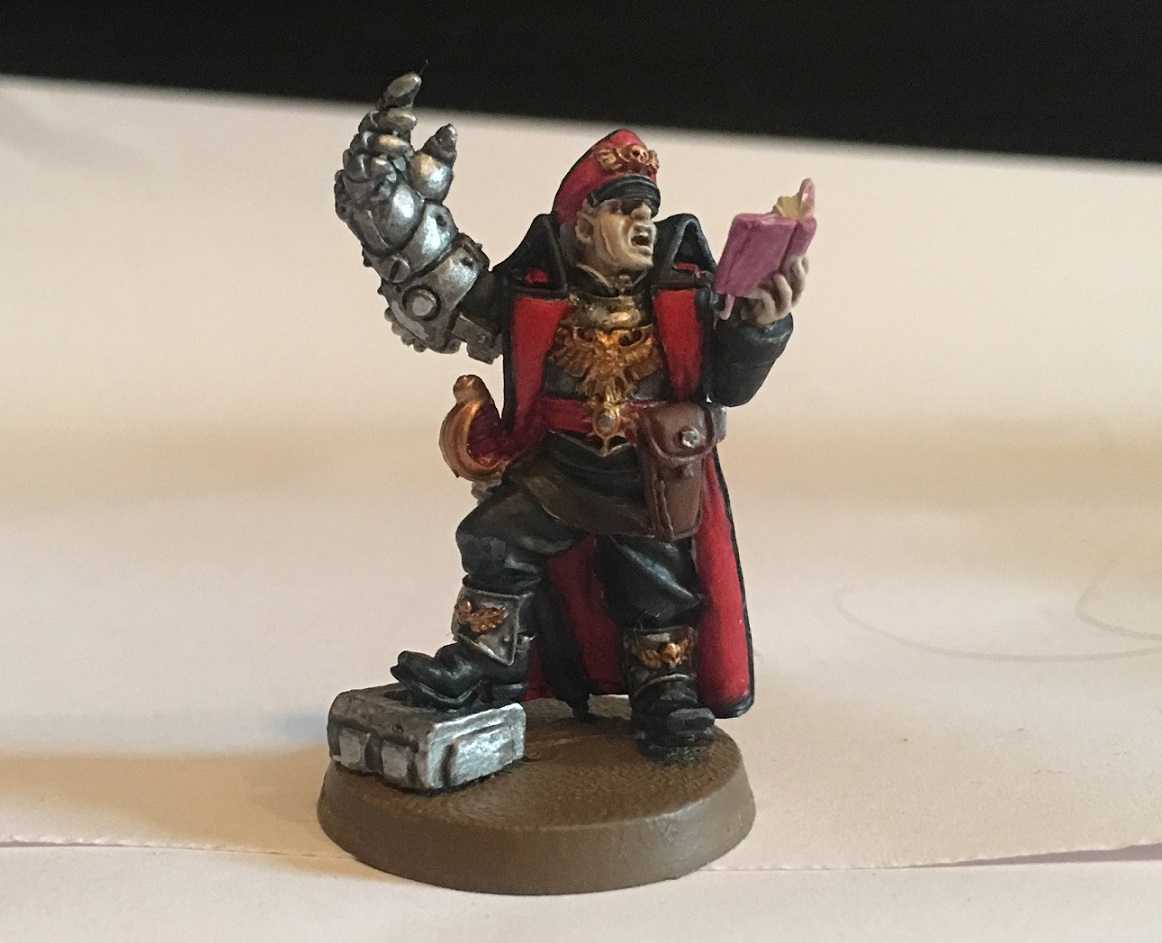 He does admittedly need properly basing, but I really didn't wish to put him on the same Astrogranite as the Storm Troopers and risk him not meshing with the rest of my Imperial Guard. Unfortunately I still haven't been able to find my sand so I hope just painting it over in Steel Legion Drab will still suffice. I did manage to misplace a Screamer Pink I swore I had, thus the very streaky Primer where I had to make do with Magos Purple and its very poor coverage, alas.

I also didn't realise what appears to be a bookmark on his Primer is a piece of surprisingly well-placed metal flash, at least judging by the webstore image.

These aren't going to get any more finished before I run out of light for taking photos.

So that's the vow done if its not to any real standard.

Well.. 5 are done to a better standard and based, the other 7 are still in basecoats. The last 4 days were really intense.

Great work on all those IG formations everyone. 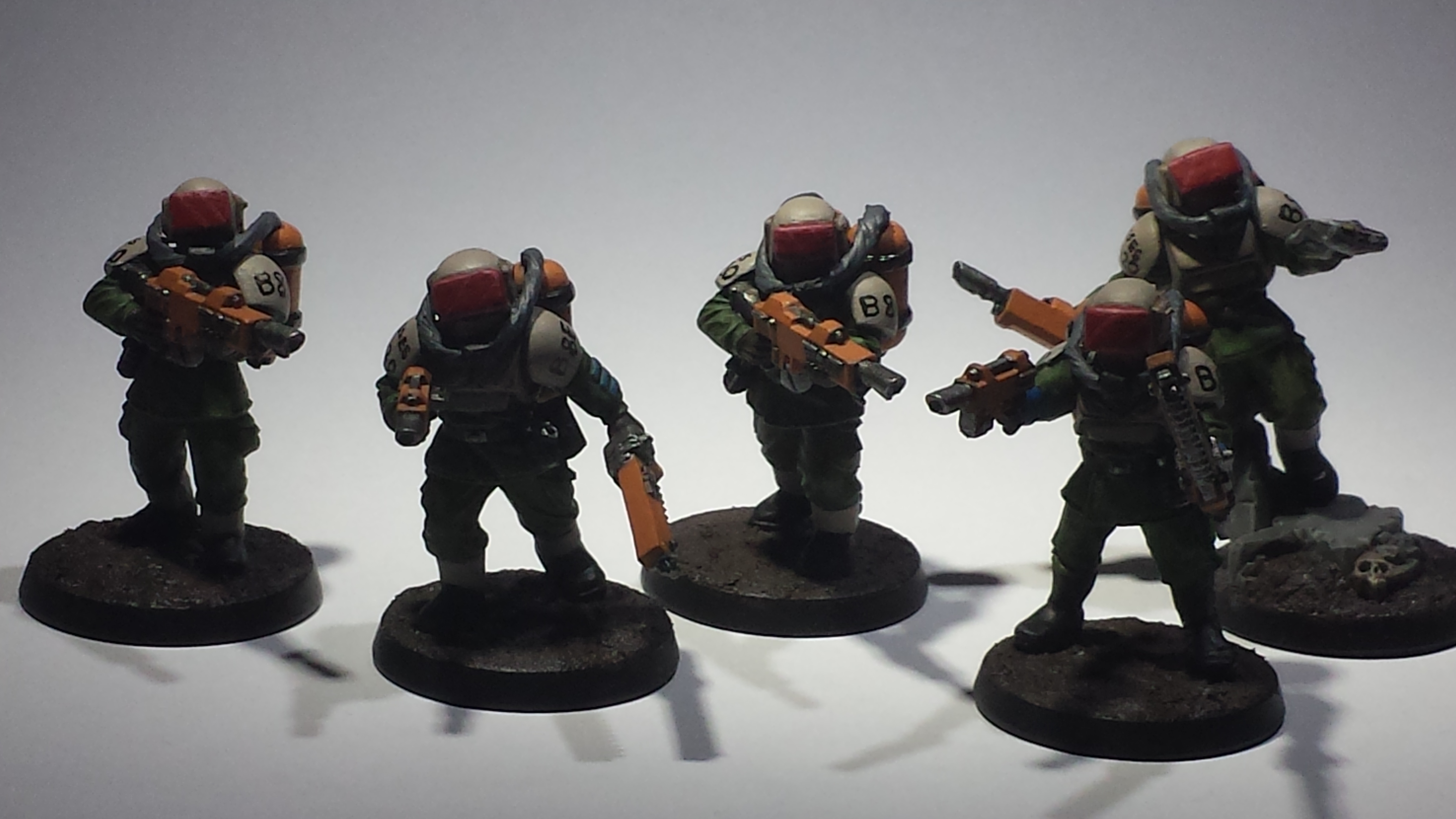 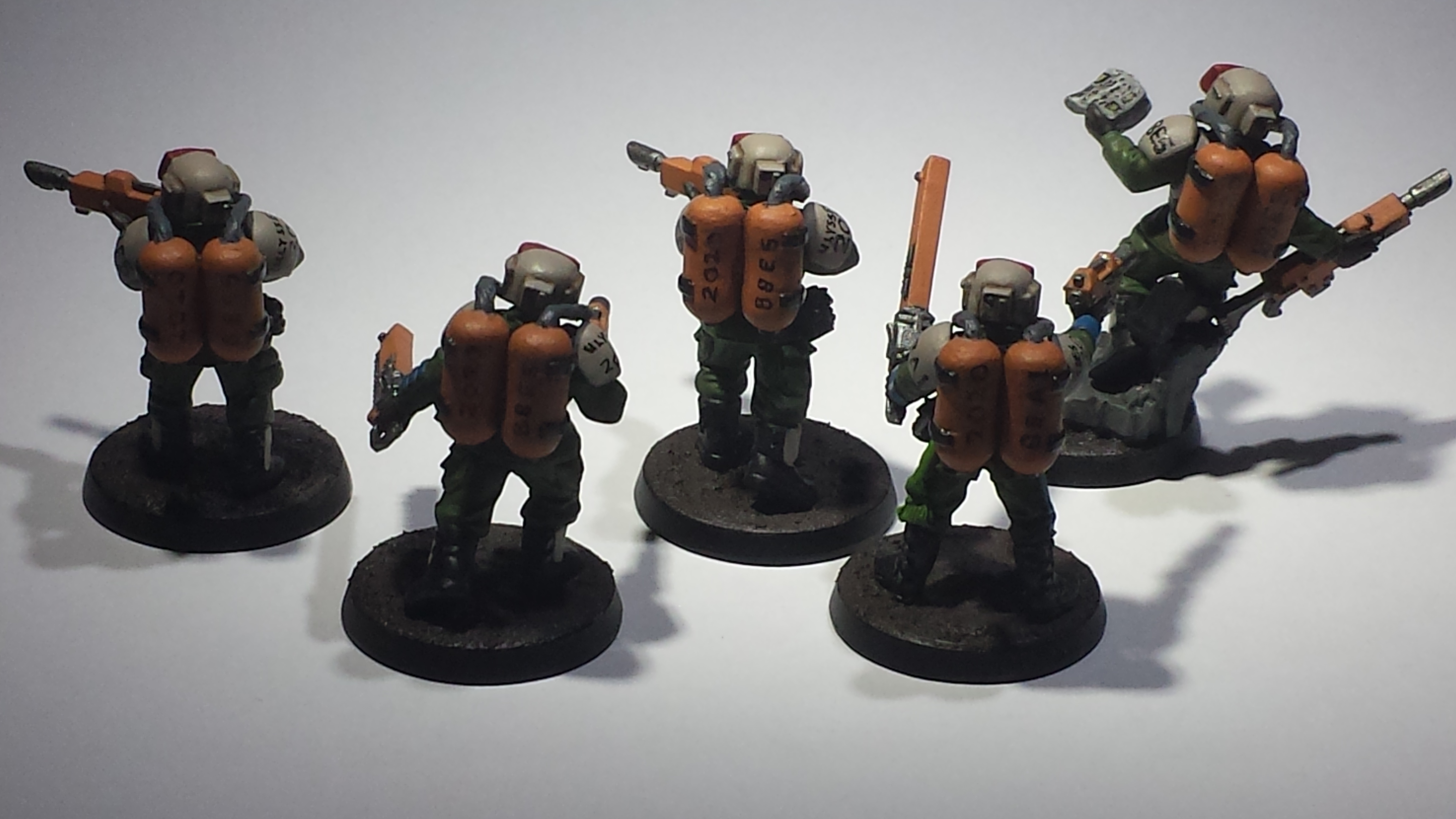 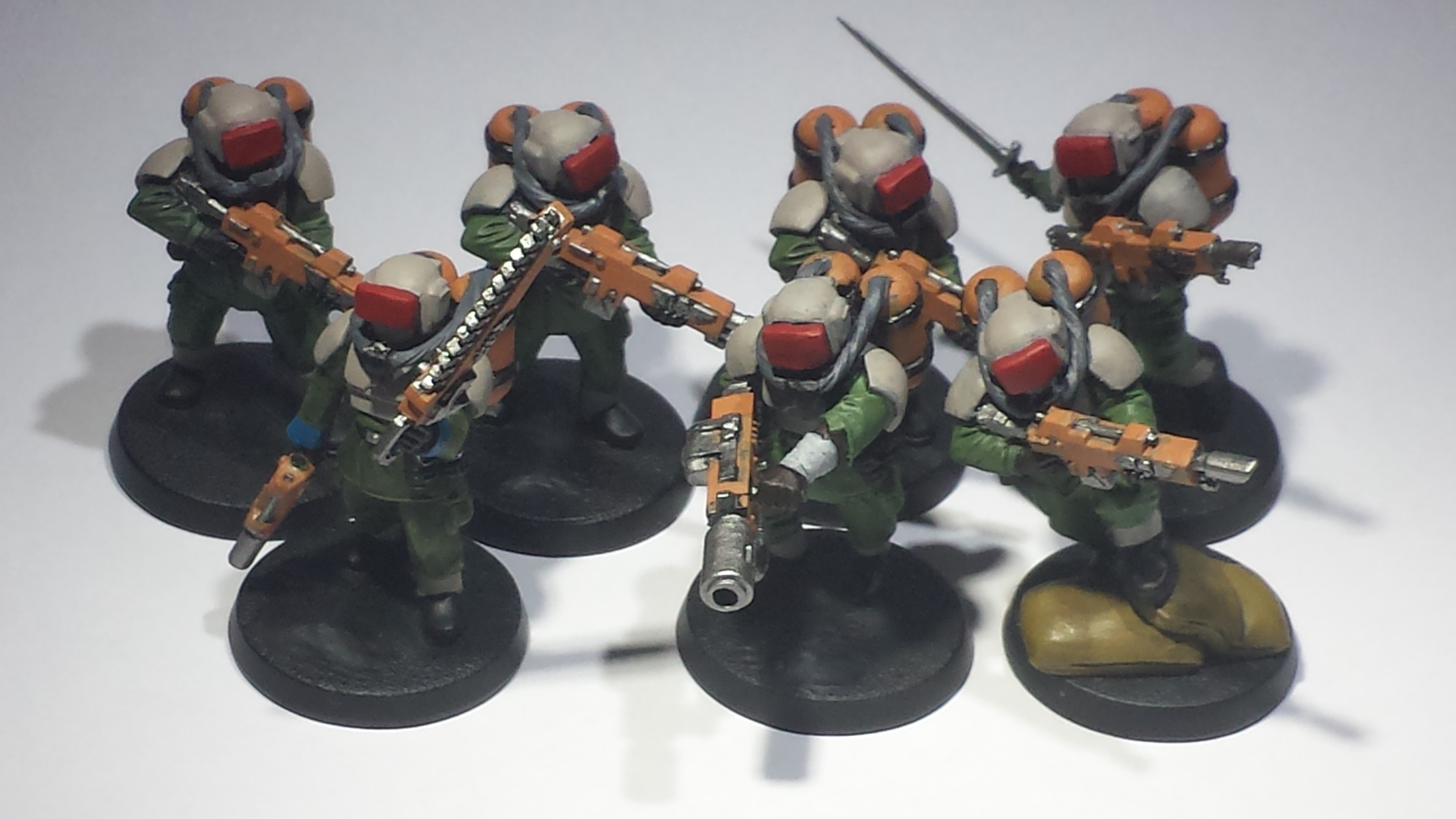 Final hours of the event! Glad to see all commanders reporting

We shall review the tally in the morning well done all

Just wanted to say thank you to Duz for organising the event and well done to all the people who completed their vows!

This has been one of my favourite mini painting challenges on the B&C. I feel like the engagement has been really high, with updates being posted every day

"I once gave the order to one of my platoons to fix bayonets and charge a squad of genestealers. If they believed in the emperor hard enough they could win... I don't think they believed enough..."

Yeah, thanks. Great event Duz, it was really helpful and motivational, especially seeing all those models.

Back to looking at Taurox sprues for me!

I didn't want it to end.  I was getting sooo much done.  I"m already queuing up detachments for the next event, whenever that may be (I have a significant back log...).

Congratulations guardsmen! This is a commendable effort!

Word is that the Lord Militant himself, will be sending each commander his personal thanks, for raising such a fine fighting force.

These efforts ensure the successful liberation of the Chalnath Expanse!

To aid in the liberation, we have seen 100% tithe compliance, with the following detachments raised:

More than enough to defeat the filthy Tau.

For your valiant efforts and on behalf of the Lord Militant you may all wear the following honour with pride:

Well done everyone who participated in the event!
I have not seen a 100% completion in any events I've participated in so this is great. Hopefully you all got through some of your backlog

Congratulations everyone! Both on the new models and the much coveted 100%

The xenos will have this burned into their racial memory, the shame of defeat shall haunt them until the day the last of their kind is purged by bayonet!

Awesome.  Good job, everyone!  I will wear this with pride.

I just happened to tab back onto this thread and was pleasantly surprised to see the 100% completion. Awesome job.

Thank you for the event.

Washing, bases and rims are all done now, bringing me up to 16 infantry so far.

Congratulations everyone; and thanks for setting the event, Duz. It gave me the motivation to build and paint a fair bit. 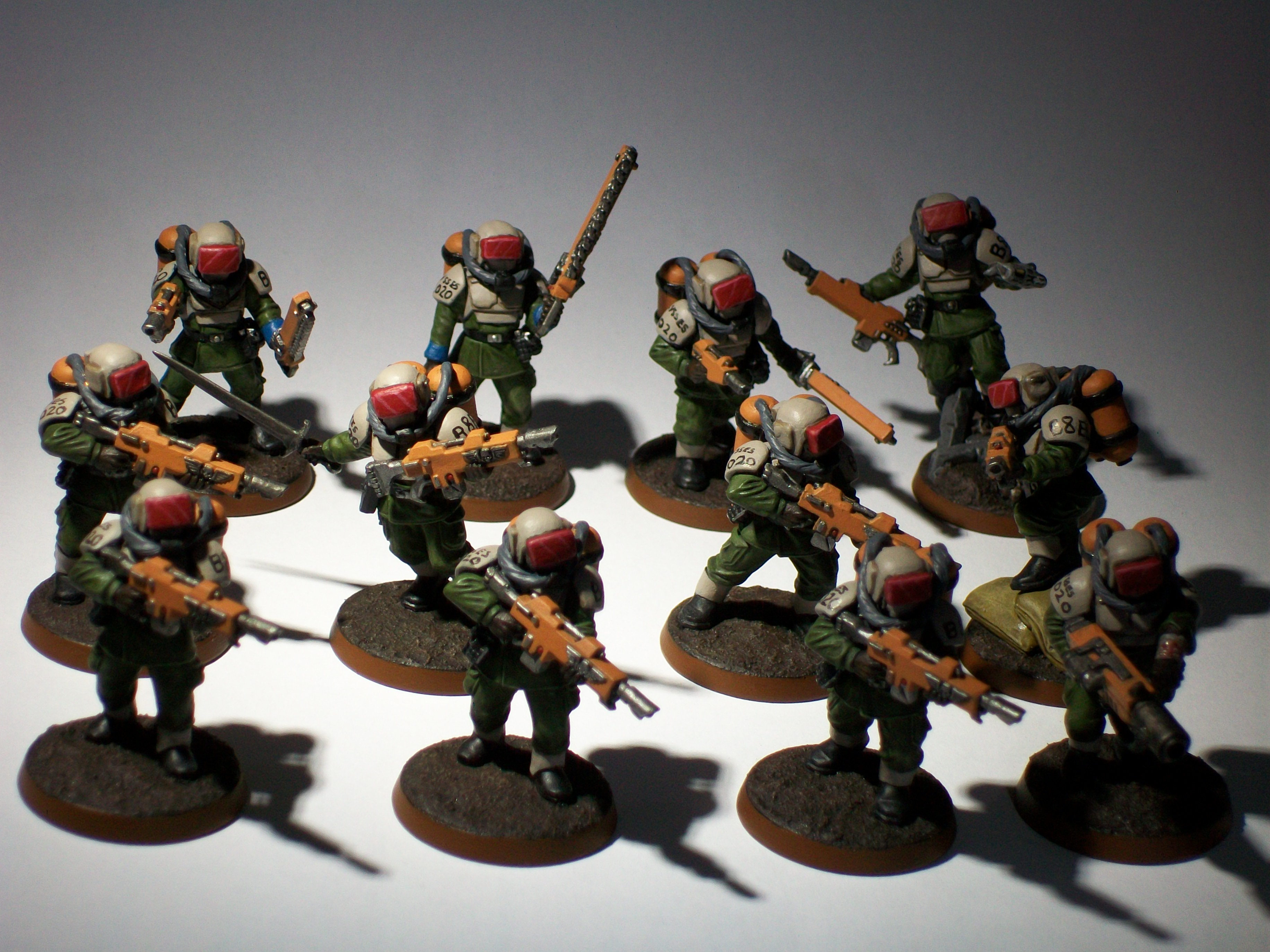 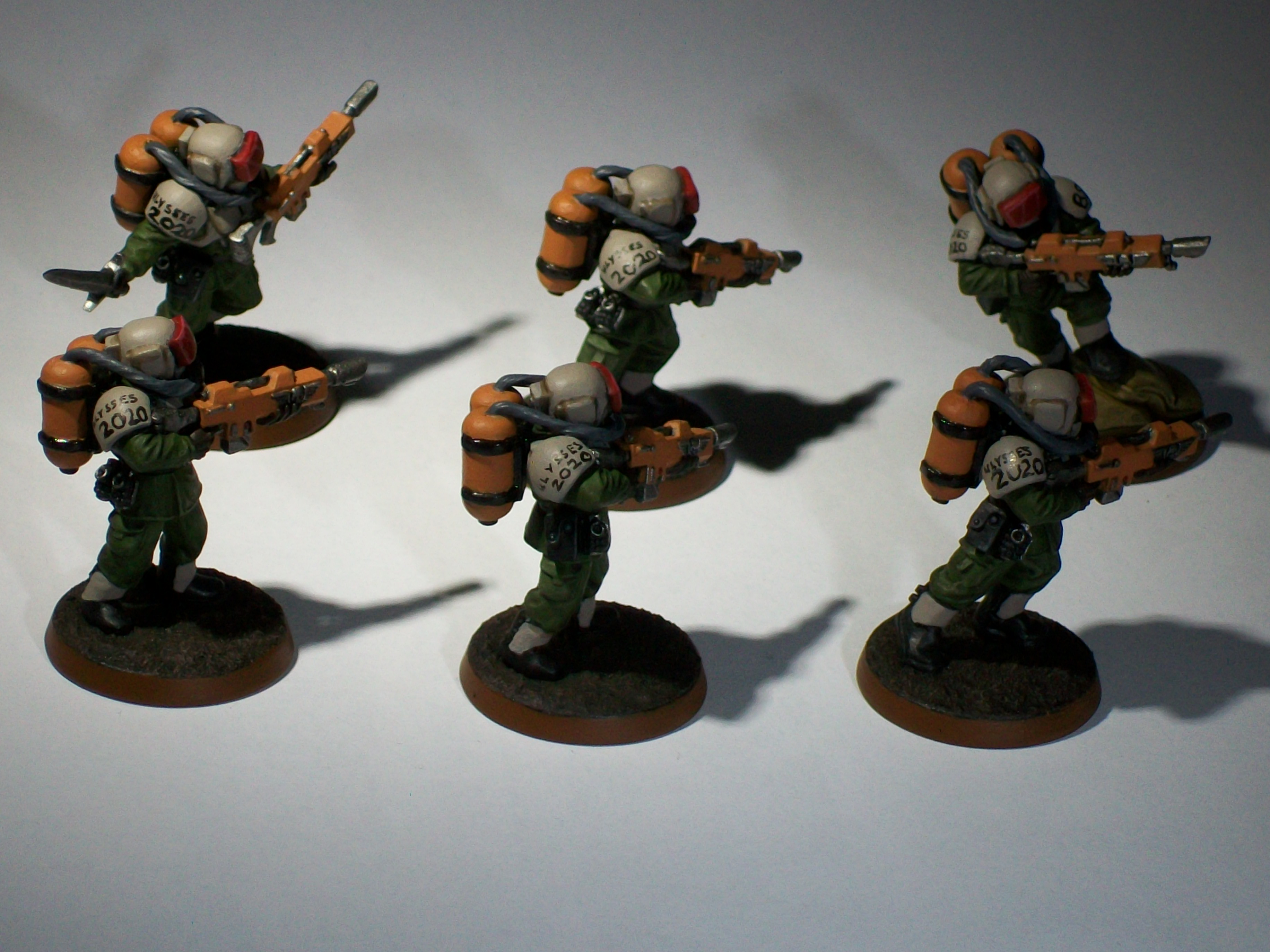 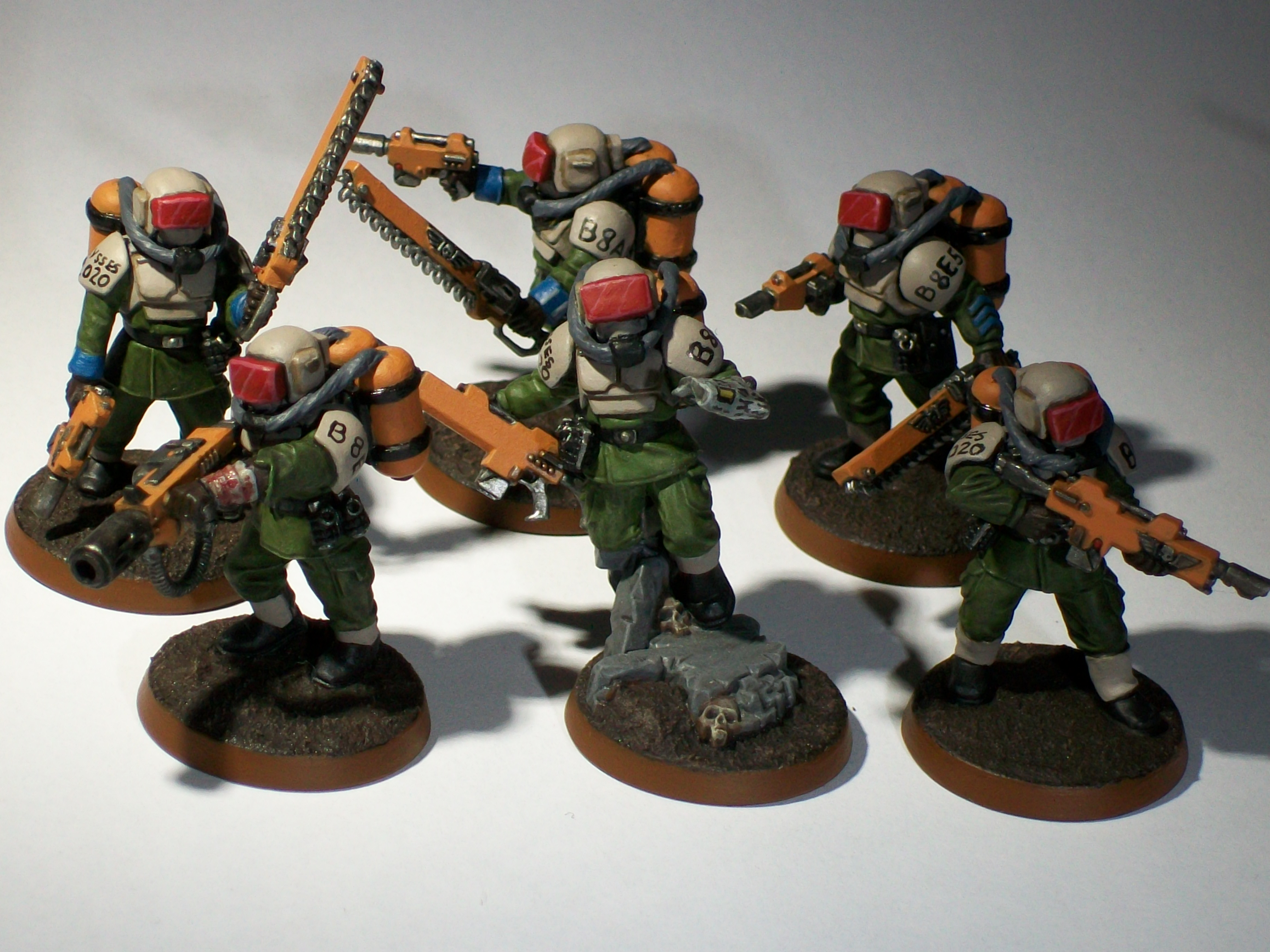 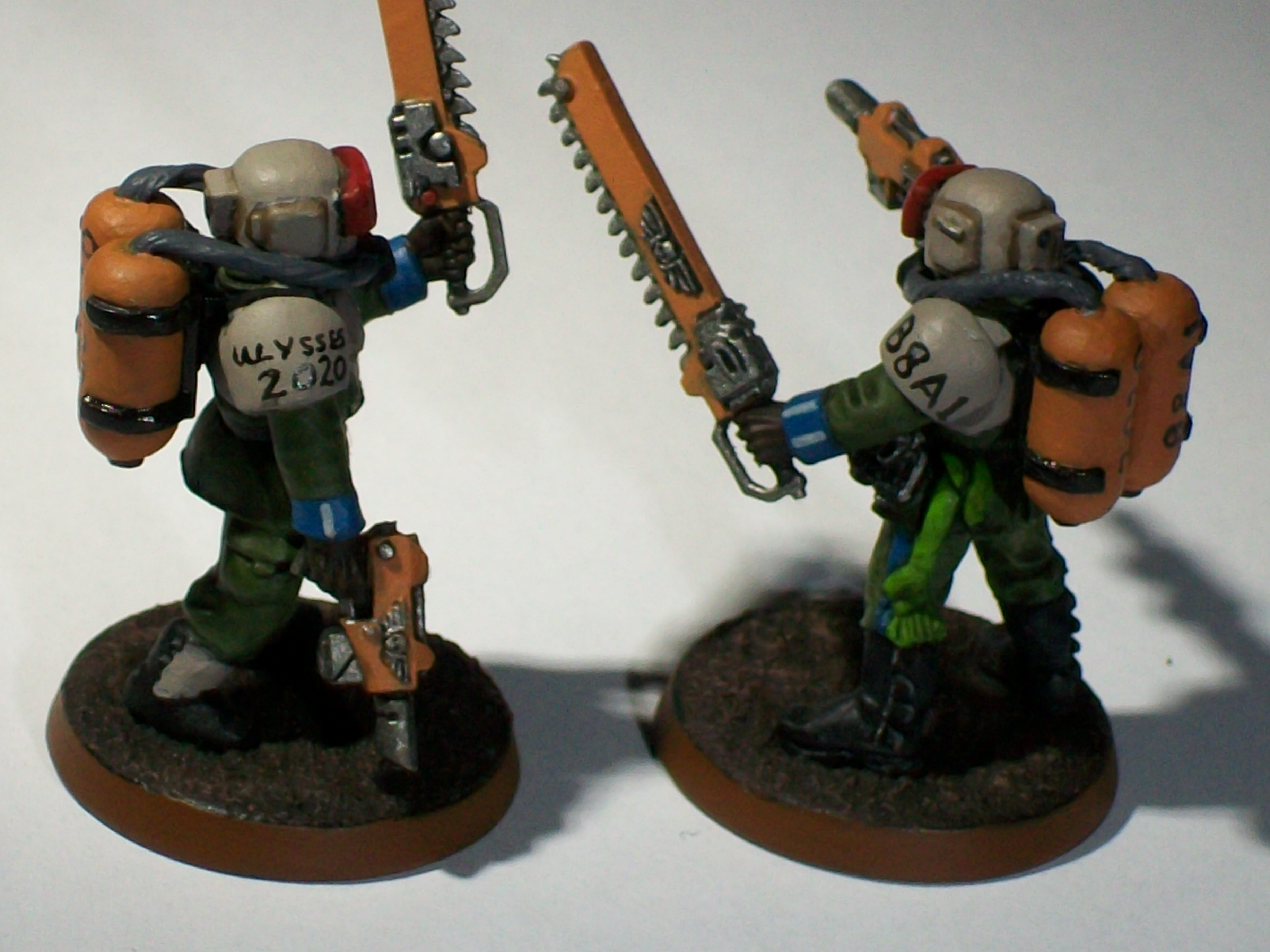