72 replies to this topic

No time like the present to retool an old army that Ive tried to get back into several times. So this log will be an ongoing record of the old models transitioning to a new paint scheme employing the tricks Ive learned in the last ten years as well as an addition of newer models that Ive had or acquired recently. I have everything from Scouts to Land Raiders and everything in between to redo. So, if you like the look and the scheme stick around and see whats new. Ill be trying to get a unit redone every two weeks. If you have any tips, either on painting or on actual game play for Blood Angels Id appreciate it. Ive been out of the game for a while and haven't played any 8th ed. Hopefully that will change once I start to fill out an army with this new scheme.

Anyway, Ill get on with it. I went through a couple test models looking for a look that I liked. Ill include one of those as well as the first set of Infiltrators that I started with. I picked up the Start Collecting Primaris box because it was such a good deal and I wanted the Eliminators anyway. We'll see if these guys manage to kick some scouts out and take on the infiltrating roll. 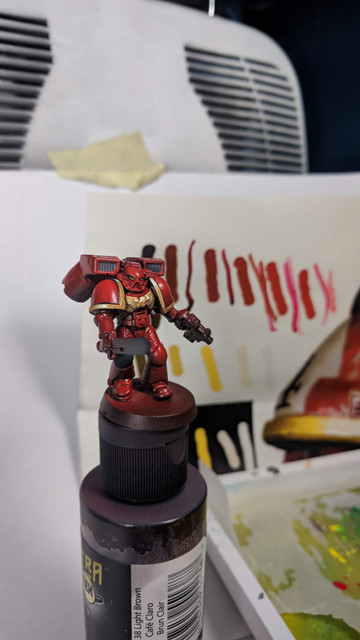 Wasnt very happy with this one, may have been the execution but it just didnt grab me. 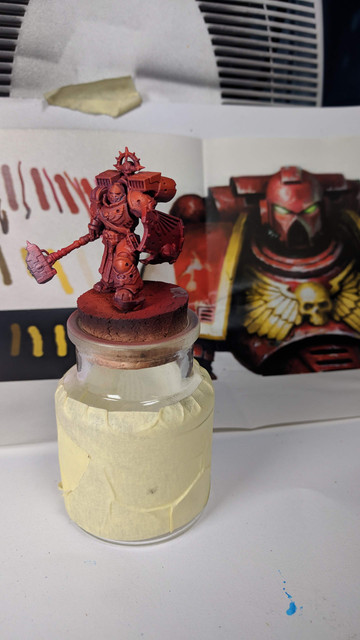 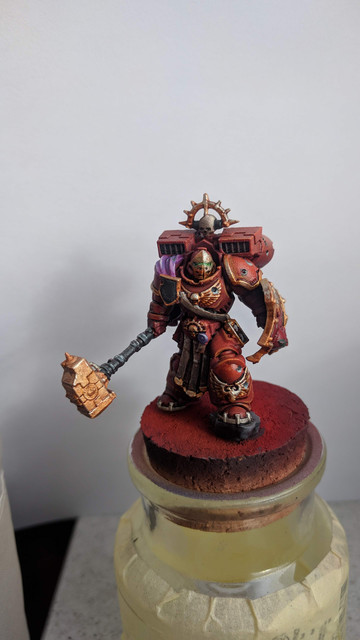 Getting closer, I didnt mind the grain as its not going to see a table, just a test model. 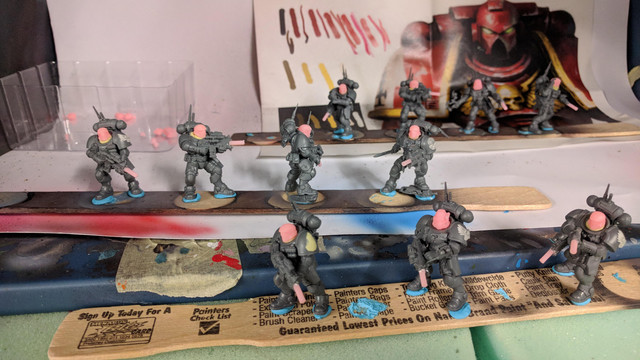 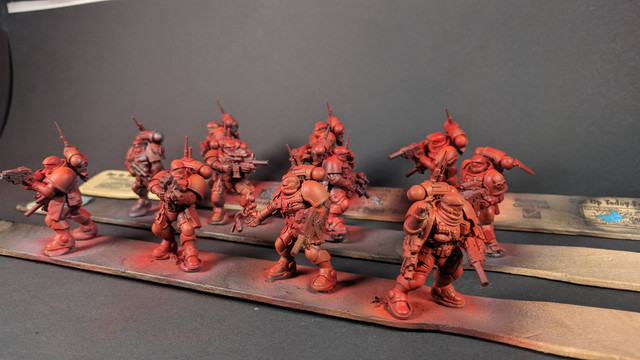 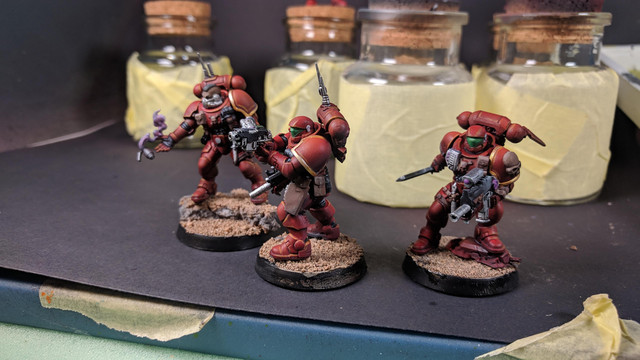 Ok, here we go! Lets run with this and see where it takes us.

So, for now thats all that I have done. But there will be more of this squad when I wrap it up. Ill also try to get some videos out of the painting process to go along with all the images.

Until then, thanks for looking!

Looks cool, I like that smash captain(?), looking forward to seeing where this thread goes

Hey guys, thanks for stopping by and endgaging! K0nahrik, it is indeed a smash captain. Hes one that I 3d printed to use as a test model and wont see the table since 0% of it is GW bits. Soul, always get to get some blood thirsty "loyalists" out there isn't it.

Managed to get these guys finished up. Pretty pleased with how the color scheme came out. Im sure that itll adjust a little bit as time goes on but its a great starting point. 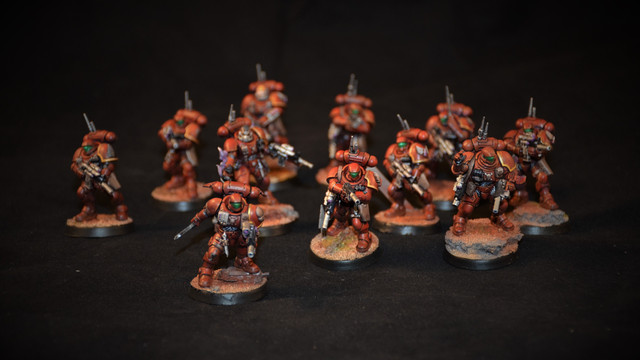 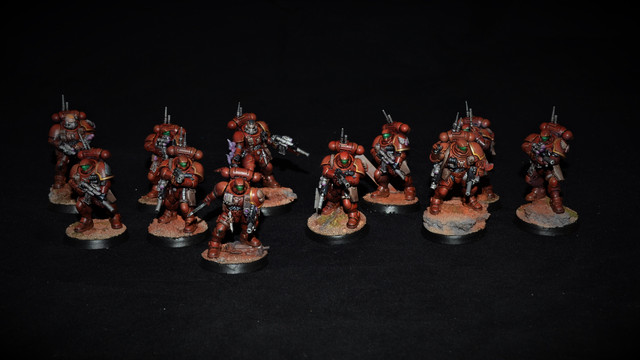 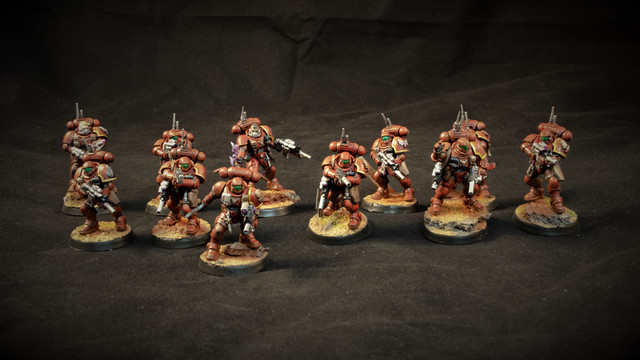 Nice to see a cousin on the work! Good looking so far.

Where'd you get those helmets? Some 3D priniting? No harm in a little Halo Spartan vibes

Barrel extensions are also nice, although their inner diameter seems a tad too small for the size of bolter rounds we usually imagine.

Keep up the good work

Always good to find a brother in the battle!

I grabbed the files off Thingverse, I had to modify it a bit as most are cosplay helmets that don't print out well at this scale. The Suppressors came from there too. I also find the interior diameter to be a bit challenging but I was worried about how thin the resin could go before it split.

Absolutely, this is just the beginning!

The Dreadnought approaches, blood thirsty and with huge claws! 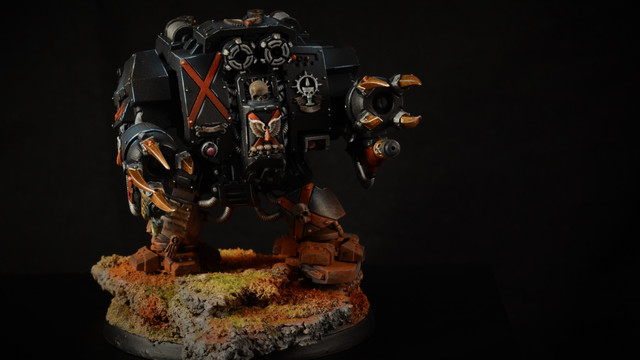 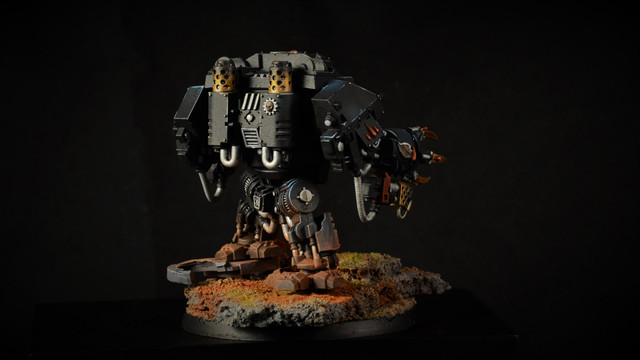 Just got a video finished up for my Death Company Dreadnought.
Im still fairly new to the video editing side of the house. Any tips or tricks you guys have for that would be awesome.
https://youtu.be/SkzTaGJ8GTw

Got a little more work done. It's going to be a heavy bolter predator eventually. Gotta keep those fragile tactical boys safe. 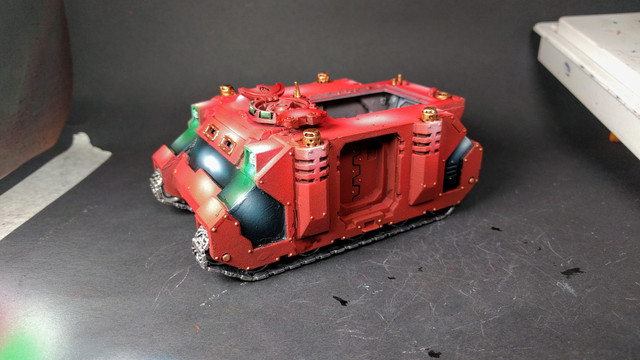 I'll have some finished pictures of the razorback up soon.

The next model in the line is Mephiston. I love the model but hate the pose, so a little hacking later I got here. Still some green stuff to go. 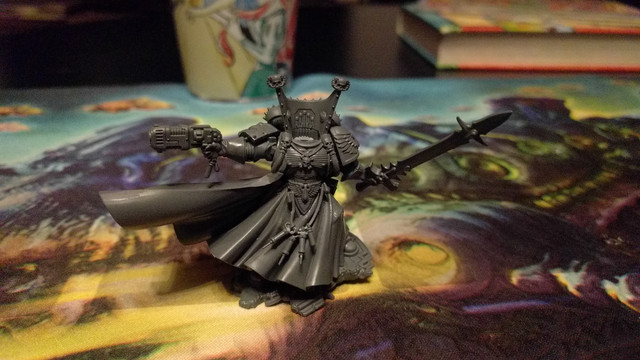 Got the Razorback into the photobooth for some quick pics. Lots of prep work that I should have done to smooth out its rough Ebay edges. Sometimes preowned stuff is cheap for a reason I guess lol. Anyway, it looks amazing at three feet on a tabletop so Im happy with it. The turret is a 3d print, which I think came out pretty good. The original one it had was mangled worse than the rest of the model. 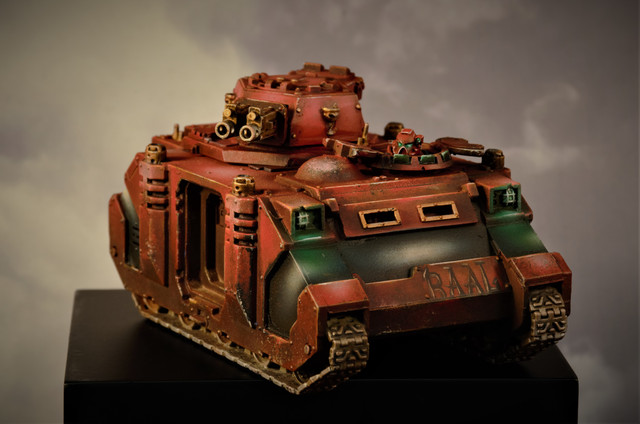 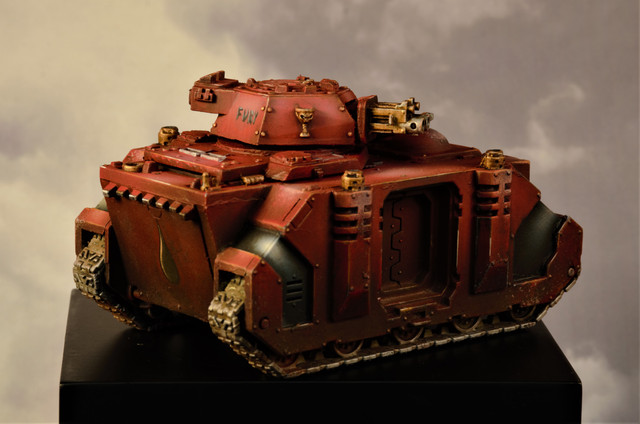 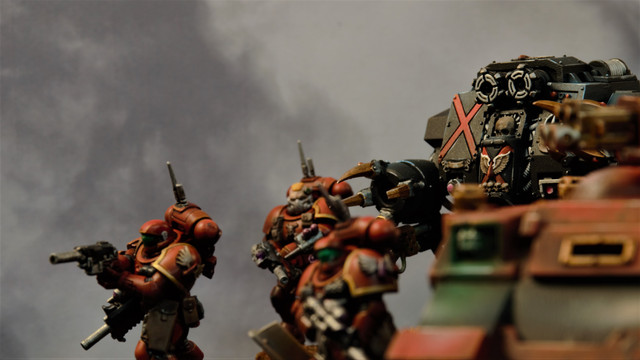 Great stuff, red and gold is the most tasteful colour scheme in 40k

"The Black Library is not lore."

And this is as far as I've made it on Mephiston. 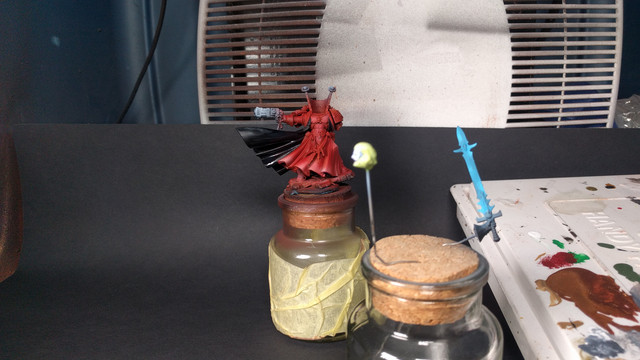 Nice take on the Mephy's pose!

Personally I'm not a fan of white highlights on red without any warmer transitions as they tend to give an overall pink look afterwards. Interested to see here this will take you, though. Good luck with it

Thanks, the cowl makes getting his vision/sight line a little tough but it's much more gunslinger like this. 😁

I agree about the whites, and they'll end up being largely glazed down into a transition with some being an orange.

great looking army thus far, I was a little worried about the OSL on the Razor back, but after you applied the shading and i have to say it looks epic!! really like the turret too, great swap

Hey Sagentus, thanks for stopping by and taking a look! That Razorback really did look a bit bright didn't it  : )
Andddd…. Im officially on the Mephiston hype train! Took long enough and I could put another dozen hours or so in. But, Im really happy with how it turned out. I reposed both arms and changed the angle that the head sits at, making it at least a little unique. 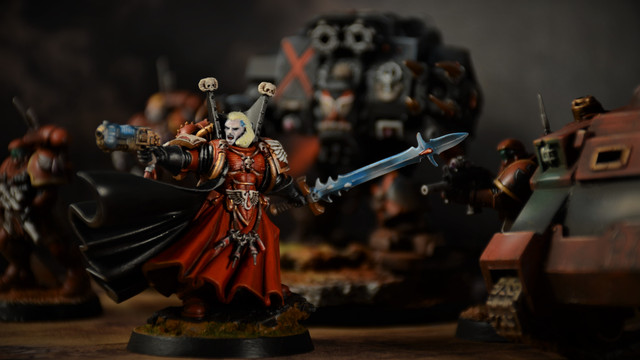 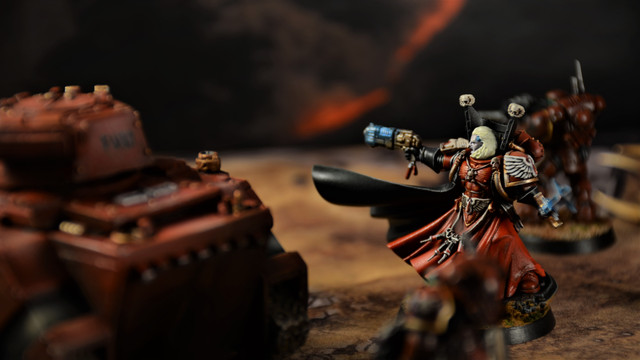 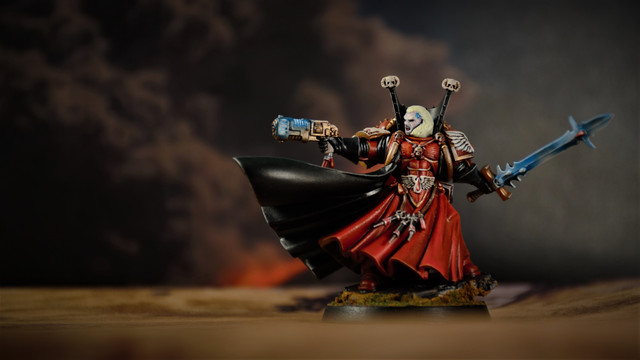 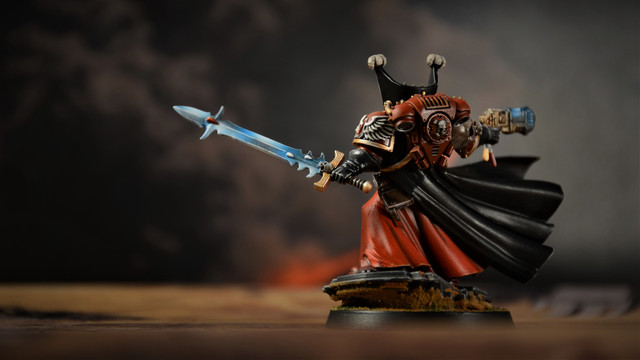 Great take on mephiston! The blue in the skin tone and weapons really works well, black cape reminds me of the old vampire counts - two thumbs up

Sandalphon, that's what I was trying for and I'm glad it hit the mark. Seeing as we're all a bit blood thirsty I figured pushing it a bit more in that direction would be fun.

Awesome painting all round, but I really, really like how you've reposed Mephiston. Enough to make him unique, but it still keeps the flow of the model. Well done!

Andddd we have another set done. This time its some scout fodder. I loved them back in 5th ed, well see if I still love them.

Overall they are a very TT level squad but I really enjoyed how the camo cloaks came out on them. 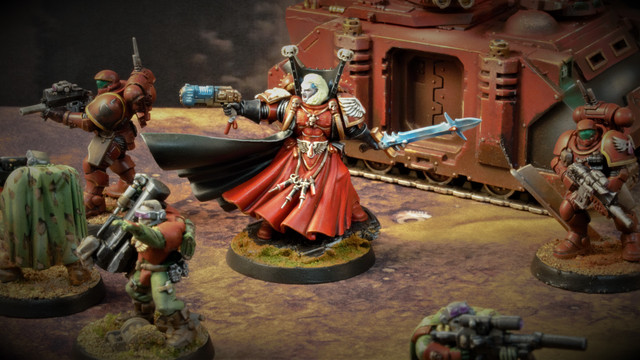 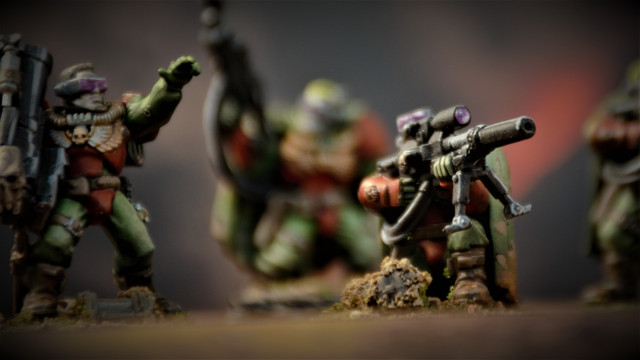 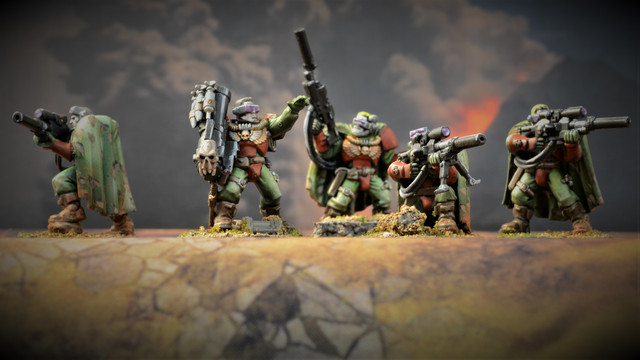