I’d be interested in the community’s thoughts about different sub-classes of Warbringer Titans, and some possible home brew rules for them. Obviously we already have the Nemesis pattern, that stands as a long range fire support titan.

I’ll start off with a conversion that I am going to make a Command Class: The Warbringer-Legate Command Titan
It’ll drop the top mounted cannon and instead have a command/ ranging tower. For the conversion I plan on building a domed tower that will slot into the same spot the quake cannon fits. If I can pull it off, I plan on converting the ammo hoppers to have one or two jet bikes sitting next to the door. Ideas for home brew rules might include command check re-rolls, and potentially giving bonuses to nearby knights and titans. Fluff: it would serve as a mobile command for large engagements and long campaigns.

Would love some feedback

You had me at "warp missile battery"

I'd like a more dedicated melee titan for my Khorne-fueled scrapcode-induced charges.  Something with a bonus (or compulsion) to charge orders?  Maybe a couple of melee arms and a Warlord plasma cannon on the back?  I'd love to see Warlord arms mocked up on a Warbringer *hint hint*

Possibly one that replaces the heavy weapon with an overlarge shield generator that can merge at larger distances. The large platform could also be used for some form of boarding siege tower/howdah.

I think the idea of a Command Titan is an excellent one.

I was looking at some possible rules for a Capital Imperialis, and one of the ones I really liked was the ability to support Command rolls within a certain radius and/or arc. There are other possibilities, but that's the one that really stuck with me.

...and it's a modeling gold mine. The interesting things you can do with the "command" concept on the model are legion.

An imperatir should give +1 to command checks or something

Possibly one that replaces the heavy weapon with an overlarge shield generator that can merge at larger distances. The large platform could also be used for some form of boarding siege tower/howdah.

Two melee weapons and a big ass carapace shield generator to help it get across the map! Or...drumroll...jump jets..

Moderatii: we’re caught in the open with no cover, they’re charging weapons!

Princeps: where is our escort?

Princeps: so be it.
Moderatii: what are your orders, Princeps?

Princeps: power to the jump jets! Death from above!!

My idea is to build a Warbringer ARV. Replace the quake cannon with a big crane, featuring either a grabbing claw or a magnet. Give it some kind of manipulator or maybe a laser cutter-welder for an arm. The AA guns could remain, or be replaced with ammo loading cranes.

The new crane could be the right size for that, do you have one yet?

I've been trying to figure out a non-Nemesis version of the Warbringer - considering the Nemesis designation indicates a Titan that's been modified to carry a heavier-scale weapon, reverse engineering it to what I'd presume to be the 'standard' Warbringer Battle Titan seems a fun project.

I'm still pondering what armaments would be appropriate to make it less over-gunned than the Nemesis but still a power level above the Reaver - swapping the carapace Volcano/Quake for a pair of Warhound-grade weapons would work but seems kinda boring, but another option I've been toying with is redesigning the carapace and arms to mount 4 Warhound-grade weapons. Maybe I just like the visual of a Warbringer armed with 4 dual turbolasers, but re-engineering the front armour to make it more aggressive looking, shifting its role to more of a brawler (given the shorter range of most Warhound weapons) might be cool.

IHF, I actually really like a brawler idea. If it was done that way, I’d allow for a CCW though (Maybe make that the only reaver weapon it allows). If it allows all warhound weapons, I could totally get behind a Warbringer that runs with twin lasers on top, a Ursus claw on an arm and a Pimp hand for the other. As far as modeling, I’m not sure how I’d do it, maybe reach back to the old AT turtle shell Warlord...?

In terms of my crane idea, I don't think it would be like the ones on the terrain sprue - though it could be. I'd prefer to try and do one of those extendable mobile cranes that you see. So sort of a box section thing that extends out.

I'm not sure what it should have on the end. A big magnet would be kind of cool, and a nice homage to all the magnets in my army. Maybe I could even model it carrying a wrecked warhound. That might be a stretch.

What about one that replaces the top mounted cannon for a big wrecking ball?

I did think about a wrecking ball. I think it'd have a couple of issues though, like the risk of bashing in its own head. Also, if you want to dismantle a building, a quake cannon is a pretty good option.

I did think about a wrecking ball. I think it'd have a couple of issues though, like the risk of bashing in its own head. Also, if you want to dismantle a building, a quake cannon is a pretty good option.

LOL
When I was a kid someone got me this contraption you put on your head with a basketball backboard and little foam ball on a string where you tried to gyrate your neck in a way to get the ball into the hoop.


See I was thinking about this. Having a rack of 3-4 warp missiles on the top. It would be limited to the number of missiles, and it would serve in a similar role to the regular warbringer.

What about some anti-orbital weapon, taking out atmospheric Titan transports and such?

In Titandeath, there were warlords engaging frigates and cruisers in low orbit while the reavers and warhounds targeted incoming troop transports.

In Titandeath, there were warlords engaging frigates and cruisers in low orbit while the reavers and warhounds targeted incoming troop transports.

So I need to read this book, it sounds crazy.

One of the things I considered last night with respect to the Warbringer chassis is that it'd be a good Mechanicus test bed for exotic weapons.  The carapace mount can handle the biggest Warlord arm weapons so it would be a logical test platform for things like graviton, EMP, or forbidden technologies in an actual titan chassis capable of front line action.

It'd be neat to see experimental titan-scale weapons like the plasma mortar:

Or the sonic destructor:

Or the darkfire cannon:

I love the idea of little Mechanicum tanks trailing it collecting data and magos' wriggling their mechadentrites in glee.  I could even see 3d printing or converting things like this for custom missions.

That's a great idea. I agree it would make a perfect test bed platform for whatever insane stuff the Admech could come up wtih.

I agree as well.

Okay, so I've been thinking some more about the Battle Titan version of the Warbringer that I'll be designing, and I'm pondering the best ways to differentiate it from the Reaver/Warlord.

At this stage I'm pretty set on keeping Reaver arm weapons and mounting twin Warhound guns on the carapace (like the lighter Warlord carapace weapons) - as I want it to be more of an aggressive-looking 'bruiser', those Reaver arm weapons'll include the fist and chainfist options, but I'm thinking of having a slightly different selection of carapace guns. Namely, no dual apocalypse launchers, as they typify longer-range builds and are a classic Warlord staple - instead I'm thinking of actually giving it the option for twin plasma blastguns (alongside the vulcans & turbolasers) which would limit the range of the carapace weapons and make it potentially pretty scary once it hits mid-range.

I did consider having the option of twin carapace ursus claws, but attaching them that far from a relatively tall titan's centre of gravity wouldn't be a particularly good idea - aesthetic-wise, I'll have to work to differentiate its silhouette from the Warlord's, especially as I'm just gonna port the compatible carapace weapons straight across, but I'm curious about designing an interesting way of mounting the head higher on the torso (one of the WarCom articles mentions that the Nemesis mount specifically forces the Warbringer's head to be mounted lower).

On a slightly different note... Can't help but think of this: 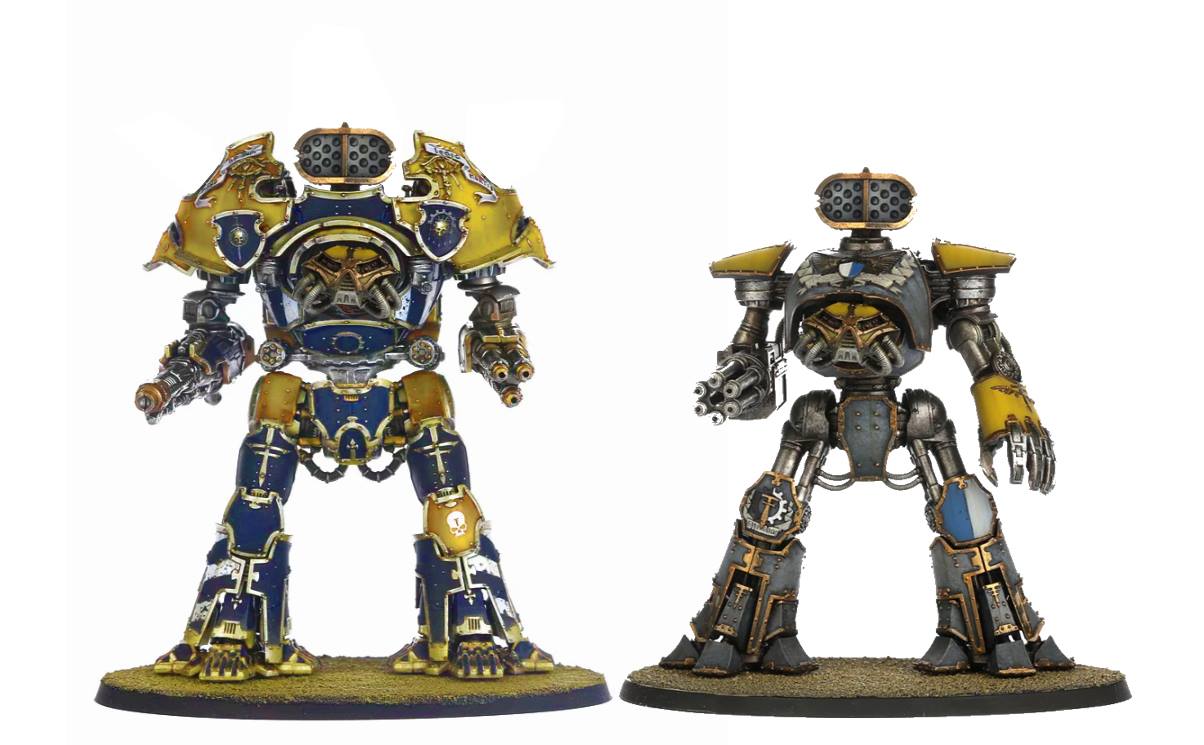