Figured this might be of interest to a few frater here - 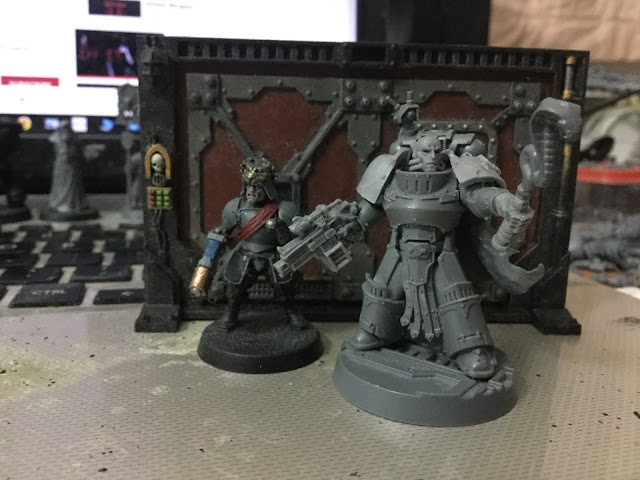 An Alpha Legion Chaplain based on the excellent concept-work done by IHF (if you haven't checked out his Heresy-era design thread, it's pretty amazing).

Still could use accessorizing with a holstered pistol and grenades, etc. - but otherwise, pretty much done.
The crozius is ... a bit odd, now that it's attached - but I couldn't think off-hand of any other serpentine parts I had about to use for it. [standard-topper from the Dark Elf Corsairs was an option .. but not one that was around where I could see it in the general bitz-hoard].
Here's IHF's original for comparative purposes:

An XXth 'Redactor'  Chaplain. [well, I'll possibly head my own direction with fluff considerations due to a somewhat heterodox approach that utilizes a lot more Germanic conceptry ... and in this particular case, certain points around Grimnir - 'Masked One' :P ; but the visual is most definitely aligned with IHF's production, at any rate]
Now, he didn't go into much detail about wargear, so I made my own inferences. Could still use accessorizing with a holstered pistol, grenades and vials and pouches etc. And the Crozius piece ... goes with the Old Norse pun-value around 'hooded one' aforementioned, as well as a Jormungandr reference - large 'wand'/staff.
I felt that a scoped bolter went with a hanging back and precision shots where required ranged engagement modus operandi; and while the Deathwatch Mk.VIII back-pack might be looked a bit in askance at for Heresy-era purposes ... the Alpha Legion have all sorts of technological resources at their disposal - and it can be said to be a modified Mk.VI or Mk.IV pattern; while the main reason I went for it, the armoured lense, seemed to connote the kind of officer who'd have the entire battlefield under surveillance etc.
Oh, and I further 'tweaked' IHF's original design with a scaled cloak, because dapper. And also because it actually makes my method of truescaling [pun .. retroactively intended] rather easier .
In terms of the truescaling, Primaris arms are great, but I couldn't find *quite* the right one for the other - so went with the nice thick knight-like armour ones from the Ravenwing Command. Hands are also often a bit of a pain, because full-size primaris arms .. go nicely with FW terminator gauntlets. So I think the hand holding the Crozius is ... either a Salamander or Iron Hands terminator hammer or axe gripper.
Gosh, two actual Alpha Legion [other one's up on the Vox Stellarum Heresy-thread]. I might have to do a few more now ...
... and try out that contrast paint to see if i can finally do a scheme ...