40 replies to this topic

Hmm, I’m using SW rules for a custom Marine army, would I be allowed to join in?

My DreadWolves are a Space Wolves Successor , I cant imagine why we wouldn't welcome yer HQs to be displayed in these halls.

Hah do it at your peril, share enough mjod with this crew and before you know it...

I'll share mine if you guys don't mind. They're all wysiwyg

My Battle Leader Ubbe. Old and weary and frustrated with his physical weaknesses he crossed the Primaris Rubicon by choice, he believed that he was strong enough to pass the spiritual and physical test the procedure puts onto your body. He lives a very Stoic life for a space wolf.

Rune Priest Hagrid. I painted this guy and then somebody online pointed out he looks like Hagrid. Since then I couldn't forget, i'm not even really keen on harry potter but I just can't unsee it. This guy is a total weirdo.

Wolf Lord Kraigen (Not actually a wolf Lord. Just a wolf guard in my headcannon but I run him as my wolf lord on the table). He crossed the Primaris Rubicon after taking a serious injury and has kept his Beaky helm instead adapting it for his armour. Enjoys a good party and a fight.

Wolf Priest (Done entirely using contrast as an experiment. I should highlight him with russ grey but the current Wolf Priest rules don't really inspire me.)

Shameless plug for you to check out my channel - 2d6 40k news
https://www.youtube....7QfyFt6rCWizTWA

FOR RUSS AND THE ALL FATHER, AND MJOD!

Brutal, I love it!

Shameless plug for you to check out my channel - 2d6 40k news
https://www.youtube....7QfyFt6rCWizTWA

FOR RUSS AND THE ALL FATHER, AND MJOD!

The secret is beating the crap out of everything with a sponge.

The secret is beating the crap out of everything with a sponge.
Also Mournfang Brown.

Is that produced from the crap you beat out of them?

Wolf Lord with the other two HQs of my current list. The Rune Priest is the roughest. Thinking of repainting him.

Fluff for Svarnir can be found in my Drakeslayers thread (link above the image).

The old Wolfpriest himself. I give you my take on Ulric the Slayer

Thought I’d drop my painted HQs in here. Painting for these mostly done by Gorkas Miniature Painting, I redid the fur and added a few other touch ups to suit my personal taste.

Vorek Gnarlfist, Lord of the Iron Wolves, after crossing the Rubicon. Not a legal load out by any means but I figure he could be a Gravis Lord in a pinch. Little bit of self made fluff for Vorek and his weapon since we don't have much.

Vorek, once known as Warblade, is called Gnarlfist for the massive, master crafted claw he bears into battle. The Gnarlfist is an ancient relic of the Fang, so named for the 3 claws made of gnarled bone which protrude from it's knuckles. The claws themselves are of unknown origin and are razor sharp and nigh unbreakable. The addition of matter disrupting power fields to each bone makes it a truly fearsome weapon. It's history dates back to the early days of the VI Legion and heroes bearing the name of Gnarlfist can be found throughout the sagas sung by the Wolf Priests and skjalds of the chapter. Vorek was given the Gnarlfist upon his elevation to the Wolf Guard by Osric Three Fists, lord of the great company before Egil Iron Wolf. He has carried it since that day, formerly when in his terminator armour and now as part of his MKX Gravis plate as an ascended primaris marine. He also carries a power axe that has been his since he was leader of his previous pack. Named Foe Splitter, it has a storied history of its own. 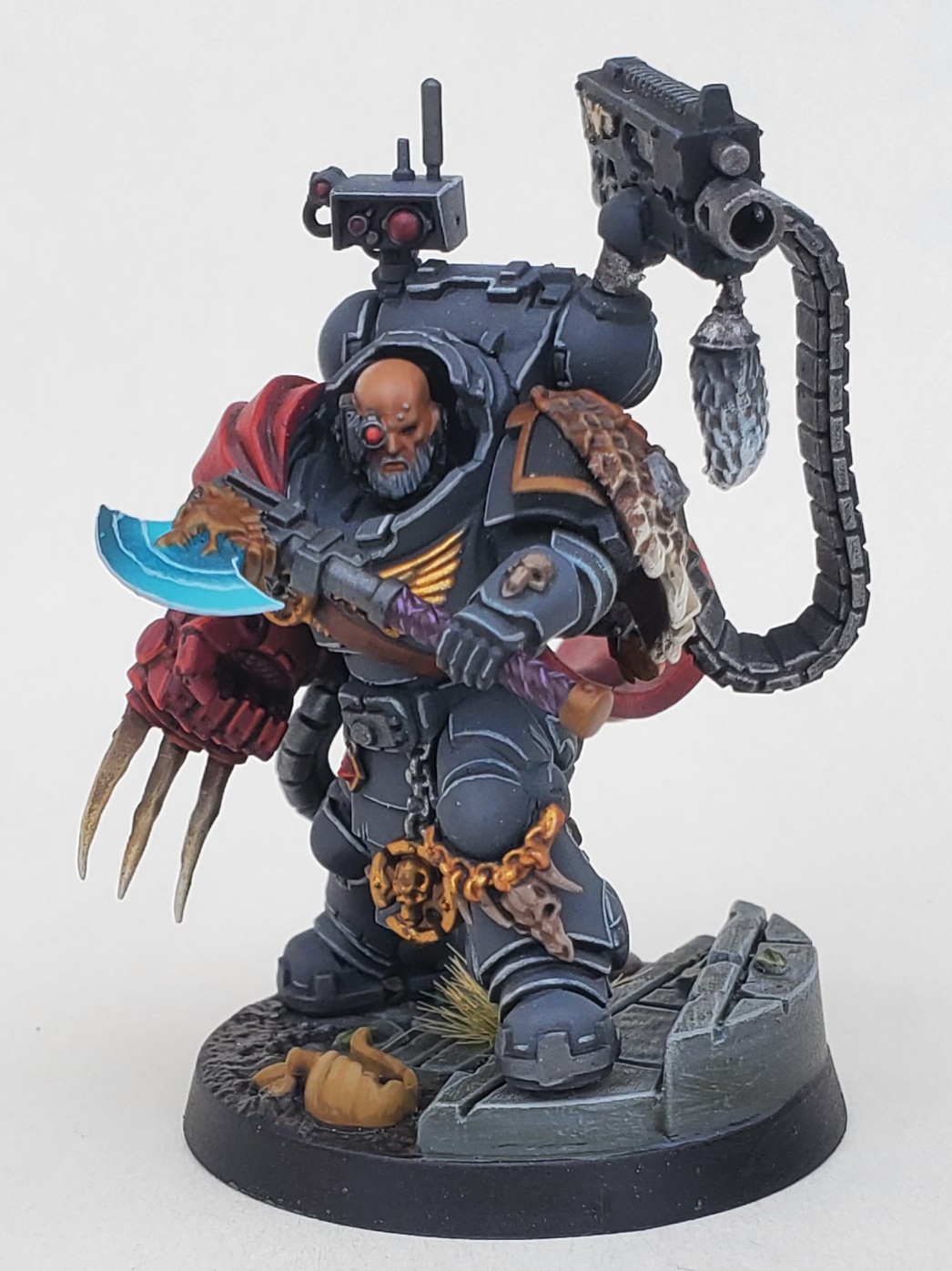 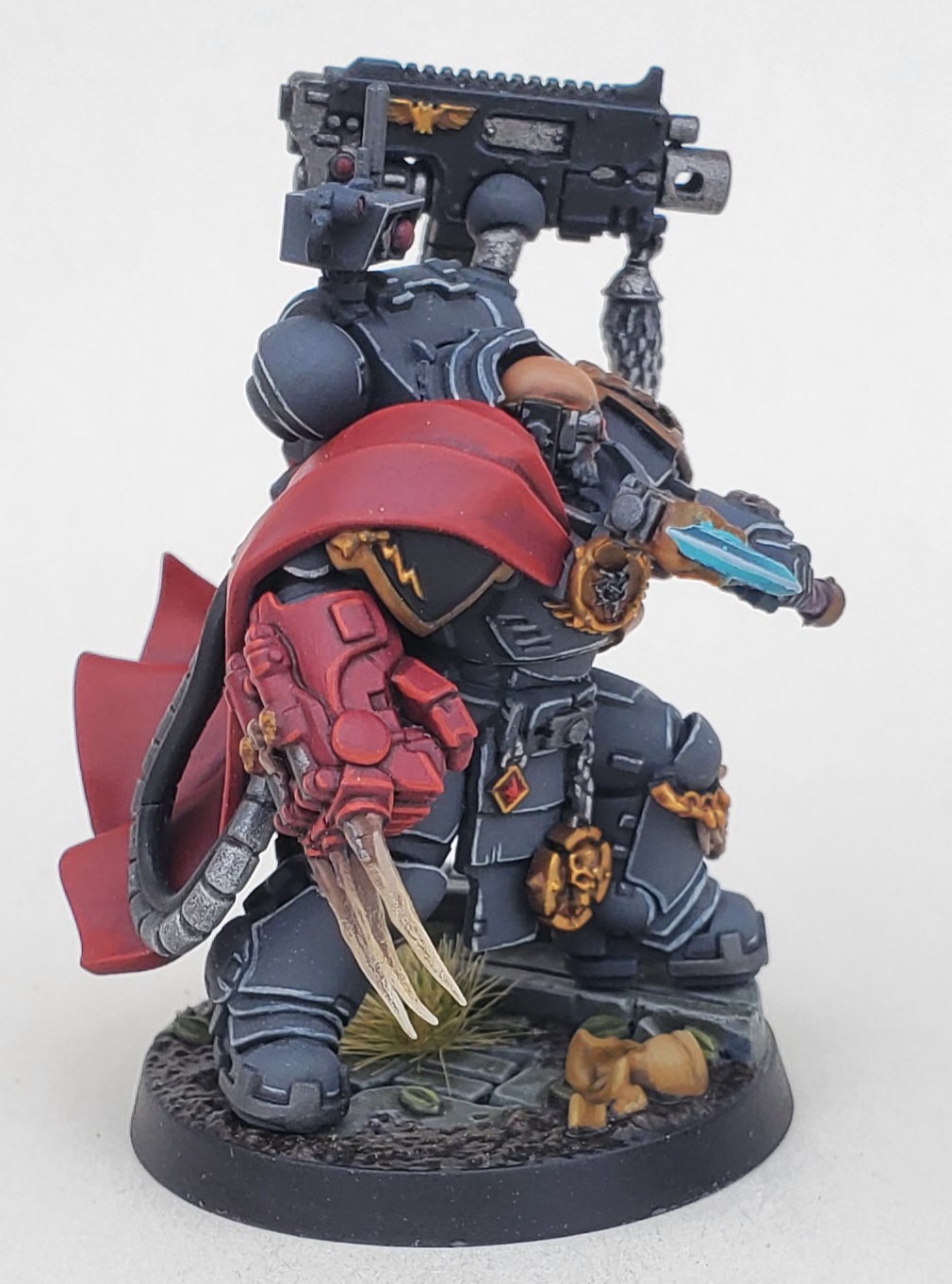 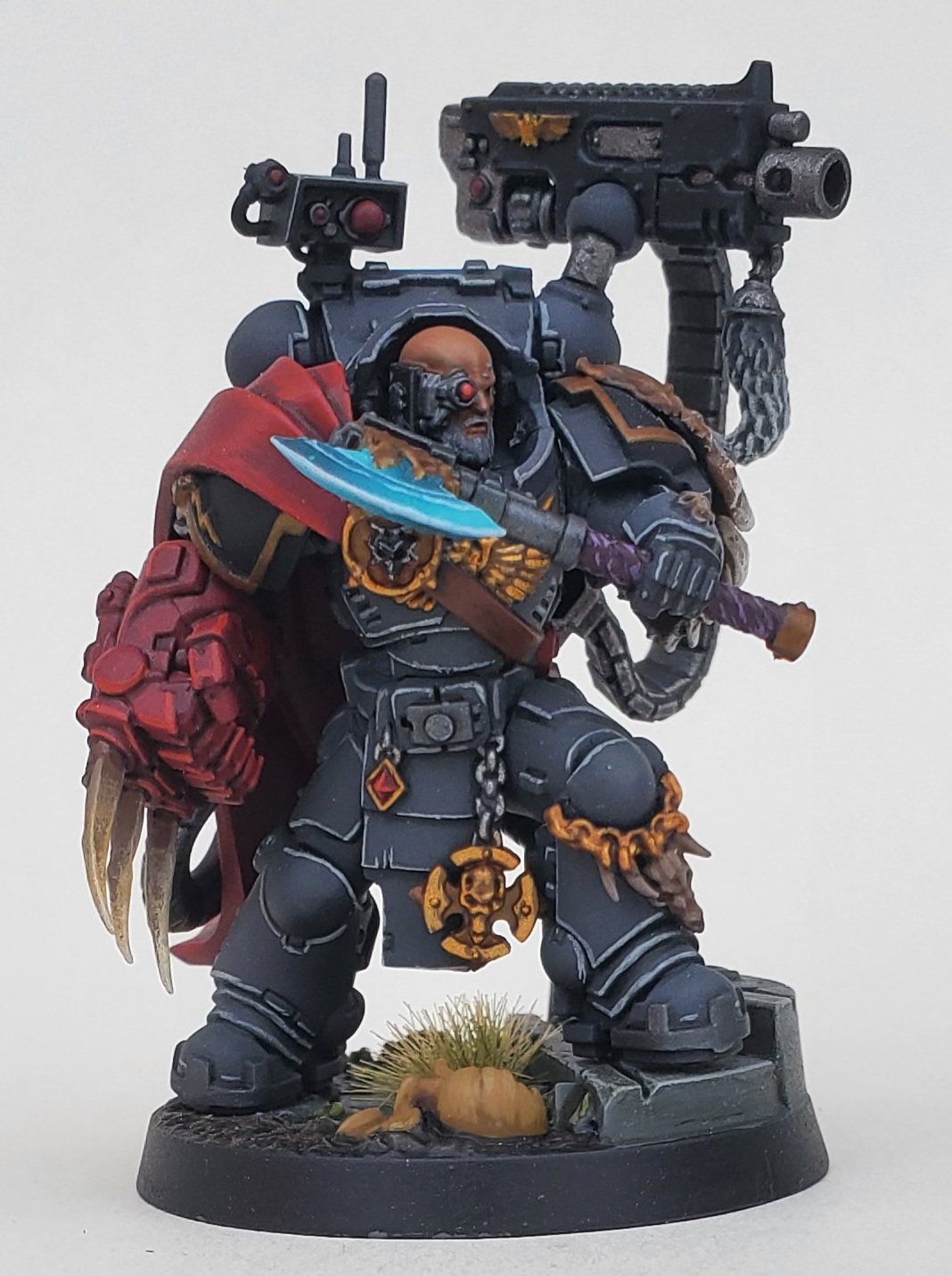 Battle Leader with Indomitus load out. 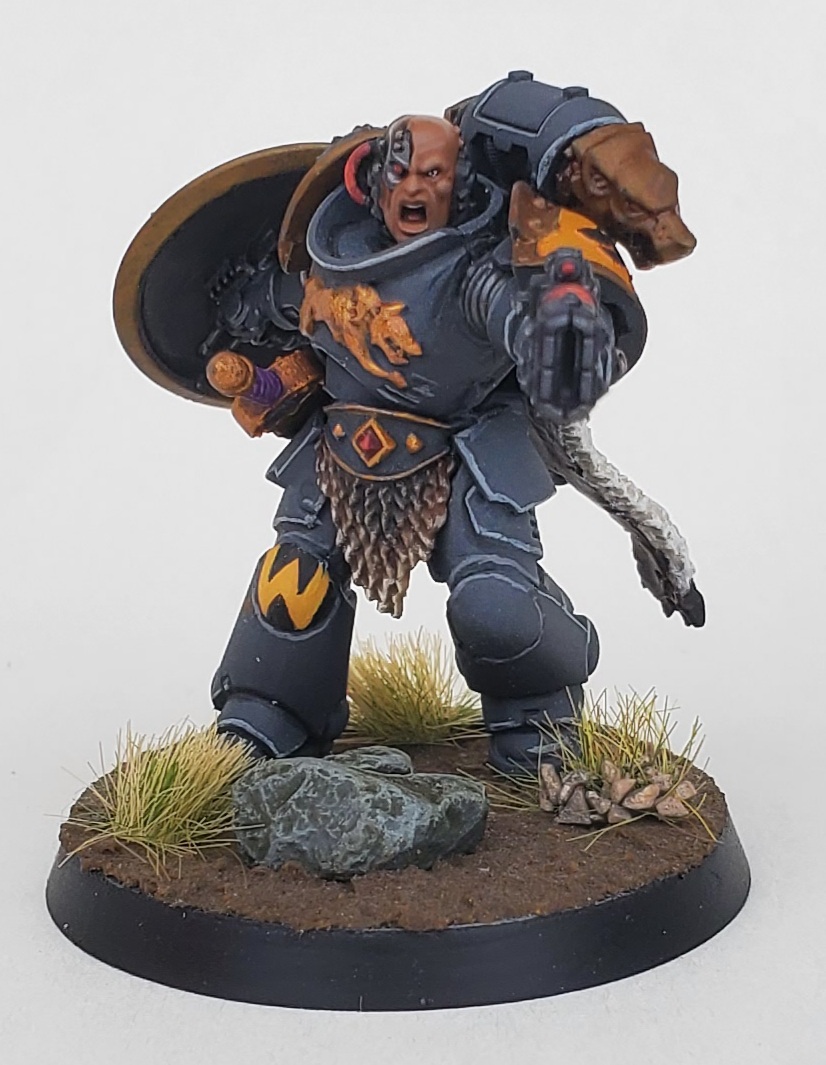 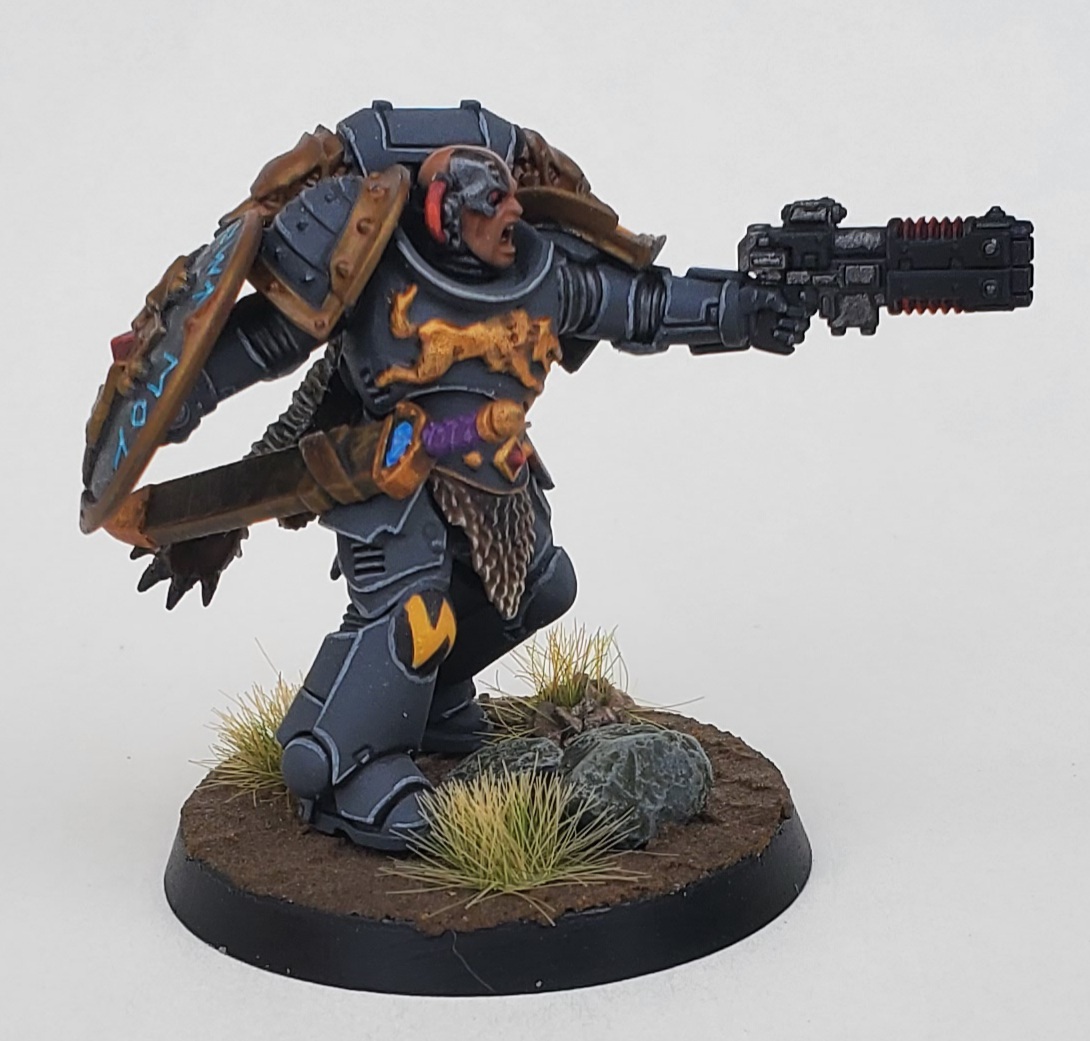 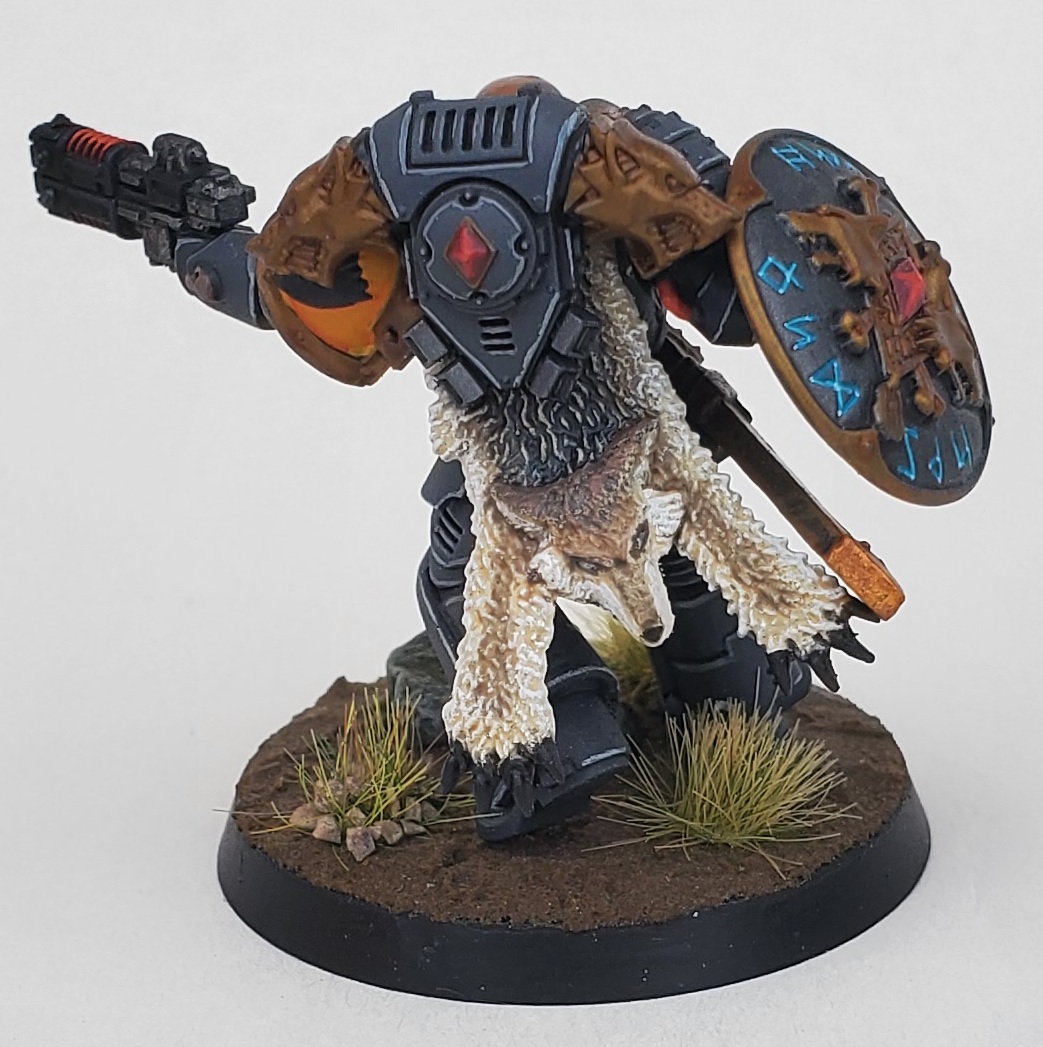 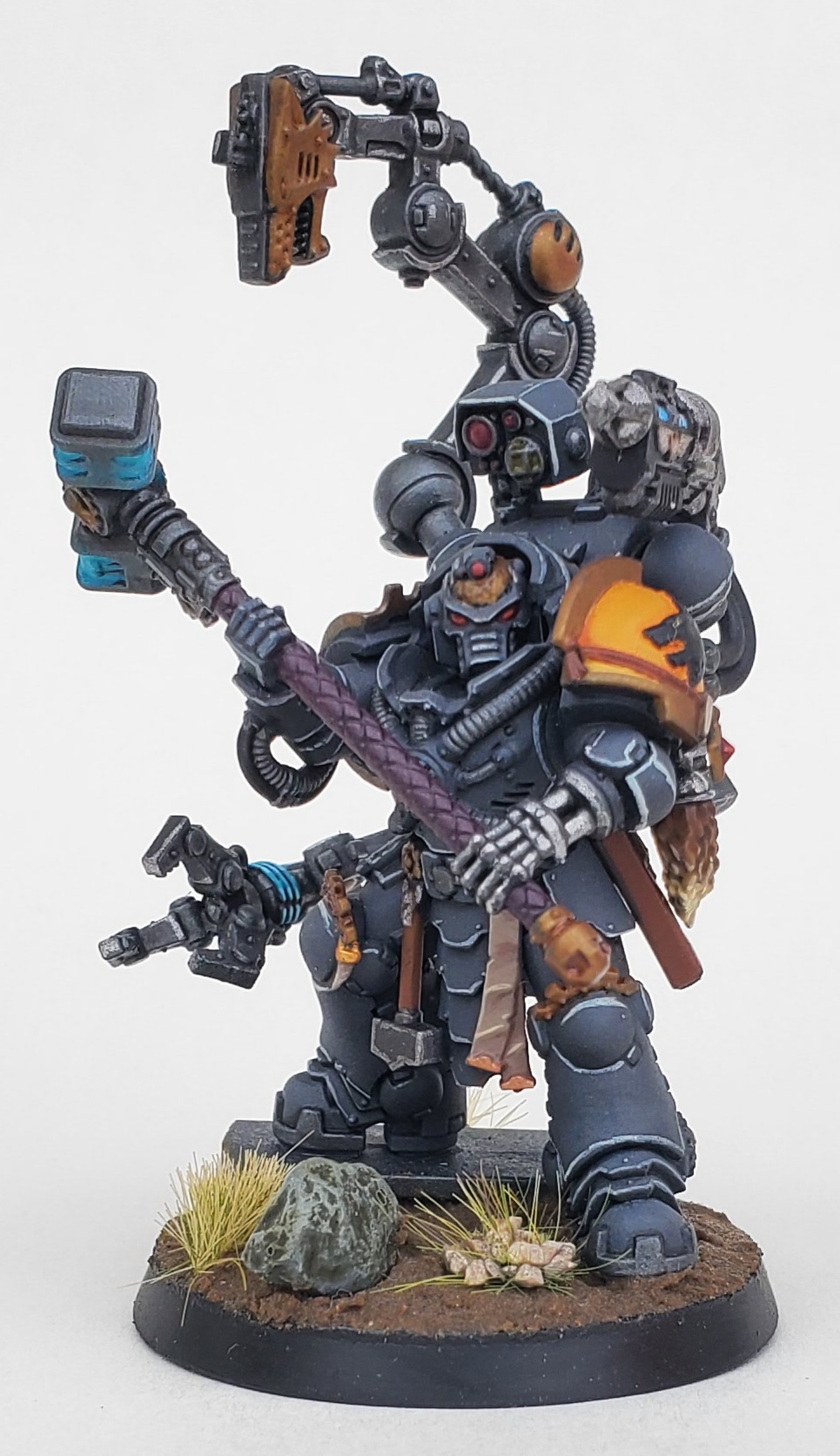 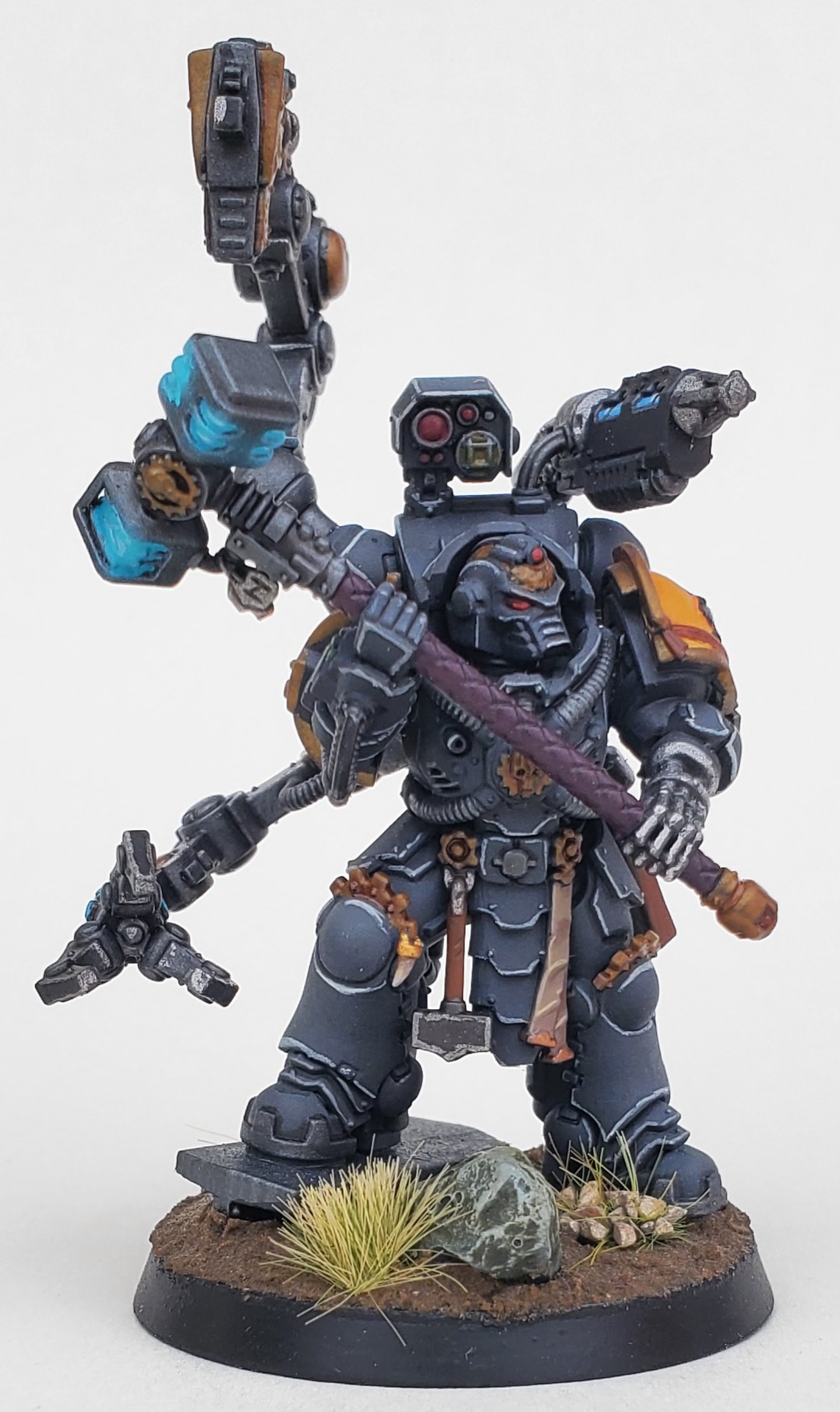 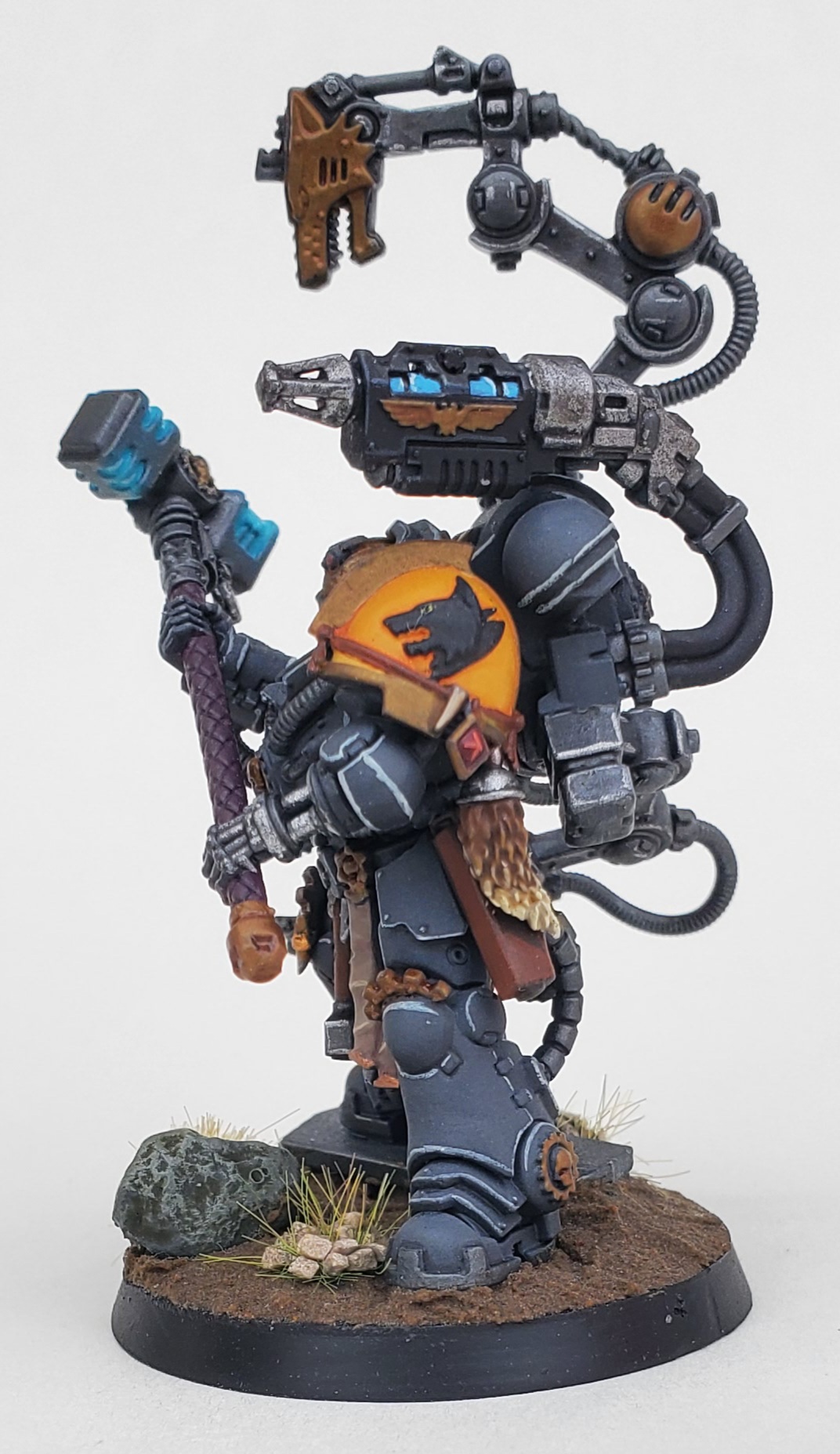 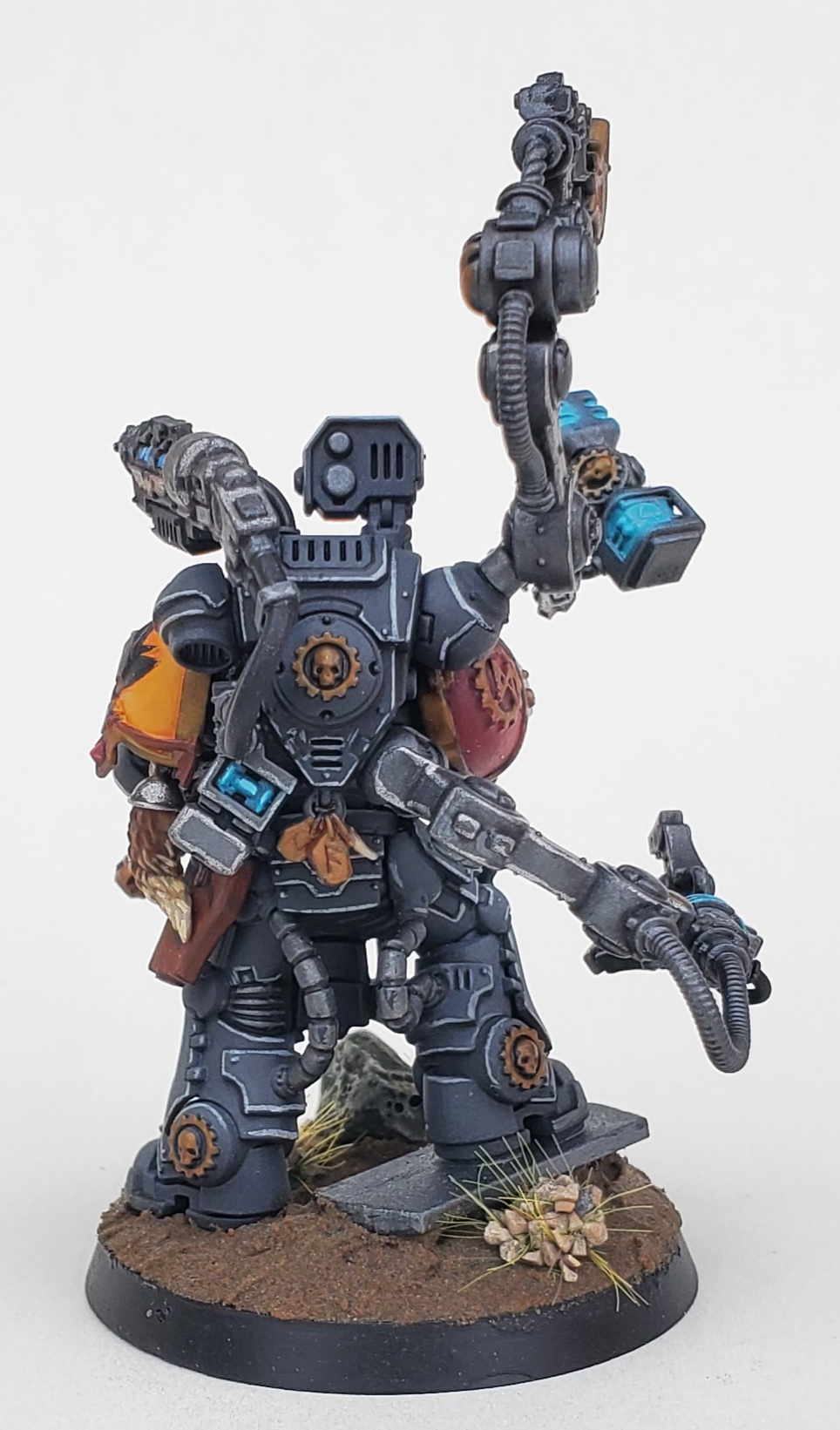 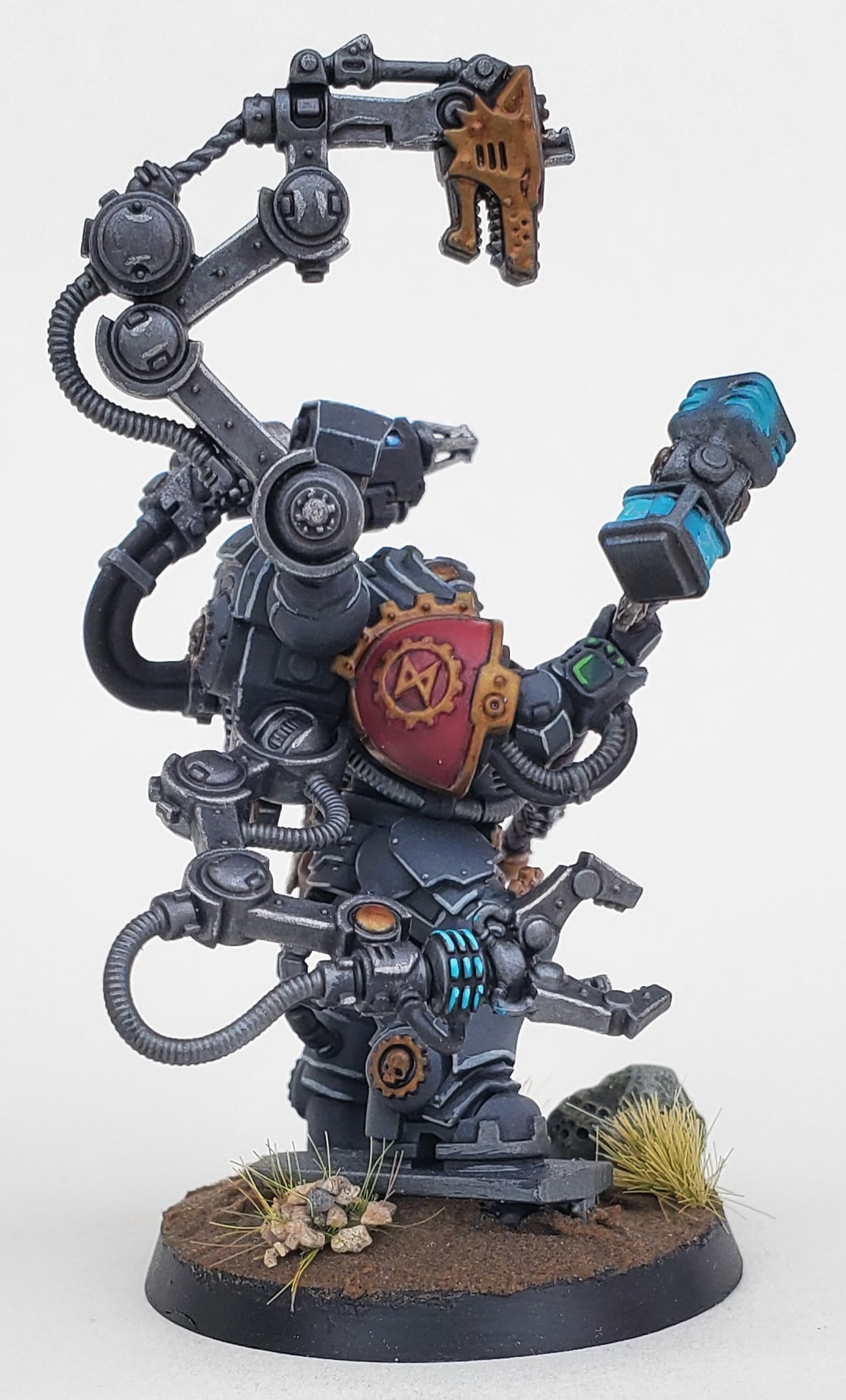 Ah, just realized I can now legally post here as well 😃. Why not, here's my Ragnar: 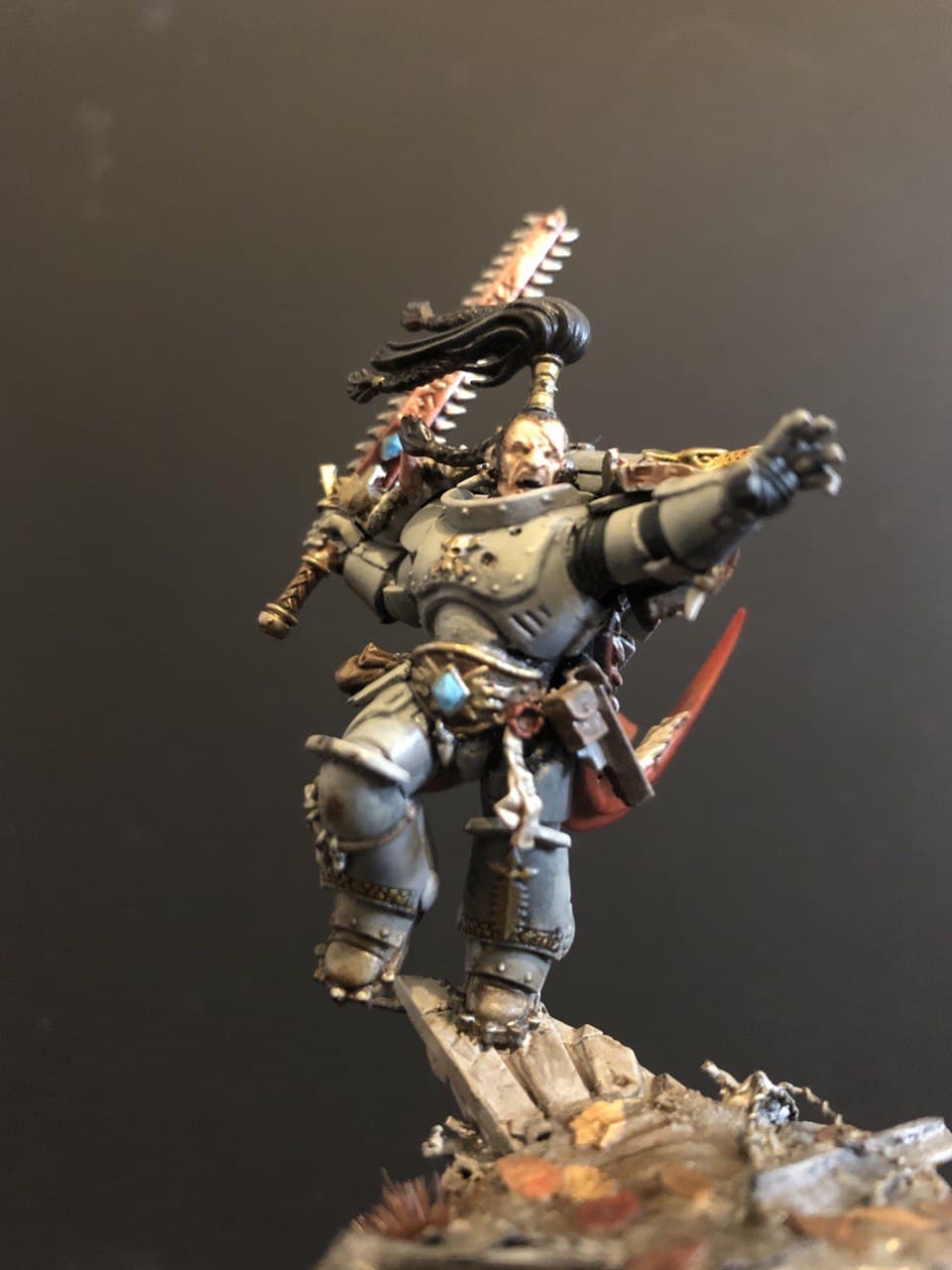 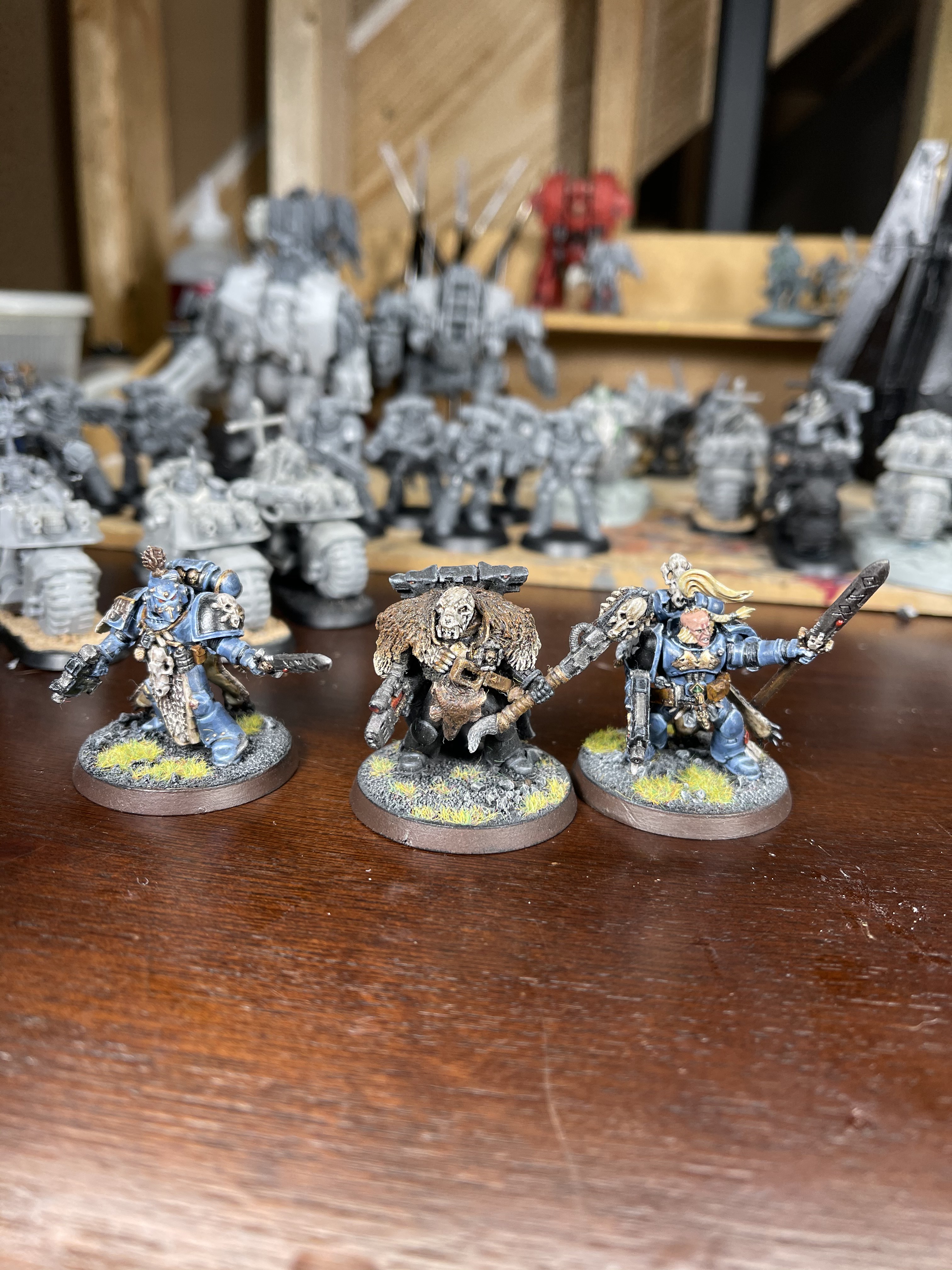 "This is not the first time you've been left to fate. I can see it in your manner. It takes something from you doesn't it? Being deserted hollows you out and leaves a void inside. People might say that it hurts, that the psyche aches from the wound. It's not true though. Abandonment does not leave pain. You wished it did because that would be better than the truth. It leaves nothing. Not hope, not pain, not forgiveness."
Back to + SPACE WOLVES +