Unit of the Week: Archons

Welcome to Drukhari "Unit of the Week" series.

What are you thoughts here folks? How best would you use Archons?Over to you. 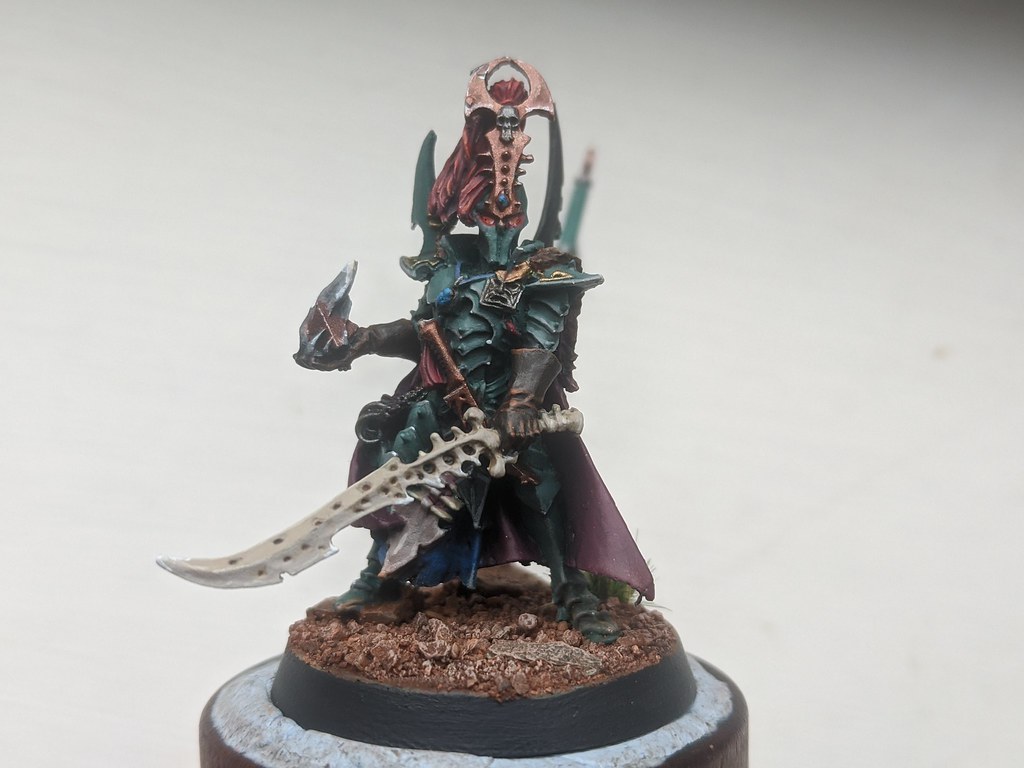 It's taken me a while to respond; there are soooo many issues that influence decision making about an Archon that actually aren't related to the datasheet, that it's hard to assess how good the unit is without also venturing into the surrounding rules.

To talk about Archons themselves:

The Kabals are the shooty parts of the army, and you need shooty, so that means you need Archons.

About the other stuff:

So what I WANT is a bunch of Archons, each leading their own patrol, riding around in a Raider kitted out as a mobile firing platform for Kabalite heavy weapons.

But because of all those extra rules, it's not efficient or wise to field patrols, and if you share a raider with troops, you don't get to take as many heavy weapons. Since the maximum number of Court models you can take in a detachment is 4 anyway, it's a better choice to field a battalion where one Archon rides a Venom with 4 Slyth or some combination of Slyth and Medusae and the other is on foot with a big Squad full of Heavy weapons.

As for Obsessions, I lean toward Obsidian Rose- again, I'm trying to specialize my Kabal for shooting, so extra range is the bomb. I know, everyone love their Agents of Vect strat, but it's both expensive and somewhat random. Remember that big squad full of heavy weapons? Well, Failure is not an Option really does a lot for them, especially combined with the extra range; it always works to the best of its capacity. Obsidian Rose also lets your Venom Archon wear the Armour of Misery- the 3+ will help a bit once the Shadow Field craps out. Finally, both his melee and ranged weapons will do +1 damage if you take the Obsidian Rose WL Trait, given that his Artefact is armour.

I like to use Alliance of Agony, but the composition of my armies is almost always determined by campaign events; if my Coven hasn't had the opportunity to come to arrangements with the Kabal by the time the realspace raid happens, well... they don't get to go. In any battle where I can use Alliance, I do. What this does is prevent opportunity cost from being a factor when deciding whether or not to give your Archon a WL trait.

I usually take the multiple artefact strat in most other armies, but DE artefacts don't appeal to me as much as some other armies. It'll be a cold day in hell before I take Djinn Blade, for the same reason I don't really like plasma: my opponent is supposed to be the one who hurts me, not me. A few of the other items are single use! Who wants to burn a relic slot for a single use of anything?

That said, the Armour of Misery isn't a fabulous Relic- I prefer Parasites Kiss, but it wouldn't benefit from the WL trait or the Obsession. As for giving it to the other Archon, that would be a waste too, because he's meant to work at range; it's better in the hands of a Succubus. And if I went the full 3 points, the third artefact would likely go to my Haemonculus.

I've been thinking about my Archon builds and I agree that there's a few stand out choices. He's got some good stats but S3 is the issue. I did consider the Huskblade as a decent option to hit a bit harder but in most cases you're probably going up against T4 or higher so poison weapons are fine. Parasite's Kiss is a strong choice, and with the Soulthirst Warlord Trait you could be recovering wounds nicely.

That said, if the Shadowfield is gone I'm not sure how many situations your Archon will be in where that's not already more bad news than you can recover from. I suppose it is fitting that he is better as a bully unit to chop down infantry and the like? Generally I think the plan is best to keep them modest and pick their battles well, unless you can supplement somehow such as the Armour of Misery.