Night Lords Warband and Chaos Lost and the Damned

While I do dabble with loyal forces and the Inquisition, my true love lies with Chaos.
My first 40k army, 12 years ago, was the  Death Guard- back in the day one had to make one's own mutations and conversions and spilling guts using green stuff.
I have recently fallen in love with the new Chaos Marine models.
I think they are amazing and so much better than what we had back in the day.
And the Start Collecting box was just too good to ignore- I just love the models for the Greater Possessed and the Master of Possession!

So I decided to again pledge my soul to the Dark Gods.
And since the Nightlord Trilogy my ADB is my favorite collection of Black Library books, I decided to go for Nightlords.
At least a warband that is heavily corrupted by their long time hiding in the Warp.
And maybe leaning towards the Khornate side of things.

So, to start things off, I got the following:

- The Start Collecting Chaos Space Marine box
- Haarken Worldclaimer, the Herald of the Apocalypse
- a box of Raptors
- a box of Servants of the Abyss, because I wanted some Traitor Guardsmen
- a box of Necromunda Corpsegrinder Cult- because they make great stand-ins for Khorne Berserkers, even with the fitting Nightlord-ly heads.

One has to start somewhere.
And I just got all the miniatures that had caught my eye and that I thought look amazing.
No use buying miniatures which might be good in the game, but one has no motivation painting.
And I just needed to get my creative muscles back into gear!

So I start this thread in the hope it keeps me motivated to see this through.

The last week I spent assembling and priming these guys. 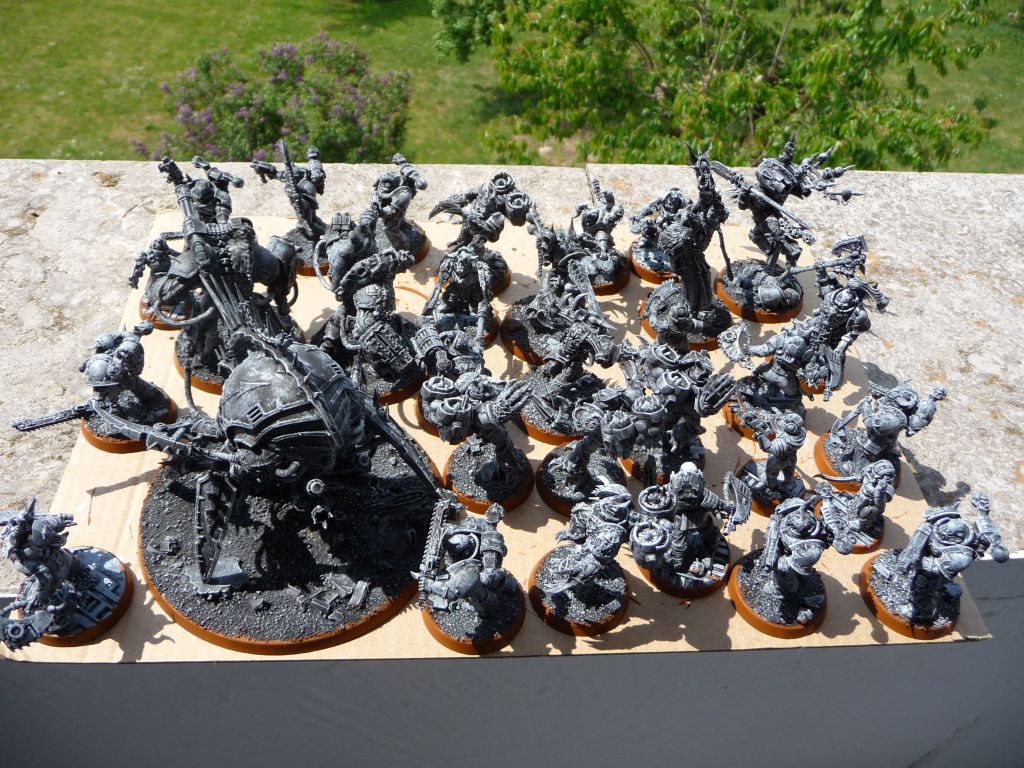 And the Servants of the Abyss- 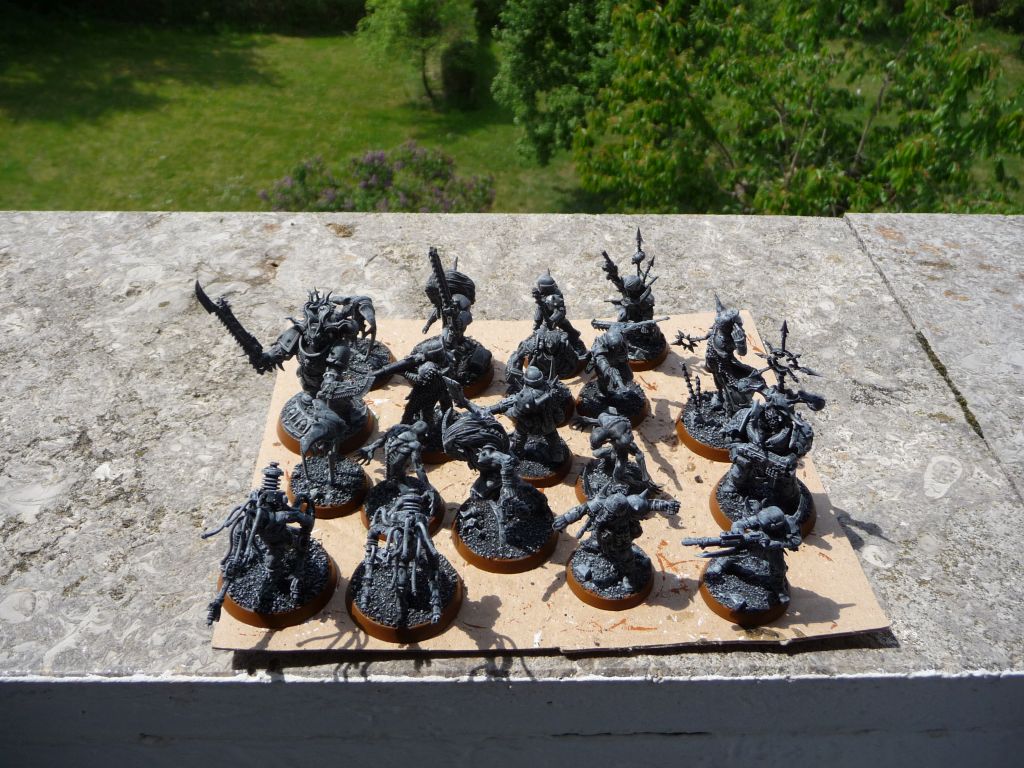 I think the Corpse Grinder Cult make great stand-ins for Khorne Berserkers.
Because, and I am brutally honest now, even back in the day, the old plastic Berserkers were feeling their age.
And these guys come even with nice Nightlord-ish helmets! 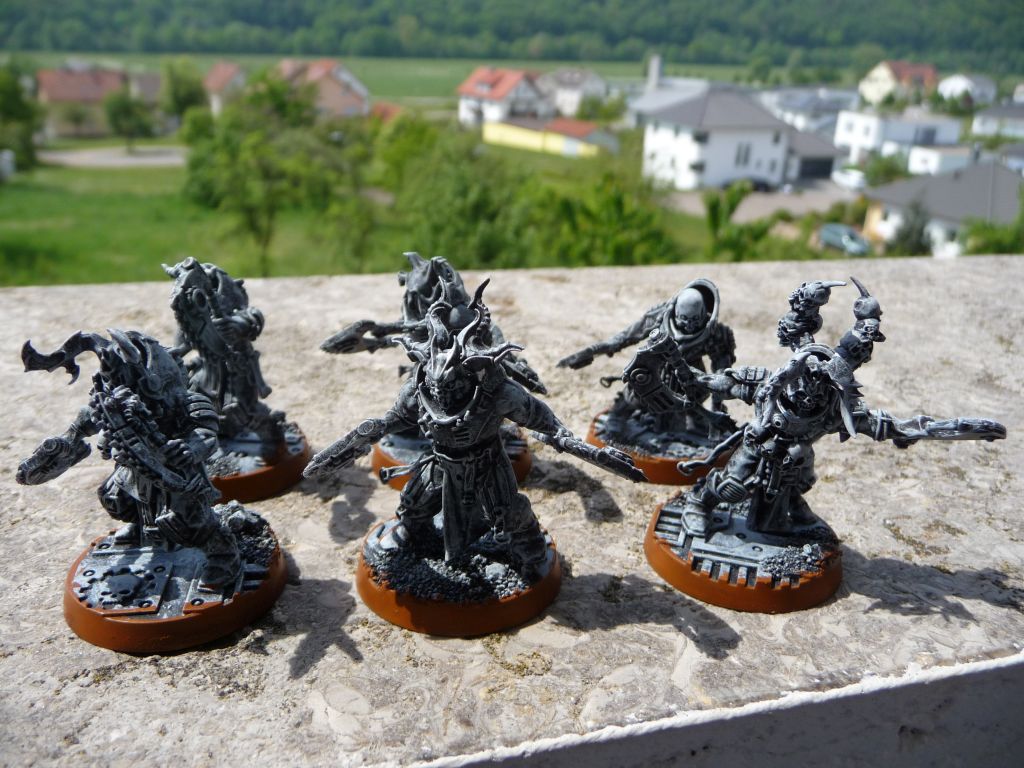 Just look at these awesome helmets!
I could not resist to do a little head swap: 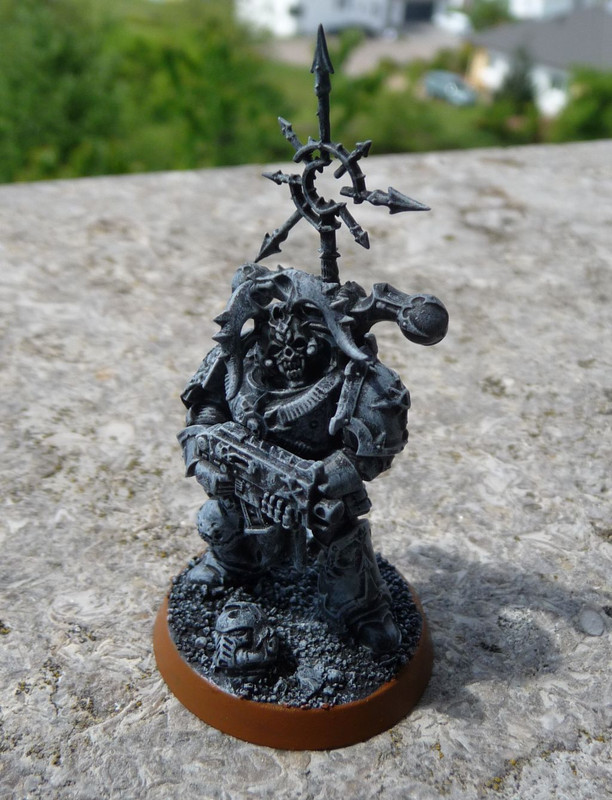 With my last purchase, I also got a free Primaris figure.
Why someone who just bought a bunch of Chaos stuff gets a free LOYALIST Primaris figure, is beyond me, but I will not let this go to waste.

Meet Mephistopheles the Grim, Slayer of the Bloody Peaks, Reaper of the Bone Fields.
He defeated a loyalist weakling in combat and made the new fancy armor his own.
Of course after defacing the Imperial Eagle a bit. 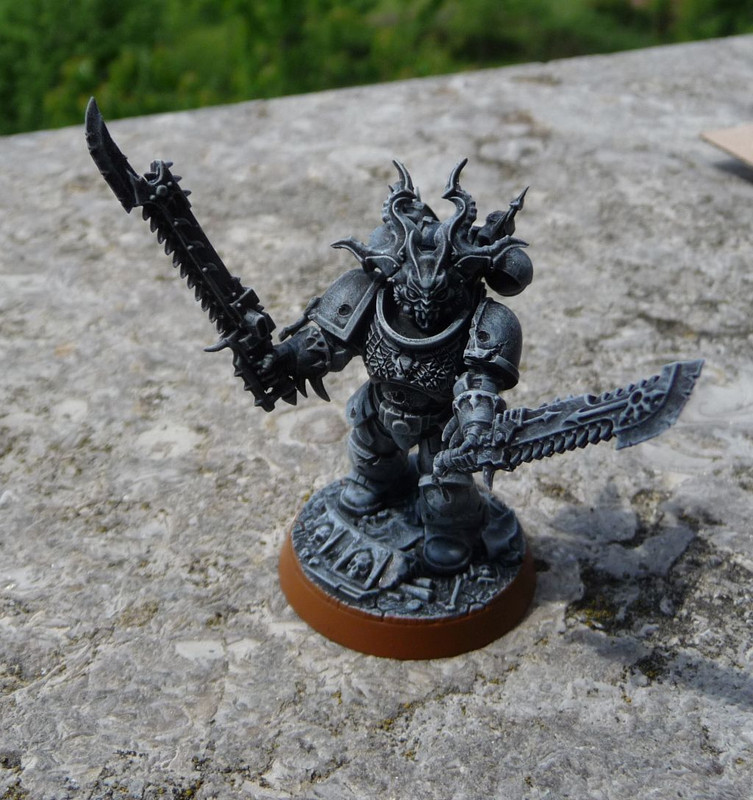 Still, I cannot get over how awesome these new Chaos Marines look.
And how big they are!

Here is a simple size comparison between the new Primaris (converted), the new Chaos Champion, and my very old metal miniature of the towering, mighty Khârn the Betrayer (one of the few survivors of my long sold Chaos army back in the day).

Poor Khârn. No wonder he is so angry. 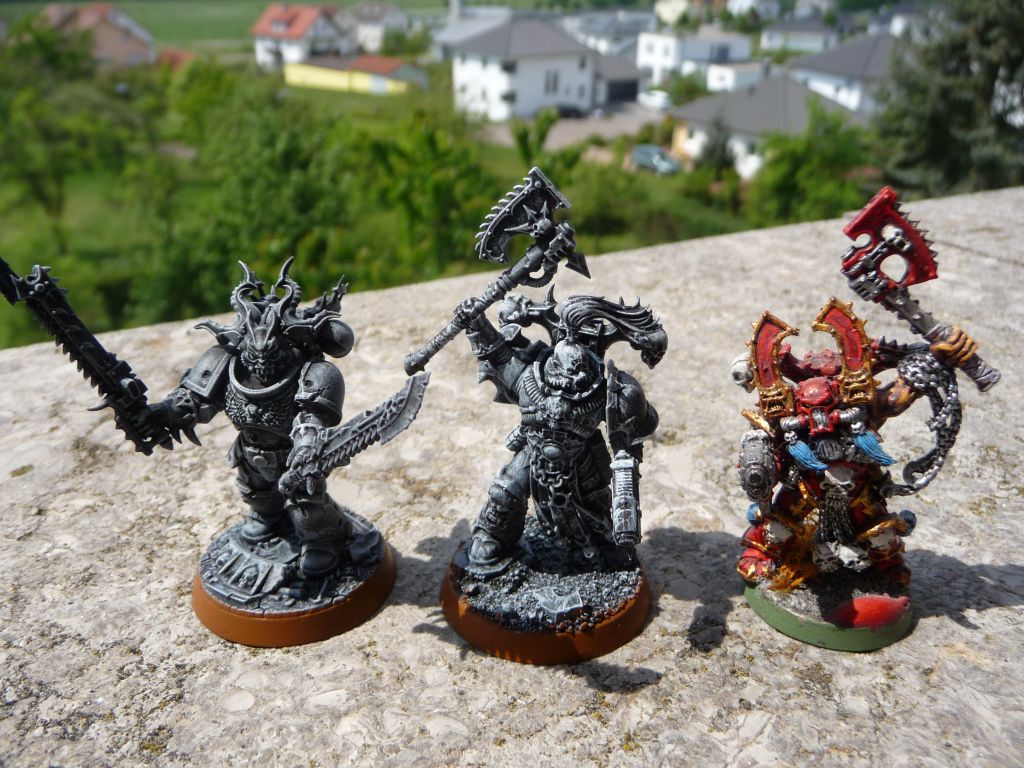 That's a great start. Agree 100% on the Corpse-Grinders; they look good.

Welcome to the Night Lords. They are a fun army with tons of modeling opportunities.

I look forward to following your progress.


Night Lords, "The quick and the dead"

The reasoning and background for the army look promising! Never a bad day to see more Night Lords.

The Corpse Grinder kit bash....awesome, and my Night Lords just got some inspiration to include that, I give you 100% credit, that is amazing looking!

I finally finished up some units.

I am neither the best nor the fastest painter. It took me 5 weeks to finish a squad (flock?) of Warp Talons and a unit of Bloodletters.

Since I am working full time during the week (and sometimes the weekend) time to paint is a precious commodity.

I know I am a bit rusty with my painting, I have not done it on any larger scale for quite some time.

However, I think they came out decent. They are not perfect, but right now I am quite happy with them.

I am going more for Blanchitsu style dirty painting (I grew up with that) than the hyper-reaslistic style favoured now (for which I might also miss the skill and patience I am afraid). Back in the day that was what 40k looked like (at least in my eyes).

Here are the Warp Talons: 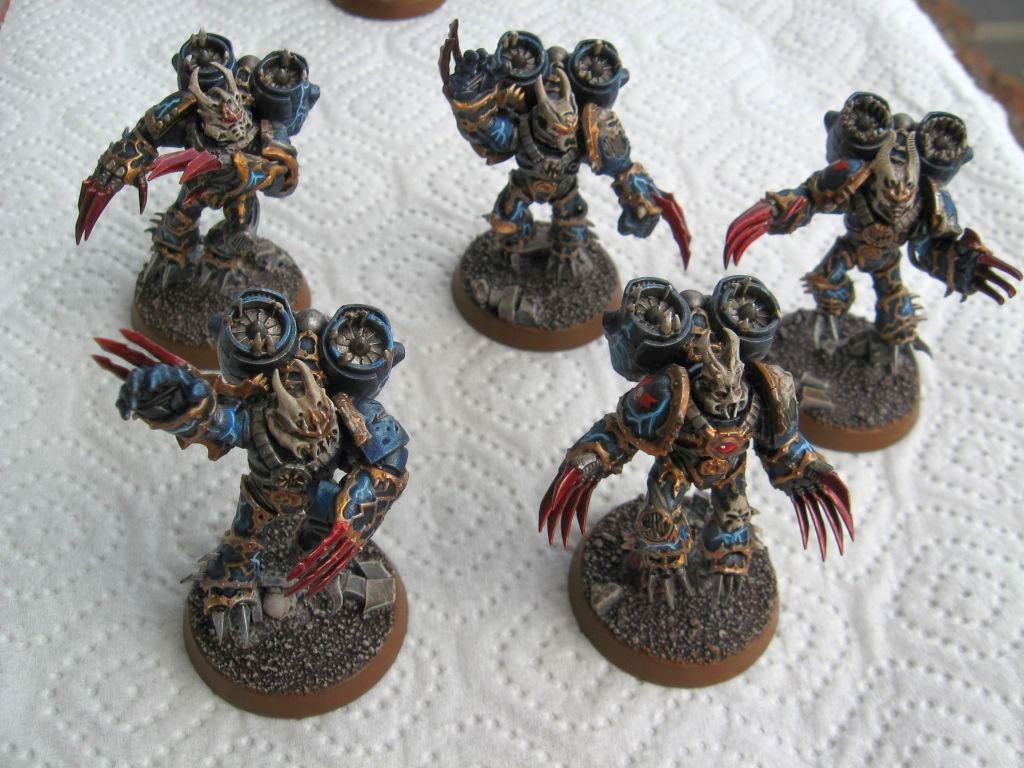 I painted the claws in metal and then glazed over with Blood for the Blood God, to represent weapons so stained in blood they never dry off. 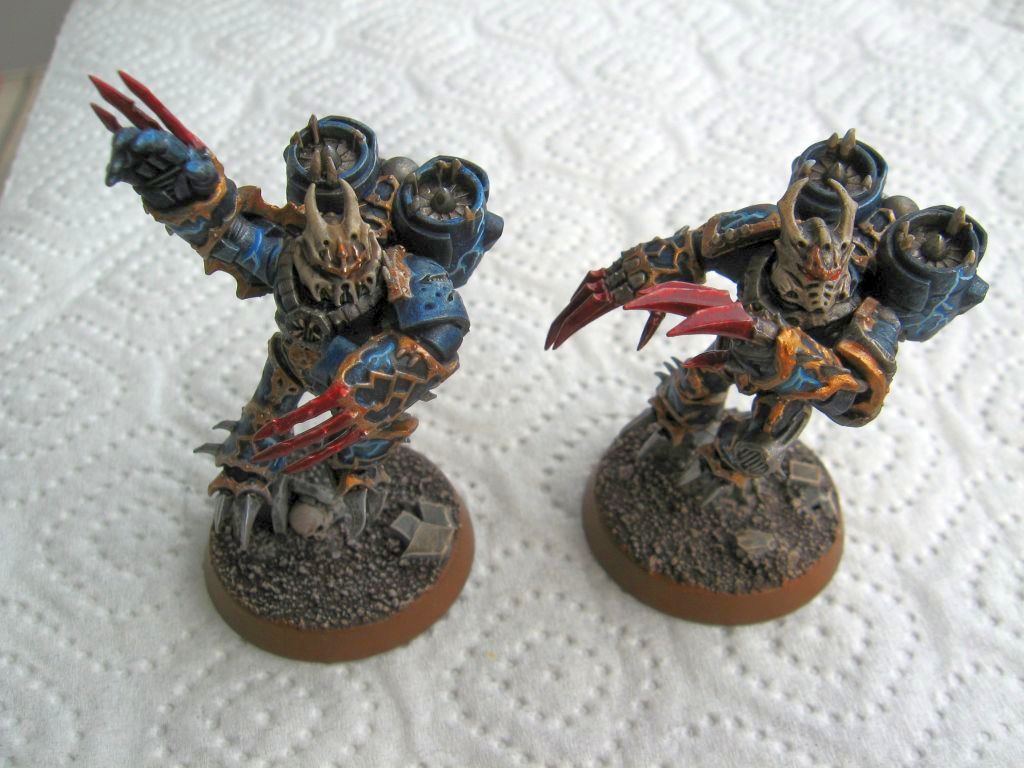 Mephistopheles the Grim- having defeated an Imperial hero and stolen and defaced the Primaris armour: 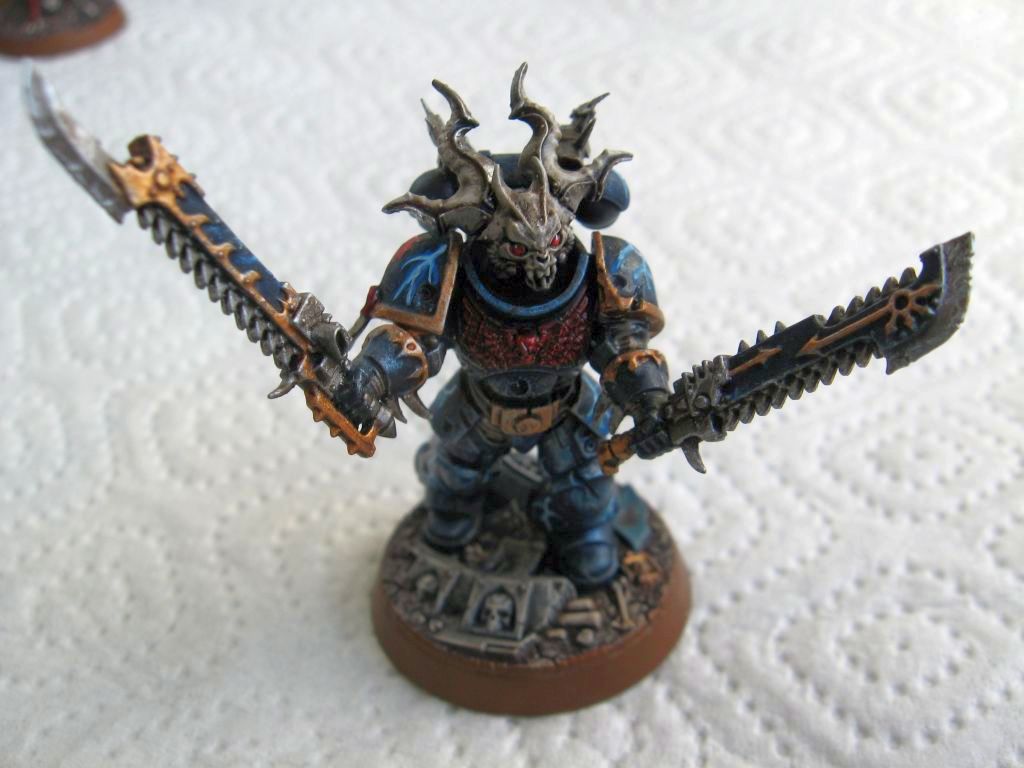 Here I went with the wet blood for skin look.

Plus lightning effects on the swords to tie in with the Night Lords. 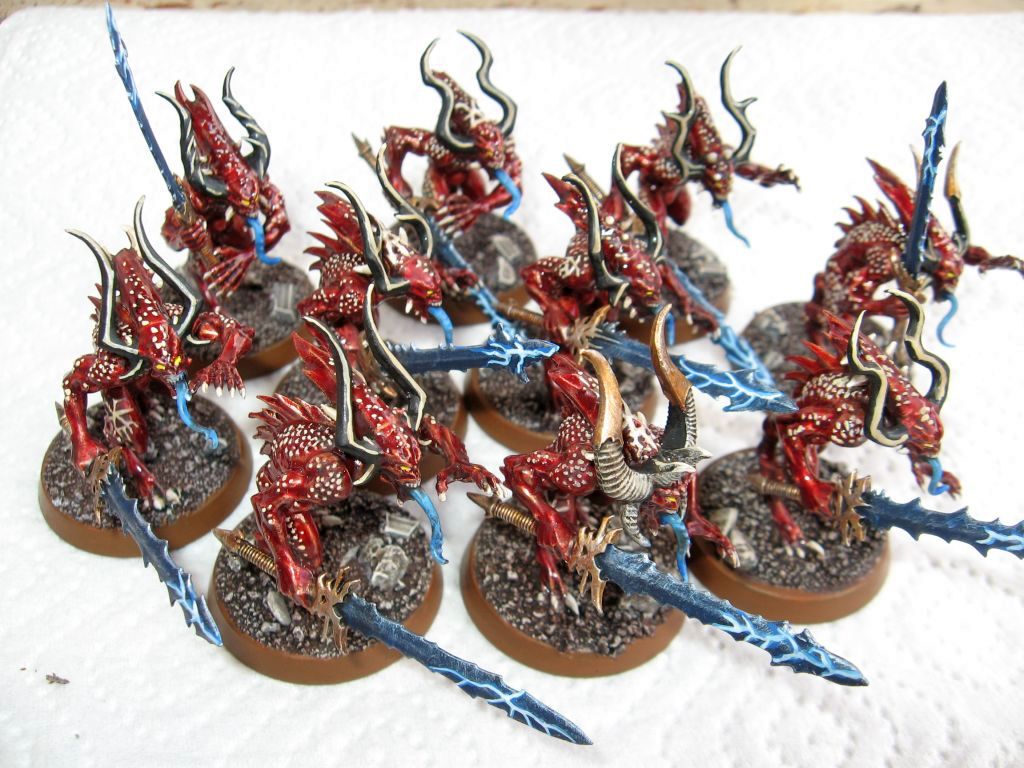 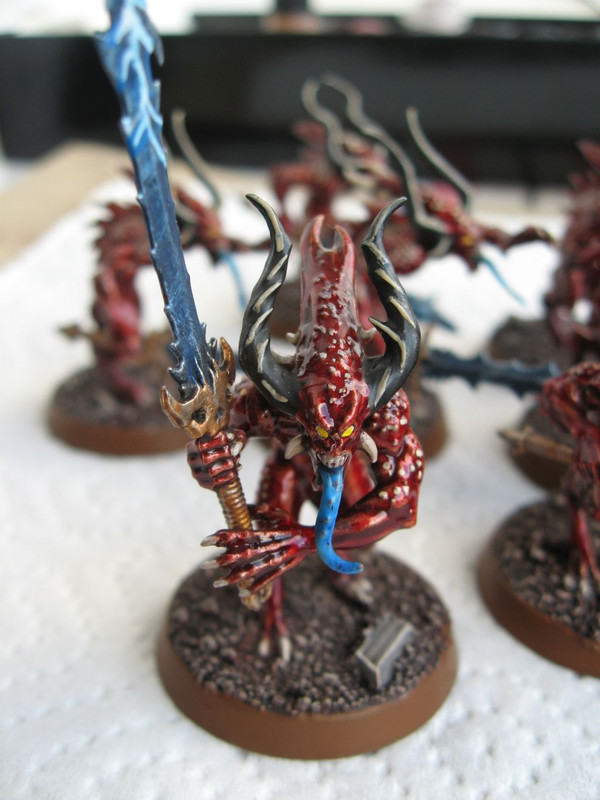 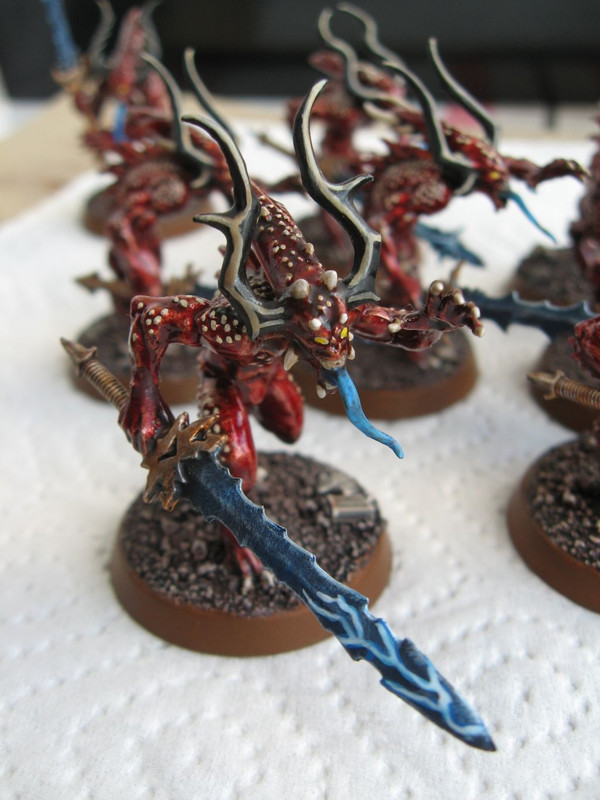 I am not sure about the base yet, would like some snow (to make blood splatter pop) and alien dead bushes. Right now trying out some test models, I will see tomorrow (when dry) if the snow paste pays off or if I will stick to boring old static grass.

I have several different snow pastes/ powder to try out (including the Games Workshop one) but I am not sure yet if any of them are any use.

Anyone here has any good recipes for realistic snow?

This is kind of what I am going for, but will see tomorrow how it dries off: 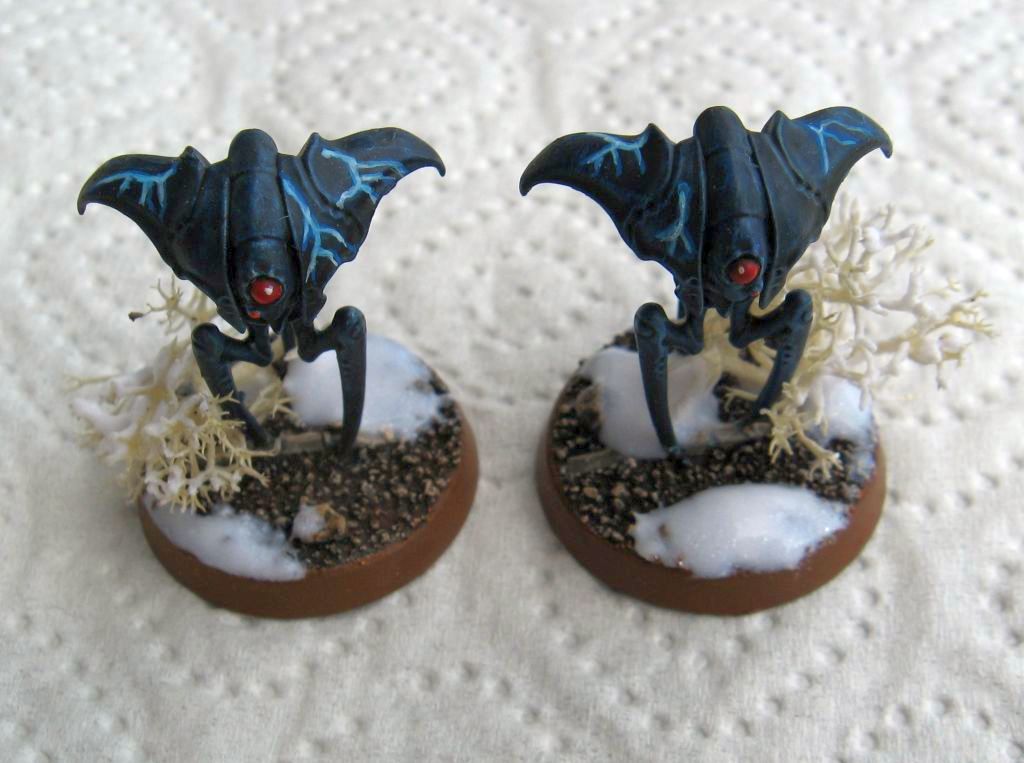 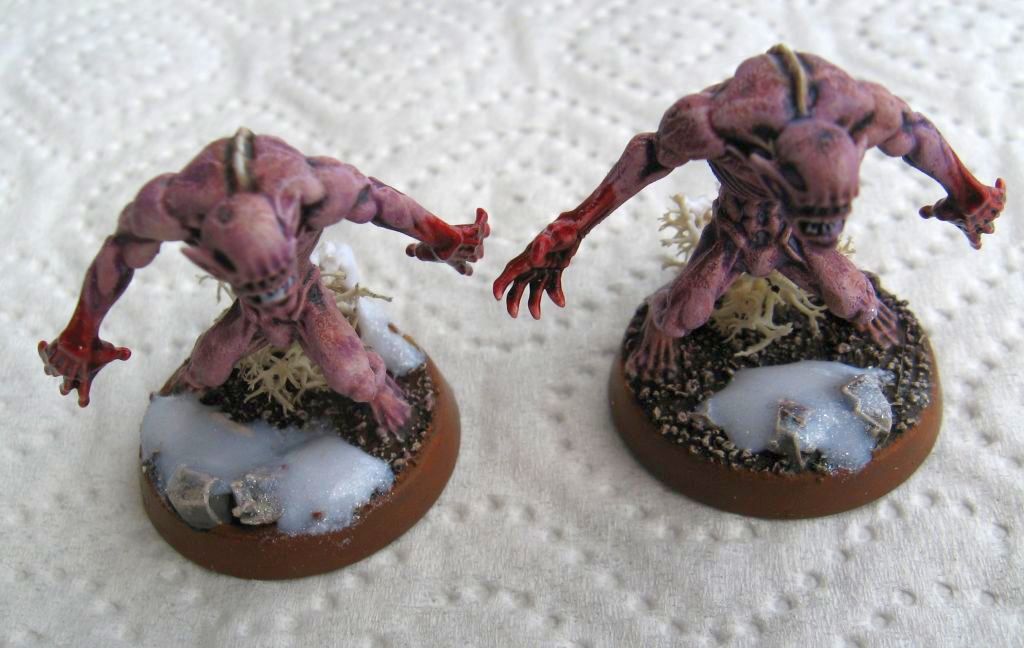 Signed up for the gaming club and beginners 40k campaign for the new edition.

Hopefully, when this COVID-thing is finally over. Surely it cannot take forever?

They want to start with small forces and slowly increase game size with growing army collections.

Might be just the thing to keep me engaged and motivated to keep painting.

Plus- got some heavy reinforcements. 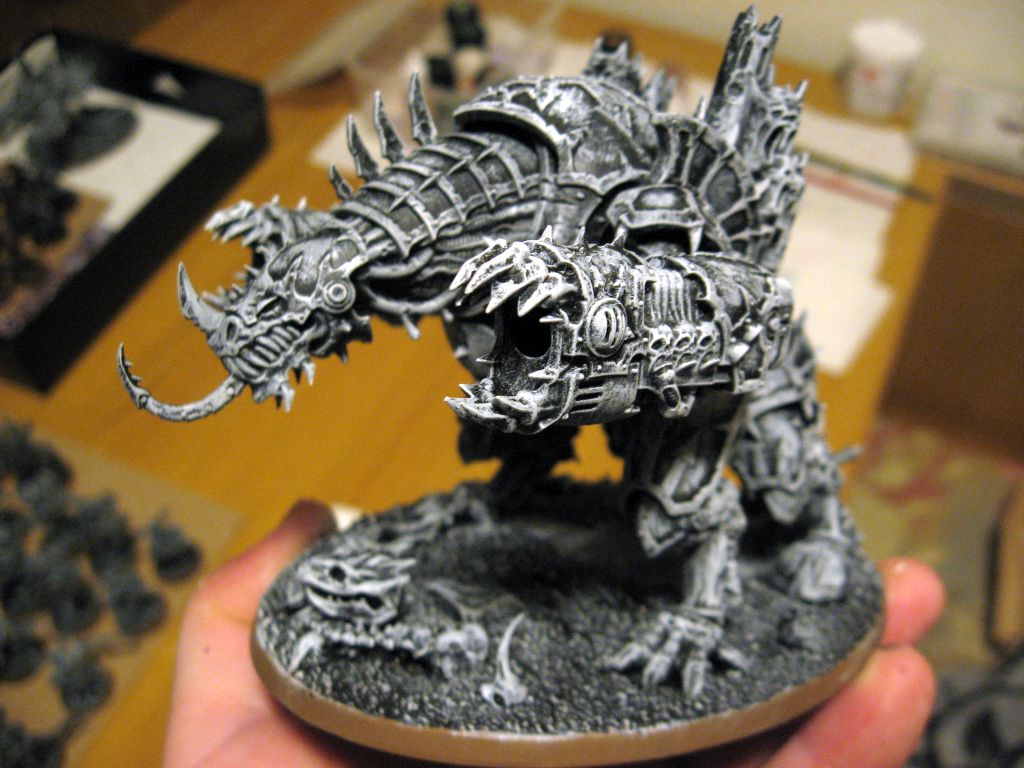 Great stuff. Particularly like the affect on the power claws.

At first I thought you were going to say your free primaris marine was going to have fallen (in with a bad crowd). But no, he's just dead and had his armour stolen. Much better - but not for him.

The Something Something marines WIP thread: http://www.bolterand...ething-marines/

Some random fanfic: Death Guard and some psykic shenanigans: http://www.bolterand...364725-panacea/

Great stuff. Particularly like the affect on the power claws.

At first I thought you were going to say your free primaris marine was going to have fallen (in with a bad crowd). But no, he's just dead and had his armour stolen. Much better - but not for him.

Ah nah, I always find it cheap when the heroes go over to the dark side. Especially when it is such honourless, cowardly, spineless pirates as the Night Lords are.

I cannot really think of any believable way an Imperial hero would be joining up with the Night Lords?

On the other hand, if said hero was confronted with what Night Lords do best (dirty tricks and a devious ambush), now THAT would make for a nice twist.

I take your armour and have your hearts as a nice warm evening snack on the side.

Those corpsegrinder helmets are genius. They look super brutal on CSM, I love it! I also really like how you converted that Primaris model. Usually they tend to stand out a bit amongst a Chaos army, but this guy blends in perfectly with the rest of these merry murderers.

As for snow products, I’ve had very good results with using AK Snow terrain mixed with a bit of their Snow Sprinkles. However I’ve also seen some nice snow bases in my FLGS that were done with GW’s snow texture paste.

Also tagged with one or more of these keywords: Night Lords Legion, Chaos