Unit of the Week: Incubi

Welcome to Drukhari "Unit of the Week" series.

What are you thoughts here folks? How best would you use Incubi?Over to you. 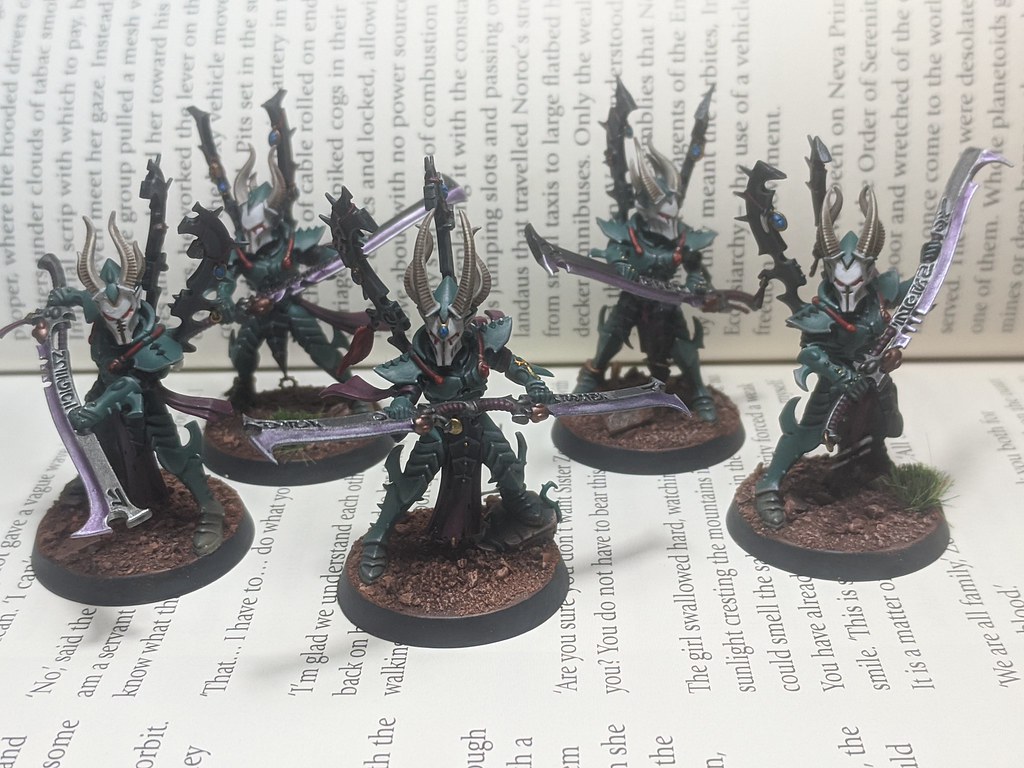 With the fancy new models I'm hoping to get some good info here - I have a box of the previous models also so at some point I will be forming some raiding parties with their services purchased! While they don't benefit from any auras from other DE forces this in some ways makes them easier to use as they can operate more individually (or better yet, with Drazhar for that +1 to wound). A counter attack role seems a good fit in particular.

I think they're fairly straight forward in use, being heavy infantry killers though they will of course chop their way through other infantry. The Lethal Precision rule is potent especially given you can reasonably expect some 6s with the number of attacks a squad can put out but practically speaking this is likely to be more of an anti-vehicle or monster clause as you rack up wounds? Makes multi-wound elite units more viable targets too of course.

Nice for when your opponent might squeak through on a Morale test but the times this will come up must be few and far between? Feels a bit disappointing.

They are heavily armoured for DE with a 3+ save but given they have no guns and no opponent worth his salt will leave them to charge you'll probably want to put them in a Venom (even more than other infantry). I'm not sure if you'd ever want a 10 model unit as this would be a big target and probably overkill, but nothing stopping them hitching a ride in a Raider with another unit, maybe escorting an Archon as is proper?

I love these guys, and might some day get enough of them to build a list around, but that's a long time off.

Campaign wise, their status as mercs is awesome. The Kabals have the role as the primary sponsors of realspace raids, so cults and coven vie for their attention and support; hiring mercs is a way to boost their profile to increase the likelihood that the Kabal will choose them.

Also, they work really well in a Ynari force; because they don't get Obsessions anyway they have nothing to lose by joining Ynari, and there's even a strat that will grant them strength from death, which is more than they get for joining DE detachments. The strat works on up to 3 Incubi units, only cost 1 CP, and its effect last the whole game. It's also a pretty characterful strat- it's called Shrine of the Whispering God, so it just begs for a custom scenery piece, and siad piece could be incorporated into an Urban Conquest Streets of Death campaign, providing access to the strat as a key building strat. Ynari keywords allow them to benefit from other strats and psychic powers, so they have multiple ways to be resurrected and access to invulnerable saves, which makes large units more survivable.

Once I do go down the rabbit hole to build around them, it'll probably be in a Ynari army. Of course, Drazhar can't join Ynari, so they lose his support; this would mean that I'd need at least one of the units in the Ynari force would also have to look good in a DE army so that I could drop them in as back up for Drazhar when I play DE.

The tormentor rule is weak, but it can combo with LD debuff from other sources- still nothing to brag about though.

Time to come back to Incubi with this:

I'm sure that like many I thought that as cool as Incubi are they could do with being a bit better. They're supposed to be elite murderers after all. What does everyone think? I'm presuming they'll keep their rules and such, but I think this will let them do good work.

I will wait for full rules and points to decide.  But, the Demi Klaive still getting +1S and D2 with dual blades is particularly nasty.

Architects of Pain is the big one for me when using Incubi.  On turn 2 they can hit on 2s for 1 CP, and for 2 CPs you can also use Onslaught.

Incubi WS is now 2+, so they'll be Hitting MEQ on 2+, Wounding on 3+, and have the 2D to go with the -3 AP. Those are marine-killing stats right there, with a minimum of 16 attacks for a minimum strength Incubi unit. 4/8 PL is what they are currently, so not really thinking that we'll see a large point increase at all. Definitely a unit that looks to have been buffed quite a bit to bring them in line to what they should have been doing- it will be interesting to see the rest of the Codex, and what the other Kin get...

Impressive damage output. This puts them on-par with Bladeguard Veterans in terms of dishing out the hurt. Granted they are far more fragile but they are cheaper too. If you quickly want to sweep a squad of Marines off an Objective, these boys are for you.

If we can get some extra bang from their rules (and Stratagems) which I'm sure we can expect then I reckon they will earn a good place in lists as a capable assault unit. In particular for a pretty assault based army (or at least closer range) they should be very useful as a means to shove enemies off objectives as noted, or form a mean counter-attack unit.

Maybe there's potential as a core to charges, or acting as a reserve to commit? Being squishy DE are often about localising supremity all the more so for combat, so a small unit that hits very hard would do well here in tipping balances.

Encouraging stuff, especially as Incubi are a classic unit and they have great models so who doesn't want them on the table top? Here's hoping we can see more improvements for DE soon

These changes will make them our premium combat unit, even with other unit changes these guys will be the high qualiy blenders that they should have always been.

With the way that 9th edition works now, almost surgical combat elements in a shooting force or even in a comabt heavy force are really needed to clear objectives, tie up units and force the opponent on the back foot.

As others have pointed out, I do think there will be strategem support for this unit as there is for a lot of units in the new codexes.