The Rise of Acid Reign of House Escher 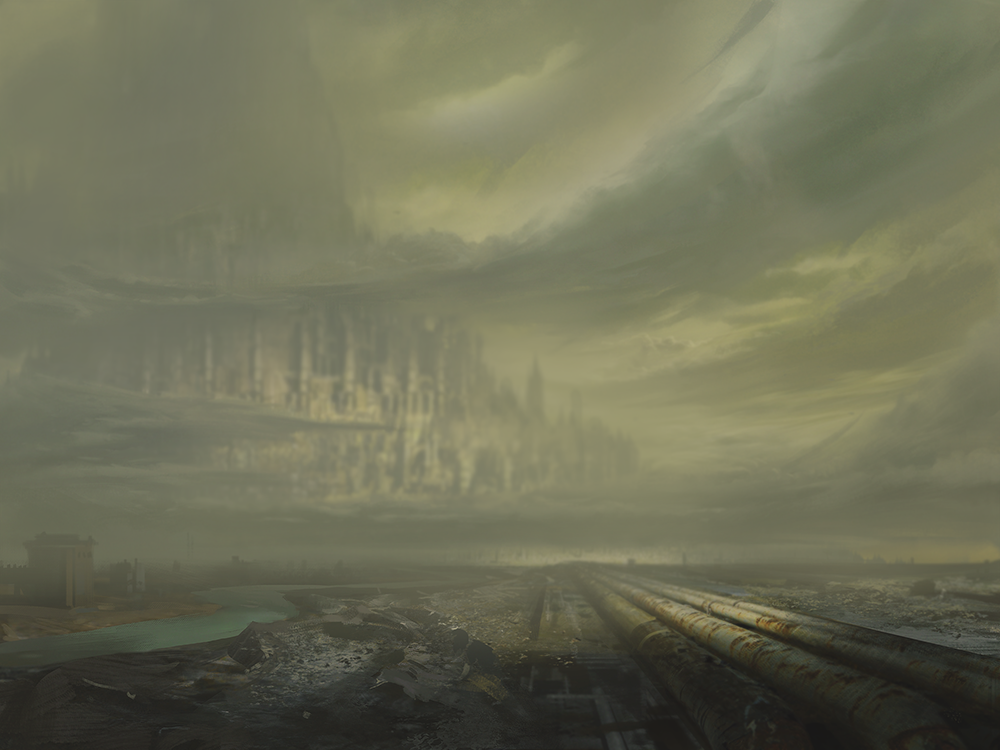 ++My Lord Inquisitor, here’s the summation of the “legendary work” from the Great History of Trazior Underhive series that you requested. Of all the translations I have done for you in my years of service, you have my word that navigating the coarse, convoluted, and ever-changing argot-ridden Necromundan language to bring you this reduction from hundreds of pages of propaganda and mythology building is absolutely the most difficult of my career. I’ll leave the original introduction from the “scribe” that penned this monstrosity as I feel you’ll appreciate it. Like he’s introducing the bloody Lord Macharius himself and not some ganger girl living in a rat-infested hole in the darkness!++

This was given me to know and to record, as I am the Chronicler of Sirna, called Hezyon, servant of the new Queen of Vipers, Miduza. What follows is the second tome of the Great History of Trazior Underhive, wherein the first Viper Queen passes her rule unto her eldest daughter Miduza, first of the Gorgons, and we see the fall of the Sirna Vipers and the rise of Acid Reign. For those wishing to read specifics of the Great War and the rise of Aketna, first Queen of Vipers, that preceded these events, please reference the first tome of this series.

The Gorgons were triplets born from the union of Aketna, leader of the Sirna Vipers of House Escher, and Tyfen, leader of the Coritian Hydras of House Goliath, after a successful collaboration between the two gangs to cripple the Cythan Reavers of House Orlock. Aketna and Tyfen had long since been engaging in a tryst that was a well-known open secret but made an official announcement whilst basking in the glory of their victory. The core territory of the Reavers that was defended by the near-impenetrable fortress of Kezios – named for the Orlock engineer who built it centuries ago – remained untouched, but the exterior collection of their expansive holdings would fall in one of the most brutal gang wars that Hive Trazior had seen in generations. The cost in lives on all three sides of the conflict, as well as mercenaries, bounty hunters, various hangers-on, and innocents, would be staggering.

At one point, the conflict even spilled over into the upper hab zones when a truce initiated by the upper echelons of the Reavers was revealed as an ambush in an attempt to remove the heads of the rival gangs in one surgical strike. It failed miserably; one of the low-level Reavers that was present at the planning of the ambush had been targeted by a spy of Aketna’s and had a bad habit of divulging secrets while raging about his lack of respect in the gang.  The violence that spilled forth from the failed ambush into areas of the hive that rarely saw such blatant displays of gang warfare was enough to draw the attention of Lord Helmawr’s gaze and his ire. Enforcers descended in droves, cutting down anyone with even the slightest hint of involvement in the chaotic fighting with massed boltgun fire.

The following day a provost marshal was dispatched to meet with the leaders of not only the gangs involved, but their direct superiors from the parent houses of Escher, Goliath, and Orlock and force an end to the war. It was made clear in no uncertain terms that the blame for the event and the subsequent disruption to manufactory labor shifts and output quotas fell squarely on the shoulders of the Cythan Reavers. No one outside of House Orlock knows the true amount of the reparations for the damage, but there are whispers that it was so high that the bodies of any of the Reavers directly involved as well as their immediate families were delivered to the Corpse Guild soon after.

Under the terms of the forced truce, the lost Reaver territory and the spoils of war it contained was divided up between the Vipers and Hydras; the two gangs would maintain a stable relationship for over a decade in the wake of this windfall. It was during this time of relative peace that the personalities of the young Gorgons emerged, showing Sithena to be the largest and strongest of the three, prone to sudden outbursts of violence at the slightest provocation. Despite her temper, Sithena was extremely protective of her smaller sisters and routinely took beatings in their stead or dished them out to anyone who disrespected or threatened them.

Ryalee seemed to have a natural gift for navigating the underhive and would routinely disappear into the darkest depths for days at a time, only to return unscathed with news of what she had discovered, and new contacts made. She always seemed to know the shortest route to a destination, a place to lay low in emergencies, or stashes of kit and food when needed. In time, she became known for her vast knowledge of the Trazior underhive; a knowledge that rivaled that of some of the most highly priced dome runners.

Miduza, the smallest and most beautiful of the sisters, with hair the color of shimmering gold, was also possessed of the most cunning intellect of the three and learned readily from her mother the lessons of how to forge the assets of a pretty face and a desirable form into weapons against men. She also learned how to easily persuade her sisters into doing her bidding while making them believe the ideas for her ventures originated from them.

In their formative years, the three young women received the best training and equipment possible while Aketna began to build an urban legend around her triplets as the “Blessed Trinity”, being the miraculous Three Sisters of the Three Sisters Hive when even twins were all but unheard of. In truth, she honestly cared little for her children except for the attention it would bring to her since the wounds she suffered in the gang war had taken their toll on her beauty and fighting ability.  ++Translator’s note: There is some mention here that after the birth of the triplets, Tyfen’s eye drifted to younger, less damaged women than Aketna and also wanted little to do with his daughters. The wording is filled with a number of slang terms I was unable to verify an exact definition of, but the gist is that it paints a very poor image of the giant in the eyes of the Escher gang and Aketna in particular.++

Little did Aketna know what consequences that such attention would bring to her daughters and herself, for in the years that had passed since the gang war, the Scythan Reavers had not sat idly by. A shadowy new leader had been slowly reaching out tendrils to sow discord and doubt within her own gang and that of the Coritian Hydras for a number of years. Reaver spies that had long since been planted in the midst of both gangs, or original members that been turned by greed, weakness, or blackmail, were activated with instructions to quietly start spreading false information about the failing strength of the leadership of both Tyfen and Aketna (something already being whispered about Aketna by her own people), how the mutual friendship and cooperation between the gangs was crumbling (which in truth, it was), and that each gang was weak and ripe for the other to conquer.

In addition, the Reavers had been amassing a stockpile of weapons for both trade and their own use since the close of the gang war. They had steadfastly refused to sell arms to either the Hydras or Vipers for the past fifteen years, but now feigned an economic crisis and agreed to open trade seemingly out of desperation. Fueled by the whispers that were slowly turning the Vipers and Hydras against each other, Aketna and Tyfen both asked for, and offered to pay for, exclusive rights to the best guns and ammunition the Reavers had in the hopes of getting the firepower edge over the other in what was sure to be a new gang war between the long-time friends. The Reavers agreed to exclusivity deals with both gangs, charging exorbitant fees to deplete their coffers and add even more tension between them.

Aketna continued to tout her daughters as the miracle that would see the Vipers through even if she were to fall in the coming gang war (which was all a ploy as she had no intention of getting that close to the fighting), but had lost all of her keen acumen that had served her so well in the first gang war in her desperation to hang on to power. Miduza, on the other hand, was beginning to see too many events coinciding to be mere chance and realized it could only be the Reavers spinning a web to turn the Vipers and Hydras against each other. When she tried to convince her mother to go to Tyfen and speak to him personally about this being a play for revenge by the Reavers, Aketna struck her across the face and reminded her daughter that she had no real power or say in how the gang was run and she and her sisters were merely pawns for her to use as she saw fit.

Miduza left, angry, but was unsurprised by her mother’s rash and illogical actions. Unknown to her or Aketna, one of the Eschers that the Reavers had turned to their side overheard this conversation as well as Miduza telling her sisters that they would go to Tyfen themselves and talk to him in an attempt to end this war before it started. This information was relayed to the Reavers moments later by the spy and set in motion a chain of events that would shape the fate of all three gangs.

Not quite done, but I'm posting this up now because I had a bit of a scare with MS Word last night when I thought I had lost the entire thing because I was getting errors when trying to open the document about it not uploading to the cloud properly or some such nonsense when I didn't even know that sort of backup was happening.

This rules on a lot of levels, but I really love the framing device best of all.

I'm not even normally into Necromunda particularly, but this is really gripping stuff.

Definitely looking forward to reading more about the rise of the Acid Reign!

Nitpickery: To maintain the feel of a formal Inquisitorial report you might want to eliminate the contractions.

Also tagged with one or more of these keywords: Necromunda, Escher, Goliaths, Orlock