40 replies to this topic

I don't do signatures, sorry.

Getting close. Just finished up all the basing. All I really have left are some of the weapons. I practiced painting the weapons on the Plasmancer and Thralls and I am satisfied with the results. Now I just need to do the weapons on the Overlord, Skorpekh Destroyers, and Skorpekh Lord and then do the final seal coat.

Did the final matte coat on the rest of my Indomitus crons today. Pics should be up tomorrow.

Pictures! Step by Step when I get a chance. 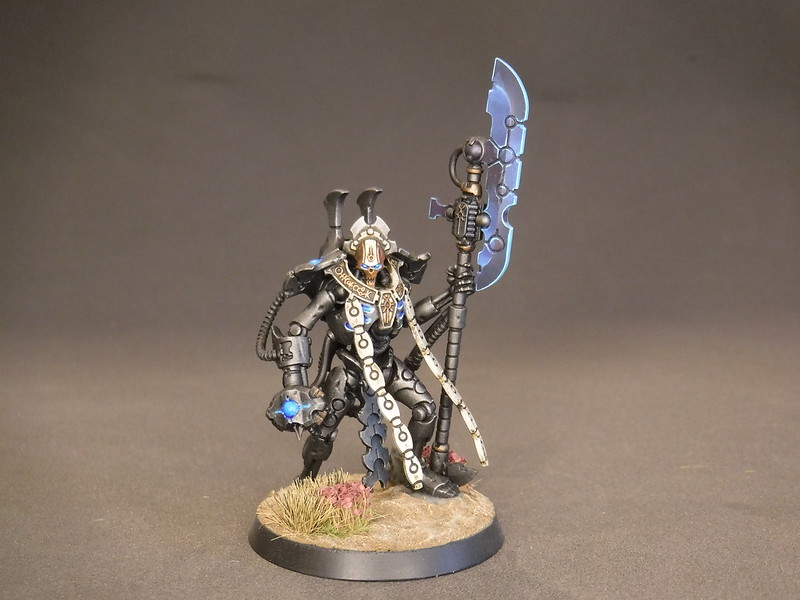 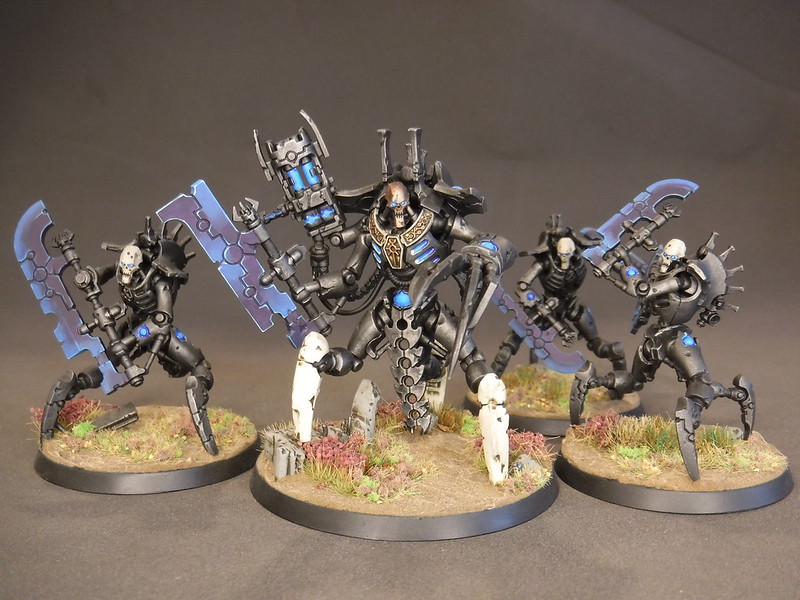 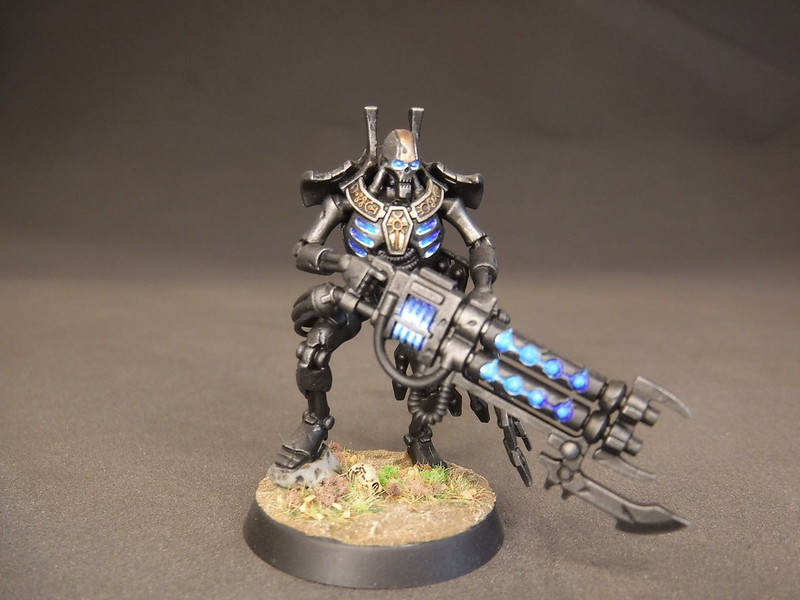 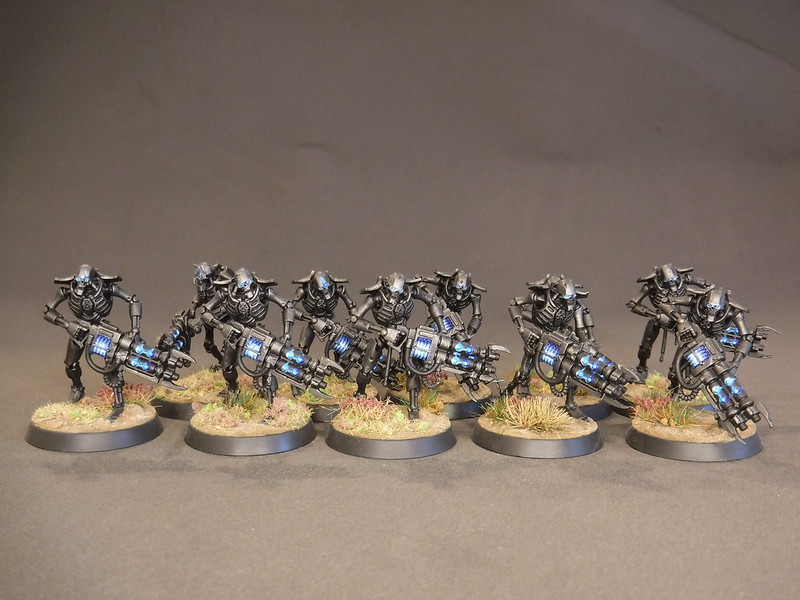 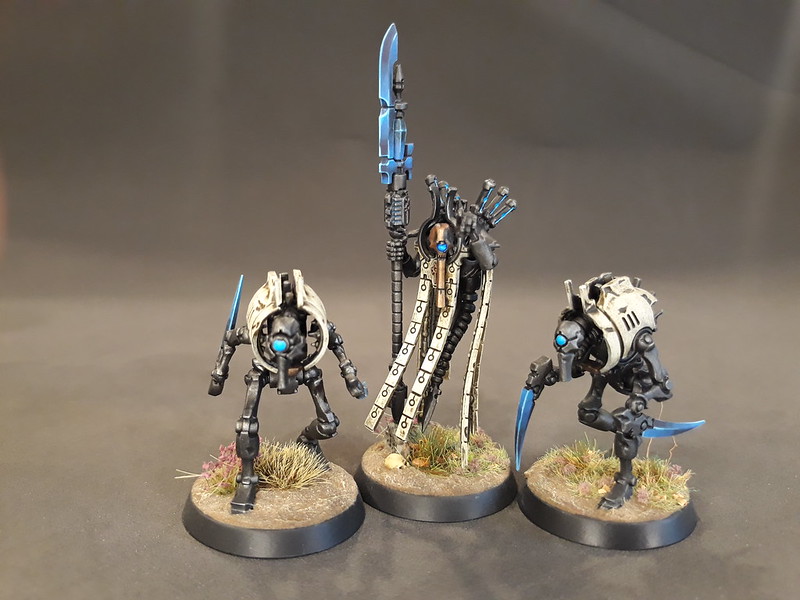 Sorry about the quality of this one. I forgot about mr long legs and did a quick phone picture. I didnt feel like putting my real camera back on the tripod. 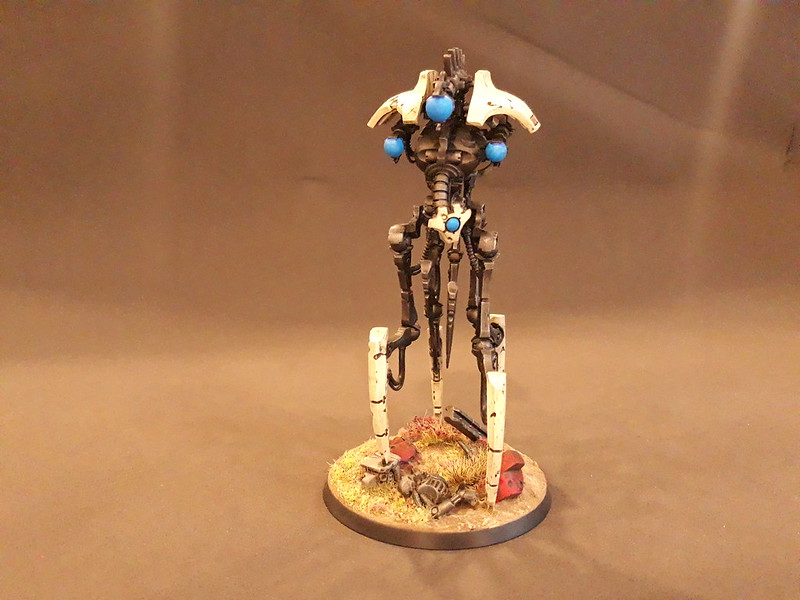 All right here is my recipie. 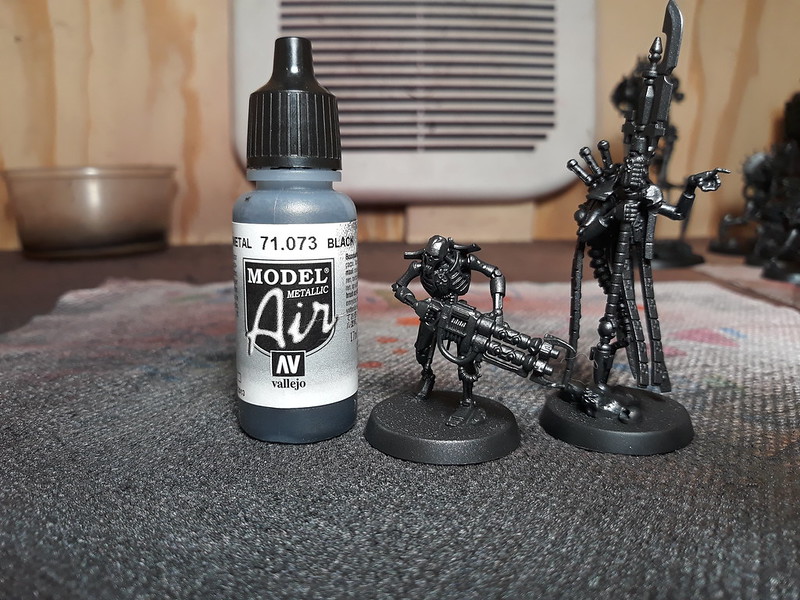 Airbrush Vallejo Model Air Aged White on whatever you want off white. 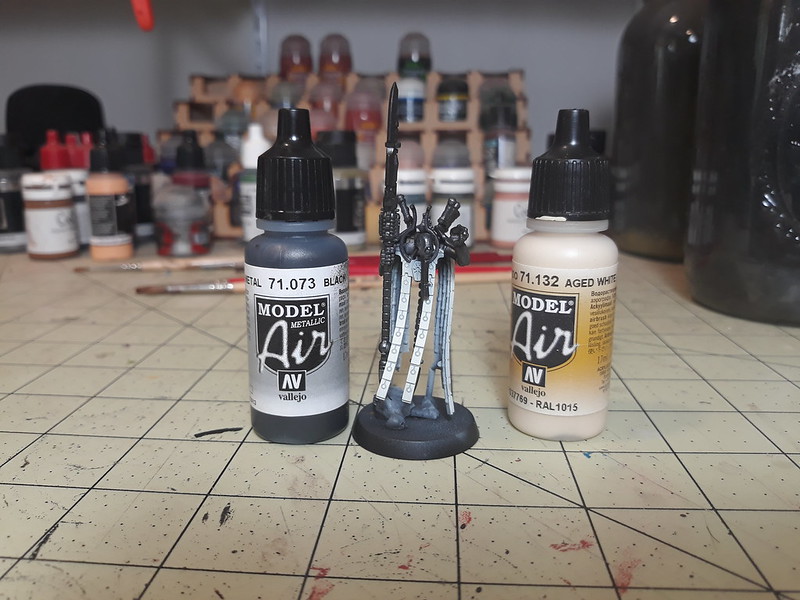 Block in details and clean up the Aged white overspray. I got ahead of myself here and painted his weapon blade too but that really waits until the very end. 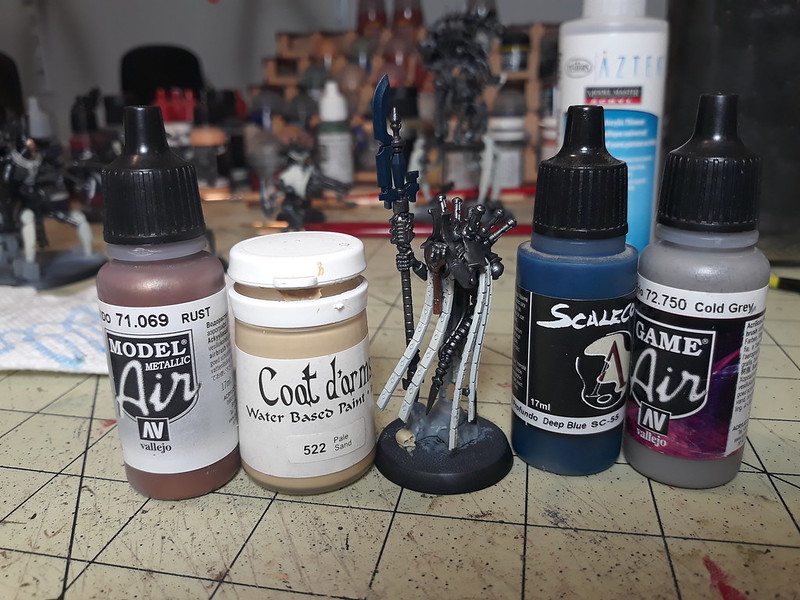 Gloss varnish, I use Vallejo Gloss via airbrush. 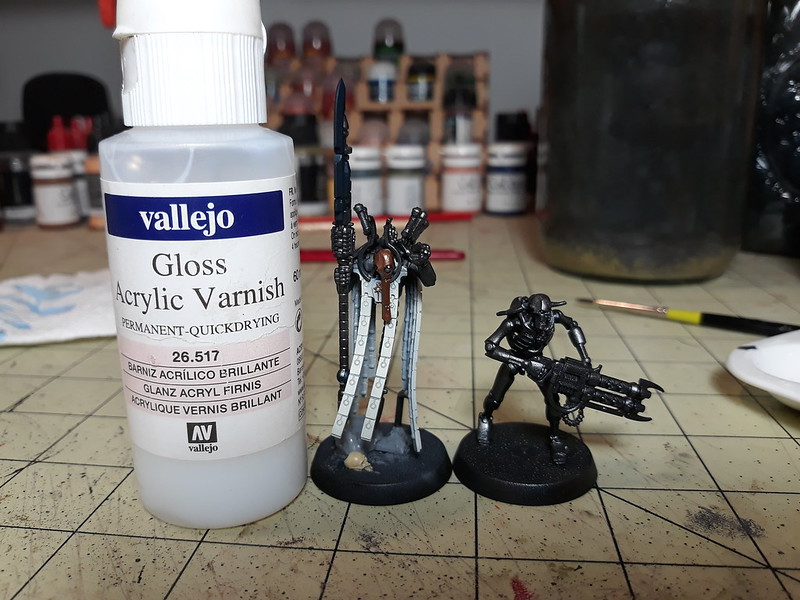 Out comes the enamles. I wash the Aged White, skulls on the bases and any stone work with a Dark Brown enamel wash from AK Interactive (not pictured). After that dries I wipe the wash off with cotton swabs. I then enamel wash all of the metals with Mig Black (pictured). Wait for it to dry and then wipe off the excess with cotton swabs as desired. Picture is before I wiped the excess off. Its super black! 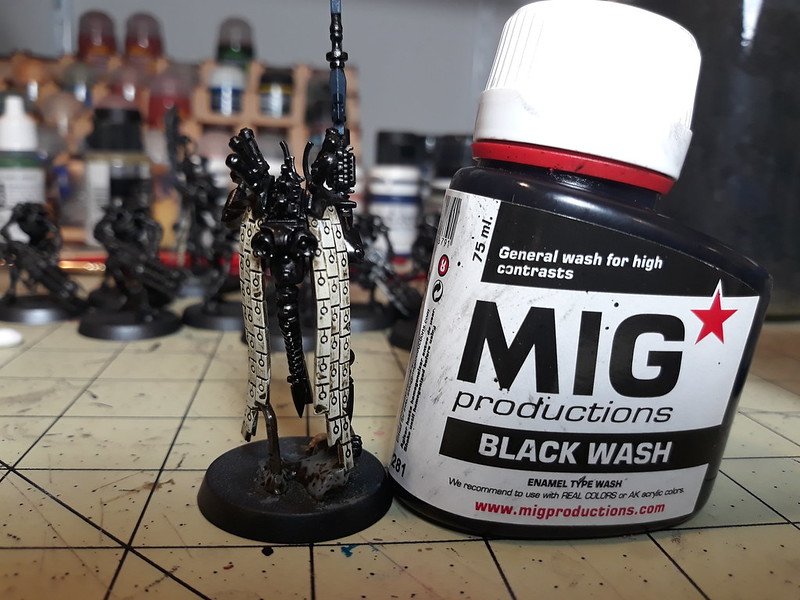 Once the enamel is wiped off I let it dry overnight. Then I dry brush all of the metal with Vallejo Model Air Silver. I hit the brass a little with it too just to give the edges so pop. 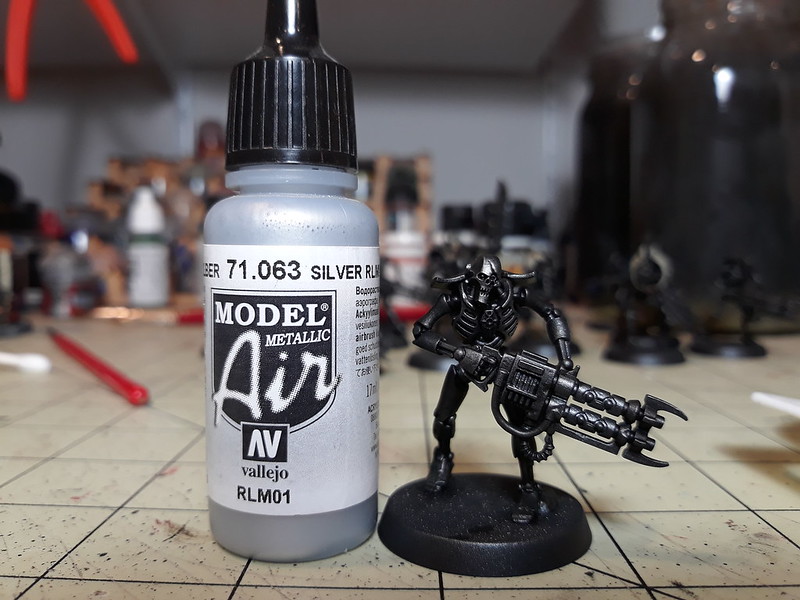 Now its detail time. I use Golden High Flow Titanium White plus Liquitex Flow Aid to flow the white into any recesses, aka the eyes and gun channels. This takes several thin coats to get good coverage. I use the white straight, with a bit of thinner to taste, to paint any orbs or large eyes that I want to glow, again several thin coats are needed to get a solid white. I used the bone to pick out the skull. I guess I just felt like taking a picture of the silver again just for fun, ignore it because it was just used for the dry brush step. 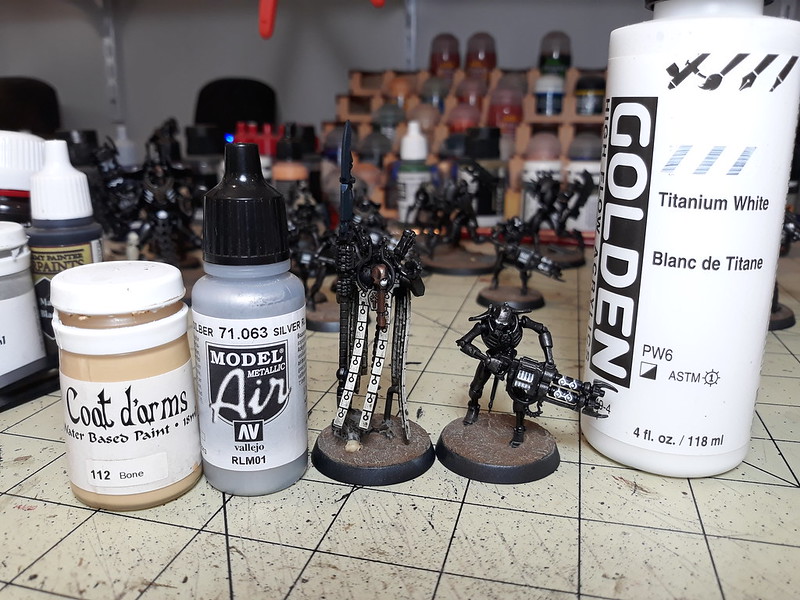 Now for the blue glow! I use Golden High Flow Florescent Blue plus the flow aid to flow the blue into the recessed areas that were painted white. I used the blue as is to paint any orbs or large eyes or power cores (see the big destroyer lords gun for example). Again many thin coats are needed for smooth coverage. Then I pin washed the recesses with Minitaire Ghost Tint Blue. I also use the Ghost Tint to dim the last couple recessed spots on the weapons to give the idea that the power is pulsing from the weapon power core. Then I use the white to pick out the very end of the weapon rod and the center of the weapon power core and a little touch in the eyes. I do a similar procedure for the ribs of the characters. White, Blue, Ghost Tint one side, touch of white on the other to give the idea that the power is burning from the center.

If you want a  step by step video check out Kris Belleau's YouTube video on how to paint the Royal Warden. 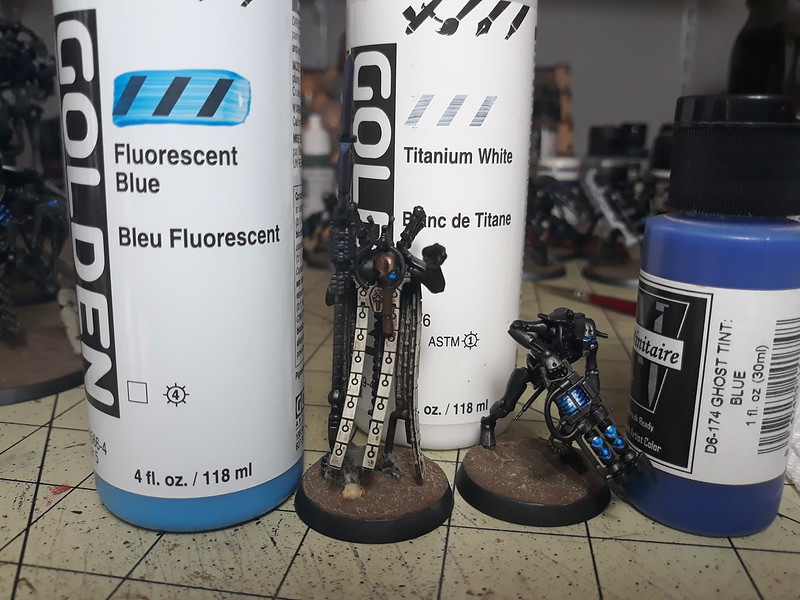 Then touch up the rod with black. The idea here is that the weapon rods are Black Stone and the power surges through the core of the rod. 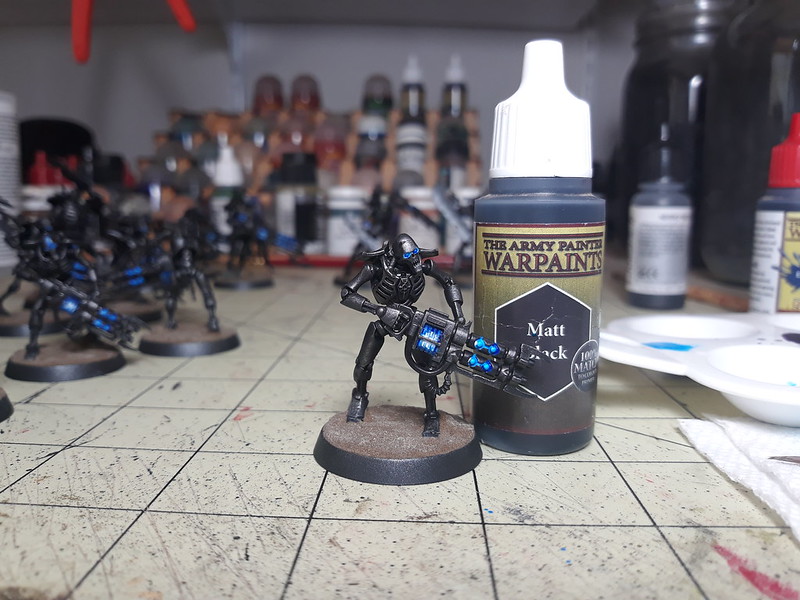 Now the fun bit. The weapon blades! This was my first try at doing these types of blades so it was quite entertaining to mess around with.

I used 3 blues plus a wet pallet to slowly glaze the weapon glow into existence. Vallejo Model Air Ultramarine, Scale Color Sky Blue and Scale Color Fantasy & Games Eldandil Violet. There are lots of good YouTube videos out there if you are looking for a step by step on how the paint the blades. In short its lots of super thin glazes and I mix in ever increasing amounts of the lighter blues as I go. Then edge highlight with the lightest blue plus a little dab of pure white here and there. 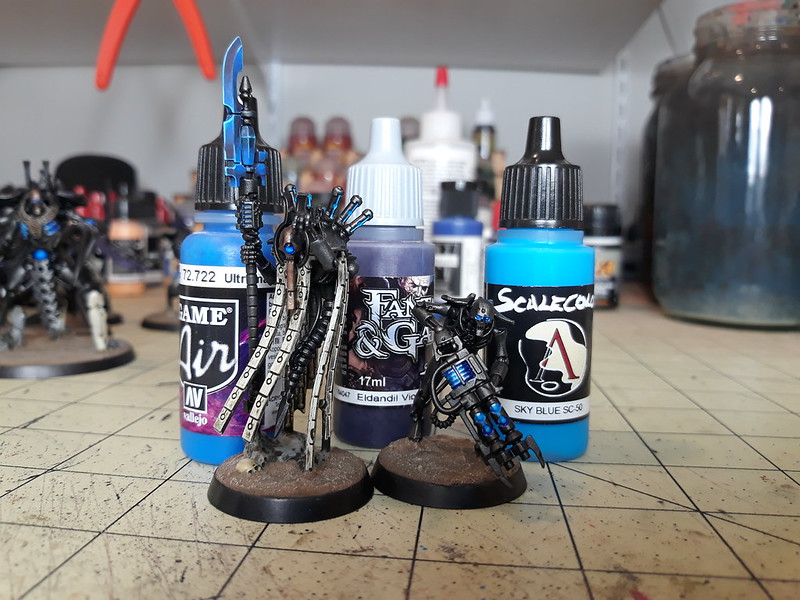 Then do the base however you want and do a final matte coat (I use Vallejo Matte via airbrush) and they are all done! For basing I used Huge Miniatures supplies. 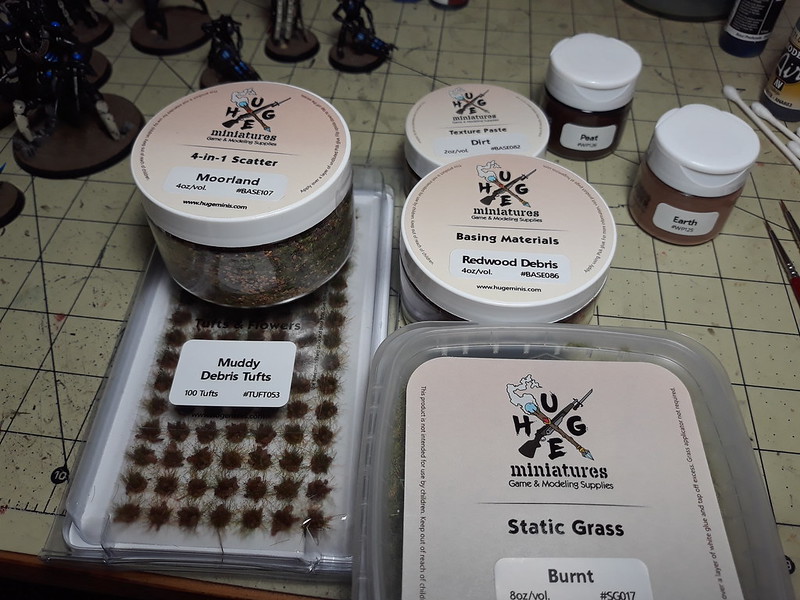 Thats it. Have fun painting the sweet new crons! 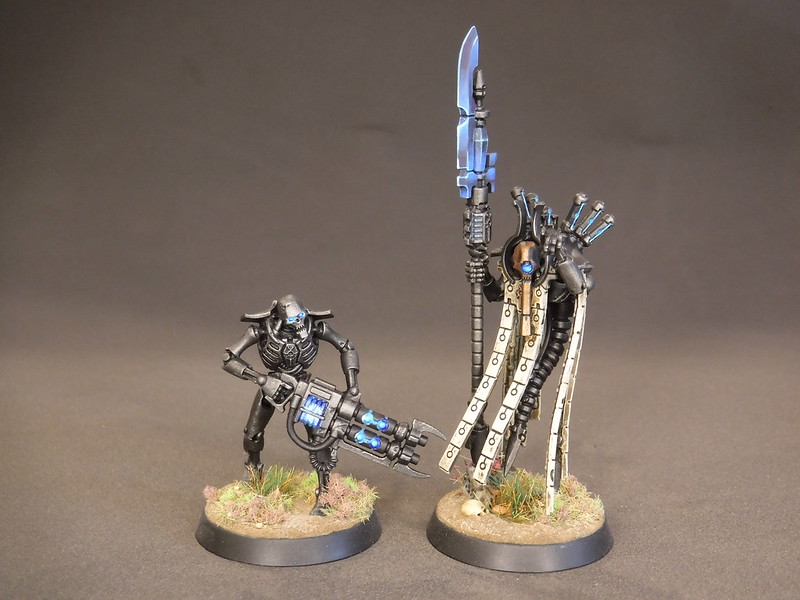 Great color choice, I especially like the purple in your blades and energy gradients. Thanks for sharing the steps!

"Whatever the Blood Angels' flaws, nowhere in the Imperium can truer servants of the Emperor be found." , Blood Angels Codex 5th ed.
"Although feared and mistrusted by those they protect, the Blood Angels continue to smash the Imperium's foes, compiling a battle history second to none.", Dark Millenium 7th ed.

"You underestimate our cousins, skald. Their gold and jewels mask a killer’s soul, and we would do well to remember that.", Helik Redknife, VI Legion ‘Vlka Fenryka’ Captain

Great work really like it, I'm planning on dark necrons for my indomitus halves, I was thinking of using bascilicanum grey contrast over a S75 dark metal and then building mine up similar to you but i'm planning orange - looking to see your future progress!

So, I got $100 USD worth of gift cards to my FLGS for my BDay. So I was thinking of getting some more crons. But what?

-An Elite Edition starter for another set of Skorpekh Destroyers and some more warriors/scarabs plus some extras for my Blood Angels? I already have 20 of each warrior weapon though.

-Pull a little cash out of pocket and get The Silent King?

-Maybe hold off and see what our start collecting replacement is?

I want a nightbringer but the current model is meh so I kind of want to hold off on getting one.

I would probably go for the ophydian because of how good they look.

I would probably go for the ophydian because of how good they look.


They were my first thought just because they are cool looking. And well, at least for me, that’s 90% of the decision.😃

I don’t know how often you play but I’d try to get something you find playable and a fun hobby project. I think the void dragon would fit the bill and would be a heck of a fun painting project.

the question is do you want such a large piece to work on as you are trying to close in on getting a finished look to the army?

I love your necrons.

Question about glazing: my glazes always are so runny or watery do you just use water or something else to thin them?

I love your necrons.

Question about glazing: my glazes always are so runny or watery do you just use water or something else to thin them?

I use Testors Universal Acrylic Thinner (ie a generic thin medium) to thin the paint for glazing. Yes, its very thinned out. When I glaze I keep the brush damp not loaded with paint like I would otherwise. Sometimes it doesnt even look like you put any color down and it just looks like you made the surface wet but just be patient. Let that layer dry and keep applying over and over.

I don’t know how often you play but I’d try to get something you find playable and a fun hobby project. I think the void dragon would fit the bill and would be a heck of a fun painting project.

the question is do you want such a large piece to work on as you are trying to close in on getting a finished look to the army?

I currently have a Chaos Knight in the airbrush booth.

The void dragon is really nice and I have ideas for it floating around in my head.

I ended up grabbing 2 boxes of Ophydian Destroyers. I have one box assembled but I have been busy moving my hobby stuff to a new part of the house. . . it has been a huge undertaking. I am pretty much done getting everything set back up so I can start actual hobby stuff up again soon.