I'm new(ish) here. I've read plenty for a while, but only recently sorted out an account on The Bolter & Chainsword.

I came back to 40k a couple of years ago, after a break of 15 or so years. I fell into DA accidentally, I had bought the smallest starter, then a couple of bits off eBay, one of which happened to be a Ravenwing Bike. But after doing a bit of reading (a lot has happened since 2003!), I really liked the background, seems much more interesting than most other chapters. So I bought some more kits.

Things snowballed... I now have c7k points of Unforgiven, it has mostly been built and primed, but only about 3k of it painted so far. I don't get anywhere near the painting time I'd like - maybe a couple of hours a week. So it's been slow going.

I've been wanting to do a hobby thread for a while, I'll add picture of some of the bits I've already completed - going back to close where I re-entered the hobby. Hopefully it'll show some of the progress I've made with painting (and photography) over the last 2 years.

I was sure I had more photos, but I seem to have deleted them, or put them somewhere a bit too safe!

My first painted unit was actually a Tactical Squad (what else!), but that is one of the missing photos.

I soon bought the DA Lieutenant though, and I remember being so pleased with the outcome. I look at it now though, and wonder whether I should strip it and start again...(basing was added later).

Next up, and around the time Kill Team was released, I decided my roster would be a bit different, and so I went for just Scouts. The sniper squad was actually the first unit I fully completed with basing - and they were my first attempt at camo. I have a lot of fun playing KT with these guys.

Scout Squads
A bit of a jump in time to the middle of last year, I spent a lot of time building rather than painting  - and I'm missing some photos of what I painted in that time too. I really liked the Phobos Librarian, so he was on the shopping list.

Phobos Librarian
I also picked up the limited edition Primaris Master. Swapped in a few bits from the DA upgrade sprues, and here we have my warmaster. He single-handedly (specifically his left hand) won me my last game pre-lockdown, holding off a swarm of plague marines and poxbearers on a bridge for several turns. Killing everything he fought. He's probably one of my favourite models.

That'll do for now, I'll add some more photos in later!

Welcome to the Rock! Really like the master and camo patterns you got going.

I quite like the models. Very nice scheme, and as Galloway said, the camo looks awesome.

Welcome to the Rock Brother, continue your labours with the tenacity of the Lion and the fruits of victory will be yours.

Welcome to the Rock!

Your painting efforts, were certainly better than mine when I started! Keep it up, for the Lion!

Thanks very much for the welcoming words.

A few more to add:

The first vehicle I fully painted was a Redemptor Dreadnought, the easy build version that came in Conquest. This was the first time I'd really tried to do some edge highlighting.

Redemptor Dreadnought
Next up I painted up the Shadowspear eliminators. Again using the same camo style. I really was really pleased with weathering I achieved on the cloaks.

Eliminators
It was about this point I joined a slow grow league at my LFS. I was in desperate need for some troop options other than my Scouts. And I had managed to grab the Saregeant Jovan model, so the next unit painted was the first half of Squad Jovael. I kept the sergeant on a 32mm base, I didn't want him to be on a different base than his squad.

Intercessor Squad Jovael
Next up I wanted a break from painting green! I had always intended to paint my Agressors in Deathwing colours, but just prior to me finishing these guys the White Dwarf had come out, and there was a bit more fluff about Primaris joining the Deathwing. I know there's been nothing official about Agressors, but it just seemed appropriate.

I can already hear Stobz screaming in those distance about the Deathwing Aggressors...

They look good though!

I can already hear Stobz screaming in those distance about the Deathwing Aggressors...

They look good though!

Haha - to add insult to injury, I added some Crux Terminatus to their shoulder pads after these photos were taken!

Right, to bring my army right up to date, by this point we are into the models painted during lockdown:
I wanted a Grenade Launcher in my Intercessor squad, so I painted up another 5 to go with Jovael and his squad.

My first experience of GW flight stands. Oh dear. One of these has already broken off just in storage...

When I started up my Dark Angels army, I read quite a bit of the background fluff. My favourite character was Veteran Sargeant Namaan, a bad ass character who (spoiler!) dies a heroic death at the hands of an Ork Dreadnought. I had been keeping an eye out on ebay for this model, but they were going for silly money. They seemed to drop when it went MTO, so I grabbed one off eBay then.

I think I got a pretty good cast. I actually loved painting this model. As many of my recent painted models where, it was my entry for the monthly painting competition at my flgs. I'm unlikely to ever win, but it gives me something to focus on.

The Primaris Chaplain is such an awesome model. But I've never been happy with this paint job. I don't really know why.

My Deathwing grows with the addition of a Venerable Dreadnought. I painted up all the ranged weapon options, so I'm not restricted to a Plasma Cannon.

What a great model this is. Yes, it's impractical, but I love the old school style. This is the Warhammer World exclusive version. I really want to get the other two that come with weapon options. I magnetised the MM and sensor in case I ever do (or if I get round to kitbashing the weapon options).

I went through my models, and realised I had a load of Intercessors primed but not painted, so these were up next. I still have 5 to paint, but somehow 4 of them are sargeants...

2nd Intercessor Squad
And now we are up to date with the last model I have finished. Really enjoyed painting the banner, need to do a old marine one next, and a Deathwing one.

Right as we're up to date I'll stop spamming photos. It's quite cool to see it all in one place - hopefully there is some improvementand progression in teh painting since the first photos!

Hopefully I can keep this thread up to date as I paint up more of my backlog. Currently on with a Ravenwing Bike Squad and started building a Sisters army!

Great work on these- I like the bone and gold combo on the ven. dread

Good job on those sir. I especially love the Gravis captain in Deathwing colors. Interrogator Stobz is going to have a heart attack with both of his hearts when he sees that! ;p

So, I've had a search for this question, but can't seem to get a consensus (and I may not here, but it's worth an ask!)

I'm building a Land Raider Crusader for my Deathwing. What colour should I do the gunner? Green, Bone or Red? At the minute, I'm leaning toward Red with a Bone-coloured shoulder, but that seems to not mesh well with the lore, given the DA's general distrust of Mars.

Green body, with a red-shoulder pad (the mechanicus shoulder).

Need to keep practicing painting bone, I have the DV terminators primed, they might be my next addition to the Deathwing. 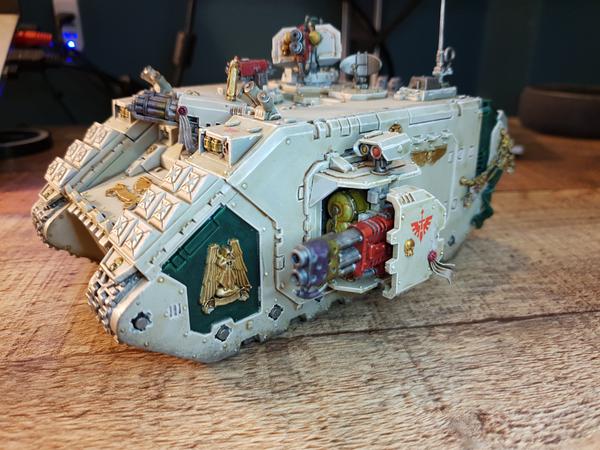 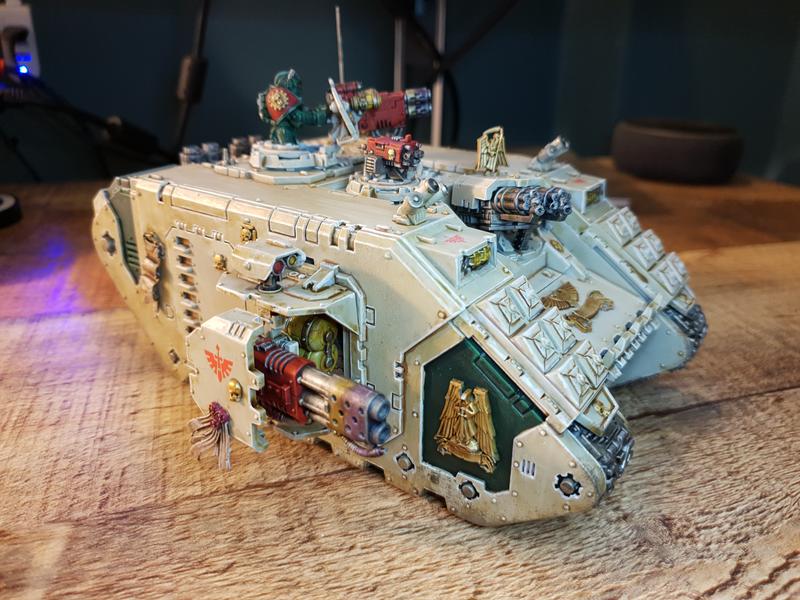 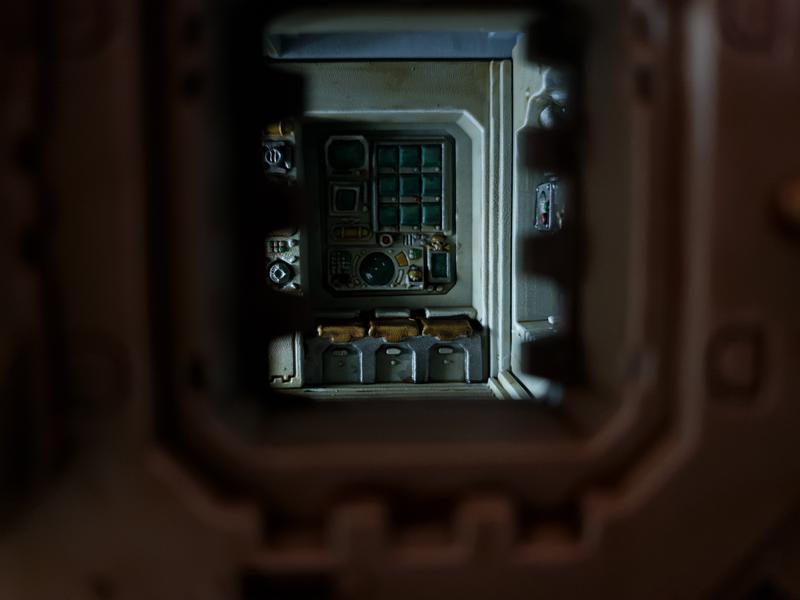 Painted up the Limited Edition Master - absolutely love this model. 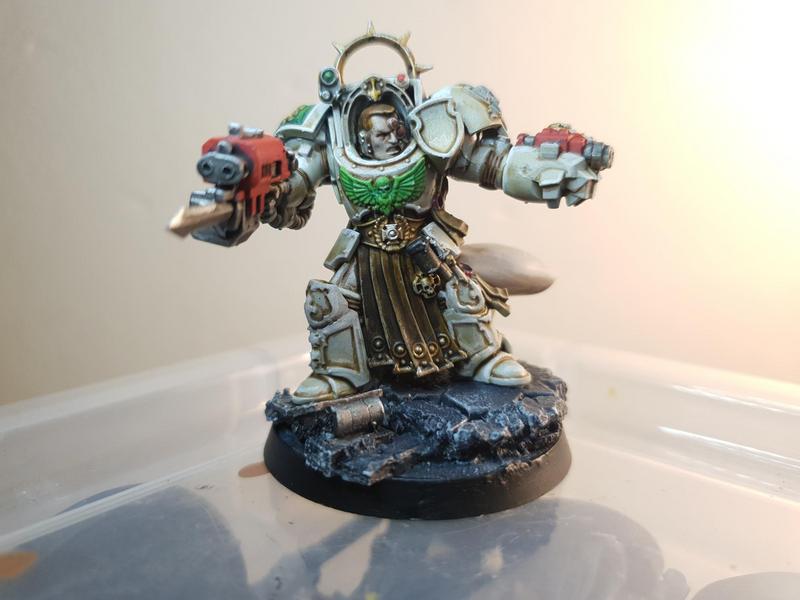 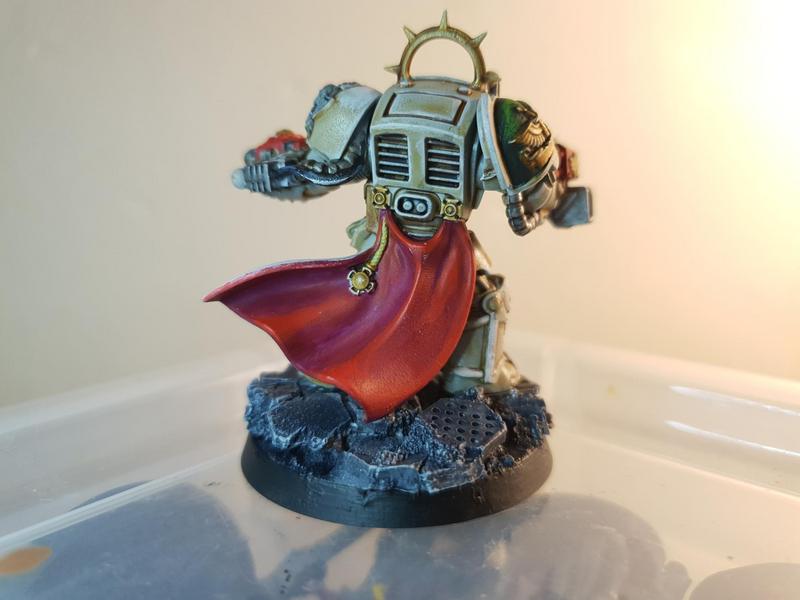 Also tagged with one or more of these keywords: unforgiven, dark angels