65 replies to this topic

My Swedish Armed Forces but in a Astra Militarum design.

My army is based on the Regiment that I've spent 15 years in, Skaraborgs Regemente P4 (P for Pansar/armoured), and the Swedish 2nd.brigade. I have spent 12 years as a NCO and will most likely spend more.

I build my forces as a Swedish Brigade in organisation, but not in numbers. Recon company, mechanized inf companies, LR tank companies and so on. Everything have to have a Swedish connection. Chimeras are combat vehicle 90 (CV90), LR are Leopard 2 (strv 122), only exception being Hellhound which I can't think of an equivalent of.

Most are bought via Ebay equivalent in Sweden and so are rescues. 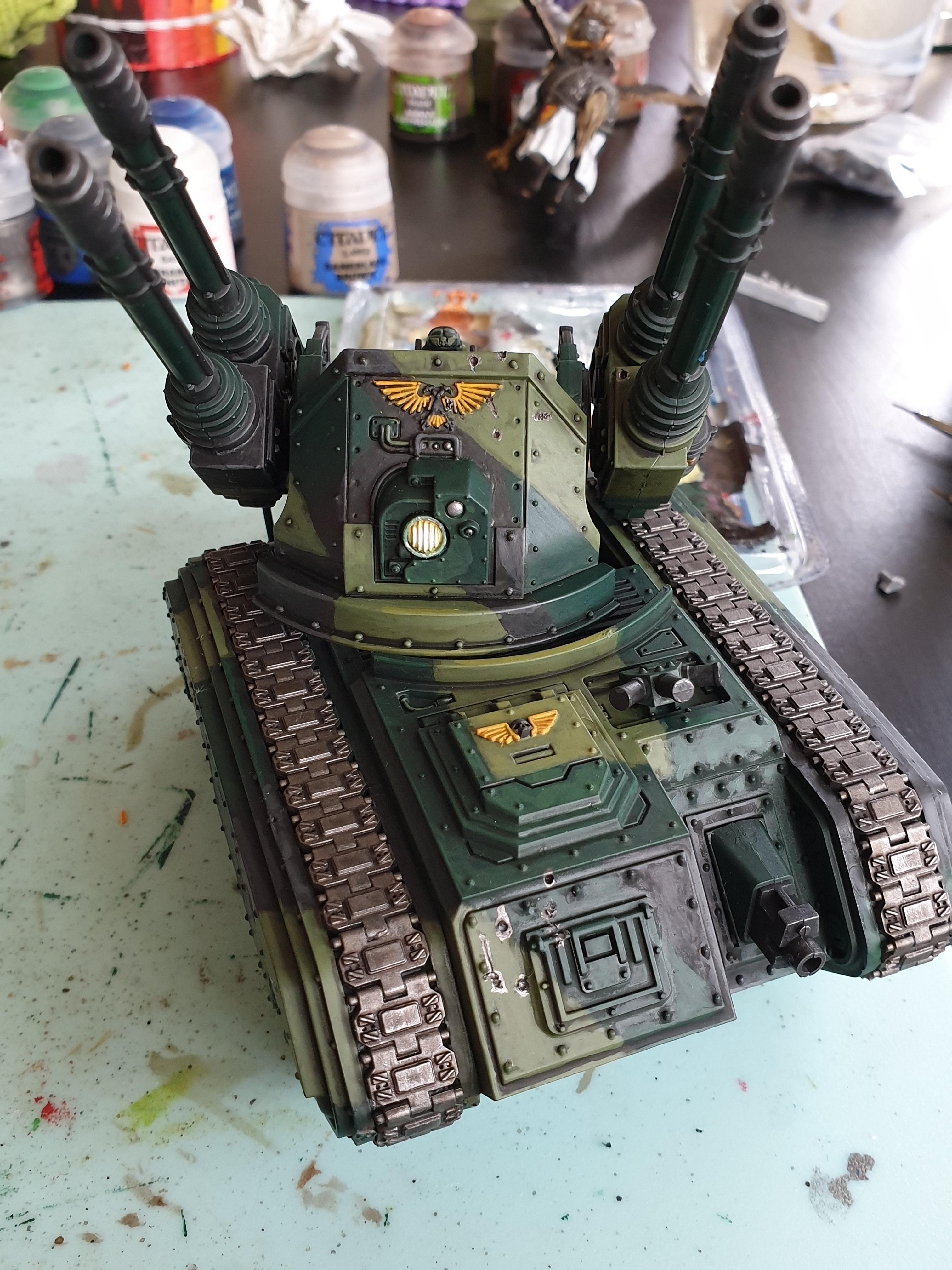 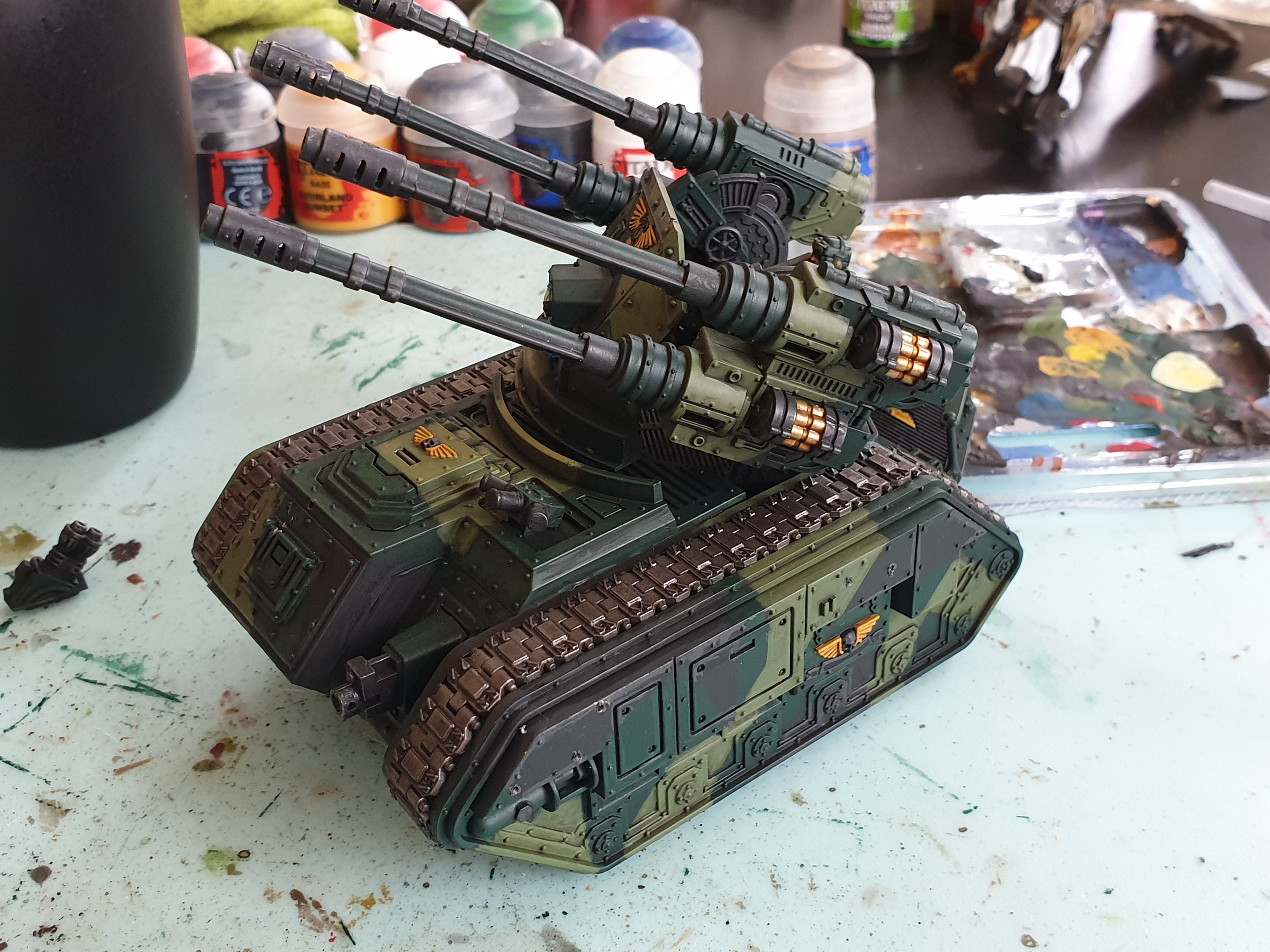 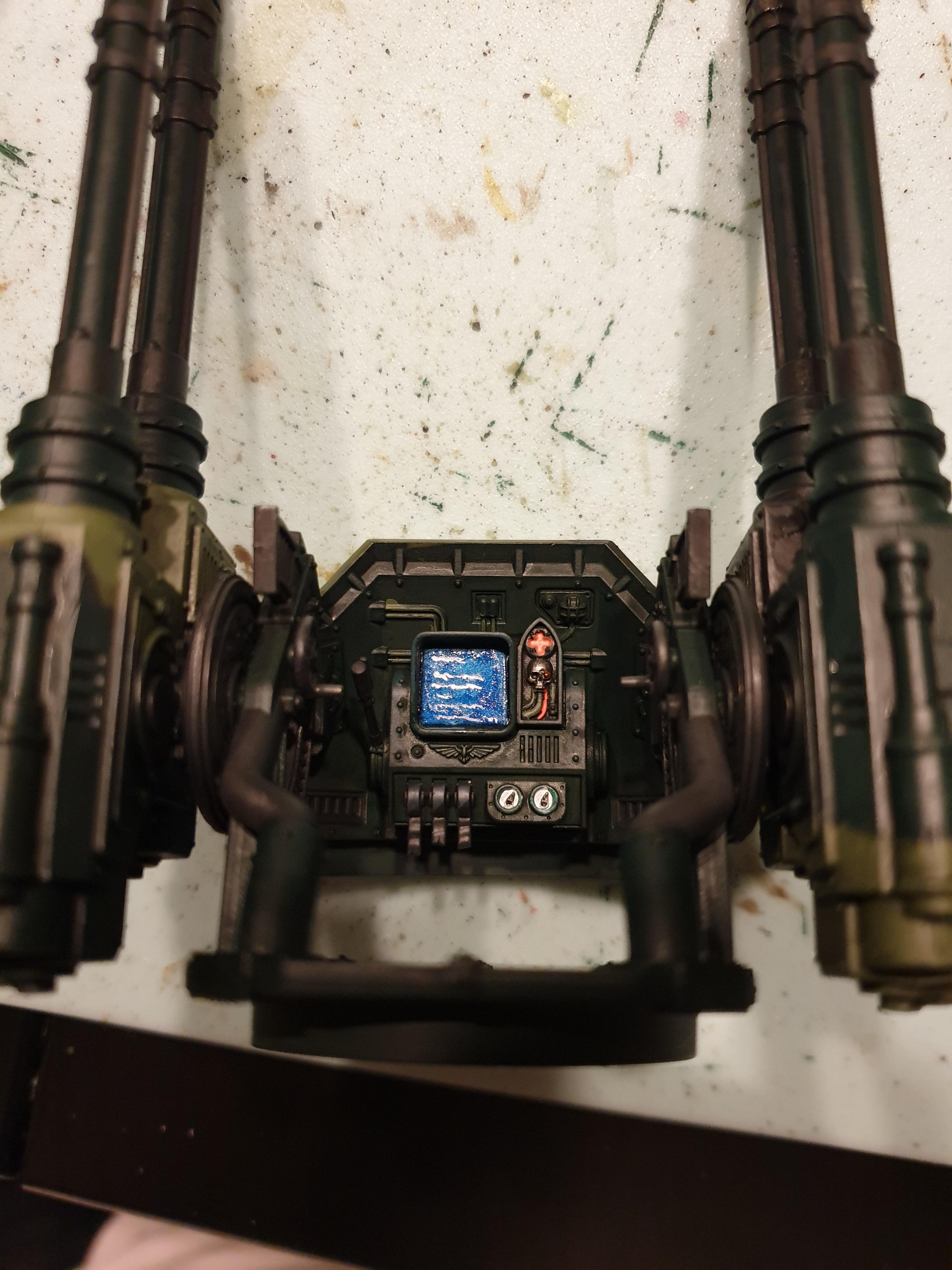 Even in the 41st millennium blue screen is a problem

Rescues are doing the Emperor's work! The colours look very nice I could see the influence, will you be doing the same for infantry? Keep us updated with your progress

Always love seeing stuff like this. I can’t wait to see your Infantry and as a treadhead your tanks!! Great job.

My infantry, three squads so far. 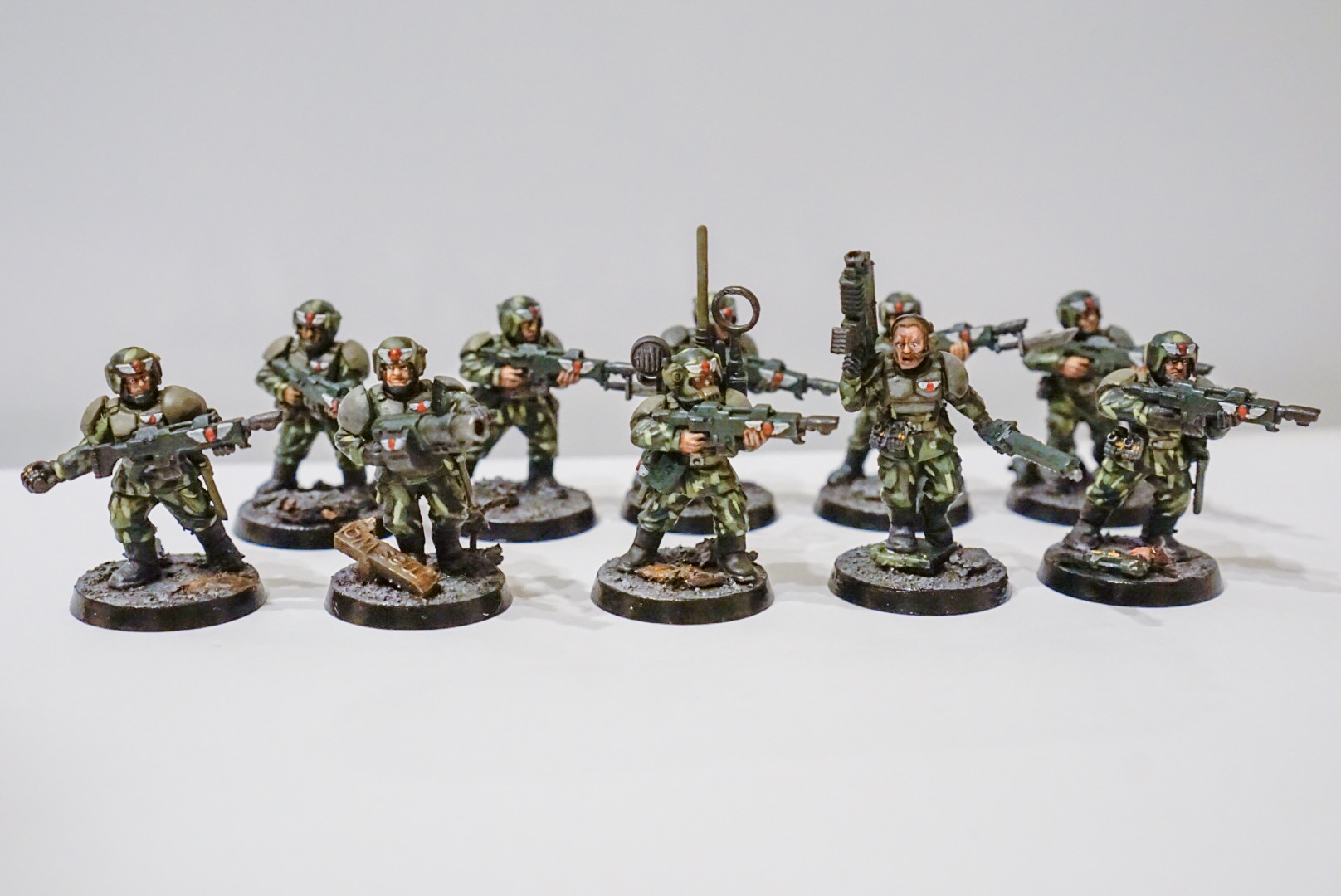 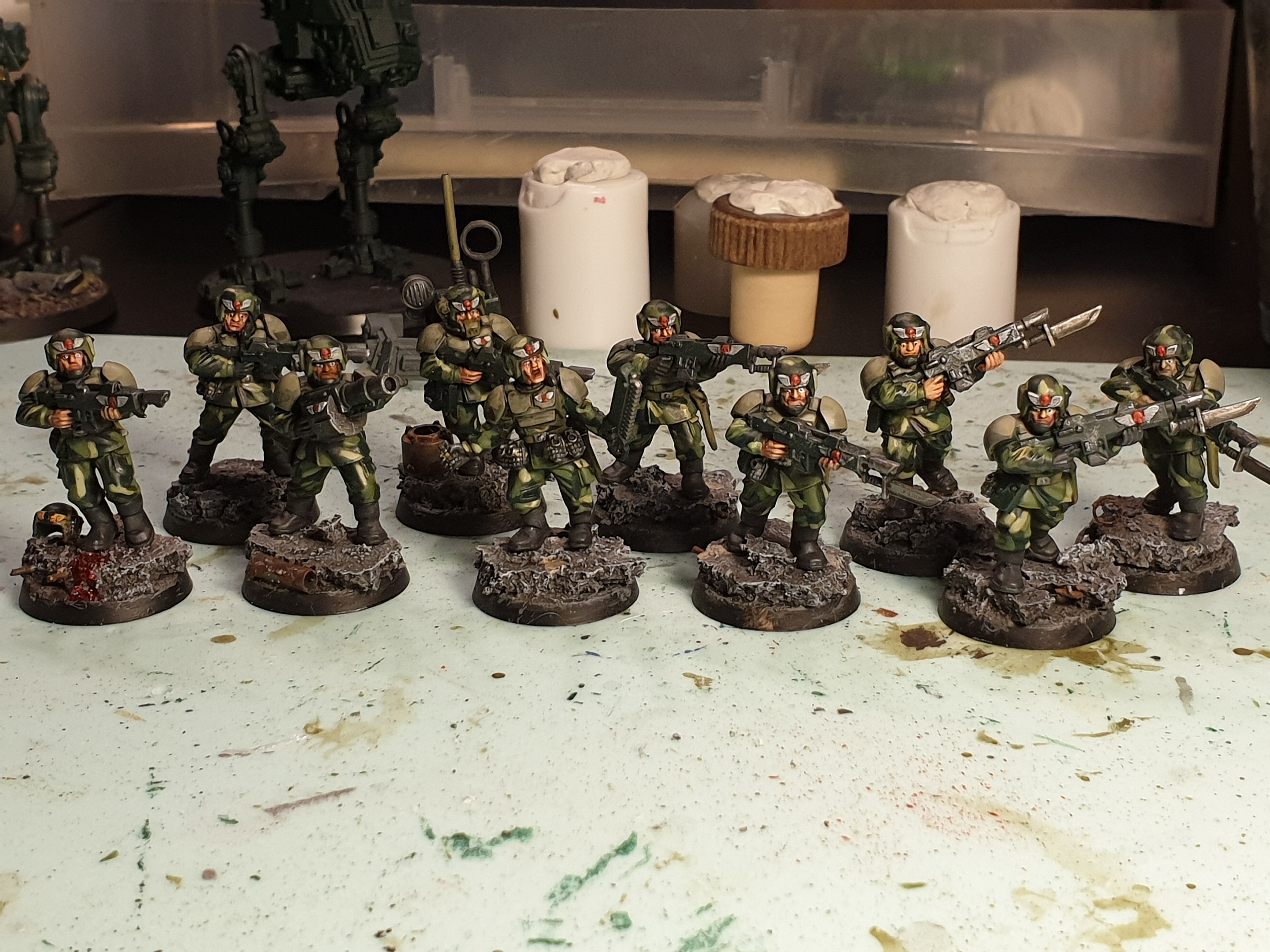 These two have my company colours (red/white) because I thought of doing three such squads but have since decided to remake them to the regiment colours of black and yellow and save red/white for my veterans.
These two have vox and grenade launchers, one sergeant has a boltgun. 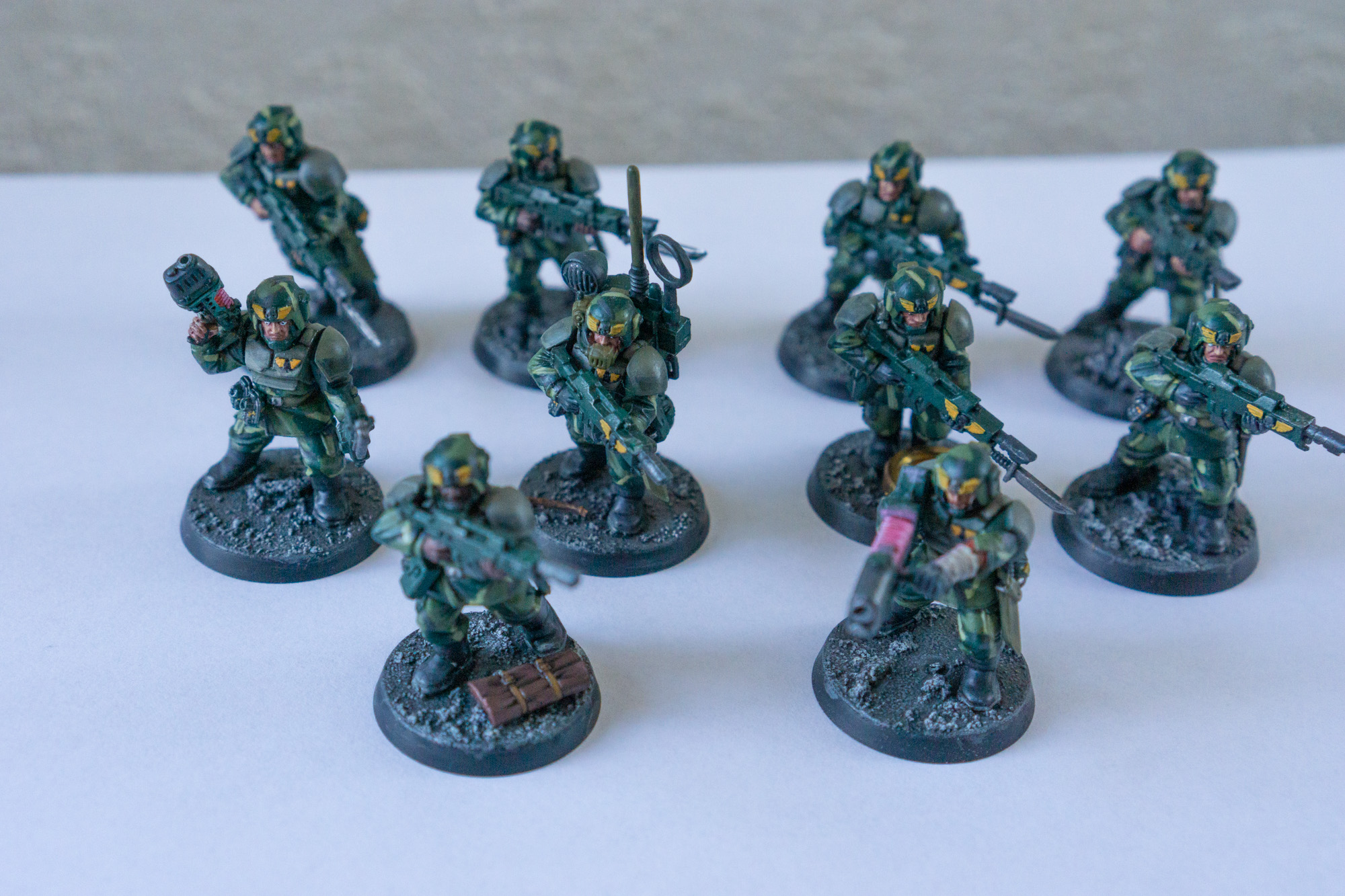 This squad has the right colours and have plasma on sergeant and specialist and also a vox.


A fourth squad is in the making, female only. Will mix them into the other squads. They are in the 12 month challenge. 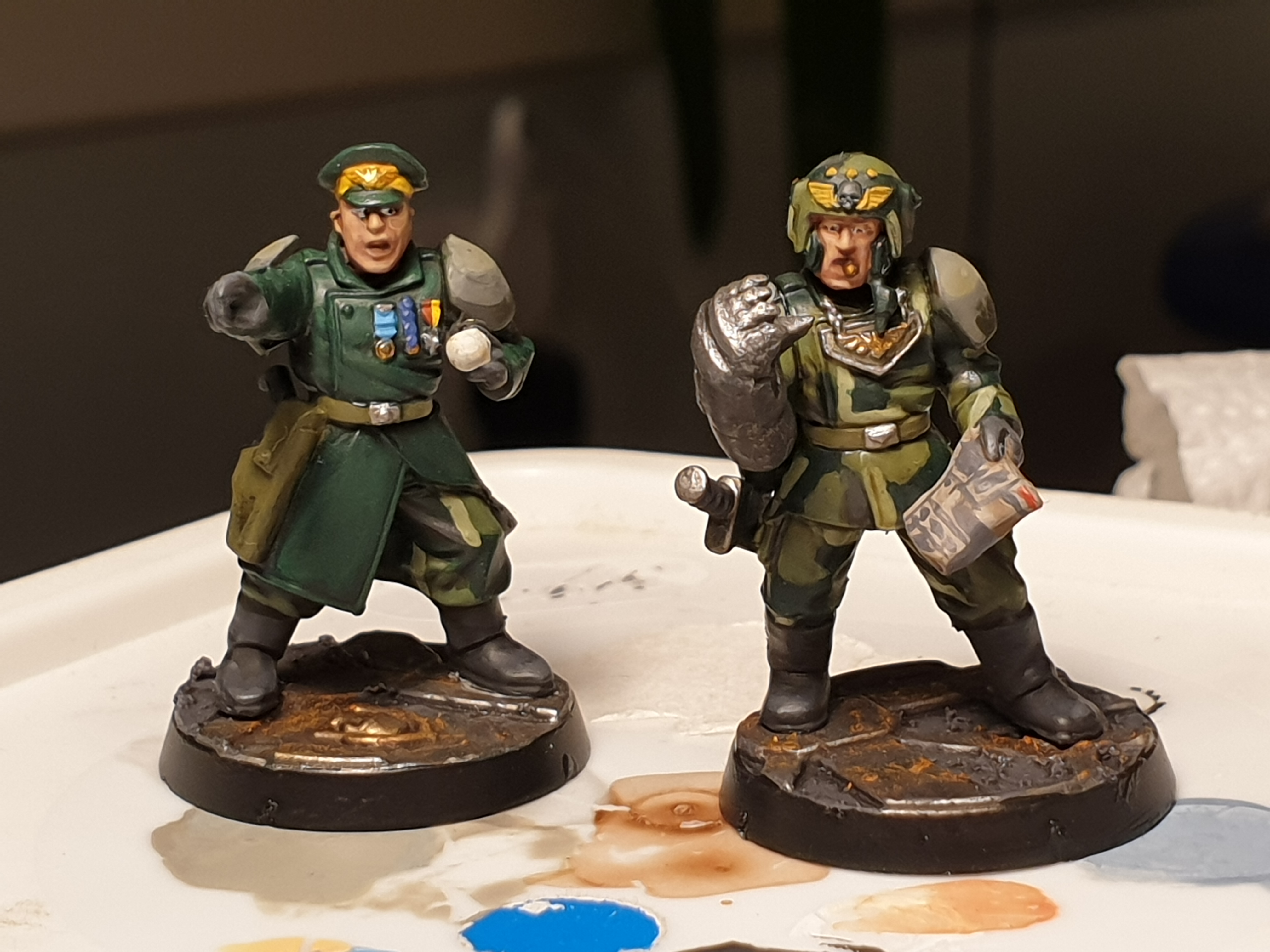 The platoon commander with powerfist (that has since picture was taken a less shiny fist) has regular swedish M/90 camo on his clothes but for the commander I went back to M/52 that is out of use but more befitting the model. 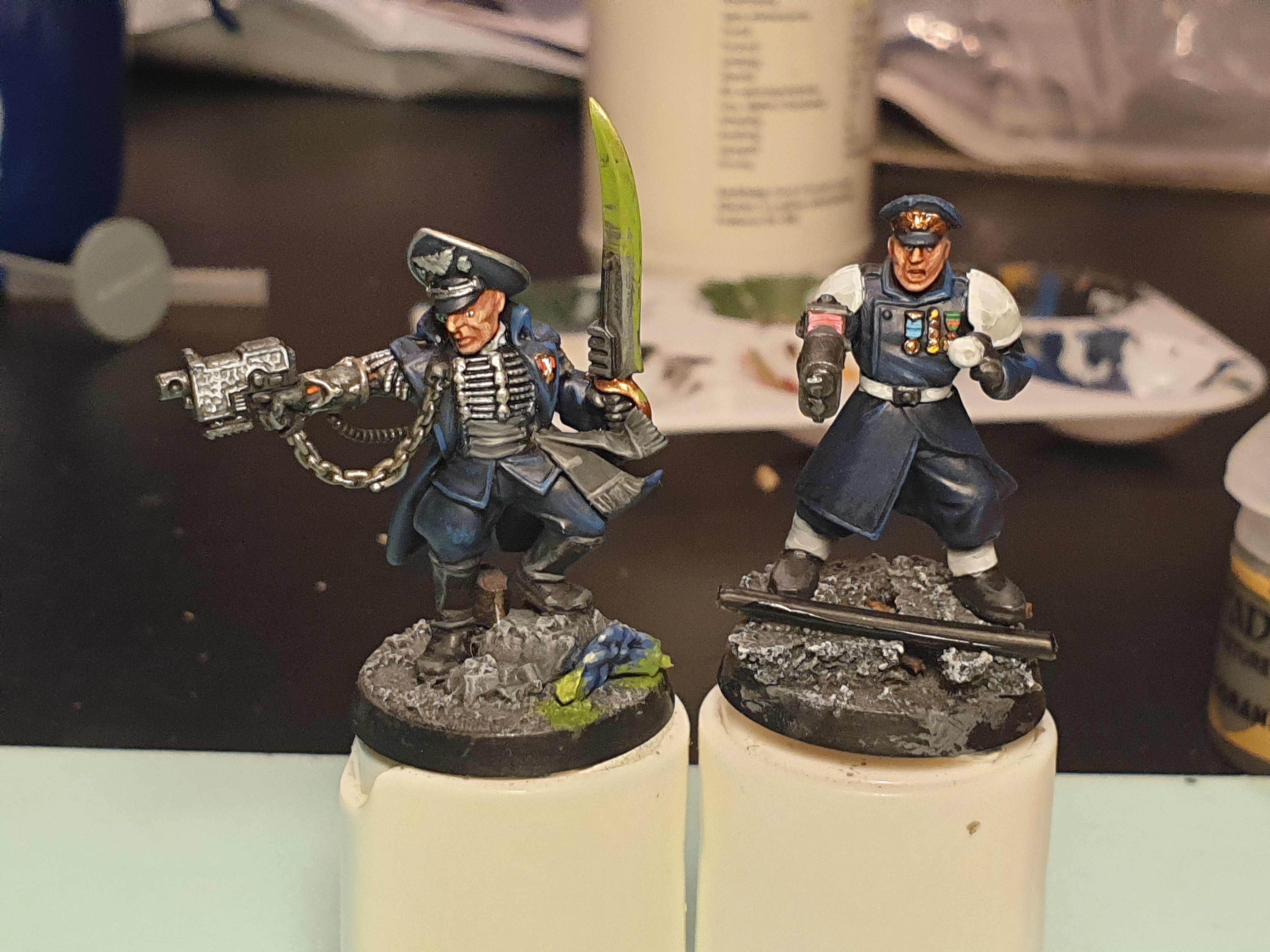 For commissar and company commander warlord I chose our dress/parade uniform M/87. The commander, being the leader of the regiment/brigade he has gold details but the commissars in my mind come from the Emperor's troops and in Sweden the king's troops have silver. Yes, the irony in that the Emperor had a golden armour has struck me.

And sorry for the varying picture quality. My wife is good with a camera, I use my phone. 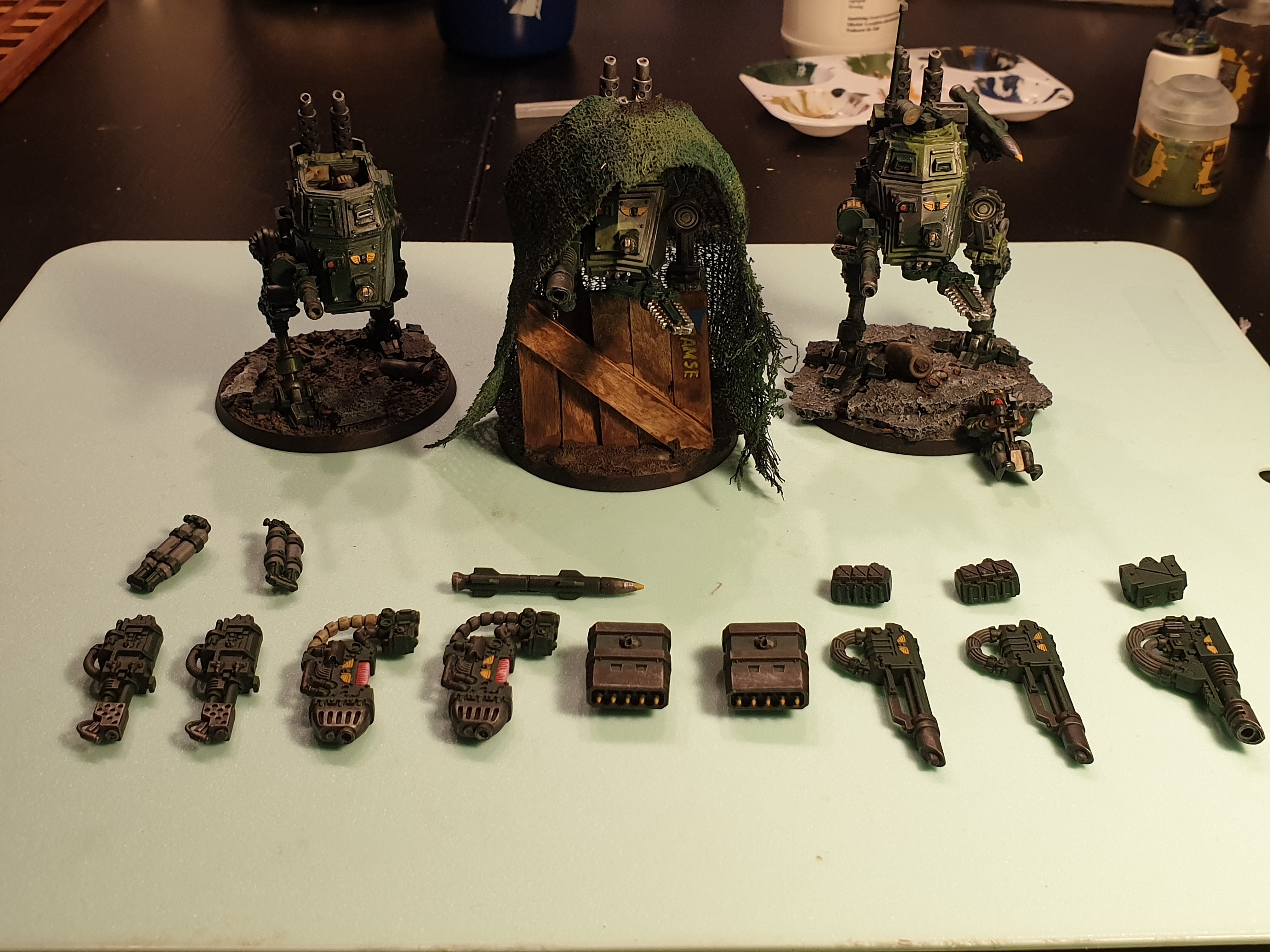 All magnetized. The one on the left is an old metal one (only autocannon for him) with a funny Forest Gump fluff for the driver. 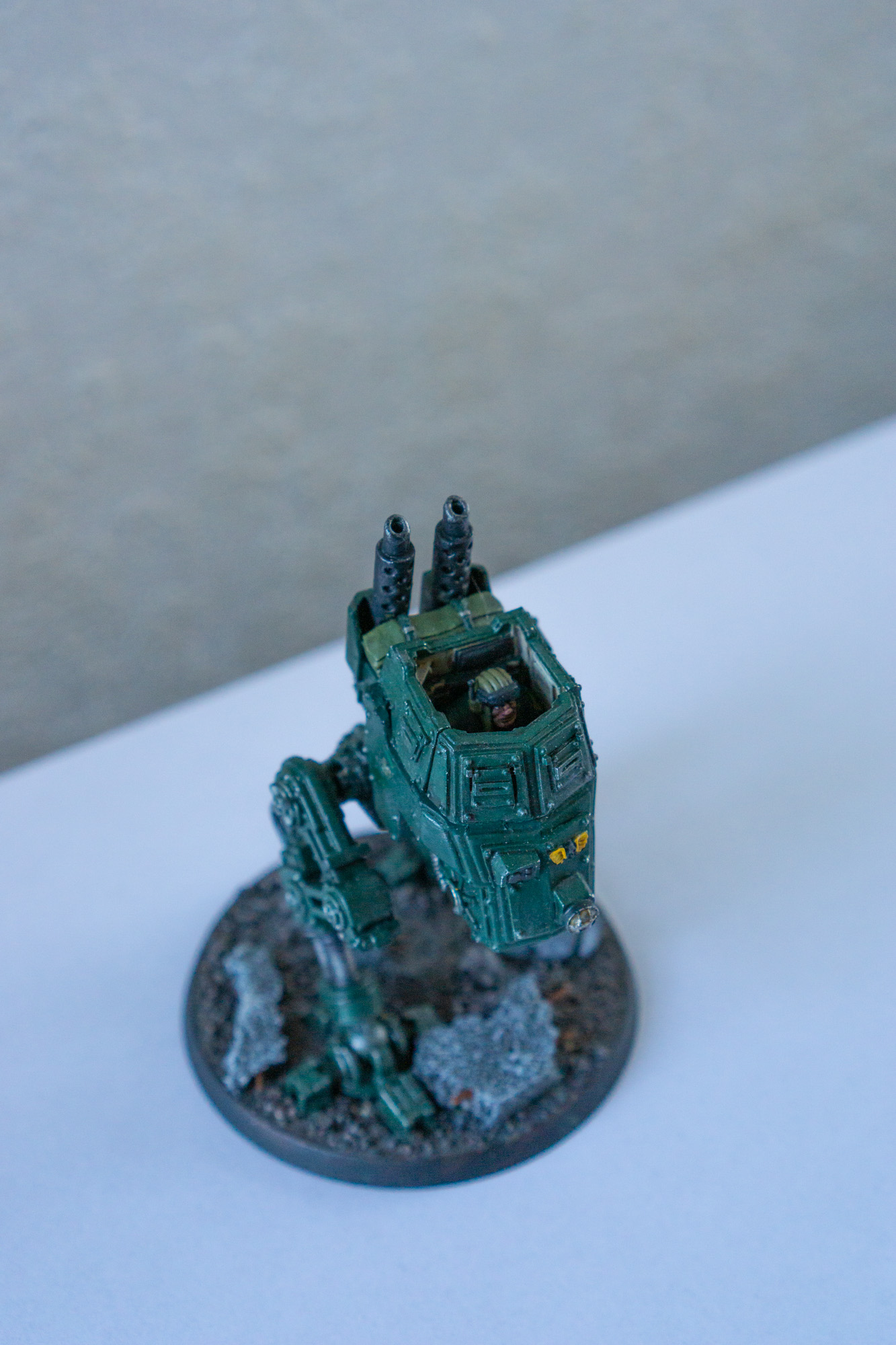 If you zoom in you might be able to se his deep face, the nose was almost completely flatt which made him look hilariously. 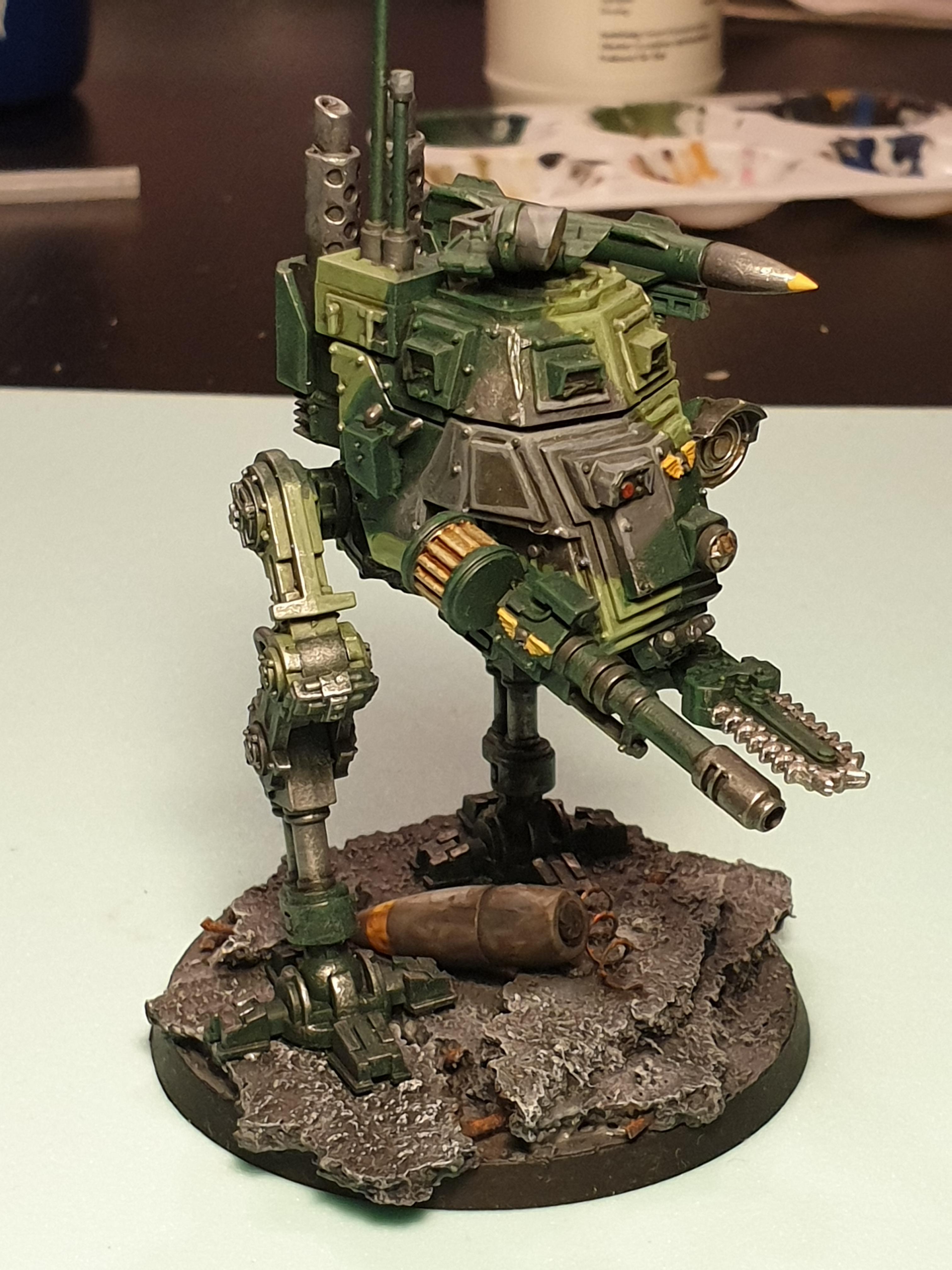 Real 7,62 bullet on base as unexploded ordnance. 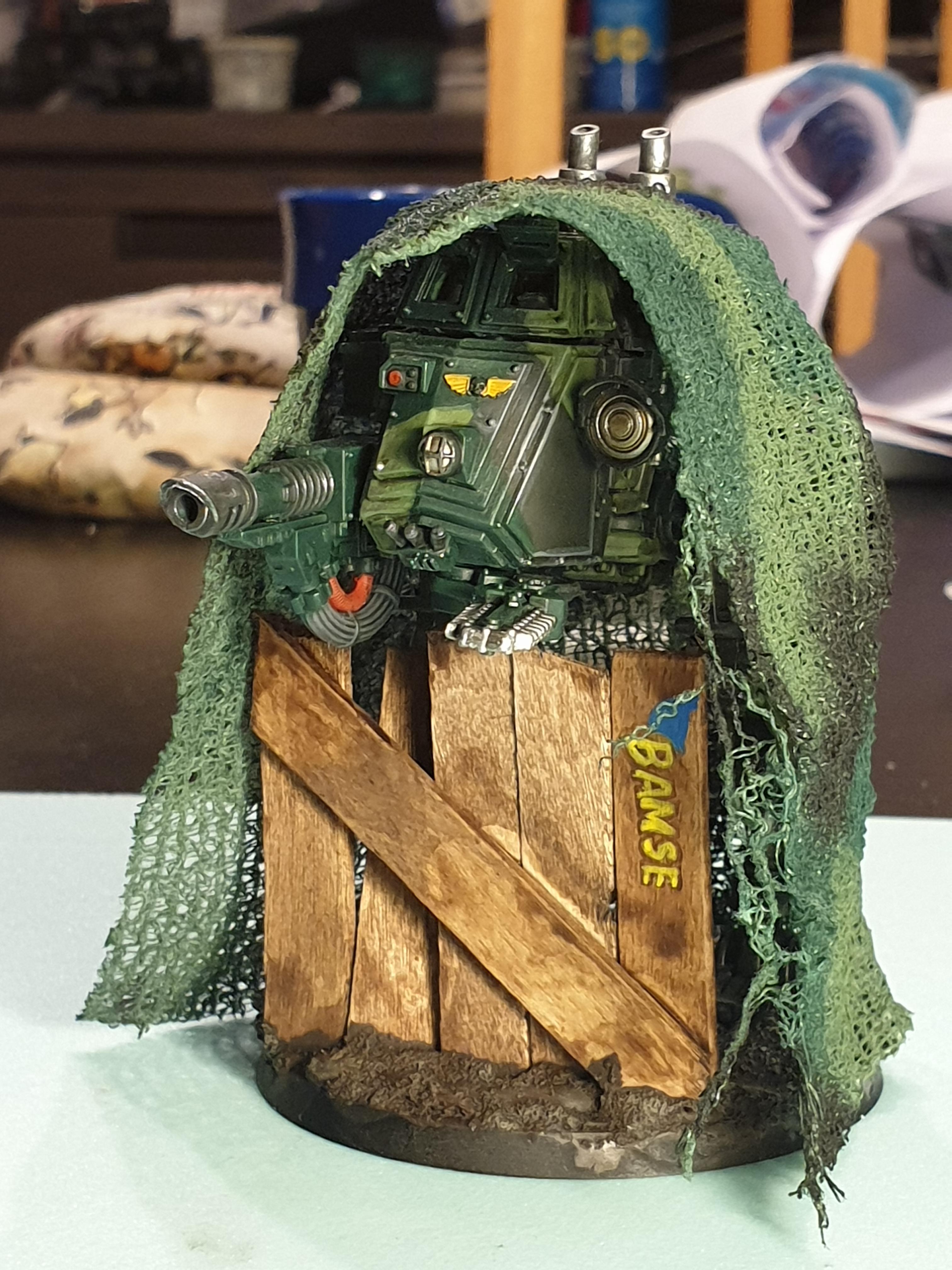 Bamse is a Swedish socialist bear, kids comic, my son loves the ice cream and wanted to contribute. 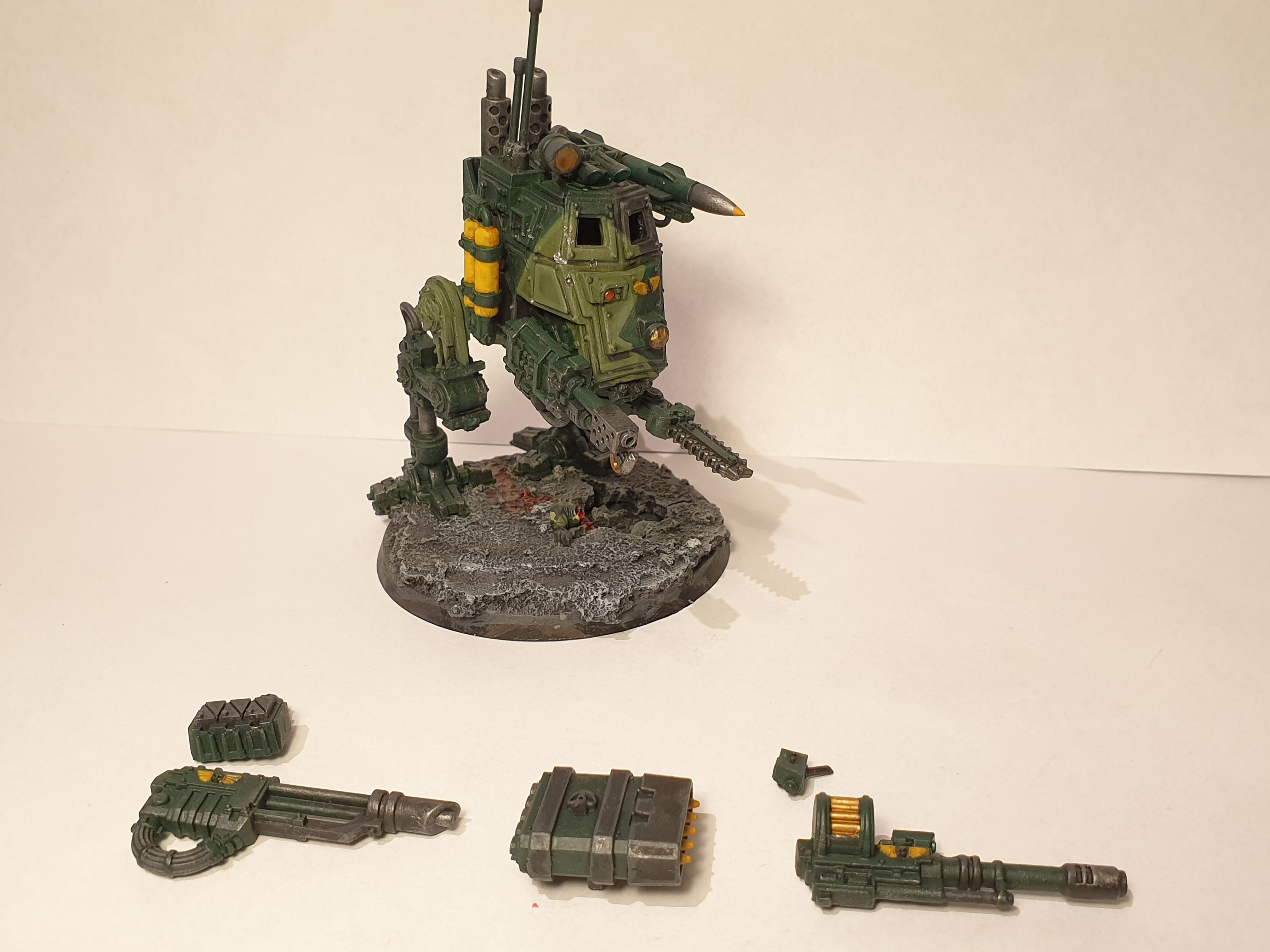 Latest sentinel, missing stone options but recently acquired some so will fix.

Finally from the chimera challenge thread: 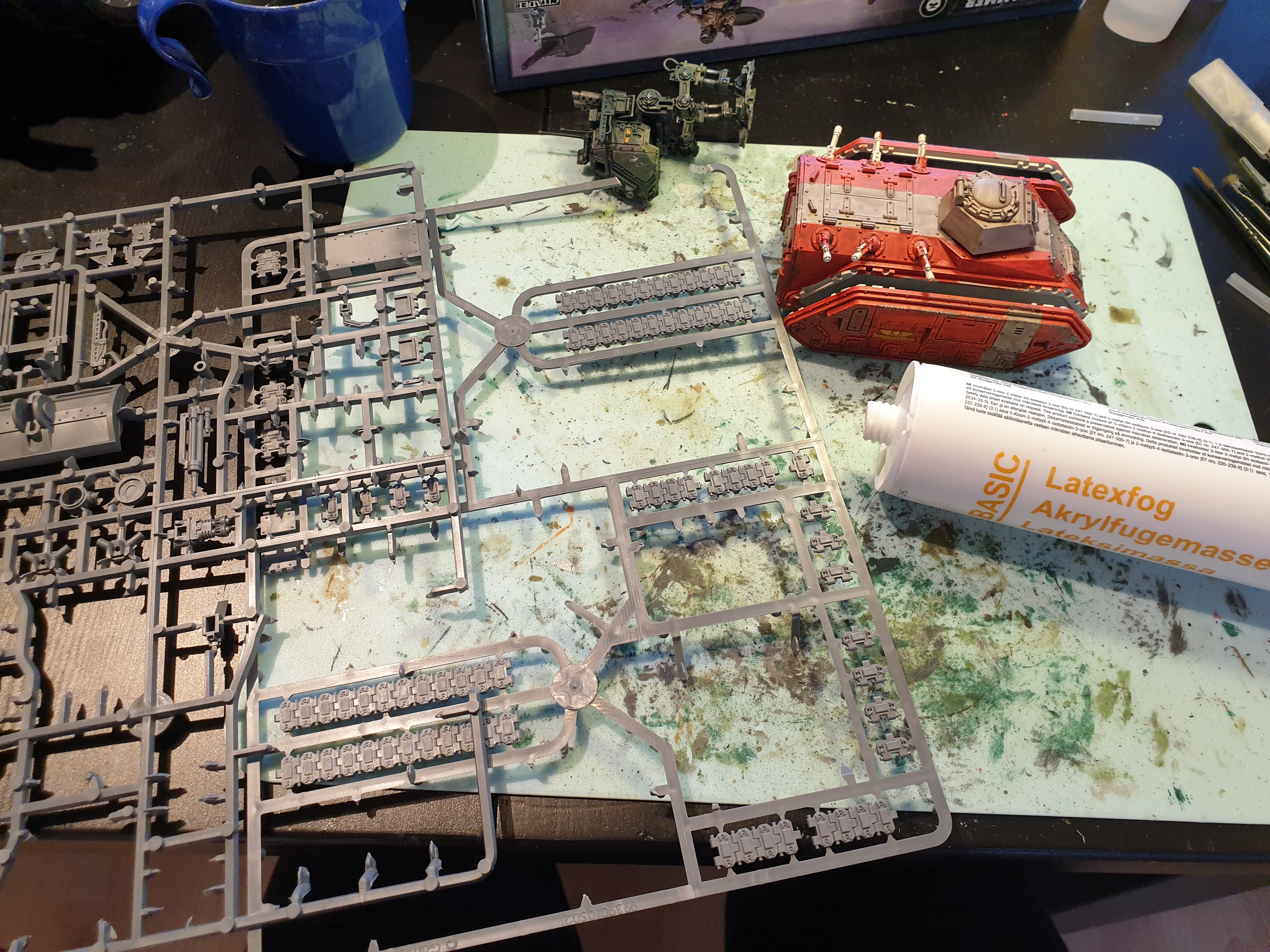 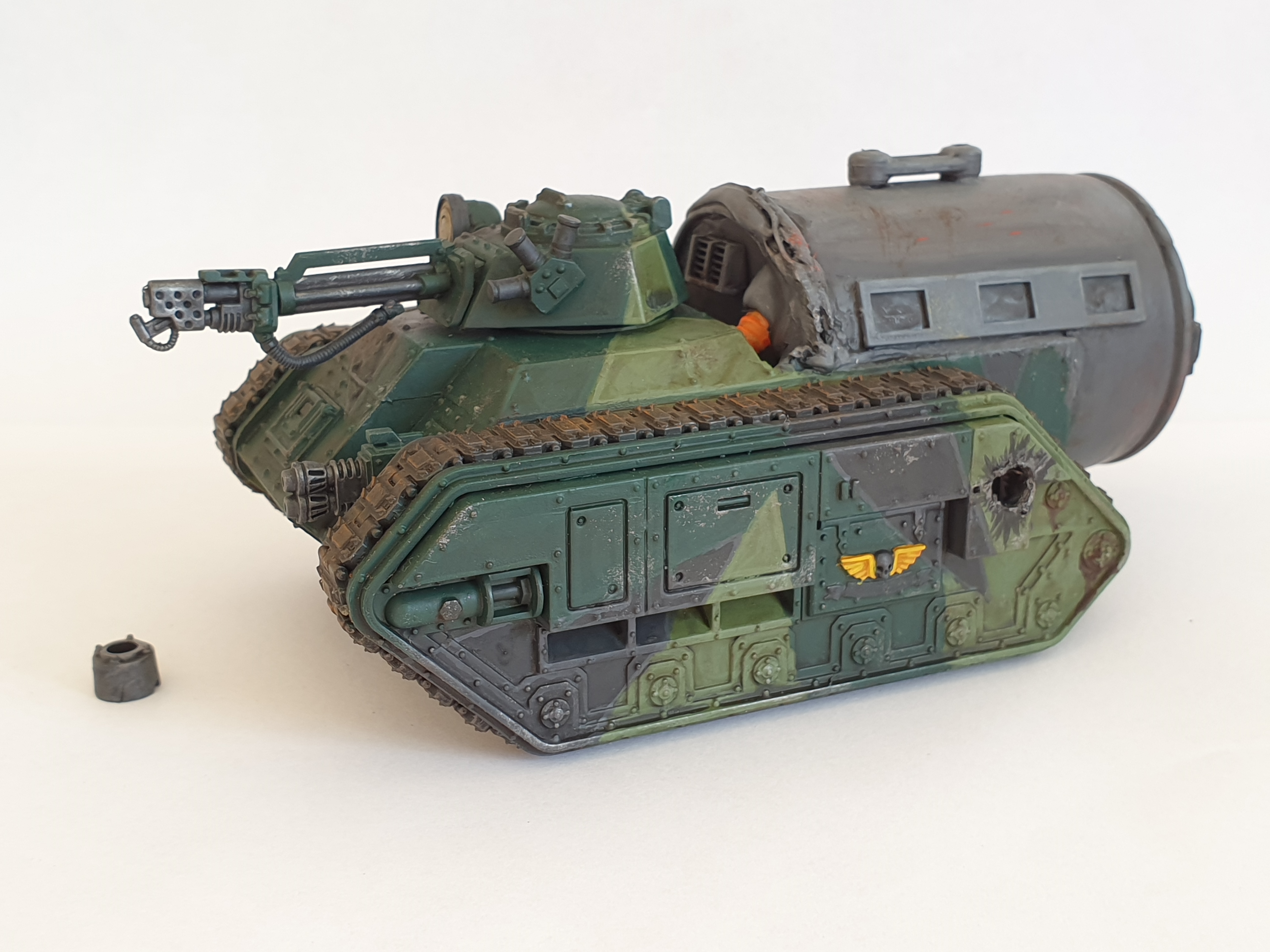 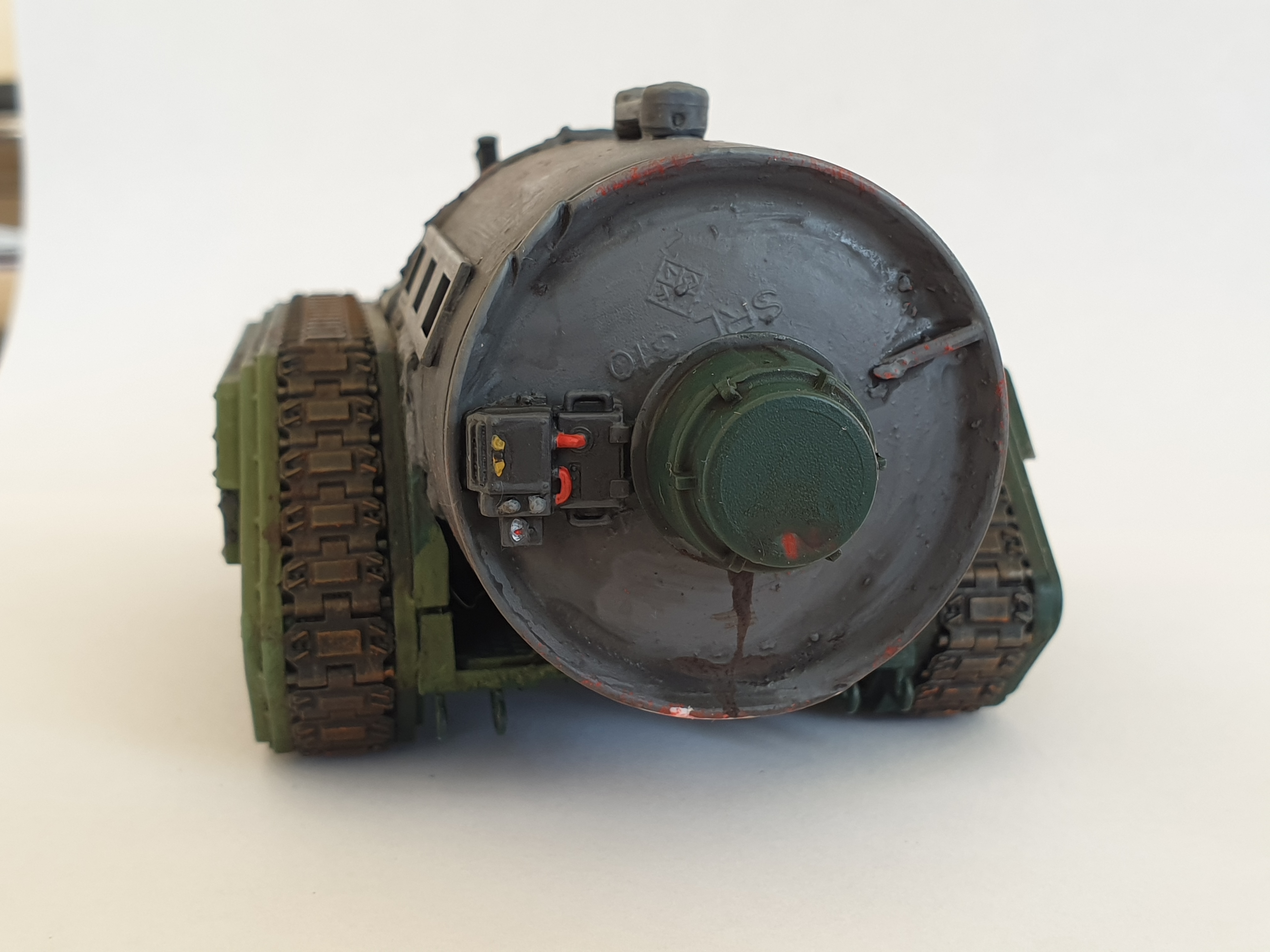 Good job on the Sentinels. Is Bamse waiting to ambush approaching enemies?

Yeah well, Bamse is acctually the name of a Swedish anti-air missile so would have been more fitting on a Hydra or Manticore. Since Bamse is the world's strongest bear a sentinel powerlifter might be fitting though. 😁

That’s a great themed force you're putting together.

Until the Sword is reforged

Excellent job - look great - I really like the infantry squads in particular.

I am creating a custom regiment, the Fallax Hammers based on Necromunda models. Please take a moment to view Work in Progress here

Great work on everything

Like the Sentinels the best, they're one of my favourite IG models and you've done great job on them
I like the ammo on the base and the reference to your kids comic

Can't wait to see what's next

Let's go for the dedicated transports:

First up is a trusty chimera. 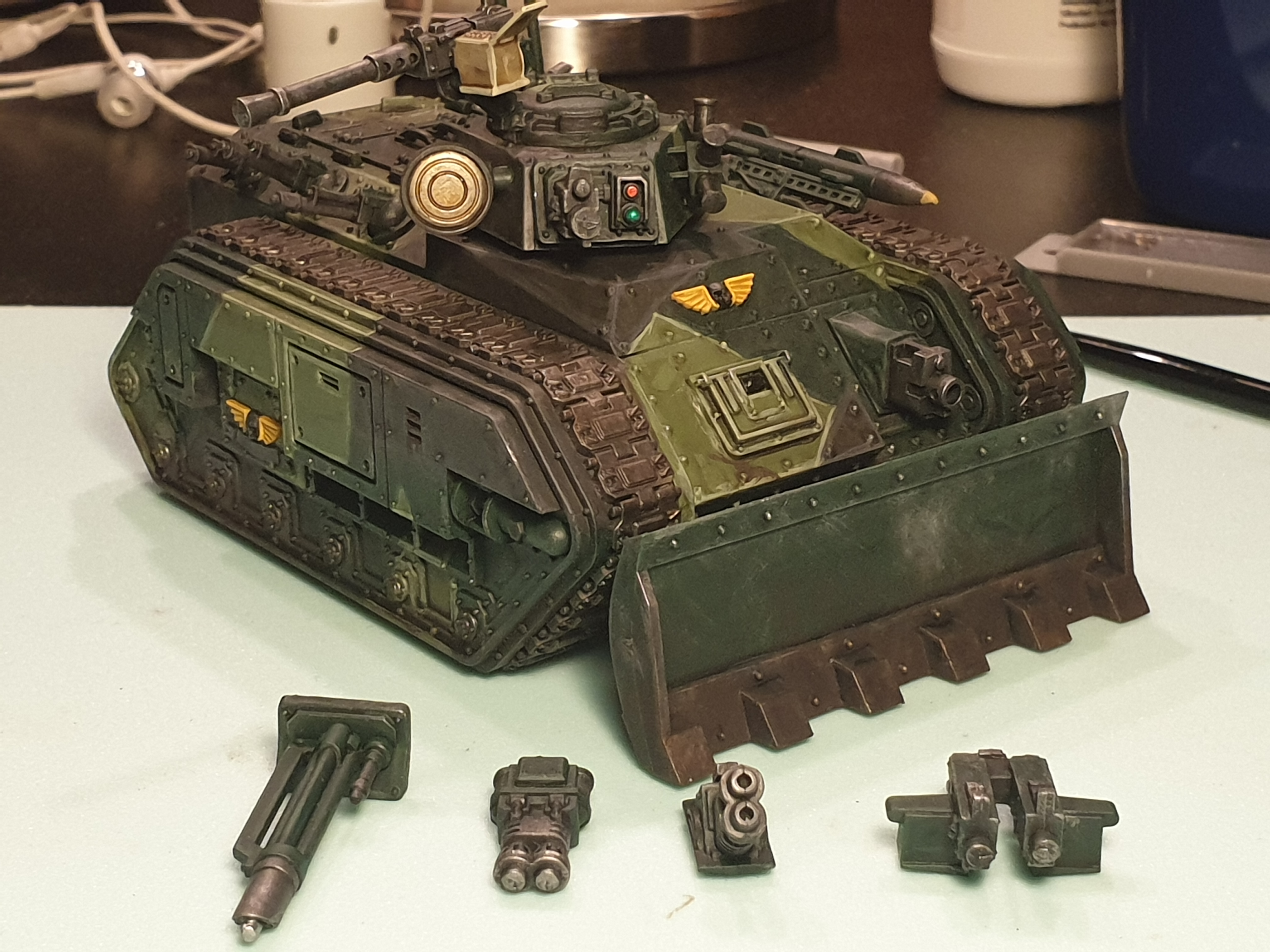 Very fun to make and soon after it was done I started with another. Will come back to it though, to make it also work as a Gryphonne pattern variant.
Oh, and I also drilled holes in the weapons since picture was taken. 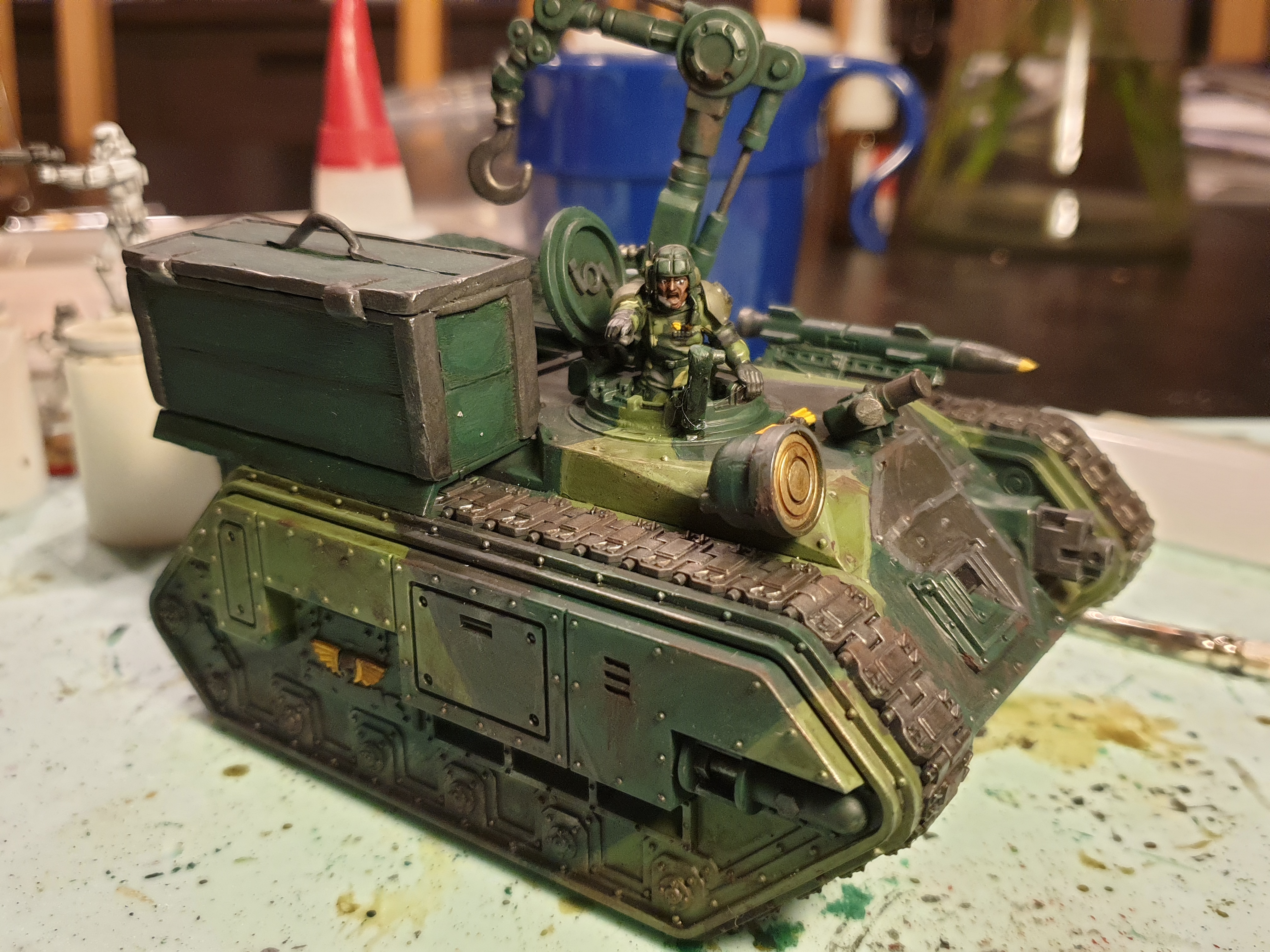 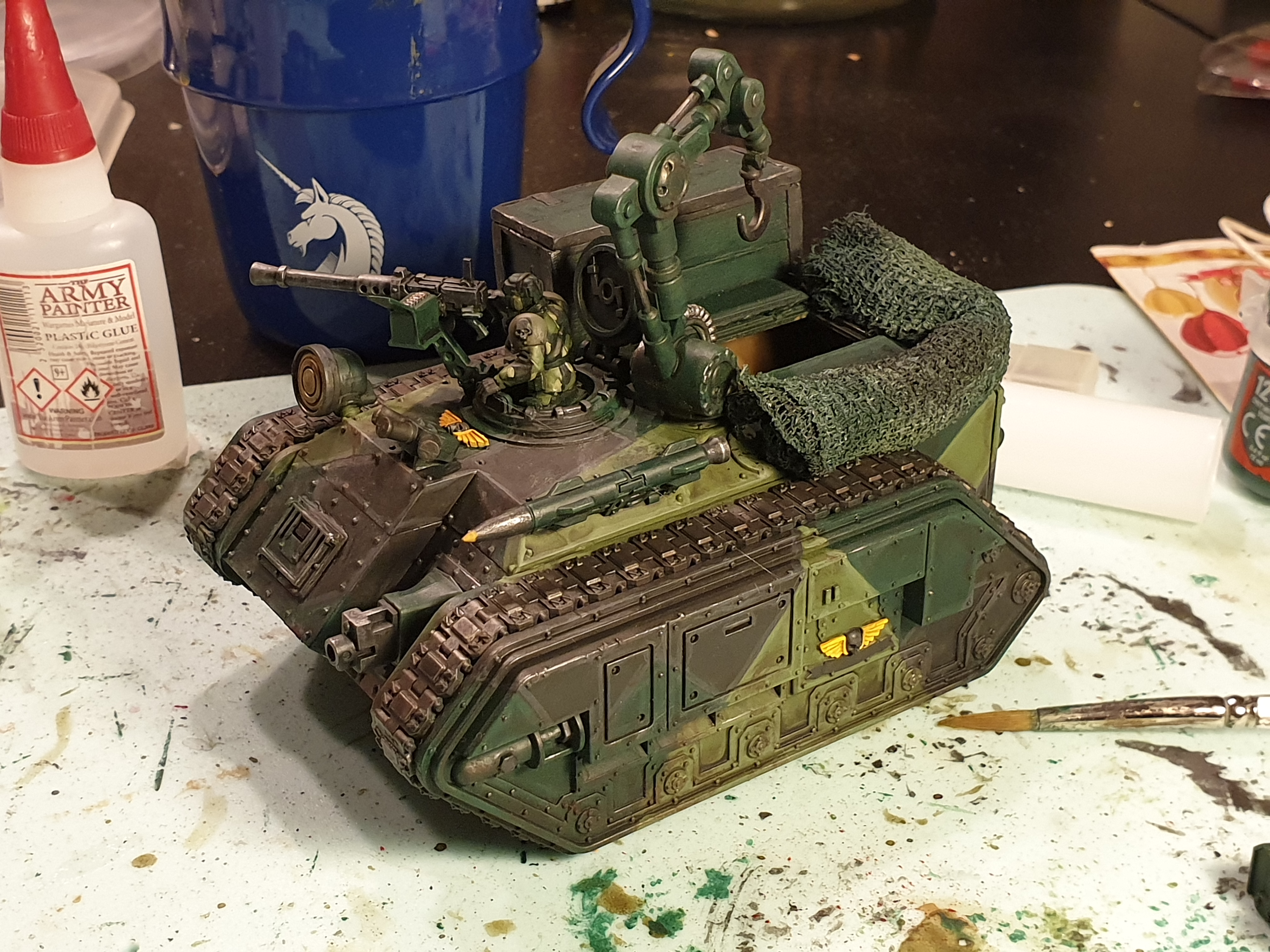 Trojan support vehicle! I saw the rules and fought it would be a good addition and also very befitting my Swedish theme. Every company has a CV90 DSG, maintenance support group roughly translated. It's more a repair group/vehicle so the Atlas has more fitting rules for a DSG but the chimera is my CV90 equivalent chassi, Trojan fits fine enough. Will for sure build a Atlas later on.

Great work, the camouflage pops along with all the extra detail and work you've put in keep the updates coming!

Good job on the Chimera and the Trojan.

You do such a superb job with the camo netting bro. Keep it up.

Thanks all! I really appreciate it. If there is also any criticism to help me get even better or just a tip to improve anything let me know. This iis my first 40k army, having played and painted Warhammer Fantasy (no Sigmar) and 9th Age Fantasy Battle only so far.

Something new today instead of posting things I've done months to weeks back. (Started 40k in October last year) 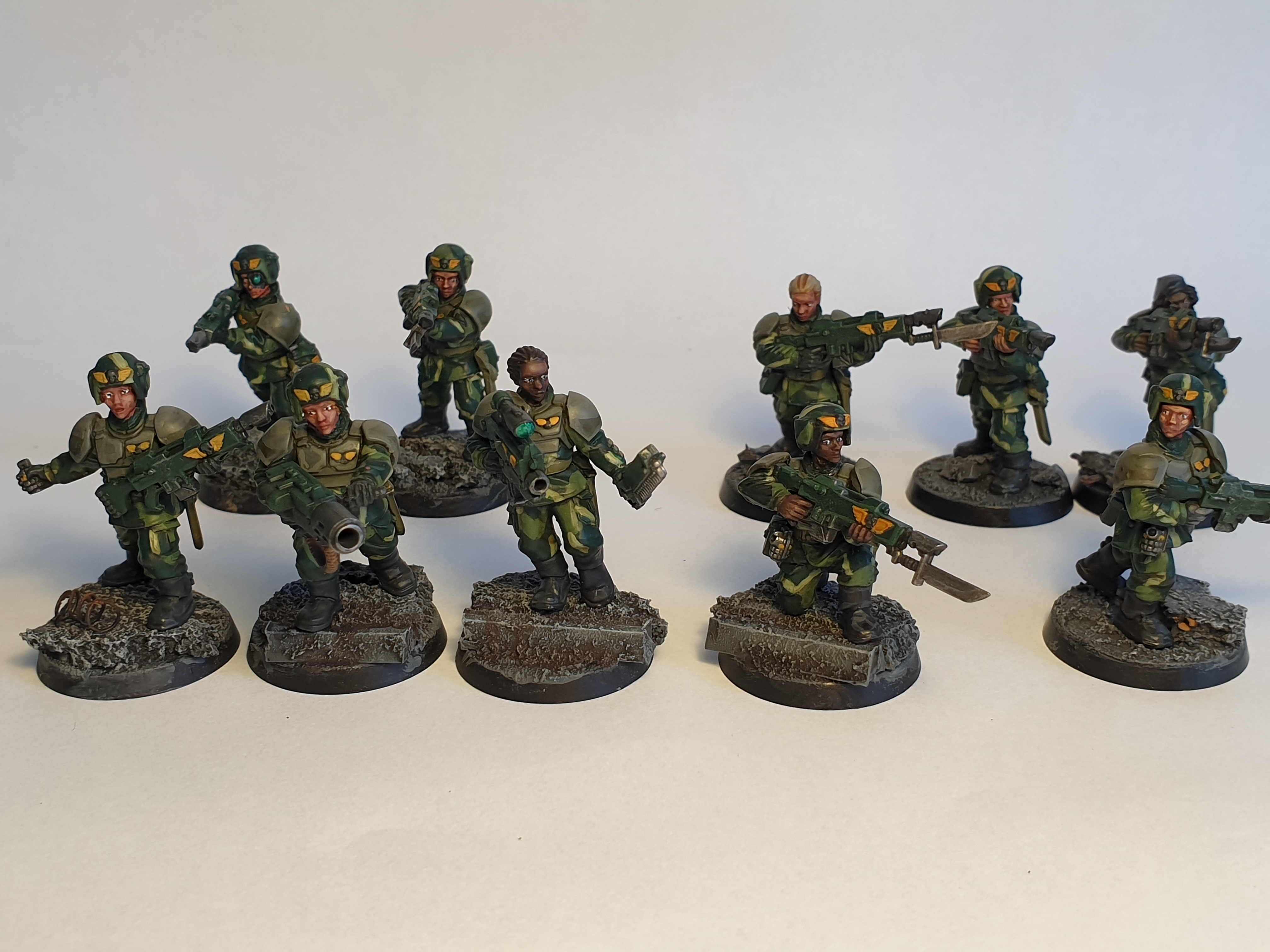 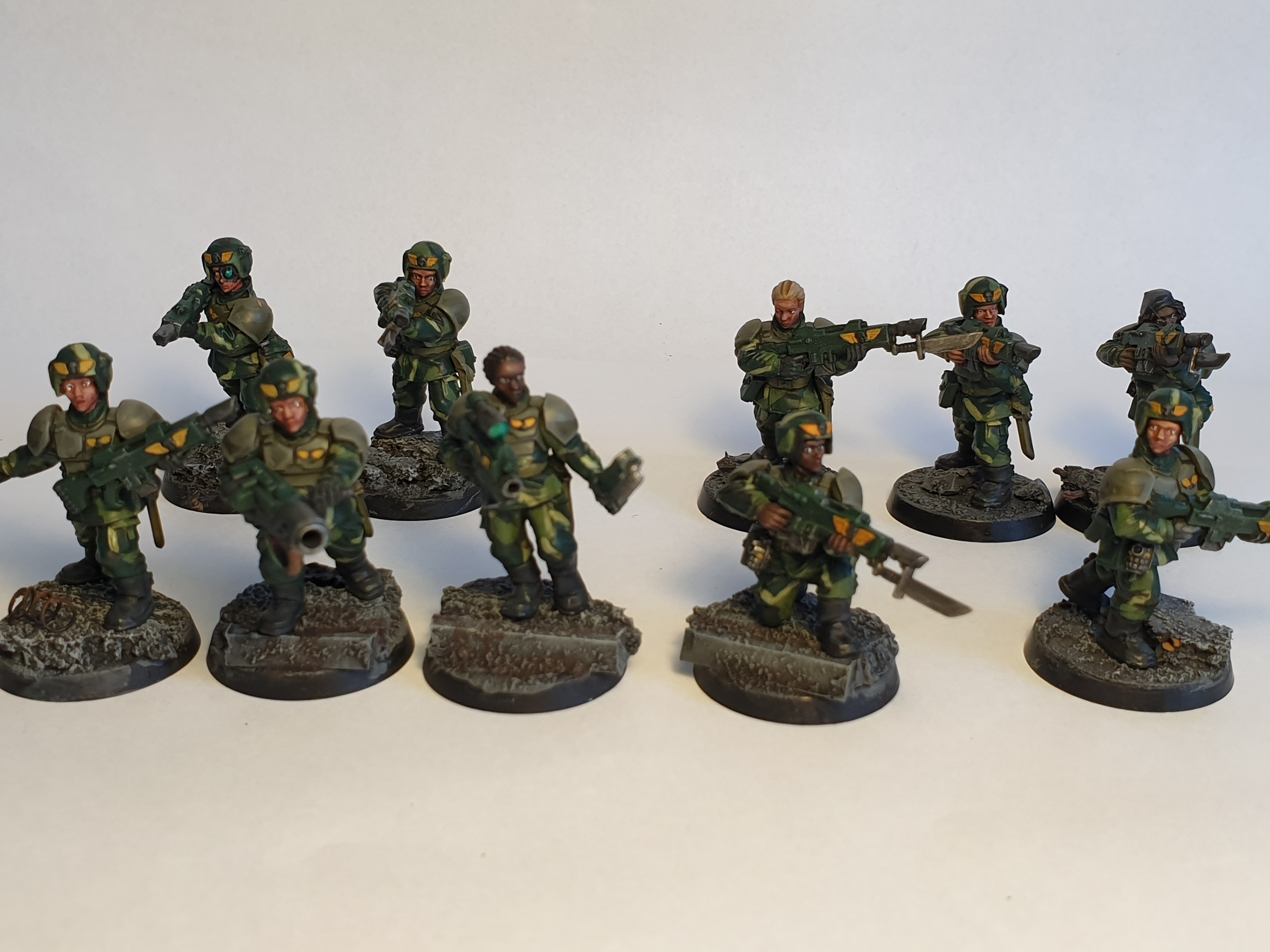 Ten cadians converted with heads from Statuesque Miniatures. How they were made:


Hidden Content
A WIP of my female cadians and how I do them. 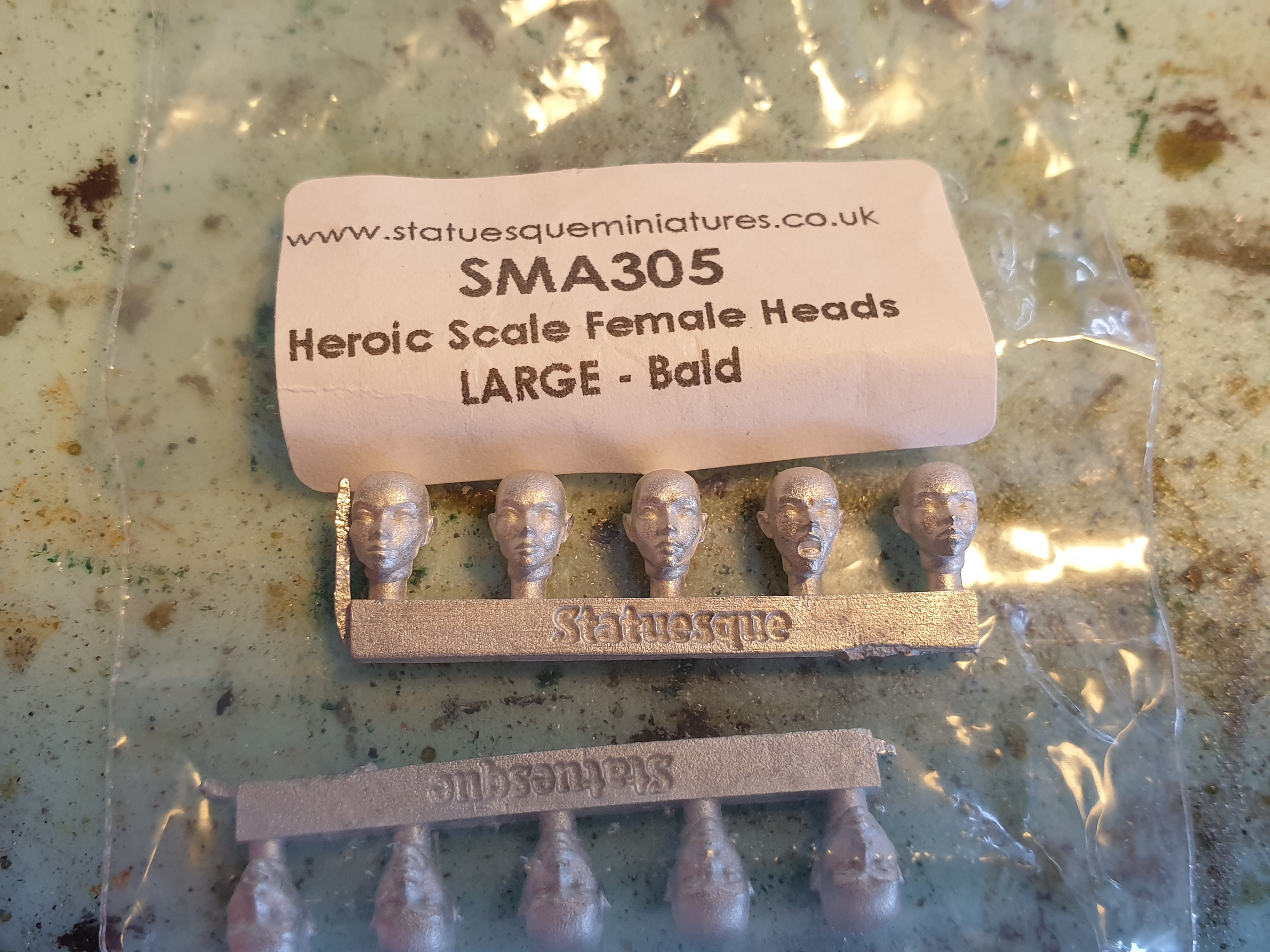 The heads are from Statuesque. The balds are to have regular cadian helmets. 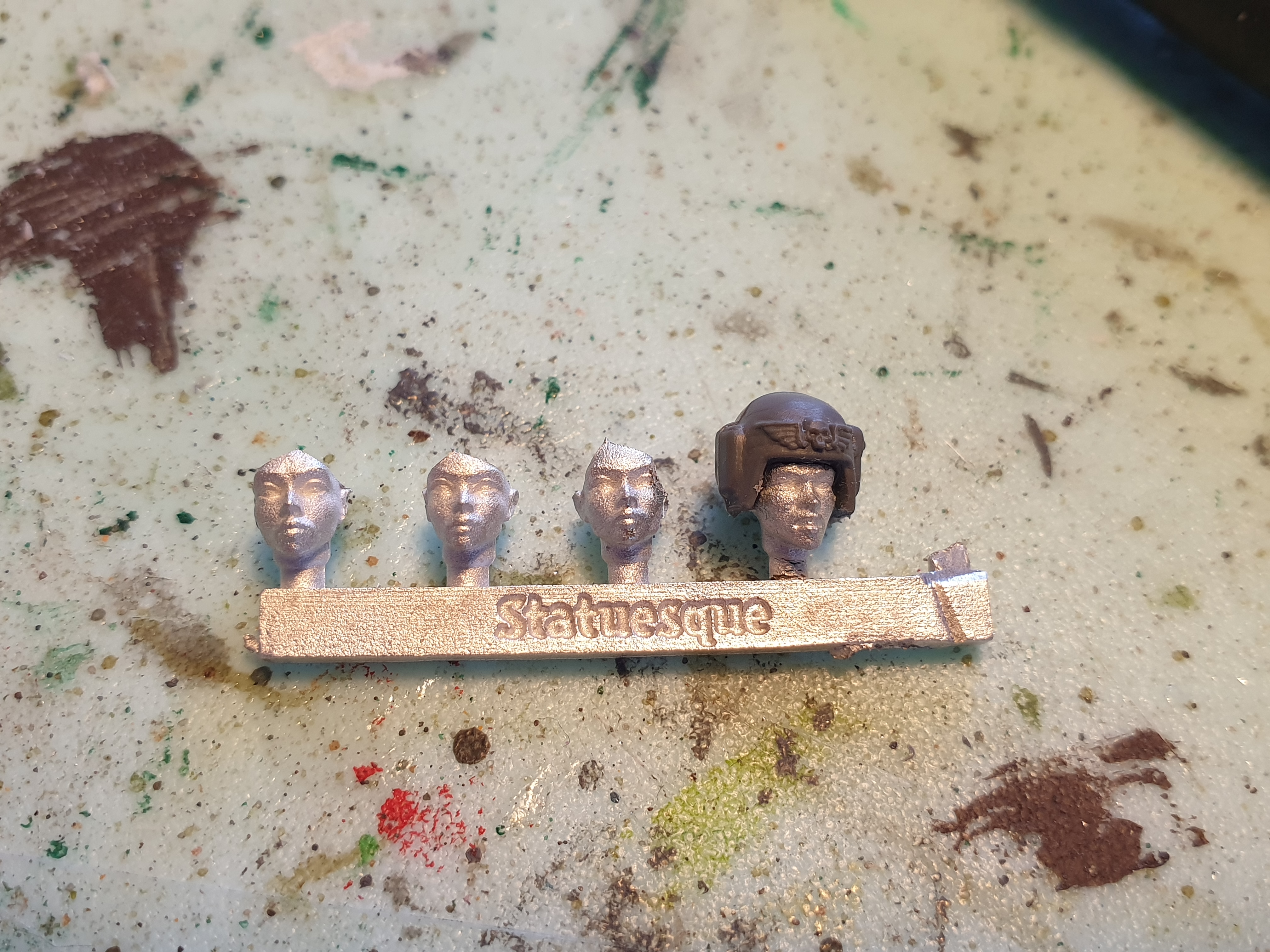 I clip of the top of the heads. File the top and ears to make the helmet fit. Just above the eyebrows seem good. I often have to remove a bit of the back of the head as well.
Then glue the helmet on. Use green stuff if something need to be filled. 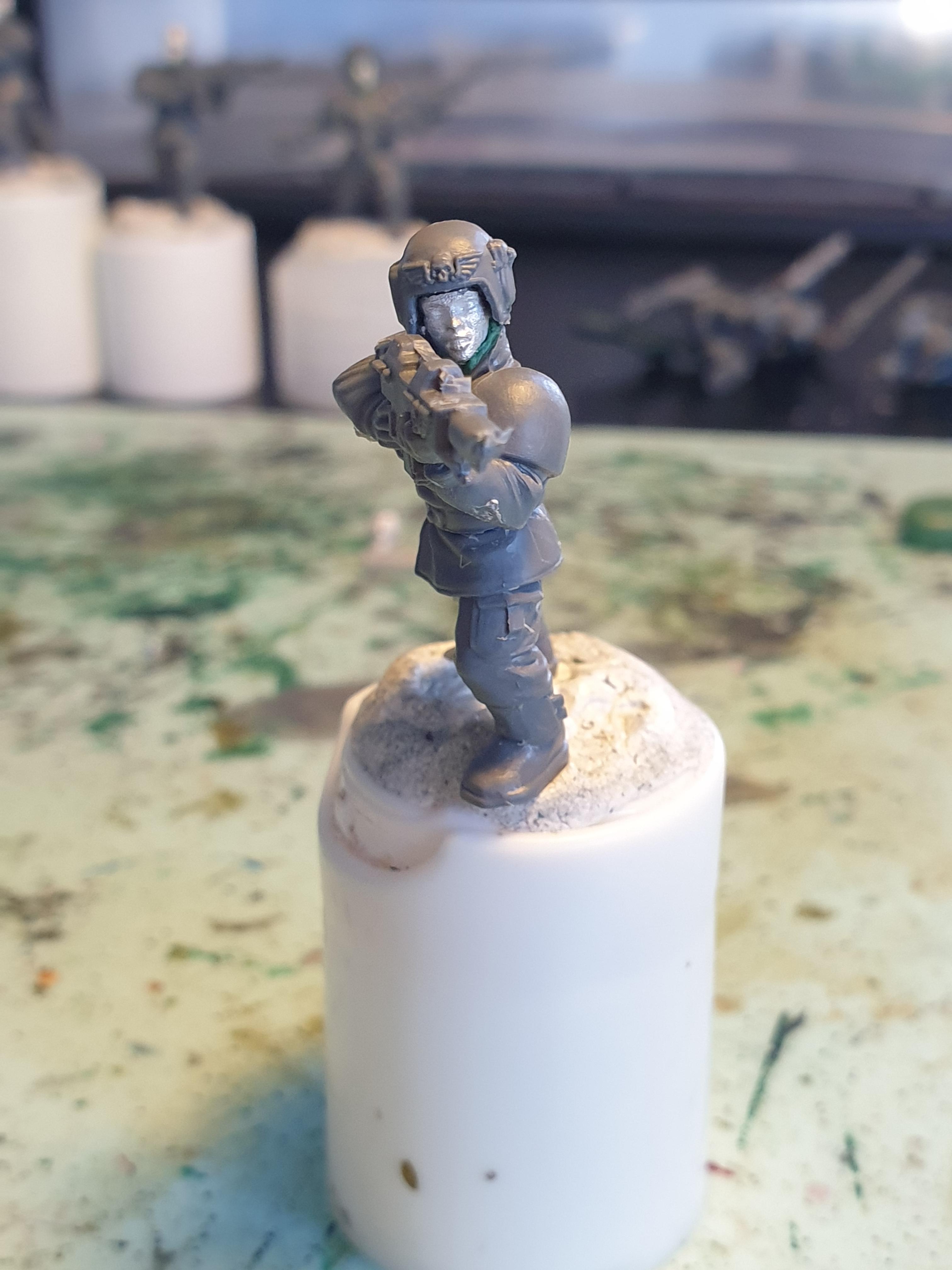 Finally use green stuff at the neck to fit the head. Remove excess and let the rest dry a bit before smoothing out. 4 with helm and 3 without done. The last three will have to wait till tomorrow.

The ten guardswomen were then spread to all three squads I'd previously painted. I removed 6 guardsmen from their bases and put women on amas made ten new bases for fourth squad with four of the guardswomen with Sergeant and Melta gun. 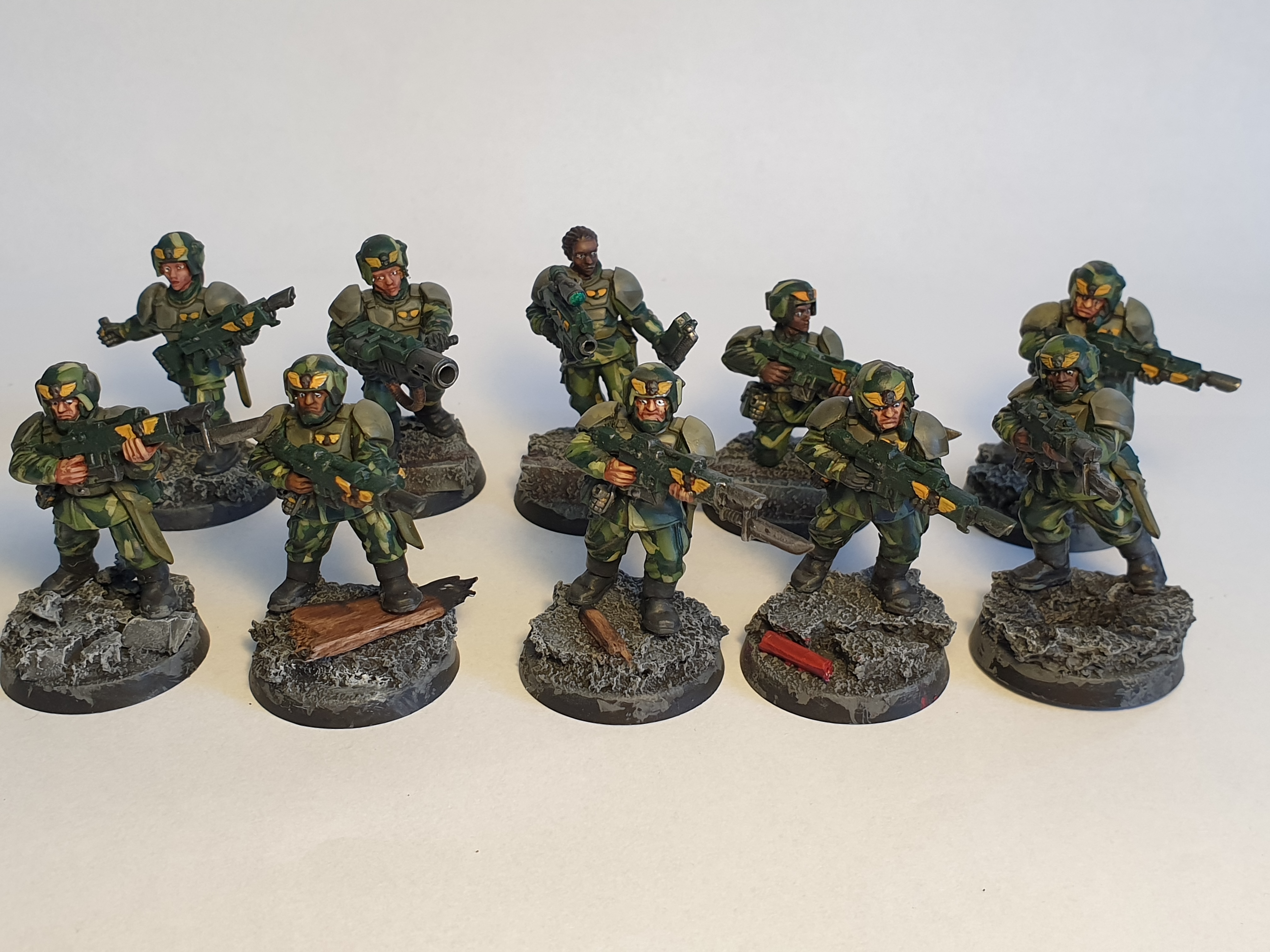 I also repainted all markings on my infantry so everybody have yellow and black markings. Future veterans will have red and white.

Good job on the guardswomen.

Following up my female guardsquad I felt like it was time painting my birthday gift from my wife: Commissar Severina Raine. 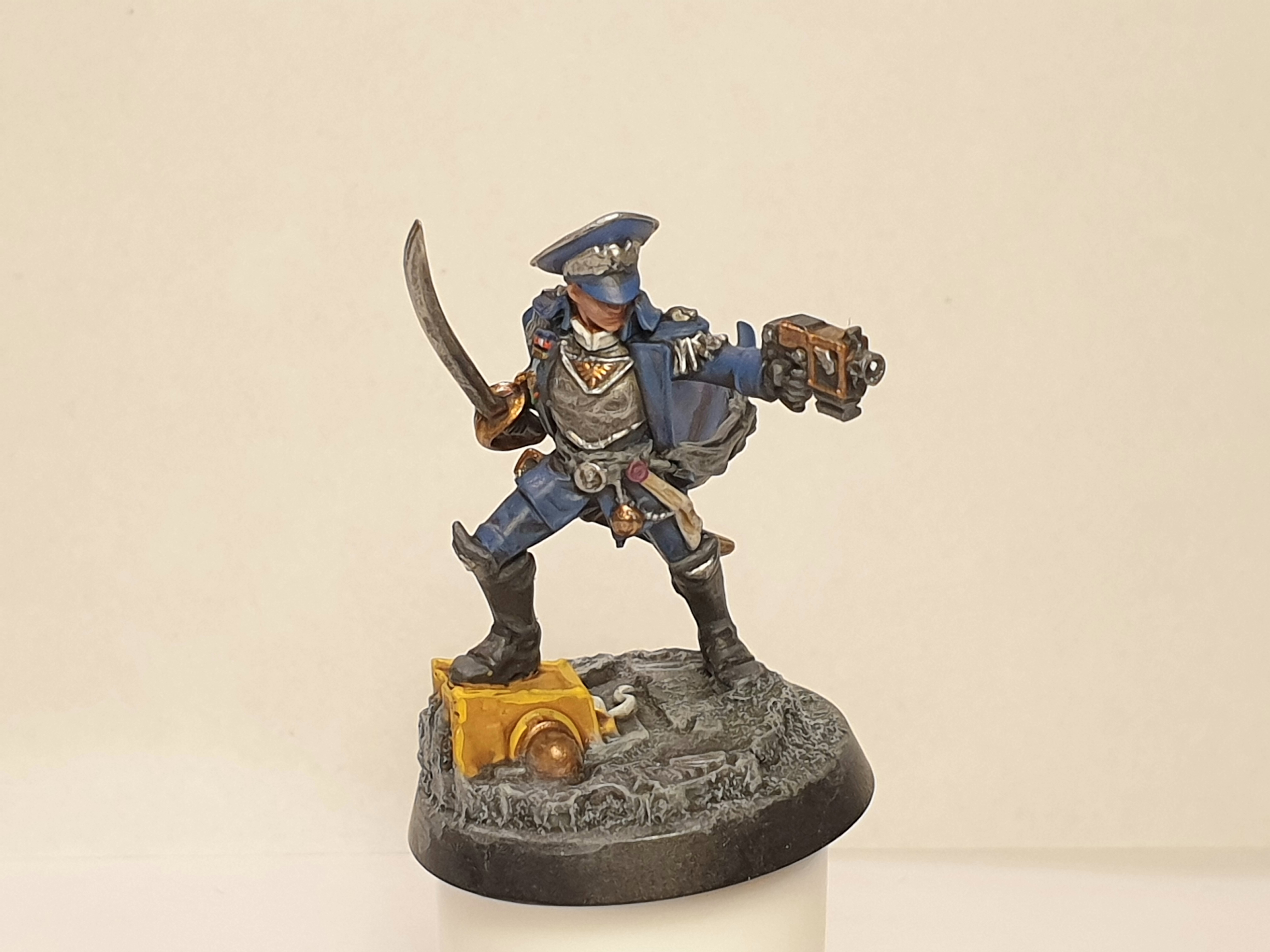 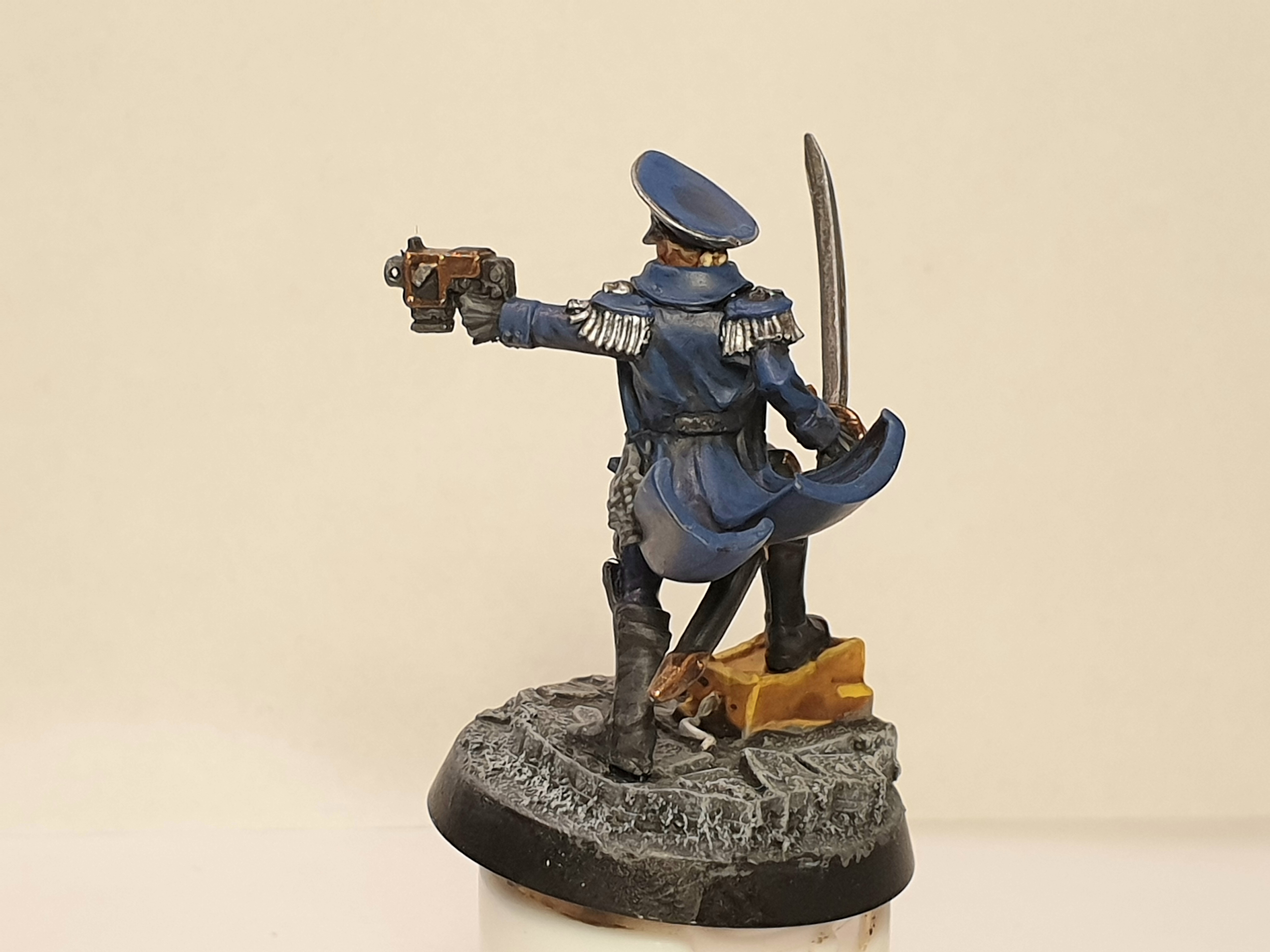 Fun painting, and the swedish M/87 dress uniform blue fit nicely although I made it a bit brighter blue than the real uniform.

out of all the finecast/resin models... I love Severina Raine the most.. You did a pretty good job on her bruv

Good job on Severina Raine. The fact she lacks the black coat and red sash used to ID commissars in Black Library novels, however, will cause confusion. It probably makes more sense to state Raine is a field grade officer, i.e., she has the rank of major, lieutenant colonel, or colonel. (I thought of suggesting she's a lady general who received rejuvenat treatments to restore her youth; but a general so treasured would surely have medals covering her entire breastplate, like scales on a dragon.)

I will admit that I didn't know the commissars uniform was set in colours. I thought it was like the troopers, different planet/regiments have different colours.
Black coat is acctually not a problem for the theme because our raincoats to the M/87 are black. I even thought of doing it black from the start since our jacket isn't that long.
Red sash is more of a problem, I painted it as our scarf that is grey.
Will think about it but the swedish theme is important to me. Besides I don't see myself going to many tournaments.

In short, a Swedish regiment's commissar will not be Swedish herself.