I'm taking part in a pretty laid back Tale of X Gamers with a few friends.

The only stipulation is that we need to have a 40k force of 1500 points by the end of the year.

I toyed with a few different forces, but for now I've settled on Blood Angels. Specifically Primaris Blood Angels.

Like many gamers I enjoy collecting models but struggle to paint even a fraction of them. I'm hoping I can change that with the advent of 9th edition.

I think the key to achieving this is a change of mindset. Specifically, I'm going to try speed painting. What this means to me is that I'm focusing on getting my models "good enough". They may not be my best work, but I want to achieve a consistent looking, painted force which I can be proud to put on the table.

So far I've managed to paint sixteen models to tabletop standard over the course of a week off work. The plan is to add some transfers for squad/company markings and potentially a highlight or two, but this is the overall standard I'm currently aiming for. 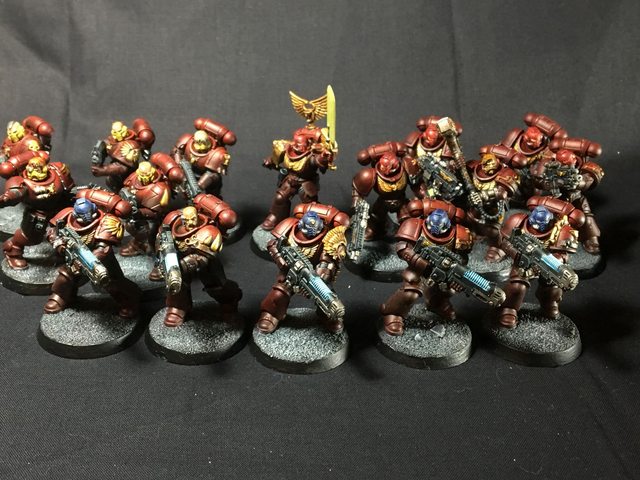 This force consists of a converted Lieutenant (who I now realise should be on a 40mm base), five Intercessors, five Hellblasters and five Reivers.

Here are some close up shots. 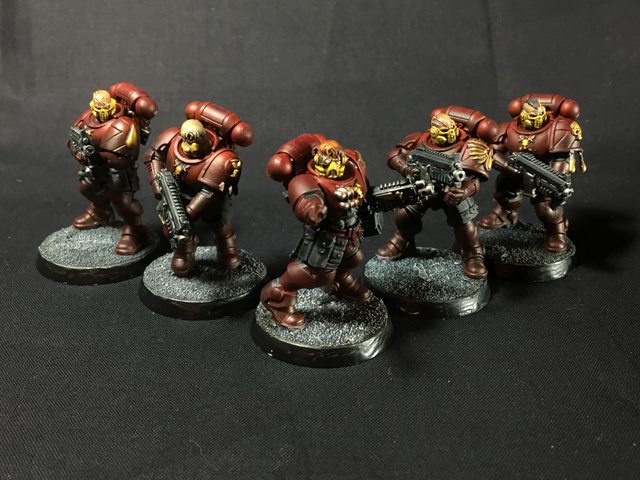 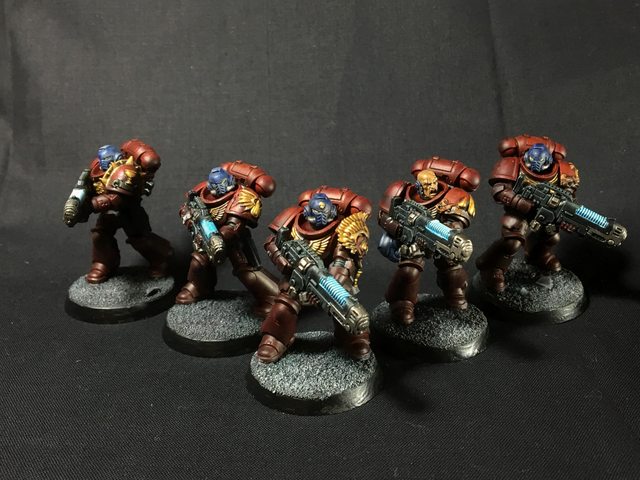 This accounts for roughly a third of the work I need to do by Year's End, so I'm optimistic that I can get this all painted in time.

I've got an email that my copy of Indomitus should be arriving tomorrow, so I've got that to look forward to over the weekend.

I like them. I think they look great and when they are displayed as a whole army on the battlefield they will be a sight to behold.

I am also neither the best nor the most patient painter and I work full-time, so a painted complete army is also that I am right now also attempting.

I think the motto needs to be "get it out or get it perfect".

Good luck on your journey!

I think you’re right with your motto. One other thing I’ve found is that you need to genuinely make the effort to *make* time for painting. If you are anything like me, there is always something else you could be doing, whether it’s work stuff, family stuff or good old fashioned, boring adult stuff. I’ve made the decision to pretty much go cold turkey on console gaming and try to avoid binge watching shows to claim back a few hours. It’s so easy to lose a few hours to surfing the internet in any given day.

Knowing that I have limited time has influenced my paint choices. The vast majority of the model is done with Contrast paints, which are a significant time saver. So was the decision to do all detailing in the same colour (gold). I was aiming for a style similar to the Angels of Death animation, so dark, brooding and a bit stylised.

Thanks for taking the time to comment. It’s much appreciated.

Your Marines are well-painted and detailed.

Thanks for the kind words Bjorn.

I was pretty chuffed to get this a day early. 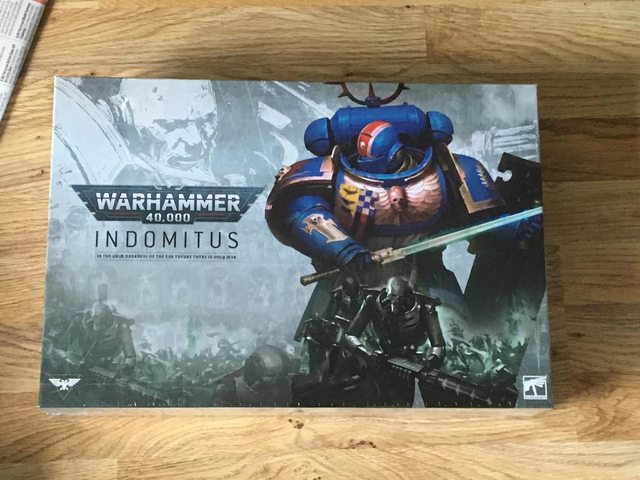 I thought I'd have a go with a quick conversion on the Chaplain. 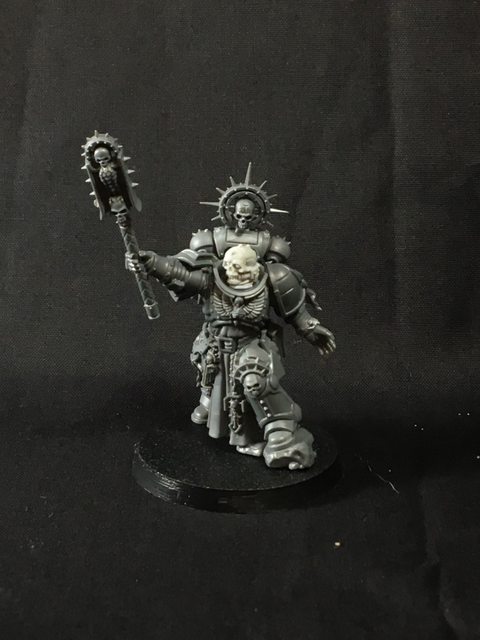 Pretty much entirely pushfit and blutac at this point, but I don't think I'll really change it at this point. 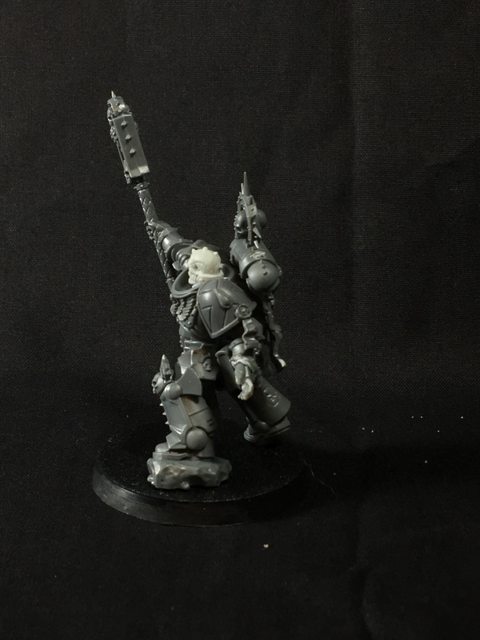 I thought I'd go with the Death Company Saltire for his shoulderpad in the hopes that he gets to lead some Death Company Assault Intercessors into battle.

I'm looking forward to using him in my Crusade Roster when getting games in is an option again.

I really like the Chaplain, is that the old finecast Blood Angels chaplain head?

Well, I cannot not comment a Blood Angel army

That's a very nice TT standard you're producing!
I cannot bring myself to such quick painting especially since I only paint with brushes. Indomitus scares me in this regard

Thanks for the kind words folks.

Doghouse, it came in a bits job lot, but I believe it’s the Legion of the Damned Sgt head.

Majkhel, having tried speed painting, I’d honestly recommend giving it a go. Perhaps try it on a model you’re not particularly precious about and see if you like the results. The nice thing is that once you’ve got your base colours and shades down, you can always come back at a later date and do edge highlights to your heart’s content. All of these models were painted entirely with brushes. I can put together a tutorial if people are interested?

I've worked out a rough 1000 point Roster to have something to aim for in the short term.

This is essentially what I have already painted plus some of the contents of Indomitus. Like a few others, I'm planning to use some of the Assault Intercessor bodies to make more dynamically posed Intercessors.

Since updates with photos are better than those without, here is a quick shot of my two HQ choices. I just realised that they are essentially mirror poses of one another. 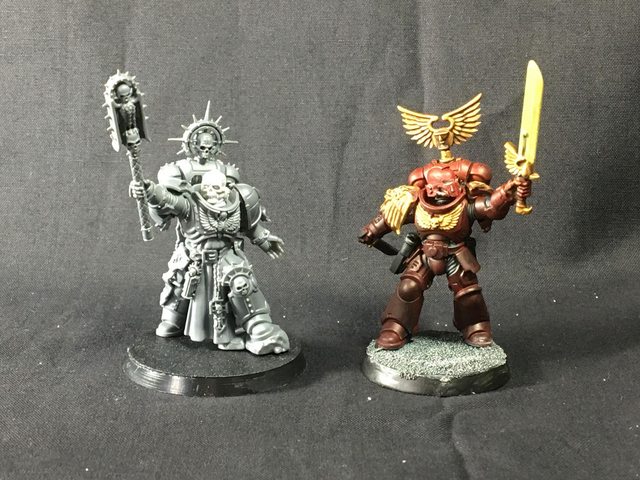 Brilliant stuff! To say you are "speed painting" these guys they look great, and I really love the helmet and handswap on the chaplain, I prefer it to the original. Not a fan of those massive pistols all the Indomitus marines have personally.

Thanks Jay. I agree with you on the massive pistol for the chaplain. I much prefer the model without it.

All of the models have at least one of the shoulder pads replaced with Blood Angel Iconography. It's a reasonably simple conversion which just requires using clippers to trim away the old pad. You don't need to be super neat as the new pad will cover most of the mess.

This first model makes use of the Chaplain's bare head as I feel it's too good a shouty head not to use on Death Company. The pointy arm is from the Easy Build Intercessors. 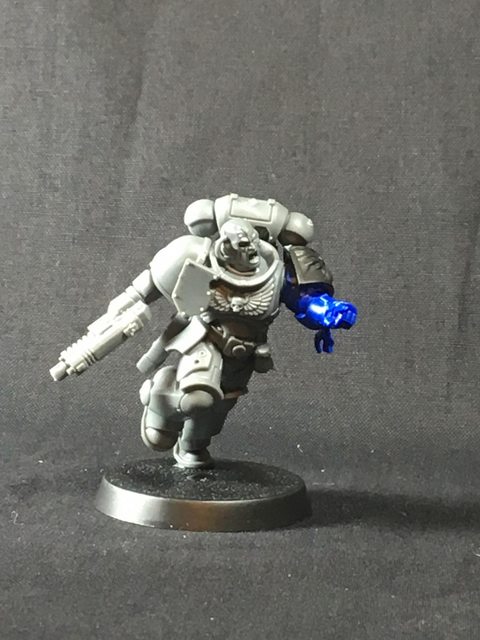 This next model was just a shoulderpad swap. The head is left off for painting as I paint all of the heads separately. I find it's easiest to leave them separate and paint them on the sprue, so you don't get silver paint everywhere when you paint the undersuit. 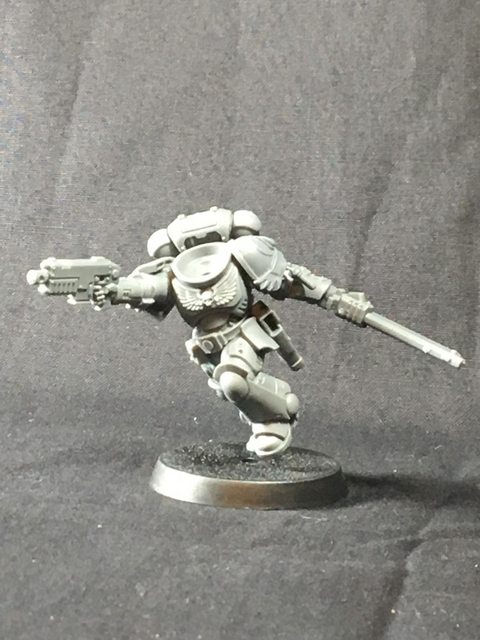 A similar story with this next marine. 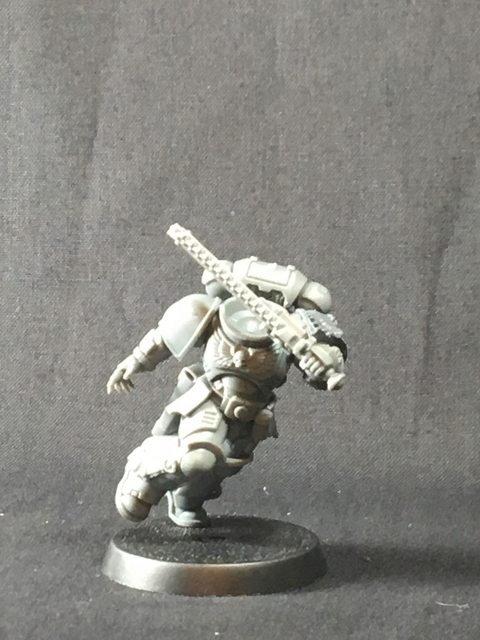 This model was a slightly more involved conversion as I used one of the Easy Build Reiver pistols, which needed trimmed down to take a standard shoulder pad. 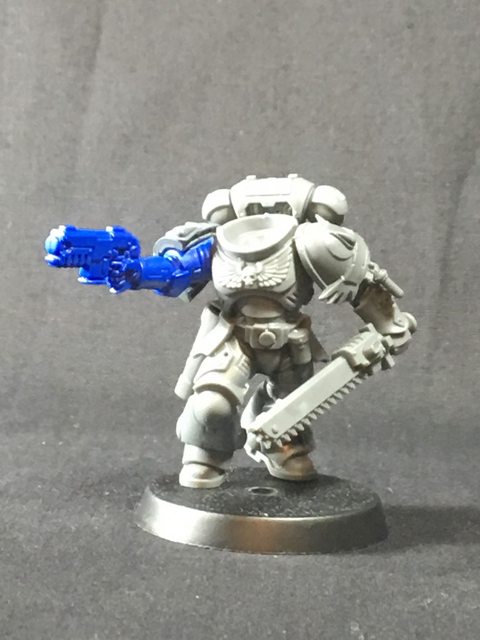 Finally, this model was the most involved conversion. I wanted a model that shows the superhuman endurance and ferocity of the Death Company. The right arm is from the Intercessor kit. I cut the hand off at the wrist, drilled into the stump with a 1mm and 2mm drill bit, inserted some paperclip and paper into the gap and then used clippers to add more battle damage to the arm. I drilled a few bullet holes in the torso. 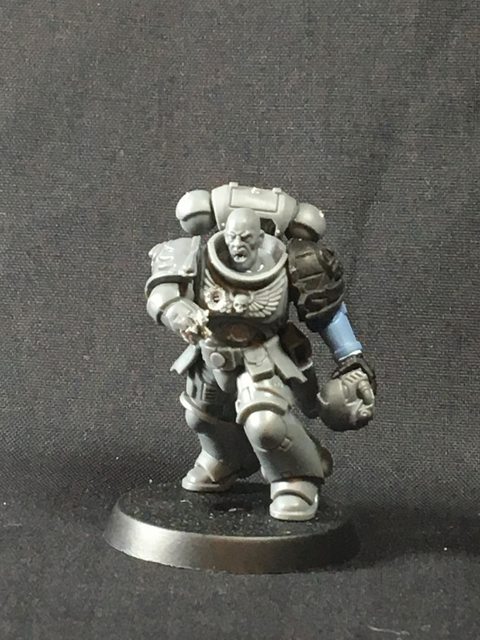 The arm holding the helmet is from the Reivers kit. The helmet had a hole drilled into the bottom and the hand is from the Death Company kit. I'm not 100% on the head, but suspect it's an Age of Sigmar Vampire head of some type. Once he's painted, the plan is to add some blood effects to the wounds and to the helmet to suggest that he's been using it as a weapon, since he appears to have lost his wargear. 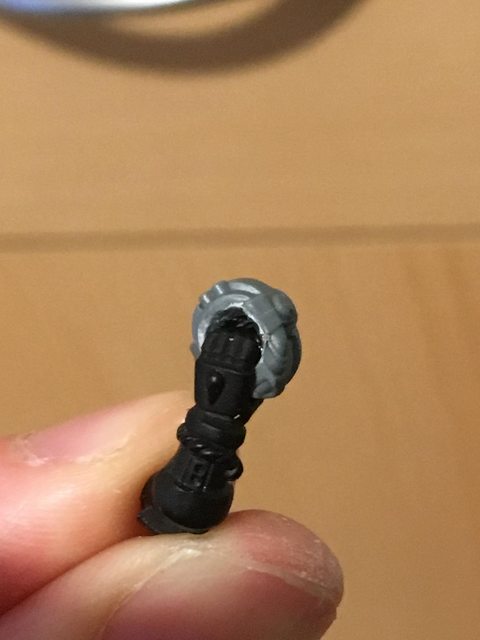 The next step is to clean the moldlines, base and undercoat them. I think I'll do a batch of black power armour, so that will be these five, the Chaplain and the Executioner.

Your models are well-posed. I hope to see them completed soon.

Thanks for the kind words Bjorn. No paint yet I'm afraid.

I did however put this guy together. 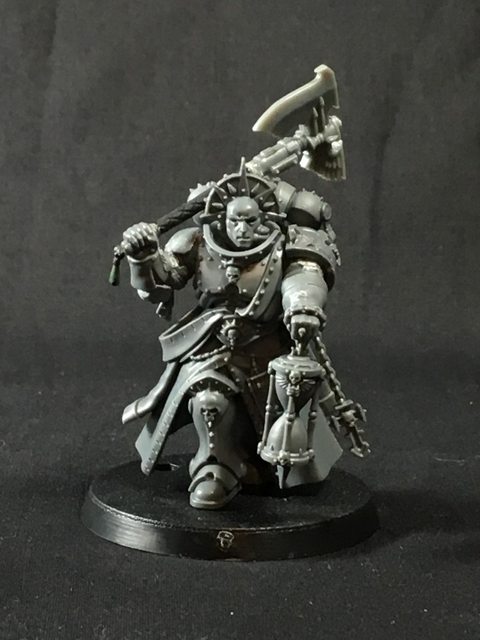 The axe was a bit of a hack job with the blade from Sanguinary Guard, haft from the Grey Knight kit and the blood drop is off a Death Company bolter. 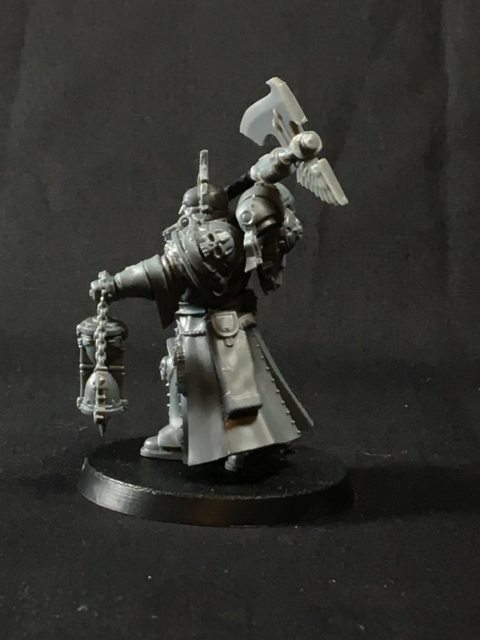 One piece of feedback that I got was that I should replace the current head with a skull helmet similar to my Chaplain. I thought I'd see what you folks think.

Nice take on the Judiciar! For me the skull helmet befits a chaplain (and Reivers but the're a weird bunch - apparently they think their skull helmets scare people

) so this one is as good as any. A mask works well with the 'vows of silence' thing.
I like the axe and would even consider a longer handle below the hand. Still gives off a nice feel of weight.

For mine, I think I would replace the hourglass with something else..., but that's me

EDIT: What are your plans for the second pauldron?

I’d originally left the sword haft at the bottom of the axe to extend the length, but the difference in styles made it pretty obvious that they were two separate pieces. In terms of the other shoulder pad, the model only comes with one.

I finally managed to carve out enough time to get my Death Company to tabletop standard. 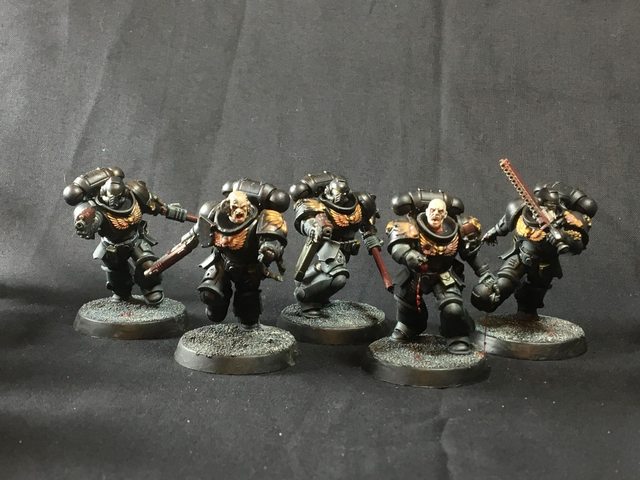 I think this guy is my favourite of the squad. 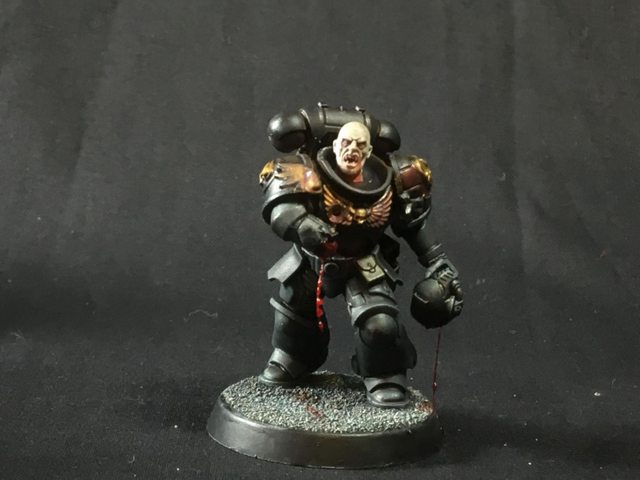 It was my first time attempting blood effects like this and I'm pretty happy with how it turned out.

Next thing on the painting table is likely to be some more Intercessors and the Chaplain, who I'm still preparing for primer.

I've also been working on 500 points of Nurgle aligned Word Bearers, so they might make an appearance here at some point too.

Gotta ask where are you sourcing the bare heads from?

Reiver heads with hair are from Sanguinary Guard kit, bearded Intercessor head is from Space Wolves Blood Claw kit, bionic Death Company head is saved from heheading the Indomitus Chaplain and the vampiric head is from the Age of Sigmar Zombie Dragon kit (from memory). Any other heads are from either the Reiver or Intercessor kits.

Really nice work brother 👍. They may be speed painted, but they're neatly done and look excellent. I really like the armless (but definitely not harmless 😀) death company marine too.

Also tagged with one or more of these keywords: Dallo, Blood Angels, Speed painting