I don't know about the rest of you, but I've found that one of the benefits of lockdown and working from home has been the [ chance to / lack of excuses not to / opportunity to ] finally get around to many of those little side projects and distractions I've thought about.  Admittedly, work has been pretty busy so I've been focused on small single-figure projects, rather than some of the vast armies I've seen others create. This Inquisitor kitbash is one such project. I am a huge fan of the Ciaphas Cain series, and this initially began as my attempt at creating a miniature of Inquisitor Amberley Vail. It was also a convenient excuse to try my hand at painting colours and techniques I don't normally do with my Iron Hands forces.

However, due to a lack of official character art, my limited scultping talent, and a upcoming Crusade campaign, she became my own Inquisitor, Amalyn Trevelian. An inquisitor who tries to go about her duty discretely, rather than all-guns-blazing. So yeah, basically an unoriginal copy-paste clone

"We don't all charge about like a grox in a china emporium. Some of us think it best that the enemies of mankind don't know that we're looking for them..." 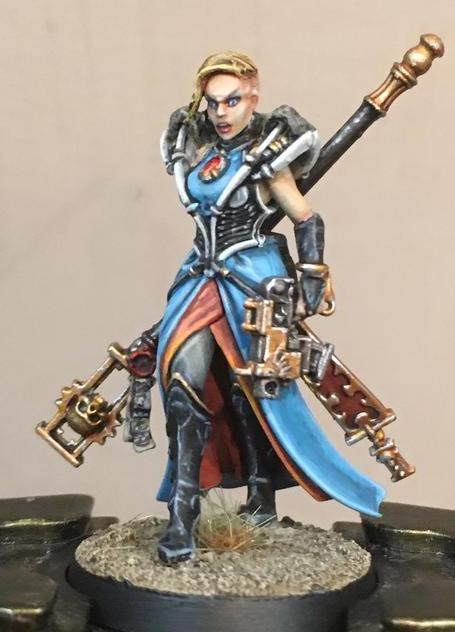 My starting point was the female GSC Magus model - ever since it was released I'd thought it had the underpinnings of an excellent Inquisitor model. I initially thought about replacing the head altogether, but couldn't find any that I liked. So, out came the scalpel and fine sandpaper, and after some very careful surgery I'd managed to get the forehead looking a little less 'genestealer-y'. Sculpting the hair was a bit of an issue - Amberley's hair is described many times, but with no official art I had no idea what to go for. It was fairly academic in the end, as I can't sculpt hair  - I was left with this.... 'look'. Not terrible, but definitely not Vail. With my group starting a narrative campaign it became easy to quickly change her from Amberley to Amalyn.

Let's just call it a popular hair style amongst the nobility of the planet she's infiltrating... 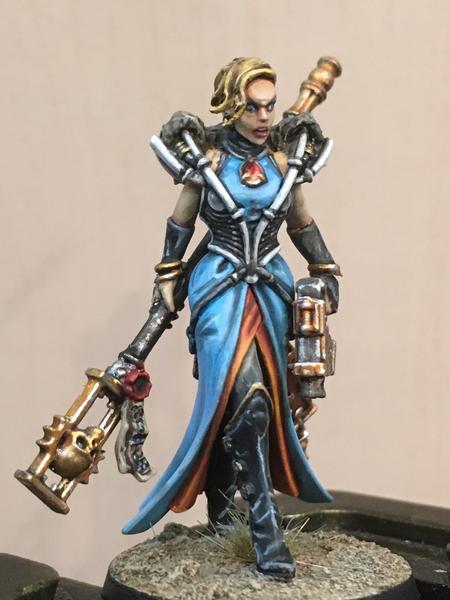 The GSC neck/shoulder armour was the next to go, replaced with my attempt at painting a fur stole. Again, not the greatest, but given my GS skills, it'll do. It does look better in person - for some reason the photos make it look far worse than it is.

Weapon choice I went with a bolt pistol (as per Amberley) and the big staff (icon taken from the new plastic Canoness model). No idea how useful either will be in a campaign crawling with Orks, Tau and Death Guard, but we'll see. 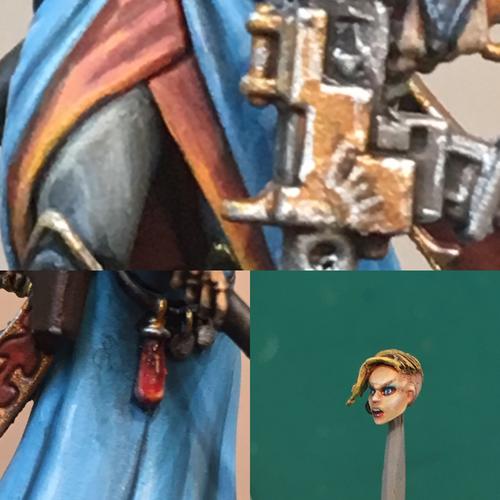 When it came to painting her, I decided to stick with the blue of Amerley Vail. Partly because I'd started painting the body before I sculpted the head, and partly because I don't normally paint such bright colours and fancied a challenge. The orange seemed like a nice spot colour to contrast with the blue and grey. For the head, I followed Darren Latham's excellent video. I'm far from perfect, but I honesty believe his tutorials have massively improved my painting. 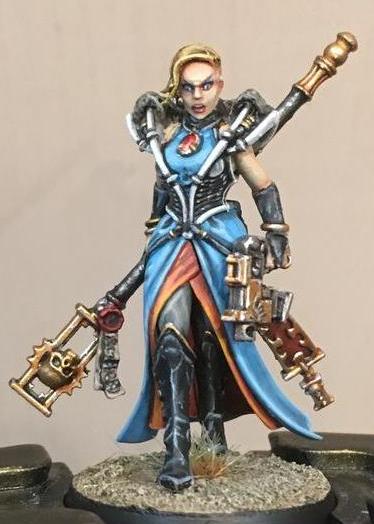 Anyway, that's enough from me. Cheers for looking!

Beautiful model, especially the face. The eyes look a bit like she's on coke though are looking great! She seems to be very focused

Beautiful model, especially the face. The eyes look a bit like she's on coke though are looking great! She seems to be very focused

Thank you, much appreciated!

I completely agree with you about the eyes - I just couldn't get them 'right'. After 3 attempts I decided "sod it" and left them like this, as they weren't getting any better. Let's say she's just seen some serious heresy

Excellent work on the Lady Inquisitor.

I don't think its the eyes themselves - they seem to be really well painted.  Rather, its the shape of her forehead that she inherited from her base mini and the corresponding line of her eyebrows - people don't naturally have facial features that look like an angry face:

I think your paint job does as well as is possible - she doesn't look like a genestealer cultist and her eyes look natural.  Just say she has painted her eyebrows for dramatic effect and to emphasize her eyes and call it a day.

As for the hair, while it might not be the hairstyle you were going for, I think its very effective - it looks very natural and fits the model as a whole very well.

She looks great! Like she's proudly striding across a field of corpses with a "you're next" *look of intense focus*

Also tagged with one or more of these keywords: inquisitoramberley vail, ordo xenos, inquisition