27 replies to this topic

A BRIEF NOTE ON MANNERISM AND ECCENTRICITIES

As stated, the Wardens are believed to have been founded between M40 and M41, placing them between the 24th Founding and the Ultima Founding – with evidence pointing towards the latter. As stated, upon creation the chapter was understood to initially operate much like a Codex Adherent chapter. Indeed, the earliest recorded sighting of the chapter, 997.M41, makes no mention of any eccentric organisational structure or quirks. Quite how or why the chapter ended up so divergent, and in such a short space of time is an interesting point of speculation.
The chapter are known to have participated, admittedly briefly, in the Nephilim Sector during the dawn of M42, policing the borders of the Badab Sector in the wake of the Tyrant’s destruction at the close of M41. The Wardens were amongst many chapters participating in this task, including the Star Phantoms, Sons of Medusa and the remnants of the Fire Angels.
Fragmentary scraps of data suggest that during this period the Steel Wardens may have sustained heavy casualties in an ill-fated raid on a corsair based of operations, however, attempts to confirm this have been fraught with difficulty. If true, the chapter has certainly recovered well, given that they currently at around 75% strength. Records are scarce, and this is one topic that the chapter seem unwilling to discuss – in stark contrast with most other topics. A log within the Ordos records of the Ordo Nephilium Conclave has been flagged as containing pertinent information, however at the time of writing that log has been indefinitely suppressed.
Anecdotally, the brethren of the chapter refute claims of heavy casualties, with the senior officers and veterans being the most vocal. I was firmly rebuffed when I asked about aid given by the Sons of Medusa, given that they were known to be operating within the system at the same time, however I am willing to put the Wardens' animated responses down to typical Astartes pride. What is known, is that the chapter’s divergence is confirmed to exist after the Nephilim campaign, and that it is at this point that the chapter’s fixation with augmetic enhancement became more readily apparent (see attached comments regarding veterans).
There are some within the Ordo that suggest that this series of events in the chapter’s existence is more than coincidence, especially given the time frame. Certainly, the chapter is surrounded by some… imaginative rumours, pertaining to the diverent chapter structure. The existence of a clan structure, unified by a chapter armoury, is a point that many find more than coincidental. Of course, the very idea that, having stumbled upon the crippled Wardens chapter, that various members of the Sons of Medusa have taken on the identities of the deceased senior leadership of the nascent Steel Wardens, and re-forged the chapter into something more fitting of scions of Manus is, frankly, preposterous, and need not waste our time with further examination.
That said, quite why the chapter is known to refer to itself as the 'Inheritors of Moirae', is perhaps wor-[ERROR_DATA_CORRUPTION] [SPOOL MISSING]
[BACKUP DATA SPOOL ERROR]
[RE-LOAD: Y / N]
------------------------------
Enough of the lore expansions / libellous Inquisitorial rumours for now. Hobby progress!
Work on the replacement / spare captain continues. He needs a fair amount of cleaning up (some of those highlights are a mess), but this is the stage so far, pre-detail work.
The white helmet is a mixture of lore (TBC) and practice for the veterans - I wasn't sure how well a white helmet would work with grey armour, but I think it looks alright here. Undecided on the choice of green or red for the helmet lenses. 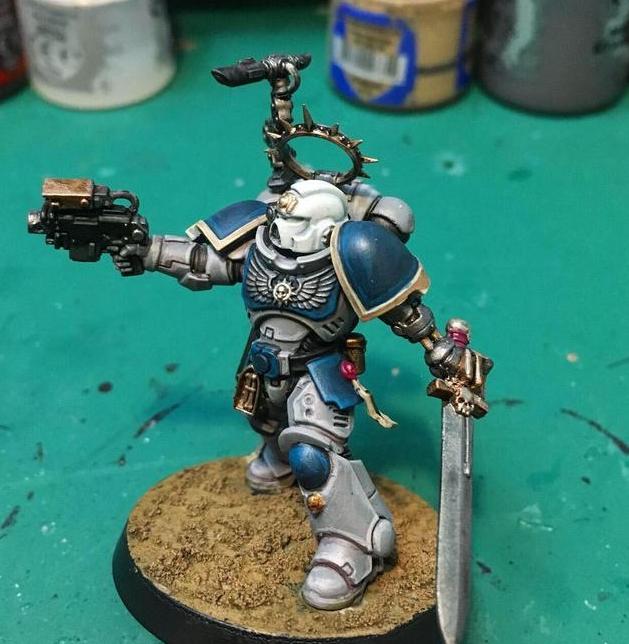 Absolutely no clue how I'll paint the sword - I'm thinking a red / flame design.
I also did a bit more work on the dreadnought - I'm still trying to work out what colours will go where. I know the ETB kits get a lot of bad press, but honestly I'm a big fan of the ETB Dread. 15 minutes to clean up and build, compared to the 3 hours it took me to clean up and build my Iron Hands redemptor. 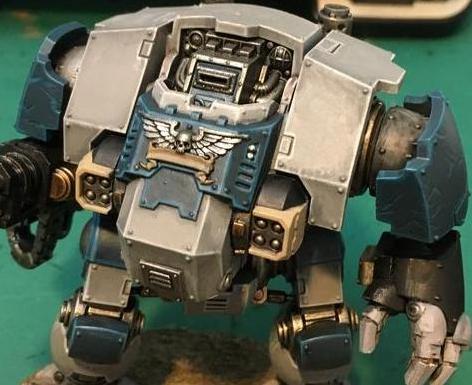 For reasons that I'm sure made sense at the time, I decided to try and get a fade / shade effect on the grey by hand, rather than with an airbrush which would have made considerably more sense. And yes, I may have gone a little over the top with the scratches painted onto the shoulders...

Anyway, enough of my rambling for now. Thanks for looking!

I've been lucky this weekend and managed to get a fair bit of hobby-work done - admittedly most of it terrain and objectives.

The Knight Order are slowly coming together - I'm trying to bring in a bit more black and green into them. 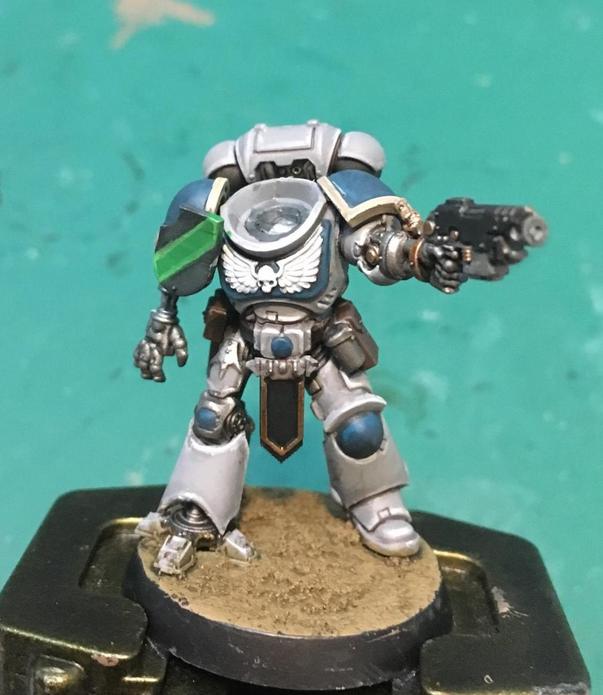 This is very much new terrain (sorry) for me, as usually I've either improvised or just used the same old terrain I've had for the past 15 years. Yes, it's amazing how many of my battles in the 31st millennium, 41st millennium and my advenutures in The World That Was have taken place in what looks suspiciously like a 19th-20th century western European town or 'Olde-Worlde' taverns...

Let's start with the most... unusual. I made a train. Yes, I saw Duncan's excellent tutorial video the other month showing how to convert a Magnavent kit into a locomotive, I decided that it looked like fun and that I'd give it a go. If all else fails, at least the battlefields of the Mylens System will be different.

I made a few changes to the design of mine, opting for 4 wheels rather than 6, adding a rudimentary cab roof, additional cables and wires, and so on. 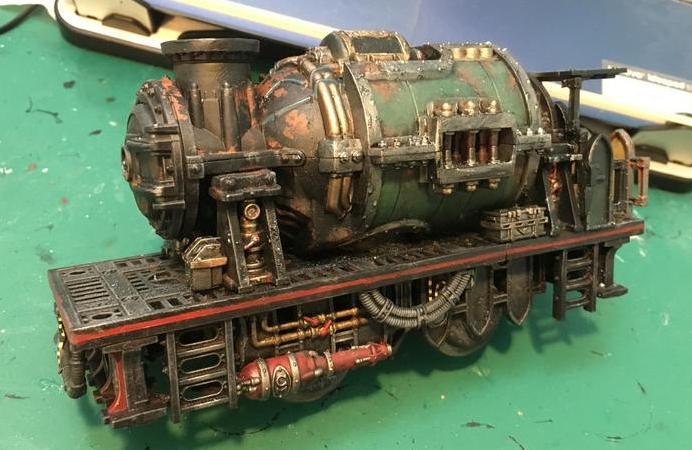 Painting this was fun. I studied a lot of photographs of the little engines used by the National Coal Board, especially in the 1970s-1980s, as I wanted this to look similar: A well-worn machine which has been patched up countless times. The paint is faded, caked in grime and soot, and is flaking off - the smokebox door in particular often seems to suffer from the paint blistering away due to heat, promptly leading to rust starting to form in patches.

It's by no means neat, but I guess it isn't supposed to be. 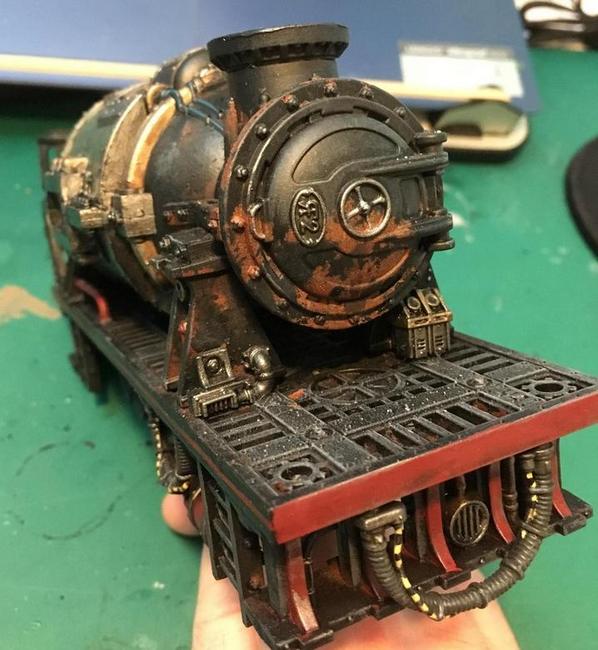 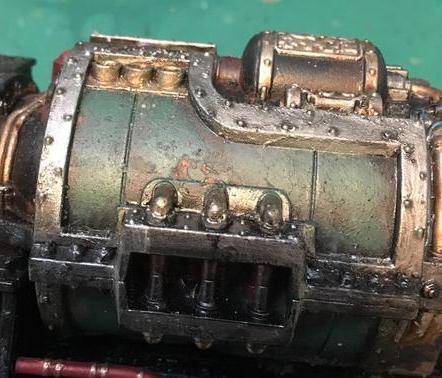 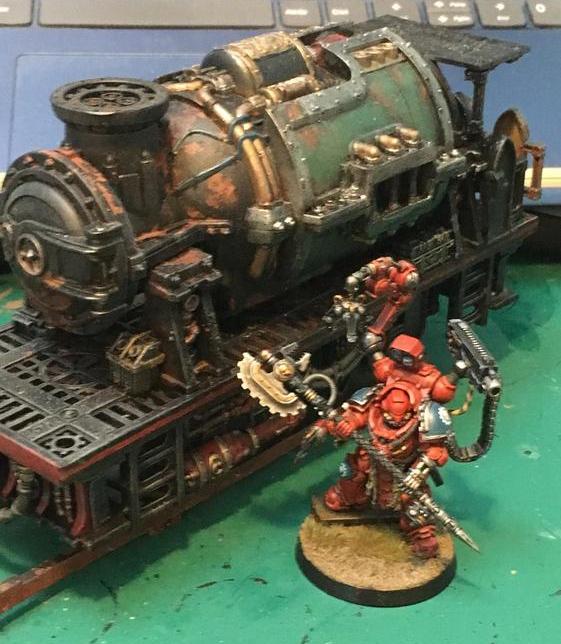 Next up, another vehicle. This sort of blurs the lines between Objective / Terrain / Unit, mostly as it's yet another orphaned project. This was my first attempt at weathing using the salt+water technique, and I must say I'm rather happy with it. It was also my first attempt at using Contrast Paints. 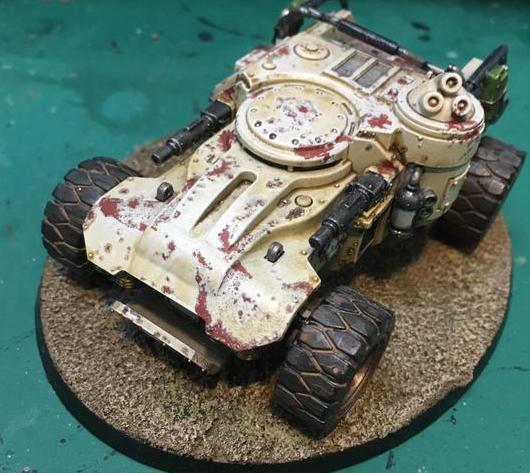 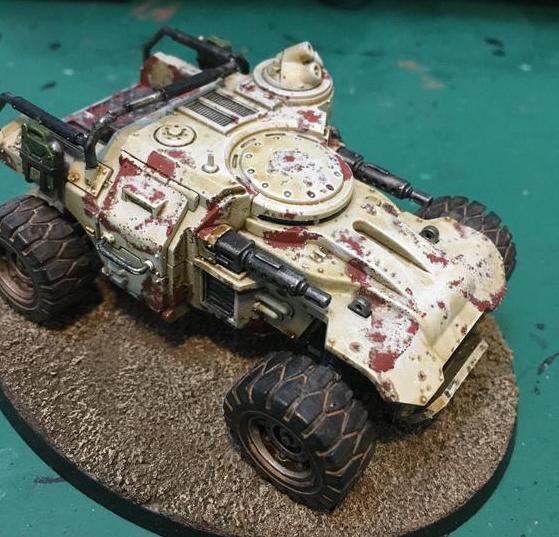 Yes, I did purchase a load of WH: Conquest magazines cheaply... 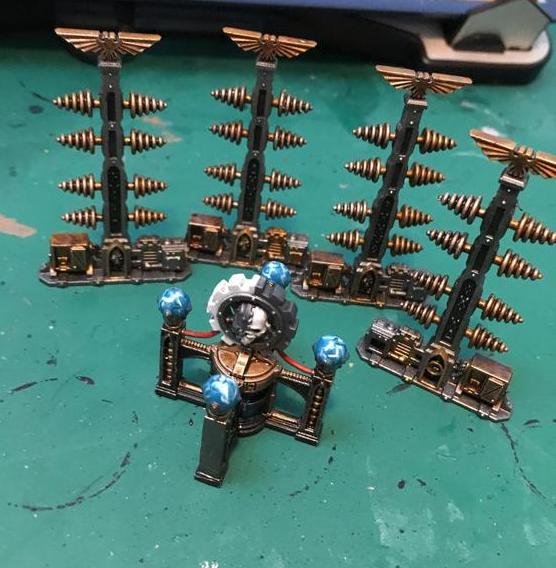 I'm very fond of the pylon models, if only because of the nostalgia they bring up from 4th Edition. If anyone has any suggestions for what I should do with these  - mount each of them on individual bases / mount them all on one large terrain piece - I'd be grateful.

Next up - the museum piece, the dentist's chair and the ammunition stockpile. All very fun little side projects.

The brass/bronze work has all been done with the new Necron paints. These are fast becoming my go-to metallics, as they are vastly superior to GW's previous brass and bronze paints. 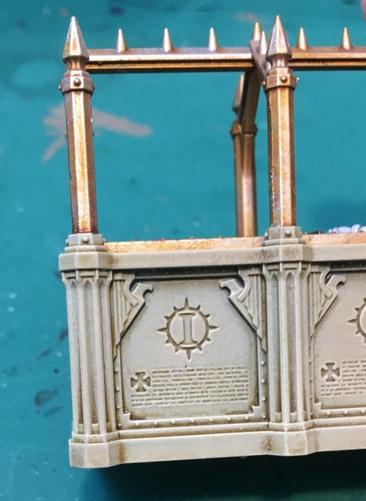 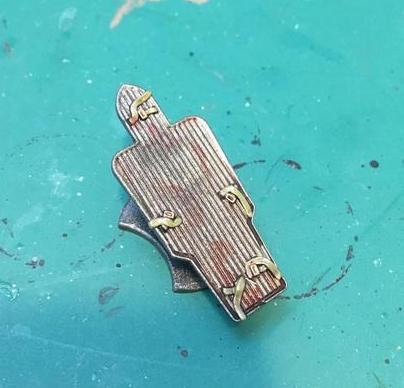 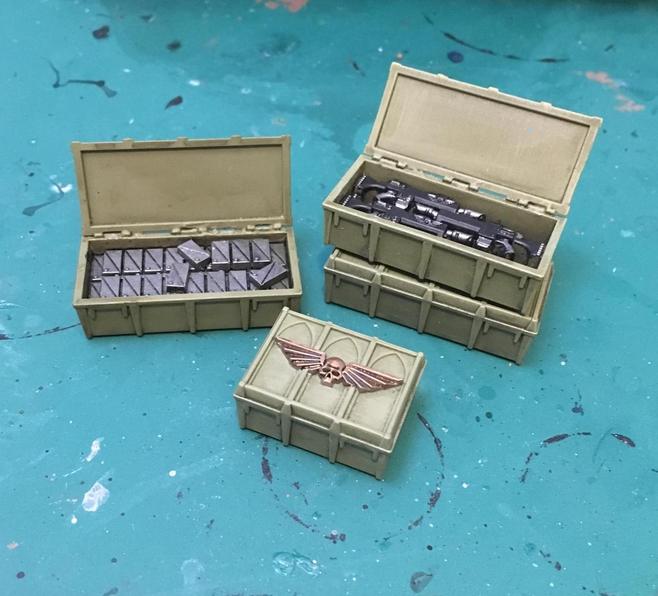 And finally - a real bitzbox monstrosity - a gun turret. I've yet to decide on how to paint it - as you can see it's just grey primer at the moment. Bizarrely fun to make, as aside from the turret and turret ring, the majority of it is scrap plasti-card. 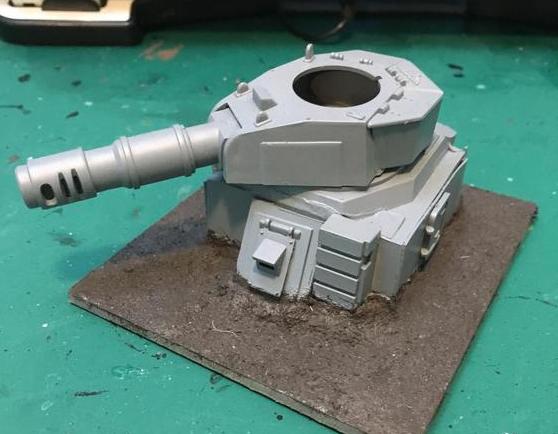 Fine work on the steam locomotive and the ATV.