Yeah, if there's one thing I've noticed with the Contrast paints, it's that they're all so different from each other. Black Templar seems to be one of the ones with far better coverage, whereas if you put Plaguebearer Flesh over another paint, it's barely noticeable other than giving a somewhat greasy sheen to the model. They're definitely not just inks/shades, as some like to claim.

Almost done. Decals and pigment on the base and I’m good with these for tabletop quality. 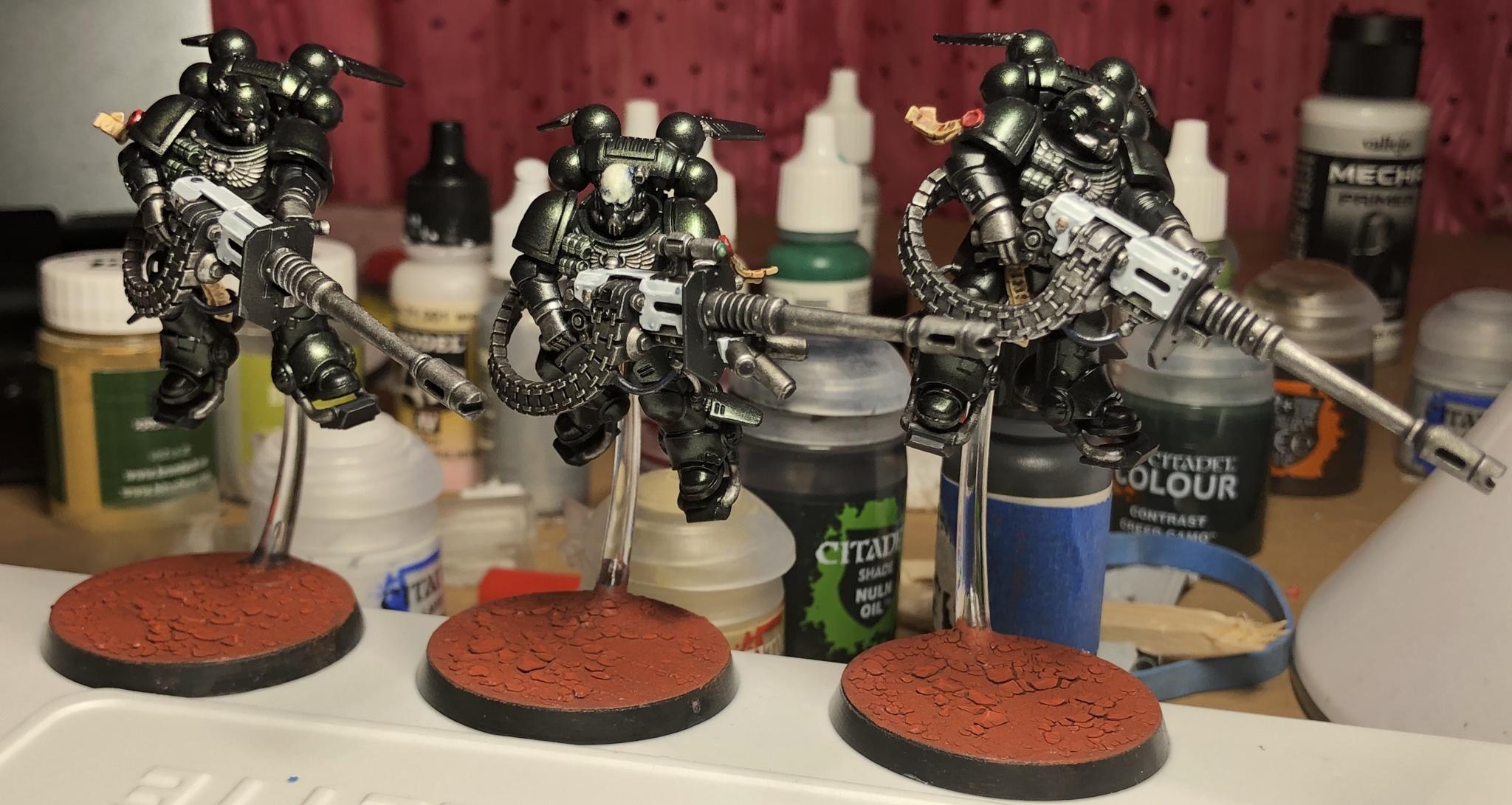 The colours work very well together, in particular the white weapon casing really pops so they're going to look great together on the table top as an army

Many thanks! I hope to hone my skills/refine the white highlights on the gun casings. With all the intercessors and such I'll be painting, I bet I'll improve after a few.

Your models are well-painted.

I too am going to try the vallejo black metal approach, I like thst it makes the IH immediately different from other black armoured chapters

Cool use of the color shift paint for a unique style paint scheme!

Thank you for the comments!

Decided to strip them all and start over. The metallic thing didn’t turn out the way I wanted it to, and I want them to be blacker than they are dark metallic.

Going to experiment a bit before painting them back up.

Sorry to hear it wasn't what you were aiming for.. but they looked awesome!

They looked really good but I’m sure you’ll come up with something even better.

I appreciate it, fellas. It wasn’t without conflict that I put ‘em in the stripping bath, but I have a vision in my head that may or may not be realized the second time around.

If one remains, what about putting a thinned layer of Black Templar contrast paint over what you've got now?

None remain, but the problem with doing that at the end is to dull the gloss effect and subsequently the color change as well.

Do you have any approximations for the colour you're after? Perhaps the Black Templar contrast paint may be of assistance?

Do you have any approximations for the colour you're after? Perhaps the Black Templar contrast paint may be of assistance?

The color-shifting paint has to be painted on top of a gloss coat to achieve the maximum effect, ideally with a black baseline beneath that. Painted on top of other paints, it has a drastically reduced color-shifting effect. At that point, I could just use green/violet sprayed in some fashion to achieve a similar look, i.e. there would be no point.

I have a bunch of random parts that I sprayed with black primer, I'm going to do some testing with those. The biggest issue is lack of time! Spending time with family is the priority, so I try staying up late/waking up early to work on other things, but a baby who doesn't sleep through the night or wakes up super early herself complicates that. Can't just leave the wife to do everything on her own while I'm home, so that's been the priority. I've been scrubbing a few models clean here and there, and sooner or later I'll have all my ETB intercessors and hellblasters from Dark Imperium ready to go. By then, I'll hopefully have worked on my test parts enough to have at least a general idea of how to proceed.

Black Templar contrast was a decent idea to subdue the metallic effect. If I wasn't using the color-shifting paint I think I'd stick with that sprayed over a metallic basecoat.

That is the problem with color shifting paint - they don’t lend themselves well to things like shading and highlights. They do look ok though .

That is the problem with color shifting paint - they don’t lend themselves well to things like shading and highlights. They do look ok though .

I feel like there is a workflow-related solution to it, but I just haven't had a chance to do the testing to figure it out yet. The hope with the metallic zenithal style was to achieve it, but I somehow failed that experiment pretty miserably.

It is good for things like doing metallic bases. Is can fun to go for new or esoteric technique.

Yeah, I agree. I feel like I’m close to passing the point where the amount of work isn’t worth the result. I just wanna have a relatively easy-to-paint and good looking scheme and play some games! New codex is around the corner.

I don’t know how good I am at painting but I will often spend hours on one Marine.

I can appreciate that level of detail. I’m sure I’d end up spending a couple of hours per mini regardless, as I batch paint everything.

I would reserve extra time/attention for characters/dreadnoughts or whatever details may call for it. I have a tendency to just not finish things if they can’t be perfect, so I really have to push myself to just be content. Obviously didn’t succeed with my prior efforts in this thread, but I feel like it was more a matter of not liking the outcome/scheme itself than fussing over lack of perfection.

I try to paint each Marine to character level. I remember when I was finishing my 13th Company I had to take a six month break from the hobby.

Haha yeah I can see how that could induce burnout!