82 replies to this topic

I don't know how I've missed this, but that is some crisp painting, good sir! Very nice work, and the colour of the Gal Vorbak red fits Flesh Tearers quite well!

Even though technically FT would be the worn-down, chipped armour stained with blood kind of guys

Anything else in the pipe?

I don't know how I've missed this, but that is some crisp painting, good sir! Very nice work, and the colour of the Gal Vorbak red fits Flesh Tearers quite well!

Even though technically FT would be the worn-down, chipped armour stained with blood kind of guys

Anything else in the pipe?

Cheers dude! I feel you about the clean armour, but I'm petrified to go back and add weathering/battle damage once I've finished all the highlights in case I screw it up. I need to practice it but whatever hobby time I get I just want to get as much painted as possible. I'll get around to it eventually!

More Assault Intercessors in the pipeline, halfway through highlights now so should be up in the next few days hopefully. Thanks for checking my stuff out!

Next squad finished up!

Two are lacking squad designations on their knee pads, as they’re going to be the start of my veteran intercessor squad. I noticed the new assault intercessor kit doesn’t have the Indomitus Crusade sigil on the vambrace, so I want my veterans to be all crusade veterans and the normal squads to be a mixture of vets and more recent recruits. Will fill out my basic squads with the new kit, should help with pose variety too, mixing and matches the bodies and arms from the two kits. 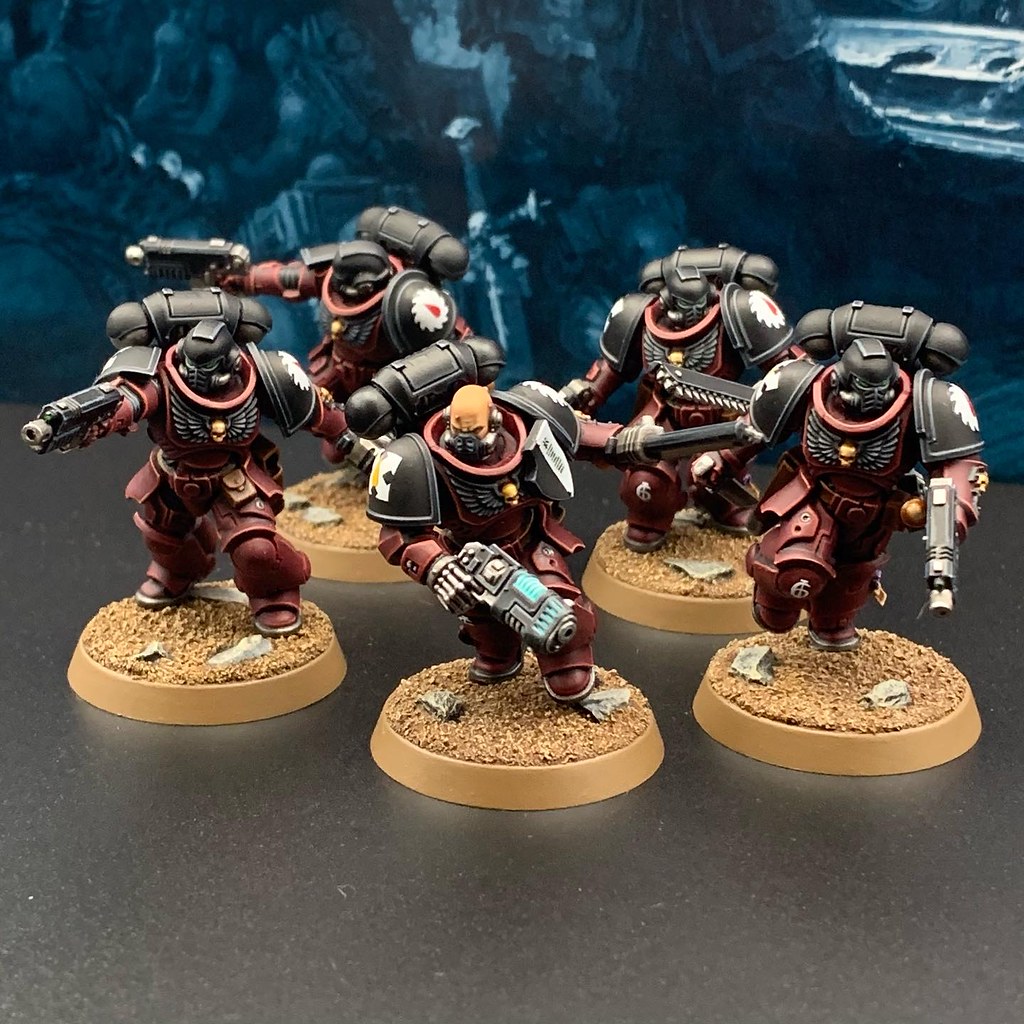 Currently building some incursors which seem like awesome models now I'm actually hands-on with them, and I've got some of the series 2 space marine hero terminators up for painting next, primed and ready for base coats.

All converted to have chainfists, because what true Flesh Tearer would opt for something without chain in the name?

Those are some beautiful models. 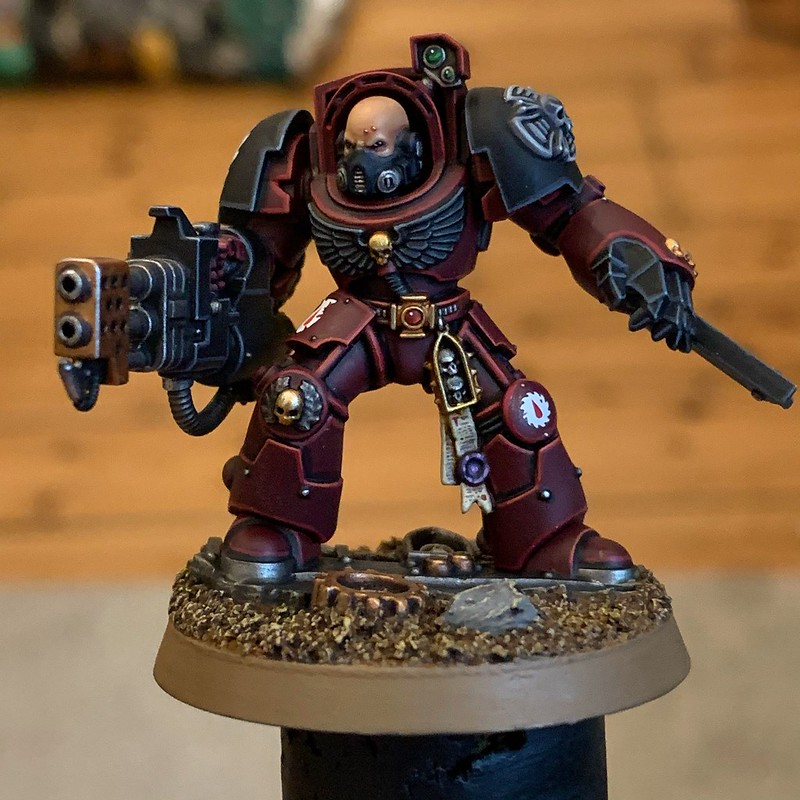 First Terminator Hero done! Absolutely love these sculpts now I've had a chance to paint them. Really made me hope beyond hope for a new Terminator kit soon, or maybe even some sort of Primaris version that isn't Gravis.

Rest of the squads coming along nicely too. Hopefully have some more images up before the end of the week. Good to be back on the wagon, thanks all!

These are definitely better proportioned than the standard ones.

You really do have that perfect burgundy wine red for your flesh tearers. Great work on the terminator.

Not sure how this thread has escaped my notice before now. Absolutely stunning work.

I wish I could hit like twice on that Terminator.

"The Black Library is not lore." 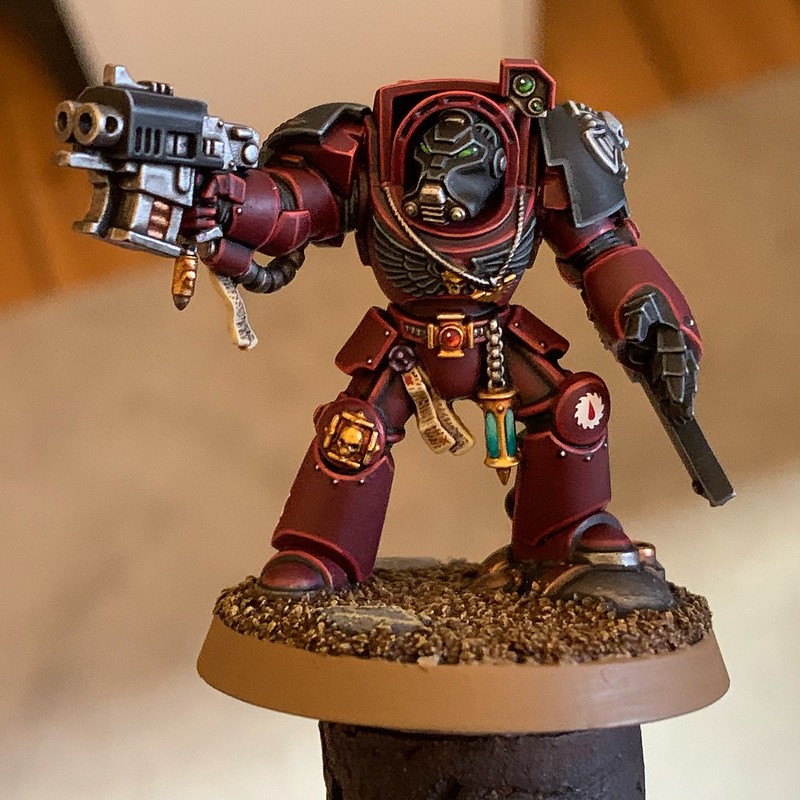 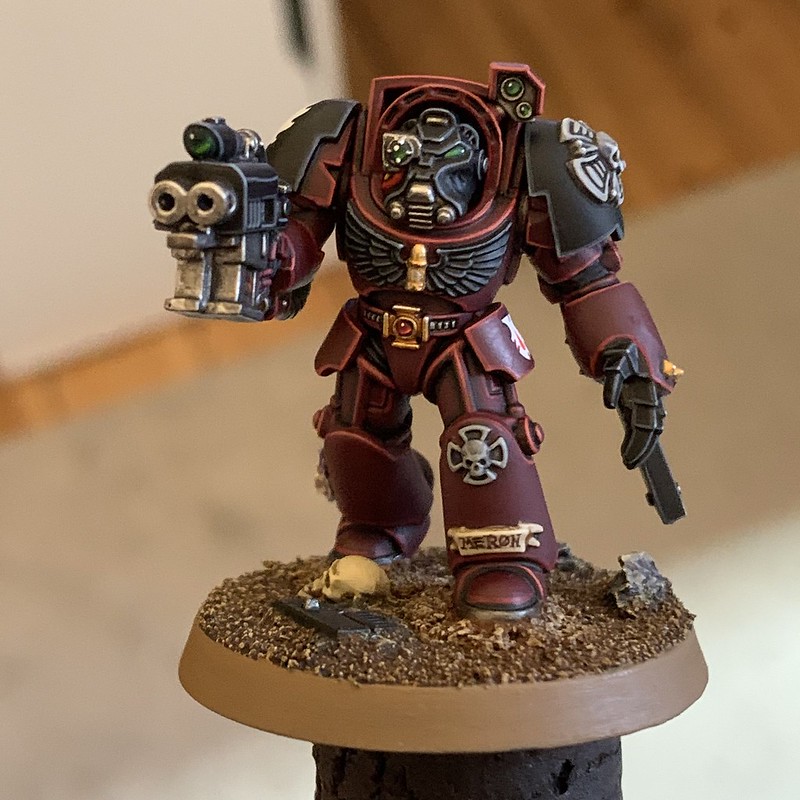 Two more down! Powered through and got these guys finished last night whilst listening to The Hunger audiobook on Audible. It's about a Flesh Tearers strike force led by Seth boarding a Space Hulk. Man the sound design and voice acting was stellar. Really channels the rage of the chapter. Highly recommended even if you have a passing interest in the Flesh Tearers or the Blood Angels.

Hopefully be able to get the last member of this squad and the Sergeant finished either tonight or tomorrow. Back with more soon. Thanks for the comments from everyone so far! Such an awesome community here!

Fine work on the Terminator. 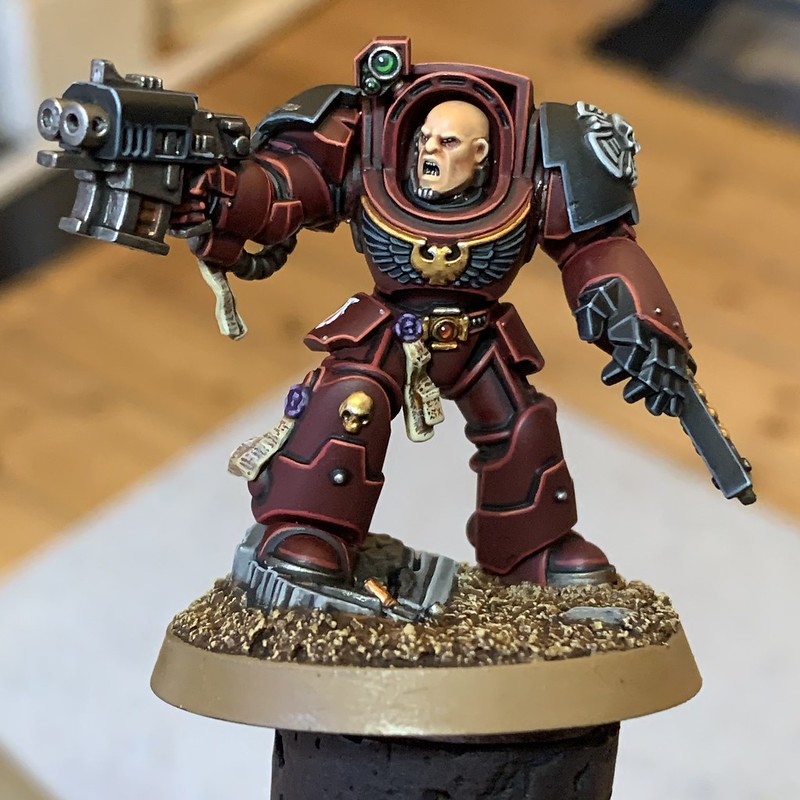 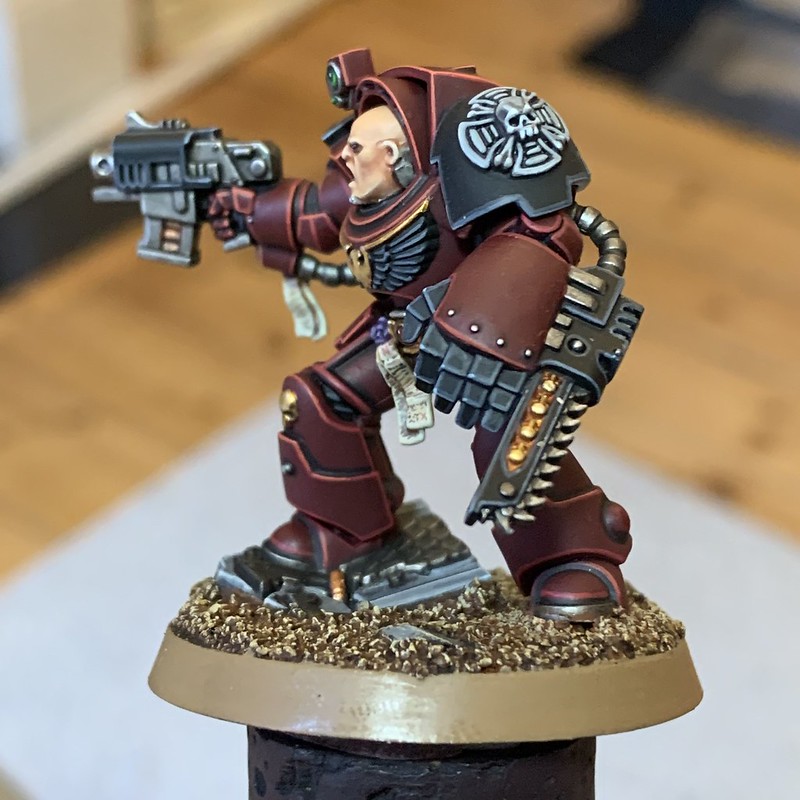 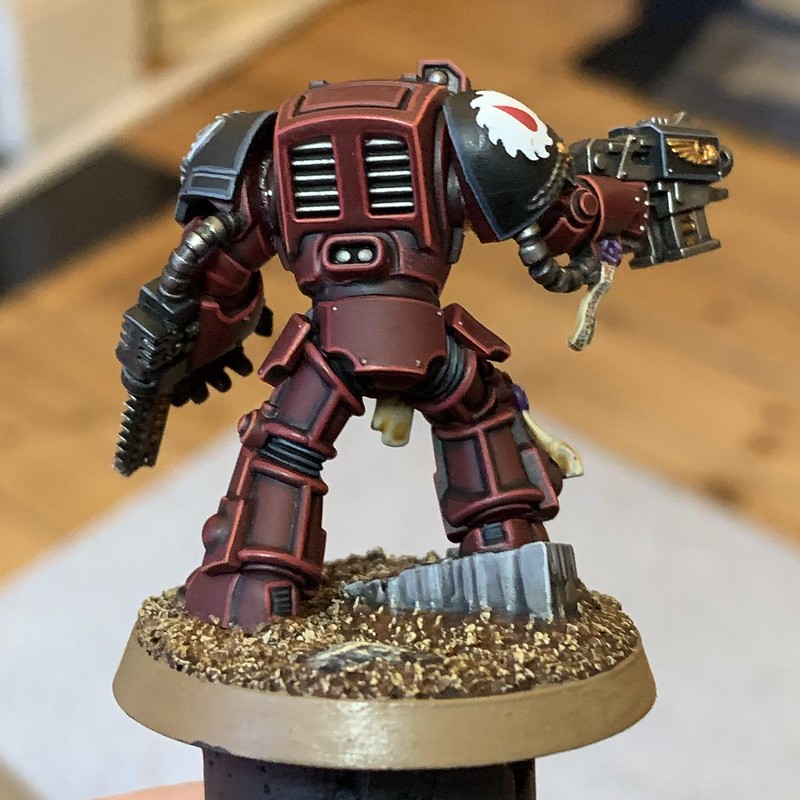 Next Marine done! Super happy with how this one came out. I think I prefer the bulkier legs of the heavy weapon equipped Terminators. This one was Brother Feurran, the series 2 hero with the assault cannon, with his arms swapped out to a storm bolter and chain fist because what Flesh Tearer wouldn't take a chainfist, hah!

I did just notice in the picture a little bit of plastic cement leaked out on the left arm which kind of sucks, will have to go back in and sort that out. Sergeant is very nearly done too which will be the full squad complete. Hopefully get some pics of him up soon.

Also yesterday I managed to get five Incursors and the Chaplain from Indomitus primed and base coated and finished my Repulsor build. Really riding the wave of hobby motivation at the moment, never know when it might slip again! 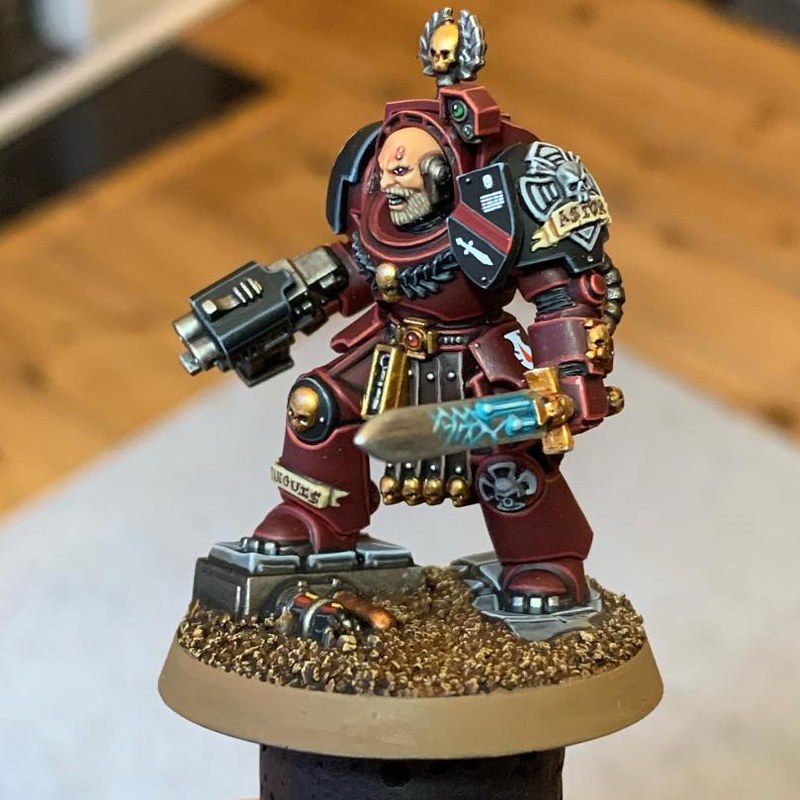 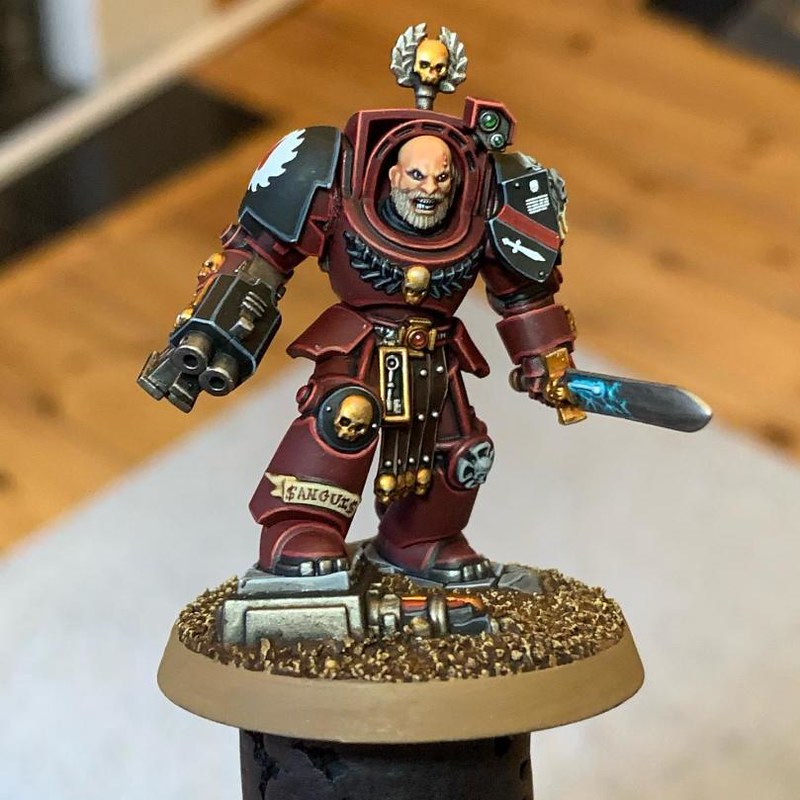 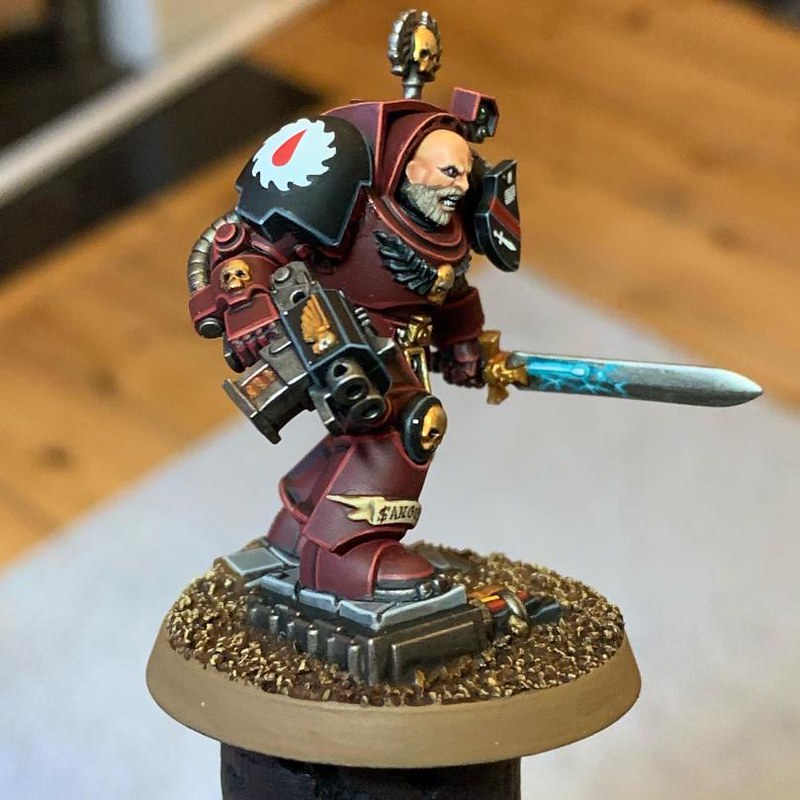 Sergeant Astor finished up, squad complete! Will try and get some pictures of the squad together in my Lightbox. These guys and a Chaplain in Terminator armour will probably be the only firstborn in my force, unless GW do another loyalist Hero line. I imagine them to be all survivors of the Devastation of Baal and the Cryptus campaign, assigned to 2nd company to keep an eye on their newer Primaris brethren.

Tried to get his face as angry as possible, like he's almost about to fall the the rage, with dark eye sockets and teeth bared. Also a red Death Company saltire on his crest as to remind him that he could fall to the curse at any moment.

It was also my first time trying the lightning effect on his power sword, I like once side but I don't think the pattern matches on the other so it kind of throws the effect. I think I might tone it down a little next time too, the outer side of the sword I went a bit crazy with the effect and didn't notice I'd changed the pattern, I prefer the side closer to his torso.

Apart from that, really happy with how these came out and stoked to get them off my shelf and in the cabinet. Moving onto a five-man Incursor squad next and they're already basecoated and I'll be starting shading later so hopefully more soon. Lovely models to paint so far and lots of edges to highlight. More soon guys, thanks! 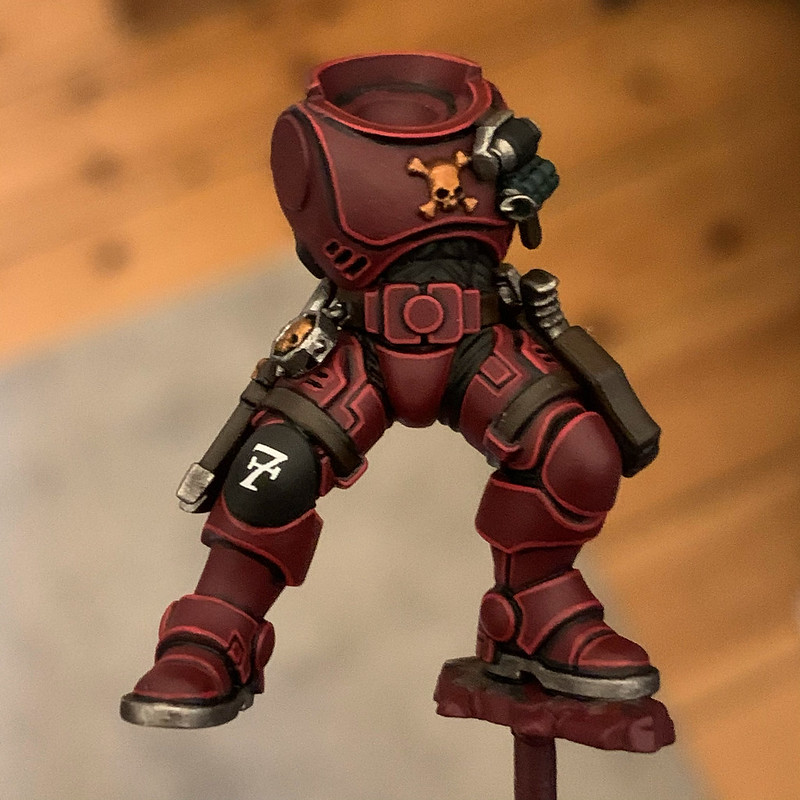 Made a start on my Incursor squad, really enjoying painting these so far, I didn't really rate Phobos armour when it was first released but it's really grown on me. Basecoats are all done and I'm starting highlights, there's a ton to do though so this squad may take me a while hah! 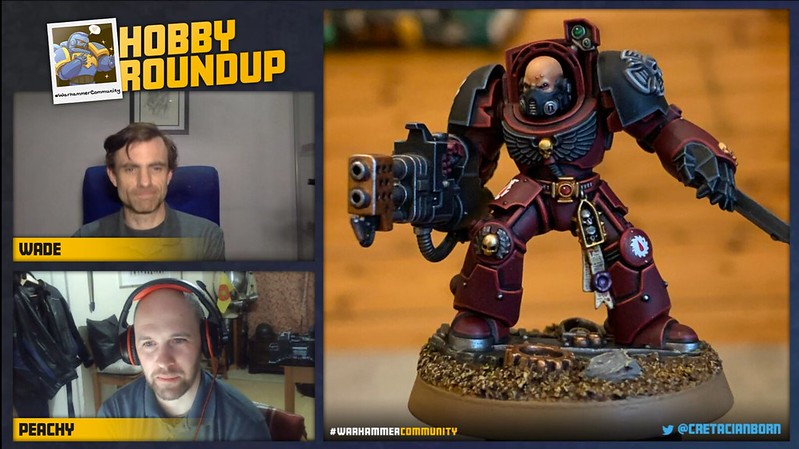 Also last week was a bit of a milestone for me as my Terminator Hero was featured on the hobby roundup. Wade and Peachy had some awesome comments and it was mad to see my work up there along with so many other talented painters. Been a nice couple weeks hobby wise, really motivated to get more done.

Thanks again for all the comments so far. Closing in on 1000 points painted now!

Great work on the terminators

Your models are so crisp, when I look at the pictures, the flaws or problems I think I see (to make me feel better about my painting) are actually pixilation and compression problems with the photo format. You do amazing work.