70 replies to this topic

Honestly, I'm still unsatisfied with Grey Angel. It introduces a "mystery savior" who is obviously implied to be one guy but can't really be because his actions don't vibe with the ones shown elsewhere, all while retconning the timeline hard and rendering Luther as a Horus fan - something that has literally no bearing on his secessionist motivations. If he was a fan of Horus, he'd probably have sided with him, but he didn't.

On top of that, it retcons Luther and co as having been sent back later than originally established (something we had to deal with after that point) but actually knowing the Sons of Horus surprisingly well, to the point of recognizing his captive - who is not a "true son", in terms of facial features.

And lastly, it establishes that Malcador knows of the situation on Caliban, and that he was able to simply send two of his Knights Errant - one of which barely managed to get back to a state of questionable sanity - over to pay them a visit, while the Lion's emissary fleet took another few years to even get there through the turmoil in the galaxy.

There's a lot of good stuff in that audio drama, but I can't help but think of it as a retcon piece, with a lot of superfluous added bits that do nothing but muddle the waters, than something that really needed to exist.

I was joking about Grey Angel. It only served to muddle the waters.

Now that I’ve successfully ordered my copy, I feel that I can safely ask- why is Luther Mark Gatiss on the cover?

I'd just expected scalpers to see the word Limited and lap them all up anyway.

Got my copy ordered. Very curious about the plot.

Thorpe’s Track of Words interview has me thinking this will be one of his better works. It’s in first person too, it seems, and I think Thorpe really benefits from that. Still waiting for the regular edition release myself, but I hope others like the LE.

Got mine ordered now that US preorders are up.

I do really like the artwork on the inside cover they show on their webstore. 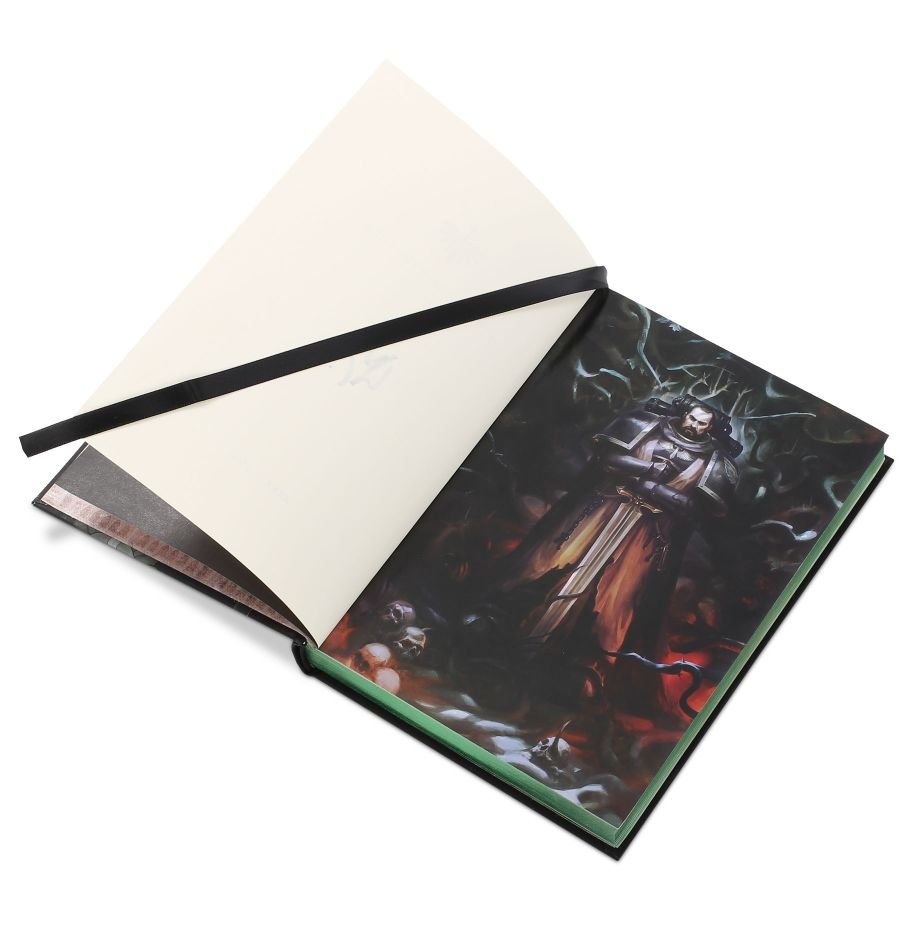 I also just pre-ordered my copy. While I am not a huge DA fan, the whole Luther arc was always an interest to me since like second edition. His whole being locked up deep in the catacombs and mumbling stuff. I think this one will be good. I do think Gav has really hit a stride the past couple of years. I was never a fan of his early DA and RG stuff but I think in general his writing has vastly improved. His later works like Lorgar was easily a top 3 Primarch book for me. I think this one will be very solid. I wish I can say the same for Guymer's stuff...his DA stuff is pretty bad as well as his IH stuff...like easily the worse I have read.

Also that cover art of him holding the sword is very Azrael-like from the older (second edition?) pose. Love it!


It’s a bigger print run than Valdor, maybe that was a factor- folk have proven themselves to be pretty completist when it comes to series...

I bloody forgot it was out today 😭

I'm hopeful that this was a worthy purchase! I liked Lorgar almost as much as I hate his other Marine-stuff. The guy is at his best when not dealing with them so Im hoping this is big on just Luther and maybe some Caliban.

Its sort of hilarious that I still hear so much hate for the Ferrus book, its a truly exceptional work imo. But ymmv rules eternal.

Will look great on my shelf anyway, provided it doesnt prove to be the straw that breaks my wooden camel's back lol.

Incidentally, I like to commit the cardinal sin of writing fanfiction: https://forums.space.../#post-41266642

Is there a release date for the normal and ebook versions?

Is there a release date for the normal and ebook versions?

Should be out around March.

I managed to snag a copy before they all sold out. I will admit that fully expect to be dissappointed by the novel, as it is Gav "Lacklustre" Thorpe...but I love the topic matter and the book looks awesome and will certainly look fancy on my shelf.

I’m a sucker for pretty books, and the Dark Angels - just not so much on Gav as a whole. Ordered my copy, and I just hope the story doesn’t disappoint. The art they’ve shown so far is great though.

I liked Thorpe's response to the question of why he has worked so often on the Dark Angels and his take on the Fallen. At least this seems like it will have some heart behind it, unlike the Lion's Primarch entry.

It's interesting to me a lot of the DA fanbase are tired of most stories focusing on the fallen, but for me it's the only thing dinstinct the legion has going for it story-wise with any potential thematic weight.Anything else you can do just as well with a hundred other vanilla or knightly order themed chapters.

I'm with you there. The Fallen and their hunt for them are the defining feature. Sure, they got the Deathwing and Ravenwing, but other Chapters also have terminator elite companies, and the Scars are made for biking. It's all about the levels of secrecy for me, when it comes to the Dark Angels - and it's rooted in their history and eternal quest. The schism is the heartpiece of it all.

What happened on Caliban, to Luther and the Lion is integral to their existence much more than the newly added organization and Better-Than-Thou narrative. It is why they're based around a floating piece of planetoid, why they're segregating so much knowledge, why they've made a cult out of deception and lies, including those they tell themselves. The Fallen are the manifestation of all they screwed up as a Legion, or through their Primarch, and they've been the throughline ever since Caliban still existed. Luther found the Lion and raised him as his son and new liberator. Luther and the Lion had a falling out, and it created a schism. The schism destroyed their world, their Legion, their Primarch, their future - and the schism isn't over yet, only diffused and scattered across time and space.

The one point I hope we will reach at some point is one where the list of the Fallen still out there is nearly completed - and that's something that even Gav has been driving closer to in his works. There are few of them left unaccounted for, besides Cypher and possibly Astelan. And those two are probably the most important to apprehend. Now that Luther has vanished from the Rock, there are countless great narrative avenues they could take with him and the remaining Fallen, and Cypher's whereabouts have been up in the air for a century in-universe.

The question is what will happen once the Fallen are all taken care of, and the Dark Angels find themselves without that driving force in their own organization and cult. I'd like to read stories that lead towards that point, not ones that abandon the Fallen narrative for shooty shooty pew pew against irrelevant enemies on irrelevant worlds - although those can still happen, when focused on a character we know, using those things as part of their characterization. But any notable character is also in the know about the Fallen, and thus their thinking and motivations will still partially revolve around their secret shame.

Most are tired of the focus on the fallen because many times it isn't handled well. Having every other thing in-lore be about how your faction runs away because they saw a fallen gets exhausting, and is just not fun.

I wouldn't dismiss the RW/DW though, the Ravenwing being central to their organization predates the White Scars being added to the lore.

But I agree, it is a defining part. I'm hoping that we see some good stuff in how this is handled, I especially am interested in Luther's reasons. I think conveying that information is definitely prerequisite to moving forward with anything about Luther's escape and the legion of Fallen.

I also would like to see some of the heroic aspect to Luther explored. Perhaps see something in the Horus Heresy conflicting with the traitor legions. He is remorseful after the fight with the Lion on Caliban, I think it should come across as a brooding, but somewhat impulsive decision made. Where perhaps he was dissatisfied, but still loyal during the Heresy, etc. Being repentant and rejecting Chaos in such a manner doesn't come across as the actions of a man that has long made the hardened decision to go renegade.

He decided that the Imperium was destroying the things he held dear, in particular Caliban, which he dedicated his life to saving from monsters. He didn't really side with Horus at any point, though - he just used the civil war as a way to gain an advantage for Caliban, either which way.

But in the end, he was still open for reconciliation if Angels of Caliban was anything to go by. It wasn't until he was thrust into a disastrous turn of events, thanks to Zahariel, that he truly abandoned the Lion, I'd say. Luther's hesitation is something that was remarked on in AoC in particular.

Hopefully we'll find out more about the arcane library he went through after the fall of the Knights Lupus.

Also tagged with one or more of these keywords: Blacklibrary, Dark Angels, The Fallen, Unforgiven, Horus Heresy