The story of the Emerald Ghosts began, as with many before, with the tale of a noble, loyal Chapter of Adeptus Astartes.

Though currently designated as Excommunicate Traitoris by the High Lords of Terra and the Inquisition, the Emerald Ghosts began as a valuable addition to the forces of the God-Emperor of Mankind. A fleet-based chapter that often drew its recruits from worlds that had benefited from their actions. The Chapter embodied all that the Space Marines were meant to be. Much of the details of their history has been lost to the ages and ravages of time, including such details as the source of their gene-seed and the Founding that brought them into the Imperium.

We do know, however, the events that would lead to their fall from grace and would lead them into the service of the Ruinous Powers.

The Emerald Ghosts, as a fleet-based chapter, had chosen to answer a summons from an Imperial world called <Redacted by the Inquisition> that had fallen under attack by foul xenos of unknown origin. The entire fleet transitioned into the Warp en mass and began the journey to relieve <Redacted>.

And then, they disappeared.

Some two centuries later, the fleet... intact and in the same condition as the day that they had entered the Warp... transitioned back into Realspace. In fact, for the Emerald Ghosts, no time had passed at all. The world of <Redacted> had long since been reduced to a lifeless ball of rock by the xenos scum that the chapter had intended to protect them from. And that lead to certain elements of the Imperial Inquisition to question the integrity and loyalty of the Ghosts.

The chapter protested loudly that they were not corrupted in any way, not in body nor soul, and they universally submitted to the barrage of tests and nearly-torturous trials of purity at the hands of the Inquisition. The Inquisition found no evidence of any corruption... but suspicions ran deep and the Ghosts began a long, grueling period in which their integrity and loyalty were constantly questioned even while they valiantly fought the enemies of Mankind.

In the following two centuries, the chapter continued to have their reputation besmirched and even bore the humiliation of other Imperial forces outright refusing to fight alongside them. Yet still they persevered. Until the fateful battle of Newington VII where the Ghosts would turn on their brethren and hand the world to the Great Enemy.

From what we know, the Planetary Governor of Newington VII had made an astropathic broadcast for aid as his rule was jeopardized by a shocking, and sudden, rebellion that had been fomented by forces of the Ruinous Powers. The Newington PDF was struggling to contain the rebels and the planet desperately needed help. And so the Ghosts... as a complete Chapter... moved to relieve the beleaguered world. Upon entering the system the Chapter Master of the Ghosts, <Name Redacted>, sent the entirety of the Chapter's Fourth and Eighth Companies to establish a beachhead and begin actively fighting the enemies of Mankind.

They were met with the massed firepower of the Planetary PDF and, not expecting that they would be taking friendly fire, were cut to pieces.

The command to open fire came from the Lord Governor himself, having been told many stories of the corruption and disloyalty of the Ghosts over the years... and having been fed lies and falsehoods by one of his Senior Advisors... believed that the Ghosts had come to join the rebels and finally show their true colors. This attack had taken the Astartes completely unaware and they opened a line of communication with the Governor. He accused them of coming to aid his enemies and vowed to hold on until "true help" arrived. Confused, shocked, and angry the Ghosts continued to send forces to the site of their embattled (and maimed) brothers. The PDF continued their attack and even more Ghosts were killed.

When Chapter Master <Name Redacted> once again opened a line of communication with the Planetary Government he issued the following statement:

"We have come to you in your hour of need and you have not only rebuffed our aid, but you have attacked us and drawn the blood of men that meant only to help you.

Those of our Battle-Brothers who have fallen to your guns will be avenged. If you wish us to be your enemies then that is what we will give you.

You will reap what you have sowed."

All communications ended and the Emerald Ghosts then began deploying planetside as a Chapter, executing a textbook Planetary Assault that would have made Guilliman proud. The cheers of the ignorant populace at seeing the fiery trails of Astartes drop pods and Thunderhawk gunships coming and thinking that they were about to be rescued by the Emperor's Finest turned to cries of horror and all hope of being saved from the forces of Chaos turned to ash in their mouths as the Ghosts landed and immediately turned their guns on them.

By the end of the day, as the combined assault of the enraged Space Marines and seemingly limitless supply of rebels and heretics began to close in on the Governor's Palace, the man realized that he had orchestrated his own doom and turned to ask his advisor what he should do only to find that the man had disappeared now that his role in the twisted plan of the Ruinous Powers was complete. The last act that the Governor performed was to send a message to the Imperium to inform them of the treachery of the Ghosts, though he left the part that he had played a secret that would not come to light for many, many years.

The Ghosts, with their spirits broken and their trust and faith in the Imperium betrayed for the last time, fully accepted the consequences of their actions and would from then on act out a seemingly never-ending Crusade of Vengeance in the centuries that have since passed. Many of the Battle-Brothers who had survived the events on Newington VII have continued working together as a massive fleet of raiders but some of them have left the company of their brothers to strike out on their own. The heretics, though exhibiting many signs of the inevitable corruption that comes with serving the Ruinous Powers, mostly continue to wear armor in bright, brilliant green that had been their proudly-worn livery. They do this to spite the Imperium of Man and as a point of pride.

The Emerald Ghosts tend to be encountered most frequently in the Segmentum Pacificus and are to be considered to be a great and terrible threat to this day.

So, yeah, brothers. This is the start of my DIY Chaos Space Marine Plog. I hope you'll enjoy following along as I dive into this... my first ever Chaos army!

Thanks for looking and I'll see you soon!

Looking forward to these guys

Yeah, cool background - I'm usually apprehensive of reading such a wall of text, but it was worth it.

Thanks to both Grotsmasha and Dr_Ruminahui for the comments... and for wading through the wall o' text background. and everyone else, too!

I wanted to do something to catch everyone's attention! Haha!

So here's a really bad picture of the test mini so everyone can see what I'm trying to do: 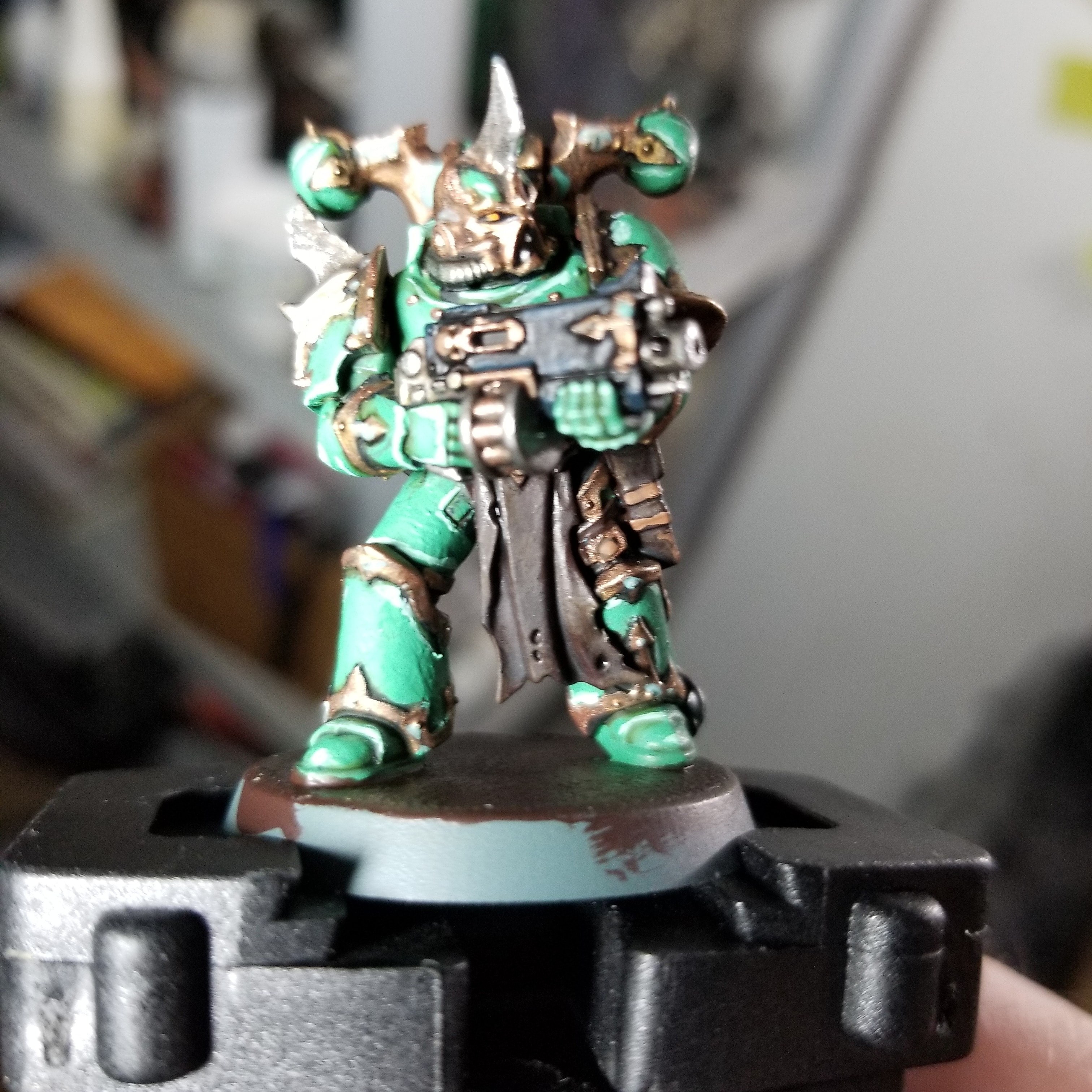 Looks good - though, I think the eyes should be red to add more of a contrast to the green.

"Agents of stealth and misrule they may be, but when the Alpha Legion unleash their martial might, worlds shake at their tread."

The eyes are actually a nice orange but the photo doesn't show it too well.

I did get a light box and I'll be working on better photos in the future.

I have considered adding Codex stuff, as a matter of fact. I'll definitely think on it, for sure.

Edit for clarification: the green armor is done with GW's Sybarite Green and the (poorly done) edge highlighting is Gauss Blaster Green in case any of you were wondering.

Lovely backstory and cool color scheme. Looking forward to see more. I do agree with Lucerne though, some loyalist marine backpacks, helmets and shoulderpads sprinkled in will really help sell that renegade backstory they got going for them.

Nice green, will look like a unique army on the tabletop - keep it up!

Awesome colour scheme, definitely stands out from the crowd. Have you got any plans for markings (tactical, chaos runes, personal heraldry, furs...)? If so, what colours are you planning

The armor is GW's Sybarite Green with Gauss Blaster Green edge highlighting and the metal trim has been done in Sycorax Bronze... I was thinking that some (or most) markings will ne Chaos Star type stuff and I've been considering using something in an orange for the sake of contrast/visibility but we'll have to see how it all looks in test, first.

Yeah orange sounds like it could be good, but also how about pinky-purple? That way you hit the three secondary colours, which makes a triadic scheme

Also tagged with one or more of these keywords: heretic astartes, chaos, undivided