Craftworld Eostaera (and probably other stuff too)

Ugh, its been like a year since I did a plog. I've been terrible for hobby slumps this year.  But, I'm trying to get my mojo back by starting a project I've had in mind for a while.

I've been eyeing up the various Xenos fandexes that have been written for the 30k setting and while I haven't settled just yet on which one I will be using I figured I could still make a start on the core bits of a Craftworld army.

I'd spotted the Vallejo Shifter paints on a couple of youtube videos and immediately thought they would be perfect for Eldar with all of there curved armour, even on vehicles.  The one I decided to go with was the Pearl/Violet from the Magic Dust box.Some of the other colours are super neat too and I'm sure I will find uses for them all down the line! I wasn't sure what accent colours to go with initially but in the end I settled on a pale grey with silver metalics.

Next I needed to come up with a name for my craftworld.  Looking into the Eldar naming conventions there is a lot of Celtic/Gaelic influence there and since a few of the canon Craftworlds have names drawn from Gaelic festivals I decided to go with a mix the Spring Equinox celebration of Ostara and the goddess Ēostre whose name we derive modern Easter from and I chose "The Dawnstar" as its pseudonym owing to, especially Ostara's, ties to the celebrating the dawn and new beginings.

I've not super fleshed out the background as yet but I see them being one of the more active Craftworlds during the time of the Great Crusade and Heresy, actively pushing back against the Imperium in places and, especially during the Heresy, meddling in the conflict and attempting to influence the outcome.

Whether this leads to them having ties to Eldrad or not I've not yet decided, what I do know know is in the current timeline of events within my own headcanon they are currently attempting to find something on the Imperial world of Mycenae, a strategically unimportant but mineral rich world located on the very edge of the Ghoul Stars.  Unfortunately for them the planet is currently undergoing its second compliance action as elements of and Ork WAAAAGH landed on the planet in the years after the triumph at Ullanor and the 73rd Expedition Fleet, led by Warsmith Thaddea of the IVth Legion has been prosecuting a protracted war with the dug in Orks for a number of years in an attempt purge them from the planet.

So thats the gist so far.  Now on to some pictures.  I've finished up the first squad of Guardians with a Warlock 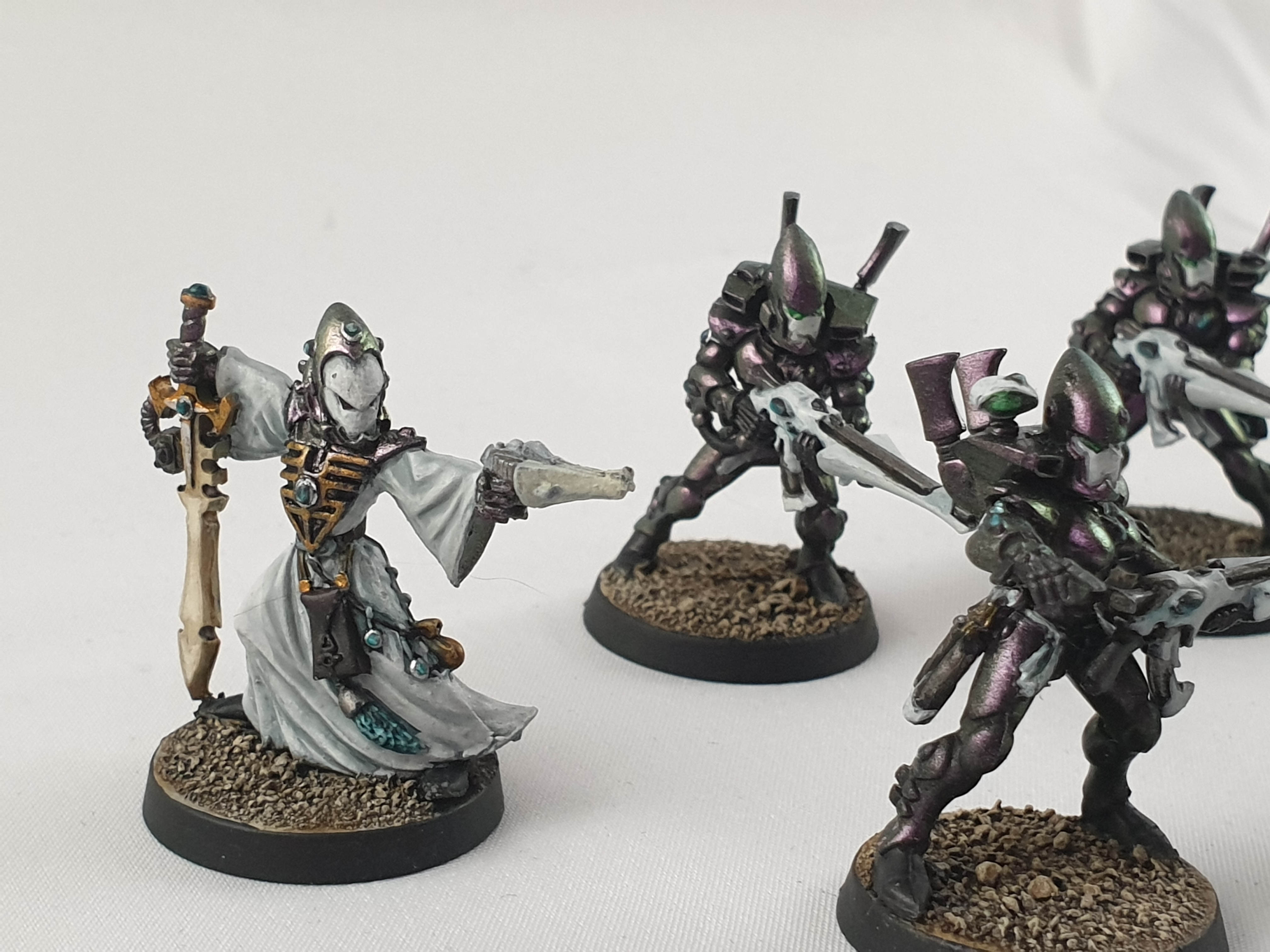 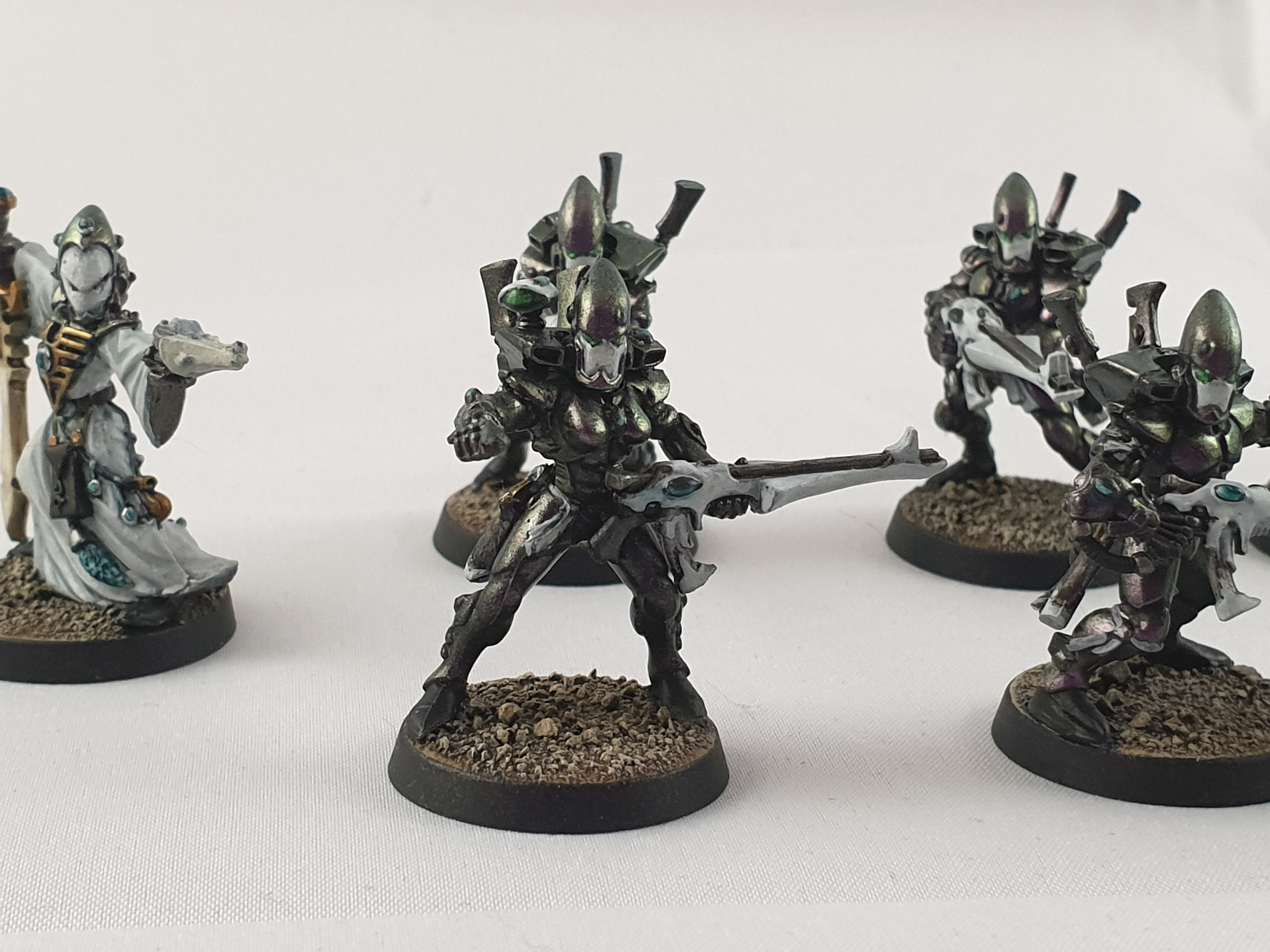 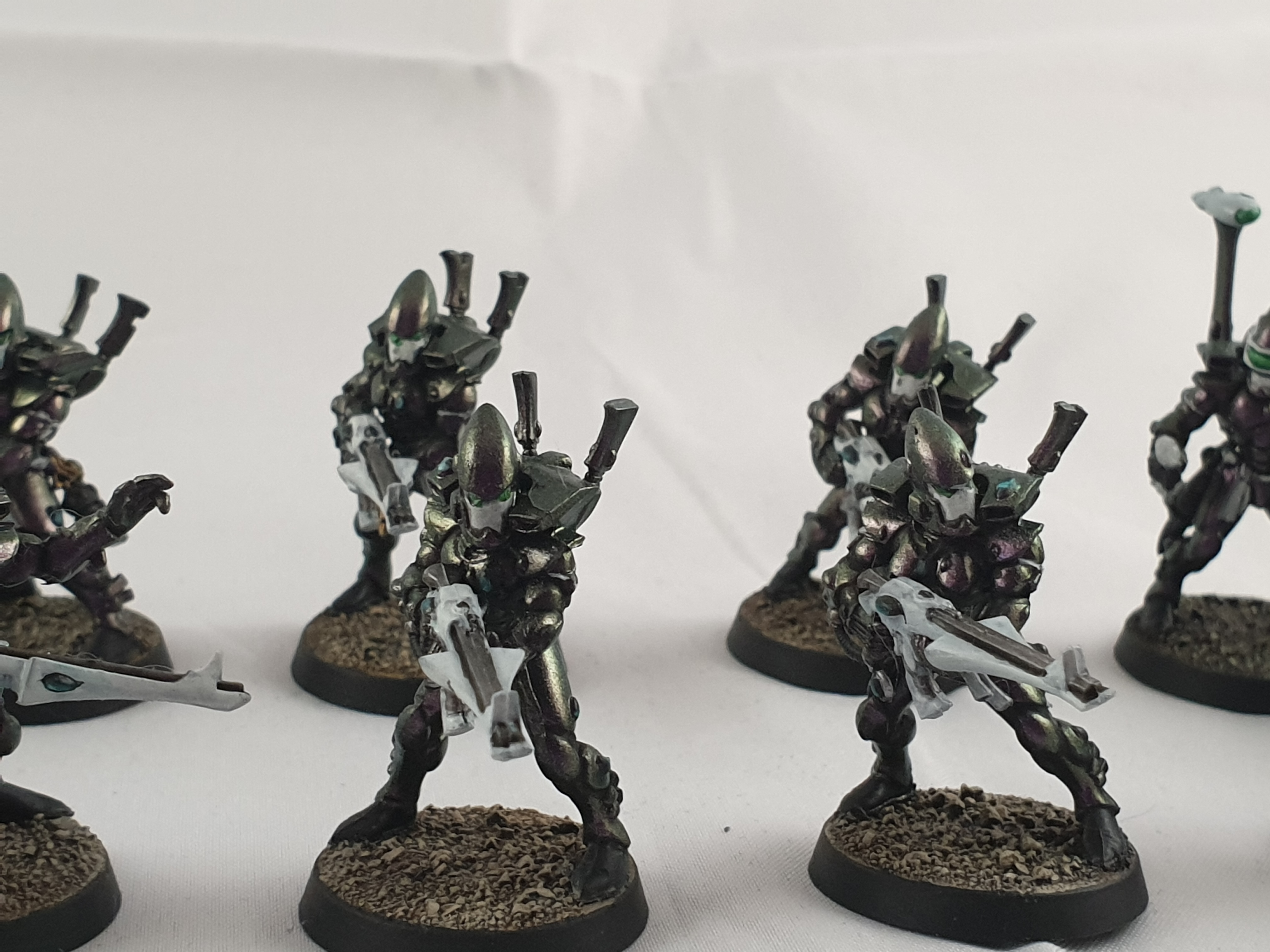 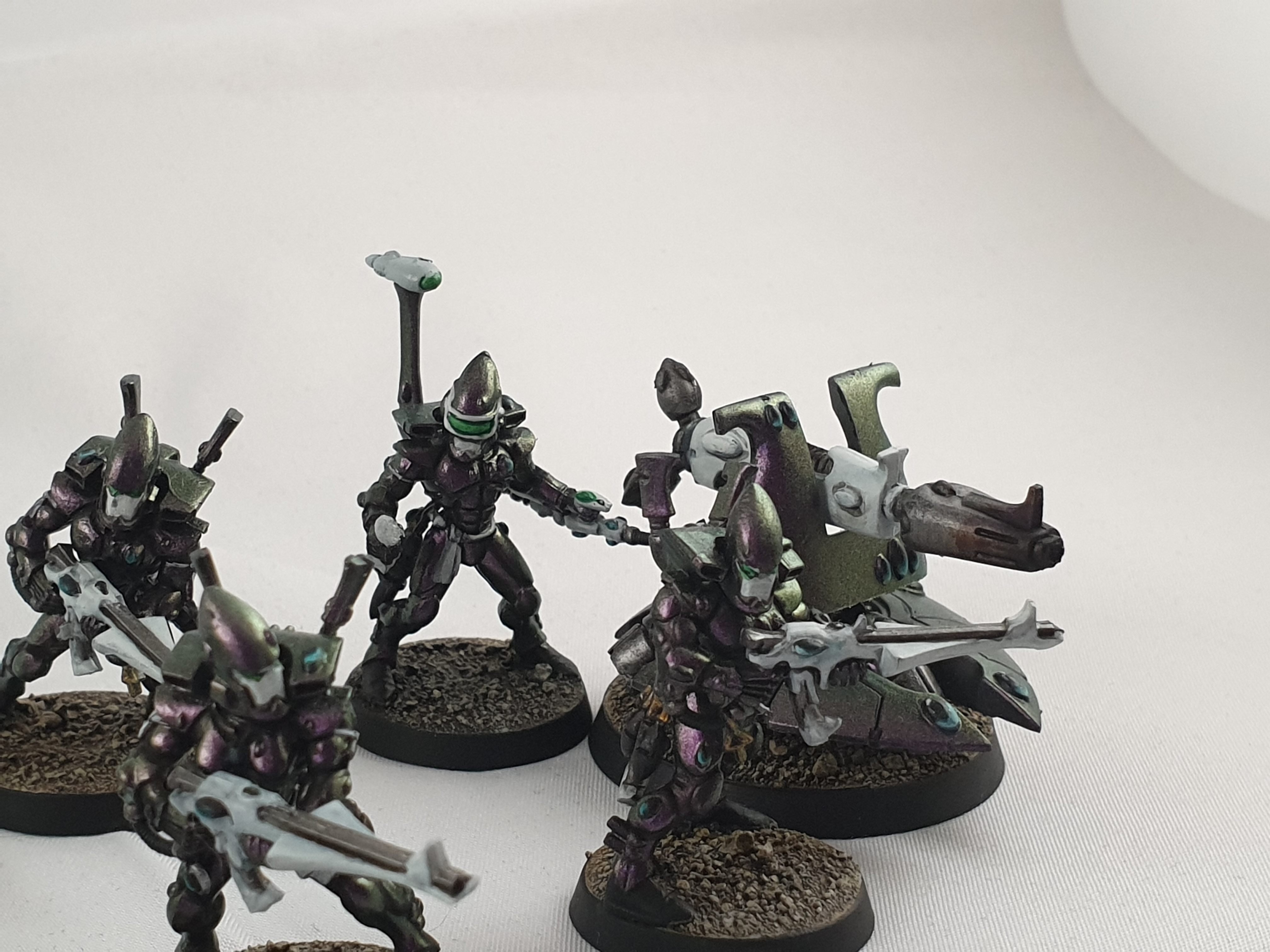 I kept the first squad pretty basic while I got a feel for the Eldar but I definitely plan to do some converting to future squads to add some more dynamic posing and a bit of variation.

Here is the rest of what is currently on my WIP bench for these guys, An Autarch, some Dire Avengers and Swooping Hawks, a Wraithlord, a Falcon (complete with LED's in the engines and fibre optics in the cockpits) and a pair of Wasps. 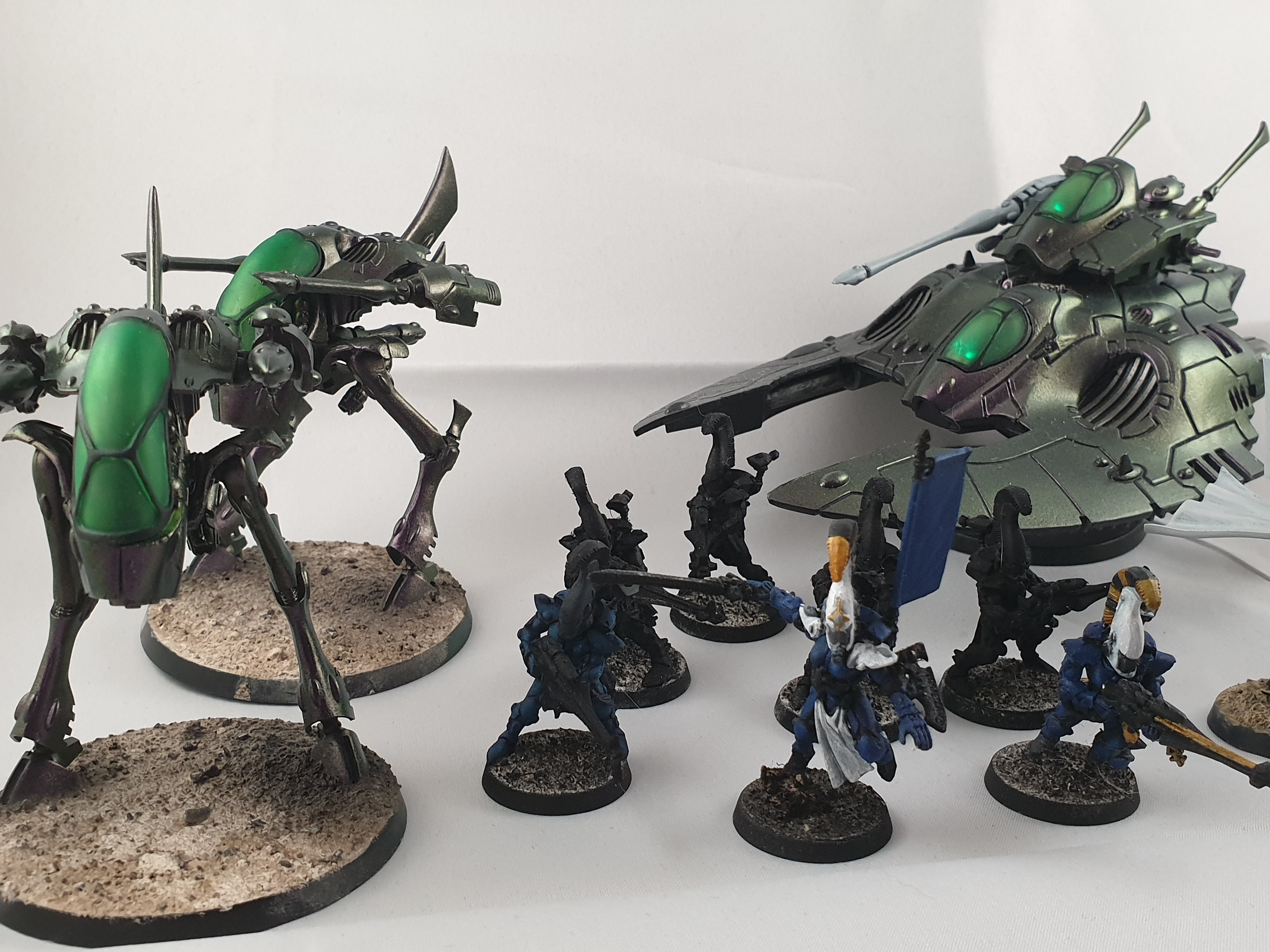 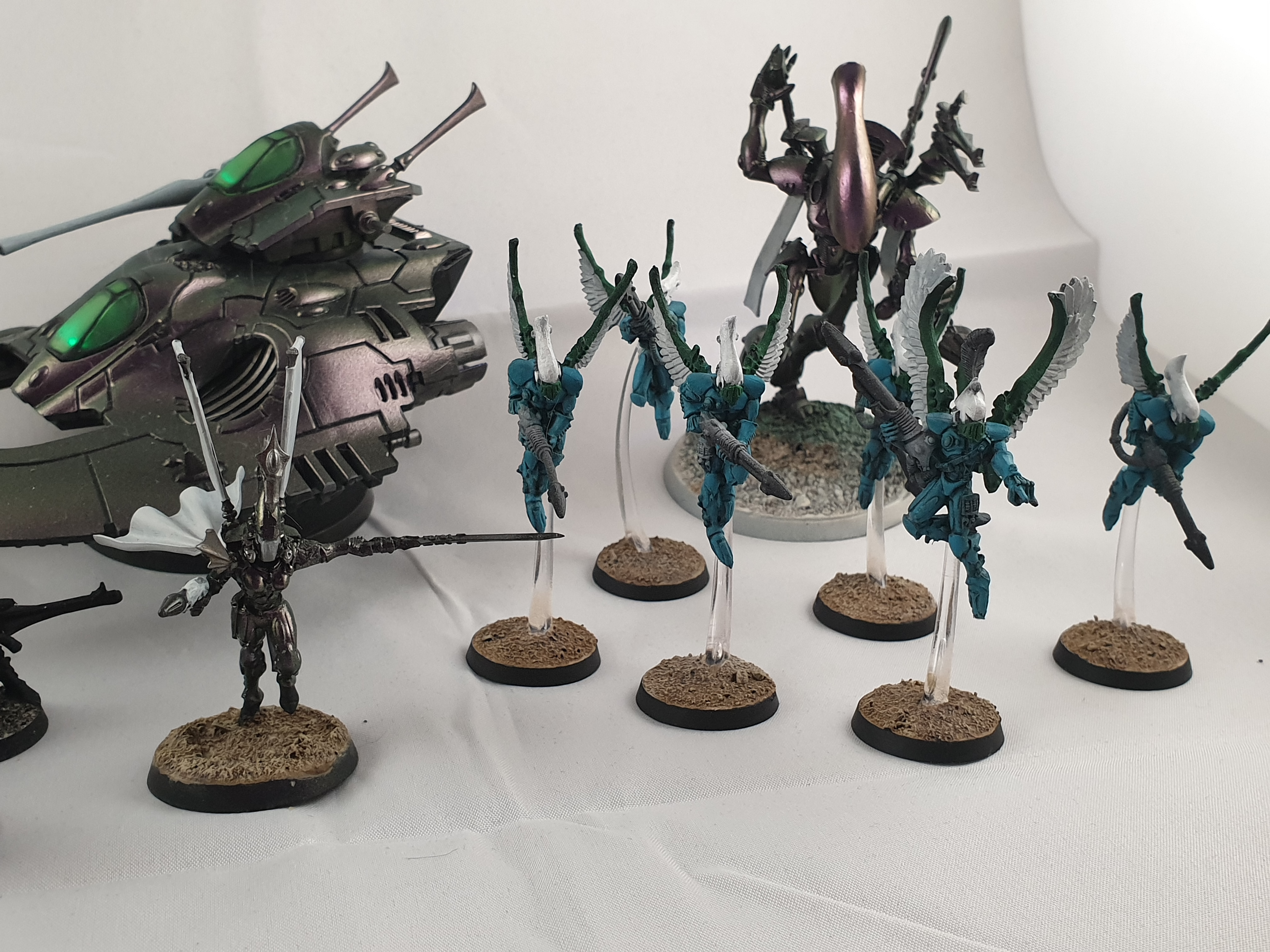 I'm hoping to keep this log relatively up to date as I work through stuff, the hope being it will keep my enthusiasm for the project up. Fingers crossed eh?

I've not seen metallic Eldar before, that looks really nice.

These look really cool! Interested to see how these grow

I've not seen metallic Eldar before, that looks really nice.

Thank you! I recognise your name from way back at The Great Crusade/First Expedition!  Yeah, I'd not seen a lot of metallic Eldar but I thought the shifting paints would suit them well.

These look really cool! Interested to see how these grow

Thanks! Hopefully I wont disappoint.

I did a bit of work on the Autarch last night, I feel like the cloak maybe needs a design or something on it to break up the surface and I also need to decide what I'm doing wit the banner. I'm thinking of using the central star from this as the Craftworld Symbol so this will be on at least one of the banners.

and heres the Autarch as she stands.  She also needs a name... 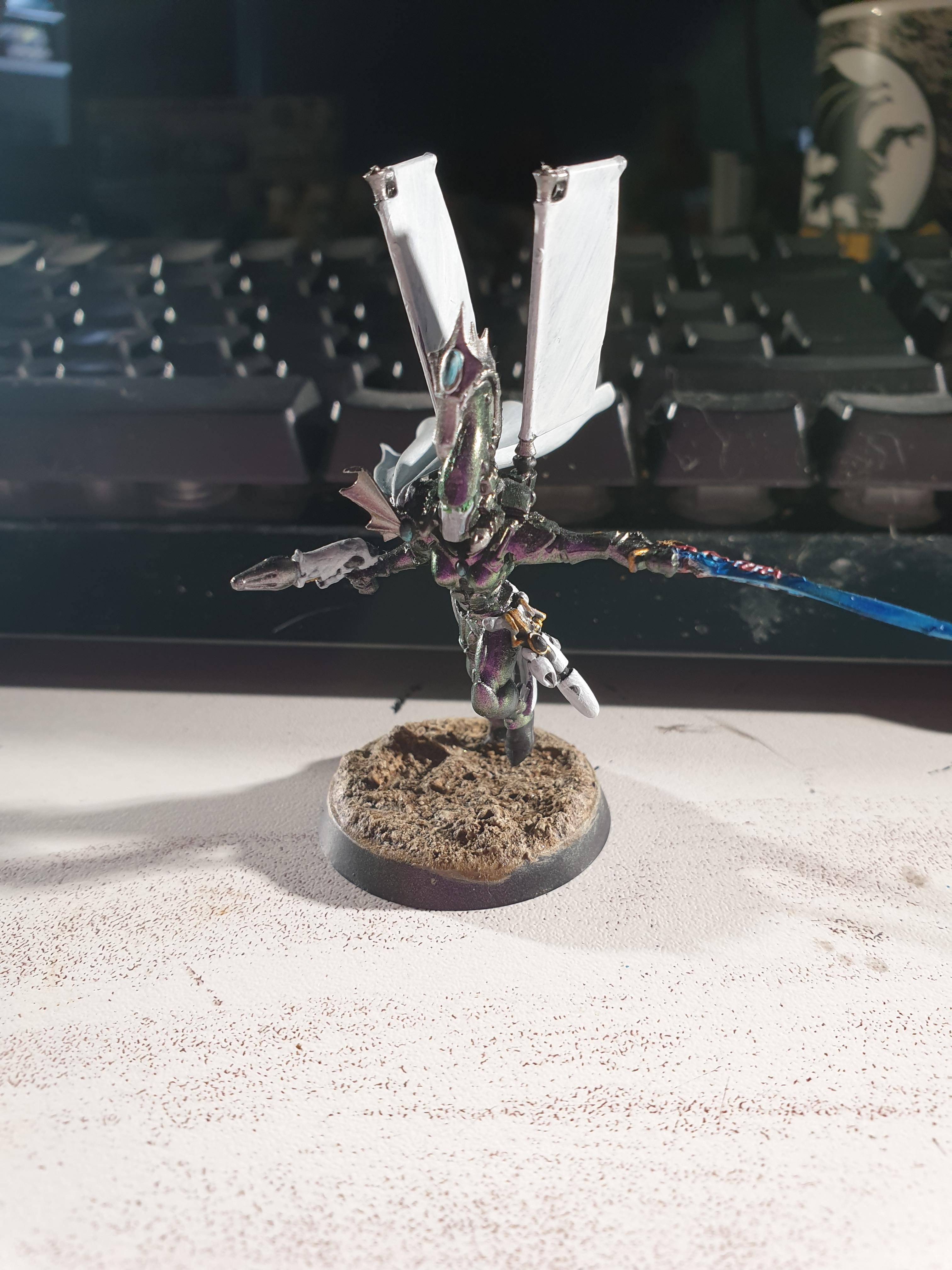 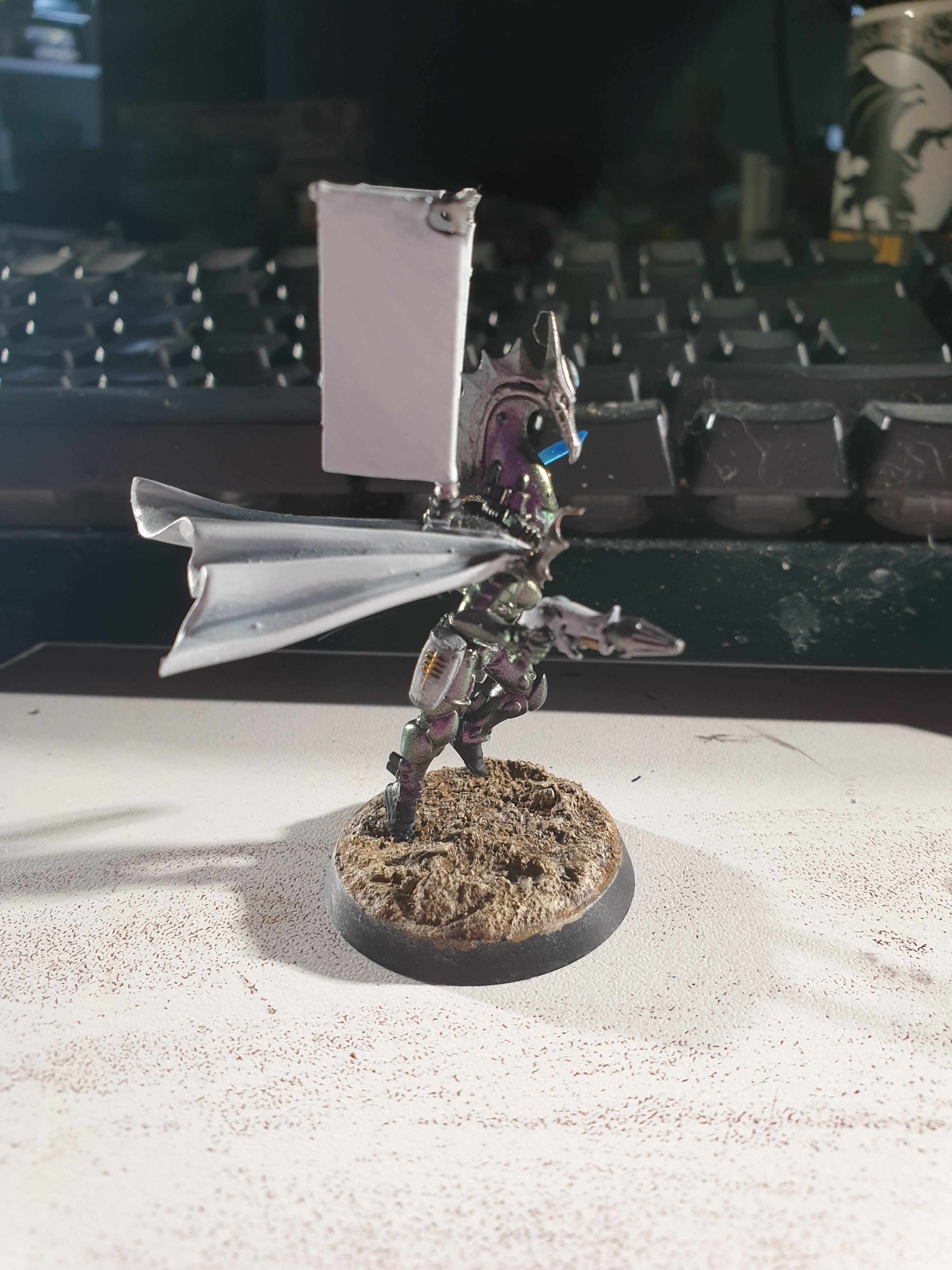 and a bit of detailing on one of the Wasp pilots 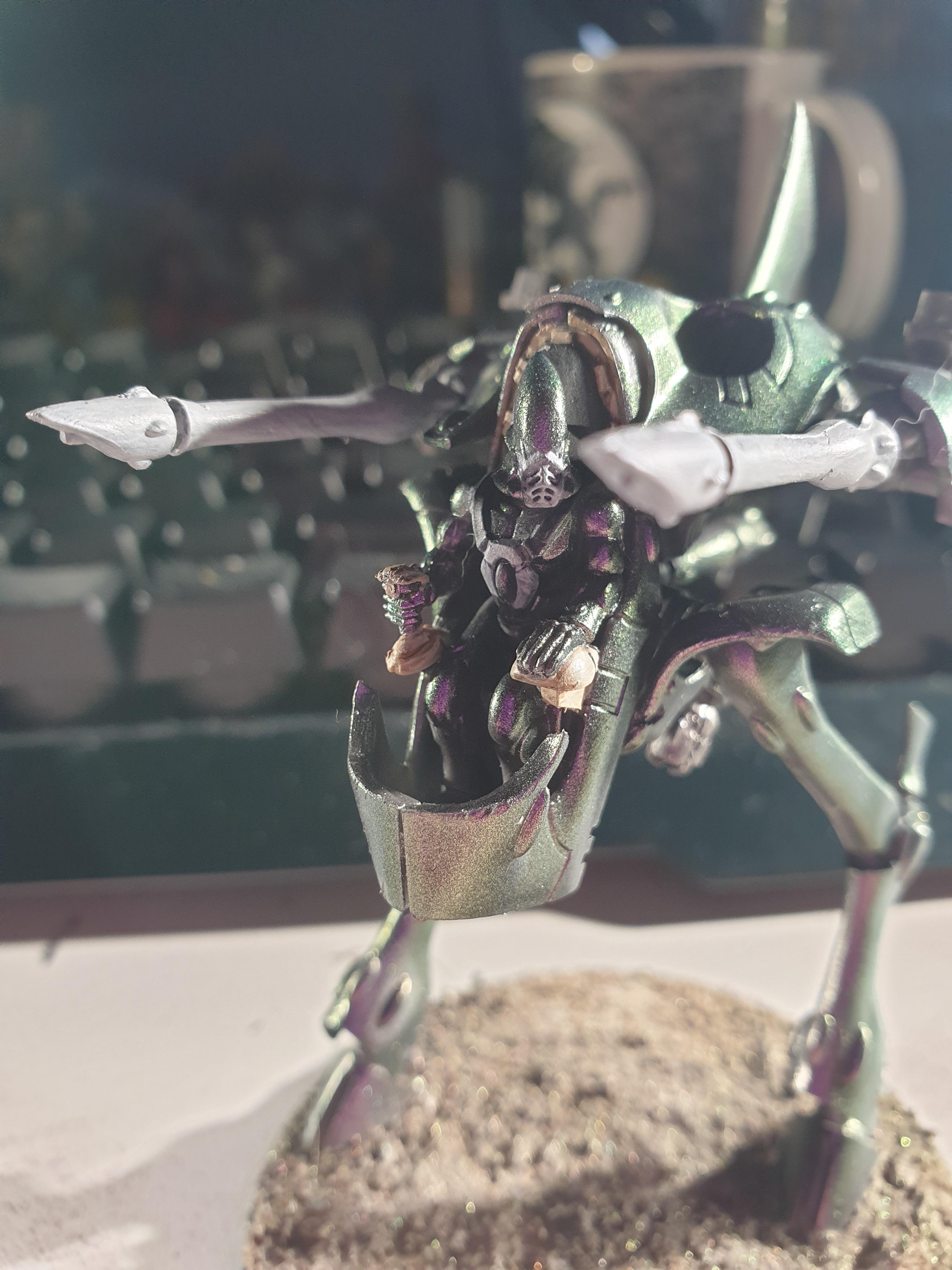 The plan is to finish the Autarch and the Wasps this weekend, probably...

These are great! Nice to see some pointy ears, and a custom craftworld no-less! Good work delving into the origins, that high elf star should be easy enough to source from the old fantasy ranges if you're planning on using it throughout the army, the old embossed shields would tie in well with the vehicles.

These are great! Nice to see some pointy ears, and a custom craftworld no-less! Good work delving into the origins, that high elf star should be easy enough to source from the old fantasy ranges if you're planning on using it throughout the army, the old embossed shields would tie in well with the vehicles.

Thank you! yeah, it was actually digging through some old HE bits that made me settle on the design, I was never a fan of using the shield bosses on my fantasy stuff so  Ihave a ton of them left over!

So, I think I've settled on which rules I'm going to build the army around, I'll be using the 1d4chan rules as I like the idea of a more unified Eldar force that can field units (although restricted) from the Eldar and Dark Eldar ranges together.  With that in mind a little project I had in the back of my mind for a while is taking shape:

Once a numerous Aspect Shrine on many Eldar worlds and Craftworlds the Weeping Blades embodied Khaine as a killer. Sinister of aspect and armed with two handed power blades the Weeping Blades once formed the vanguard of many Eldar strike forces.  However after the fall the aspect fell out of favour as many Craftworlders felt the Blades obsession with duelling strayed too close to the excess which had brought about the fall, coupled with the loss of their Phoenix Lord, Ríohain-Mór, the Blade of Phantoms, saw the shrines rapid decline.

The Weeping Blades will be my armies counts as Incubi, I always liked the duality of the Incubi as a "dark" aspect, in my mind it tied nicely into the ying and yang symbolism that shows up a lot in the Eldar.  It was important that I justified, in my mind at least, why this aspect no longer shows up in 40k although, who knows there could be a far flung Craftworld that still has an active shrine, and I will be expanding the background over time, including more background on their lost Phoenix Lord (whcih I've already started writing but I'm not going to spoil yet until I'm ready to build her).  As for the models I originally wanted to go for the classic 3rd Edition Incubi masks but after a couple of failed attempts at grenstuffing a version of it I settled instead on the current Incubi heads.  I wanted to make them fit the craftworld aesthetic which meant the spikey segmented armour of the standard Incubi wasn't going to work, with that in mind models use the body/legs/arms from the Dire Avengers and swords, heads and back fins from the Incubi, making the poses more dynamic on a couple of them worked out well and when I expand the unit to 10 I'll make a few more of them have a bit more motion to help break up the poses (theres only so much you can do with the two handed sword arms). Next job is to get some paint on them. 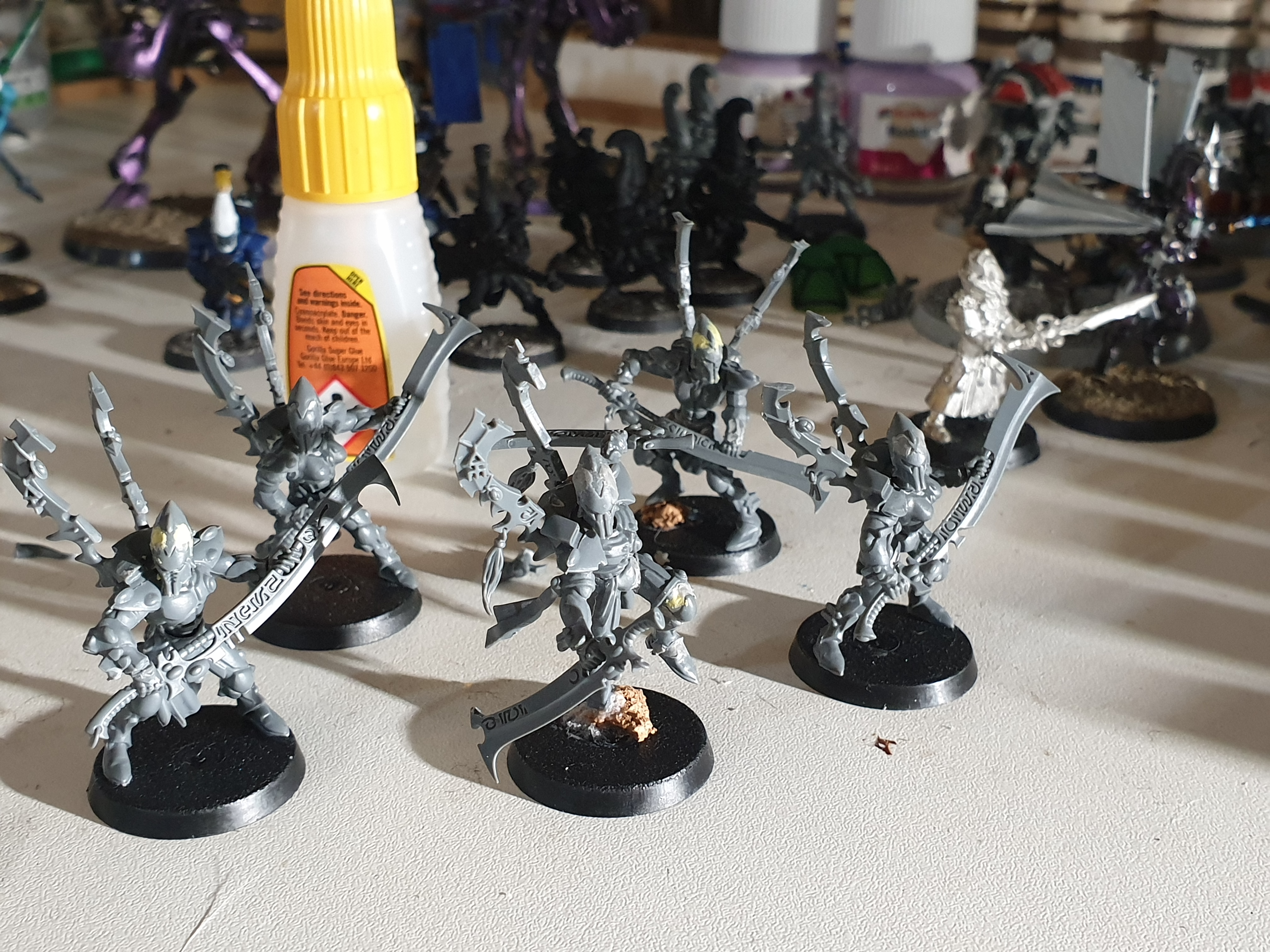 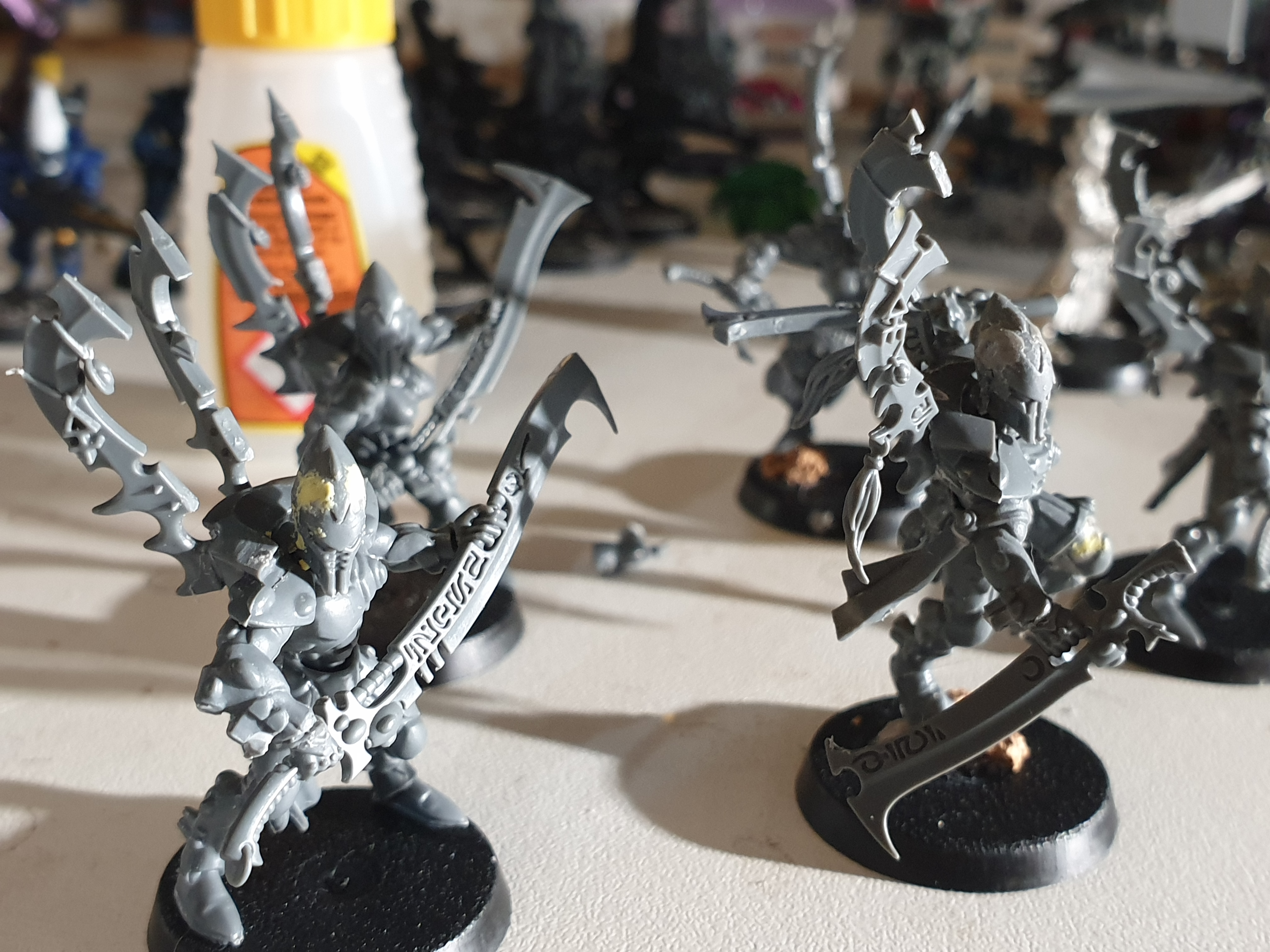 Quick progress update, I've finished the two Wasps, after a bit of back and forth I decided that I was going to do some weathering on the models so they will match my Iron Warriors: It does mean I now need to add weathering powders to the Guardians. 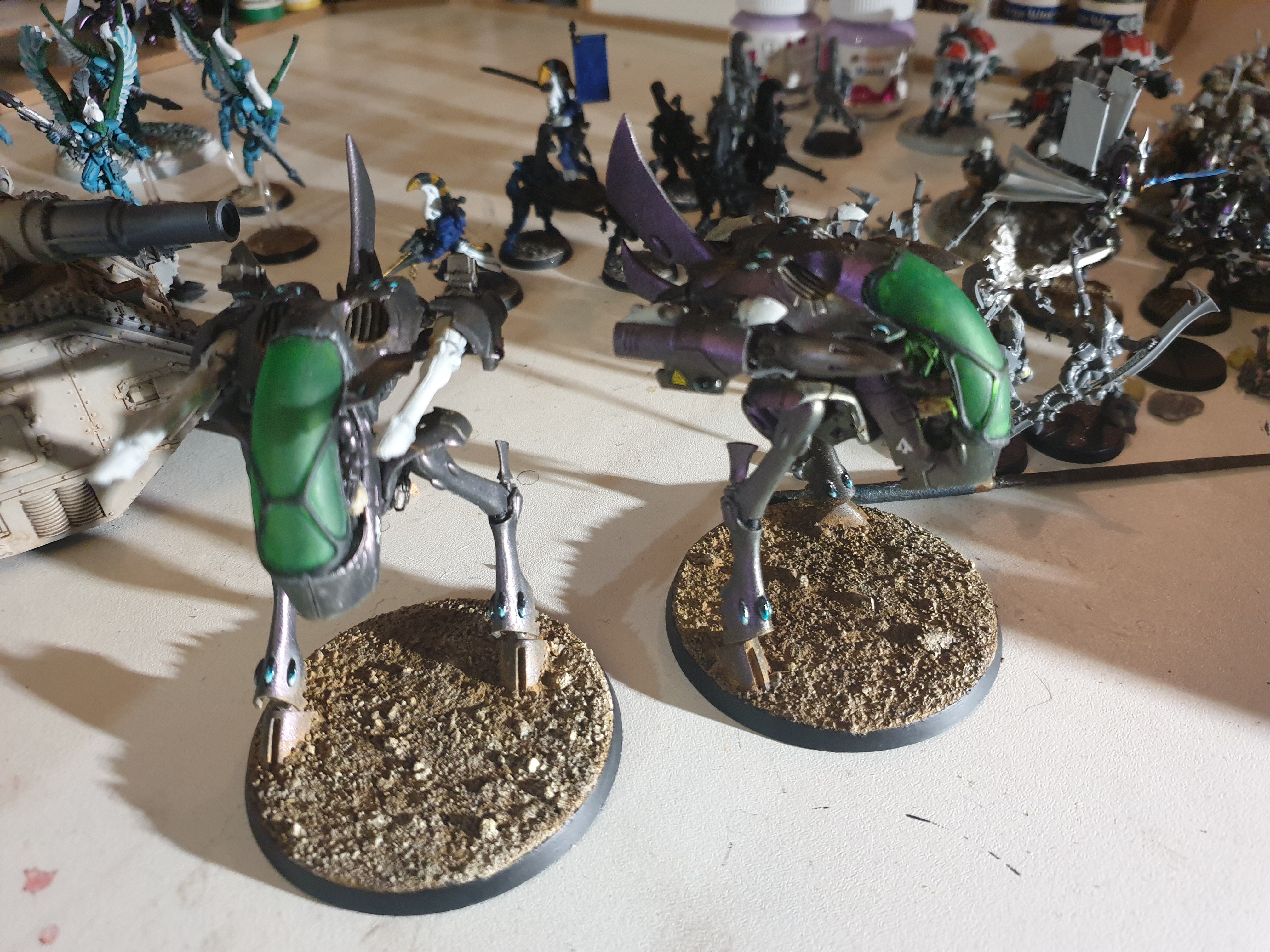 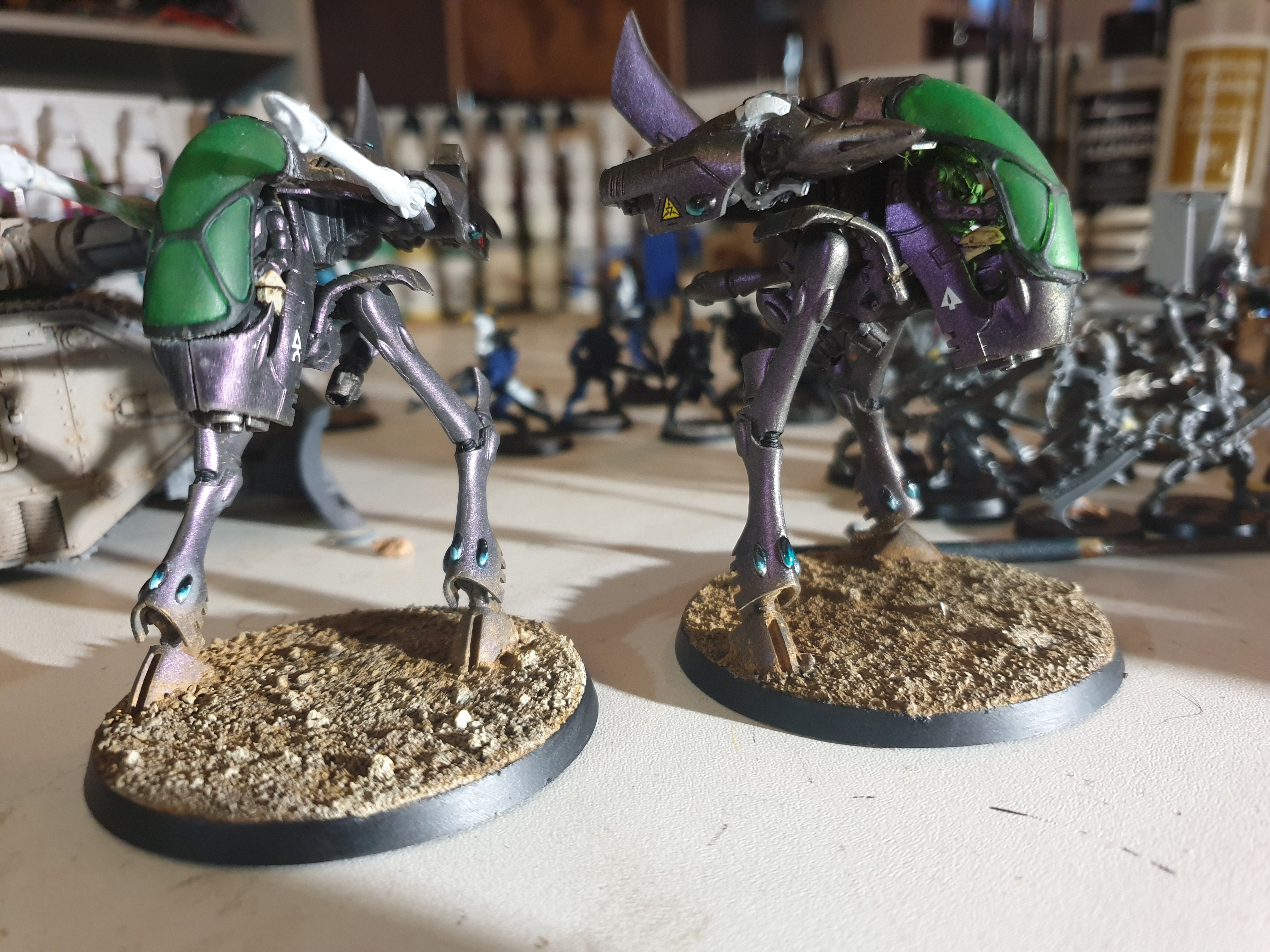 Also a lucky ebay win has furnished me with a Firestorm for the force.  It was already painted so the purple hasn't gone on quite as smoothly but I think it still looks good, who knows, I might decide to strip it later and redo it. 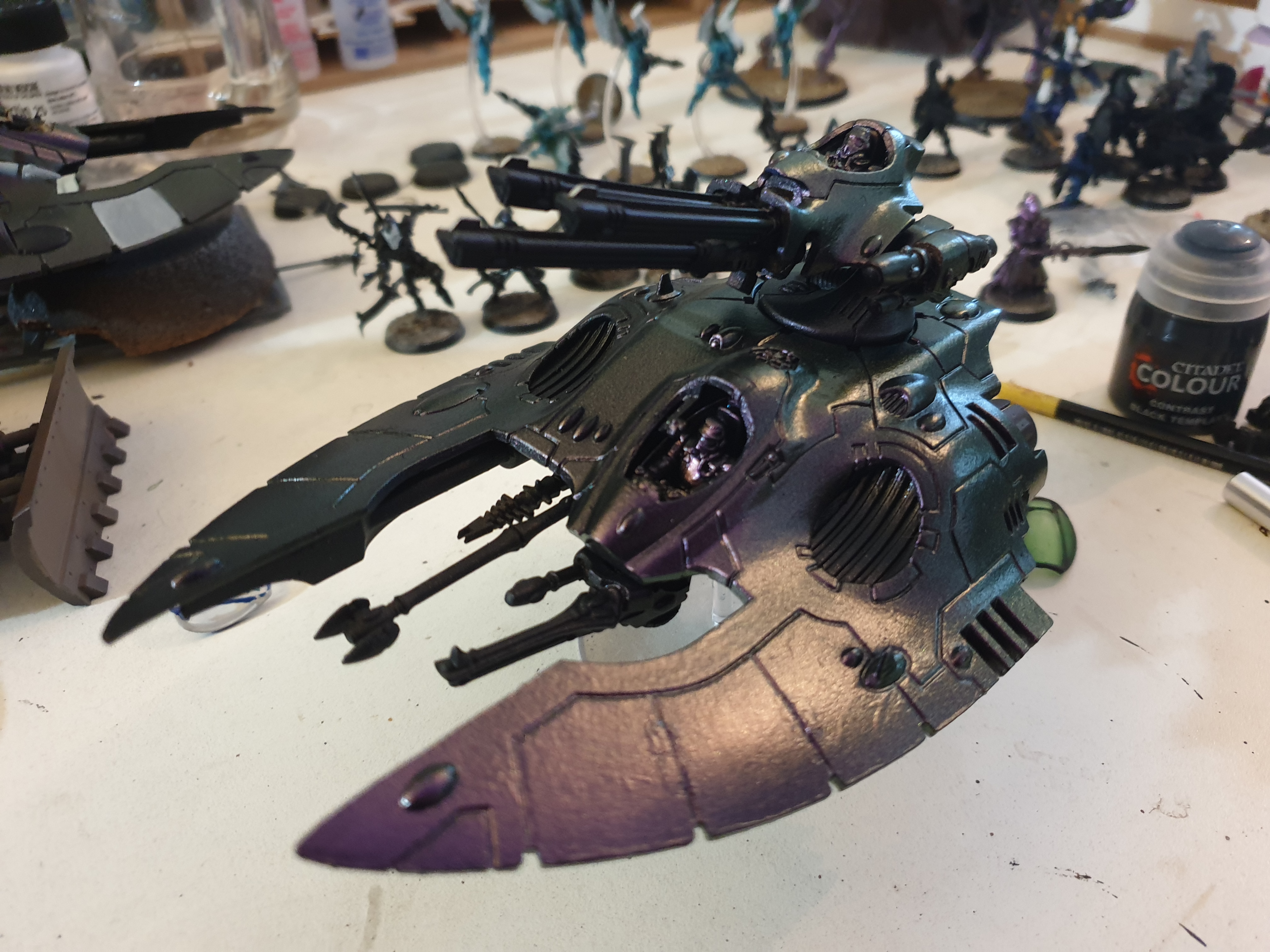 I've got another 10 Guardians and another Falcon to build and then I think I should focus on getting everything painted before I buy any more stuff...ha, like that will happen, I can dream though.

Also tagged with one or more of these keywords: Eldar