115 replies to this topic

These figurines seem super detailed, way more than the action man/GI-Joe that I was expecting.

What I find amusing, is that forever, the community has complained that marines are too short compared to guardsmen, GW invents Primaris to address this, and now they go and release a Bandai Primaris figure at, what, 1/16, and a guardsman at 1/6

Would love to see an image of the two together.

We would like to thank everyone for all the positive feedback we have been receiving  on this project and for your patience over this past week while waiting for pictures of the Astra Militarum Cadian Officer, it’s been a real pleasure watching the excitement grow. The good news is the wait is finally over and we are pleased to be able to show you the first image. More pictures will be following daily.

We will be launching this figure at midday (noon) UK time on October 2nd 2020 through Kickstarter and priced at £180.00 GBP.
By using Kickstarter this will ensure that you will all have a chance to secure one of these highly detailed 1:6th scale collectable figures.

We will be publishing more information about the Kickstarter project daily so be sure to sign up for our newsletter at www.greenwolfstudios.com to receive details direct to your email should you miss something on our social media.

There is also a community article up too!

It's nice to see they've paid attention to detail in so far as equipment scaling.

It’s so strange to see models you are so used to being in heroic scale in true scale. That las pistol looks tiny.

also makes you realise how little protection that body armour offers, cuts off with the rib cage.

Not a fan of the hat redesign. Far more British Army than Wehrmacht like the original Kopinski art.

I'm not a fan, I've seen better cosplayer armour and proportions to be honest.

Lovely figure, beautiful detailing, and great proportions. Definitely prefer the Kopinski hat and art (something about that era overall), but it's a great figure.

Looks pretty spot on to me...

Edit: In what way do people think this design digresses from Kopinski's, I'm genuinely curious?
I also wouldn't say his original drawing resembles the Wermacht peaked cap particularly. What's so distinctive about them, to me at least, is that they have the band with the service cap device and field cap button and the national emblem above it on the cap's high crown - which Kopinski's design doesn't have. His hat design only has one insignia and a significantly smaller crown - the same as Green Wolf Studios rendition.

I really, really like it. I'll back the Kickstarter probably, but I want to see what the stretch goals are (if any). I wish they'd stop hyping up the fallen Cadia thing, though.

These are stunning. I’m getting one. Will give it to the family to give back to me! Glad they went with a smaller company than hot toys for these as it keeps the price down as little. Still a very very expensive piece but simply stunning. Glad he has a regular army hat and not the comedy high peak we see on commissars.

Also the original doesn't have that daft gap under the armpit and encompasses the entire rib cage - therefore protecting the vital organs.

If the armour was scaled up and the gap in the armpit was shrunk it would be awesome, but sadly it's a "no" from me.

That looks bad imo, and production version always look worse than the prototypes, so definitely not worth the asking price for me.

I looked at the Cadian officer model and the length of the armour looks about right to me. The shoulder pads are a bit more realistic on this model than the 28mm gaming model. The aesthetic of this appeals to me way more than the gamer model. This looks much more realistic and gritty. Very pleased with it

They get this right I can smell a Kreig officer or standard bearer coming after. I was thinking of getting the Princess Leia Endor model from hot toys this year but this has just beat that hands down.

This guy looks boring as all hell, should have gone with a more armored look with the Cadian respirators and a backpack as well as shin guards and thicker gloves, essentially turning it into something that looks like a Veteran without stepping into the Karskin shoes.

++NO PITY.NO REMORSE.NO FEAR++
++Light your way in the darkness with the pyres of burning heretics.++

Damn that thing is absolutely gorgeous, a lot nicer work than i was expecting tbh but waaaay out of my budget. That said i know people who routinely drop hundreds on Star Wars dolls so its aimed more at that crowd

And much as id like a 28mm Cadian rework (To something a bit more like this for example) there is definitely more money in this for GW, aside from some negligible man hours in negotiations and consultations this is costing them next to nothing to get their cut of the profits, licensing is easy money.

When in 1/6 scale I can totally see the WWI and WWII British officer inspiration that I don’t get when looking at the table top models.

If they do a space marine it should definitely be a dark angel. They do some great fabrics on the figures.

After looking at it a bit more, aside from the wrong hat, the total lack of equipment besides a canteen and knife has me really worried the new guard range will be similarly bare and not incorporate the FW respirator kits and assault packs.

Other than the hat, everything seems okay to me for a Imperial Guard Cadian Officer. Some officer models of this type tend to not have a whole lot on them in some cases.


It's right there, mate: 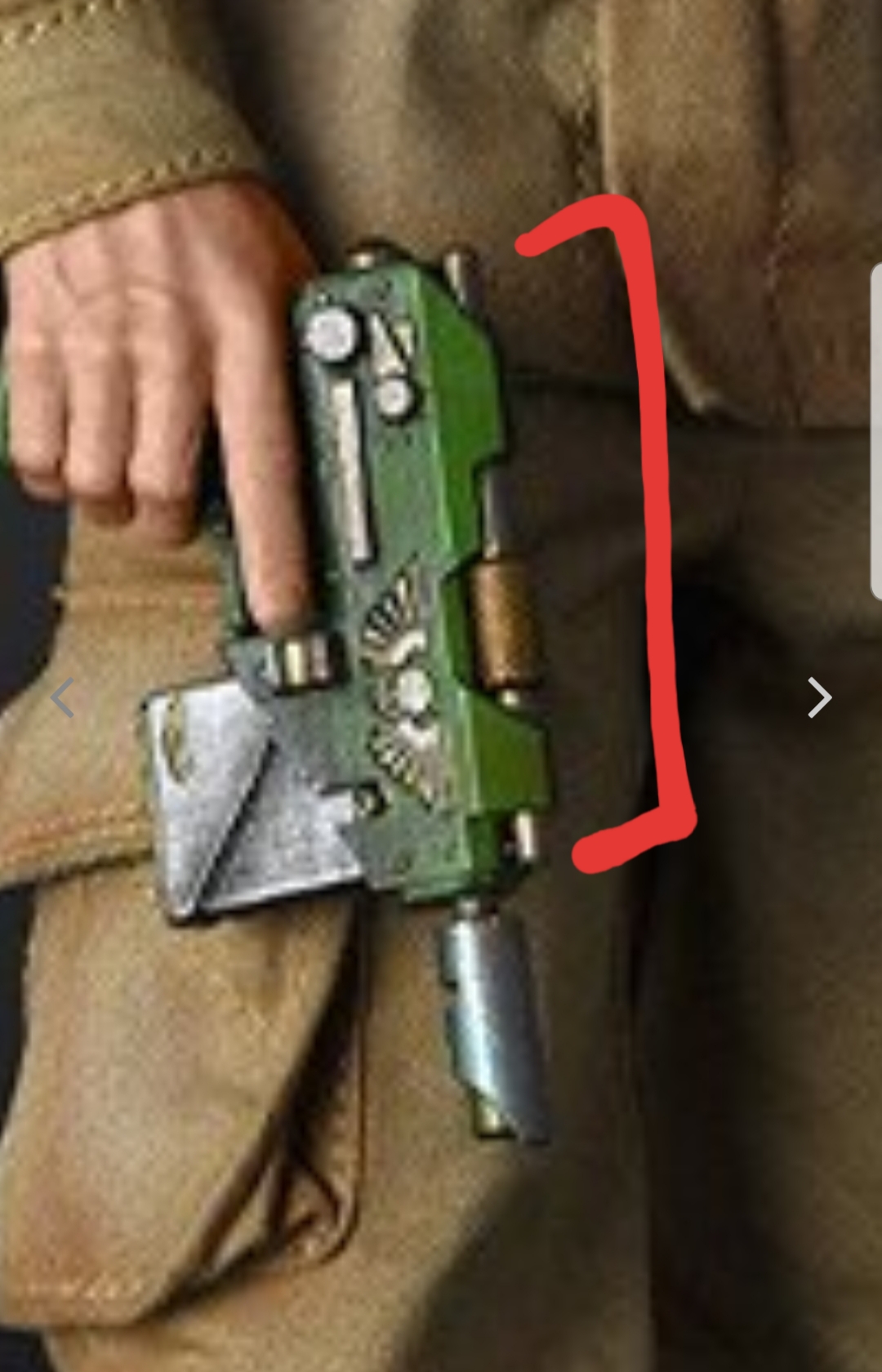 Post link for all the instances in which Reanimation Protocols doesn't activate, but should.

After looking at it a bit more, aside from the wrong hat

Other than the hat, everything seems okay to me for a Imperial Guard Cadian Officer. Some officer models of this type tend to not have a whole lot on them in some cases.

I'm really curious about this hat thing. I feel like I'm being really blind. To me it looks pretty similar to Kolinski's design and seems to be directly modelled on the peaked cap from the 2008 Cadian Command Squad and the Forge World upgrade frame, which is even older.

There is a real array of peaked caps in the Cadian range though between the Baneblade officer (which is what his face is based on), the tank commander, the discontinued lieutenants, Pask, the Hostile Environment Lieutenant and the two Forge World upgrade packs. Maybe we have different designs in mind but I'm struggling to see any big digressions here from Kolinski/Command Squad - apart from being made out of what appears to be leather rather than fabric. I feel I'm missing something and I really wanna know what it is haha.

It's definitely an improvement face wise - I can't believe the state of some of the Guard paint jobs on GW's website.

the total lack of equipment besides a canteen and knife has me really worried the new guard range will be similarly bare and not incorporate the FW respirator kits and assault packs.

I had no idea a new Guard range had been announced/was running rumour rounds - outside of the conjectured new Catachans - have we heard anything more rockcrete?

I wouldn't worry too much though vis this setting design precedents for (potential) new Cadians. I imagine that having more equipment would really run up production costs and pricing, so they probably kept it relatively bare bones to begin with.

Their accessories are £27.50 each so I imagine including all of the equipment from the Forge World upgrade frames would really drive things up. At the minute he resembles something you could pretty put together using Cadian Command Squad sprues (excluding the bionic eye). Might even make a mini based on him tomorrow.

It's right there, mate:

Oh! No :cuss? I never knew that was an optic. Thank you! Wow. 25+ years in and you learn something new.
Wait. Optic or sighting laser? Thoughts?

Also tagged with one or more of these keywords: Astra Militarum, Cadia, action figures