I am working on my Crimson Fists army and have a squad that I am trying to apply the Crimson Fist Decal as the chapter badge on the left side.  i am using 4th/5th marines and decals.  I am using the Decal turorial that I found here from Winterdyne, so I am trying to use his methods.

As everyone is well aware, Crimson Fists decals are circular decals and are rather difficult to apply.  I count at least a few instances where the decal has wrinkled and "ridged up."  I think that I also have one that folded inward sightly as I was applying.  I have gone over these decals a few times with micro sol and I am trying to cut into the ridge lines.  Is there any thing else that I need to do?  Do I need to prep these kind of decals differently?  I was thinking that pre-cutting the decal, but I am not sure that is such a good idea.

Any one have any bright ideas?

While I don't do decals myself I have seen that people cut a nick into curved ones from the edge to give it just a little room to expand.  The fear of screwing them up makes me not want to do them

• Slice them while they're still on the sheet, before soaking in water.
• Soft slices with a sharp hobby knife - you want to go through the decal, but not the underlying paper.
• Cut no more than a third of the diameter on each side - basically slice North-South-East-West.
• You might want to make sure the decal soaks a little longer than normal to make sure it floats freely on the paper.
• Be careful the decal doesn't fold at your cuts when applying.

FF -  I know that they are pain, but it is what I picked, and I am terrible at free hand drawing.    My original idea was to take a wedge out of the top of the decal like what you are suggesting.

Thanks a bunch Carlson.  Some good ideas on preparing the decal which I think that I will implement on my next batch.  One of the things that I really don't want to do is to cut into the actual fist itself unless i have to, so I think that I can make the limit of cutting no more than 1/3 of the diameter without any problems.

I noticed on my last batch of 5 that when I made sure that the decal was low on the Shoulder Guard and wrapped around so that the top of the decal is not on the shoulder you get less ridges.  Basically if the top of the circle is at 0 degrees, you have the decal applied from around 60 degrees to 300 degrees and the rest is hanging over the top.  I am wondering if I cut slits at 60 and 300 will work as well or will it mess it up?

Microsol will work, but from my experience, requires at least ten cycles for a round decal.

Just to say I am having this exact same problem with my Pre-heresy World Eaters. I feel your pain. After the fact I use Revell’s Decal Soft. Originally I thought it was useless, but I think jaxom has it - it just takes at least 10 treatments.

The cuts can help a bit, or a cross in the middle in my case, but both are fraught with danger. Overall, a very painful process for a mediocre result for me, because the dark red of the legion symbol isn’t much of a contrast against the blue shoulder.

Example here: managed to get out most of the ridges by pasting low and using Decal Soft.  But I think I transferred fibres from the kitchen roll used to remove excess solution - so it was a fail in a different way.

Edit: sorry for the double-post. Giving you a picture as recompense.

Jaxom - Thank you for the advice.  This last batch, I would make a cut on a ridge, and then apply Microsol, during my iterations when I would apply Microsol.   Should I be cutting every time that I apply Microsol, or just once?  On another note, I also was not specifically applying it under the ridges, just over it.  However, I am sure that some did get in between the decal and the model, but is that something that I should be taking a brush down under the ridge?

LameBeard - I am concerned that the cuts may cause more issues than it solves as well.  It was a technique that I did not want to specifically use.  However, I am cutting all of these decals anyways whether i am doing them before or after.  I would have to say that short of the ridges that I am trying to get rid of, the decal does look nice on my models so I am getting the effect that I want on my models, but marred by the ridges.

What happened so far:  I only put on about half of what Jaxom recommended.  I was more worried that I will burn the decal or something if I applied more Microsol than what I already did.  As this is my guinea pig squad, I am less concerned with the look, and after scraping a few of the ridges out, it looks like battle damage.  Not sure if that is what I want for other marines.  Problem is that while scraping the decal, some of it will stick on the model and not easy to get off, which is the reason why I would rather avoid scraping off the ridges and call it "Battle Damage"

I saw another recommendation on a different forum asked several years ago by someone else that confirms what Carlson was referring to.  But they recommended more like what I was talking about, cut on a 12, 2, 6, 10 O'Clock positions on a circular decal.(I used degrees earlier, but basically the same thing)

My technique is to apply the decal (I use Microset) and try to get it as flat as possible, but don't worry if there are wrinkles. I let it dry and then apply Microsol, with an old stiff brush, from the center of the decal outwards; pushing any bumps towards the edge. I use a gentle touch so I don't un-adhere the decal from the model or rip the decal. I don't try to get it perfectly flat in one go. I let it dry and repeat the process with Microsol as many times as needed until the decal is flat.

I'm not sure what you mean by "burn the decal," but I've not had issues with the solvent damaging the pigmentation.

I'm not sure what you mean by "burn the decal," but I've not had issues with the solvent damaging the pigmentation.

More or less destroying the decal by over applying microsol to the decal.  However that fear is assuaged by your comments so I am not worried about that.  Good pointers, thank you for your help.

Example here: managed to get out most of the ridges by pasting low and using Decal Soft.  But I think I transferred fibres from the kitchen roll used to remove excess solution - so it was a fail in a different way.

Edit: sorry for the double-post. Giving you a picture as recompense.

Two things, Good job on the decal, and a nice paint scheme on your space marines.  I have never seen that before, is it a home made chapter?

Those are world eaters from HH.

I've taken to doing two slices, around at the 2 and 10 on a clock before wetting the decal. Then I use microsol to get it on, try to brush it as flat as I can and then do a couple rounds of microset on it. Works pretty well for me. Even if you mess it up slightly and the nicks are still somewhat visible, it's not even going to be noticeable unless you get very, very close.

I've never had issues with microsol damaging pigment on decals that I've purchased from GW or Forge World. 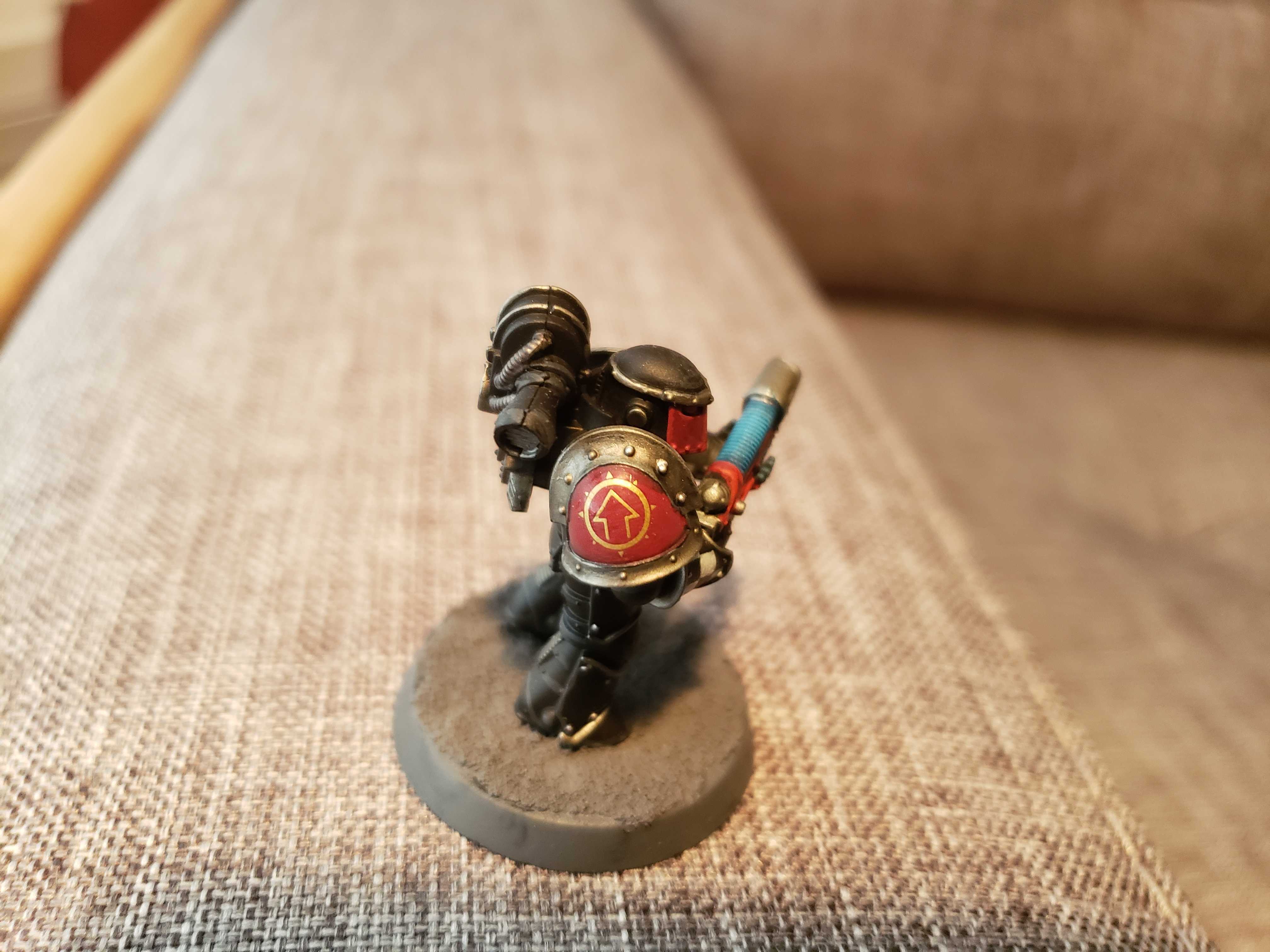 Two things, Good job on the decal, and a nice paint scheme on your space marines. I have never seen that before, is it a home made chapter?


Thanks! I’m just so annoyed on that fluff I can’t shift. I’ll try to show a few more.

@WrathoftheLion beat me to it, it’s pretty classic pre-heresy World Eaters, using my own mix of Vallejo blue and blue/grey.

And @WrathoftheLion that is a decal like a pro. Can’t believe you cut it - it’s seamless.

I think you can see one of the cuts still, it runs through the angular bit of the arrow on the left side. The decal on the other side has a more visible cut. Even then, you need to get close for it to matter, it looks fine.

The main thing is not to worry about it I think. Just go for it and try it out, you can always pass something off as battle damage or whatever. It looks much better even with a cut than it would with bubbles or bunched up or something.

I tried looking at the model blown up and I really don't see any cuts,(maybe a hairline split in the gold) but I do see sort of a discoloration(bubble maybe?) on the left side of the arrow.  This is not criticism, the only way to really see that is with a blown up picture, so I would have no problem with it.  Good work WrathofLion, and I would accept that if my decals looked like that.  Thanks for the advice, the operative technique seems to be to cut at 2:00 and at 10:00 at a minimum, and use a couple of rounds of microsol until it is flat.  Hopefully I will have a few more shoulders to try this out in a week or two.

Back to + GENERAL PCA QUESTIONS +