"Born on Mother Fenris millenia ago.
Raised on Mars for his Great Work.
Fought through half the Imperium.
Shall die for the Future of Mankind,
To be laid to rest on Father Skogr."

Now that the summer heat is calming and construction of the house is far enough that I have SOME Hobbytime now and then, the Painting commences once more.
And along the way I want to flash out the Chapter's Story&History with the help of you fine gentlepeople in the Aett.


Hope you like what you see, even if my painting style is much more basic than yours!


Magic? How do you know of my Bladeguard Rune-Priest already!?


...need to work that chant into some fluff.

"All Greyshields were handed the Standard Issue Equipment of the various patterns the Arch Magos and his Conclave had come up with. And even when it came to more specialized and prized gear, the Iconography was merely simple and clean, yet evocative and reaking of glory. Practical, but effective for morale among allies.
Although there was no distinction between the 9 gene-lines and their heritage. They had come from one and the same schematic, the same molds, the same fabricator lines.

But by the time the Indomitus Crusade had concluded, the Marines had their first scars. Their armors had been repaired multiple times. Personal markings, talismans and trophies had been added. And the first verses of their sagas had been composed.

By the Crusade's End these Armors and Weapons had become the first Relics of a new Era, the first Primaris Equipment to be added to Honorhalls of ancient Chapters and the first that would hang from the walls of Chapter-Fortresses not yet constructed."

Merely the few Base layers mainly done.
This took far longer than I expected, but I took my time to get very thin layers, good coverage and not many spots I need to clean up later.
Also I think he is obviously more intricate, so his sidekicks should be done a bit faster.

...but I have absolutely no idea what I want to do with the Energy Sword - colour/style/technique wise.

Normally I went for Light blue, a dark blue glaze and then some messy white drybrush over it.
But that made everything into a frost-weapon and it alwayslooked kinda lazy.

Need to do some research and stalk some other threads for some good ideas.
If you have any, just throw them here!

The Bladeguard looks most promising.

Born on Mother Fenris millenia ago.
Raised on Mars for his Great Work.
Fought through half the Imperium.
Shall die for the Future of Mankind,
To be laid to rest on Father Skogr.

This BADASS poem earned a like. Is the "Skogr" it refers to a planet? I looked up the term, and found a Wiktionary article on the Old Norse term for "forest".

The Bladeguard looks most promising.

Born on Mother Fenris millenia ago.
Raised on Mars for his Great Work.
Fought through half the Imperium.
Shall die for the Future of Mankind,
To be laid to rest on Father Skogr.

This BADASS poem earned a like. Is the "Skogr" it refers to a planet? I looked up the term, and found a Wiktionary article on the Old Norse term for "forest".


Thank you!
Yes.
It is the Homeworld of 'my' Chapter.
Also it's named 'Forest' because I envision it like Scandinavia/Northern Europe as a planet, but with a Fauna on Steroids.
Also Skogr sounded... rough enough to be fitting for a Space Marine Chapter, hence they became the "Wolves of Skogr".

If you want a further glimpse at Skogr, the Chapter and some Allies in the future, have a read through my Liber ETL contribution from last year:

Some more progress today, added some Contrast to some of the Wraithboned (Hah!) Detail pieces and finished all the purity seals.
To be honest they turned out really nice.
Happy I painted three dozens of those for my Imperial ++××++REDACTED++××++ project. Unintentional practice. 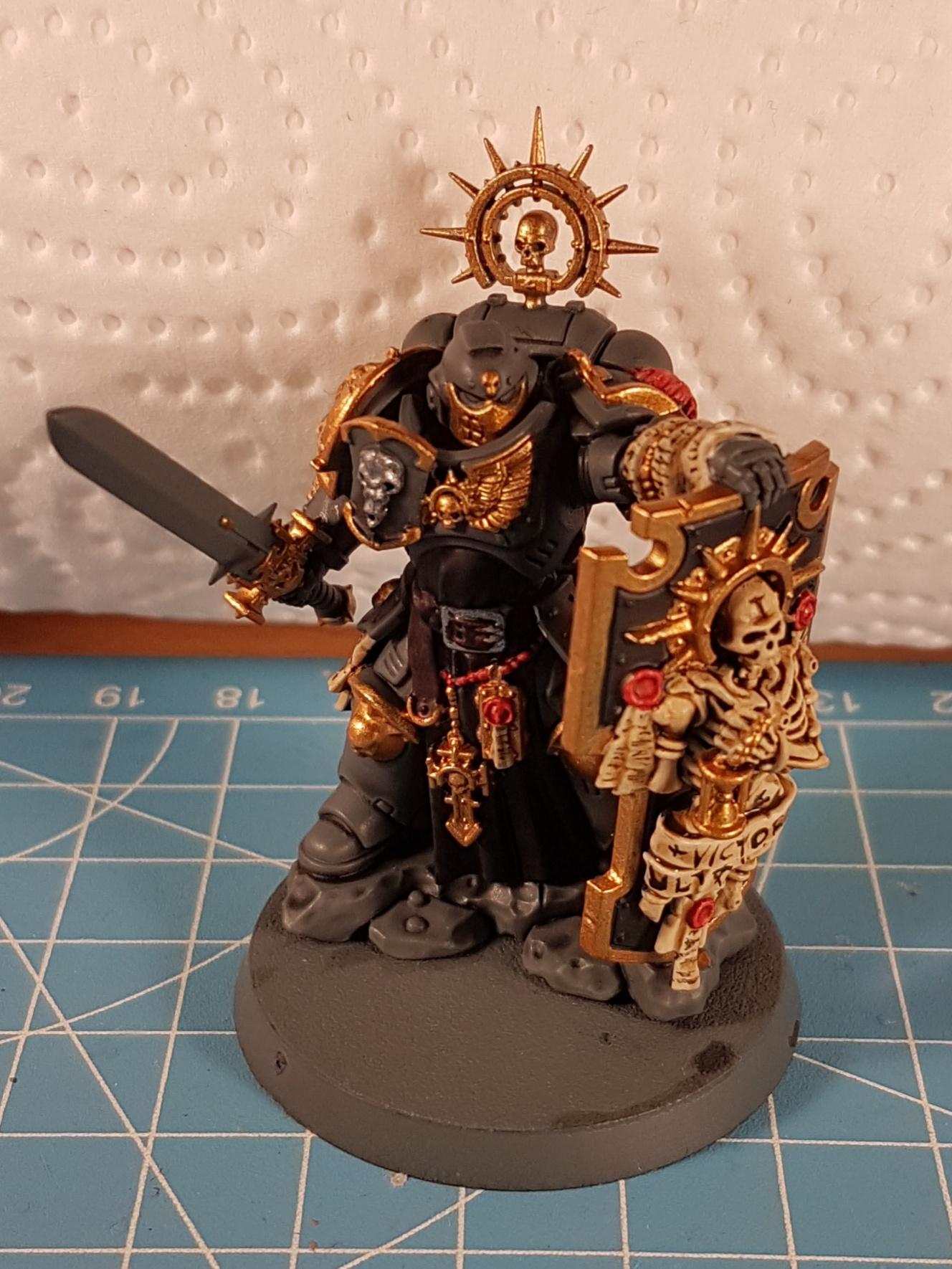 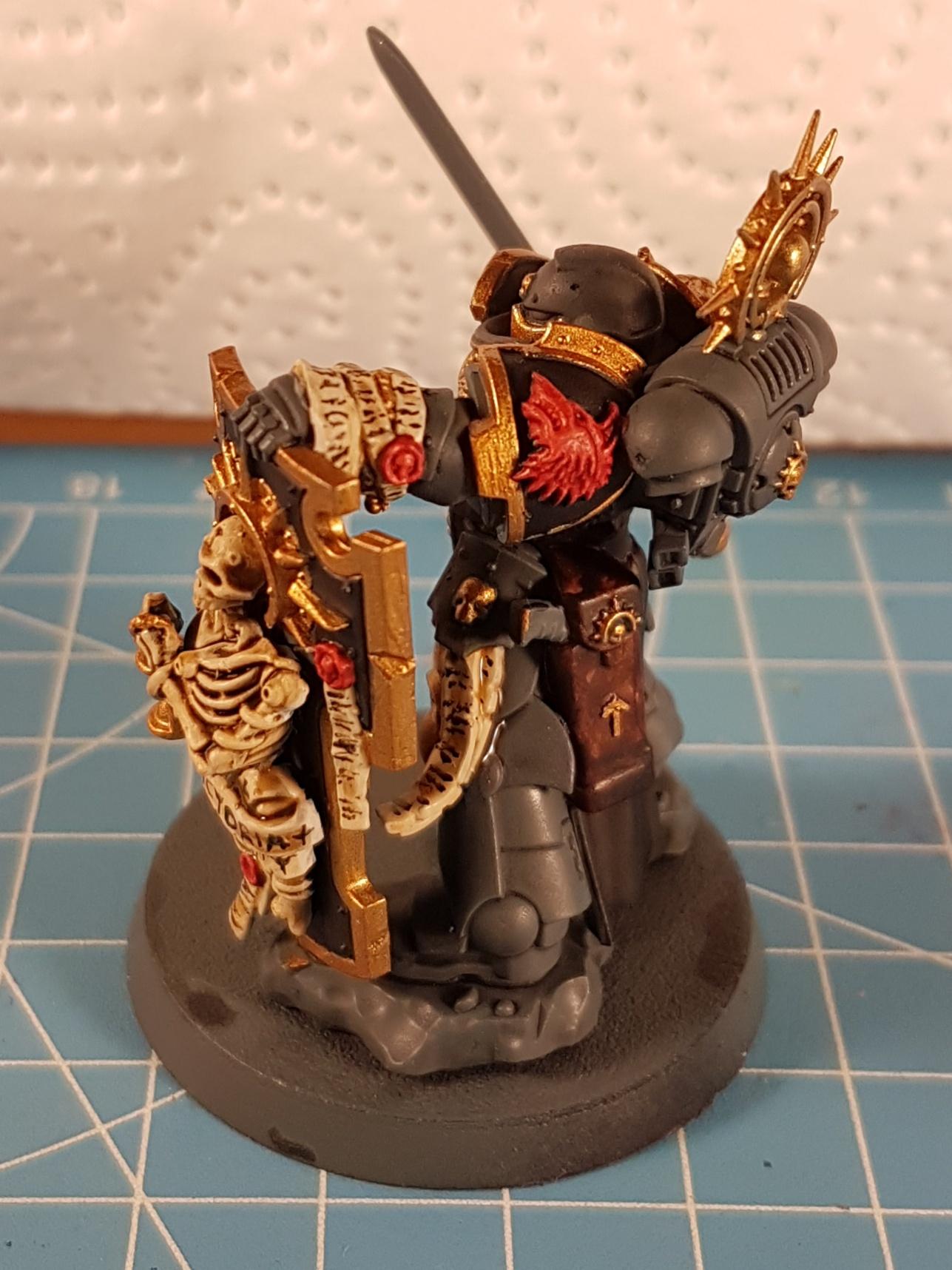 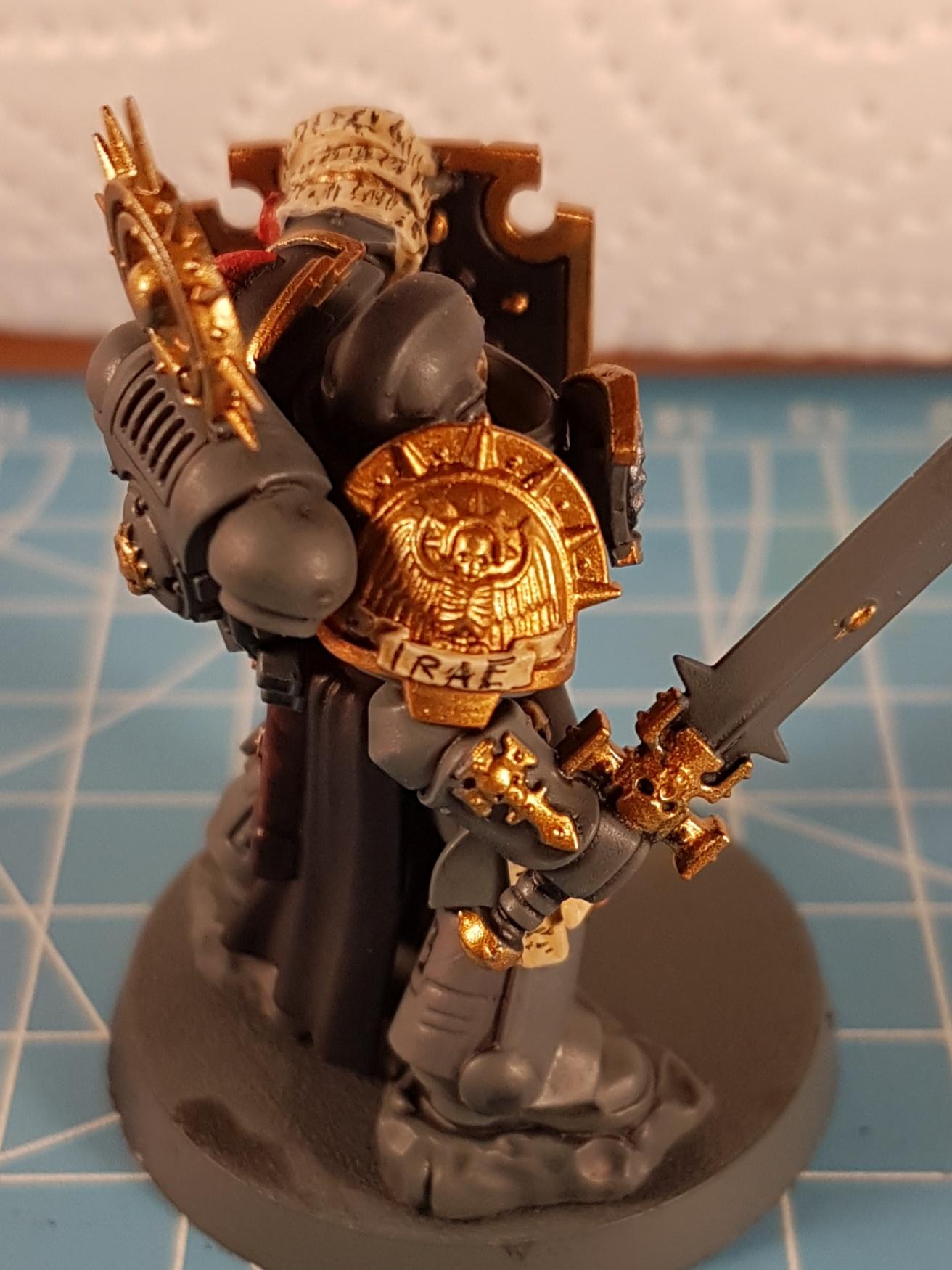 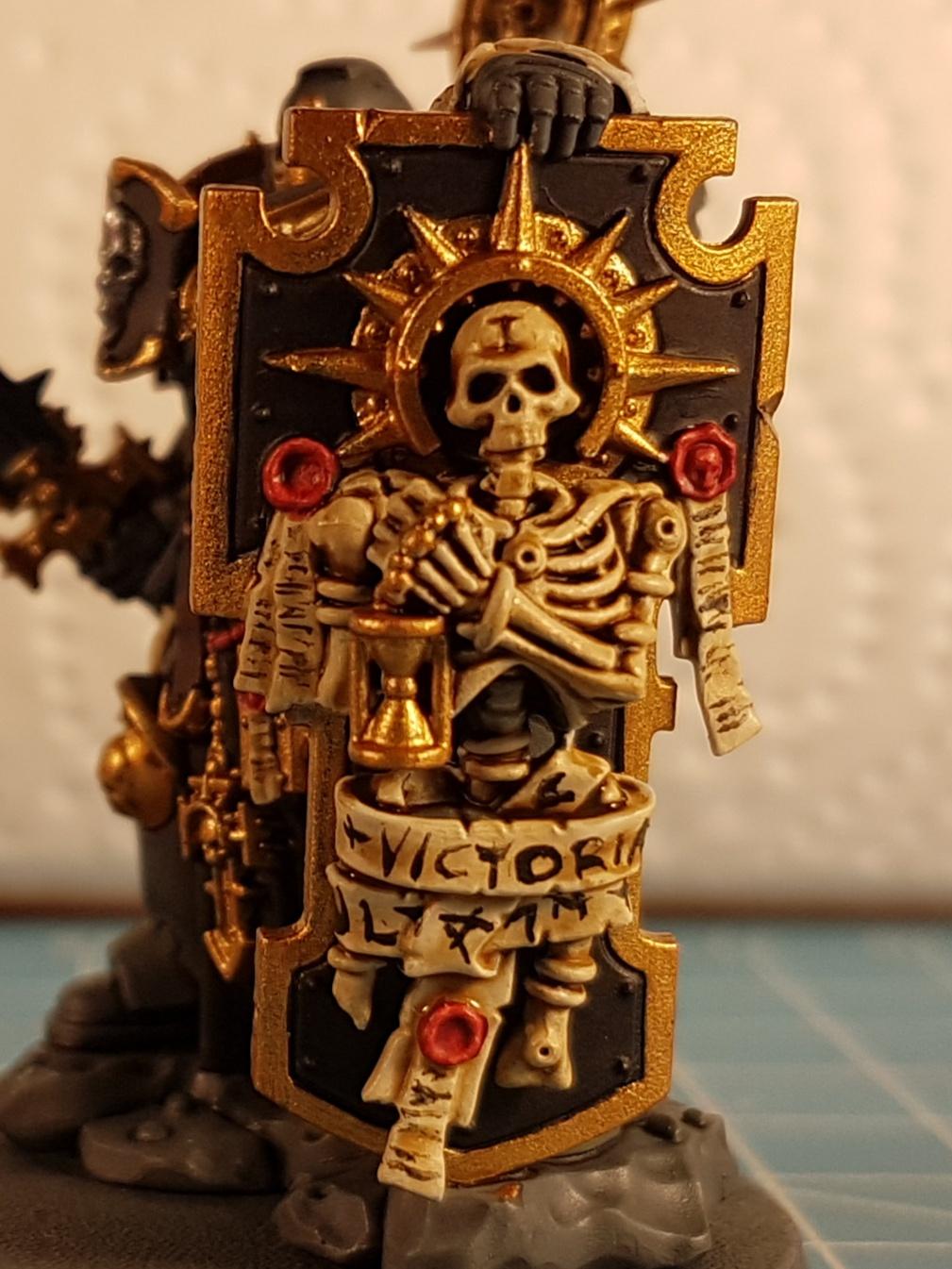 Very nmice, where did you get he wolf emblems on the shoulderpads from?

Very nmice, where did you get he wolf emblems on the shoulderpads from?


Pop goes the Monkey on Shapeways.
Can only recommend. As someone who sucks with freehand and never tried transfers... they are pure gold. 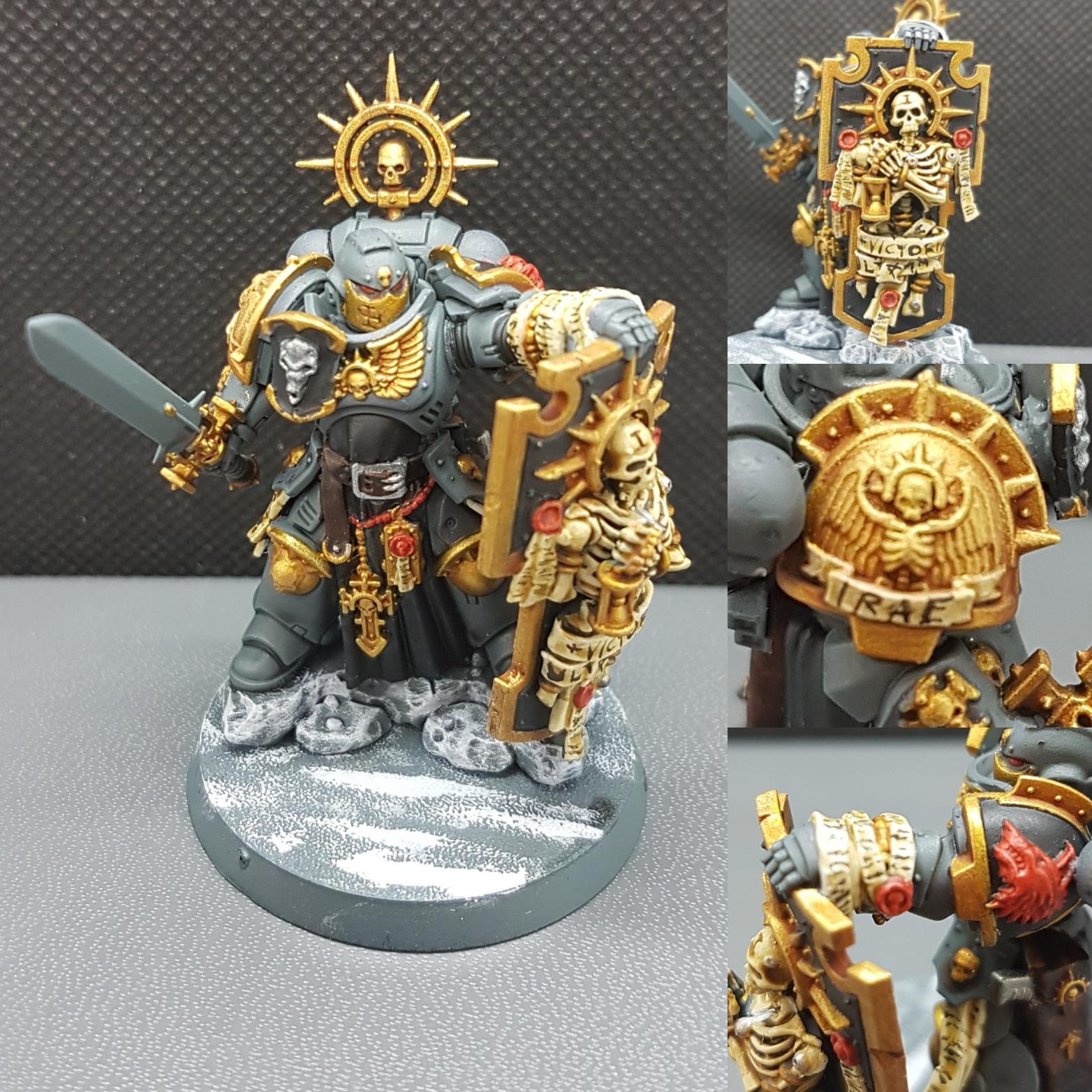 "And as he sat down his shield and gazed over the wartorn plains of Ybrik and up to the gaping Rift in the sky, he knew the Indomitus Crusade was over for them.
They had reached the border of Imperium Sanctum. They had brought freedom and hope back to countless besieged worlds under the Emperor's Light. But Imperium Nihilus was still out of reach, behind that veil... if there even was anything 'behind' the Rift."

So that's how far I got for now.

I will need to test some ideas for my new energy weapon style.
Dark frost!? ...or Obsidian blades?
And basing will be done once all are done...

Obsidian isn't done enough, I say go for it. Call it Fenrisian dragonglass!

to go in conjuction what about a faded red to white darker at the handle and almost white at the tip with some "lightning" efects across ? I bet there aren't much powerweapons red

Borwn/black will also be fitting with the schema

Great job on the Bladeguard Champion!

+1 for Pop Goes the Monkey. I am obsessed with their shoulder icons

Their icons are amazing, but Im not a fan on the weapons or heads from other Shapeways stores.

"...for any conflict might still be resolved peacefully among our clans and tribes, even if there had been brawls with broken bones or debates over broken promises.
But once light shines on a drawn blade, it's inevitable - the night will end early for a looser, while the winner sees the light of a new day. No matter the outcome, both suffer the consequences of their actions."

+++ Parable often told, in various forms, among the Skogran people - Recorded by Em Vargoth, for the Chronicles of the Chapter +++ 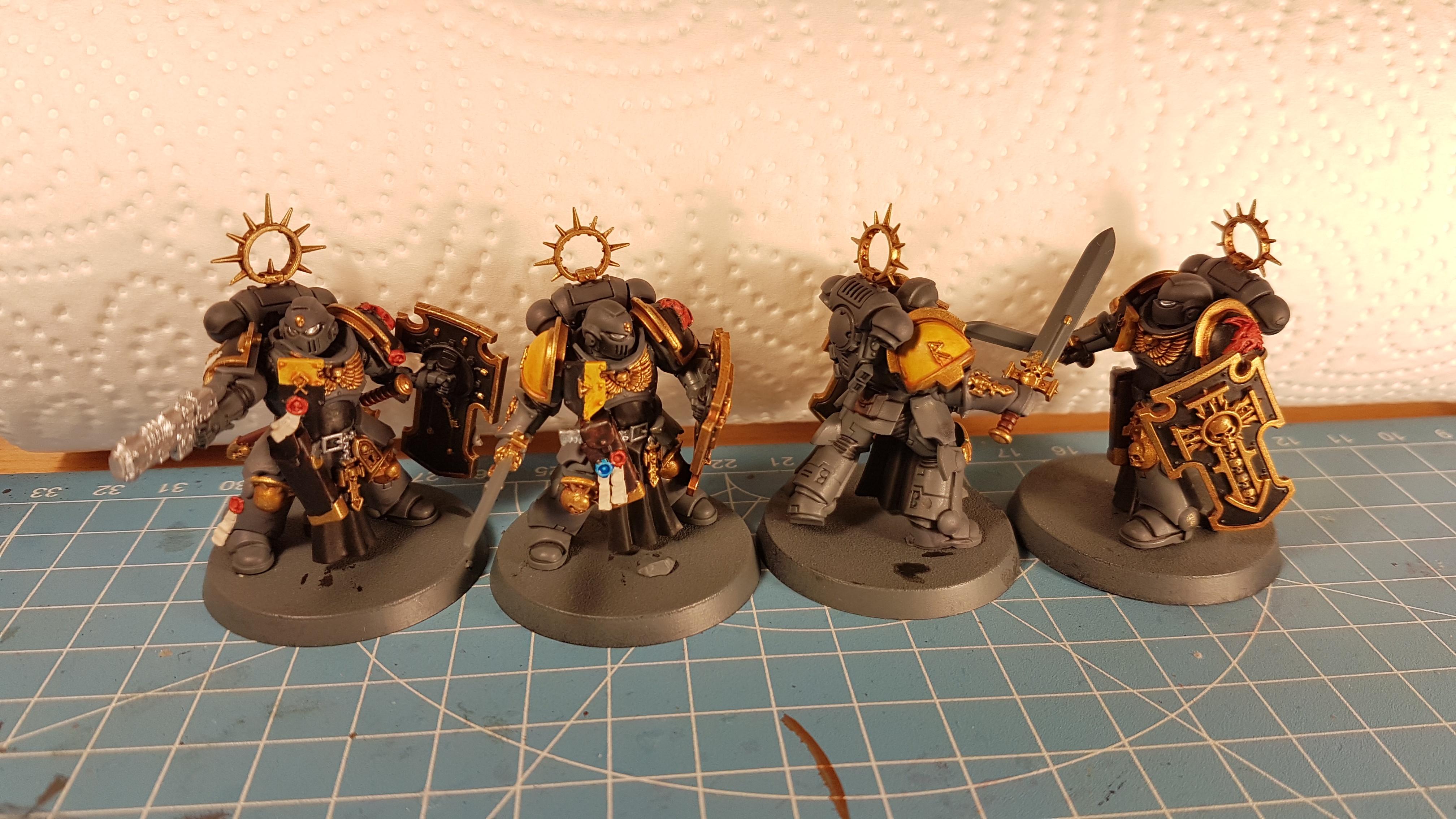 Slowly chipped away at these boys once or twice a week.
Finally had some time to make some progress today.
Small details with Contrast done.
Tilt shields done.
Shoulders 90% done.

...also might have gone to the GW store for a few paints and a Primaris Chaplain on Bike MIGHT have jumped right into my backpack.