My hobby butterfly is in overdrive again and sweeping me up into the world of Mantis Warrior space marines. On the surface I love the colour scheme. But recently I'd seen some inspiring artwork that set me on this path.

@Wolfdawgart on twitter has done a few pictures of Mantis Warriors (amongst other things!) that really struck a cord. They just seemed to suit the phobos armour so well and really made sense of the whole Vanguard Space Marine release for me. Before that I had avoided them and actually Primaris marines altogether.

Here is a pic of his alongside a Marine I made to see if I could do a little homage... 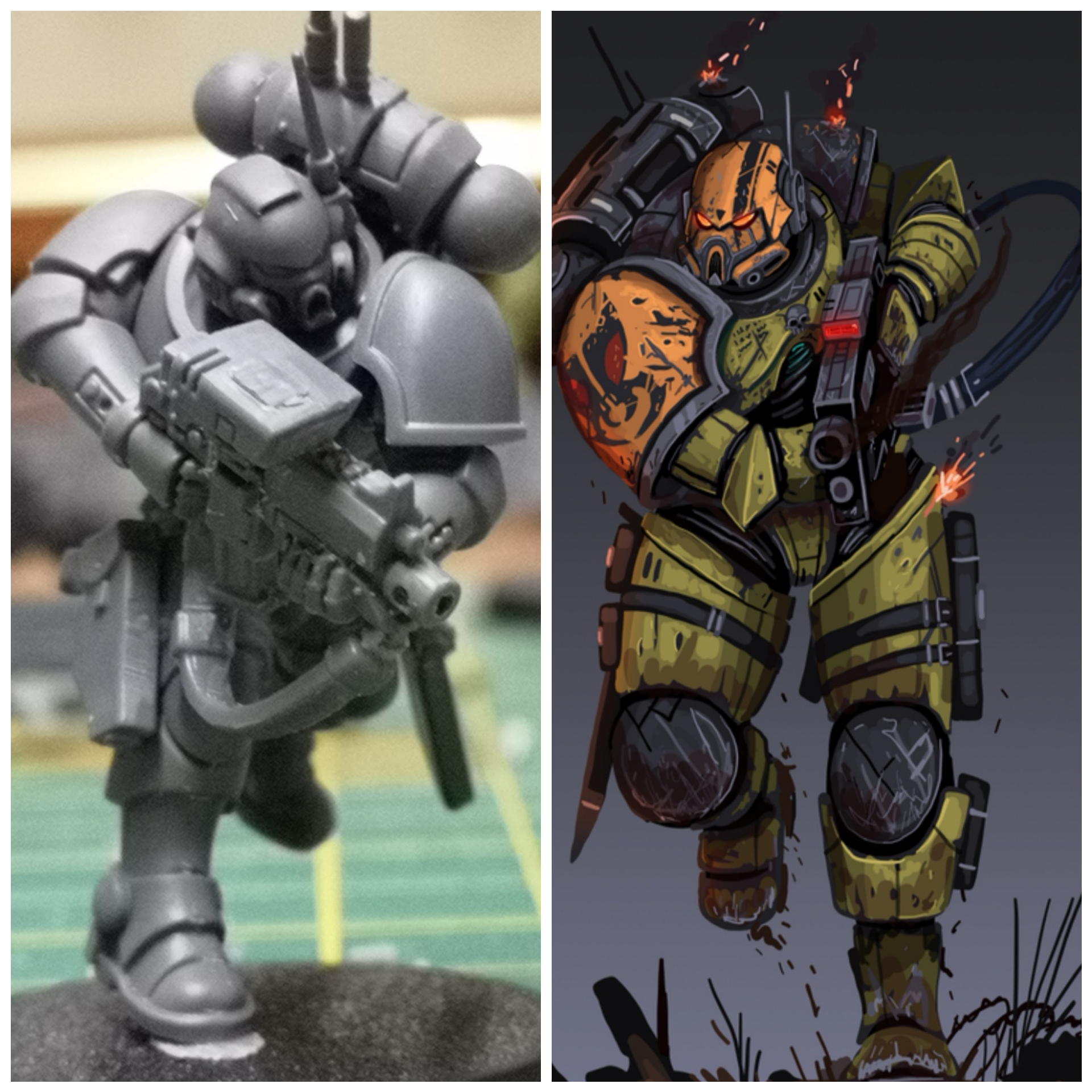 I also built and painted a test model to see what that might be like. I even got the airbrush out of it's decade of stasis. I got a real sense I wanted a jungle setting for these and a real Predator vibe. Maybe some striking scorpion influence, or was that just the colours talking. 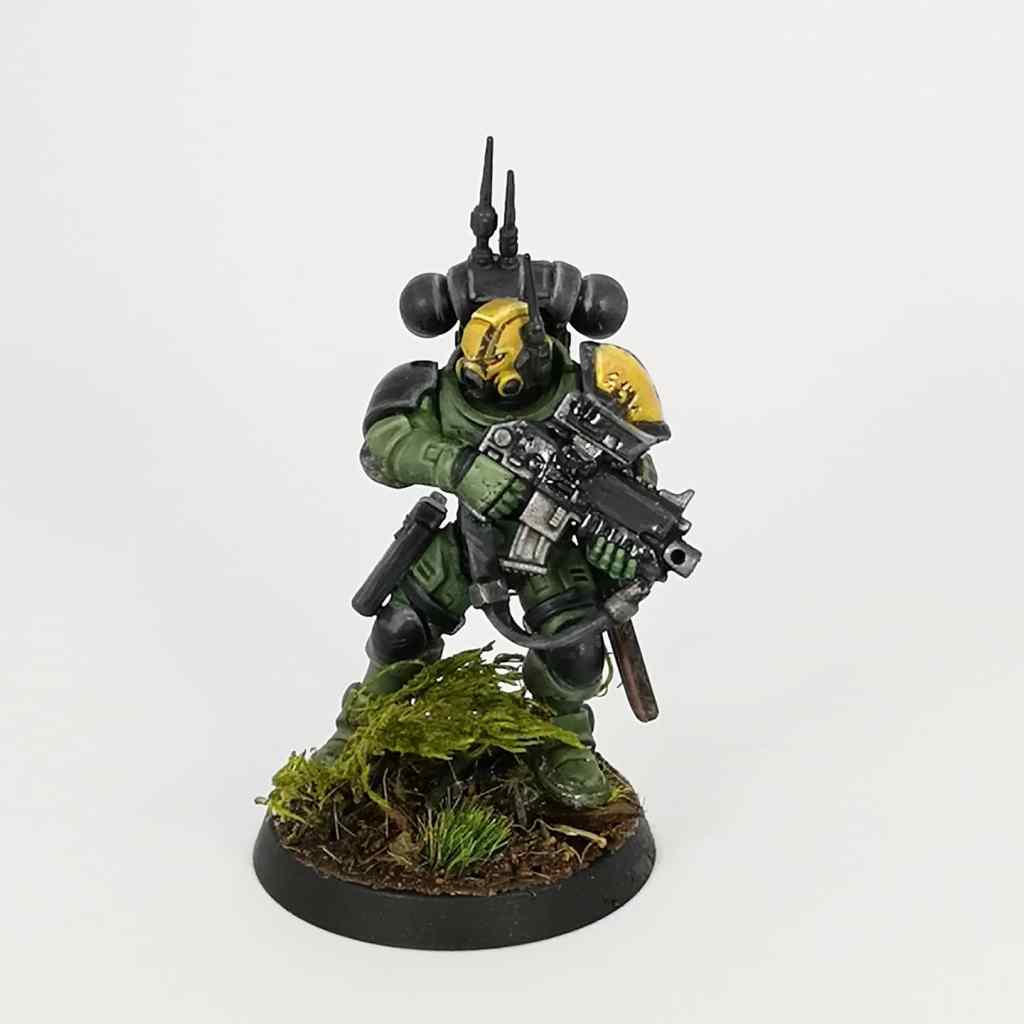 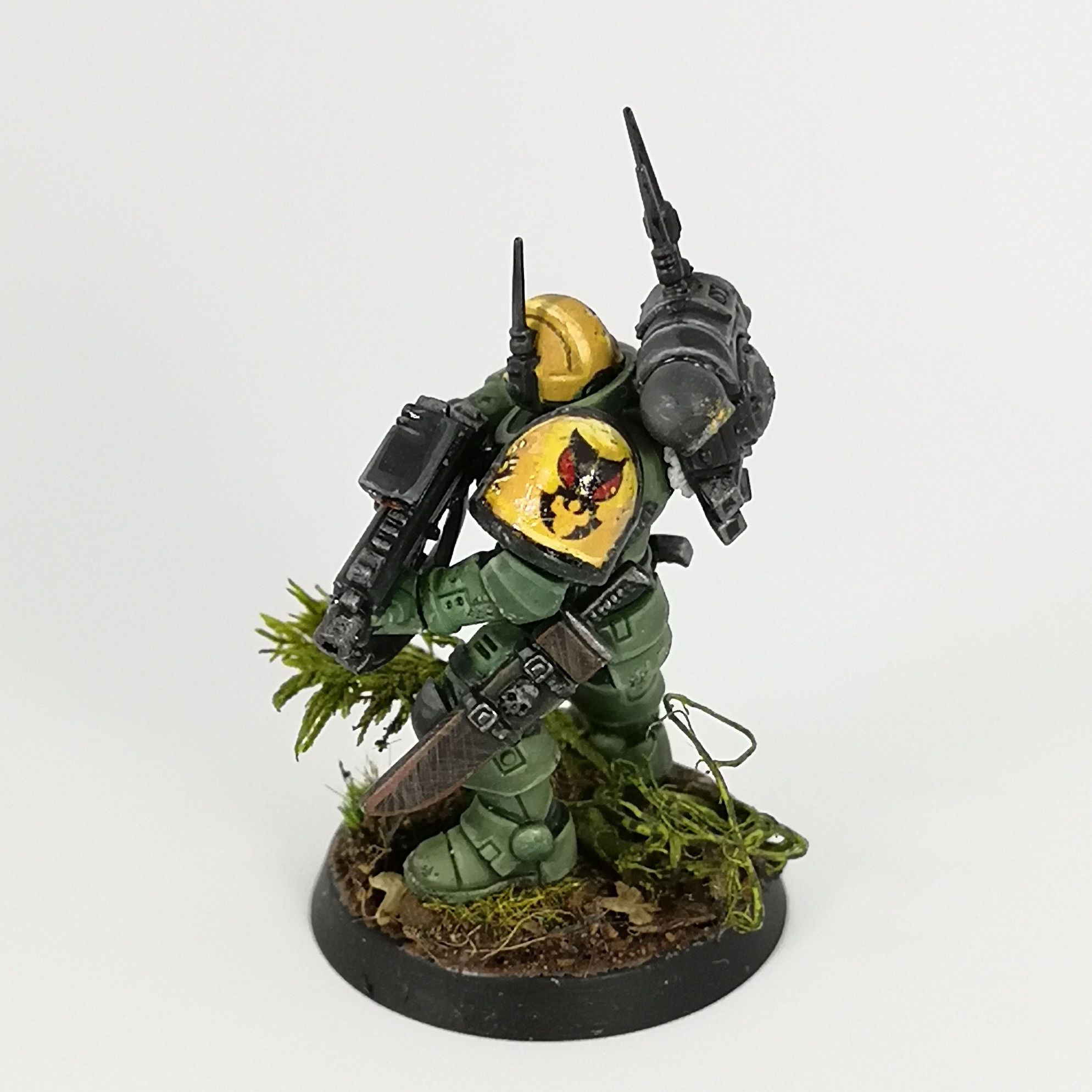 Some of you will have seen this guy already from my other thread. I had a go at the markings on the helmet from the artwork here.

I was then having Ideas for the different types of units I might include in the army. My friends IRL are doing a crusdae for 9th so I'll be trying to get 25PL together.

I've put some models together to test out ideas for various units. It's a lot of test models at this point. 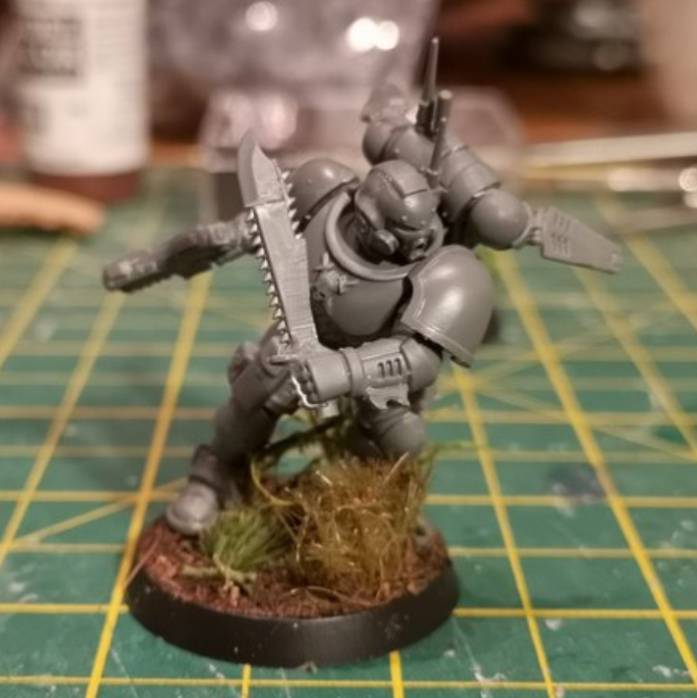 I put together this reiver to try to get that Praying Mantis insect feel. 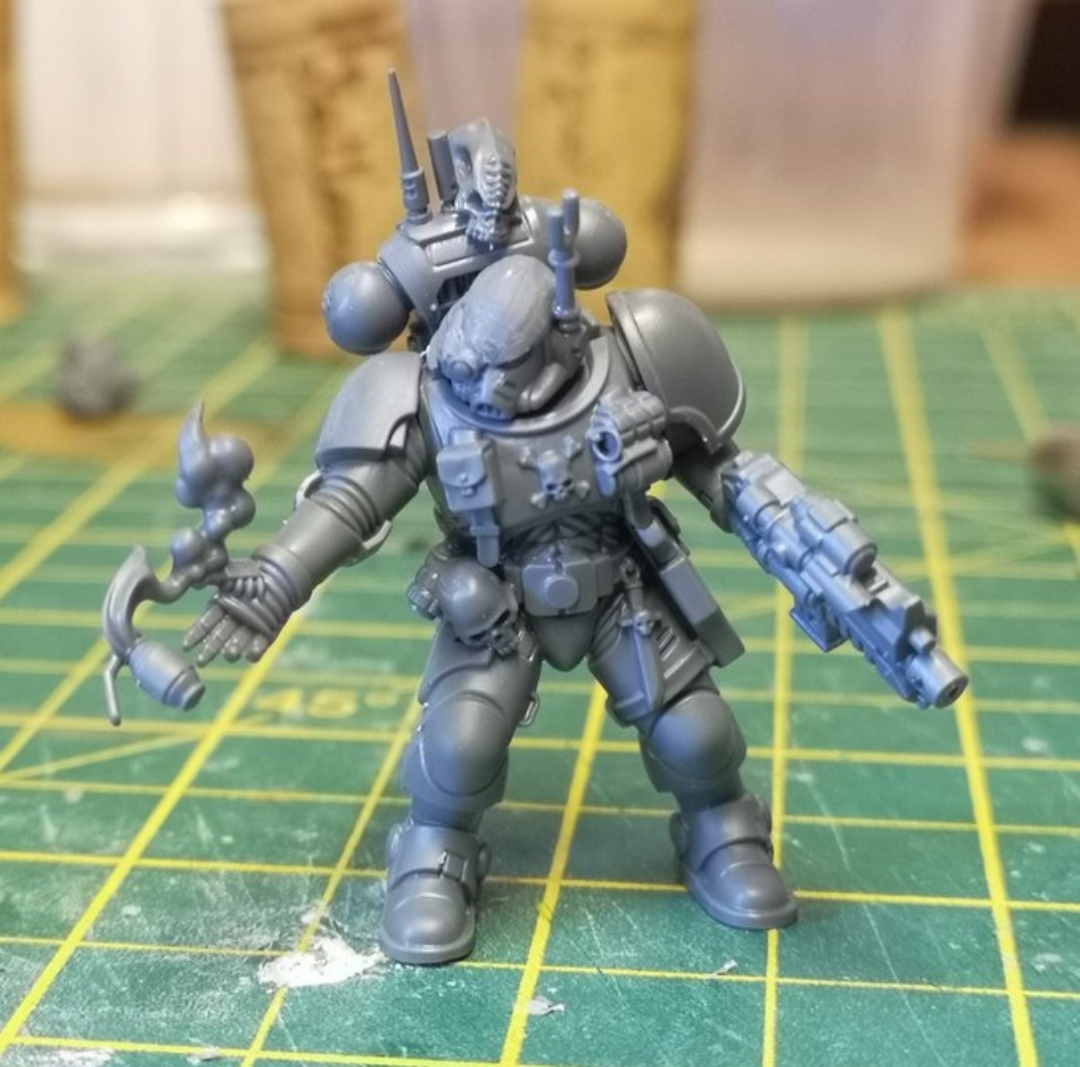 This is another infiltrator, tried to get a bit of predator influence in this one. 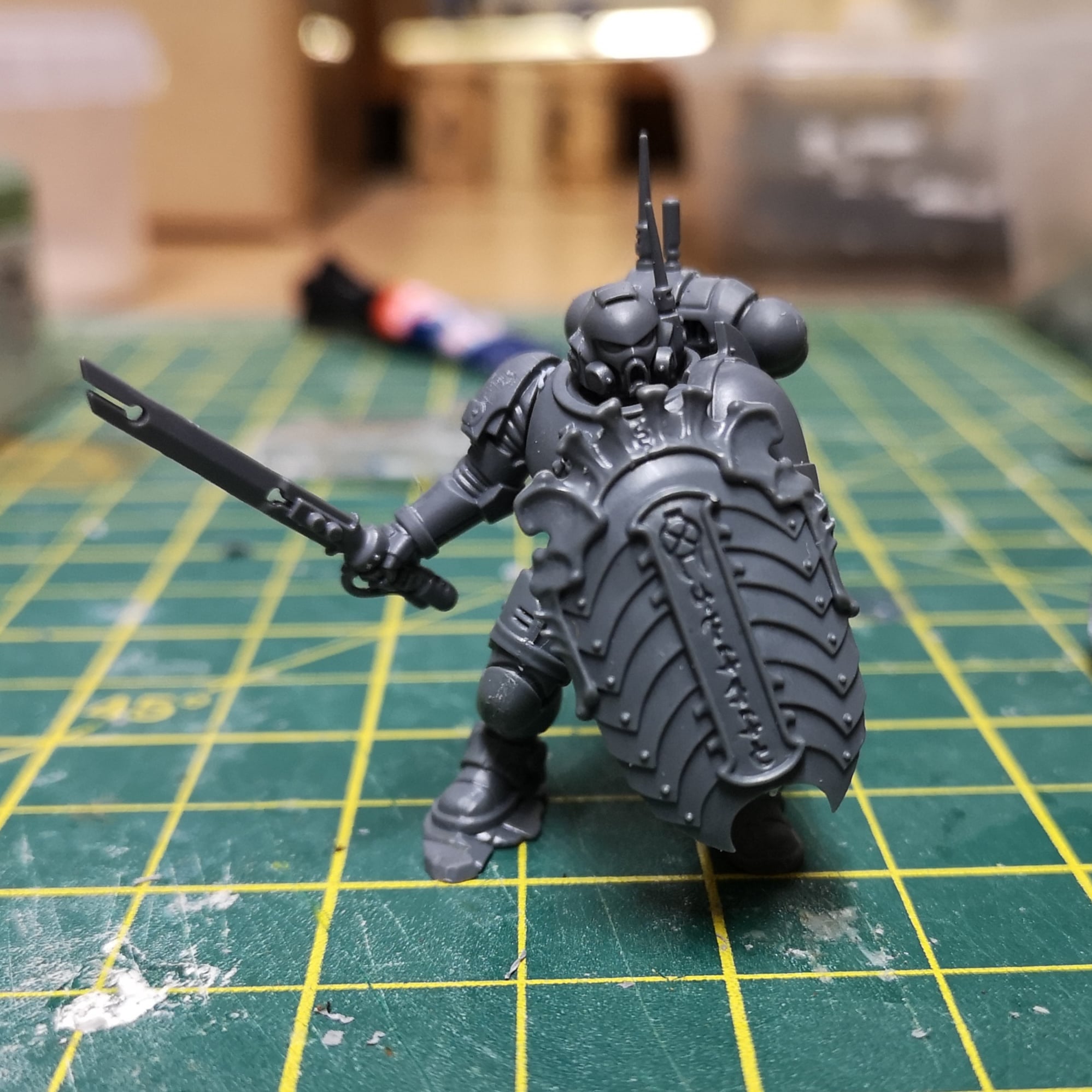 Bladeguard Veteran idea, using Phobos armour and with original Mantis ninja influence but also an insectoid shield in this context.

I was thinking now that I might go full Phobos armour even for units (like the bladeguard that aren't). I then looked at the Gravis statline and had an idea.

I was thinking about the Mantis Warriors being Renegades and decimated by the attacks of the Carcharadons. They would need new recuits and bionics. They are limited/punished to have small numbers. I was thinking a desperation to earn lost honour and re-establish themselves in the imperium. So crossing the Rubicon, Bionics, new recruits from varied sources and even full on robots might be on the cards for them.

So here is an idea for an Eradicator, it's just a head swap currently to get an idea... 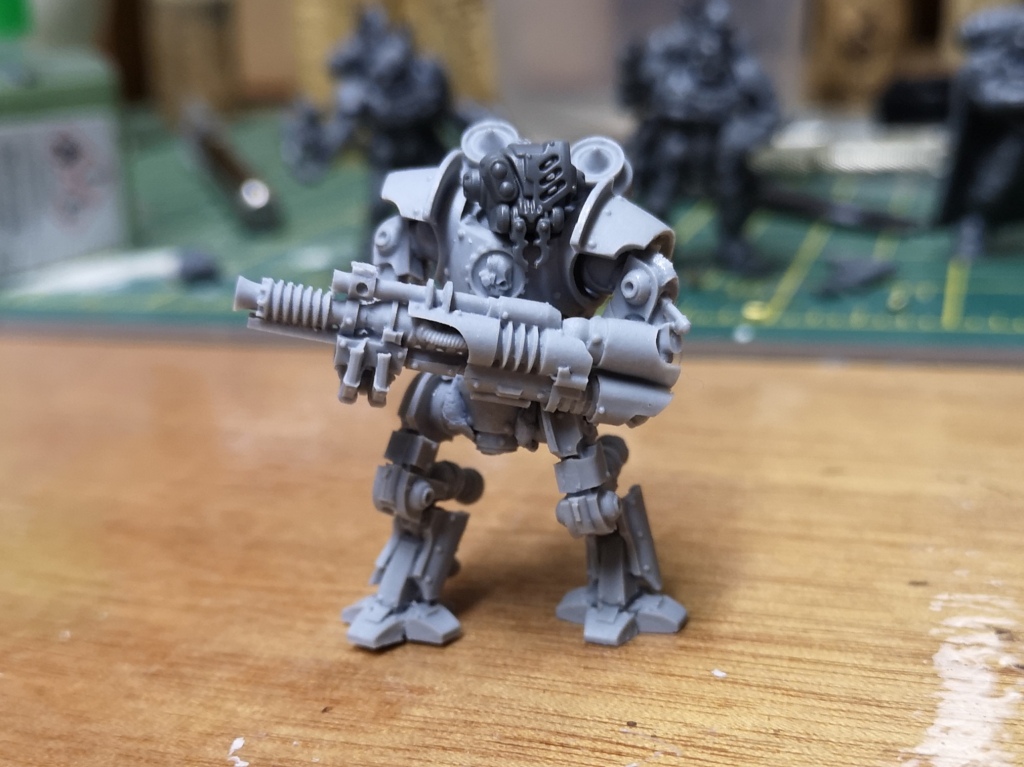 I've since been working on an incursor unit taking the ninja, robot and insect ideas further... 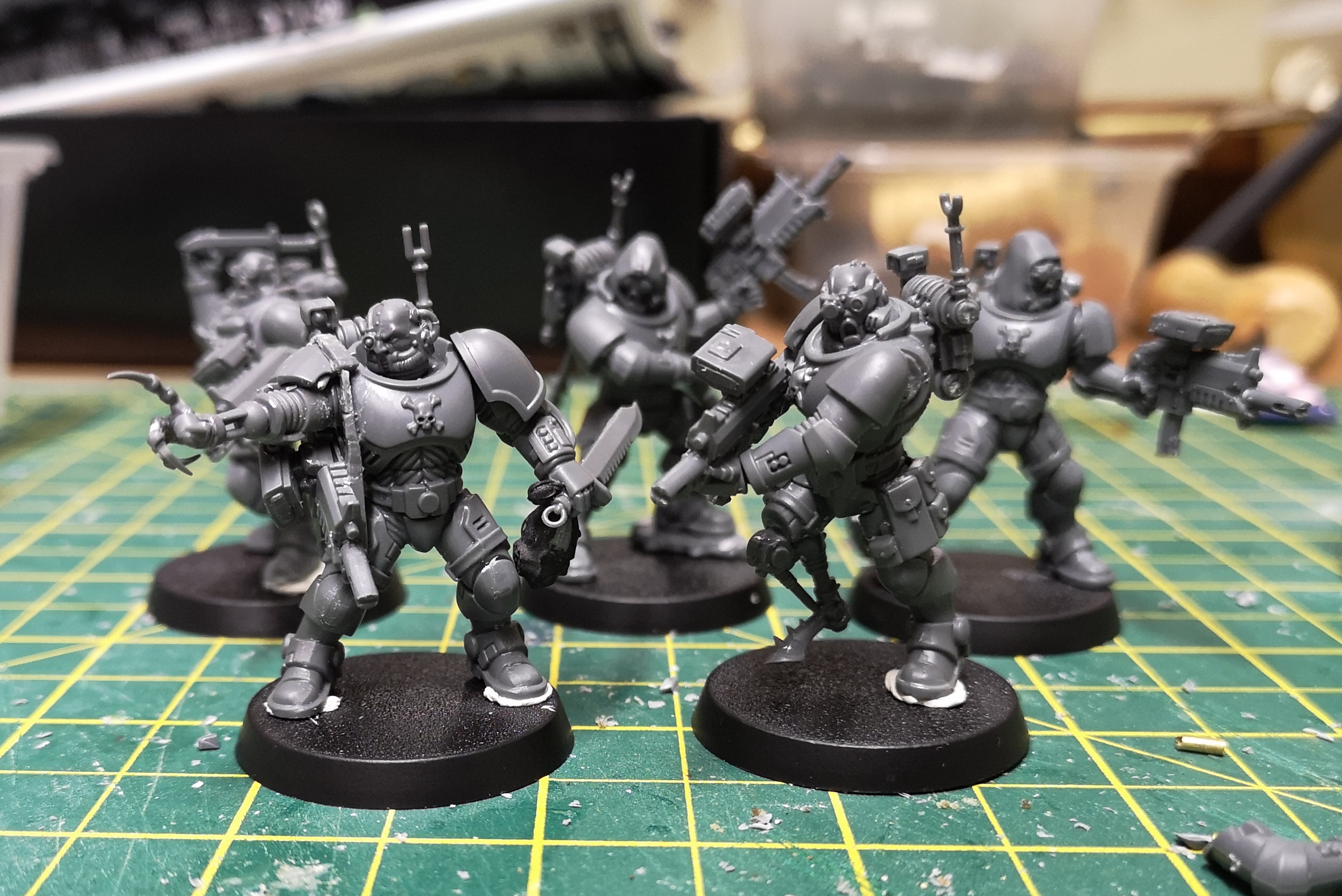 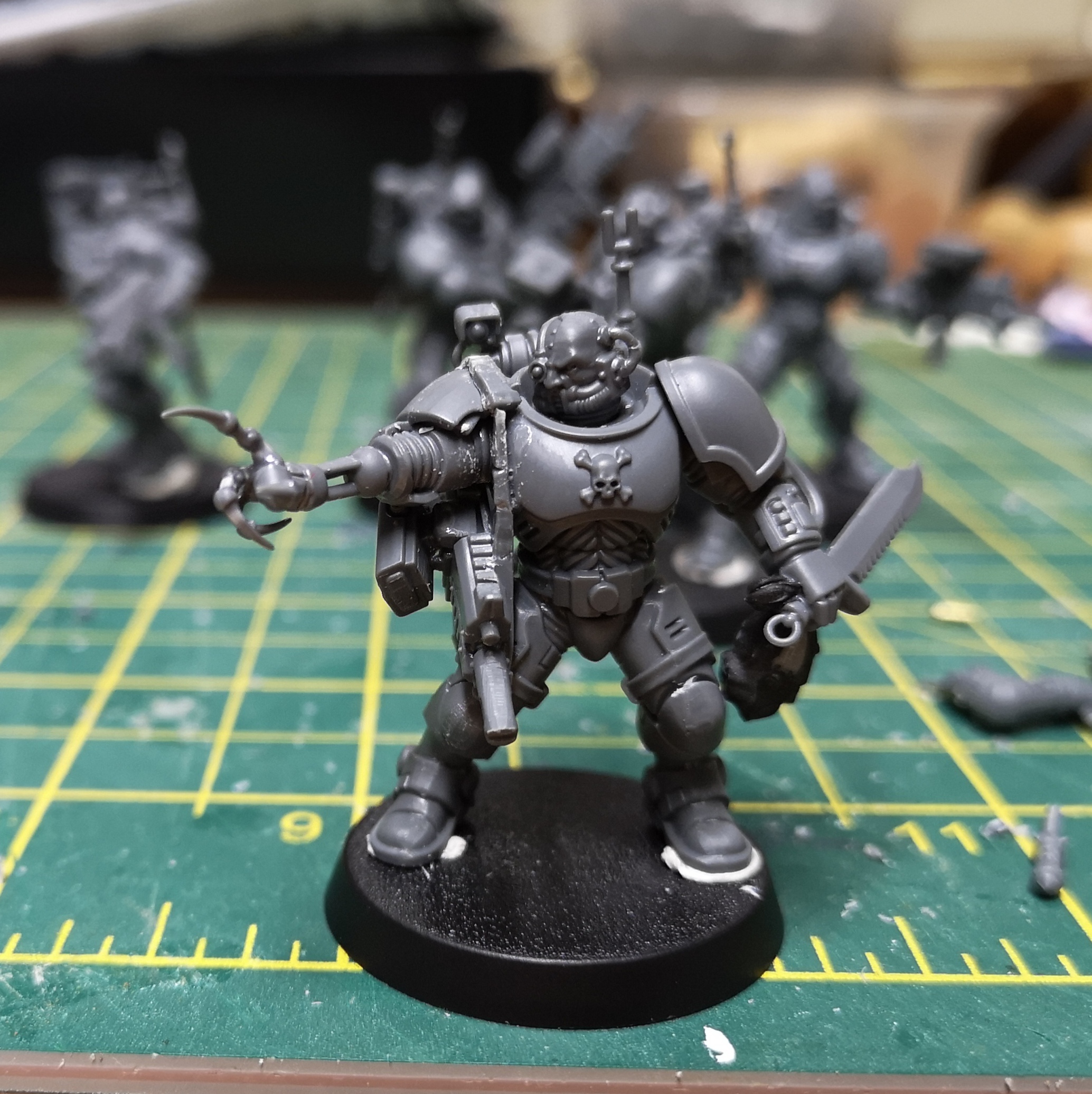 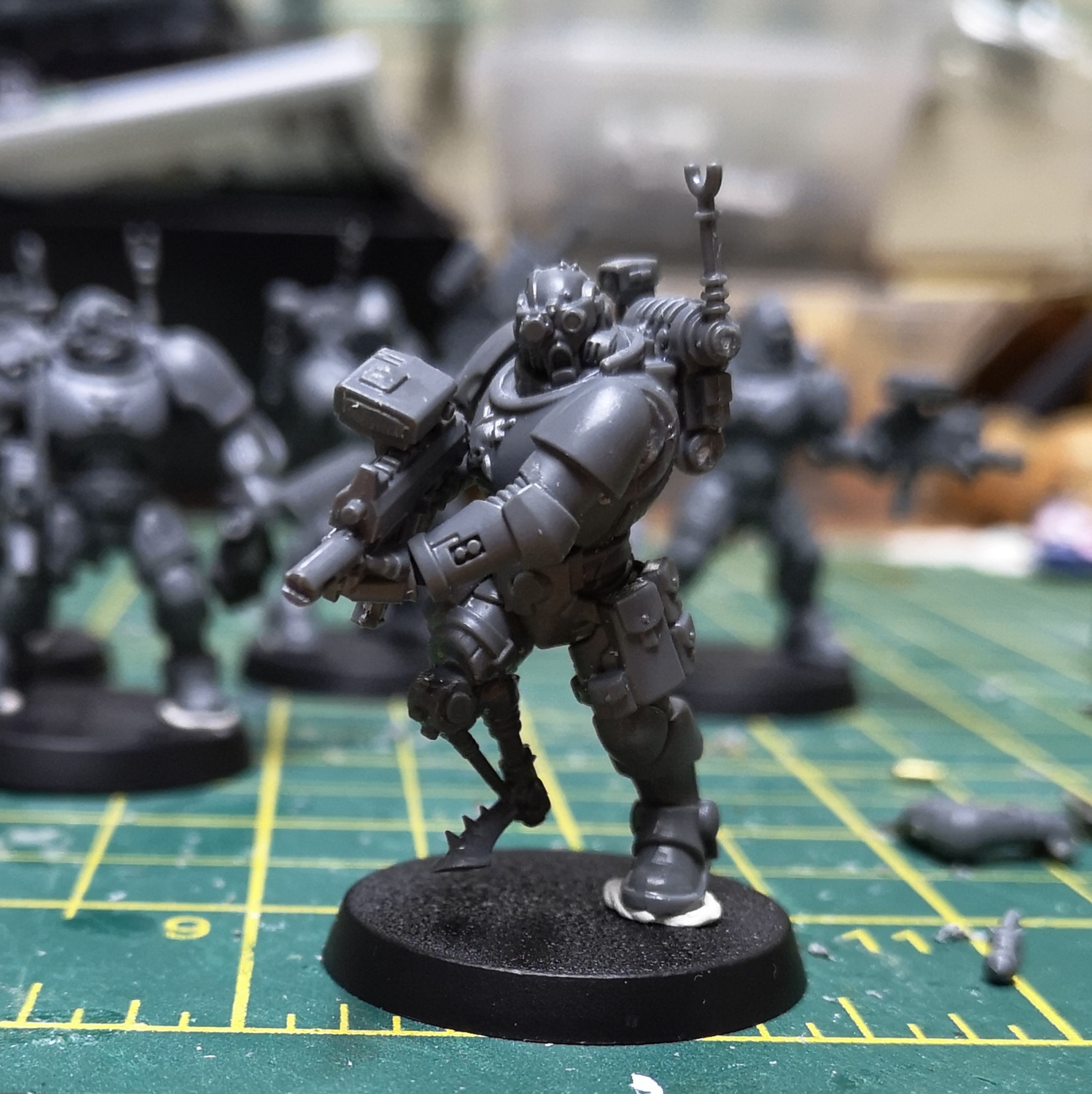 Migs of Iron sleet (Migsula on insta) did AMAZING blood angel scouts using phobos armour and admech backpacks. They were a huge influence on these Incursors!

So it's been a lot of experimenting and fiddly faffing about. But I feel I've got some ideas to work with here and look forward to getting more painted and also getting stuck into some of these ideas for the various units.

Please let me know what you think.

Fantastic stuff, you've some great conversions here. I especially like the Eradicator and the Bladeguard.

Your conversions make the Primaris Mantis Warriors look inhuman, insectile, and creepy as hell- sure to intimidate many potential enemies to desert, instead of facing the Marines in battle. Excellent works.

Seconded what others have said; love the creepy insectoid robot bionic vibe of your Mantis Warriors. Def a cool new fresh take on them. Maybe use some plasti rods and pieces or bits to ‘thicken’ up some of the ad mech limbs, as a little spindly for Primaris. But at same time one leg on marine reminds of a modern carbon fiber running prosthetic; so once paints applied; may look right on too for the effect you’re trying to achieve. Look forward to more!.

Thank you very much. I'm particularly looking forward to figuring out those units and how to do them.

Thank you buddy. I'm really glad that comes across, that is really what I was aiming for.

Thank you. I did consider building bionics from plasticard pipe etc but want to have quite a few in the army so was searching for a faster way. Also looking for a unique look and taking the insect angle as an excuse to have some thin and different bionics.

After a bit more fiddling with them I've finished the build on the Incursor squad and I've just undercoated them. So hopefully get them painted and finished soon. 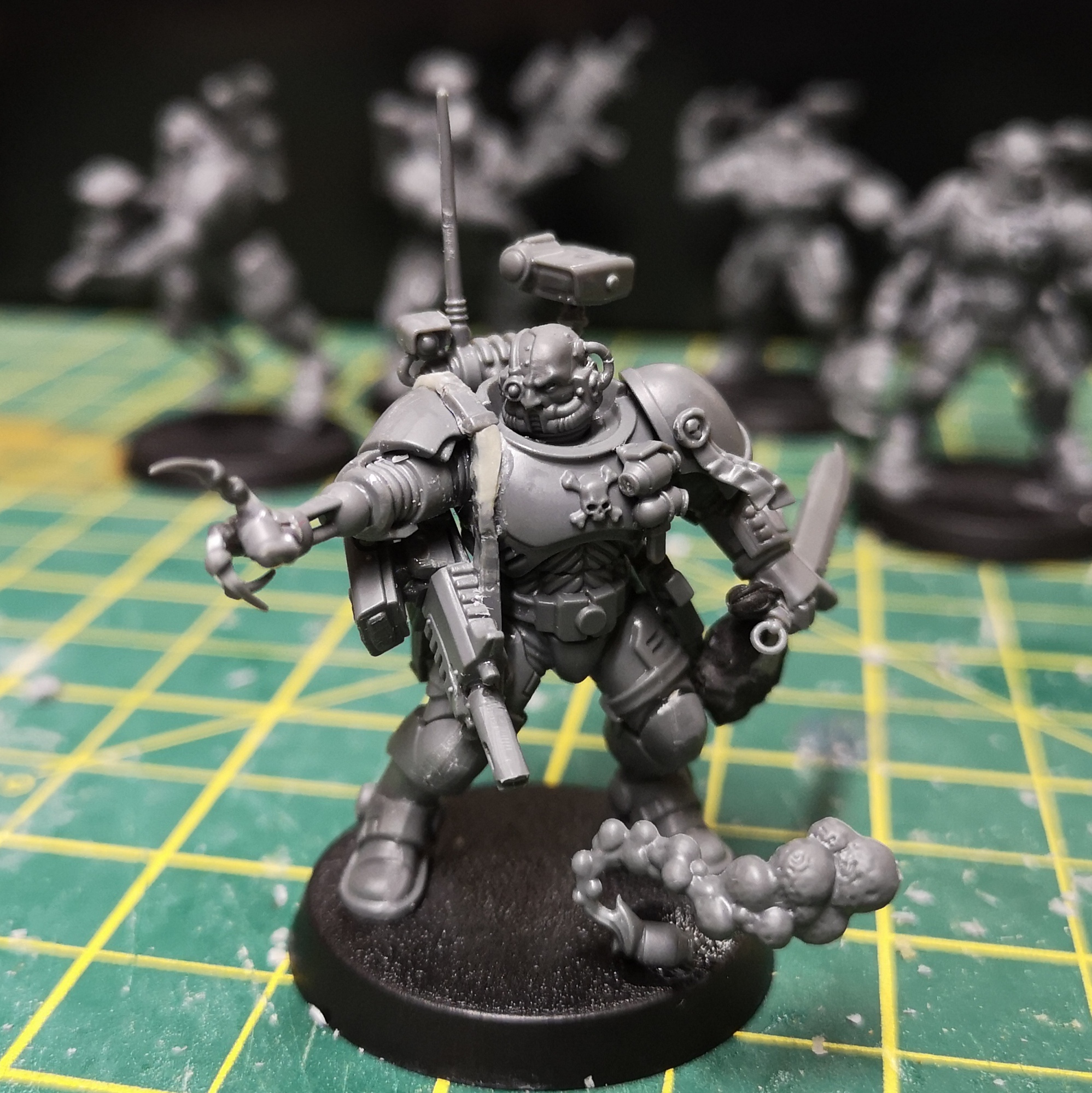 Decided to go for the funny little cameras on the backpacks in the end. 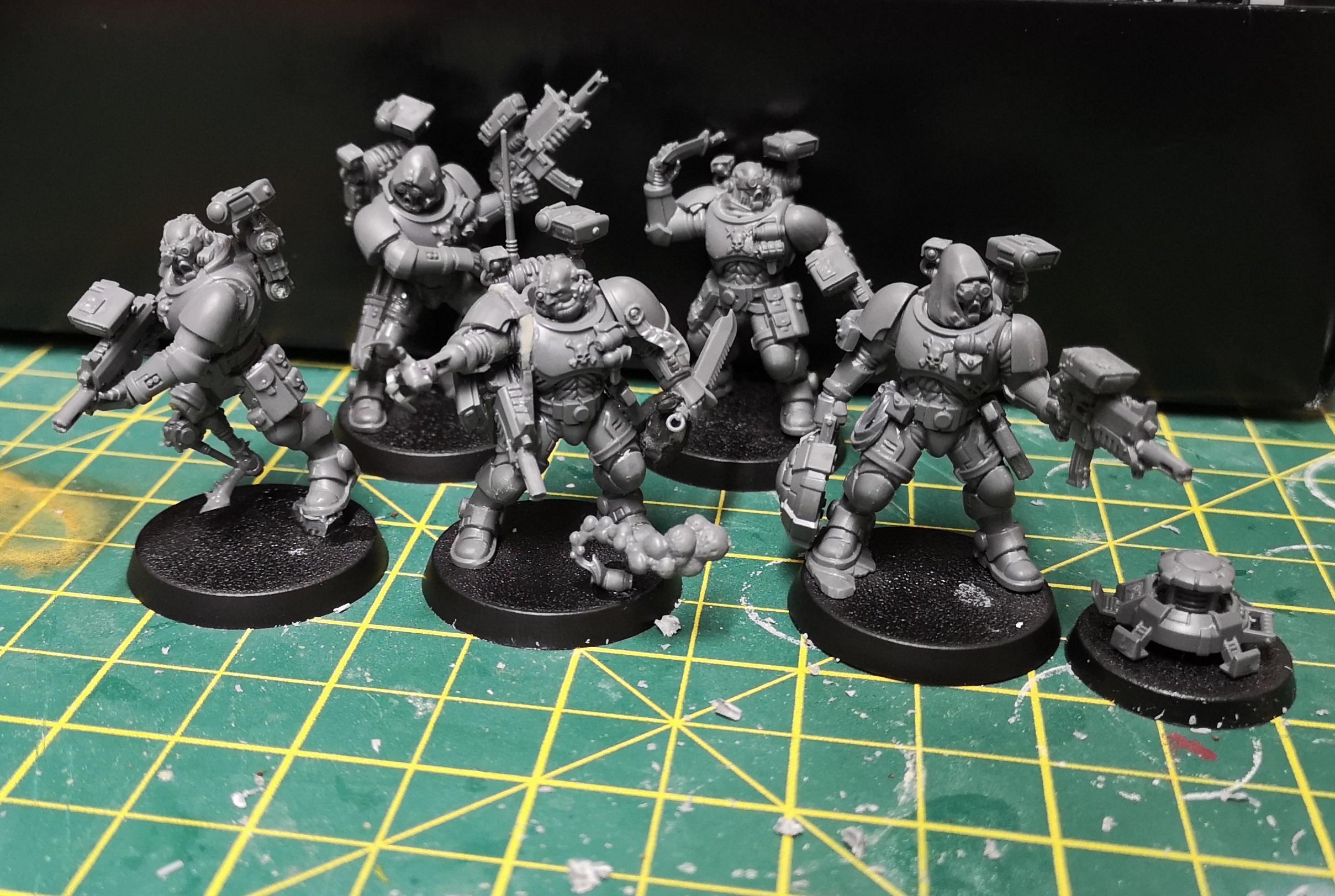 Hope to have more updated soon.

Love these guys, and stoked to see someone else doing Mantis Warriors! Absolutely adore that Eradicator conversion especially, that head is perfect!

Also tagged with one or more of these keywords: mantis warriors, space marines, kitbash