After looking at some of the melee weapons and units with the new 9th Ed. changes I thought it was time to look at some ranged stuff, starting with classic heavy weapons - ie. those available to a Devastator/Tactical Marine. The new blast rule has made this interesting as I have to factor that in, which floods the target profiles when trying to include multiple target sizes for each.

I decided to focus on the T3 profile at both 11++ and 6-10, Sisters profile only at 6-10, the new base Marine statline at both 6-10 and <6 and everything tougher simply at unit sizes below 6 to not trigger blast. It's still a lot, but just about manageable.

To start with I ran the numbers for the firer being on the move, as that can often be the case with a tactical squad or even devastators depending on their placement/weapon range. As usual the numbers are based off the unit stats without any extra buffs, auras or stratagems applied. Points efficiency is calculated on the weapon cost on top of an 18pt Marine. 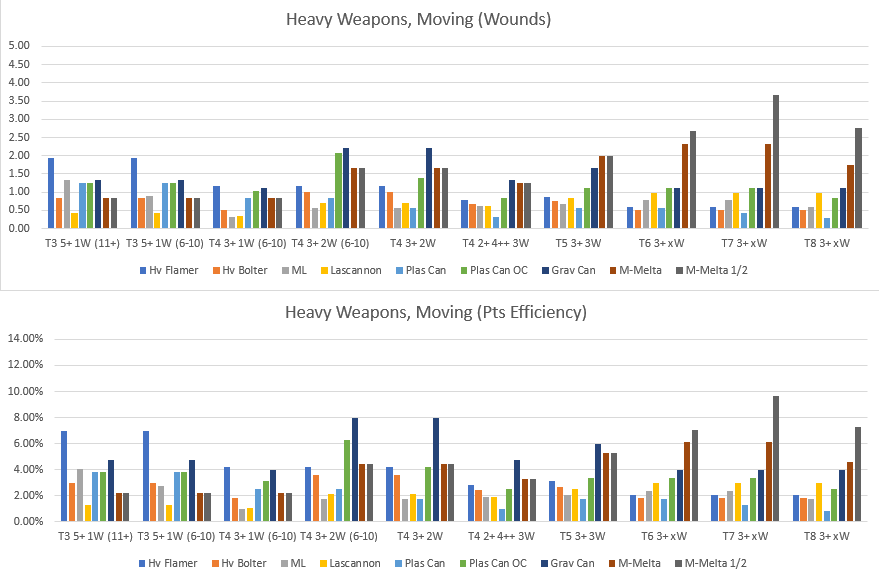 And then standing still: 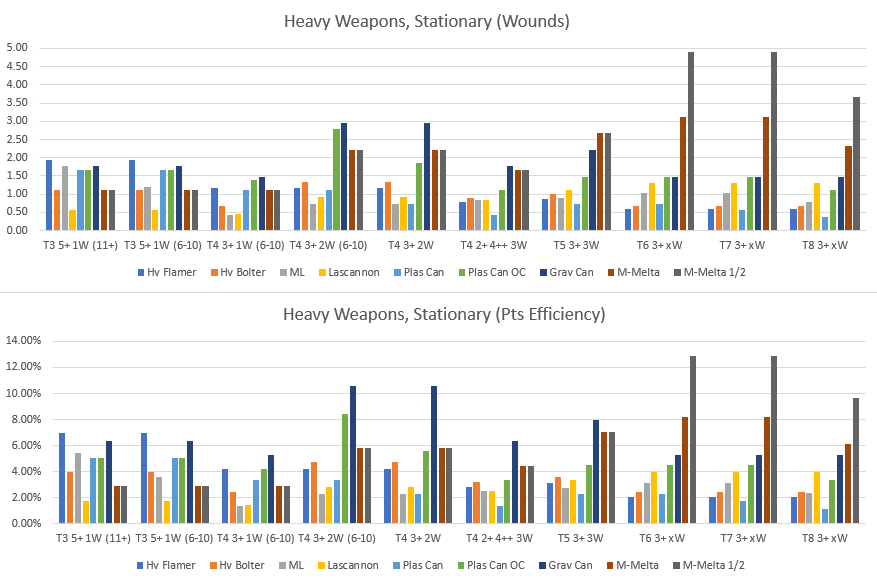 The main standout is the Multi-Melta as the new profile with 2 shots really lets it shine against anything with multiple wounds, especially when it's within half range. Great news for Attack Bikes, Land Speeders and M-M Devastators hopping out of a transport I'd say! The Lascannon and Missile Launcher with their single shots, lower AP and lack of half range damage bonus just can't compete with the Multi-Melta, their only advantage being extra range and trying not to move. (Note on the Missile Launcher: The charts use Frag against the weaker targets and Krak as soon as that becomes stronger against multi-wound targets).

The good old Heavy Flamer is the clear winner against the weaker single wound targets when looking at things on the move, but given its limited range and minimal impact against tougher targets is it really worth the points investment for an army likely to be full of bolters and chainswords? Othe rlonger range weapons close the gap if they don't need to move to hit the chaff (Plasma Cannons and Grav Cannons).

For all-round points efficiency the Grav Cannon has the highest combined output across all possible target types, with multiple shots helping against weak infantry and the extra damage kicking in against tougher targets. It's not going to be a tank buster but if you're facing a lot of the new Marines with their 2 wounds it could be really handy, solid against them and not too bad elsewhere.

Given the versatility of the Grav Cannon it raises the question of why use the Plasma Cannon, given the built in risk of exploding as soon as you overcharge. Similarly even with the new 2D profile I so no benefit to taking a Heavy Bolter instead of the grav either.

Anti-Chaff: Potential niche for Heavy Flamer (but serious limitations outside of that role). Not as far ahead as the M-M is against big stuff.

Edit: An interesting final note is that there isn't much difference in the charts between damage output and points efficiency. Because the weapon points costs are now all so close together, the higher output weapons are also the most points efficient. We're no longer in a situation where these weapons are ranged 5-30 points in cost, allowing some with lower output to actually be more points efficient. Having them all within a range of 10-20 means the Multi-Melta with its huge damage is extremely points efficient and the Heavy Bolter is overpriced in comparison even with the bump to 2D.

Just a quick note on the target profile T4 3+ xW. While that does cover the new 2W marines it also included things like 3W models and even characters with 5 wounds (as there’s no cap on the x). I realise this is slightly misleading when thinking purely about the new marine stat line so I will re-do these numbers changing it to a fixed 2W for that entry.

In the meantime assume that the Multi Melta being well above 2 damage against that means it has a good chance of killing a marine per shot.

Pendulum swings I guess? I'm happy that the good old multi melta finally is useful, but does it really need to outclass so many other weapons? The 2nd shot would have been enough I think.

Yeah, definitely means that initially MM will be spammed hard until point adjustments later on. I would hesitate to start ripping off guns on stuff but may be worthwhile to keep some on hand in case GW makes an honest and well thought out change.

I updated the charts in the original post with a fixed number of wounds for certain profiles. The marine statline is now set at 2W with the 2+ / 4++ and T5 3+ both at 3W (representing Bladeguard and Gravis respectively). That makes the higher damage weapons less effective against those, especially the 2W marine. This is a reduction against those targets for the missile launcher, lascannon and multi-melta as they can't use their full damage roll potential.

It doesn't change anything at the top end where the Multi-Melta still reigns supreme against vehicles and monsters and it doesn't change things against 1W targets which were already capped but it does change the look of the middle section, where the Grav Cannon stands out even more (alongside overcharged Plasma, but is that worth using versus the safer and still stronger all-round grav?).

I still feel like the heavy flamer needs a boost to let it be the clear winner against chaff (d6 hits is a lottery even with the autohit, given the short range) and the plasma cannon just doesn't feel worth it for the inherent overcharge risk. The lascannon is paying a premium for the range, which is arguably less valuable given many table sizes will be a bit smaller than in 8th.

It's still looking like Grav Cannon for anti-infantry versatility and Multi-Melta for big game hunting unless some stats get changed.