'Ai! Just telling me where you–'

The senior turned the switch, murmuring the imprecations. She ignored the girl's protests while she completed the old benediction. The machine spirit was forgetful and moody enough as-is, and the Monks Mechanical hadn't passed this system in a generation.

'Try to put it from mind, cilde.' The senior was not cruel. She closed her healthy eye and rubbed at the ache in her teeth while the junior talked of contact – real speech! Real people.

'You hear them.' The junior had angry, frustrated tears in her eyes.

She glanced at the heavy, brass instrument insolently, anger poorly hidden; each swing of its perfected pendulum like a judicial sentence.

'That transmiz was four centuries hence.'

'It is written, The whip is best when its cords are bound. The net is best when its cords are spread. True. But nets get ragged. Need patching. For oathkeeping, Gatebreakers send Gentles like me,' he paused, tapping his wrist-mounted reductor to explain the word 'to wear black.'
Entering the antechamber to the main room, he continued. 'It is for Gentles to renew bonds; serve and learn, and bring back.' He held up the claviger for inspection, its dark wooden haft chased with silver. Akkad could see odd, crude spiral designs, along with lines, arcs, crosses and meshes. They meant nothing to him. Yeng grinned. 'This tells Emperor to remember his Gatebreakers. To send thread to fix his net.' Akkad understood he meant arms and armour – and came to understand the mongrel, much-patched armour the Gatebreaker wore. Was there more? Akkad couldn't be sure.
+++

'Bloody bastards. Bloody, filthy bastards. Who thought this was a good idea? Who thought coming to the arse-end of nowhere, out on the Rim of existence, was a good idea?'
The little man cursed for a good while longer. The rest of them; Brunski, Haim, Septival; they all just looked out of the viewport. One by one, they turned away, until just the Inquisitrix and the Rogue Trader remained staring out at the empty skies of the Endworlds.
+++

Welcome, traveller. Welcome to the Endworlds; a region that – almost by definition – is beyond where you've been before.

The great galactic disc turns, and at its edges, things move faster than the Imperial Core. This is a shared blog – led by K0rdhal; Xin Ceithan; Vazzy and myself. In it, we'll be exploring the great, empty reaches of a sector at the galactic edge – one of the long-forgotten sectors of space that remembers the Imperium vaguely; if at all.

Here, in the liminal zone where stars are scanty, and the galaxy proper bleeds away into the uncrossable void between galaxies, strange aliens, petty settlements and exploration are the norm. We hope you'll join us on our exploratory trip, as we follow the first Rogue Traders in many generations to come to this distant place.

You'll meet the familiar; the unusual; and the unique:

We hope you enjoy the ride; and if you want to share it with us, then feel free. The Endworlds are a frontier zone, as empty as any place in the galaxy, and still here you find strange new worlds; curious cultures; and secrets...

Another apologist thread? Colour me delighted 😃

Ta very much – though this is very much a collaborative affair. The broad canvas is an area at the rim of the galaxy; the liminal area where the stars are thinly-spread and the Great Dark is all-surrounding.

I wanted to explore the sheer scales and distances involved in the Warhammer 40,000 galaxy, and I'm pleased to say that it caught the imagination of K0rdhal; Xin Ceithan; and Vazzy, all of whom have produced some lovely stuff to help add some texture to the rather scanty fibre of my fabric. I hope they'll be sharing their stuff here soon. This thread is intended for finished work; a god's-eye and impersonal view of the sector, rather than the more narratively-led approach of the work-in-progress threads.

...and so with that in your mind, fellow exploronauts, let's set off. Be sure you've packed everything; there's nowhere to resupply once we're there!

Simplex Surpalus? I had never heard of it. That in itself surprised me; so I ordered the records brought to my office. At first, I thought the wretched Adepts Third Class had made a mistake when they handed me a single, slim, hard-copy file. Forty microsheaves – all that existed of an entire Imperial Sector.

Nominally Imperial, Simplex Surpalus is so distant and thinly-populated that entire systems go uncontacted for generations before a tithe is eventually made. Imperial organisations like the Inquisition, Astartes – even the more mundane Munitorum and Ecclesiarchy – are less familiar to the inhabitants of these isolated frontier worlds than we might expect. 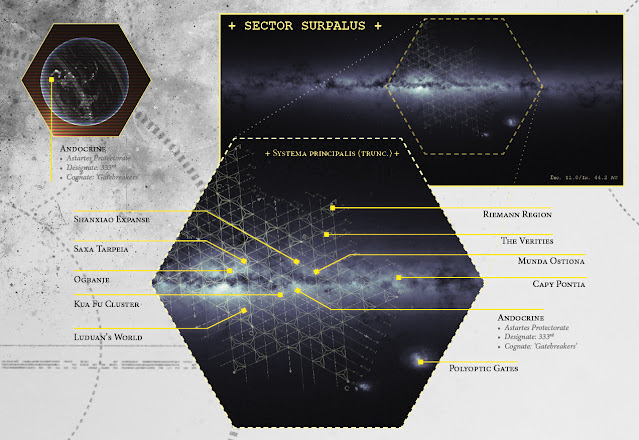 Of course, the monolithic nature of the Imperial machine means that it makes no allowances for this. The sector map notes the principal worlds and stellar phenomena; though as these have seldom, if ever, been consulted, let alone updated, they are impossible out of date. Stellar drift means many systems no longer sit anywhere near these boundaries.

The sheer scale of space means that Imperial administration and organisation above the level of individual planets is all-but impossible. There is no support for Imperial worlds here; no inter-connection; no means of reinforcement or help. All must look to their own devices. Communications meet delays, or are never picked up. Shipments from the Imperium appear, find no planet to which to deliver, and return. Beacons are lit; gutter, and die.

My thread of things:
http://www.bolterand...lds-some-stuff/

The Gatebreakers are a Chapter of my own devising. I've spent years making up stories in 40k (and 30k), and decided it was the proper time to try to create a compelling force. The (ongoing) tale of their exploits can be found in No Impediment to Progress, my blog in the work-in-progress section of the board.

I've chosen a narrative style to that blog, which has been fun to write, but isn't great in showing 'god-level' details of the sector. This collaborative blog, therefore, is where you can get a grand strategic view of the Gatebreakers as just one of the many pawns in Uridimmu's – and more on this fascinating character from the ominously talented K0rdhal soon – great game.

As a quick summary, the Gatebreakers were a Chapter on the verge of extinction owing to the particular pressures of operating so far from the rest of the Imperium coupled with their degrading biology. No sinister plots or magic influence here – the Gatebreaker's slow decline is emblematic of nothing more sinister than that facing the Imperium as a whole: a lack of scientific understanding and thousands of years of gradual loss in an region of eternal war. Thought lost, a new Primaris Chapter was created, given their heraldry and name and sent to claim Andocrine. Imagine their surprise when they arrive to find the Chapter still extant; still fighting wars...

I wanted to explore the practicalities and cultural conflict that merging Primaris and 'firstborn' Astartes Chapters would cause, as well as enjoying exploring a non-Codex Chapter's culture. In short, the Gatebreakers are an unremarkable – though hopefully not uninteresting – Chapter; and one that reflects how I think the Imperium typically works beyond the really influential Chapters that often sit at centre stage.

I hope you like what you read; I'll be maintaining the narrative over at the WIP blog, and posting up finished models here with more detached god-level info. If you have any questions about markings, organisation, history or Chapter culture etc., this is a good place to ask. In fact, I'd love any questions you have, as that'll help to ensure the worldbuilding for the narrative blog is as consistent as possible. In the meantime, here are some pict-captures of the Gatebreakers as they begin to reassert themselves across their ancient domains. 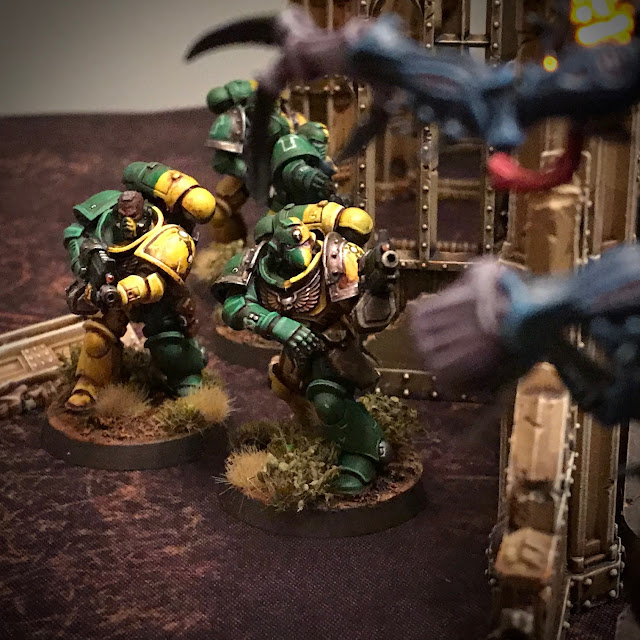 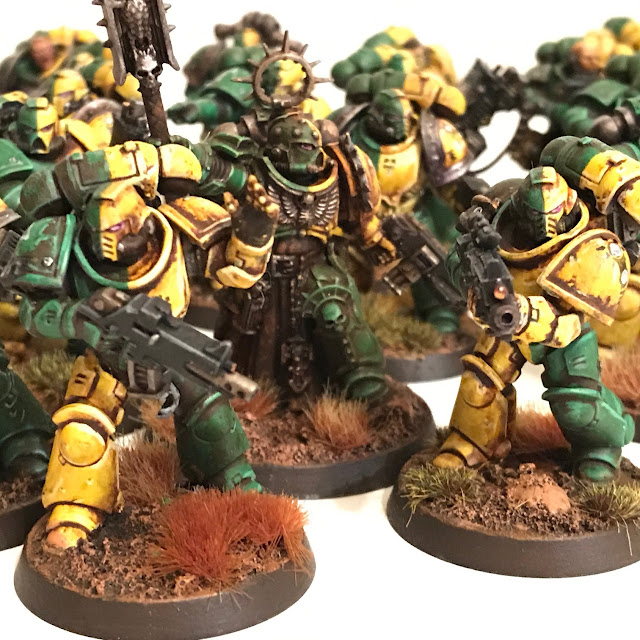 + Abstract +
"It is written in the odes that the seventh divine prince pronounced that some men wear masks; because they seek to share the true self beneath with a select few. The sage Hinn disagreed. He said that there is nothing beneath the mask except another mask."
- Oto Yeng, Gatebreakers Claviger apothecary-errant
The Gatebreakers are a Chapter in some distress. Nominally Lords of Andocrine – a system on the very edge of Imperial territory at the Galactic rim – their homeworld has, through necessity, long been abandoned. It is used along with the other inhabited planets in the region by the Chapter only for snatch-and-grab recruitment.
The Chapter itself occupies the vast wilderness space of the region, with the Astartes roving nomadically, only intemittently returning to largest of the ammonia-wreathed dwarf planets of Androcrine. The Chapter specialises in void warfare and ship-to-ship assault.
Or at least; that is its boast. In truth, the Gatebreakers are suffering from numerous and growing gene-rune problems. Their melanchromic organ and neuroglottis are non-functional, and more than ninety per cent suffer catastrophic collapse of the sus-an Membranes prior to leaving the Scout Company-analogues. Many suffer irregularities of the oolitic kidney or paralysis of the multi-lung; while a minority also suffer failures of the occulobe or Lyman's ear, necessitating bionic replacement. While it is officially no shame to bear geneseed with failed or misgenic organs (the Imperial Fists being a good example) the sheer level of failure to the Gatebreakers' seed is a point of deep shame to the Chapter, and they go to huge lengths to conceal the extent of their sickness. 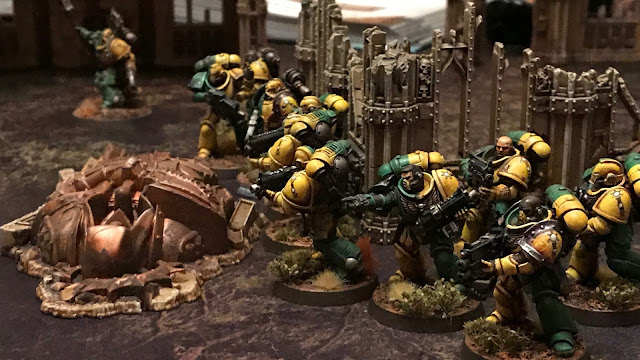 Recruiting heavily in order to make up for the sheer level of catastrophic failure, the Gatebreakers harvest the three worlds of Andocrine regularly, launch slaving raids on any non-Imperial human worlds they come across, and demand payment in the form of a planet's youth when they come to its aid. As a result both of this and of the weak influence of the geneseed, the Gatebreaker's phenotype is hugely diverse.
The Chapter's culture – insular to the point of isolationism – has deemed this inner corruption must be hidden; to the point of short-stocking or withholding their tithe completely. Thus far, their distant galactic position and mobile nature has meant few Imperial parties are particularly interested.
[This text was written a while back; prior to the arrival of the Primaris. I'll cover how they fit into this in a later post.]
+++
+ Markings and heraldry + 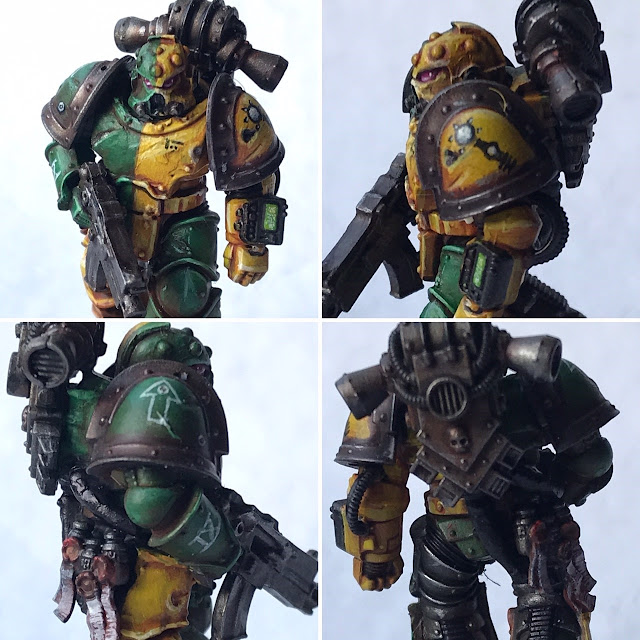 The Chapter symbol is a mace, with five points. It's a figurative representation of the Chapter's intentions – a brutal, direct weapon of war. The points symbolise the Chapter's multiple companies and ability to work more independently. Further, the handle contains an orb above the weapon's grip. This symbolises Terra, and the God-Emperor – it is he that directs the Chapter. The ball of the mace, figuratively distant from Terra, represents Andocrine.