How Essential are Power Cables (etc) for Heavy Weapons?

I'm working on magnetizing a box of Havocs and a box of CSM with the intent of making the weapons interchangeable between the two unit types. One minor complication I'm having is with power cables being difficult to connect. How important is it to have these cables, really?

Lascannons seem like they could reasonably need these cables to function, the Missile Launchers seem like I'm just as well cutting them off. I seem to recall plenty of cases of heavy weapons being picked up or discarded on the battlefield in lore. Weapons with ammo feeds going to the pack might be more necessary, but I think those might connect a little easier. Alternatively, I could just try to throw something together to act as a magazine for the ammo. More on that point, how do people convert heavy weapons from Havocs to function on CSMs? Do you have to take the backpack and sacrifice a Havoc?

Lore-wise, even in the case of heavy bolters and missile launchers, those power cables feed targeting optics (and their data back to the marine), and the electric firing pin. - Bolt shells aren't percussion ignited, although pumping the charging handle once is sufficient to get the weapon going, then the recoil will generate enough juice for subsequent shots.
But yeah, there are tons of "pick up n'go" heavy weapons everywhere. There are heavy bolter minis out there with box mags on the weapon for example.

Model-wise, they're your figures, let none stop you from modding them how you please.

Game-wise, they'd be still recognizable as a specific heavy weapon.

Execution-wise, if they're anything like the devastator squad who's backpak fed heavy bolters I've used in a conversion, you'd be better off assembling torso-legs-head into one solid part, and hands-weapon-backpack into another solid part as the magnetized clip-on(in case of cable-less weapons, backpack inaturally remains separate). They'll fit better, and suddenly cables and ammo feed are no longer a problem. One magnet each arm, one on the backpack.

Practicality-wise, I woulldn't do it.
Do I understand you correctly? Your goal is to sometimes take off a heavy weapon from a havoc and put it on a csm, and put the csm's bolter on the havoc?
Forgive me if I'm slow in the morning, but why not just put the entire model in whichever squad you want him to be?
Lo, the hand of judgement descends from above, and by the power of chaos declares thee a havoc. Tomorrow you'll be a csm.
For the life of mine, I couldn't tell the difference between a havoc and a csm if they're wielding the same weapons, heavy or not.

I seem to recall plenty of cases of heavy weapons being picked up or discarded on the battlefield in lore.

Havocs don't discard or pick up their weapons, their guns fuse into their bodies. Non-specialist chaos marines might be able to pick up a discarded rocket launcher but for Havocs those cables are symbiotic organs.

If you want a chaos marine with a lascannon you basically have to convert the havoc ones so might as well cut off any parts that make it harder to attach.

With Chaos you can have units look like whatever. If your Havocs have less cables they might be junior Havocs who haven't had time to develope a close symbiotic relationship with their gun or they might have a wireless telepathic connection.

While arms and backpacks are made to be interchangeable between the two kits you might run into some problems because the heavy weapons were made to match up with a specific backpack bit, especially the ones that are carried over the shoulder like the lascannons and rocket launchers which replace the right vent/stabilizer thing.

For the heavy bolters/autocannons/reaper chaincannon, if you replace their ammo belt with a large magazine you should be able to get away with giving the models regular backpacks and just magnetising the arms for weapon swaps. Sure they might not have extra ammo but many warbands are forced to scavenge from the battlefield.

For the life of mine, I couldn't tell the difference between a havoc and a csm if they're wielding the same weapons, heavy or not.


I believe he just wants to move the heavy weapons back and forth. Havocs are now T5 and modeled noticeably larger than regular CSM with larger bases. 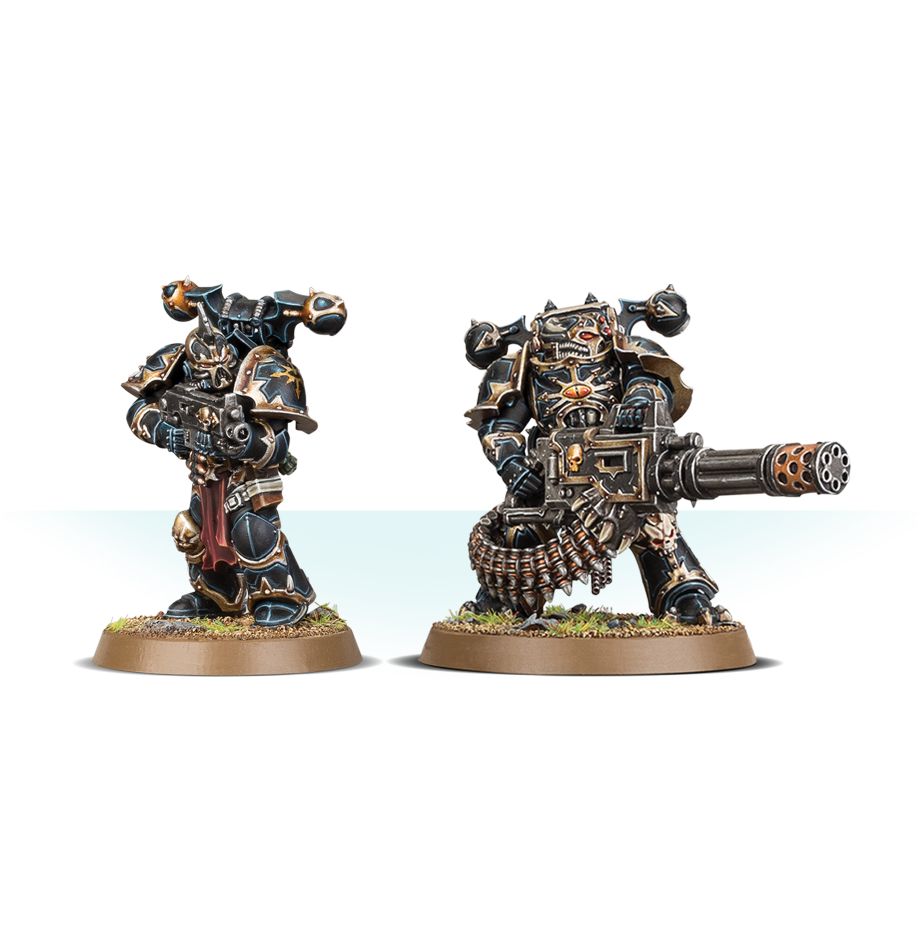 Honestly with a little creativity, time, and care you can try to model the lascannons and missile launchers to be held like some of their heresy era counterparts and completely circumvent the need to be modeled connected to a specific backpack.

Just magnatize the bases would be easier.

Paturabo is correct, I want to move the heavy weapons back and forth between the two units. Havocs are noticeably Havocs and not CSM in the current miniature line, they are larger and have additional armor plating, so I wouldn't want to just swap the base sizes. I will probably try assembling the whole weapon system (arms and pack) into a single piece and see how that works. I am a little worried about how fragile this assembly might be though. Any advice on getting an especially strong connection point on the cables/ammo feeds so I can make them into a sturdy single assembly?

On the note of the cables, there are still cables connecting the Havoc helmet directly into the weapons without going through the backpack. Since the Missile Launcher seems like the weapon I will use most in CSM squads, I might just cut the cables from them and let the helmet to weapon connect be adequate and maybe be given to the "junior" Havoc when I do outfit them with a Missile Launchers.

One dude in 5 or 10+ thats just slightly larger isn't much of a big deal. As long as the base is correct its not really an issue IMO. If you were putting a new havoc in the older CSM or mk III-IV squads, then yes it would be super noticeable.