This is an ongoing topic i have on another forum so i thought i would re-post it here for those who have not seen it.-

I decided to start this topic as i notice a load of people who really like the skirmish play of RT and second edition (never played it myself but i have some of the books). or those like myself who started in 3rd who think the direction that 9th is going is a bad direction we are not interested in moving into it.


There obviously is a drive for players to want to play the current edition, but nobody is forcing us to.
Because of that. this thread will lend itself to social or casual play and not the current tournament meta.

Nobody disputes how great GWs model have become. if i already didn't have a huge collection i wouldn't mind using primaris to represent tactical marines and such.

I got my start with dark angels back in mid 3rd ed so i have been playing for 2 decades. my preference is for 5th edition as the logical progression of the game.
6th edition was a death sentence for 40K at our FLGS, it came back a bit in 7th and more in 8th, after seeing the direction that GW is going with 9th i am completely turned off by it.

I find 8th bare bones to be excellent for playing in epic 6mm scale for speed and ease of play at such high points levels,  and still do with halving all movement and weapon ranges.

With great 3rd party companies like vanguard, onslaught, trolls under the bridge (necrons and some rare guard units) and other 3d printed sellers on ebay there is no shortage of any 40K unit to play with in 6mm scale.

Our FLGS has a small group of veterans who have been playing as long as i have who also prefer 5th and are teaching people to play it who know nothing before 8th edition.

All the rules we added into 5th were better versions of the rules that existed before or after so we didn't make anything new. our big drive was to get back to the lore/fluff based rules. immersion in the universe is why we play 40K and from 8th ed on it is a completely different game that lacks that feel.

To this end we allow players to use whichever codex they feel best fits their faction within the framework of 5th edition core mechanics and USRs.
for example to best represent dark angels my pick is always the 3.5 mini dex, for chaos the 3.5 dex, for imperial guard the 5th ed dex, the 4th ed dex for nids and tau etc...

I have been having loads of fun fighting the 3.5 version of khorne berserkers with my salamanders(5th) and allied grey knights(3rd).

Adding in newer units is pretty easy since 3rd-7th are cross compatible. for example our chaos player wanted to use a helldrake with his 3.5 codex so we use it's base cost/rules from it's original 7th ed entry and all vehicle upgrades/abilities come at cost from the 3.5 codex. a helldake with parasitic possession is a bit spendy but very worth it.

I am looking to add the excellent 4th ed black templar and 5th ed blood angels dexes to my collection at some point.

Aside from gene stealer cults, knights, death watch and dark eldar i think we have pretty much every faction covered.

I think its a hard sell outside of your own gaming group but it sounds fun, glad you are enjoying it

What’s your group like - where do you play, how do you know each other, how often?

What’s your group like - where do you play, how do you know each other, how often?

The majority of the group that sat around for several hours and thought this up back when 8th edition dropped have been playing since at least 3rd edition the group has expanded a bit as we teach new players the older edition+ house rules who have never played anything  before 8th edition.  we play at a FLGS. we have known each other as casual regulars who play a variety of games together basically every saturday(i have only missed 3 saturdays in the last 12 years. not bad considering i am running the gaming area).  there is a core group with other players coming and going (lots of military bases near us so we cycle through  players). before COVID restrictions we were able to have many more players obviously(the store game area is rather large...old picture from before covid- 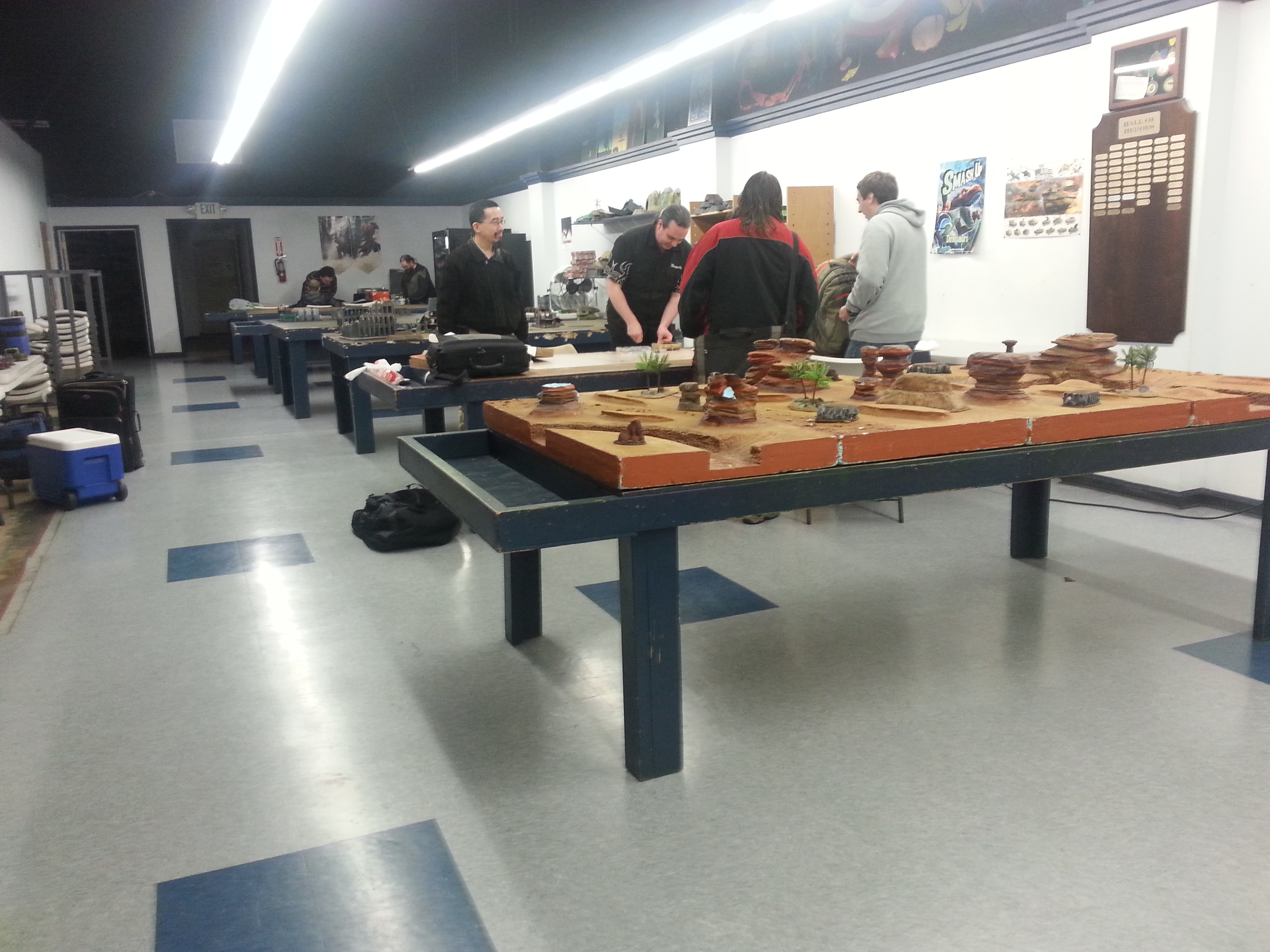 averaging several games each weekend, currently we are down to one or two games at most because we have to have our games via private invite only groups to meet size limit requirements.   this means we have to wait until the store closes, so we are getting a much later start than we normally do.

Like the idea - how do you deal with skimmers? Using 4th ed vehicle rules, they were unkillable - glances only for a skimmer moving fast (6 - 12"), hen combined with holofields makes them near impossible to kill. Add in the 12" range penalty for skimming fliers and you have a tough nut to crack.

I'd increase S of defensive weapons to 6 from 5, as S5 rules out some obvious things like assault cannons, shuriken cannons, scatter lasers, etc. which are obviously 'defensive'.

A major imbalance that 8th fixed was between degrading vehicles and non degreading MC's - how did you deal with that?

Also the old armour ratings were functionally identical to T values - in that a S8 krak missile needed a 4+ to 'wound' a AV12 tank.

Like the idea - how do you deal with skimmers? Using 4th ed vehicle rules, they were unkillable - glances only for a skimmer moving fast (6 - 12"), hen combined with holofields makes them near impossible to kill. Add in the 12" range penalty for skimming fliers and you have a tough nut to crack.

I'd increase S of defensive weapons to 6 from 5, as S5 rules out some obvious things like assault cannons, shuriken cannons, scatter lasers, etc. which are obviously 'defensive'.

A major imbalance that 8th fixed was between degrading vehicles and non degreading MC's - how did you deal with that?

Also the old armour ratings were functionally identical to T values - in that a S8 krak missile needed a 4+ to 'wound' a AV12 tank.

1.Since we are basing it off 5th the fact that 4th ed rules favored skimmers as they could only every be "glanced" is no longer an issue. in 5th they are just as easy to kill as any other vehicle. what we are using is the 4th ed rules used to ATTACK vehicles in CC  based on how much they move(how hard they are to hit) if i didn't make that clear. it's forces a tactical trade off between more accurate shooting or moving.

Also by combining the original FW rules for flyers with the 7th ed rules it balances them out as well.

the penalties to hit are there in range and needing 6s for non AA mounts (giving them an actually  dedicated battlefield role again).  but there are 2 ways to instantly kill them with a pen destruction or a glance /pen immobilization result  instead of "vector lock" (FW allowed chaff/flare dispenser upgrades we put back in to allow that one time per game re-roll of the immobilize result)

2.Since we are purposely avoiding creating our own rules we stayed with the S5 defensive weapons as it is a rule GW made that we can directly reference. also many vehicles with S6+ secondaries are already benefiting from being fast vehicles having POTMS or the fact we are using snap fire.

3.While we all did like the idea of degrading creatures we again were trying to stay away from writing our own rules. if i had to write my own i would have given creatures a converted version of a vehicle damage chart that blew off guns or slowed their movement.  the compromise we thought best was to remove the "can-opener" aspect by using the 6th edition smash rules giving them half their attacks rounded up at S10 rather than every attack at strength with 2d6 armor pen.  when you consider a blood thirster is normally S8/9 with something like 6 attacks on the charge, effectively making him 6 meltas was a bit excessive.  the trade off for weapons like meltas is their low volume of fire to counter how powerful they are.  6th ed smash had the same end result.

4. yes and no. the scale is not consistent. vehicles having facings and AV are not only intuitive and rational to human experience as well as a big part of tactical play.  a T value does not have the same segregating ability that armor does as T would effectively negate the need for facings (also almost every vehicle in 8th+ is T7 regardless of what it's AV was in 5th).

Against a predator you may need a 5+ from the front to glance the armor but that drops to a 3+ or a 2+ from the sides or rear with a krak missile.