With 9E in and the supplement to be released next month, I'll be joining the sons of Sanguinius as well going forward, working on the Lamenters chapter.

I have the base coat of yellow done on some reivers, which will be the first models for the force. I haven't done yellow before, so these will end up where I do a bit of the experimentation with them. 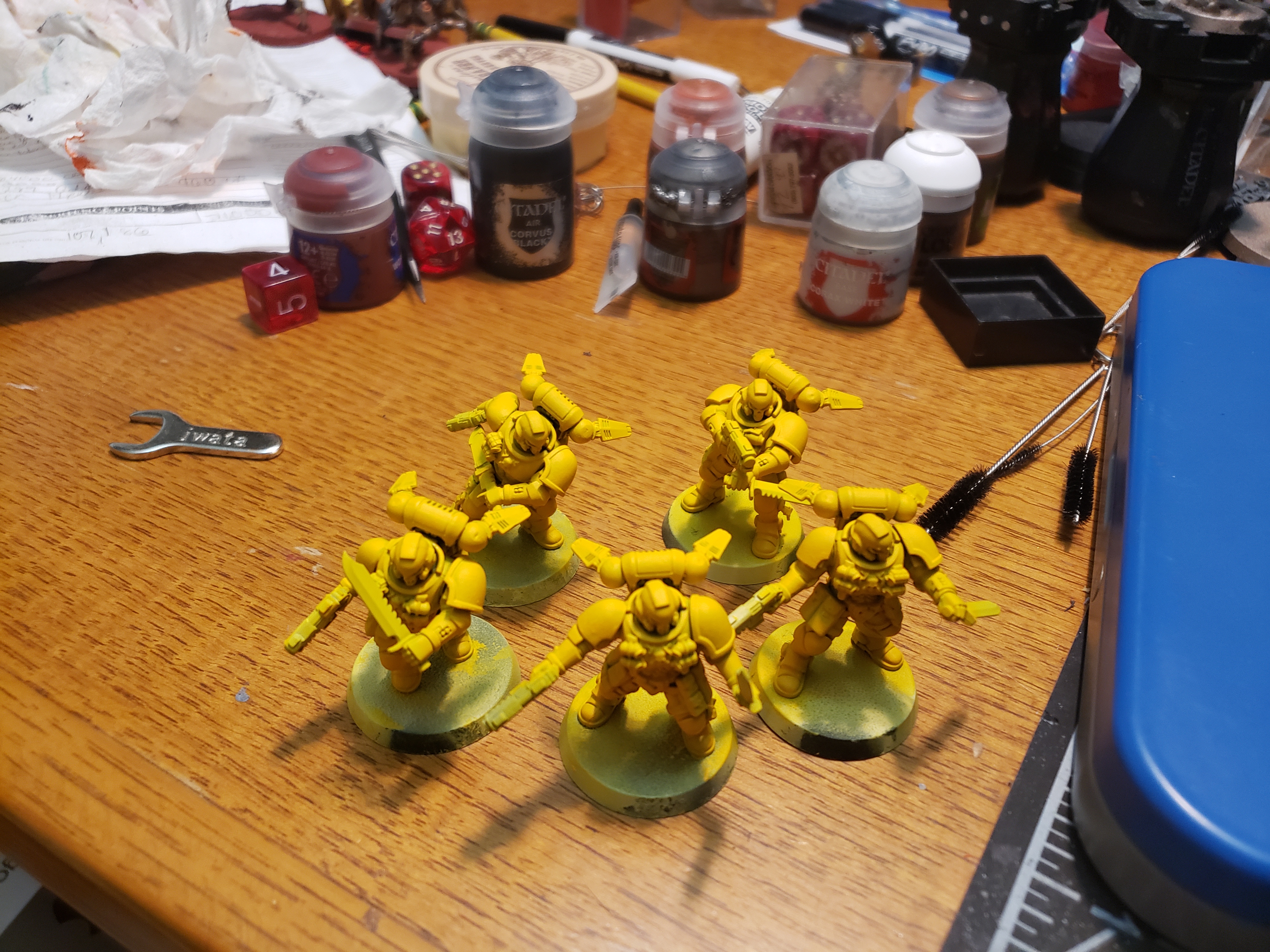 I have some models that I haven't yet assembled from a dark imperium box, as well as some others that are unassembled that I'll end up putting to this and some other projects.

Good luck with your project!
Always nice to see someone tackle Lamenters

I look forward to check-ing out what you do with these guys.

Thanks! The checkers will be fun to paint on the shoulderpad, but I freehand checkers for HH DA all the time nowadays, so I'm not really worried about that.

If anyone has any information on helmet markings, etc., I would appreciate it a lot. From what it seems, the left kneepad should have codex colors, with the right shoulder having black squad markings and white numbers.

I am however, uncertain on helmet markings. I am completely unfamiliar on the concept, as I have only worked on DA and SW, and I do not at all have the imperial armour books including Lamenters.

Basing on our 8th ed. Codex, a Lamenter will have his battlefield role (Battlelinie, Close Support, Fire Support, Veteran, HQ) shown with a standard Codex Astartes marking on his right shoulder pad, with squad number displayed over it in white. I do see some issues with this for the Fire Support and Close Support role as those markings do not provide big enough black field for the whole white numeral to fit and so part of the numeral will be on the yellow field. Which in turn will make them less-visible.

Imperial Armour Badab War book shows Lamenters differently in that they display a big black Company numeral on the right shoulder pad without any battlefield role marking.
So it seems you have some freedom of choice in designing those.

As for the helmets, I think Veterans got a black stripe on their helmets (Badab War Imperial Armour book?). Also, I think their original RT colour scheme had a red stripe on a helmet, so you might like to incorporate that for HQ perhaps? Other than that their helmets are uniformly yellow

I do see some issues with this for the Fire Support and Close Support role as those markings do not provide big enough black field for the whole white numeral to fit and so part of the numeral will be on the yellow field. Which in turn will make them less-visible.

If Wrath is going to be freehanding all those checks, I think a couple of small numbers should be no issue! Keen to see how these guys come out. WrathOfTheLion will you be weathering them? I think yellow weathers pretty amazingly., and if any chapter is beaten down, it's probably the Lamenters.

If Wrath is going to be freehanding all those checks, I think a couple of small numbers should be no issue! Keen to see how these guys come out. WrathOfTheLion will you be weathering them? I think yellow weathers pretty amazingly., and if any chapter is beaten down, it's probably the Lamenters.

I was rather making a point of white being a poor colour choice for a text on a yellow background. No doubts at all in Wrath's skill

But I definitely second the weathering idea!

I'll look at the size of the DA squad numbers, where I will get the gothic numerals, but I think it will be fine.

I think I will at least do some minor weathering, especially around the boots and all.

Have some of a dark imperium box, some infiltrators, some assault intercessors and some intercessors now about with the yellow base coat, should have some images later.

About burned through a few pots of yriel yellow through the airbrush though, that paint does not go very far. Have more on order, will need quite a bit I think.

Have the yellow airbrushed on these, I like it much better than how the yellow turned out on the reivers. I think I'm going to strip the reivers and start over, as using just the airbrush is working out much better, and I switched to wraithbone -> averland -> yriel instead of just wraithbone -> yriel. I also had some trouble with the yriel coming out with more of an orange tint when putting it on by brush, not certain if it was just separating some, but it was something I noticed.

I do like that the new supplement has an example with a painted Lamenter.

There's more miniatures at this stage, but I don't think it's useful to try to put all of them in the image. 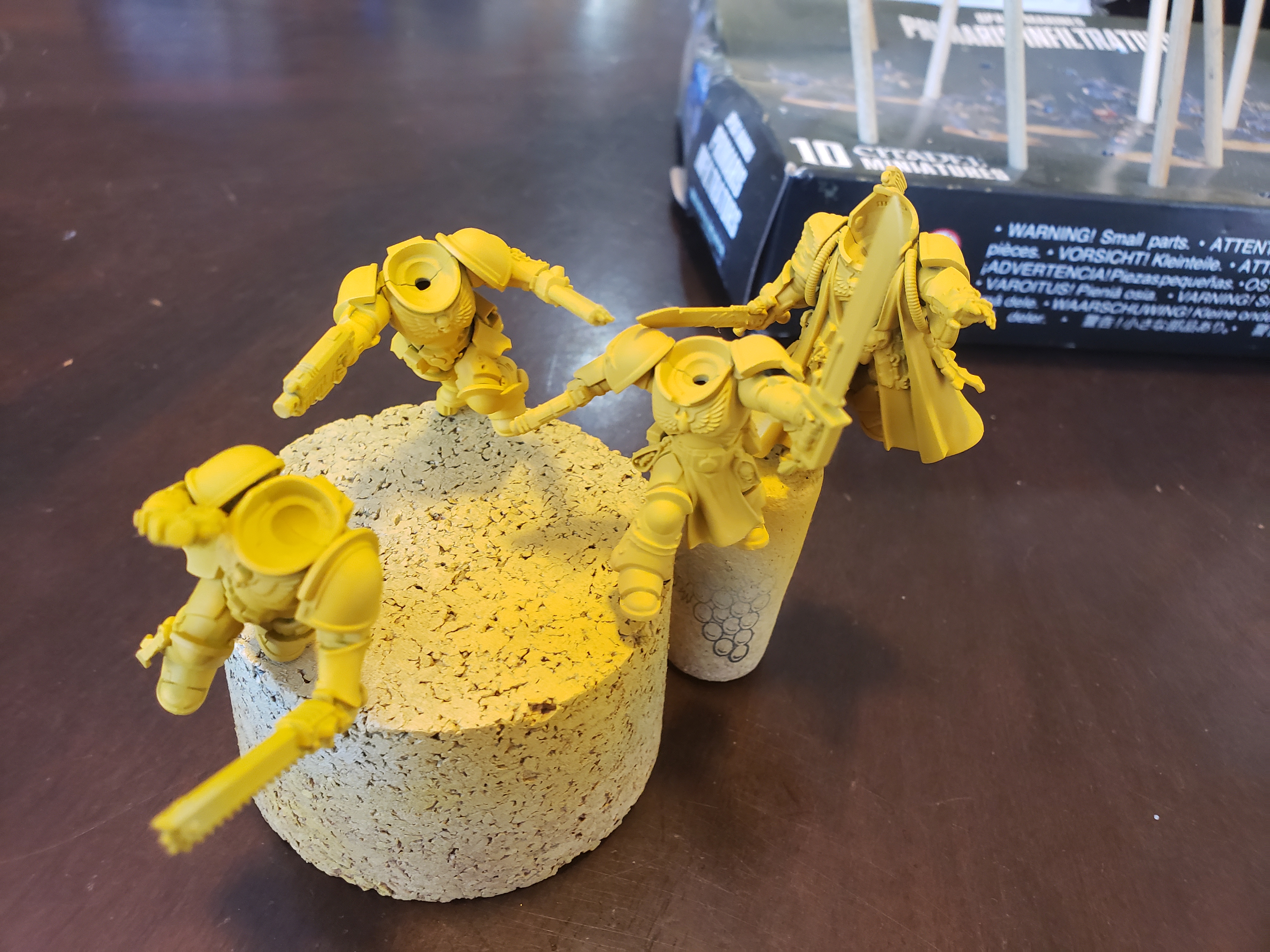 I think I'm going to strip the reivers and start over,

That's a shame, though setting yourself back to square one regarding having a painted army - maybe save stripping and repainting for when you have the whole army built and painted, so you can bring the older stuff to the level of the newer stuff?

Speaking from experience, perfectionism is hard to deal with. You'll always be a better painter after finishing a unit, so when you go back and look at other work, you might not be so happy with previous efforts and want to redo. That way madness lies.

The reivers are just five models. It will only take me about a day to get them to where they were.

I've already about finished stripping them. I broke them down some now as well to finish the stripping, and will make it much simpler to prime and get the yellow on with separate arms and all.

This is more just to make them look consistent with the rest of the force now that I have how I want to do yellow down. The Reivers were test models, as I mentioned at the beginning. They were the first yellow models I had done the basecoat on, now I'm quite comfortable with yellow.

I did strip the pilot for an invictor that was originally for another project with them. The warsuit itself needs some last steps to be built, but I decided to add it to this project instead.

Looking for inspiration painting yellow, your dudes are a nice, cold yellow that I like - is that really just wraithbone -> averland? I'm convinced Averland is actually quite a warm colour, but your shade of yellow is what I'm looking for I think!

It is wraithbone primer, then airbrush averland and then a final airbrush of yriel yellow.

Since there's no airpaint for yriel, I premix some with tamiya acrylic thinner. I keep an old Yriel Yellow pot that I fill from other pots and the thinner to have some on hand instead of mixing into a cup every time.

I have some infiltrators that are almost done that I'll post later. I warmed it up some using skeleton horde for the recess shade, which makes it a nice golden color, but you could use any yellow, brown or sepia wash I would think. I prefer the sepia tone of skeleton horde to using the more brown agrax.

I did find that doing averland in between the wraithbone and the yriel was important, it came up to a crisp yellow much faster with the stronger yellow underneath. Yriel doesn't cover the best, but it definitely does better with an actual yellow underneath. From experimentation, I found that just wraithbone -> yriel caused it to get too much of an orange tone, having that averland sunset layer in between kept it towards yellow.

I do between 2 and 3 full coats with yriel and the airbrush. About at two it comes to where I like it.

With my Lamenters I've been doing their combat role markings like the blood angels do, with different colors on their helmets. Blue for heavy support, red stripe on yellow helm for close assault, red helms for vets, gold helms for certain HQ's, and basic yellow helms for battleline

I decided against that after some digging into some of the Forge World material.

For sergeants and veterans, will add a black stripe on the helmet.

Nice job on the yellow! I’ve gone for kind of the same thing with my Lamenters, Sgts and Vets with a couple of my own additions.

Lt’s have the black and white stripe and Captains have unique yellow helms with additional decorations and filigree.

Also tagged with one or more of these keywords: WIP, Lamenters