I'm a big fan of 2000ad's dark judges. In particular I love Kek-W's incredibly creepy fall of dead world stories. Its full of really cool and creepy art about undead judges corrupting the world on their omnicidal crusade.

As a lock down project I've started up a necromunda gang loosely inspired by them. I don't know much about the current iteration of Necromunda but its a gang of enforcers. My loose story is the dome with their sector house collapsed decades ago and was written off by the authorities. Something (archaeotech? pyskers? Xenos technology, the forces of chaos) stopped them from dying, leaving them in a cursed half life. Now they're back and out for revenge on the living! (Any suggestions for gang make up gratefully received.)

Here are my pictures of the current enforcers I've started. Brothers Blight, Panic and Revulsion. Next up I have to green stuff Panic's arms to his body. Please forgive the poor quality images. Hopefully I'll be able to rig up a light box for some better quality ones soon. 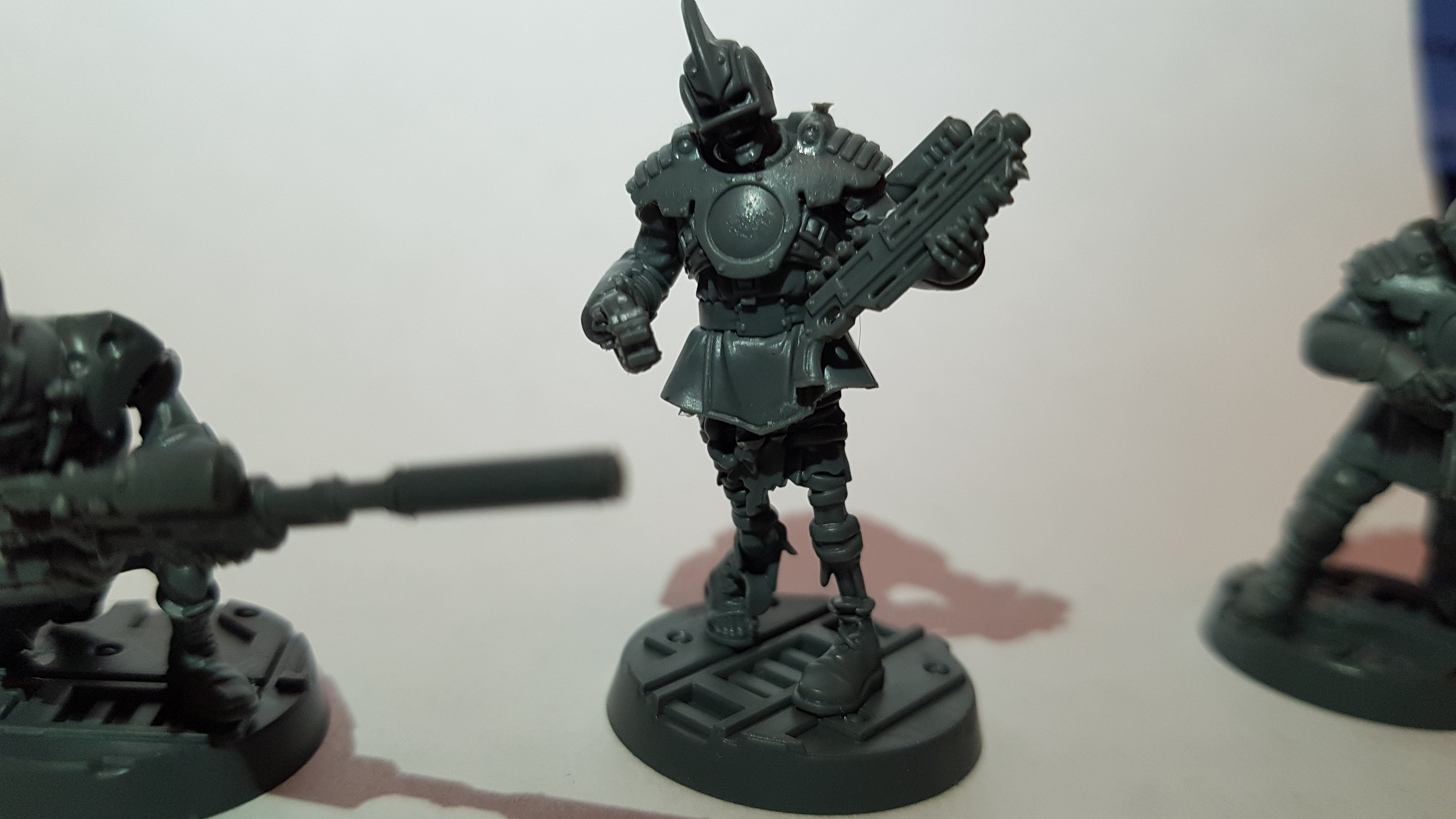 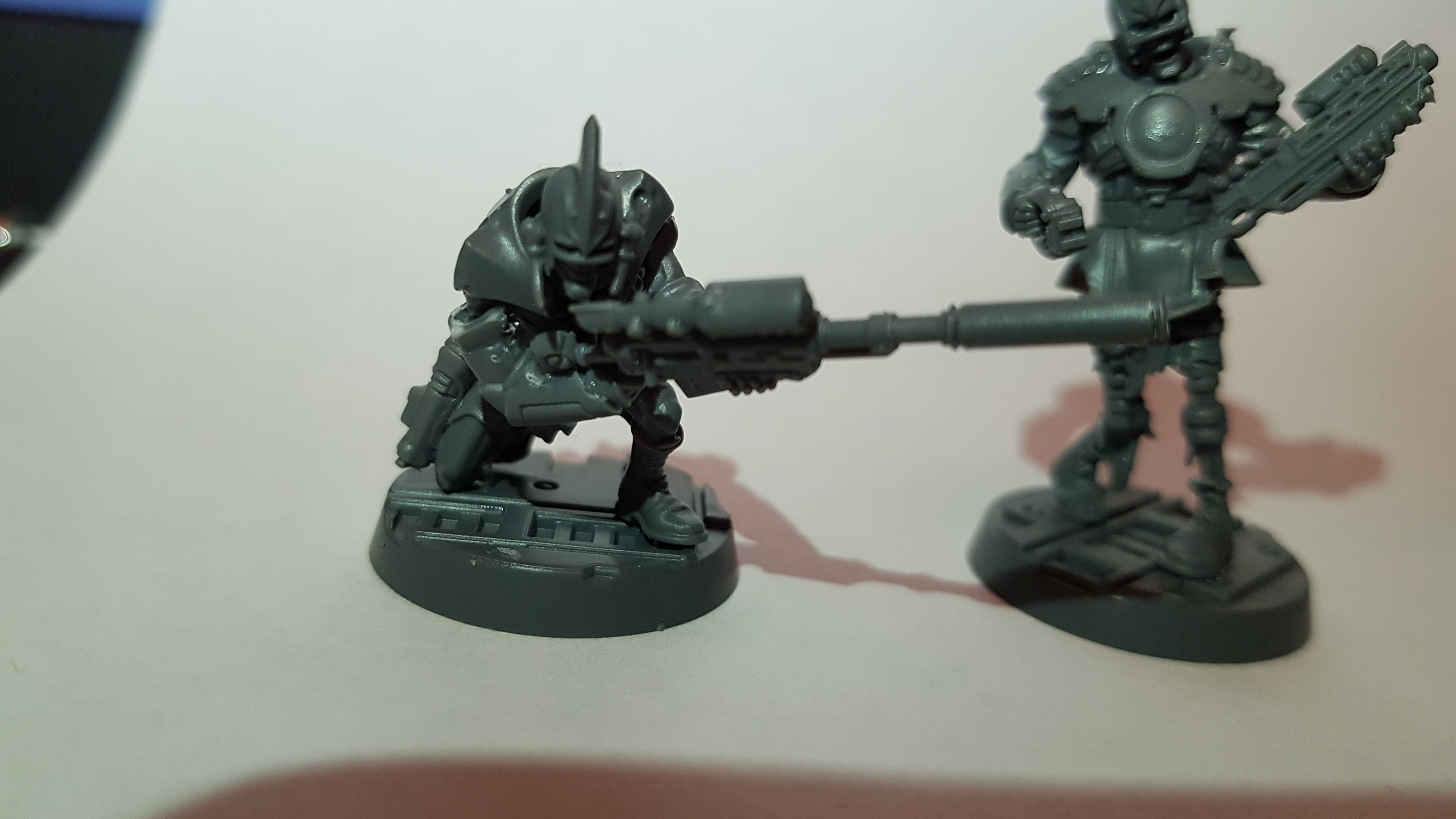 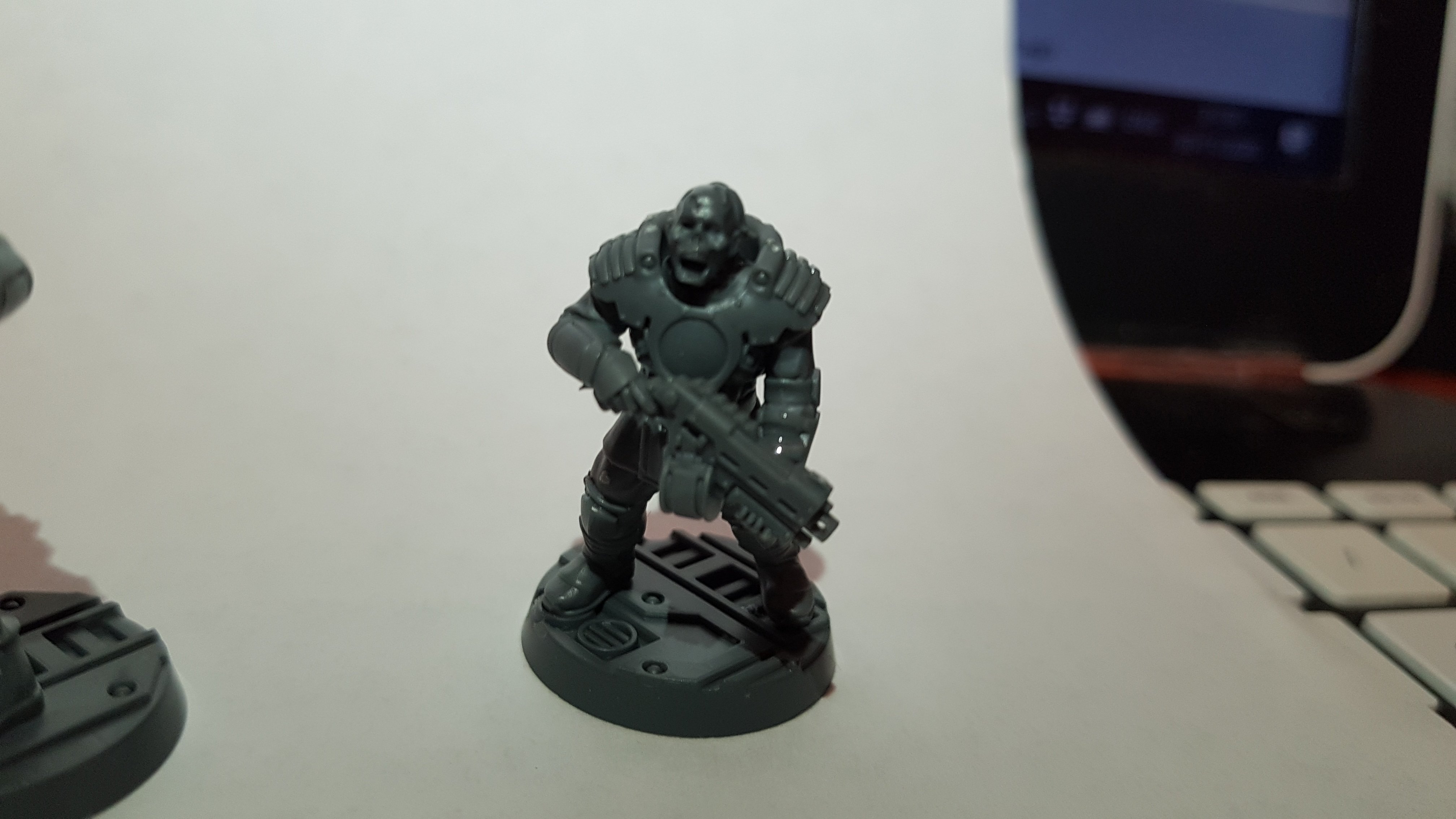 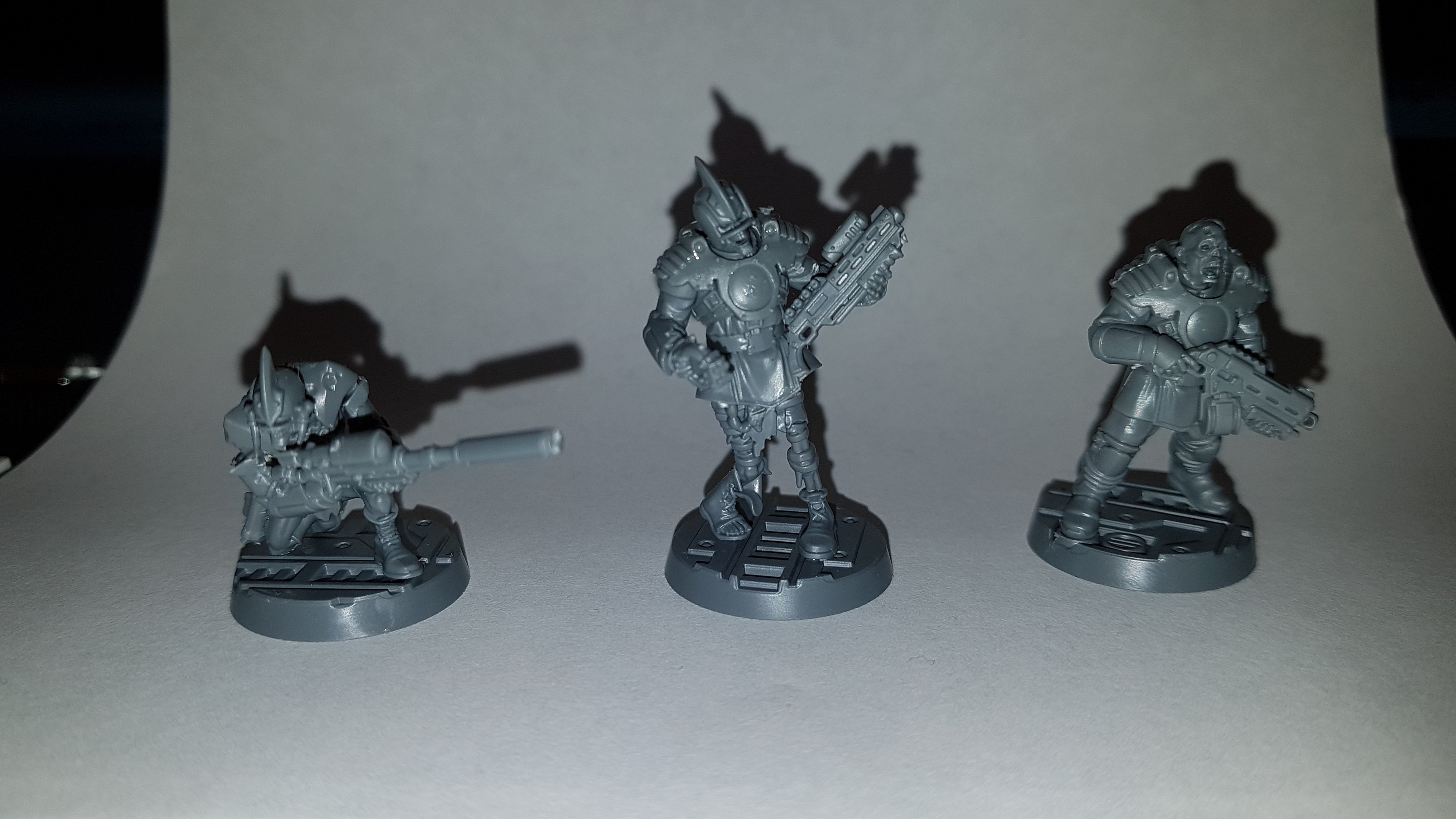 I miss the 1980s and 1990s, when you can admit you're a fan of Judge Dredd and other classic comics, WITHOUT getting dogpiled under the accusations you support "toxic masculinity" and other Twitter nonsense.

I hope to see your Dark Judges completed soon.

This is AMAZING, my own necromunda projects are inspired by Judge Dredd, can't believe I didn't think of this! You are a legend and I can't wait to see these guys completed.

Thanks for the kind words everyone. I really appreciate it!

I was a bit worried because I dont model much, and as a result haven't posted much here. Your kind words have made me feel great!

Here's todays models: Despair and Disgust. One is going to be my captain and the other is just a regular guy. I added some green stuff to help the snipers arms blend in.

I'm thinking of painting the armour as rusty metal and the cloth black. I'm in two minds whether I should paint flesh as the pallid grey tones from Fall of Dead World, or a more mummified brown. 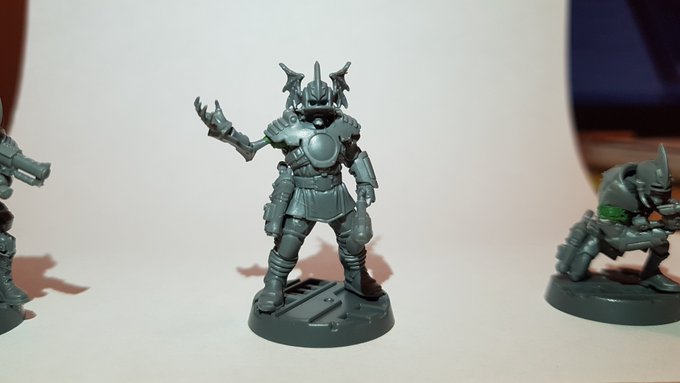 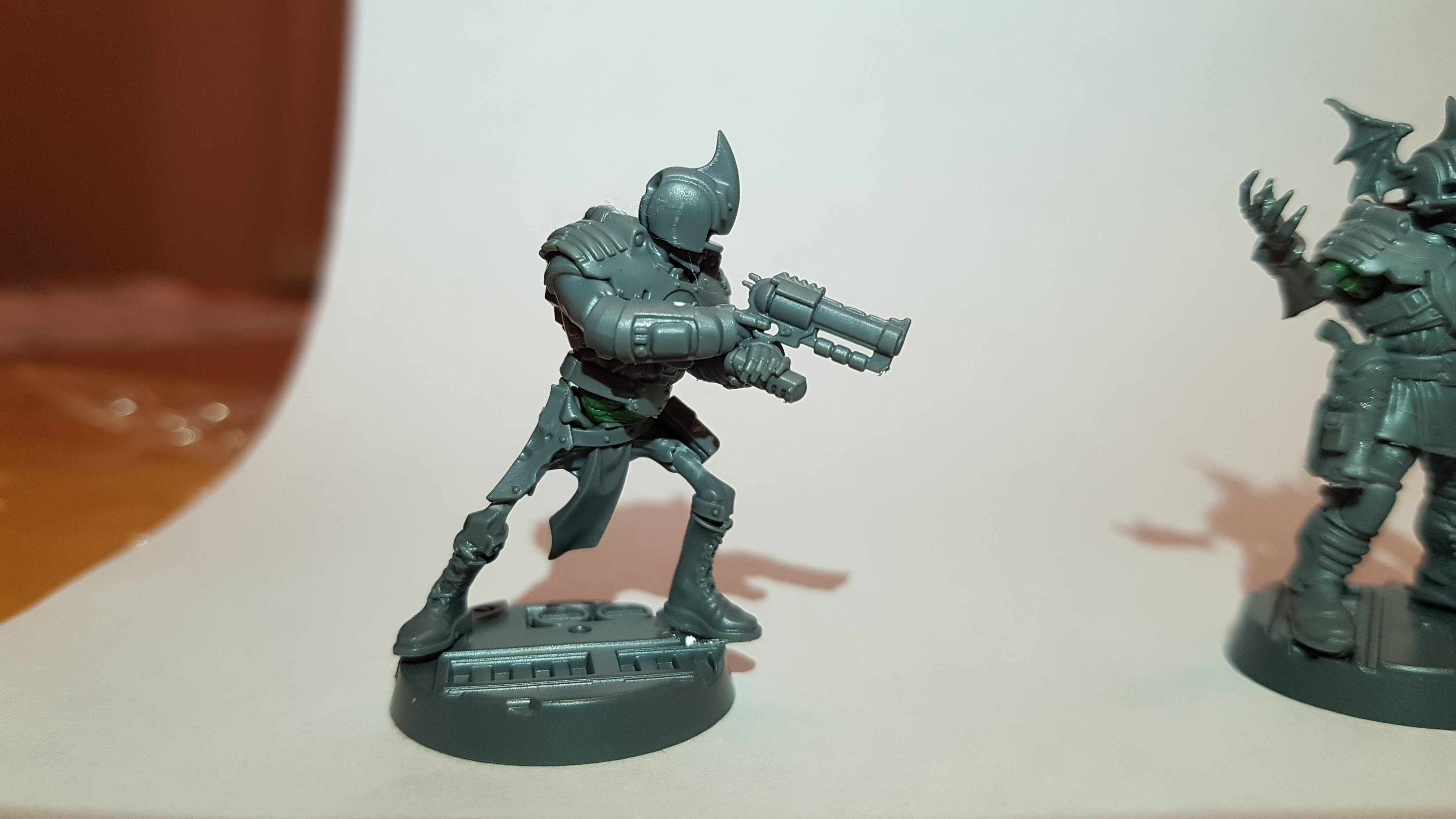 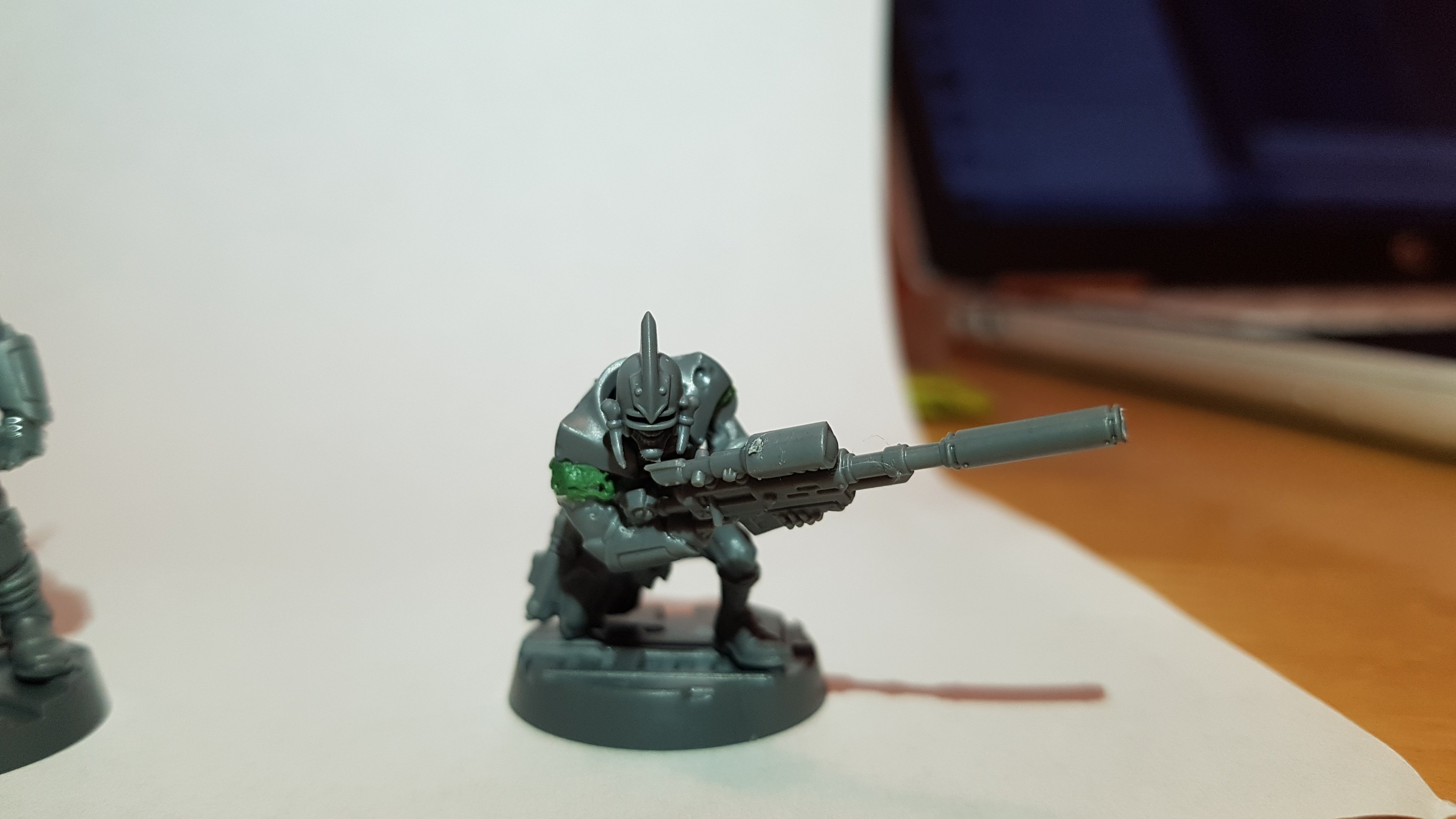 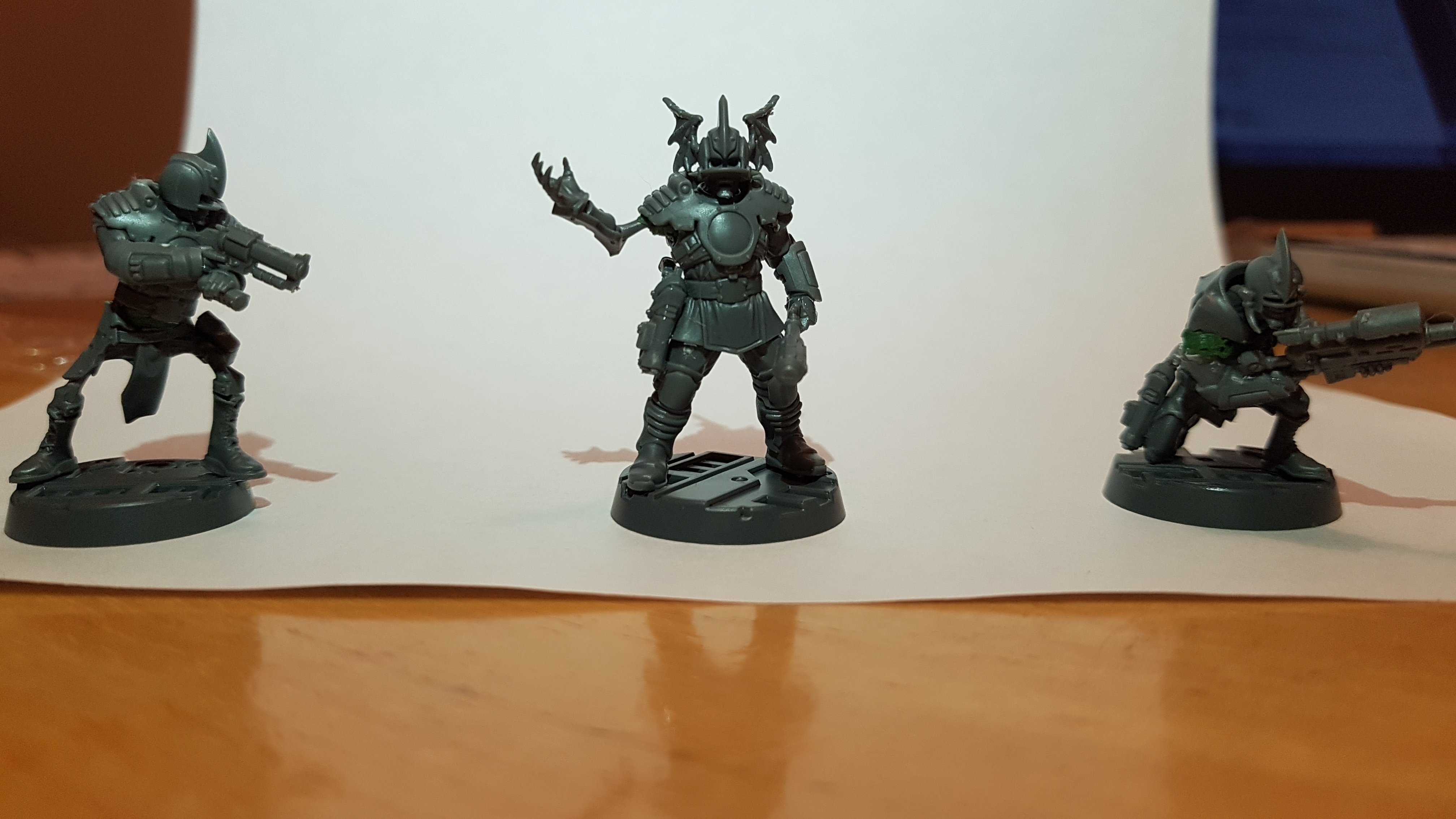 The models are well-posed.

I really like these! I'd be great if you painted them 2000AD style, then just make them super dirty and grimey

Today's model is a subjugator. The main basis of the model is a Blood bowl mummy who I think does a decent job of representing their extra armour. I didn't know what bits I was going to add to him and was thinking of ordering some. Luckily I found a nurgle grenade launcher and a really old rhino bit that looks the image of a riot shield. I feel pretty fortituous finding them. I'd rather have had them in the other hands to make it look like he was barging into something with the shield, but the grenade lancher was left handed and I couldnt figure out a way of making it fit the left hand without butchering it. I've trimmed down some of the waste since these pictures were taken. 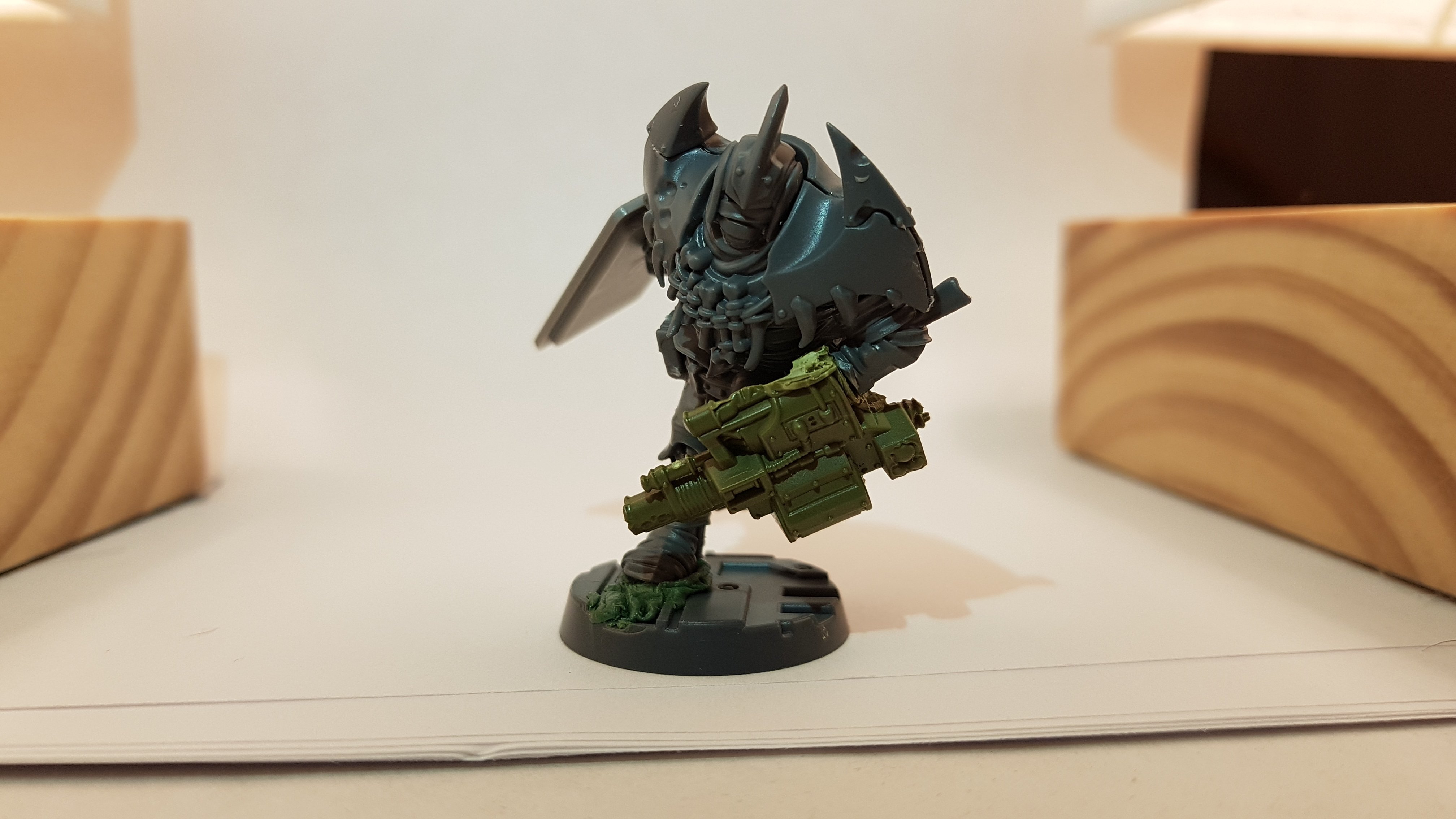 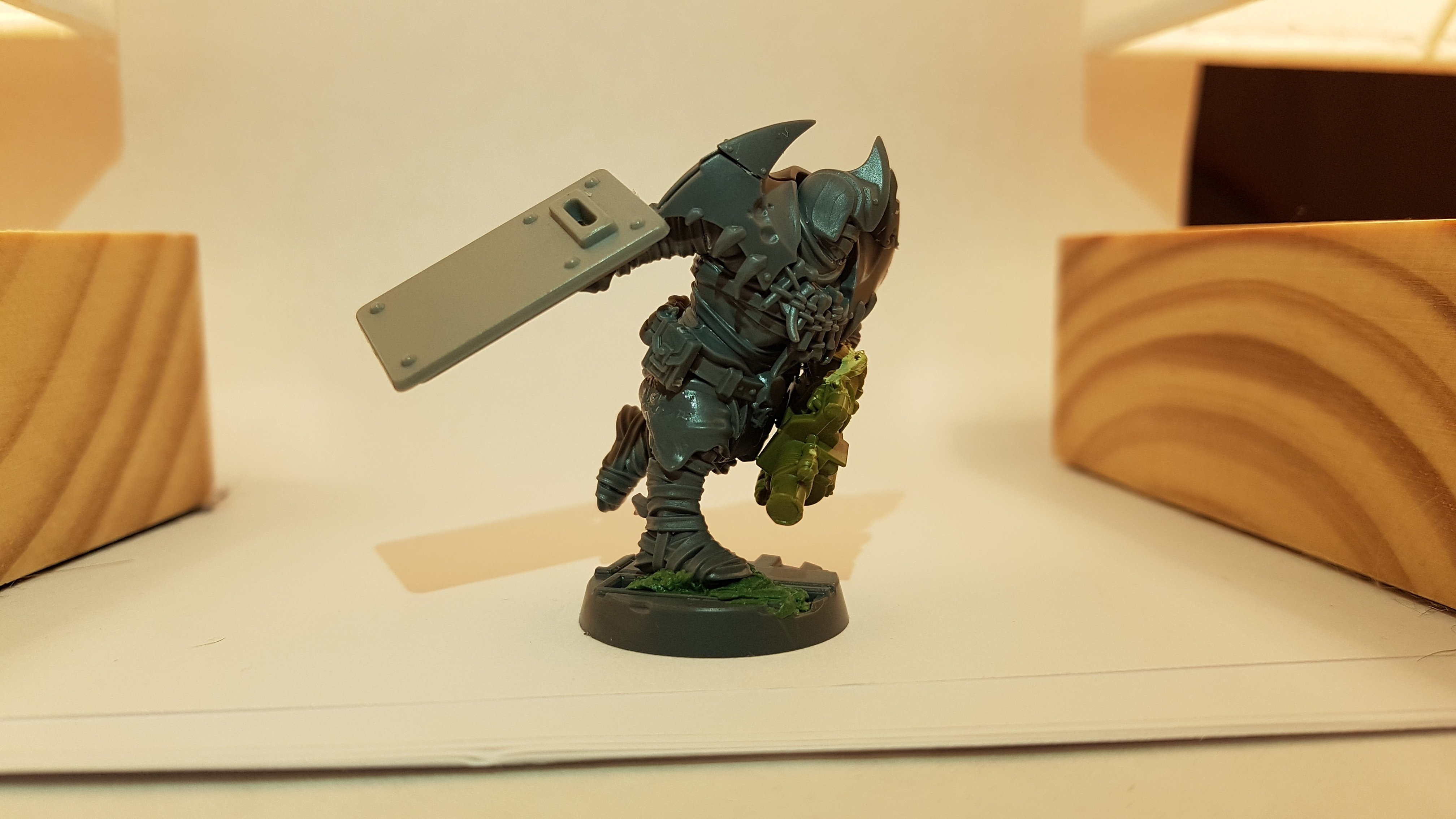 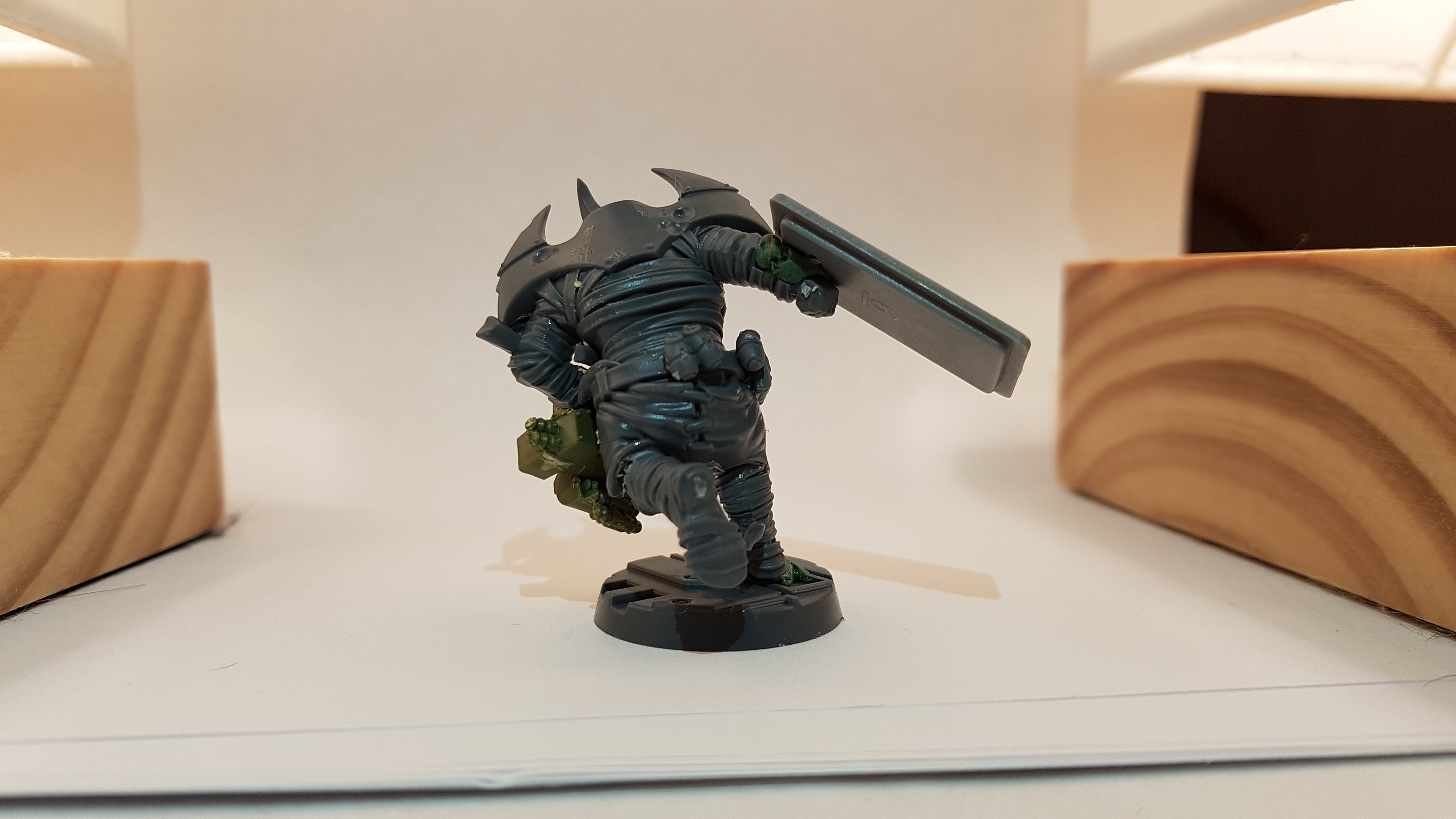 The Gang so far

Their background so far is their dome collapsed decades ago and they were written off as dead long ago. Unfortunately something kept them from dying, something unnatural. The forces of the dark powers? Medical archaeotech gone haywire? Some Xenos plague? No-one knows. All thats known is that people near their dome have started disappearing one by one. (i prefer to keep things nice and mysterious) 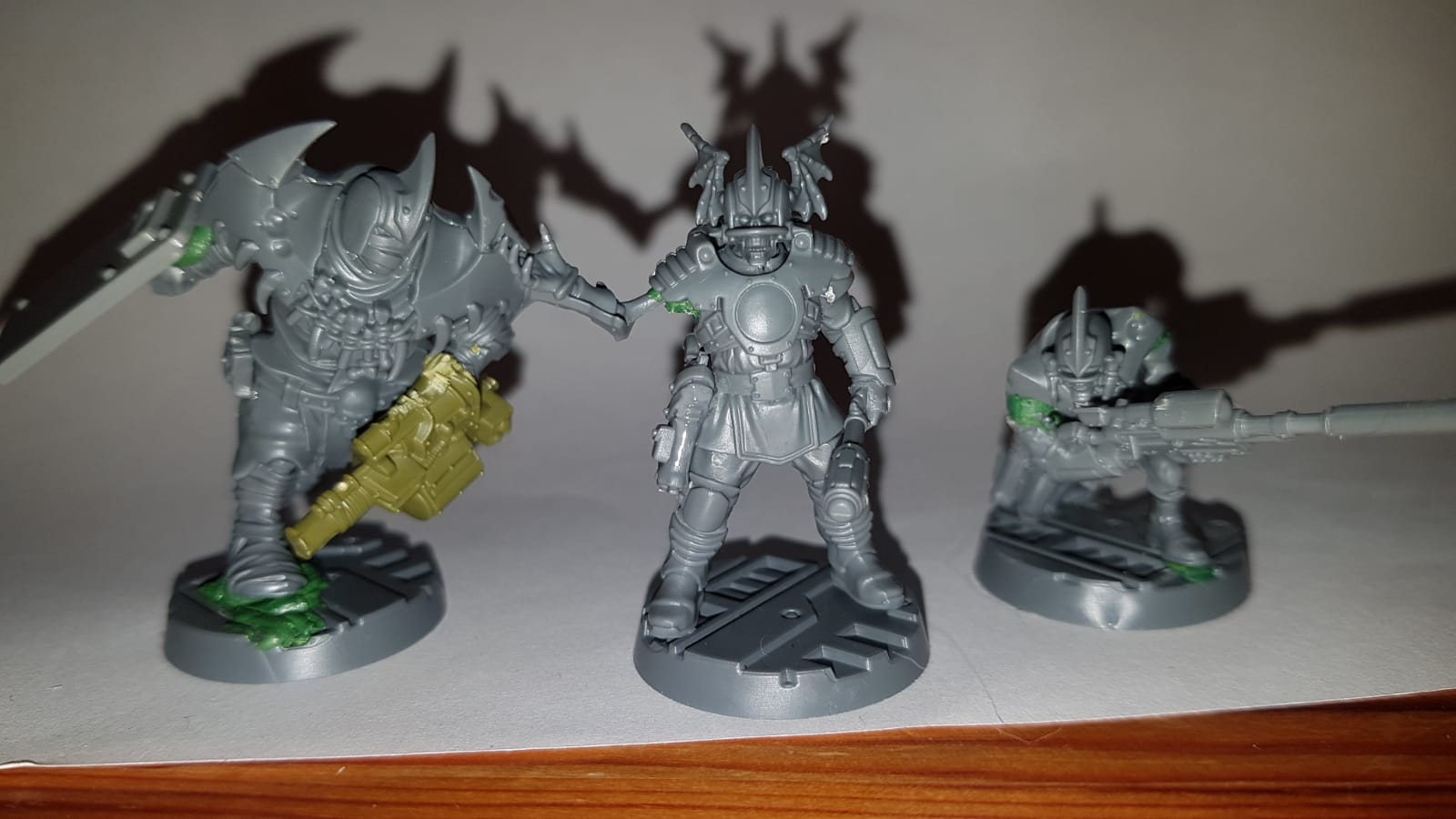 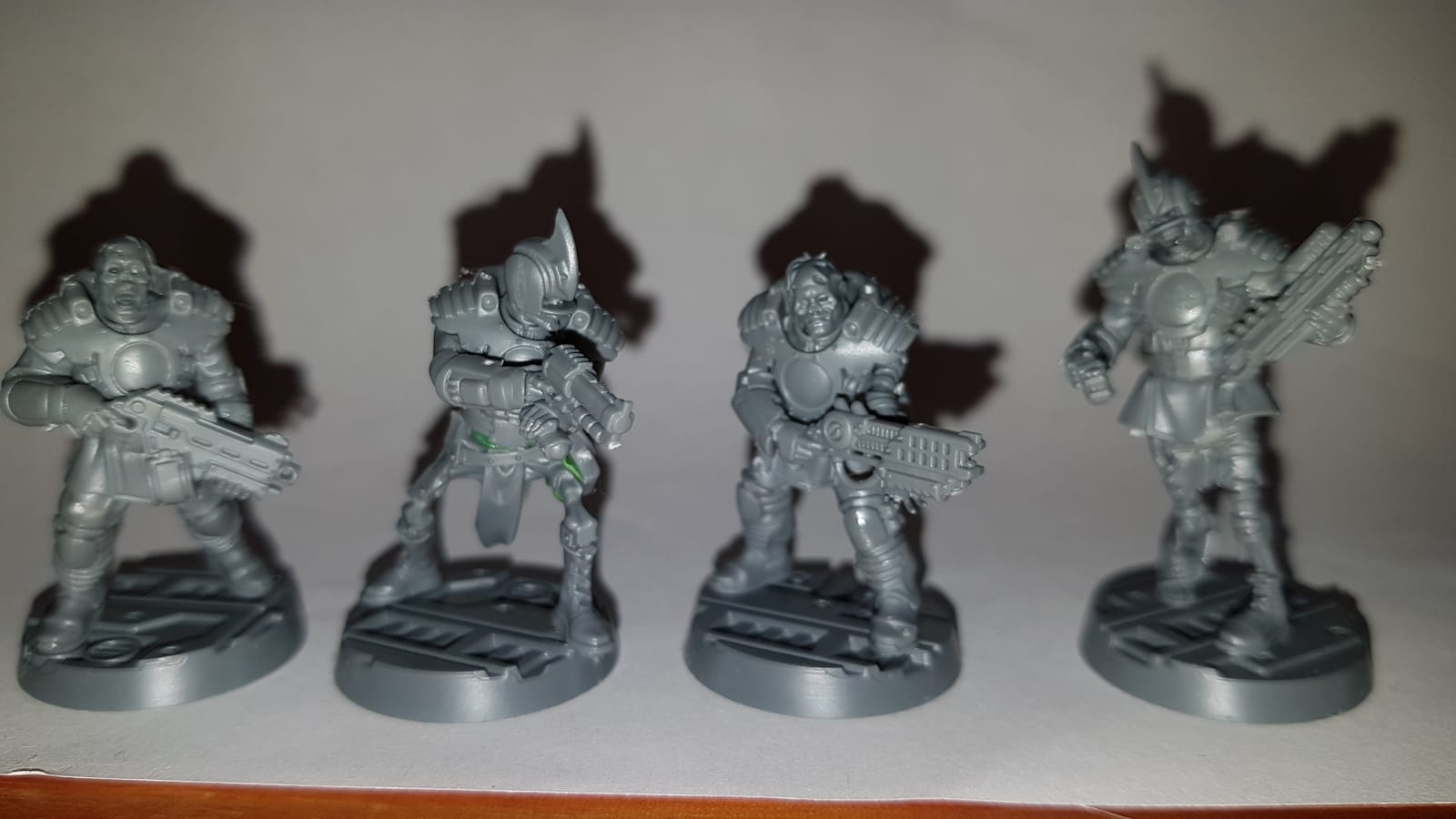 Rosterwise I've been building them on a "this looks cool basis". Any suggestions? I'm not too familiar with the current necromunda. The list so far is

That leaves me with 75 left over? Any suggestions or just another patrol man with dum dums?

Love the idea and concept.

Only critique: The Riot shield should be perpendicular to the arm, not straight.

So it should be sideways across his arm

Love the idea and concept.

Only critique: The Riot shield should be perpendicular to the arm, not straight.

So it should be sideways across his arm

Good point. I'll have a look at moving it.

These are excellent. Very inventive use of kits, and a really nice oldschool vibe. Looking forward to seeing some of these guys painted.

Thanks everyone for the kind words. You are really encouraging me!

When I started this I wanted to copy the general fall of deadworld vibe rather than specifically copy the dark judges themselves. Degenerate undead future cops is a fairly specific vibe without needing to copy the most famous ones. But somebody posted a picture of the big four dark judges and I realised I had a rams skull on an old WHFB skeleton sprue and this guy came about pretty naturally. I have one guy already that's very like Judge Fear- now I have a Judge Mortis. I dont have plans just yet to do a Judge Death or Fire but they would seem like natural next moves.

Impressive. Can't wait to see them painted up and killing!

Love the concept and what you're doing! This reminds me of when they first released the Zombie kit, and there was a whole White Dwarf article on combining them with the Chaos Space Marine kits at the time. Many good memories!

I'm going to under coat them today and maybe start painting them. I'm going to go with a with creepy gray skin on the flesh and bone to copy the deadworld strip.

I was initially thinking of painting cloth black and the armour as corroded metal. In dead world they have grey cloth and black armour (and khaki pads which I'm not going to do bar maybe the lines on the shoulders). Which do you think might look better? 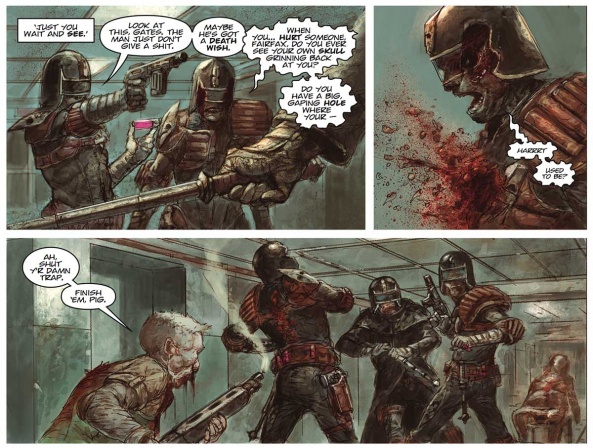 Here's the guys so far. I've painted the cloth grey and tried to paint a sickly white flesh that could be bone. It ended up more fleshy than pale but I'm happy enough with it.

My next step is to pain the large armour parts. The helmets will be black with a silver trim. I'm in two minds whether I should paint the armour as metal or black plate. Any suggestions? 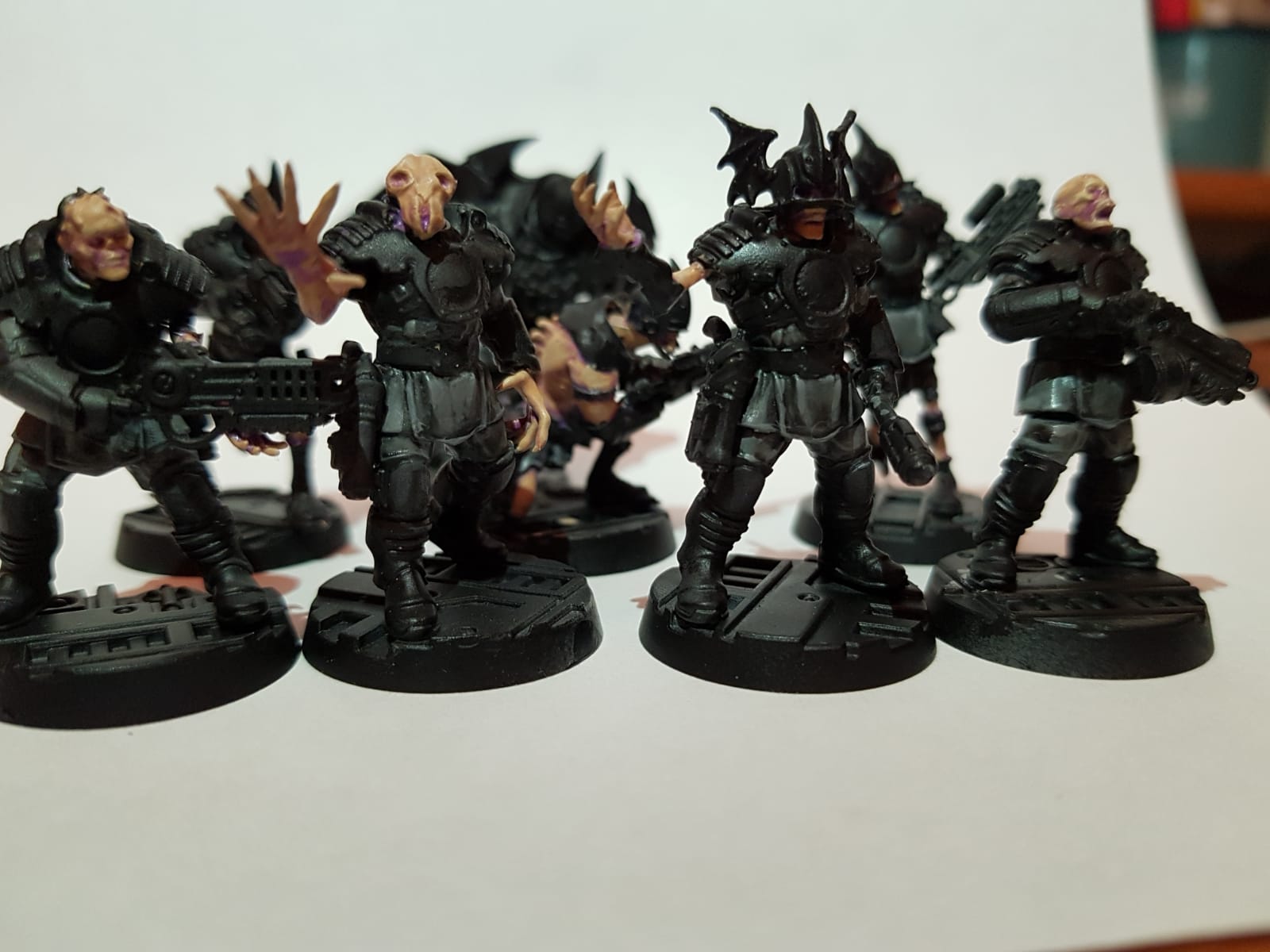 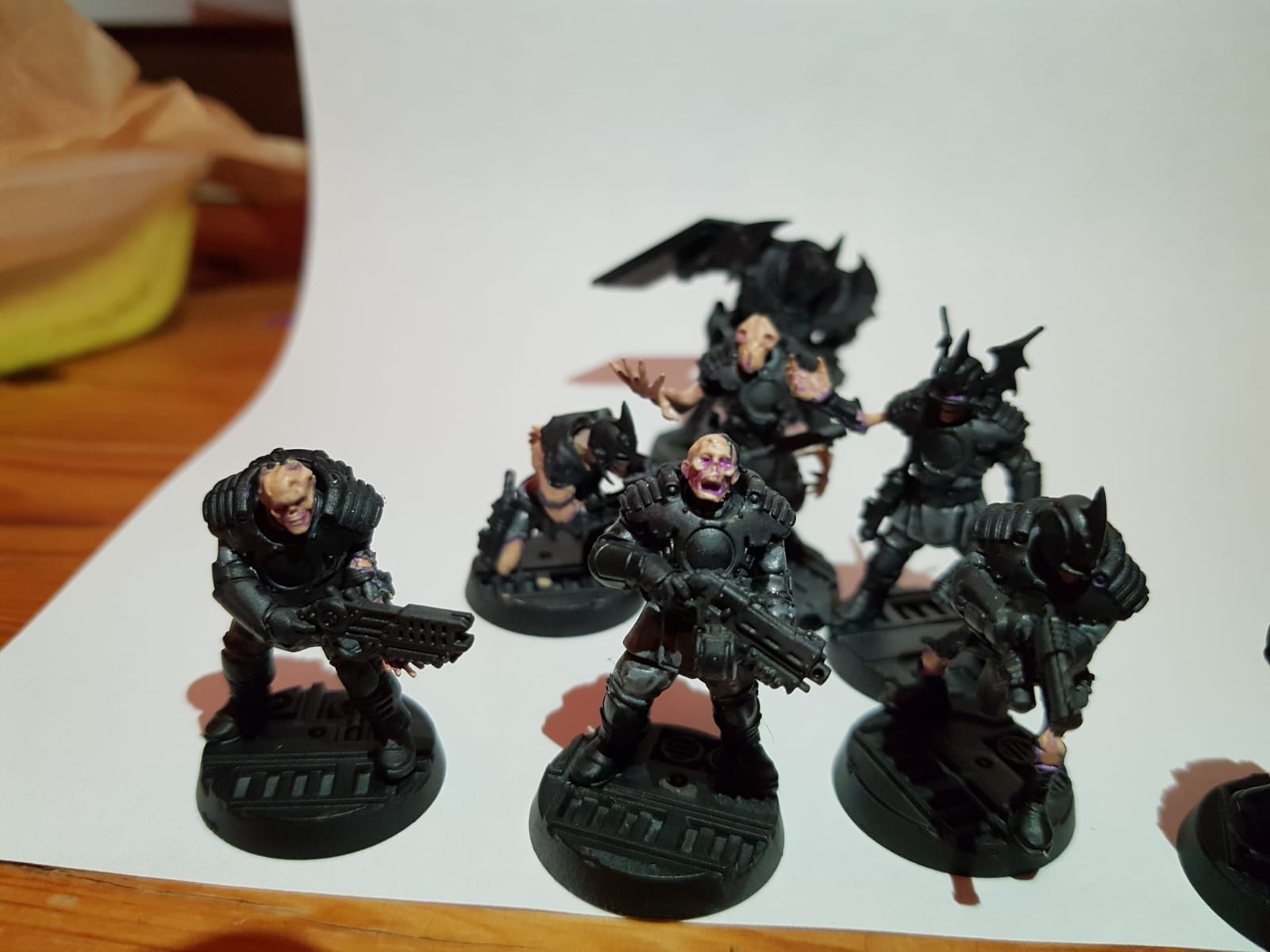 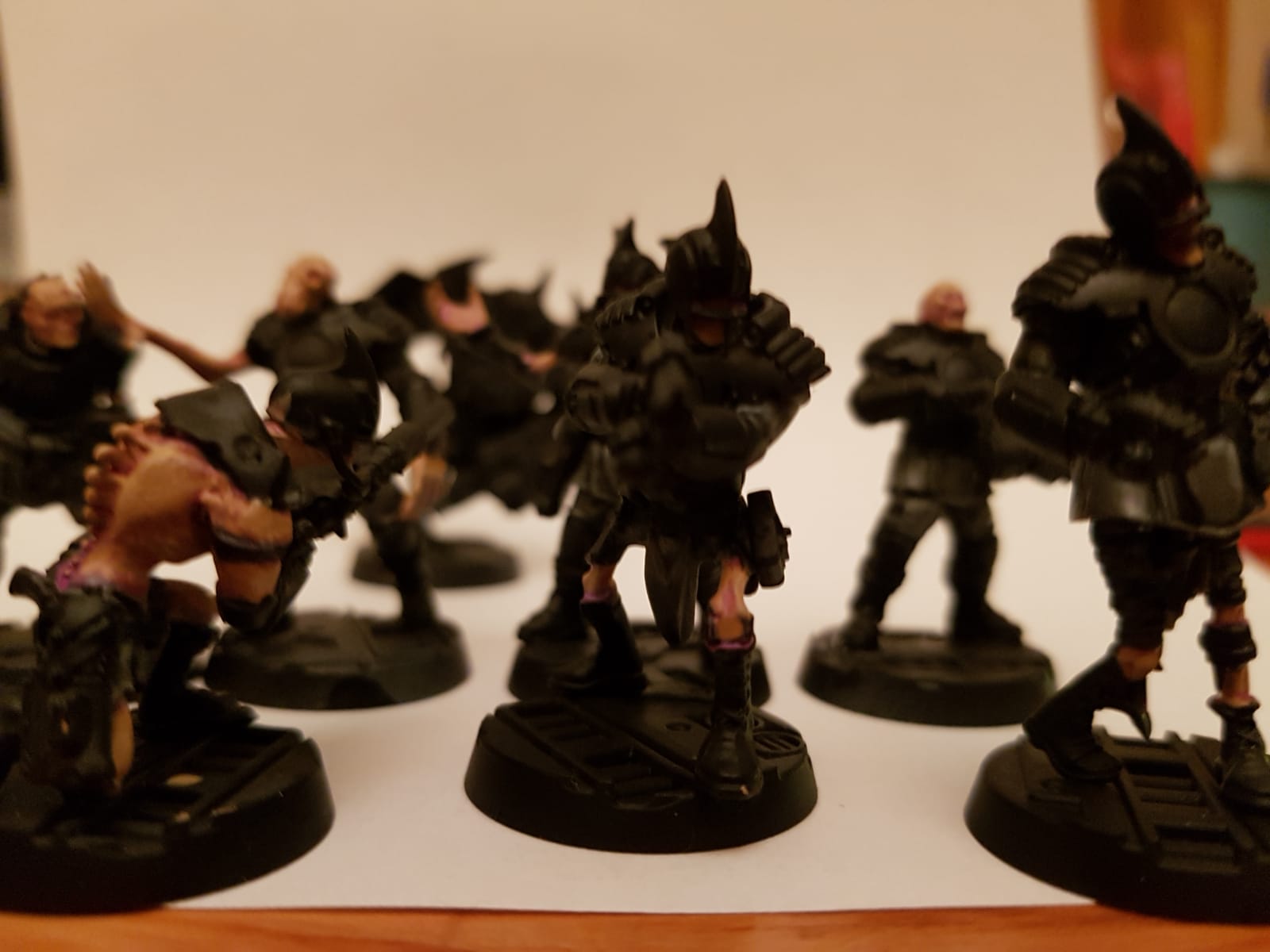 Your Dark Judges are coming along well. Where'd you get the sheep skull for Judge Mortis' head?

From the classic skeleton sprue. I didn't know I had it but when I saw it I had to try it out.

This project fills my heart with joy, keep up the good work.

Its niggling me too a bit but too late to do anything. I'd have rather swapped the weapon and shield arms around but it wasn't possible. Luckily the dead world judges are mutated freaks- so its ok if his proportions are off.

Also tagged with one or more of these keywords: Necromunda, Enforcers, Undead, kitbash