The Royal Awakening: Ceremony of Completion

At first there were few but in the end many.

The last three and a half months have seen tens of thousands of (points in) Necrons rise, emblazoned in the colours of their Dynasties and ready to reconquer a galaxy rightfully theirs! Our foes bask in blissful ignorance of the swift death coming to them at the hand of mighty Phaerons, who reach out empowered by the will of the Silent King and reinforced with new machinations of war to sweep away those who would think to claim territory in our domain! With these awoken armies none shall stand before the might of the Necrontyr!

Congratulations to all of you for completely blowing this event up. 28 frater pledged to paint some models over the last few months and out of a total 54 Vows only 5 were left incomplete at the event's close (

Holy smokes that's a lot of painted models. No matter how much you contributed I'm truly happy that we all got to have some fun painting models together.

Now for the fun part! All the pretty badges!!!

Three people ascended to the level of Phaeron.

Nemesor Tyriks at 2,140 and 01RTB01 with the highest total of the event at 2,785 both completed Vows during the build time of the event, earning the Scarab award on their badge.

One person gained the rank of Overlord.

Anticontrarian at 1,300 and Halandaar at 1,495 (seriously, did I miss 5 points counting??) both completed Vows during the build time of the event, earning the Scarab award on their badge.

Fourteen people have served their Dynasty well as Royal Wardens.

Daimyo-Phaeron Lenoch at 820,  Triszin at 75, and NTaW at 75 all completed Vows during the build time of the event, earning the Scarab award on their badge.

Congratulations to you all and thank you for being a part of the Royal Awakening!! Please feel free to post up group shots and glamour pics of the models you painted during the event. There was such comprehensively splendid painting done by you all it would be wonderful if this thread could be a shrine to your work. Let us revel in the glory of painted models!!

First and foremost thank you for the organization, dedication and counting! Sesame Street would explode with such numbers 😁

It's been a great event and I've hopefully made amends for my poor shown in the drukhari equivalent!


(How do we add our badges to ourselves?!)

Huge thanks again, it's been a blast

The event was a blast! Certainly was up to my neck in models to finish (I still have a substantial portion of my backlog unpainted, but those immortals were sitting in my pile of shame for...god, when did kill team/Forgebane come out? At least since then), and down to the wire in completing them! My favorite part of my dynasty scheme is it’s simple for troops. Spray, weapons, shoulders, chest and eyes, nuln oil. The most difficult part of my legion vow was deciding colors for the Royal Warden—I ended up with choosing my minor lord scheme, with bronze shoulders and cloak.

Other than my disastrous attempts at edge highlighting (I’ll do the sonomancer in that scheme, and then I’m done with it), I found the event quite enjoyable. If I’d finished my canoptek vow earlier, I probably could have made Lord level and done the skorpekhs et al, and maybe the deathmarks I have that need painting, but that didn’t happen, so alas.

I’ll have a rough battle report from the conclusion day that I fought with models I painted during the event, but tis late now and I should return to the crypts.

(01RTB01, you should be able to right-click the badge, select the copy image link, and then paste it into image tags in your sig, ~I think~. If that doesn’t work, bug Bro T, he does BBC code and may be able to point you in the right direction and/or send you to the BnC101 page.)

Dosjeska: But then again we are Iron Hands, we will use a hammer as a scalpel. Ace Debonair: Loyalists bow to The Emperor, Heretics bow to their Dark Gods, but everybody bows to Captain Semper. Brian Blaire: Bolted for emphasis
There are 4 boxes to use in the defense of liberty: soap, ballot, jury, ammo. Use in that order. -anon [][] Laus Alit Artes-Praise Nourishes the Arts

Thanks for everything. Event was a good push to paint up some models.

I wanted one more vow but it's still impossible to get the more popular models near me (Ontario Canada). Had to order my codex from Quebec.

I did also get a recruit starter set and some tomb blades.

To add the badge to your signature I believe you have to be on "full version" view via mobile or just be at a computer. Click your avatar in the top left and select "my settings" then in the new screen that shows up select "signature" from the menu down the side. Once you're there just post the correct badge image to your signature in the same way you would post a picture: paste the URL either into the popup when you select the "add image" icon or paste the URL between tags.

Stupidity, I just saw your post. I'm in Ontario as well and there's lots of local stores with stock around my area, maybe if you shoot me a pm I could help you locate items in-province?

Hey I have a badge!

Thanks again for organizing this event and keeping people motivated, it really was awesome! As I mentioned earlier, I've spent more time painting these past few months than in the past 20 years, and that's in big part because of this (current events also helped, obviously). Now I can't wait to play with fully painted armies.

I'll try to take a good picture of my complete army (painted and mixed) tonight.

It's really nice as well to have a solid core of a force together, as such I can add stuff at leisure rather than having to add a load. Next up: szarekh and 20 warriors followed by an ark, wraiths and command barge

Exactly! Once I'm done with my current Immortals and Cryptothralls, my core should be done. Afterwards I have to rebase (finally received my new bases), and then I have a neat conversion project

Oooh what you planning Miek?

Thanks for running a great event! It's been a real inspiration for us other xeno forums.

My 1,100 points of Necrons are made up of one complete Indomitus set and another set of 3 Skorpekhs. Here's the haul in all it's glory:

I'm going to continue working on my Necrons. Already have two more cryptothralls ready for basing and another Skorpekh Lord past the airbrush stages. The simple, quick scheme I've developed for the Kharezt dynasty is helping drive my hobby during this later stage of the pandemic; hopefully I can soldier on, and get an army ready to play real games of 9th edition with sometime in the hopefully-not-too-distant-or-too-dystopian future.

The last Skorpekh Destroyers even made it to Warhammer Community's Hobby Roundup! These were my first models featured, so it was real exciting.

I really enjoyed doing this.

This really motivated me to paint up my Indomitus Necrons, which would otherwise have collected dust.

Here is a glory shot of my valiant effort- 1442 points (counting a random extra warrior) of Necrons.

An unstoppable tidal wave of metal! 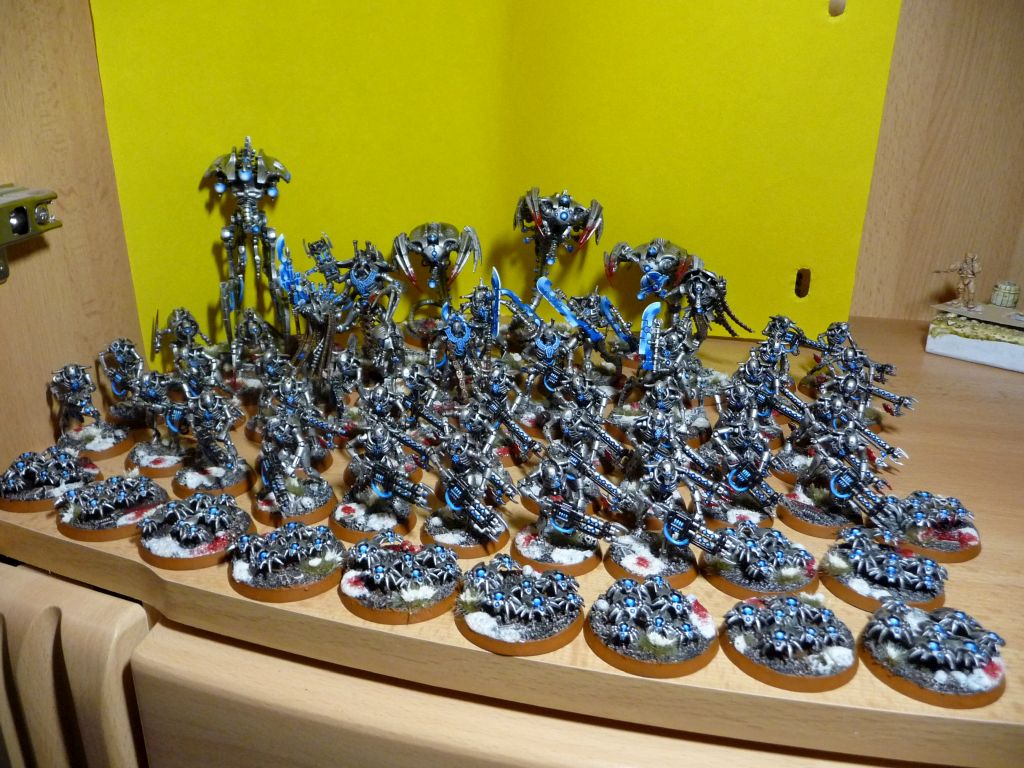 Since I am a huge Whovian, I painted them up in Cybermen colours.

I especially enjoyed working on the Technomancer and the Wraiths which are really awesome models. 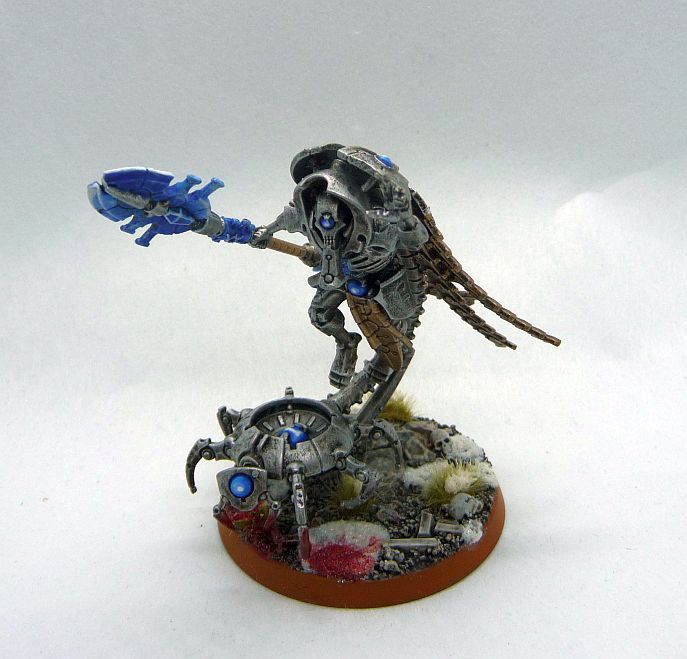 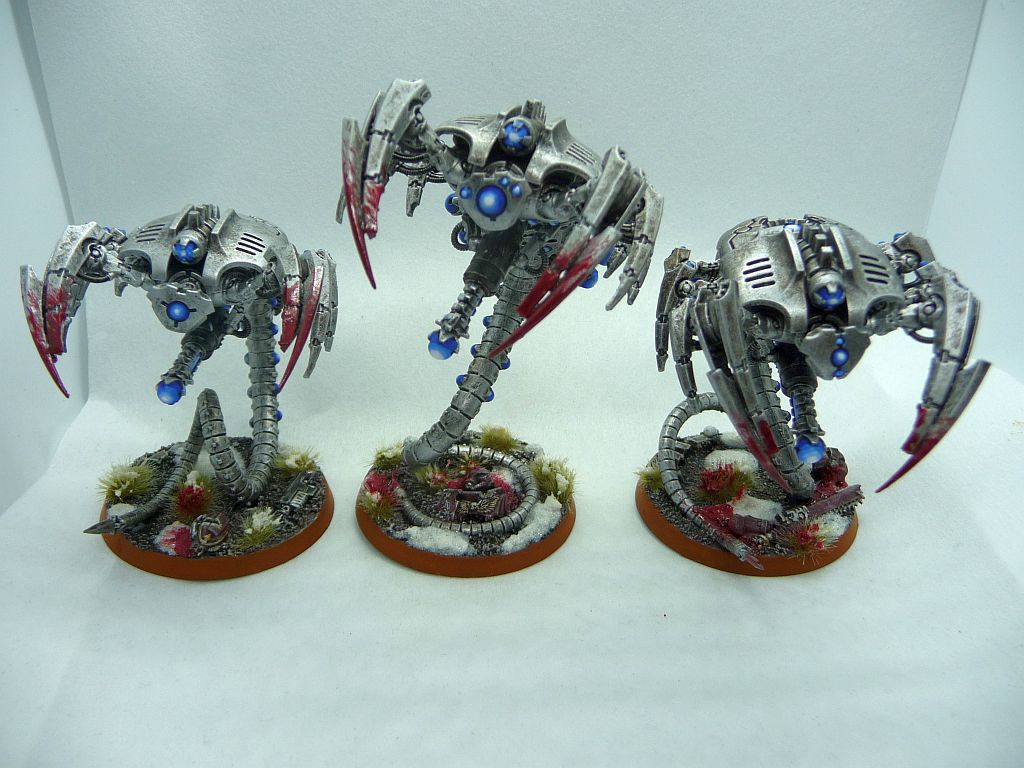 And those Destroyers were not bad, either. 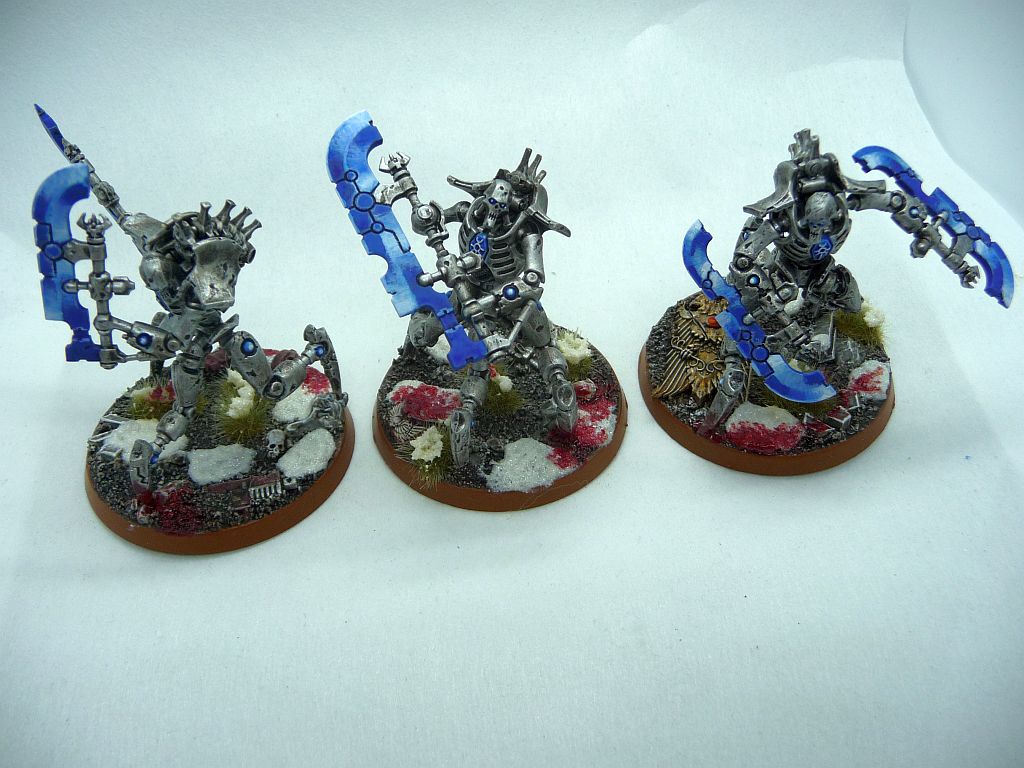 The Necron Cybermen are well done, Valkia the Bloody.

Oooh what you planning Miek?

Nothing major: A fitting overlord for the Tohakh dynasty! I've started modeling a gravitational beam emitter (closer to Sanakan's than Killy's in Blame!), gathering android heads and thinking about the final composition:

Still in the early stages though, I want to finish what I started first.

Edit: Also, here are my painted metal dudes (including a few WiP). The peachy destroyer in the back is both the first proxy I modeled and mini I've painted since the 90's:

Thanks bunches for this. Helped me thru some bad stuff. I hope youll do another real soon.

Sorted, inadvertently did my Avatar too but hey ho

Thank you for organising!

Anticontrarian at 1,300 and Halandaar at 1,495 (seriously, did I miss 5 points counting??) both completed Vows during the build time of the event, earning the Scarab award on their badge.

I made it 1,495 too, bit of a shame but I hadn't really thought about what my total was going to be. Anyway, thanks for running the event, it really helped motivate me to get my force painted for the table much quicker than I would otherwise have done! Thankfully that motivation is still there, so here's a WIP of the model I was hoping to include as my final vow before I ran out of time:

Thanks for hosting the event! It was a lot of fun to have something to work towards, and know it was part of a group effort.

Good job everyone on your painting!

Thank you for the event. It allowed me to get a scheme out of my head and try something different.

I'm really glad that everyone enjoyed themselves. This was my first time hosting an event and I still can't believe how positive a response there has been, how many people got involved, or how many points in models were painted! Wild.

You're all awesome and I hope everyone enjoys their freshly painted models!

Well done Everyone, Great to see the First big Necron Event was so well received