The Scions to me were/are a mishmash of a lot of surface level aesthetics: clockwork creations so intricate as to appear living, the blurring of the line between living being and artificial creation and as in all of my AU projects a healthy dose of far future scifi knights.
Aysen Craw is designed to be a primarch out of time, someone born too early or too late, first found but not designed for the brutal conquest of the galaxy, whimsical creator of great works of art and terrible weapons in equal measure.
He ends the Great Crusade one of the best suited for the golden age that is promised but is reduced over the wars that follow to both a far more potent weapon of war and a lesser man.
The Scions themselves mirror their progenitor in many ways, creators and artisans, not with direct goals but for the sheer pleasure and act of it. As part of their role as the foil to the mechanicum, Craw would build and develop technology unique to his homeworld, constructs that would be part automata, part psychic tool and thus immune to much of the cybertheurgy of the mechnicum.
This 'sulite' based technology would slowly pervade the Scions and their closest auxiliaries over the course of the Great Crusade and the start of the action will see them both augmented in many ways and aesthetically very ornate and non uniform.
The plan is for Craw to be reduced to the brink of death after refusing to submit himself to judgement after spurning Kozja, and whilst his physical form lives on he begins to enact his will through a Golem war-form of his own design.

I'll leave my rambling here for the moment and continue to update as i go. 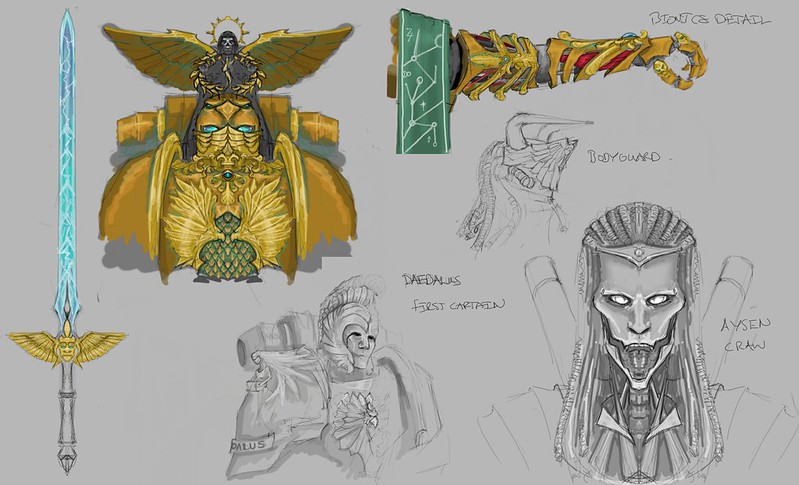 to me the best descriptor of the aesthetic is mediterranean basin, vague as that might be, though i picture them ethnically as Persian/Iranian/Egyptian

The Crusade version of Craw here was drawn when Craw was conceived as female, but the overall aesthetic is similar. To the right, two examples of automata are displayed. 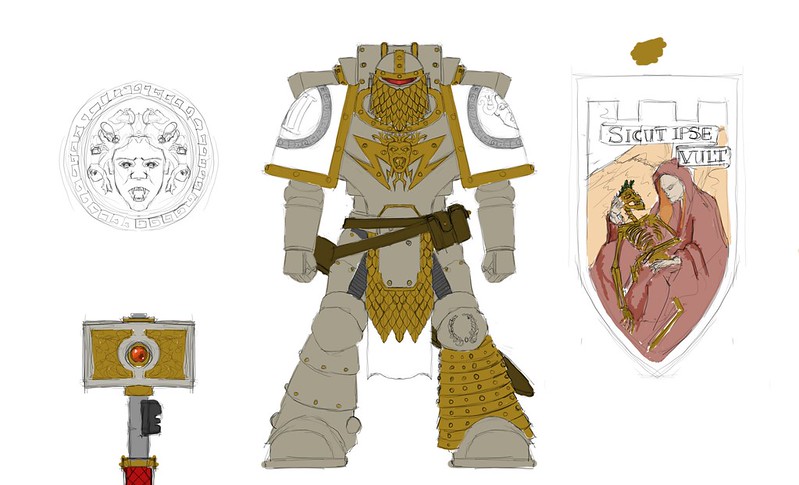 Whilst i currently lack a definite early crusade name for them, I imagine i'll go for something simple and obvious like 'the Medusans'

this is meant to depict a veteran post 'tempest galleries' 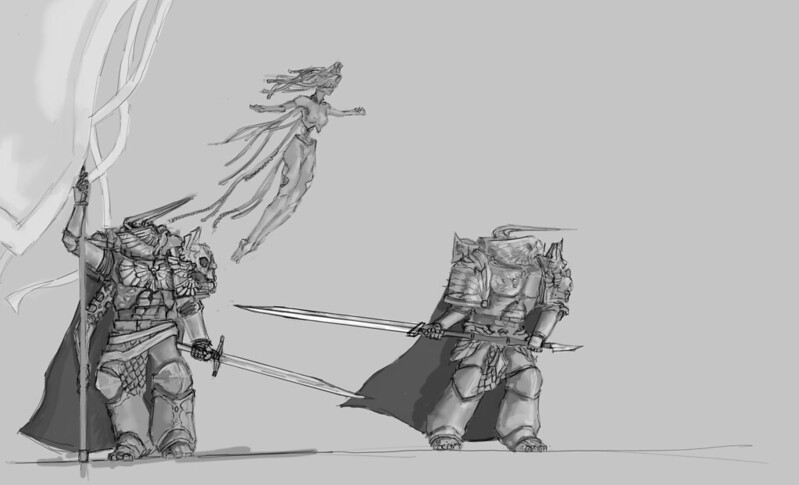 Craw's Bodyguard late crusade, note the beginning of divergence from the human norm with the third artificial arm. Also pictured is one of the Golems 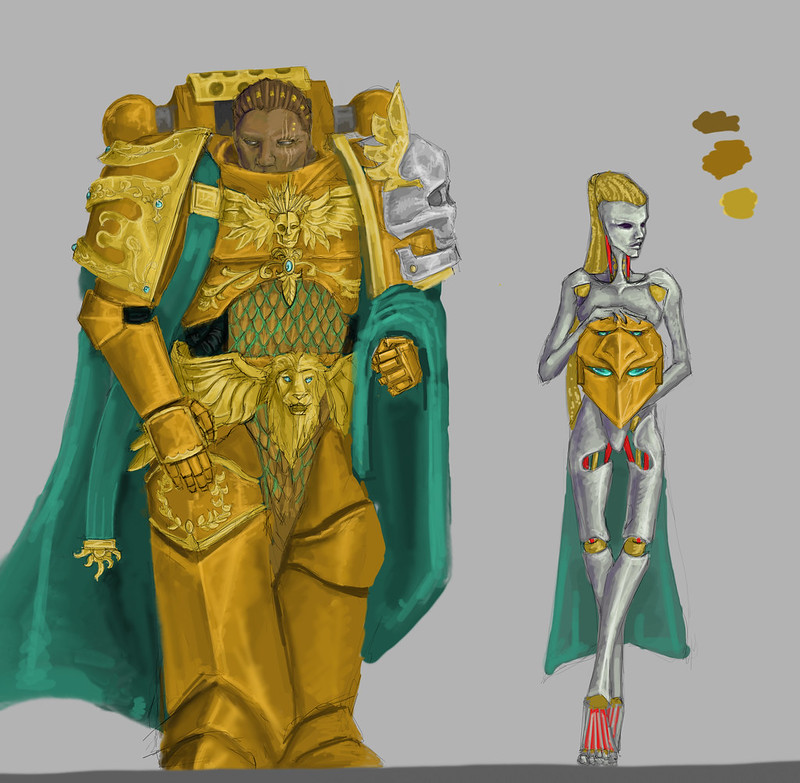 A centurion level Scion, Golems are a mixture of inbuilt personality commands and actions embeded psychicly in Sulite, then also have the capacity to come under direct control of their Scion creators 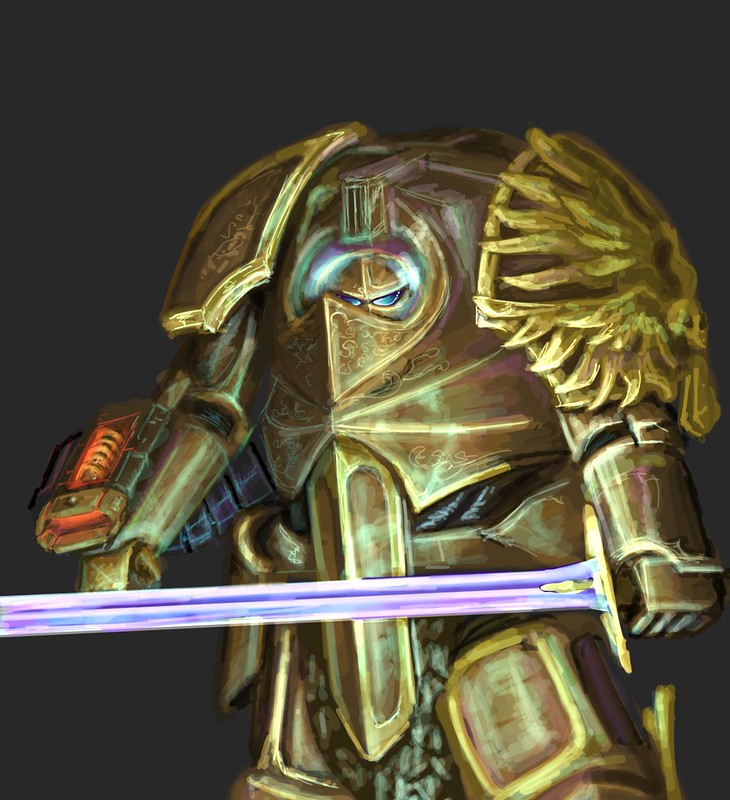 A MK1 armour equipped Scion, the colour palette of the Scions is intended to be layers of copper, gold, broze and silver, the layers of ornamentation and modification building slowly until they start to look almost like organic statues rather than humans in armour. 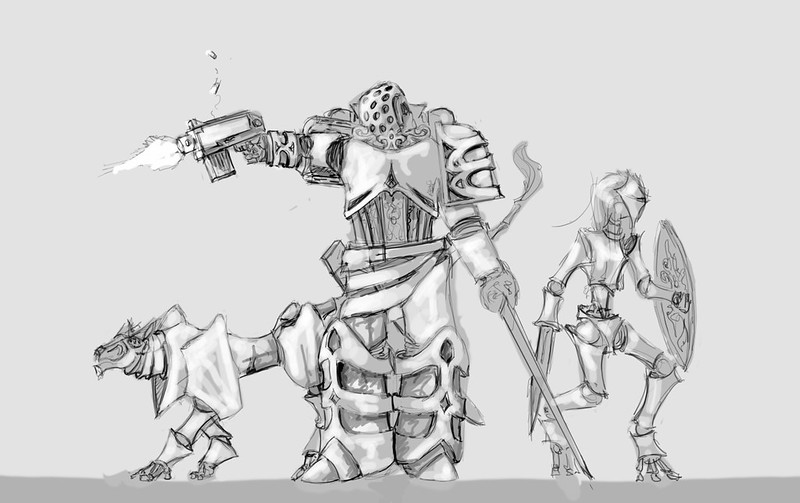 A mid crusade concept, a standard line marine, possibly sergeant or veteran member. As compared to the higher ups, golems used by line members are cruder both due to the marine's personal skill at managing them and the resources they have acess to.

All art is done by myself 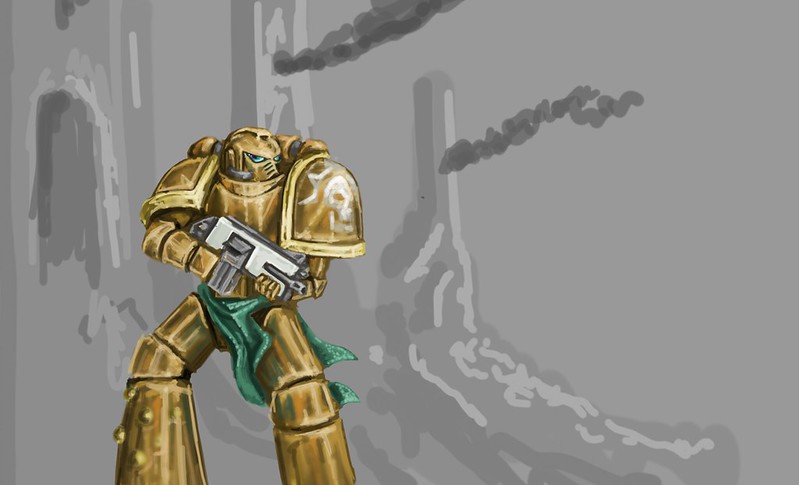 today's practice, i usually heavily alter my marine's form and shape from standard power armour marks but thought id practice and do a Scion in fresh MkIV; and whilst i spoke previously on liking the armour aged and worked on, super polished is starting to gain on me.

Ananke Automata/Golem, Scion Forgelord and the Sigil of Ananke

Ananke was a minor forgeworld found close to Silvarion Sul, it's population reduced to operating a fraction of the world's existing infrastructure and forges as their number diminished over the long night. It was Craw and the Scions that would deliver Ananke from its isolation and the predation of the Xenos that now inhabited the abandoned space staions and asteroid belts, and it was to Craw that Ananke swore allegiance. Thus when Craw was sent from the Emperor's side, it was Ananke that was chosen as the forge that would spin the weapons and golems of war for the 12th.

By the end of the Great Crusade, Ananke was a shameful blot on Mars' roster, but grudgingly tolerated thanks to both Craw's protection and Imperial pressure; the world would become a hotbed of fringe practices, driven on by Craw's patronage and access to sulite based technology and whilst not offficially recognised by mars, it would be Ananke's name on many sub-patterns and fresh designs seen in the Scions' armoury.

Ships of the Scions 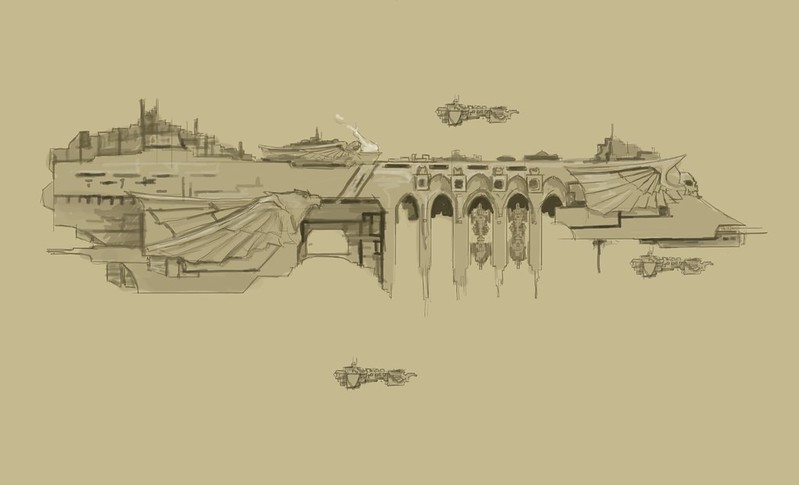 The Charon-class is a battleship sized vessel designed in concert by Leonfrik of the Anvil Bearers and Craw. It's most noteworthy design feature being the 10 bays along its undersized that would initially be intended to carry hunter-killer vessels: frigate sized vessels that traded warp capability for extra firepower; but as the class was brought into service the bays were used in the transport of various other tactical options. Some commanders would transport armoured supply vessels and dropships for rapid relief and deployment; others automated dumbfire torpedo pods, crude loadouts that were little more than vast repositories for ordinance; others still would carry mines or defence stations and rarer cases vast orbitally deployable redoubts that could be cast from low orbit like some crude hammer and within moments be a serviceable fortification that would span kilometres and shelter thousands.

The Charon's secondary armament varied: all would be equipped with long range lances, and lack many of the batteries available on ships of a similar tonnage; where Craw and Leonfrik differed however was on the space allocated to hangar bays and the facilities for fighter craft, the Anvil's so often replacing them for increased point defence and thicker armour.

Deep in the Charon's hull could be found simple manufactories and forges, the facilities required for the maintenance and retrofit of fleet vessels and the production of common weapons and ammunition, indeed when it had emptied its bays, a Charon could accommodate the bulk of a cruiser sized craft for large scale repair. Deeper still, vast command and control capabilities allowed the Charon to act as co-ordinator and force multiplier for both fleet and ground operations.

The Pythos - Flagship of Aysen Craw

The Pythos was initially constructed at the Jupiter Shipyards before final outfitting was moved to the yards at Ananke and overseen directly by Craw.

Vast and uncomprimising, the Pythos would evolve over the course of her service playing host to many of Craw's inventions and creations, until when the 31st millenium dawned she could be found bedecked in statues and artistry, her guns barely recognizable as being of standard pattern, her armour guilded and engraved and a vast spine added across her lower span. This spine would be a single continuous chamber from front to back and hold within it wonder after wonder spread throughout artificial gardens and bio-engineered creations, the inhabitants of the spine all artificial golems who's complex personalities were dreamt into being by Aysen himself. 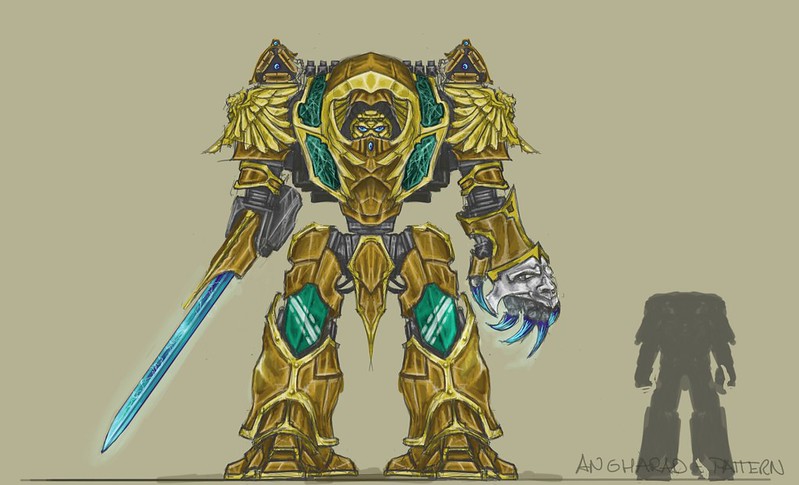 Ozymandias, first of the Angharad, veteran of the tempest galleries, Aephani of the Argent Scions

Early in the Great crusade, after departing the emperor's side, Craw would send a detachment of Scions to investigate rumours of a fell machine world in the south of the segmentum tempestus. The force, consisting of the newly inaugurated 5th Brotherhood would make all speed, racing the mechanicum who themselves hoped to be first to make contact or at least lay claim to any ruins.
Whispers and half truths guided their path, spured on by the trail of once mighty and advanced machines that implied the existence of a creator.
On Gamma-405-1 the remains of an atmospheric processor at the heart of a pleasure city bore a horned sigil
In the asteroid belt of Insolus 6 smoothly ribbed tunnels led to dormant mining constructs of intricate design, the horned sigil stamped on every one.
Rumour and glimpse after tale and folklore would see the 5th translate out of warp space in a system narrowed down as the final destination, all arrows pointing there and imagination crafting a bejewelled eldorado of technology amongst the crew and shipsmen.
Instead the wreckage of long dead stations and orbitals would give way to the broken wreck of a planet: split and sundered, its parts heaped together in a complex orbital dance as if some god had broken it by accident and hastily pushed it into a rough form. Most artificial constructions were lacerated and burnt by war or stray debris, blue grey metal morphed and welded by what was estimated to be millenia of brutal celestial interplay.
The only reward for their odyssey would be the wreck of a elongated warship, the vessel itself broken beyond repair and destined to float in a wide irregular orbit, its position an indicator perhaps of an attempt to flee, or perhaps a final push to bring reinforcements. Within the Scions would find two-score suits, perhaps knight armour or automata, perhaps exoarmour or orbital shielding from the broken world behind.
These suits returned to Aysen Craw would form the basis of Angharad-pattern dreadnoughts, individual works of art, one completed and outfitted only when its armaments were forged or found and a suitable pilot named for it. Of the suits found, only a dozen have been completed, and as to whether Craw lacks the knowledge or pieces to complete the rest it is not known. As with many of Craw's personal projects, the artifice behind each varies in both the subtlest and most obvious ways, those suits that Aysen gifted to other legions, for recognition of deed or suitability of warfare, would baffle and fascinate in equal measure, each a work of art that stood alone in series, no two base suits the same and no two adaptations exact. 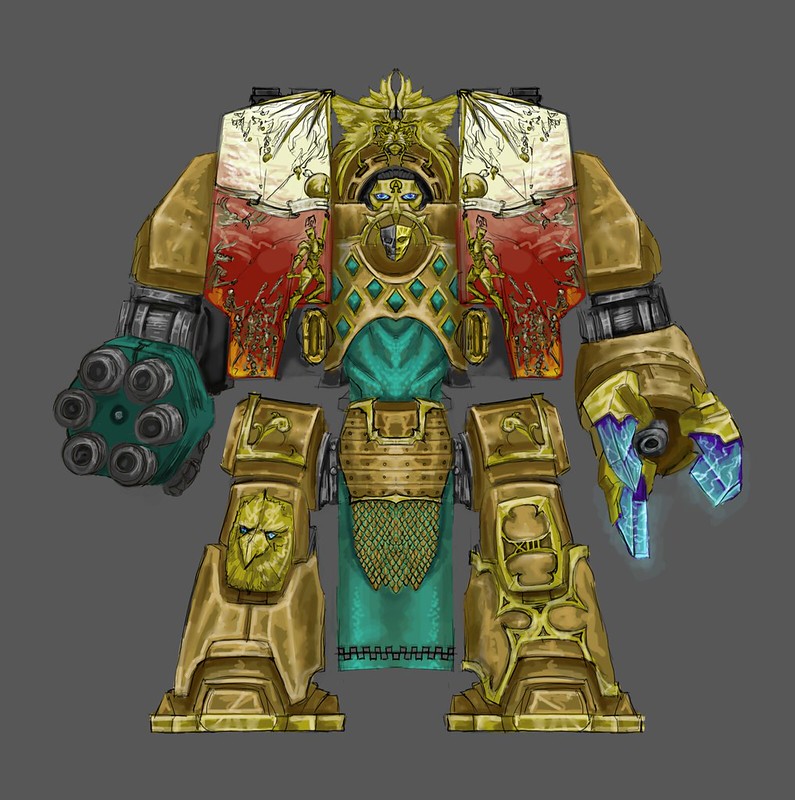 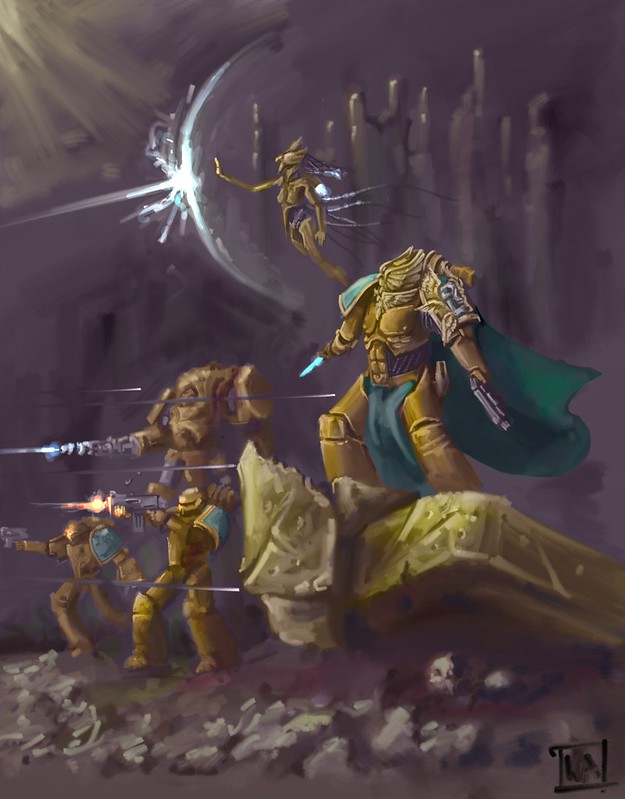 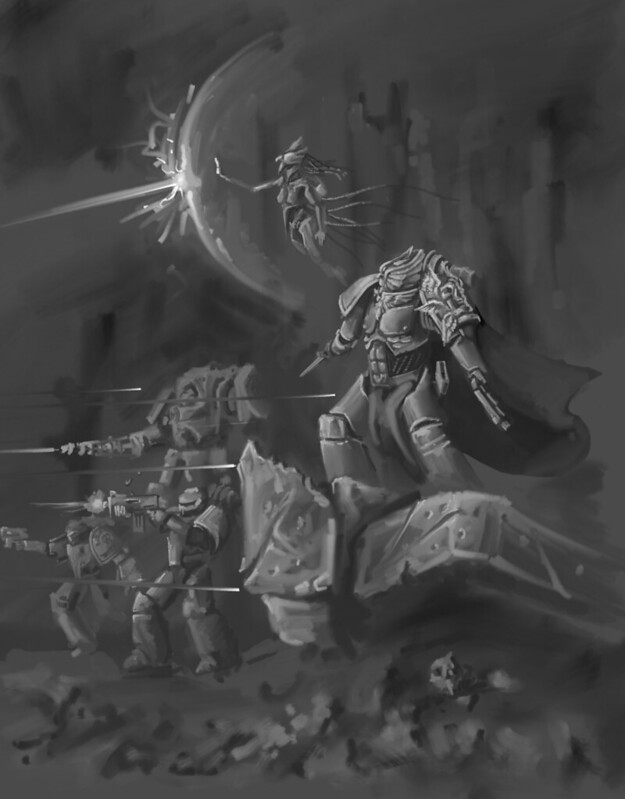 Also tagged with one or more of these keywords: Broken Throne, Alternative Heresy, Argent Scions