Iason and the hunt for the Golden Ram

Betrayal from our own kind, returning from deep recon of the southern reaches we were greeted by a picket line of the 17th legion who opened fire upon us as soon as we reverted to real space. After a blind jump saved our hides we have hidden in the orbit of a dead world long enough to effect repairs. Staphylus just brought me a report on our situation, 26 dead and Geller field generators are "delicate" in his words, the Argo can fly but for how long? What idiot thought putting a warp engine on a Stormbird was a good idea?

Well finally some good news, Apothecary Eribotes has managed to get everyone back on their feet and combat ready. I have 30 battle ready men aboard, but id rather avoid a fight if possible.

We are headed to the armoury station at Iolcus, prehaps we can find an answer to the madness of the last few week. I have avoided letting my mind dwell on the reasoning behind why Lorgar's sons would turn their weapons on us.

They have found us. Two cruisers caught us as we reverted to real space after risking a short jump, however Tiphys steered us to a nearby nebular he assures me it shall cloak our movements.

I am slightly ashamed to say i muttered a prayer to the old gods of my homeworld as the dark shadows passed over us.

Tiphys swears he has seen a vessel in the void, not belonging to the Word bearers. I've ordered him to keep it to himself.

Tiphys was correct We found a vessel, twisted and broken, it appears to have been here a long time. I've ordered a boarding action we need supplies.

Warp be damned. I found no answers only questions. The vessel was empty bar a single man, an Astarte his markings, armour type unfamiliar to me.

Steel plate with an azure serpent on a white field. The man is warp-mad, raving of a war of Saints and warmasters. He slips in and out of lucidity Apothecary Eribotes can offer no explination. I have ordered him sedated.

We have arrived at the armoury station Iolcus. Legate Pelias welcomed us but was not suprised to hear of the Word Bearer treachery. This betrayal was wide spread and Calth herself is under siege.  The survivor has regained his mind enough to tell us his name, Chiron of the Iron Snakes, a formation of Astarte i can find no record of.

Chiron in a fit of madness warned of a great golden ram that would shatter the sky. I would dismiss them as the ravings of a man whos mind was broken. Except for the entire astropath choir screamed of the same thing before they all died.  Survivors from all over the 500 worlds have begun to  arrive over the last few days bringing with them tales of brutality and nightmares.

Legate Pelias' Tech-adept Hylas has repaired the Argo as best he can.

Chiron passed in the night his last words were of the Golden Ram which he claimed lay deep in now hostile territory in the very home of the bastard himself. On Colchis. Pelias has decreed that I should invesitigate the claimes of this Iron Snake. I am to take my recon company and the Argo to Colchis. I can not expect those i commanded to waste their lives so i have ordered their transfer to the station garrison. I shall take only volenteers.

Word of my mission has spread like wildfire through the armoury station, and this morning after i completed my inspection of the Argo i found the hangar deck filled with the son's of Ultramar each begging, bragging, and boasting for their place at my side.

Actor Son of Hippasus was first to catch my eye. A solid leader of men and a vetran of many compliance campaigns a warrior i had fought along side in days past. 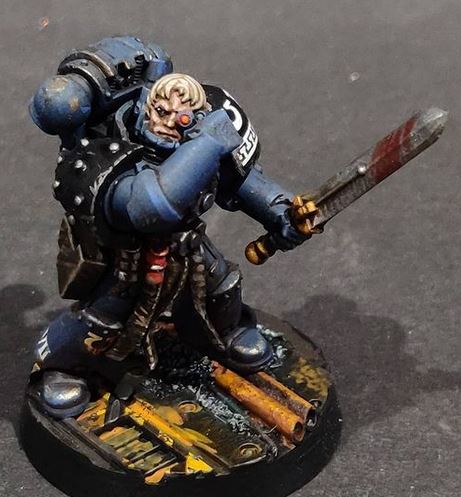 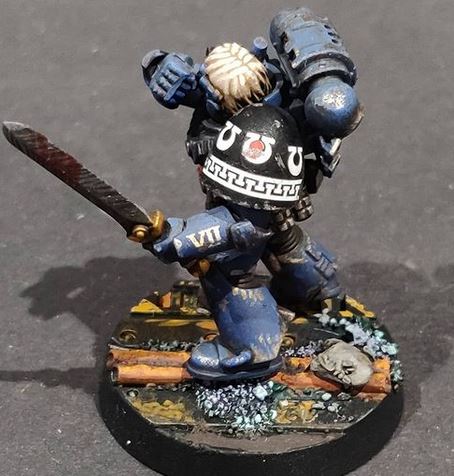 Next was Acastus, as a son to Pelias if rumour was to be considered. Eager and new to war he begged for his place to prove his metal in the name of the Primarch. 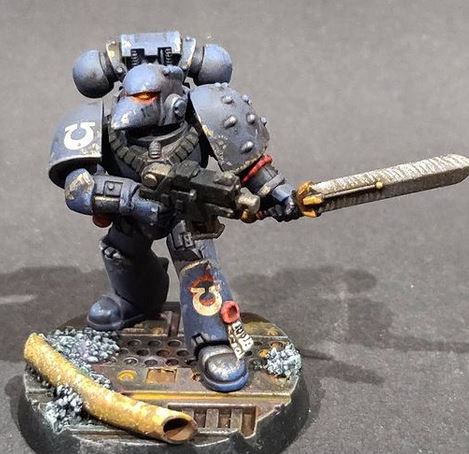 always a big fan of the integration of Classical myth etc. into 40k

Miniatures are well done, too - did you build the headset onto the BA head ?

Really liking the integration of ancient myth and horus heresy. Nice work on the marines too, those poses are solid, though I feel the blood looks a little flat on the blade.

always a big fan of the integration of Classical myth etc. into 40k

Miniatures are well done, too - did you build the headset onto the BA head ?


Nope totally stock head no idea what kit it comes from as I got a big bits box from a guy on FB a few years back and my last 2 heresy armies have been 100% helmeted.

I think it's from the Baal Predator kit.

Lovely models, well painted, quite similar poses though?  The bases look amazing, would love to see how you did them!

I think it's from the Baal Predator kit.

Lovely models, well painted, quite similar poses though?  The bases look amazing, would love to see how you did them!

Yeah problem with the limited mk6 marines i have avalible but i have some better poses in mind.

Hidden Content
It's only a small problem, but you might want to polish some of the grammar to improve your narrative. For example:

Tiphys was correct(insert'.') We found a vessel, twisted and broken,(change',' to'.' and 'it' to 'It') it appears to have been here a long time. I've ordered a boarding action(insert ',as') we need supplies.

The Argo's warp engines have been torn down and rebuilt in record time, a fact the tech adepts would rather the Primarch didn't hear about unless he slashes their given maintenance

I had to implement a strict training regime to choose only the best warriors for this quest, the latest I have chosen is Admetus. A man who I had not heard of until this day, but one I will watch closely. He was vouched for by several for his work is the rescue of the Alcestis from the Hades cluster. He has a strong arm, and more importantly a strong heart as I have seen him counselling and consoling those who are struggling in these dark times. 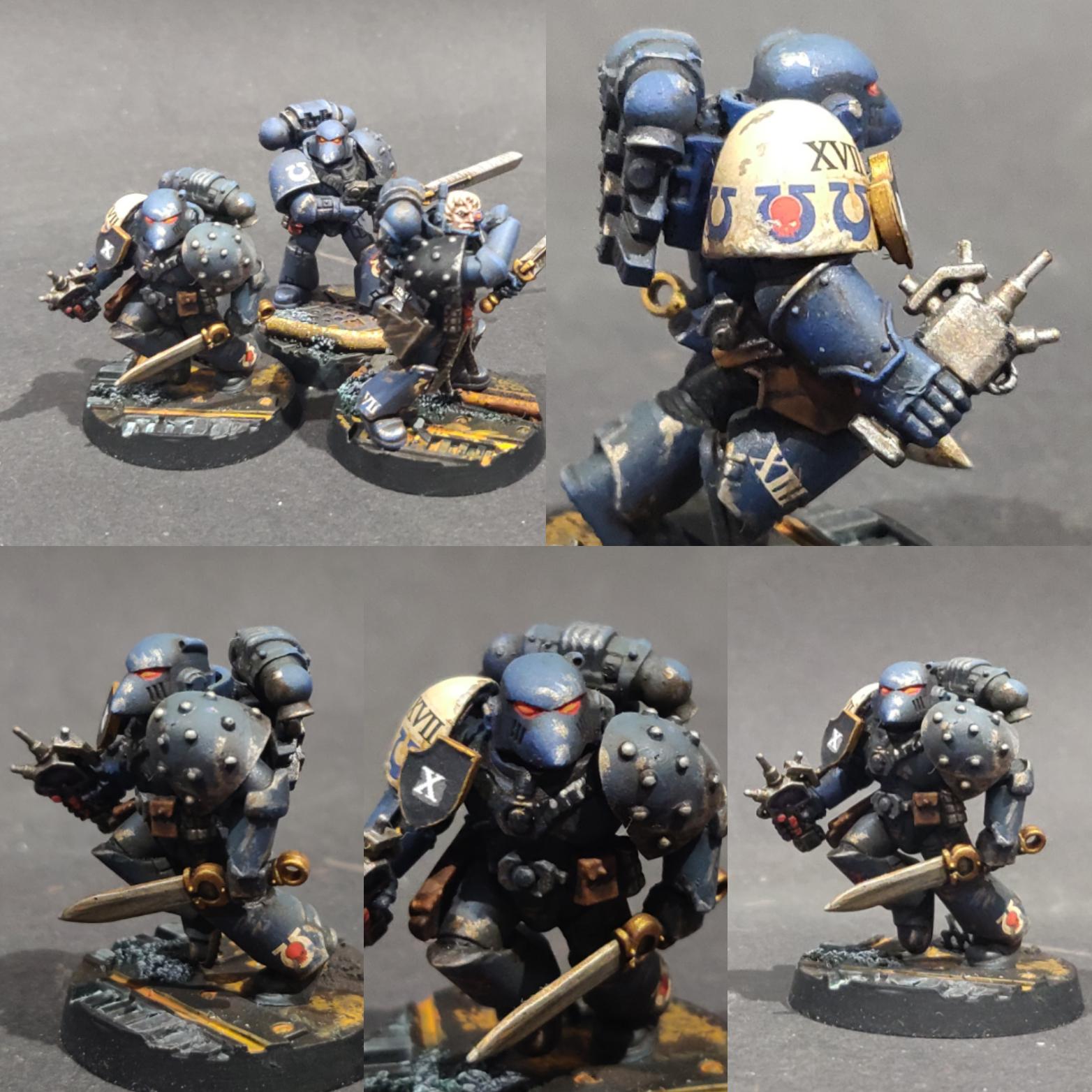 Those custom pauldrons are absolutely baller. They feel perfectly appropriate for company-level heraldry.

Dirty Ultras are the best Ultras, and these do not disappoint!

Great looking Ultramarines, I love the decoration on the shoulders.

BCC's Hobby Guide:
- Be Grim Dark not Grim Derp
- Hobby for 15 minutes a day
- Your miniatures are always the best painted in the room
- Game with your heart and don't care about losing
- Make sure your opponent is having fun

Legionaire Peneleos, We had met once before many years ago when we burnt out a nest of Eldar. He arrived two days ago on a damaged Frigate in such dire shape that the mooring tugs barely got it far enough away from the Armoury station before it went critical. When he heard of my plans to strike at the heart of Cholchis he swore his life to me and I was happy to take it. If my memory doesn't fail me Peneleos was always headstrong and aggressive; often charging when doctrine demanded retreat, luckily his skill with a Gravgun always paid off. He takes up a shield and stands with us now. 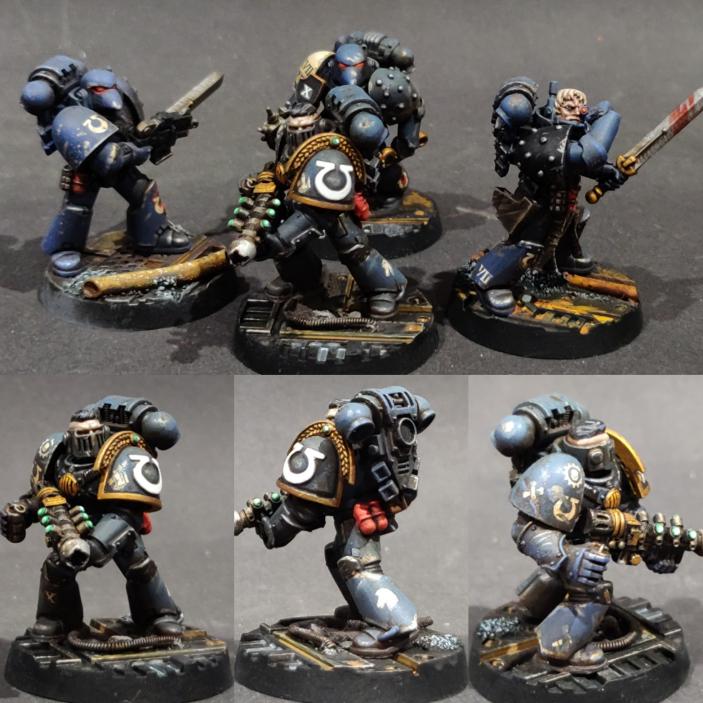 This is really cool! Can’t wait to see more

I love the paintjob, can you tell us more about your painting techniques?

I love the paintjob, can you tell us more about your painting techniques?

sure i start with a black primer with a zenithal white layer. Then i airbrush on a layer of macragge Blue then a layer of Calgar blue zenithal over that. Then i do a varnish layer, decals. varnish, stipple/sponge on calgar blue chipping and then silver chipping. Varnish. Then a burnt umber oilwash. then pretty much everything else on top of that.

We left the Armoury station two days past Tiphys has been mewing like a child since we slipped our moorings. I had hoped for a simple transversion into warp space but the Astropath warned that the warp is becalmed like a windless day on a mirror-like lake. We can fly no more than a  few minutes in the imaterium before the astropath's screams become to much to bear and we revert to realspace. To travel to Cholcis on sublight would take hundreds of thousands of years while my thirst for vengeance lends me, unending patients. i feel that the warnings of the mad man Chiron would be wasted if we took that long.

Phineus may have provided us with salvation. He informed me of a natural...or unnatural phenomenon that may help us. This so-called wyrmhole was discovered during the great crusade and transports any vessel who passes through its eye. According to Phineus he was aboard a vessel that travelled this way centuries ago, and if he is to be believed the vessel appeared no more than a sector from Cholchis.

Skimming in and out of the warp has taken its toll on the astropath and the rest of my crew. We have found the wyrmhole, a sickening bruise in space swirling with hot gases and radiation levels that worry Eribotes. There appears to be some ...blockage in the way. A space hulk has stopped neither in nor out of the event horizon of the phenomenon.

There is no way around it, probes and CAT missions have revealed that there appears to be a way through the hulk, it will require a detail to disembark and travel on foot to allow the Argo to pass through the vessel. The men are ready, their blades sharp, shields wide, and hearts strong.