War of the Eagle

War of the Eagle

Deployment:
I deployed my entire army as close to the line as posible, except for the heavy intercessors which sat atop my home objective and the terminators which where held in reserve. Chaplain on bike and out riders on left flank.

He deployed fairly conservatively, bikers and land raider far in the back. Tac squads in ruins in his deployment zone. Chapter master and 10man terminator squad in reserve. Inner circle terminators in the landraider.

Pre battle thoughts:
Our lists where kind of similar with lots of 3 wound models. It was my first time playing the army and was a casual game so I decided to play pretty wrecklessly and just try to get stuck in.

First turn:
My chaplain successfully uses his extra charge range aura, and my entire army (besides heavy intercessors) moves and advances forward getting units on all 3 center objectives. I get some random shots off using assault weapons and killed a couple tactical marines. My eradicators miss all their shots on the redemptor dreadnought. I successfully make charges against a tactical squad on the left with my outriders killing half of them.

The Dark Angels inner circle terminators disembark and move tward my outriders, the bikers move around to the left of his deployment zone and the dreadnought moves forward. He kills a few assault intercessors with an anemic shooting phase. He then charges the outriders with his Inner Circle Terminators, and charges the Eradicators with the Redemptor. Whipeing both squads out in the process. 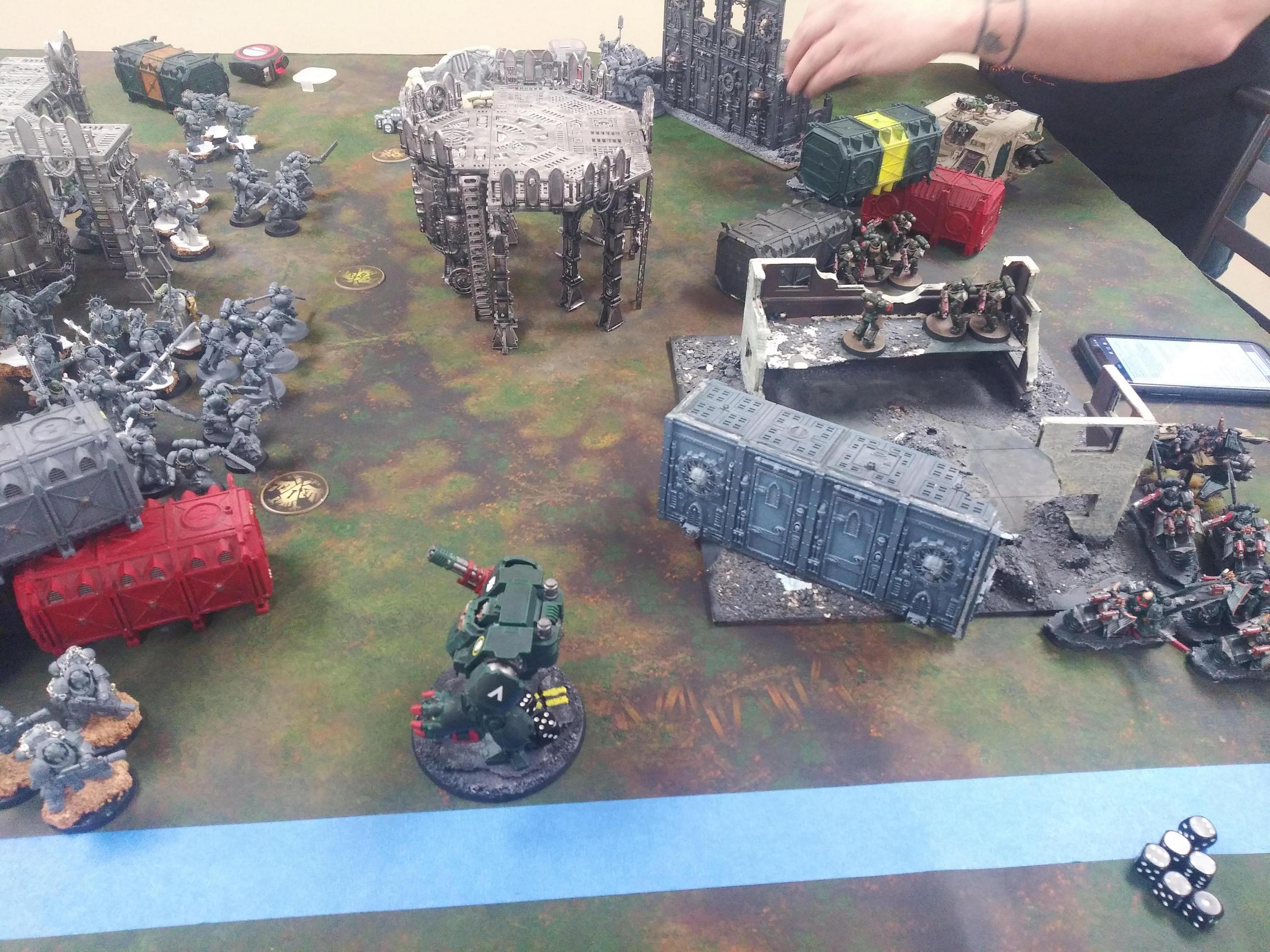 Chaplain fails to Inspire.
I move my entire army forward again (besides heavy intercessors, Exterminators, and squad of 4 intercessors holding objectives) chaplain cuts tward the center of the board.
Librarian fails his power and I kill a few more tactical marines in shooting phase.
Librarian, 1 squad of blade guard and 1 squad of assault intercessors charge the Inner circle terminators. Venerable dread charges Redemptor. Everything else fails their charges. Was pretty crazy. Librarian kills a InnerCircle Termi and they Interupt and slay all 5 bladegaurd. (Those things are scarry) assault intercessors fight twice and kill the rest of the Termis. Venerable dread brings Redemptor down to 4 wounds but dies in the counter attack.

Ravenwing rushes forward, deathwing drop down in the right centerish with chaptermaster. After a ton of short range rapid fire shooting he was able to kill 2 bladegaurd, 1 assault intercessor, and 2 Eradicators. My chapter master tanked all the Redemptors shots, and the heavy intercessors tanked all the deathwing shots.
He charges my chaptermaster with the redemptor. (kinda left him exposed since I never expected my eradicators to keep missing The dread) He also charges the assault intercessors with the Ravenwing. Chapter champion heroically intervenes into the Ravenwing. Redemptor almost kills my chaptermaster but dies to him as a result of his failures. I Interupt with my champion and slay 3 bikers. They strike back and kill ome intercessor then lose another biker.

Dark angels player waves the white flag and succeeds the game due to having almost nothing else to work with, and no way to stop my points lead from holding so many objectives.

After thoughts: I played bad my first turn due to my eagerness to rush into CQC but my opponent pulled back from this and let me control 70% of the board and could not get it back. My failed charges turn two hurt me bad. But his terrible shooting and assaults on his turn two hurt him far more.

Also tagged with one or more of these keywords: Dark Angels, 2000pts, Battle Report, White Scars