Just starting to build a knight force (including models that could hopefully be fielded as either imperial or chaos). I have a valiant (/tyrant) and I’m wondering if any chaos ‘questoris’ models I add would look better as actual chaos knight models or generic imperial ones?

I like the looks of the chaos knight but as I’d like to field the “imperial” models (I.e. valiant/tyrant) as part of a chaos force without any big conversions (will probably just change some base items to distinguish between chaos and imperial) I’m wondering if I should keep all the models “clean looking” in order to keep a consistent look. Or will people raise eyebrows at knights that aren’t conspicuously chaotic being used as despoilers/rampagers ?

As an example: WIP changing base decorations: 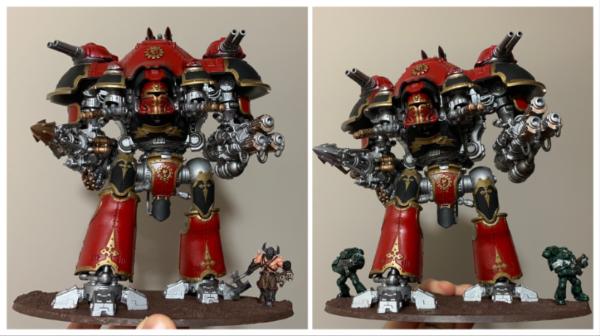 Could say they have recently turned to Chaos, just because your a Traitor doesnt mean you have to cover yourself in spikes and severed heads.

I think covering the model in spikes and severed heads is part of the allure of Chaos as a faction, haha!

But your solution certainly works too.

Thanks guys! Decided to go all in with the ‘normal’ knights!

Building up a supply of models to use on the bases.

Figure I can use daemons when they are infernal, CSM or cultist when iconoclast, marines when imperialis and need to lay my hands on a few skitarii for mechanicus:)

Built and painted two warglaives and a castellen over the last week. The lance is taking shape! 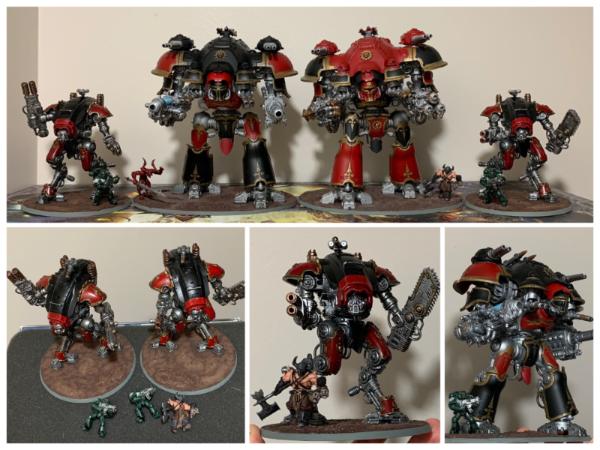 A great solution to an expensive problem!

Not all Chaos taint is external. Look at some Slaanesh followers, for instance.

Incidentally, I'm looking at Chaos knights, which is your favourite game-wise of the big guys, the Valiant or the Castellan?

A great solution to an expensive problem!

Not all Chaos taint is external. Look at some Slaanesh followers, for instance.

Incidentally, I'm looking at Chaos knights, which is your favourite game-wise of the big guys, the Valiant or the Castellan?


I’m still building and haven’t gotten them on the table yet. So this is just theory hammer:

To me, to make a castellen work well it looks like you probably need to be a loyalist mechanicus with cold eradication wt and cawls wrath relic. (Second best maybe infernal, with endless torment custom household and daemonic surges... but it’s a lot worse than the mechanicus)

The knight valiant looks best as either:
- loyalist imperialis with relic flamer
- infernal so you can daemonic surge flamer up to S8 and D3.

Also, they look to have a bit of a different positioning role - backfield versus midfield . So which is best depends on what your other knights will be doing!