I've decided to post up some pictures of the two Necromunda gangs I have been working on; Cawdor and Orlocks.

I've been playing Necromunda a long time - since it was first released back in 1995. Back then I had all of the gangs at one time or another, but Escher were my gang of choice, and I built up more of a platoon of them than a gang! When 2nd edition Necromunda released I got both the Goliath and Orlocks gangs and enjoyed playing them both.

When the latest edition of Necromunda released I waited patiently for the house gangs to come out to see which one would grab me, and as soon as Cawdor were released I knew they'd be mine. I love the rag-tag look of them and the way GW re-imagined them compared to previous editions; I'd never been a fan of them before, and only ever bought the basic boxed gang back in 1st ed.

I got Orlocks mainly as a secondary gang and because none of my friends really liked them. I've grown very fond of them since I started building them, even though they're probably not as visually striking as some of the other gangs.

Anyway, on to some pictures. This was the test piece I did to try out the paint scheme, a simple ganger without much conversion work or FW pieces (just in case it had been a horrible mistake): 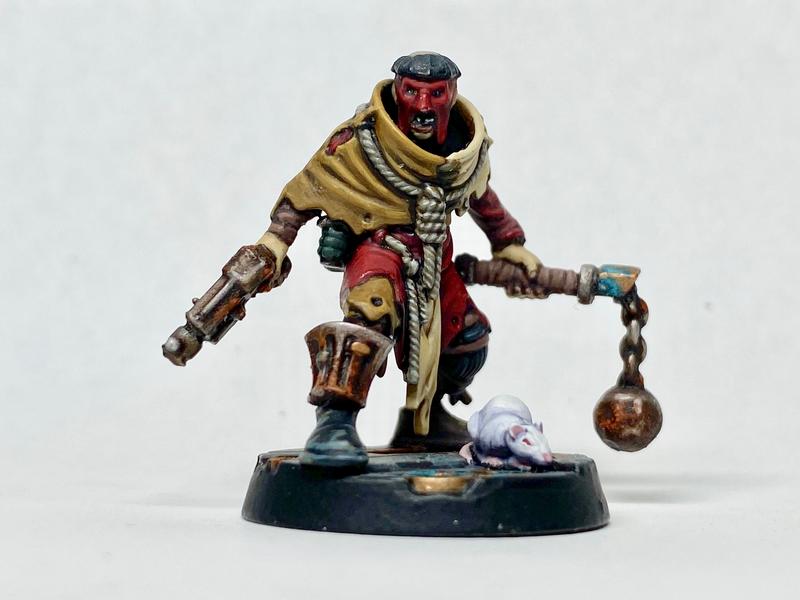 The main colours for the gang are red and bone cloth. I didn't want this looking too uniform, so this chap has a chunk of the cloth in a different colour. That will be a theme across the gang, where patches of the cloth will be different colours, vaguely close to the main red and bone scheme; e.g. orange, purple and dark brown for missing bits of red cloth and light brown, grey or white for missing bits of bone cloth. I imagine this representing the gang members cobbling together whatever they can find to repair their clothing when it is torn, burned or too full of bullet holes.

Another thing to tie the gang together is rats - every member of the gang will have them on their bases. I painted this one quite a while ago now (at least a year ago), but I've recently started working on the rest of the starting gang (only the first few colours so far, and those are missing the final highlights).

The leader and two champions: 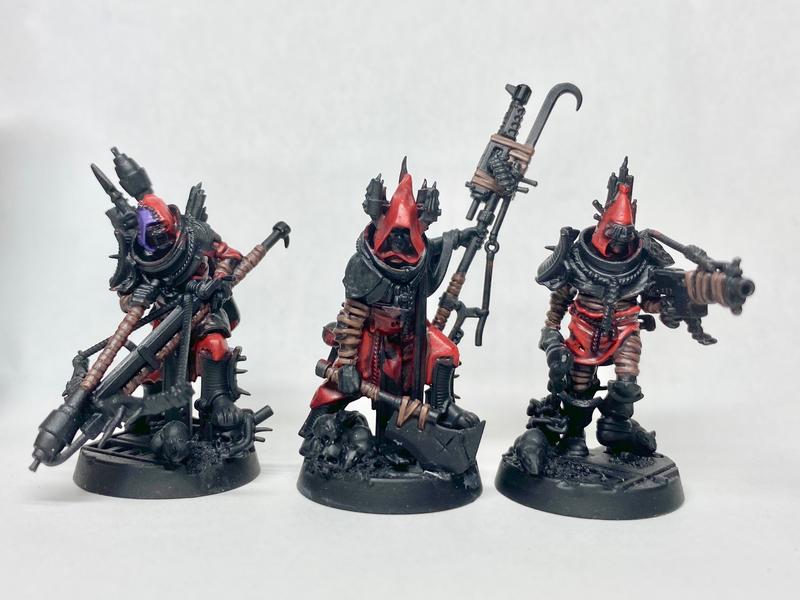 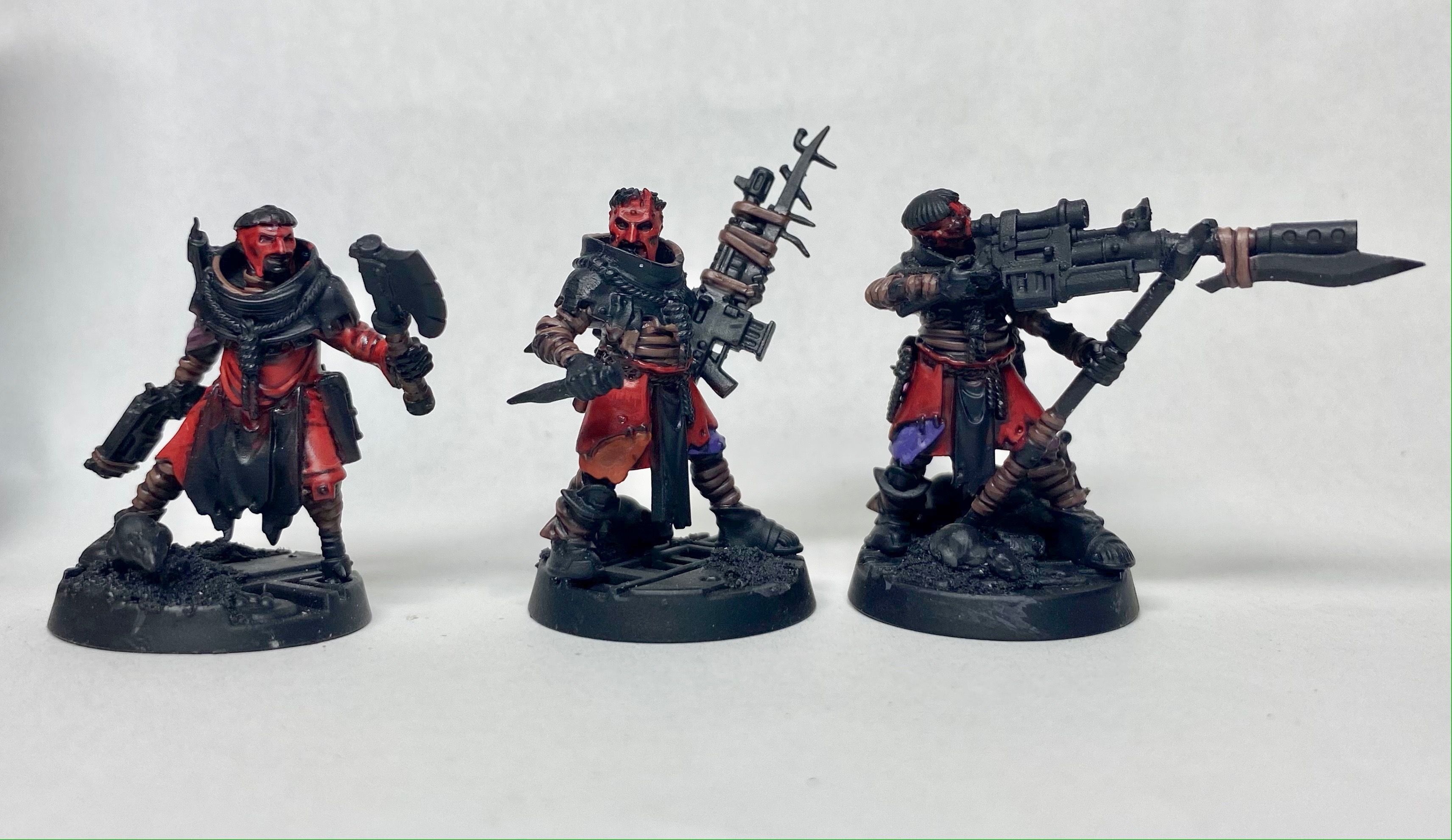 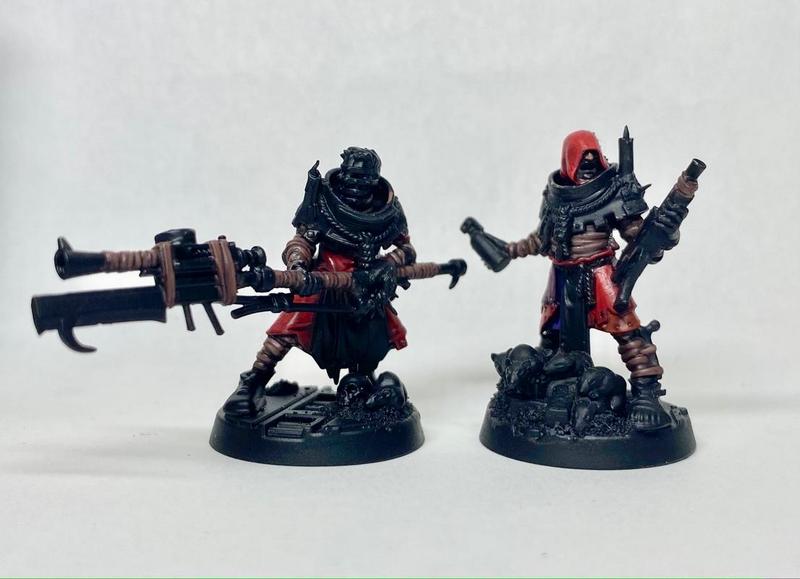 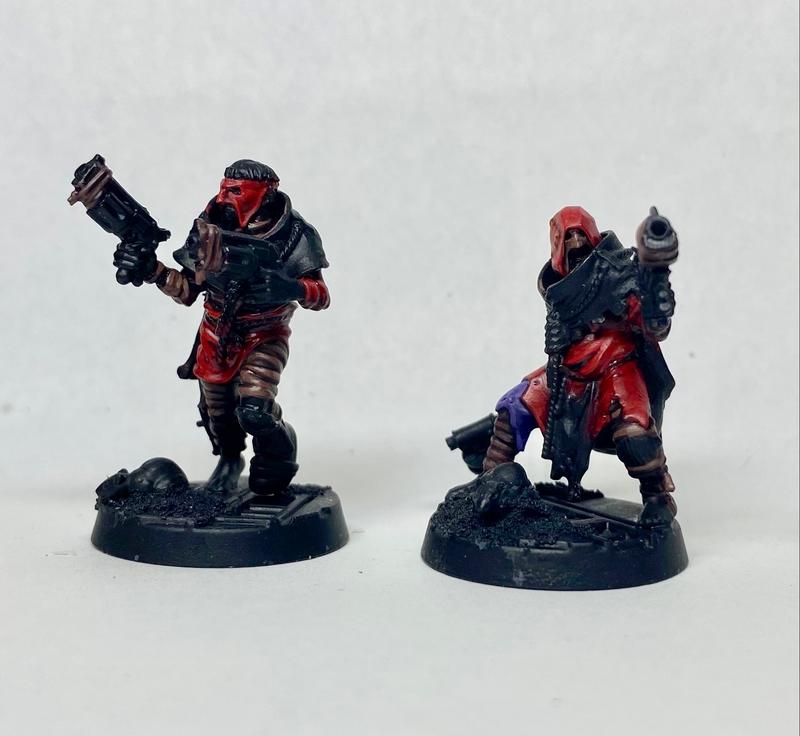 Not huge progress on them yet, but given the speed I paint it's a lot for me! There's a lot of conversion work gone into them, some of it quite subtle and some of it quite involved. Building the ganger (specialist) with the long rifle and the ganger with the blunderbuss in a firing position was quite a lot of work. I have pictures of most of them before they were undercoated that I may post later in the thread if anyone is interested.

I have several more Cawdor built too, including a second weapon option for my leader (boltgun and scratch built chainaxe), that are waiting patiently to be painted. Plus I eagerly wait to see what House of Faith brings for them, as well as the recently leaked Redemptionist rumours that may offer some more conversion fodder. Unless the Redemptionists will be part of the Cawdor gang; perhaps they will be the Cawdor prospects and alternate champions, perhaps with an option to field them as a  separate gang, similar to  Slave Ogryns.

Anyway, I'll leave it there for now and maybe post up something similar for my Orlocks in the next couple of days. I've also converted an Ambot for each gang which I'll post pictures of soon.

C&C welcome naturally - I'm hoping this thread will give me some inspiration to get paint on them as I am notoriously bad at finishing off projects!!

Solid start on these, Widowmaker! And welcome to the B&C!

I like the subtle conversion work that's gone into these: I'd be curious to see those pre-paint pictures, please.

I admire your skills and efforts. Add bloodstains to the gangers' weapons, and the models will be perfect.

Solid start on these, Widowmaker! And welcome to the B&C!

I like the subtle conversion work that's gone into these: I'd be curious to see those pre-paint pictures, please.

Thanks. Here's a few of the models with most conversion work. Firstly the champion with crossbow: 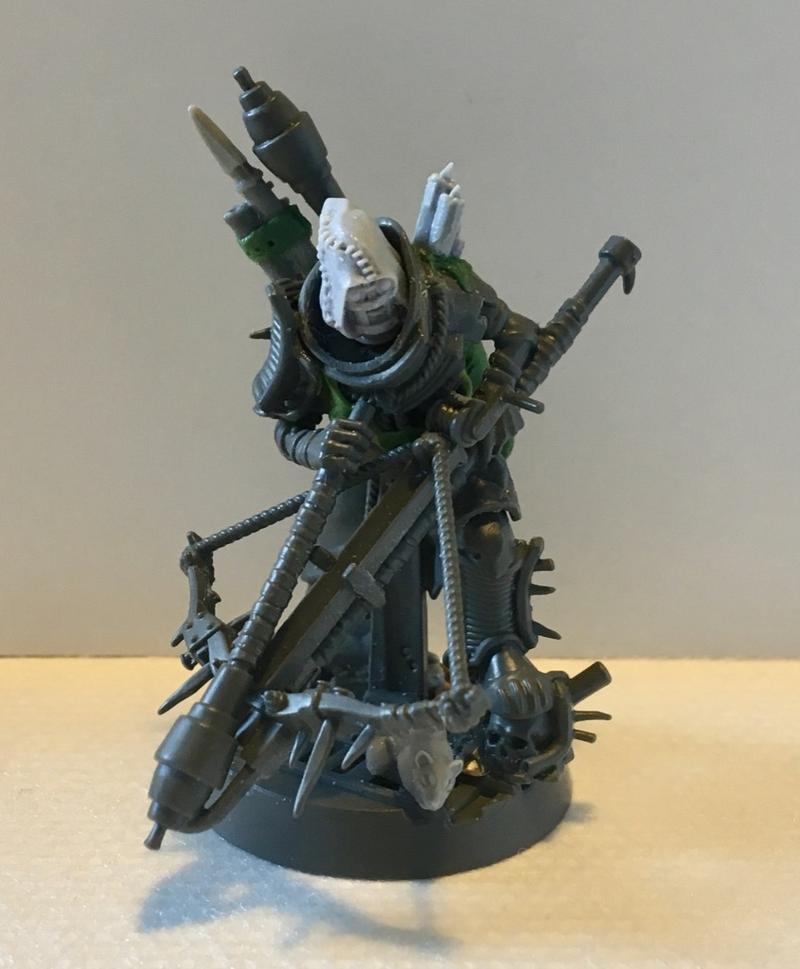 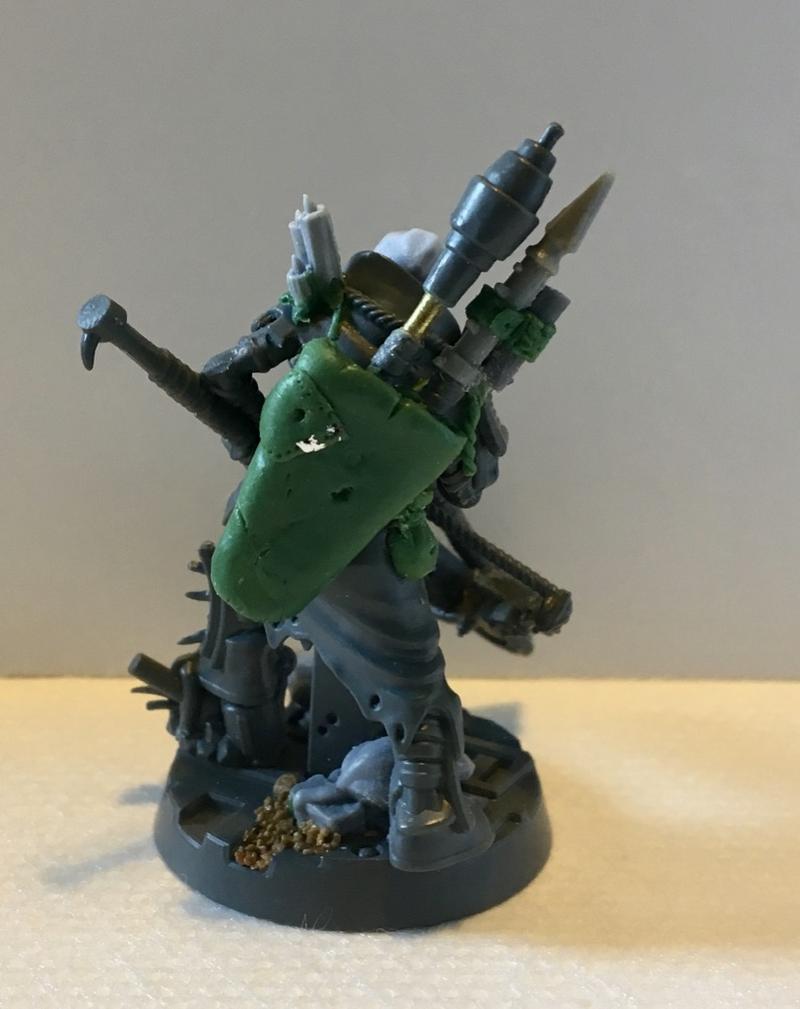 I gave him a quiver on his back to carry extra ammo (I feel like any model carrying a single piece of ammo is just crying out for immediate ammo roll failure first turn). I decided to give him something to represent the second ammo type (I assume the standard type is frag). It's basically a spiked fence post with a bit of dynamite tied to it using an old belt - proper Cawdor tech.

The second champion with reclaimed autogun and flail (he is designed to be cheap and get a new equipment set early doors): 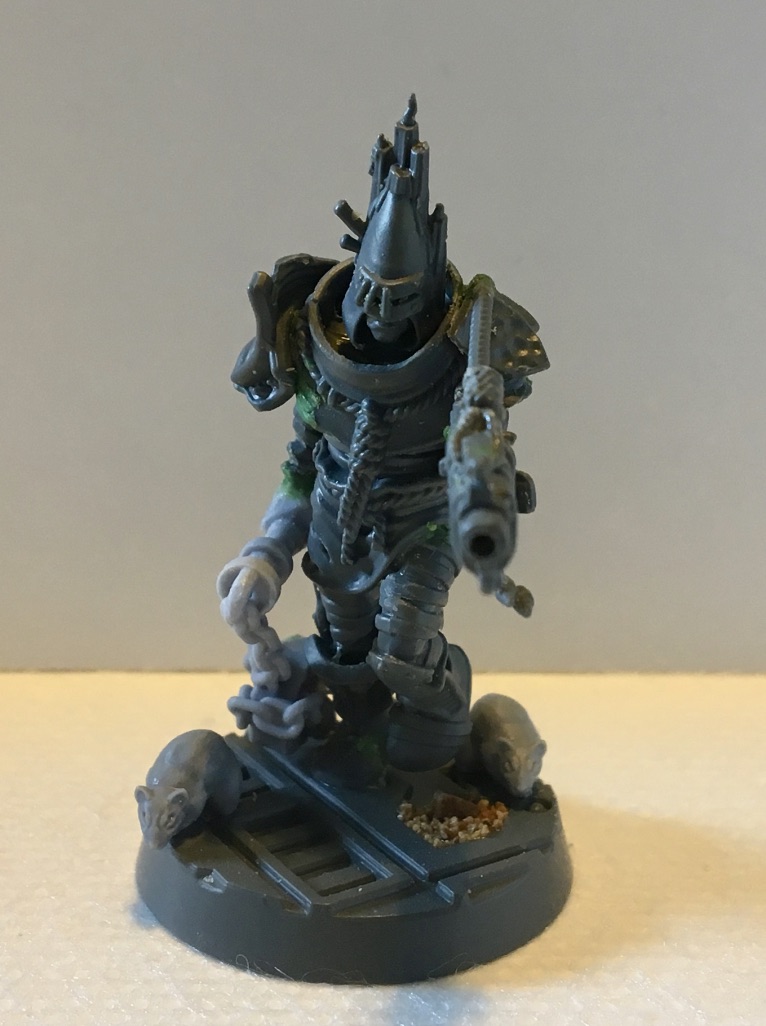 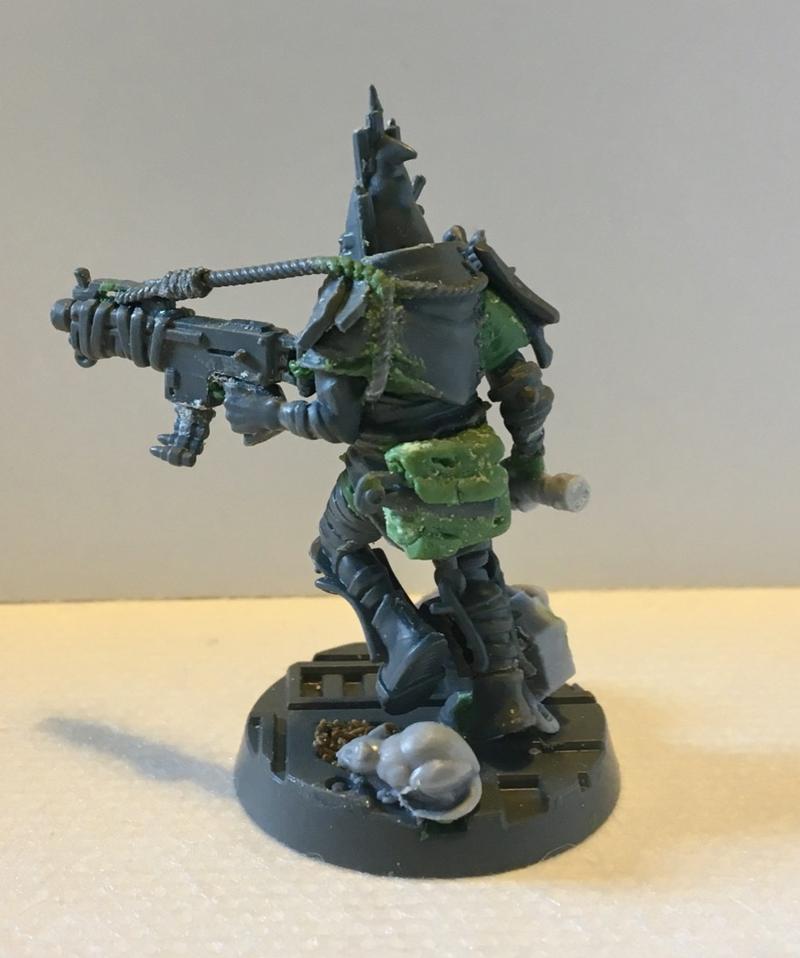 Quite a bit of work went into making a sling for the rifle from a noose so him trying to fire that autogun one-handed is about 5% less ridiculous. He also has a bum-bag with a molotov in it that he likes to keep handy for close encounters.

This ganger specialist took a load of work: 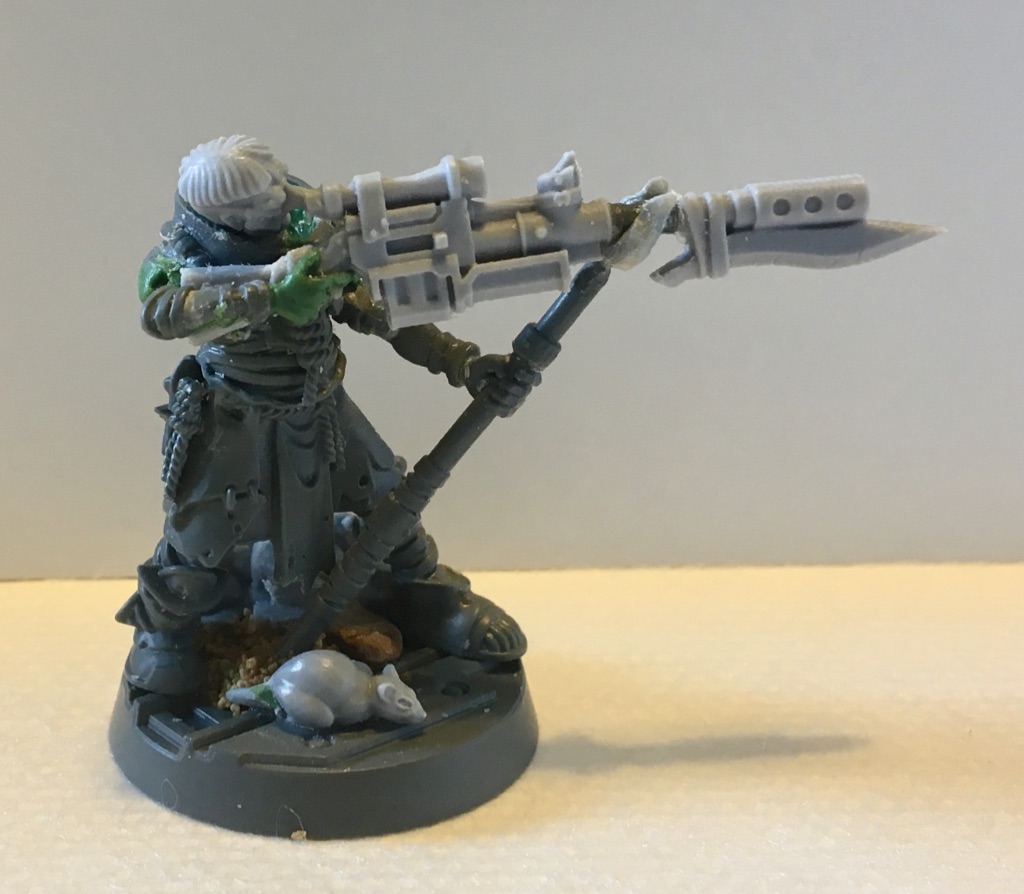 That FW piece is normally held on the barrel, so I removed that completely and replaced it with brass rod. I had to completely reconstruct the right shoulder and hand, plus making that rod he uses to hold it steady fit in was a nightmare. In vaguely heretical style, the part of the rod the gun rests on is made from part of a Slaanesh symbol!

This one isn't part of the part-painted group above; I just finished converting him: 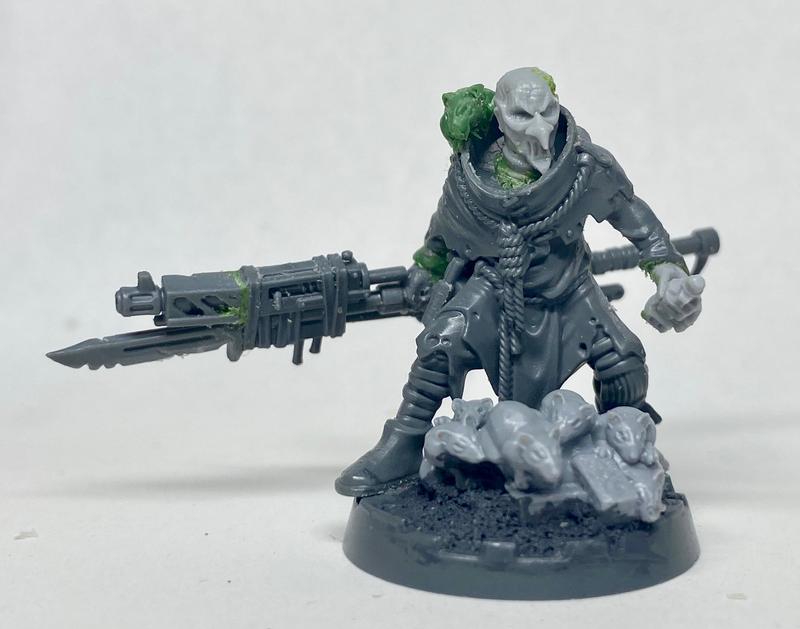 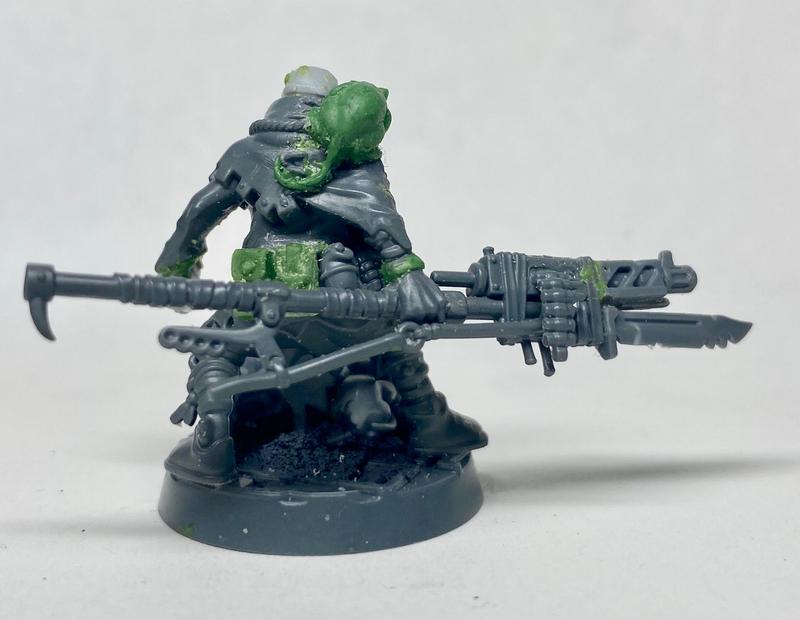 He'll be my ganger with bomb rats; he has a detonator in his left hand. I converted the polearm using Orlock weapon parts that he's obviously robbed found. I liked the idea of him being a bit of a rat-tamer type (like the Russian guy in the film Wanted) that uses the rats to blow up the underhive heathens. That's why he has the rat perched on his shoulder.

And this is something to save up for later in a campaign: 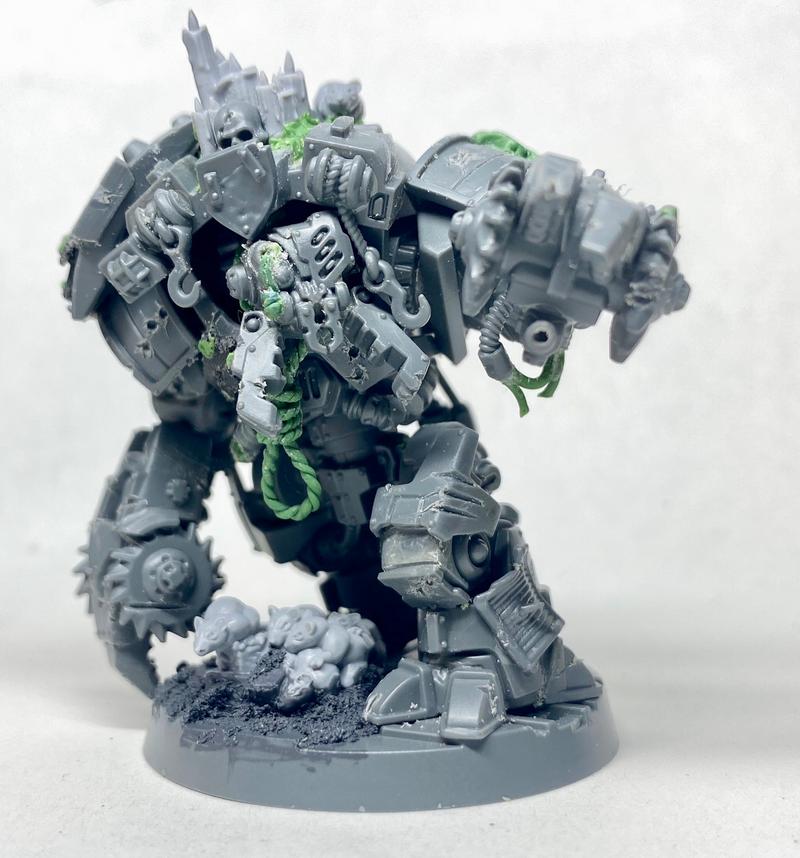 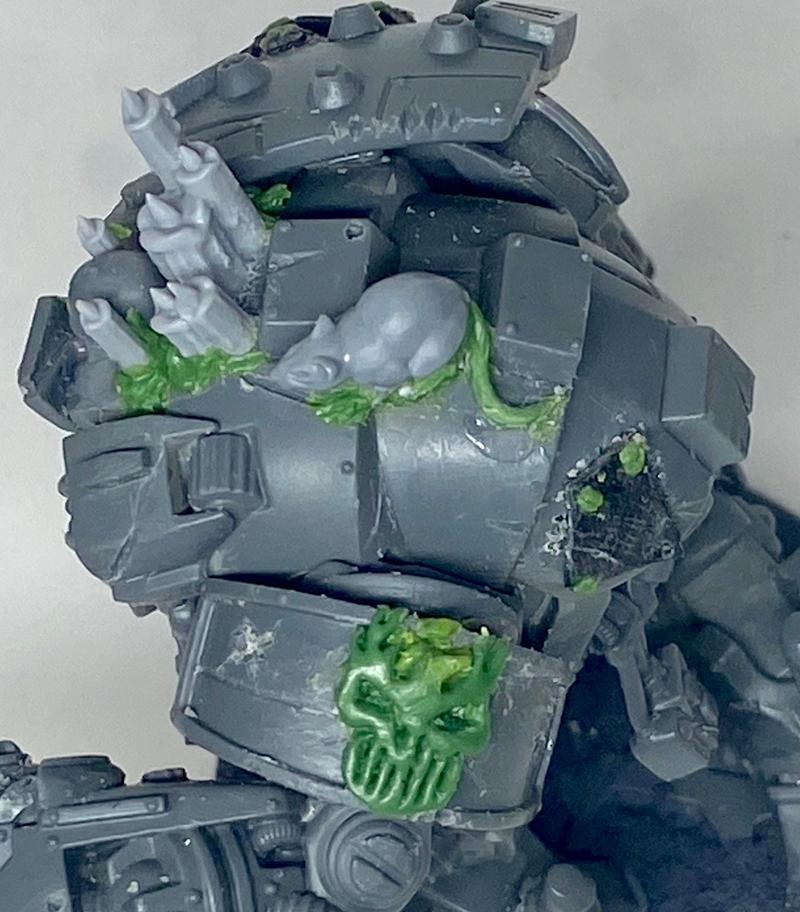 That Cawdor symbol on the shoulder does look better in person. I couldn't get a decent photo of it where it doesn't look terrible.

I admire your skills and efforts. Add bloodstains to the gangers' weapons, and the models will be perfect.

Thanks. Blood stains might be used on a few of them in moderation. I don't want to tread on the toes of Corpse Grinder Cults by adding too much gore.

That Cawdor symbol on the shoulder does look better in person. I couldn't get a decent photo of it where it doesn't look terrible.

Shrink the image or take the photo from further away, that way the image won't be enlarged and show imperfections that the naked eye wouldn't pick up.

I still have the photos of your entire gang pre-paint. I don't know if I sent them to you, but I can email them or post them on here if you haven't got them. That way you have them if anyone wants more pictures of conversions.

Some superb conversions there - great work! Looking forward to seeing those painted up.

Some superb conversions there - great work! Looking forward to seeing those painted up.

I still have the photos of your entire gang pre-paint. I don't know if I sent them to you, but I can email them or post them on here if you haven't got them. That way you have them if anyone wants more pictures of conversions.

Email them over if you don't mind. They'll be better pictures than I've been able to get on my phone.

Given the title of the thread there's a worrying lack of Orlocks so far so this post is aimed to remedy that in part. Less progress on the Orlocks and not many pictures before I undercoated them, but here it goes. 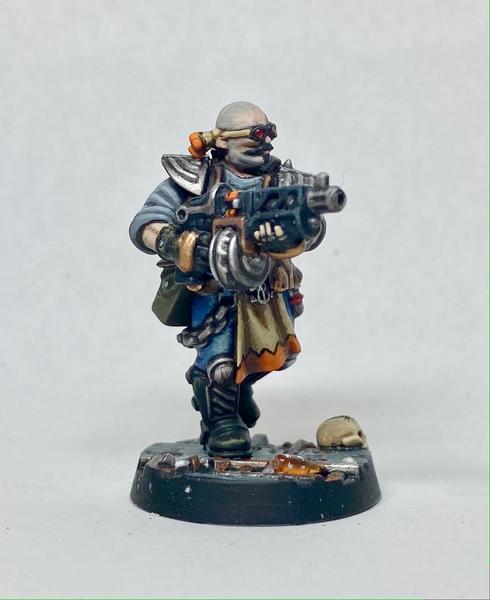 Here's the test mini I did, just a basic gunner with autogun. Orange is used as a gang/spot colour - the idea in my head is it maybe represents them hailing from Rust Town. 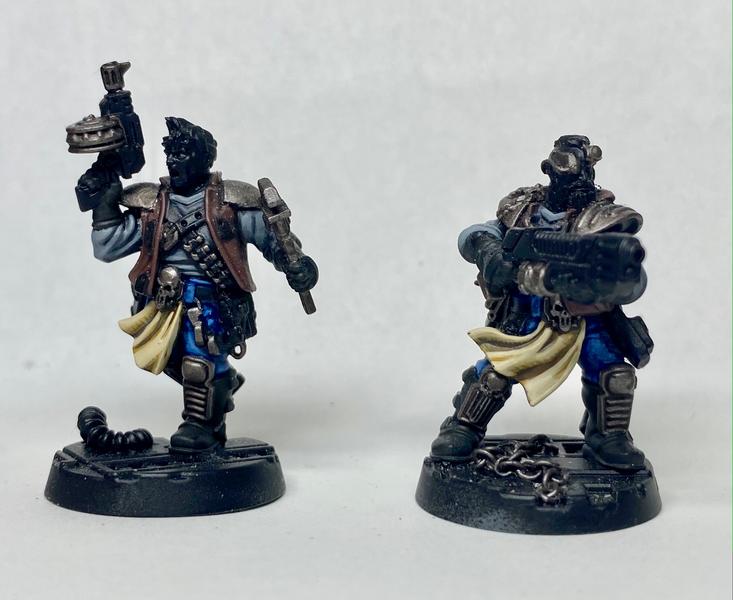 A greenhorn and road sergeant partway through being painted up. The greenhorns have plain shoulder pads (stolen from the Kroot kit) and the plates across the back have been removed completely. The road sergeant has one resculpted shoulder pad (the road boss has both sculpted): 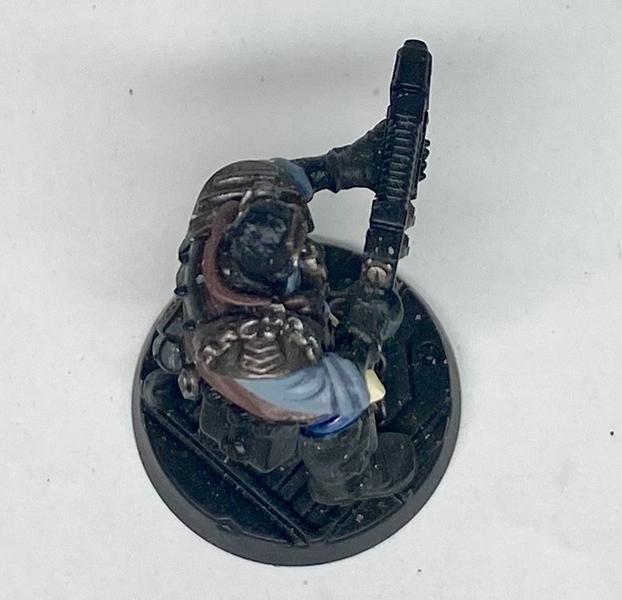 Not completely clear, but it is a gauntlet gripping a chain, reminiscent of the Orlock gang icon.

Some gunners before undercoating. I tried converting up a basic shotgun from the combat shotgun model, but in the end I swapped it out for one from the GSC Neophyte sprue.

Finally a few pictures of the ambot converted up for the Orlocks: 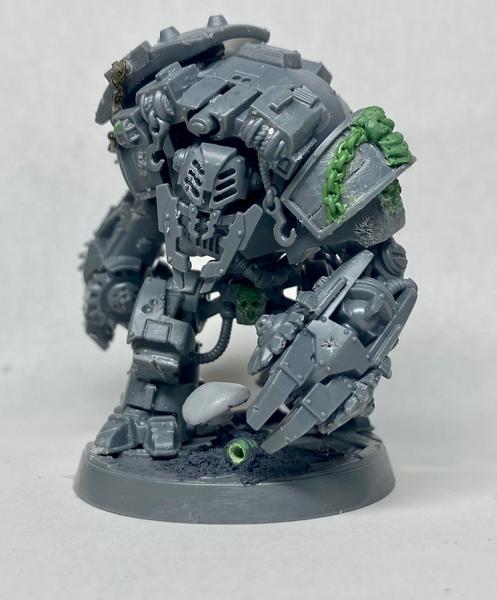 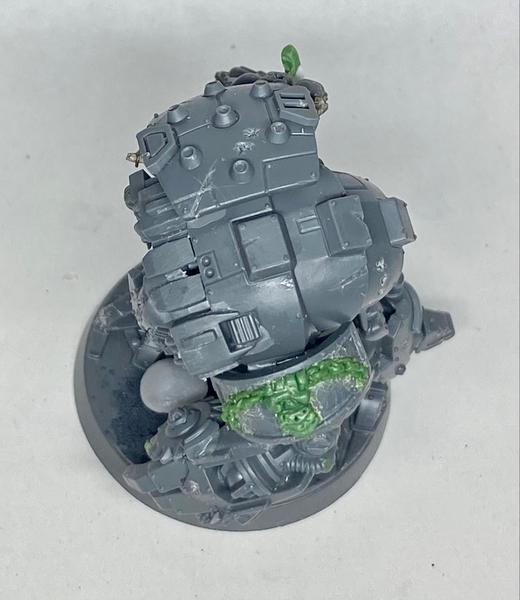 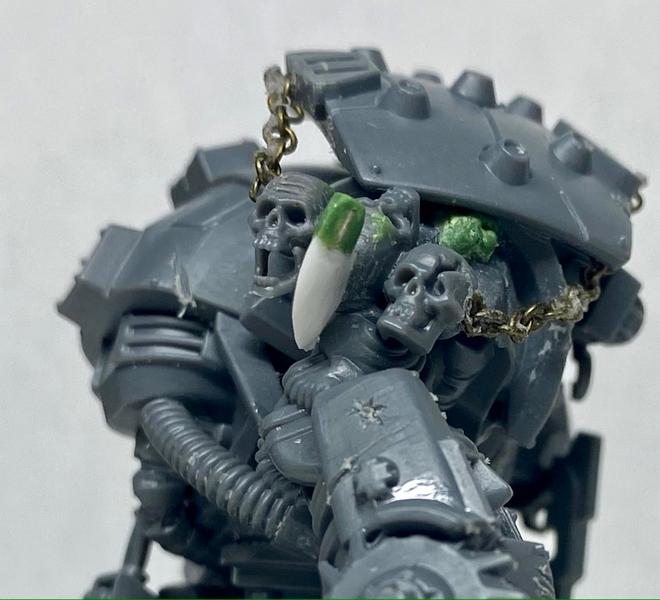 The skull trophies represent from left to right; a later generation Genestealer Cultist with just slightly ridged forehead, a Goliath that had a metal mohawk blade grafted to his skull and a regular human.

I'll hopefully be able to get more paint to plastic soon. I have made a start on the Cawdor Ambot, with lots of rusty metal and yellow armour plates (so it looks like a piece of industrial equipment they have robbed).

The Orlocks are coming along nicely, too.

Great progress so far Widowmaker82, good to see another old timer 'munda player - it's nice when somebody knows the difference between a Ripper Jack and a Millasaur.

Also tagged with one or more of these keywords: Necromunda, Orlocks, Cawdor