So I'm curious how everyone equips their Chaos Lords for 9th edition.  I might actually have the opportunity to start playing again soon, so I'm whipping up lists and such and prepping my models.  Going off just what I have now, I could field the Kranon/DV Lord as plasma pistol/Shadeblade though I'll probably stick with my Terminator Lord with Viper's Bite and Headhunter at first (to drop in with Termies or Oblits).

If you've got something fancy or unexpected to show off, I'd like to see it!

I run a Chaos Lord with a power sword (I like the look of my mini) and Faceless Commander (whatever the redeploy trait is) to babysit my Chosen and follow them with Renascent Infiltration. I have run a Chaos Lord with Viper's Bite and Headhunter, but it doesn't do much and I do it more because it's thematic. Very few characters are weak enough to be killed for it to be worth the investment, but obviously your mileage may vary! 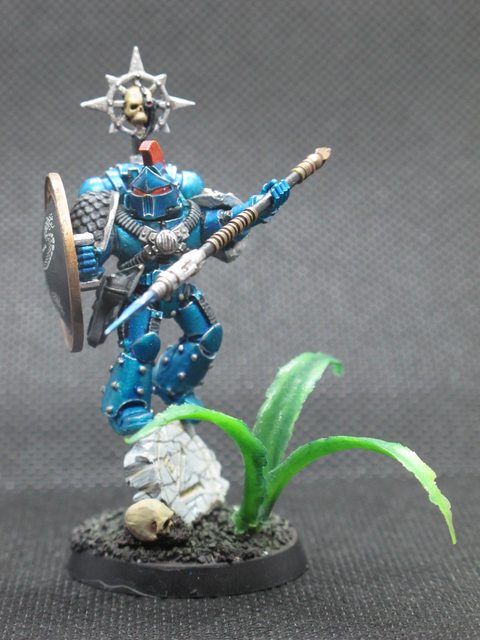 What bits did you use got this monster??

Excessus, that is a beauty! I think bright green flame might pop nicely if you were to repaint? I think a brighter green flame would compliment the darker green runes on the model's left-hand side.

Arms to me kind look like they are from the fantasy Skullcrushers kit? But I'm not certain. The size/pose looks about right, but the iconography looks different from the Skullcrushers I remember.

The Skullcrushers are the jugger-riding ones, right? Well spotted, it's one of their spears, well the handle at least. The left arm is actually Abby's original arm only reposed, the right arm is from the jugger kit. Flame and cable is from the Blackstone Fortress Cultist leader and the mace head is 3d-printed by a friend. I spent months trying to find a mace-head that fit with what I wanted but could not...so I opted for something selfmade instead. And of course...there is a lot of greenstuff involved...

...and what can't be seen in this angle is the volkite gun mag-clamped to his right thigh.

I'm actually going to keep the orange colour, I like the contrast between the cold colour scheme on the armour and the warm colour on the mace. I don't really know why I painted it in reverse though...

Currently running a Jump Pack Lord, with Master of Diversion WLT, Blade of the Hydra and a combi-plasma, he does pretty well as a support lord being able to hang back with my havocs and las helbrute, until the time he needs to jump up front when the plasma chosen get out of their rhino.

He's pretty good in melee also with 6-9 attacks at S5 AP-2 D2, wouldn't go after anything super tough but he holds his own against most things, just have to be careful to resist the temptation to self destruct with the overcharge unless its critical.

Not the usual colour scheme but I started this army in like the 2000's when I was a lot younger and went off colours that I liked. They are just "undercover".

To revisit this topic, I just want to say that I tried a sniper lord and felt let down.  The damage output was minimal, even with MWs, and I never felt that I had the spare CPs to toss out Daemon Shells more than maybe once per game.  Overall, quite disappointing -- I'll probably go back to buffbots with relic CCWs (like the DV Lord with Shadeblade and Faceless Commander, for example).

I've also considered winged DP with the Tzeentch daemon weapon.  He can get buffed to a 4++ with Weaver, and with the +S&A spell (I'm brainfarting the name) he's not a bad HQ assassin.  Thinking as I type, he'll probably be able to kill off a few BGV in a single phase, too, which would be nice.

I have only played a few games with my still-being-built Alpha legion army, but I have been running a Chaos Lord in Terminator Armor with the Mindveil relic. I have not stuck with a warlord trait yet as I am trying out several.

I have three that I regularly run in various lists, 2 Terminators and a regular depending on need. One terminator has a combi-melta and a chainfist and t6he other has dual lightening claws. The regular lord has a PS and combi-melta.

Here is a pic of the boys, the paint jobs aren't flash, but I do my best.

"Listen well Initiates, for I bring light to the darkness. It is the weak-minded that crave comforts, the Dark Angels need them not. Wealth? The sons of the Lion covet no baubles, for they are meaningless to us. Sensual gratification? We know well it's transitory nature. Pride? We are no welps of Russ. By our actions alone shall we be known!"