137 replies to this topic 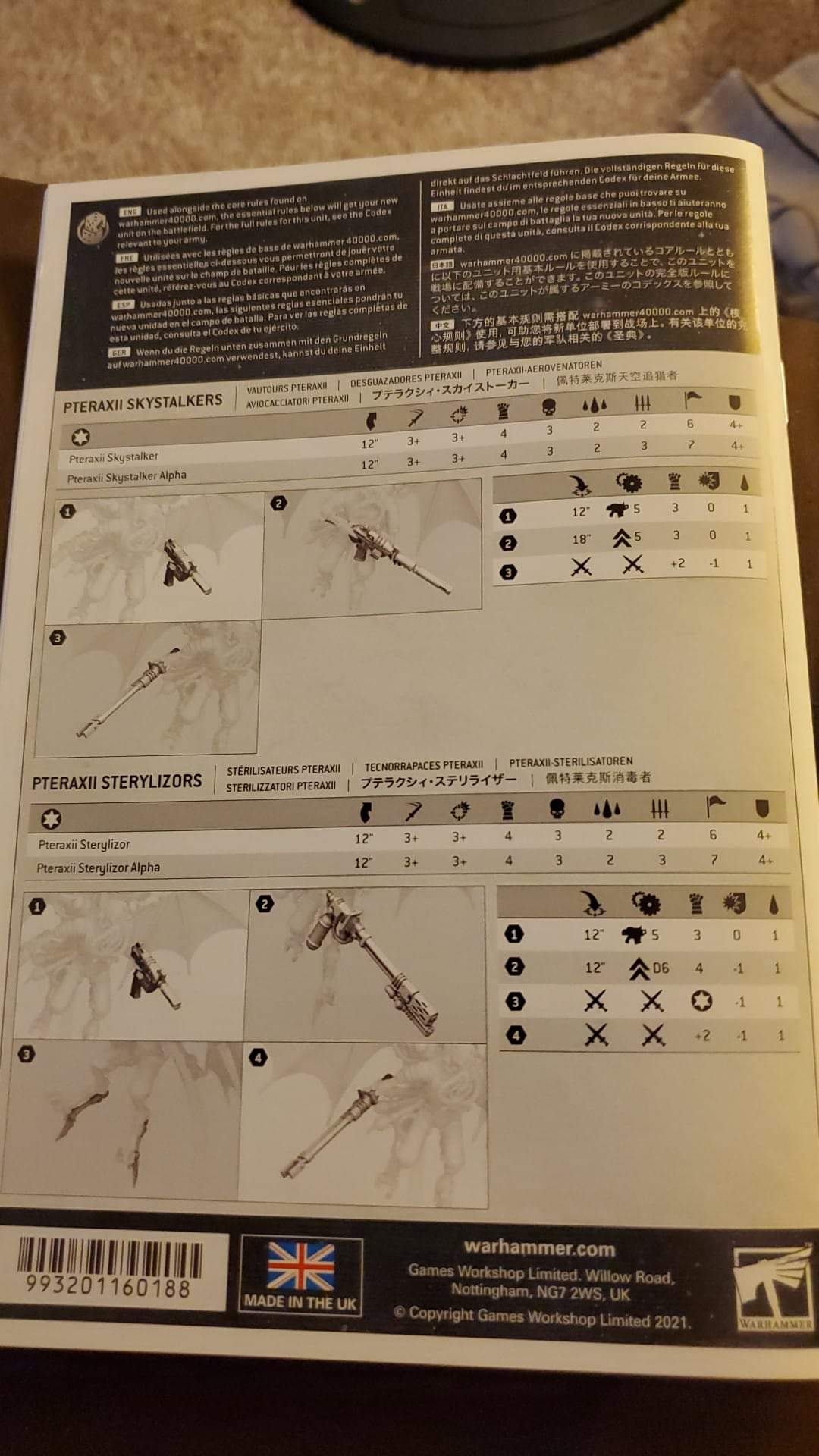 Cawl looks very slightly better, but really we never take him for his axe, so the extra strength is kind of moot (if you're swinging the axe, it's probably too late.

The Atomizer seems to have lost the half range potential D6 damage... for a flat 3. Meh

The interesting thing will be his aura for sure.

The Pteraxii Sterylizors look fairly unchanged (assuming their flamers still ignore cover?). Maybe this means the newer kits will be pretty much the same... including the Serberys?

The small taser is now -1 AP

The small taser is now -1 AP

A positive omen.  I really would like Sicarians to be good--they're such cool models.  This is off topic, but I've always thought some kind of Sicarian melee beatstick/blender character would be a lot of fun in the army and open up some play options.

If the Skitarii Alpha is a commander, the Skitarii Omega should be a ludicrously augmented Sicarian on the level of an Imperial Assassin.

). They have the lore of the resonance ability but it really doesn't work with hoping a unit lasting to the second round of close combat in 9th. 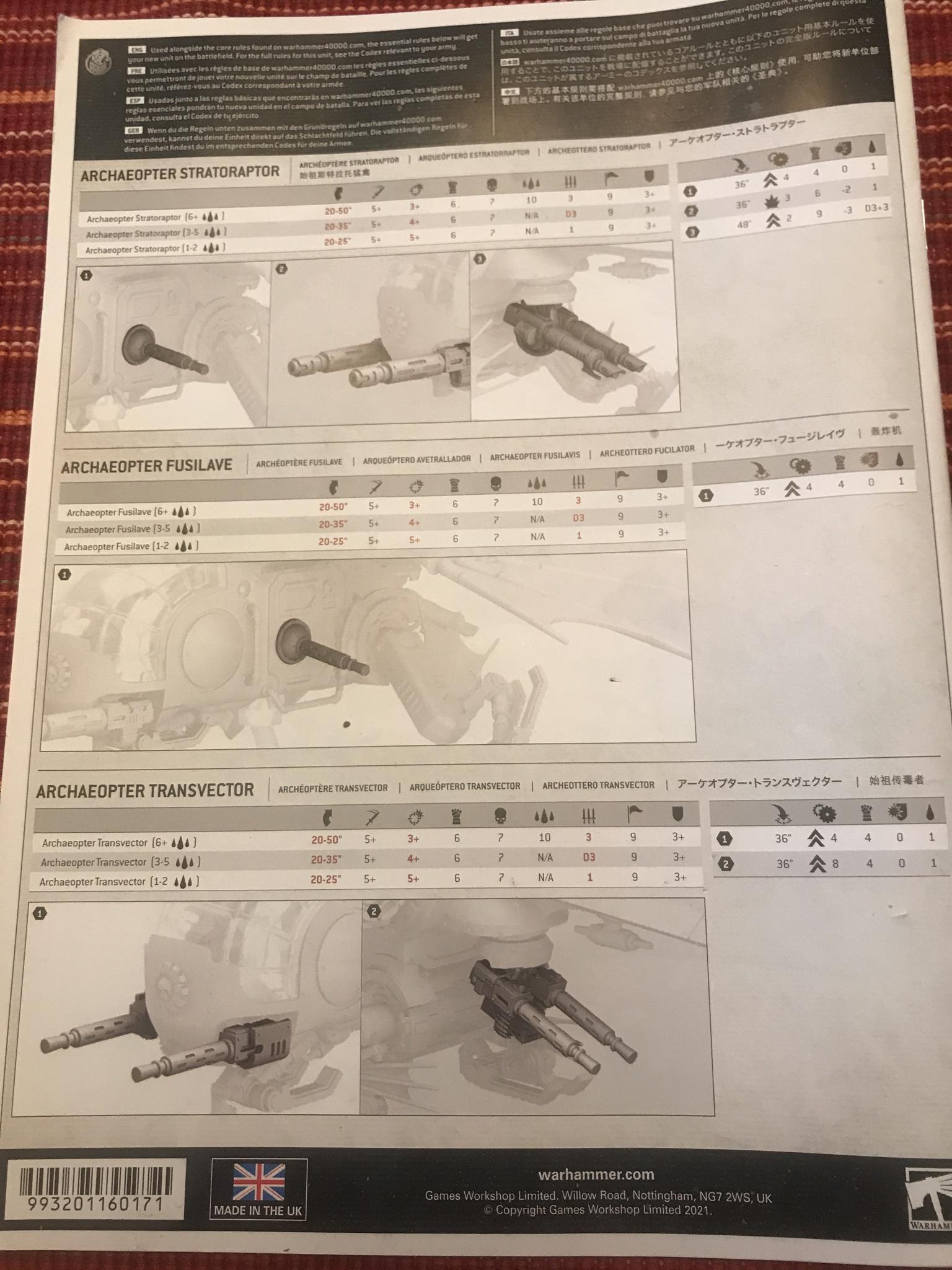 I think those heavy phosphor blasters are conflicting with the shown "twin heavy phosphor blaster" that's on the dunecrawler.  Dunecrawler twin version is 8 shots and 2 damage.  Either one of these is incorrect, or maybe the Dunecrawler version is getting a name change + upgrade?  The barrels on it DO look a little different (bigger/beefier) from the robots and archaeopter if I remember correctly.

Personally I think the Twin Heavy Phosphor Blaster on the Onager is being changed into an improved weapon. It reminds me of how the Tau Broadside used to have petty much the same Railguns as the Hammerhead, but it got split into a Heavy Rail Rifle so that the stats for each unit could be uncoupled. This however appears to be the opposite way round, with the larger weapon receiving an increase in power. I'm quite happy about this improvement to the Onager, but I have a feeling the shooting twice ability on the Kastelans is going to get removed. I hope whatever they replace it with is still good.

I suspect it's a mix of Twin Cognis, general Linked/Twin weapons, and 2x of weapons, that's causing a bit of confusion. Twin Cognis and general Linked/Twin weapons give the combined total in the weapon profile while 2x (or any other multiple of a single weapon) of a weapon provide the base profile and you have to do the simple math for the total. The Phosphor Blasters on the nose of the flyer are two single Blasters while the other weapons are Twin-cognis, for example. Remember that Cognis should provide some other benfit/effect and it's not just doubling the weapon, many Cognis weapons are Linked/Twin, but not all of them.

With this amount of differences I'm betting on the Onager being a new weapon type.  Heck, as you say, maybe the new Onager weapon will be called "Twin Cognis Heavy Phosphor Blaster" to account for the additional damage and shots.  Or maybe "Twin Heavy Phosphor Cannon".

Correct, Cognis is not automatically a Twin weapon but in many cases it will be, so it can seem that way. My point is, as far as I know all Twin or Linked weapons have the doubling of the shots included in the profile, but if a chassis has single weapons more than once the profile is for the single weapon and you do the math for the number on the vehicle. But you're right, in this case it's not a straight doubling.

As I mentioned in the AdMech section to the same discrepancies; it doesn't rule out that there will be distinctions and different weapons (Yay! More obscure weapon variant names!) but I still suspect that some of the confusion is caused by a mix of these factors. Who knows, maybe Cognis now confers a rate-of-fire bonus for AdMech and that's what we're seeing, or it could just be a typo. Regardless, the Omnissiah will reveal all soon enough when the Codex drops.

I guess I don’t know what confusion are you referring to? I don’t think anyone is confused—this is either a misprint or a new weapon variant.

Crazy thing is the thing I am waiting the most for as far as datasheet leaks is the Breacher/Destroyer type leak which I think will tell us a lot about the state of the non-Skitarii troops and give us a lot more insight as to the style of board control Admech will have to rely on in 9th.

Crazy thing is the thing I am waiting the most for as far as datasheet leaks is the Breacher/Destroyer type leak which I think will tell us a lot about the state of the non-Skitarii troops and give us a lot more insight as to the style of board control Admech will have to rely on in 9th.

Huh, I'm the opposite.  I'm curious about Skitarii more -- they've been pretty bad for a while now, and they have lots of weapon options. 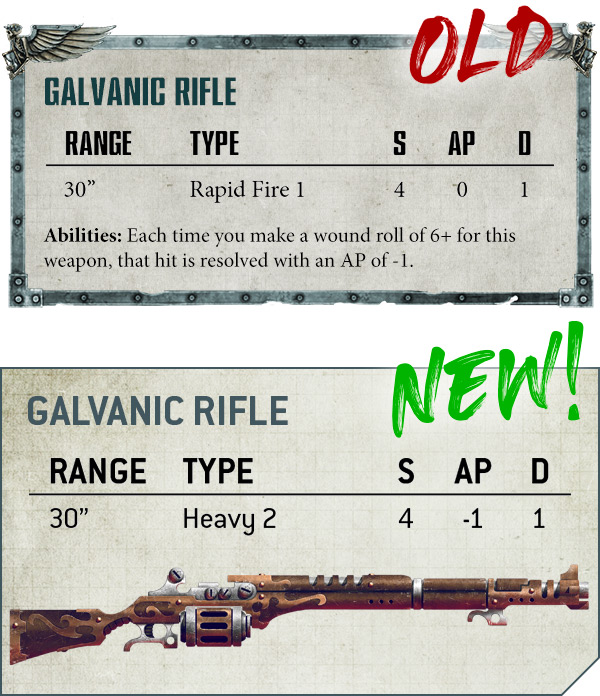 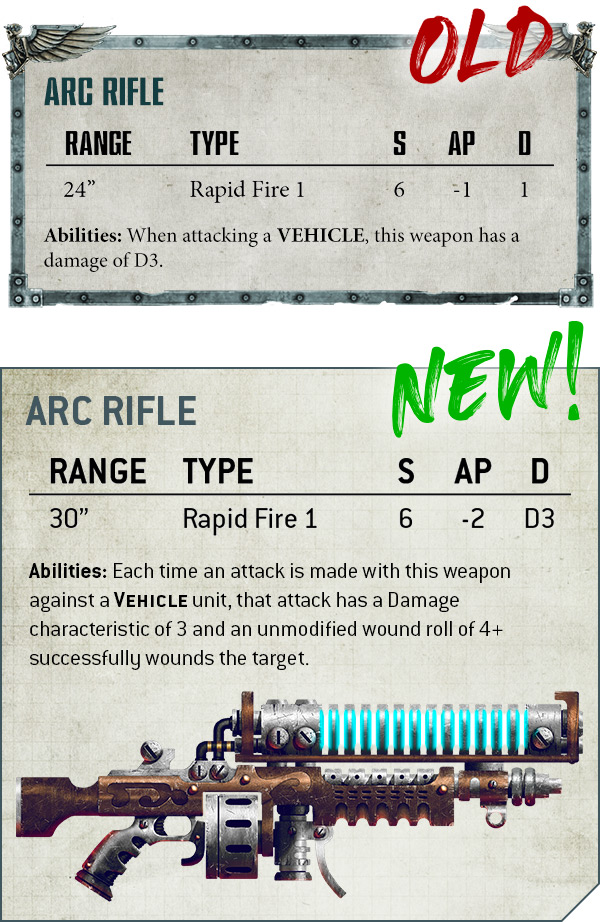 The melee versions of arc weapons also get the new benefits against vehicles, giving your Kataphron Breachers a punch that will be sure to charge up your force. These aren’t the only close combat weapons to get a boost either. Transonic blades and transonic razors now scythe through armour with wild abandon, having gone to AP -3 for blades and AP -2 for razors. Your Sicarian Ruststalkers are now a major threat to even the most well-protected foes, not to mention that they’re now every bit as awesome in-game as the models are to look at. 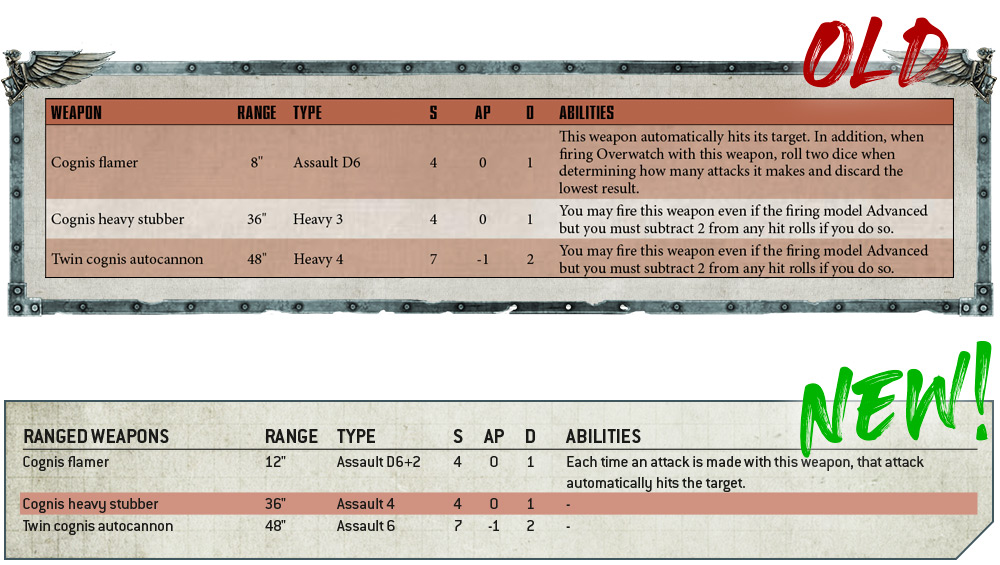 Twin cognis lascannons don’t fire more shots – two is quite enough for heavy laser weapons that can blast a tank apart, really. Instead, they’re now Assault weapons rather than Heavy, making them easier to fire on the move, and their damage has gone from D6 to D3+3, meaning they can more reliably bore through those enemy vehicles, doing at least 4 damage per wound. Pew pew! 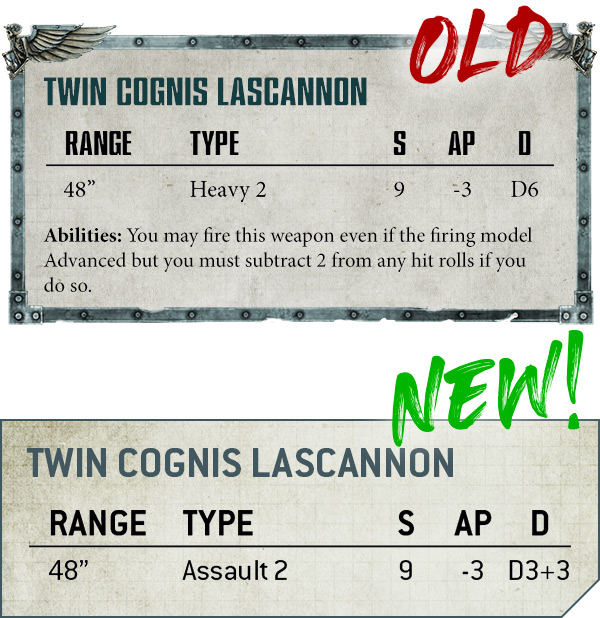 The torsion cannon that Kataphron Breachers can carry in place of their heavy arc rifles has had a similar upgrade, now doing D3+3 damage – and its range has doubled to a mighty 48”. We don’t know what the Tech-priests did to make this happen, but it’s going to lead to loads more enemies of the Imperium being twisted in half, so we reckon the Omnissiah will be cool with it.

The other Kataphron unit, Destroyers, have also received a handy upgrade – the ability to supercharge their plasma culverins without the risk of instantly blowing themselves up. Now those pesky 1s will only cause a mortal wound, making supercharging less an act of martyrdom and more a valid lifestyle choice.

Substantially improved dakka for sure

I like the changes for many reasons, but mostly because I think it gives meaningful choices.  For example:

I also think the kataphron weapon buffs make sense with what I'm guessing is a nerf to Cawl's aura (along the lines of other re-roll hits).  It will be interesting to see what other changes there are and how the points reflect those changes.

The torsion cannon change feels thematically weird - the division between destroyers and breachers was that the former were backline fire support, while the latter were more resilient and in-your-face. Giving the Breachers a 48" weapon just seems odd.

That galvanic rifle is a lot better. Lol I have mostly Vanguard in my army, unfortunately.

Great changes overall.  Pretty much across the board improvements to weapons that were definitely lacking.  Plasma on Kataphrons no longer being suicide is a change that is waaaaaaay overdue.

I'm mostly excited to see what happens with Sicarians, Onagers, Kastellans, and the Datasmith.  We now know Ruststalkers get additional AP, and Onager weapons are improved, but those two need some additional help to be competitive.  Something with stratagems or abilities on the datasheet.

I'm really interested to see what they do with the Kastellan + Datasmith interaction.  I'm assuming the double-shoot will be gone on the robots.  The Datasmith was never worth it because of the huge delay in the ability to switch programs.

I like the heavy change to the galvanic guns. Makes them seem more like the old type line infantry muskets. Losing rapid fire hurts obviously but fluff wise it fits, and game wise they should be back line anyway.