A while back I experimented with some new Space Marine paint schemes and found one I liked. I just was happy with the one I had originally chosen. I finally let loose the arrow to land where it may. 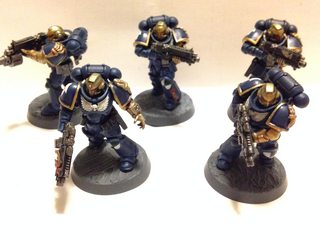 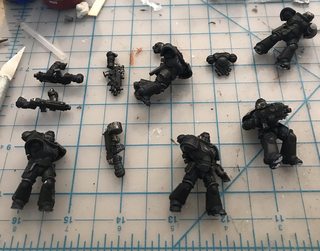 I've come to appreciate assault bolt rifles and so some conversion work was set upon. I made some simple molds of drum magazine made from an Astra Militarum grenade launcher (originally used as an underslung grenade launcher for the Intercessors). 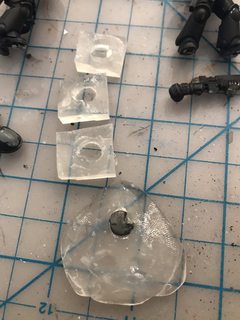 Some GS, clipping, and gluing later:

And of course since Dark Imperium came out the Sergeants have weapon options... 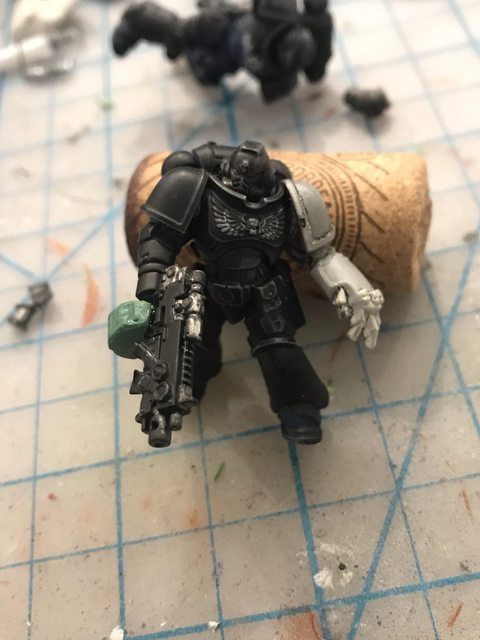 Primed with Leadbelcher, drybrushed with Runefang Steel, all over with Seraphim Sepia, all over with Agrax Earthshade. Blocked in the Vallejo Black Green (over Mechanicus Standard Grey) base color for the pauldrons.

I didn't firmly attach the models to the corks so I ended up painting the top halves then the bottom halves. So the bottom is without washes. 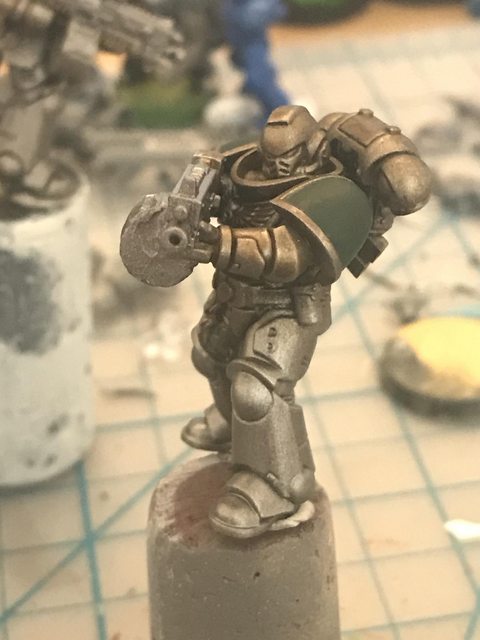 Now at this point I have a conundrum. Is the red bolter housing too busy; should I go with a more neutral off-black? 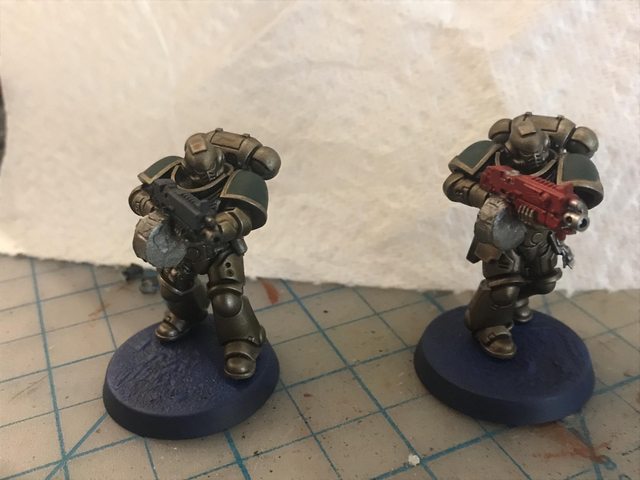 The squad and chapter markings are going to be red, if that makes a difference.

I quite like them both but prefer the black one without seeing the markings. I think the red one as it stands draws the focus from the marine to the gun because that is what my eye was first drawn to. But the addition of the red squad markings and icon could change that quite a bit and balance it out so it might be worth adding those then ask again.

It's hard to say without seeing the squad markings; currently I feel like the left kind of blends together and turns into a grey blob, visually, whereas on the right the bright bolter provides a focal point even if it isn't the head. As it stands now the right has my vote, but you never know how the squad markings will change things!

Thank you all for the advice! I put on the decals and the result was underwhelming. I'm guessing it's hard to have a really saturated red decal? 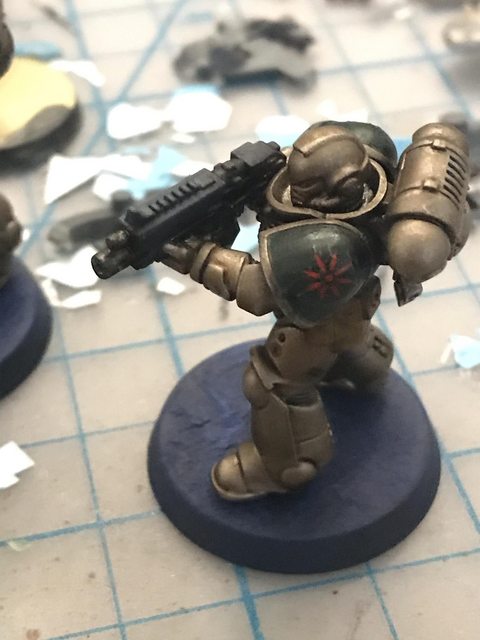 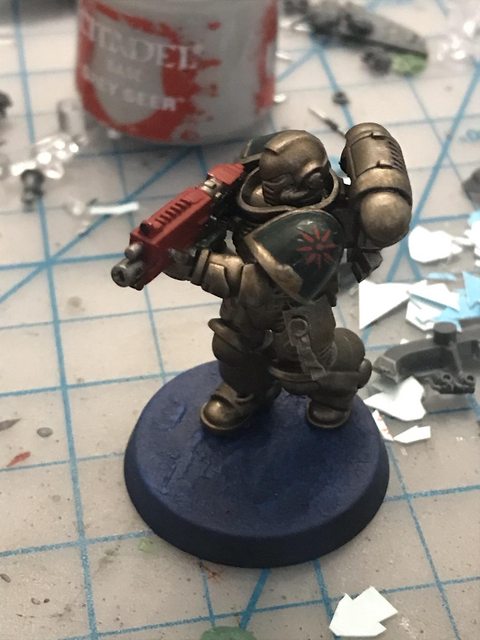 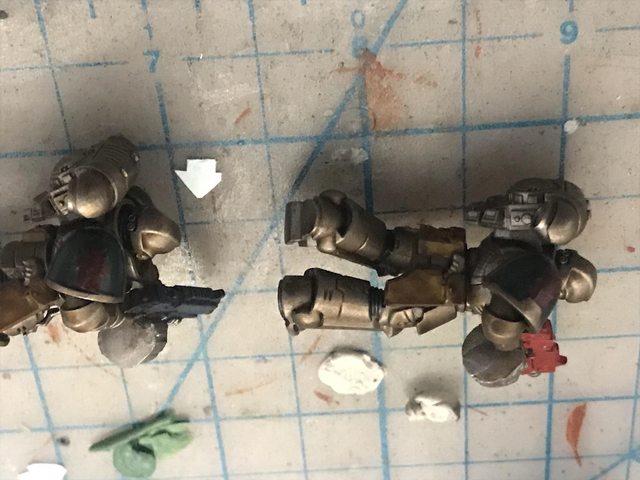 I'm going to try a bolter matching the pauldrons next.

Update time! I ended up going with Wild Rider Red brought down by Nuln Oil. I treated it kind of like an oil wash, reabsorbing the Nuln Oil from the flat surfaces to thin it down to where it muted the red, but wasn't black. 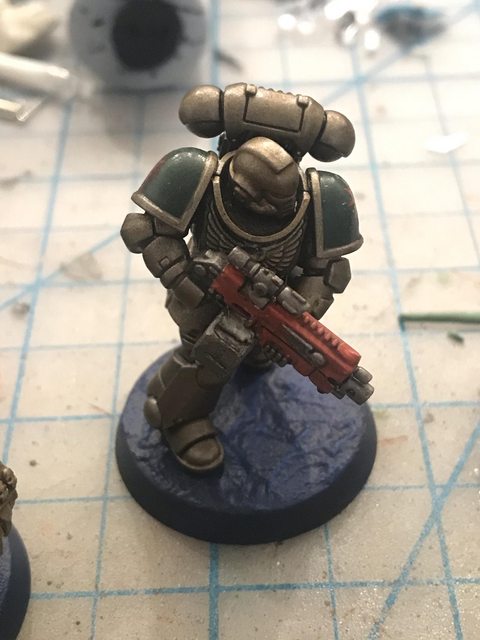 The transfers... I did the squad for uniformity, but... well, see for yourself. 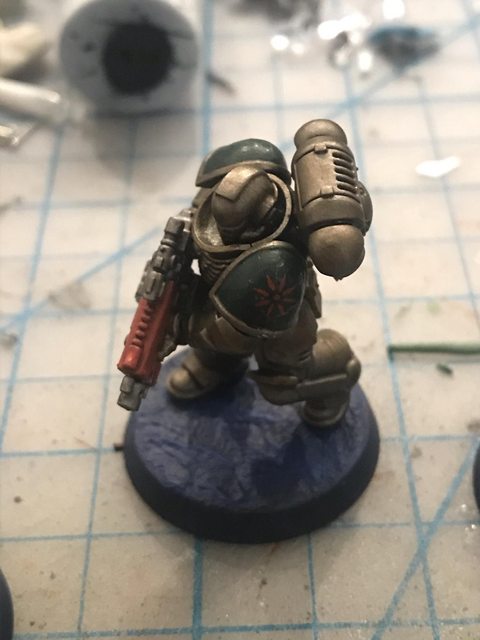 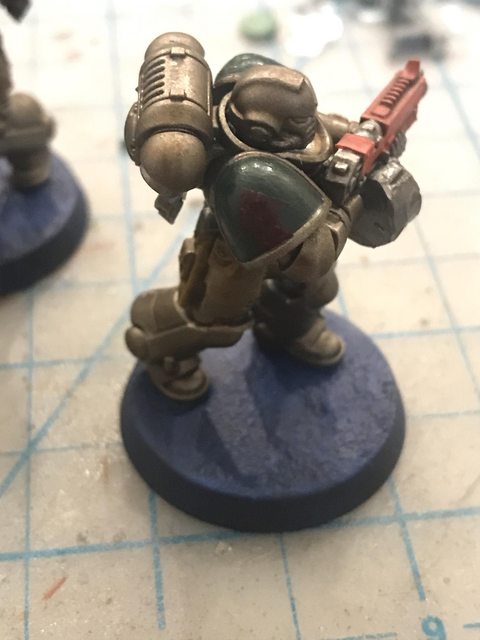 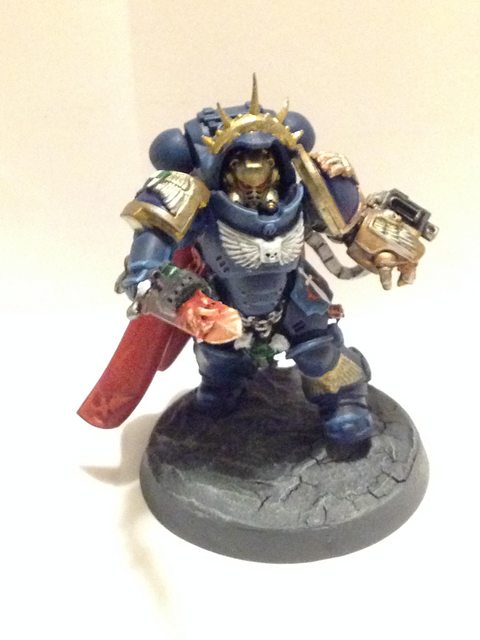 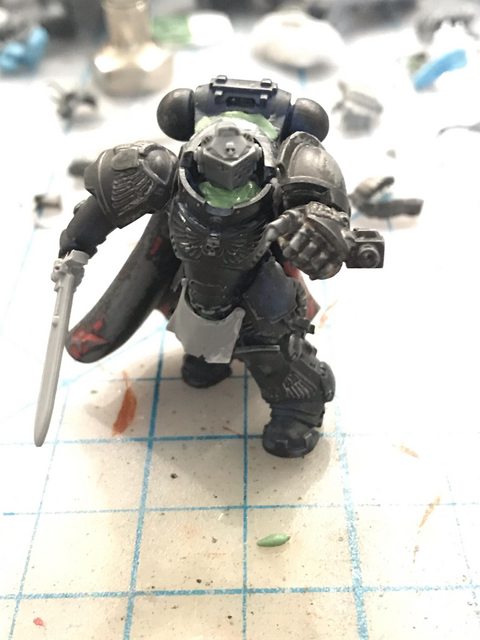 Still need to do the GS for the ammo belt and decide if I want anything behind the head or just clean that area up a bit.

Brief update as I've started putting colors down. I was curious about the decals over white and then painting green around them. I'm digging the white. 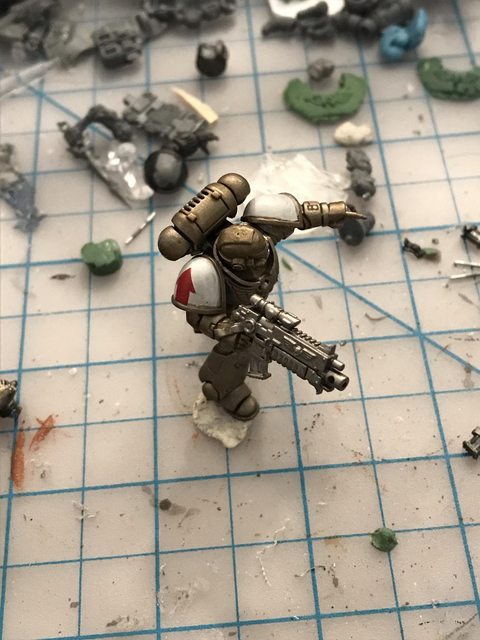 And the Captain got some paint too: 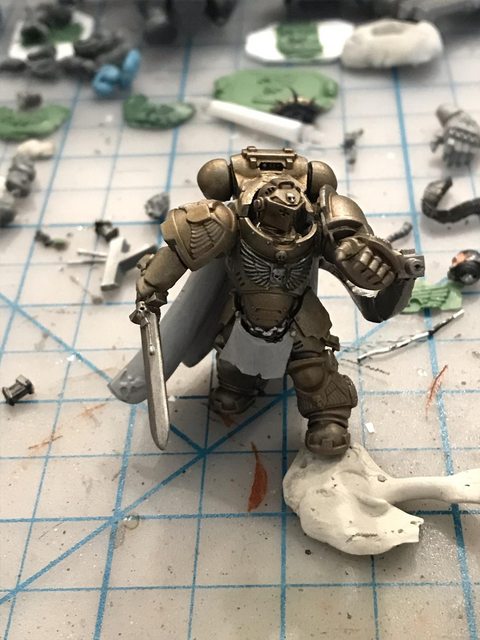 Good work so far! I think the white looks sharp personally with the red symbology.

Brief update as I've not had much time for painting lately. I tried out Guilliman Flesh at full strength and at 1:1 with Contrast Medium for additional shading on the chest eagles. 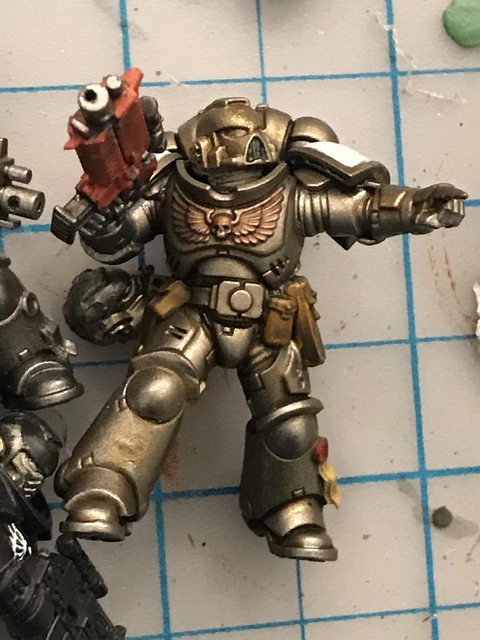 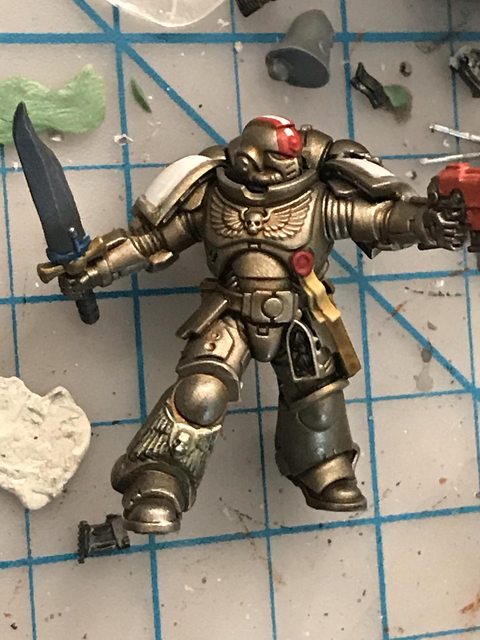 I tried out something a little different for the four I did for my second re-done squad. I painted the Imperialis on each with Liberator Gold before putting the Seraphim Sepia over the entire model (to get the soft bronze look on the Leadbelcher base coat). I finished it with 50/50 Guilliman Flesh and Contrast Medium. 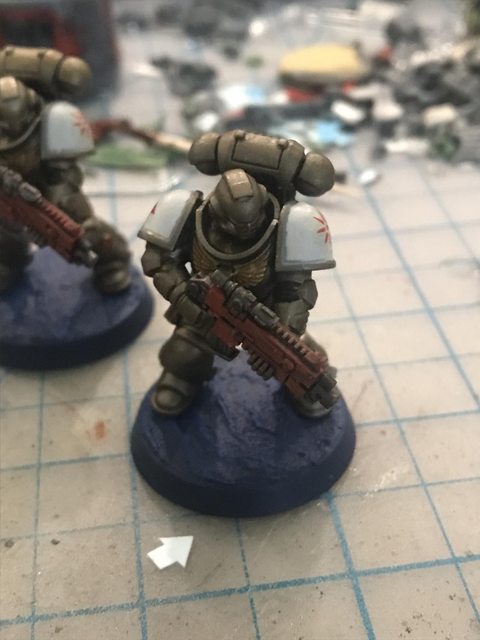 I sniped a Bladeguard Ancient on ebay because the price was too good to pass up. However, I don't like the walking reliquary look for he's got going on. Instead I plan on using the robed body to make a Primaris Librarian. Here's the start: 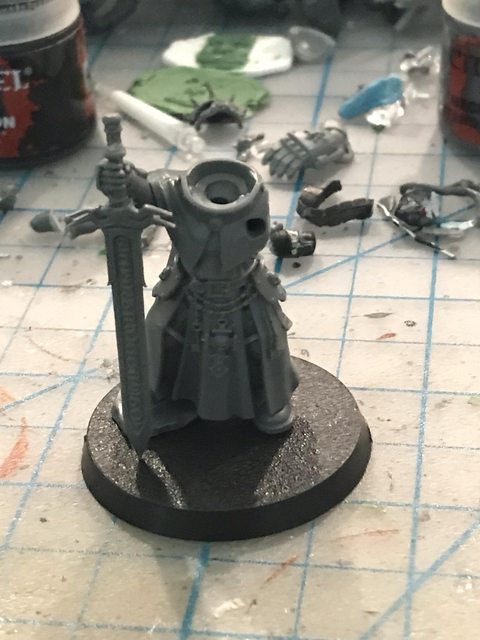 Not sure what I'm going to do for the head and psychic hood yet. I'll do some green stuff work around the hand and handle to make the cables connecting the sword to the armor. 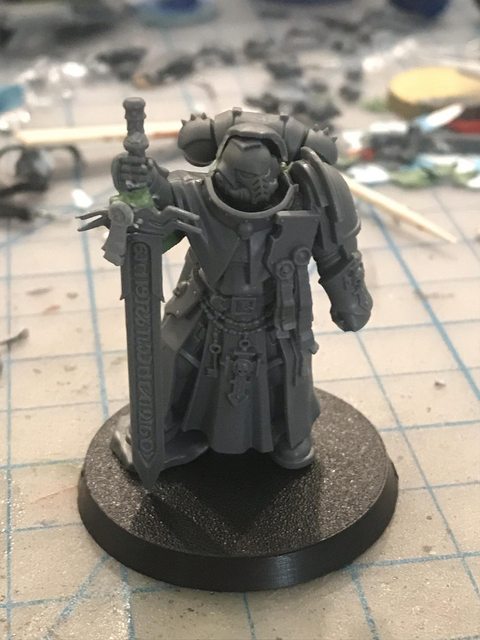 The GS behind the purity seal (on the sword hilt) is part of the cable (obscured by the arm and sword) leading into the armor.

I also put a Bladeguard robe on the Dark Imperium Ancient - jeez am I happy I hadn't rushed through putting that all together. I like that the Bladeguard Ancient is Ancient+1, I just don't like the model and all the bones for my chapter. I have a whole thing about how they view the dead and it is most definitely not "put them on a pole." 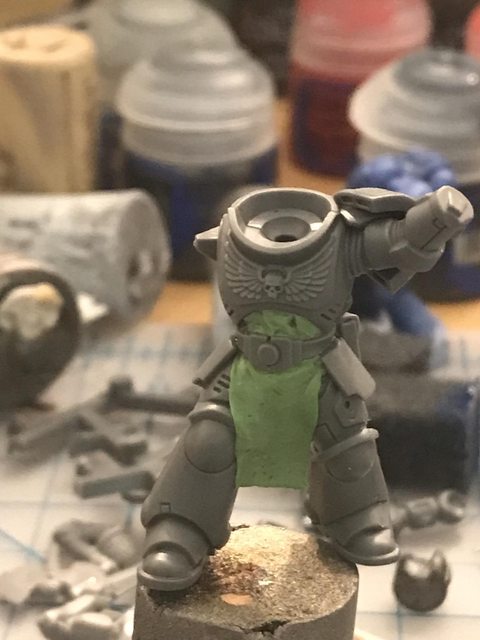 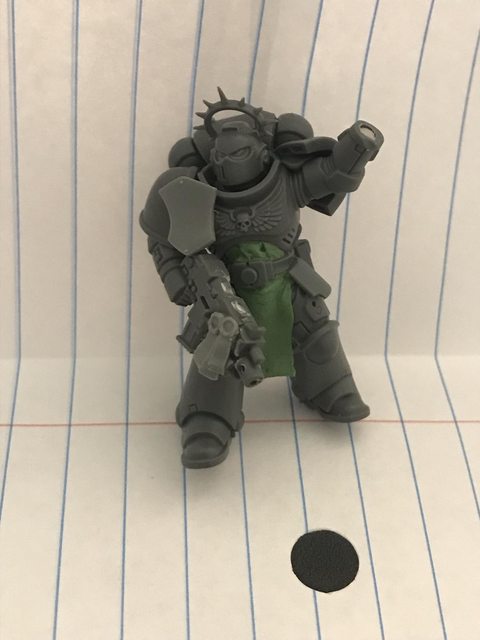 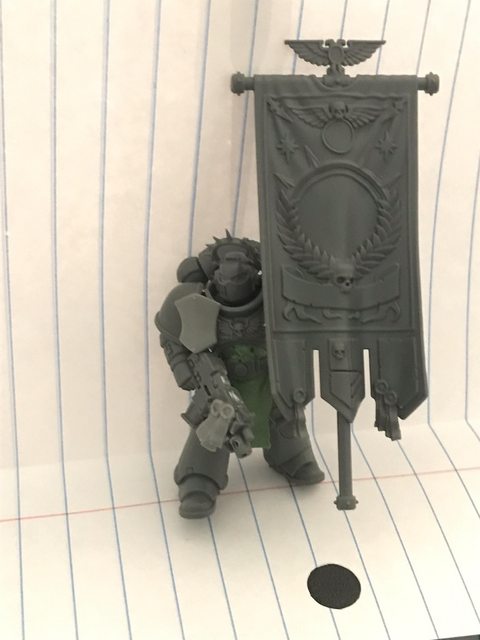 I gave him the Bladeguard Ancient head, shortened the bolt rifle to make a heavy bolt pistol, added a Terminator shield, and magnetized the arm (easier painting and transport).

This project is going on hold for a bit. It was a nice palette cleanser from all the dirty green I was doing for Nurgle Daemons, but I want to try to get most of those done before diving fully into a power armor project.

I'm a sucker for a cut-down boltgun. The end result looks really good! Reminds me a little bit of some old metal models. Nice work!

I have done a lot of Nurgle, but finally reached the "this is a complete force" point and can take a break. The Black Templar hype is real, but I know for a fact that the converted Librarian won't be wearing the black of a Knight of Sigismund. I often just go with the flow when it comes to one-offs who have some part of the paint scheme that is different from the rest of the army, so not as many pictures of the process.

Kantor Blue base, mixed in some Phalanx Yellow for the next layer. I heard that using a warm color to bring up the hue of a cold color can improve contrast. 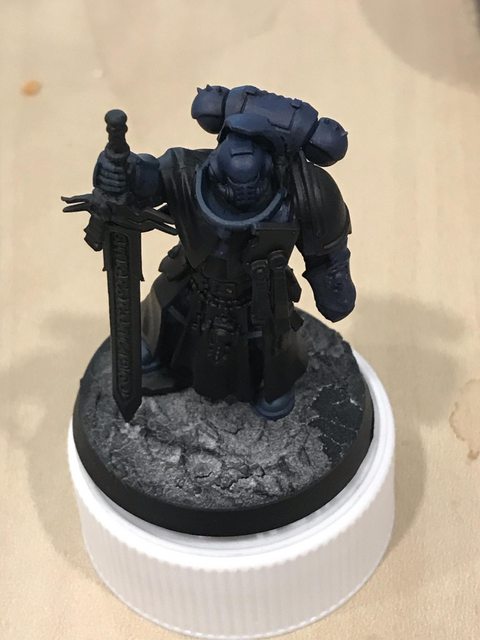 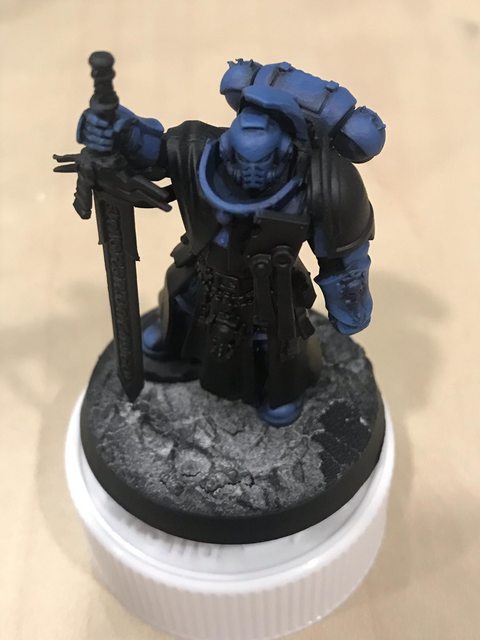 This is my first time painting up significant portions of a mini without using washes and shades in quite a while, but I'm pleased with the result.

I had the idea to have the robes be the same color as the normal chapter armor. 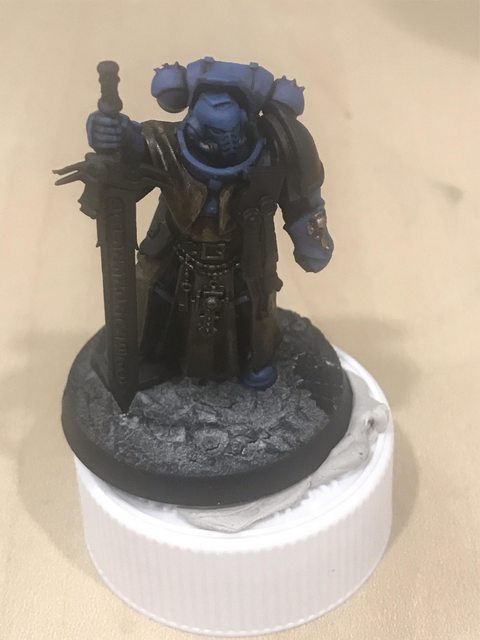 Not entirely sold on it.

Also tagged with one or more of these keywords: DIY, Primaris, Space Marines, Astartes, WIP