I have finally started this long-planned project!

I have loved the Eldar line for some time, specifically the tanks. However my true favorites are the Dark Eldar reaver jetbikes, which has led me down the "darker" of the two paths instead. Fortunately the lore I have found on the craftworld color scheme I like the most lines up perfectly for this project. 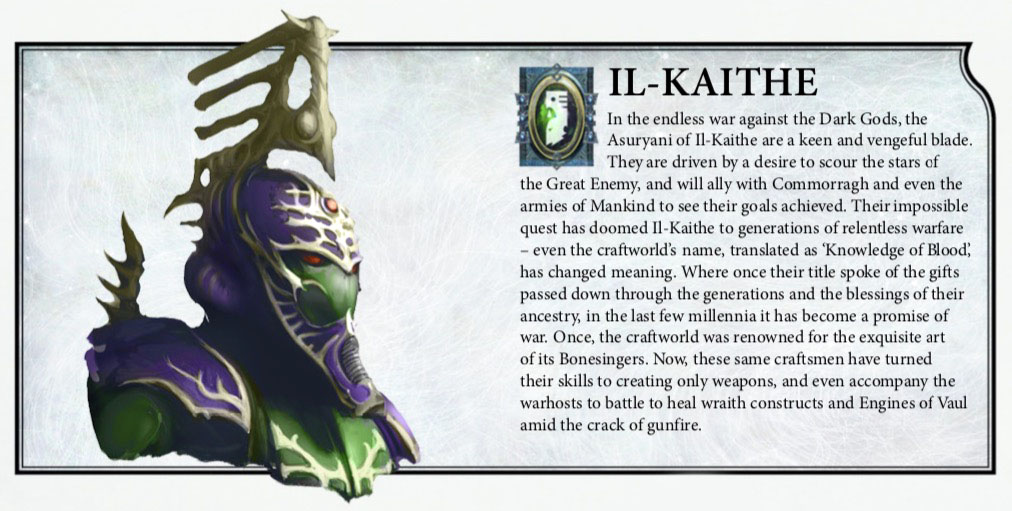 The plan is to build a force from Craftworld Il-Kaithe who blur the line between "dark eldar allies" to the point where the difference between the two is indistinguishable. Items I intend to run in my future list are kalabite warriors/wyches with some Eldar guardian bits, along with wave serpents and other Eldar tanks to count as raiders/ravagers, and of course plenty of reaver jetbikes.

Some color scheme tests (will make the infantry look more like the two on the left):

The first two purchases for the project were these cheap tanks I bought from a local store that had them on sale for years on a shelf:

After some assembly and priming, my first few infantry and biker models are ready for painting:

I have started converting and painting up my first Raider/Wave Serpent:

The tank's turret is magnetized along with the two riders hanging off the sides:

Here it is after priming and initial paint coats:

And here is one of the infantry models after a few coats of green, a wash, and some test purple:

We will see how this goes, looking forward to painting more over this next month.

Oh man, these are very rad. The variance in the scheme and bits looks amazing and coherent force. I'll be watching this very closely!

Forgeworld Amethal - Finding the way for the Omnissiah

Thanks! Got a little more painting progress to show. Basecoats on the infantry are done along with initial wash, next is to add to the purple and green some more.

I am worried about what colors to make the weapons. Based on the army scheme pictures the weapons should be a bone color; however I am afraid that if they are colored bone they will blend right in with the skulls on the vehicles too much. I am also thinking to paint them a more metallic color scheme; probably boltgun metal with a few washes?

Also have a first green wash down on the Raider/Wave Serpent. Paint was way too thick on the light green

Consider black with gold bits for your weapons. Both colors go well with green and purple.

Thanks! I may wind up trying both.

No painting progress worth sharing yet, but I finished converting up my Archon.

Process starting with chopping Fuegan in half:

After a miliput abs workout and a few extra wires/bits he is now complete, and stands quite a bit taller than the rest of the deldar!

I magnetized the sashimono so I can paint it easier. I may do this for the rest of the "commanders" of each squad too, but they will probably have their banners made out of paper.

Going to have fun painting him!

Little easier to see this guy with some paint on him, now that he is finally base coated.

Slowing working on the tank now that I got some Ushabti Bone for the bones.

The highlight I used for the purple made the helmets look a bit more red than I preferred but its not bad, but I need to do some more work to not make the backpack highlights as sharp. I also need to figure out how I am possibly going to paint those eyes... they are so tiny! I dont think I have any brushes small enough to even get close... need to figure out what I will do for these.

I also need to go through and do all the gemstones red and blue, as well as the bases.

I am more happy with how the first tank is shaping up:

Painting the bone was extremely satisfying and are the best parts of this tank so far. I still need to go back and redo the light green, and shape up the rest of the darker green/blue tiles.

Also does anyone know what necron blood looks like? Might do some oil stains under his spine...

As for the blood, I've always thought something like transmission fluid red. As far as color goes, they are alien so maybe their cars had some other colors so maybe a green or blue tint may be it. Let us know what you decide.

After a bit more painting and practicing really tiny highlights and I finished the first four models for this army. The two kabalites are fully painted up, just need a base to be complete:

I had fun painting the gems and the purple. It was a struggle at first as I had to redo two of them when the highlights made them present as pink instead of the purple tone I was going for.

I need to experiment more with making drukhari runes too.

The two hangers-on to the raider are also complete!

After painting these two I am very much looking forward to painting up the wyches!

Need to finish up the rest of the tank and kabalite unit next.

I had my doubts about your color scheme, but you are making it work.  Have me thinking of following suit with my Eldar.

This is a very cool color scheme. It fits very nicely, and harkens back to the later 80's/early 90's style. Very cool indeed. Can't wait to see more.

My Deathwatch has me distracted at the moment, but I hope to get back to painting some more xenos soon.