With the release of the plastic Sisters I felt the urge to start yet another project, and so bought a box of them along with some other bits and pieces. However, the lack of a modelling space left me with loads of ideas I had no means of actually putting into action. Fast forward a bit and I have my desk and work area assembled, and have since been butterflying from project to project, never getting anything finished as is the norm.

Anyway, I finally got round to doing some actual work on the Sororitas, and thought I'd start a log on them in a vain attempt to motivate me to get work done on them. I seem to recall I tried doing that before...twice...but umm, third time's the charm?

So first a bit of fluff for them:

Spoiler
The Order of the Ivory Musket (see "Post your orders millitant!"), by its nature as an organization made in part of Sisters from defunct or lost Orders, is an incredibly diverse and unique fighting force. Sisters from all different parts of the Imperium with all manner of temperaments and minor yet notable variations on the Imperial Creed fight side by side, all driven by a common goal; the defence of Mankind, service to Him on Terra, and bringing the light of the Imperial Truth to the darkest corners of the galaxy.

Many of the Sisters of the Ivory Musket have suffered greatly, having lost their comrades and their home shrine worlds to the foes of man, and in their hearts burn the fires of a need for vengeance. Whilst the Order is known for its charitable work and a focus on the teachings of serenity and stocicism from their parent Order, the Sacred Rose, for some the desire to enact retribution against those that have caused them and their fellow Sisters such grief is overwhelming. For these women, there is but one path to take- induction into the Unbroken.

An elite cadre of specialists in the Order, the Unbroken are made of those who have the skills, strength, willpower and faith to seek and destroy the absolute worst of mankind's enemies; and often those within Imperial institutions. The decision to join this sisterhood is not taken lightly, for they face dangers to mind, body and soul utterly unimaginable by most. But for those that prove themselves worthy, the opportunity to settle vendettas against the alien, mutant and heretic and to bring low the most grave threats to the Imperium are theirs for the taking.

The Unbroken are not a frontline force; they will occasionally work alongside the main contingents of the Ivory Musket, especially for humanitarian aid missions, but their role as a militant unit is to root out the tendrils of corruption in the underbelly of the Imperium; everywhere from seedy hive worlds, backwater agri-worlds and even seemingly spotless cardinal worlds. Their numbers are few, but they are equipped with the best the Order has to offer and are trained in special combat techniques. They will often work with other Imperial agents, including the Inquisition, Officio Assassinorum and even Astartes.

I should mention that as this is intended as a warband for things such as Inquisitor, most of these girls are not equipped for Codex-use, and in some cases aren't even based on Codex units at all! For the most part this is an exercise in creating cool models, and the chances of this evolving into a full 40K army are incredibly slim.

First up is the de facto leader of the Unbroken, Sister Superior Gaelle Valentina. An exemplar of the Order's virtues of stoicism, charity and utter fearlessness, Gaelle is kind and caring to a fault, always placing the wellbeing of her Sisters first and devoted to them completely. This is not to say she is some kind of pushover or softie however; she is incredibly resilient and will strike down with great vengeance those who would threaten her Sisters. She's armed with a power fist (actually made from a cleaned up OOP Chaos Space Marine part!) and bolt pistol. 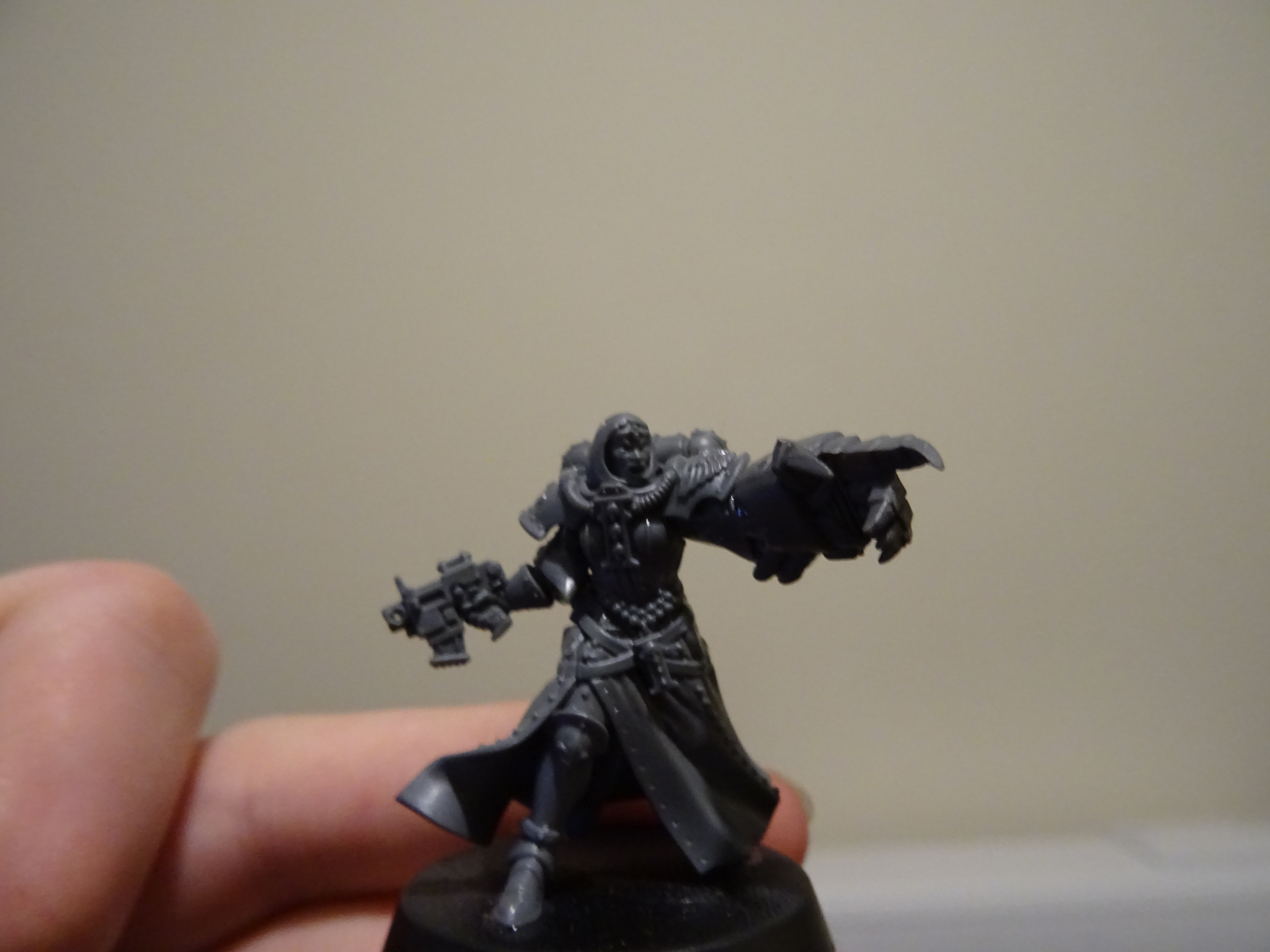 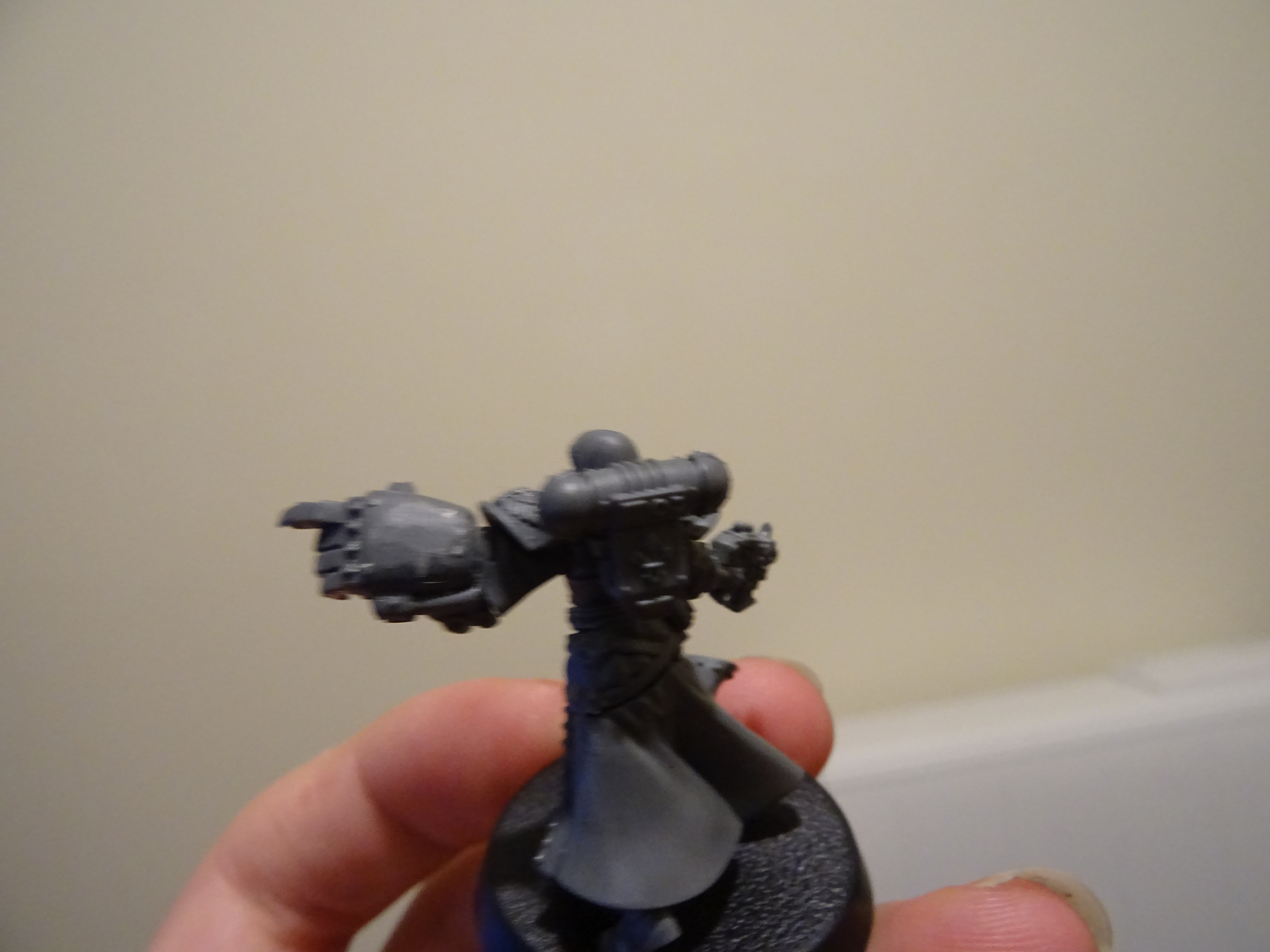 Next is Sister Sola, bearer of the Lantern of Hope. This sacred beacon is an immensely potent relic of the faith, filling the hearts of the Unbroken with passion and courage, whilst striking fear into evildoers. Indeed, Sola herself is ceaselessly positive and is a lynchpin of the team, providing levity and cheer where otherwise there might only be darkness and despair. The Lantern's blessed flame is also utterly anathema to the servants of the Ruinous Powers, and a well placed burning bonk is very effective for banishing the daemonic. Her Lantern is made from a Nighthaunt Guardian of Souls (the one available in Soul Wars, or in my case the Hachette's Partworks magazine) with a skull added to lengthen it a bit for clearence's sake. 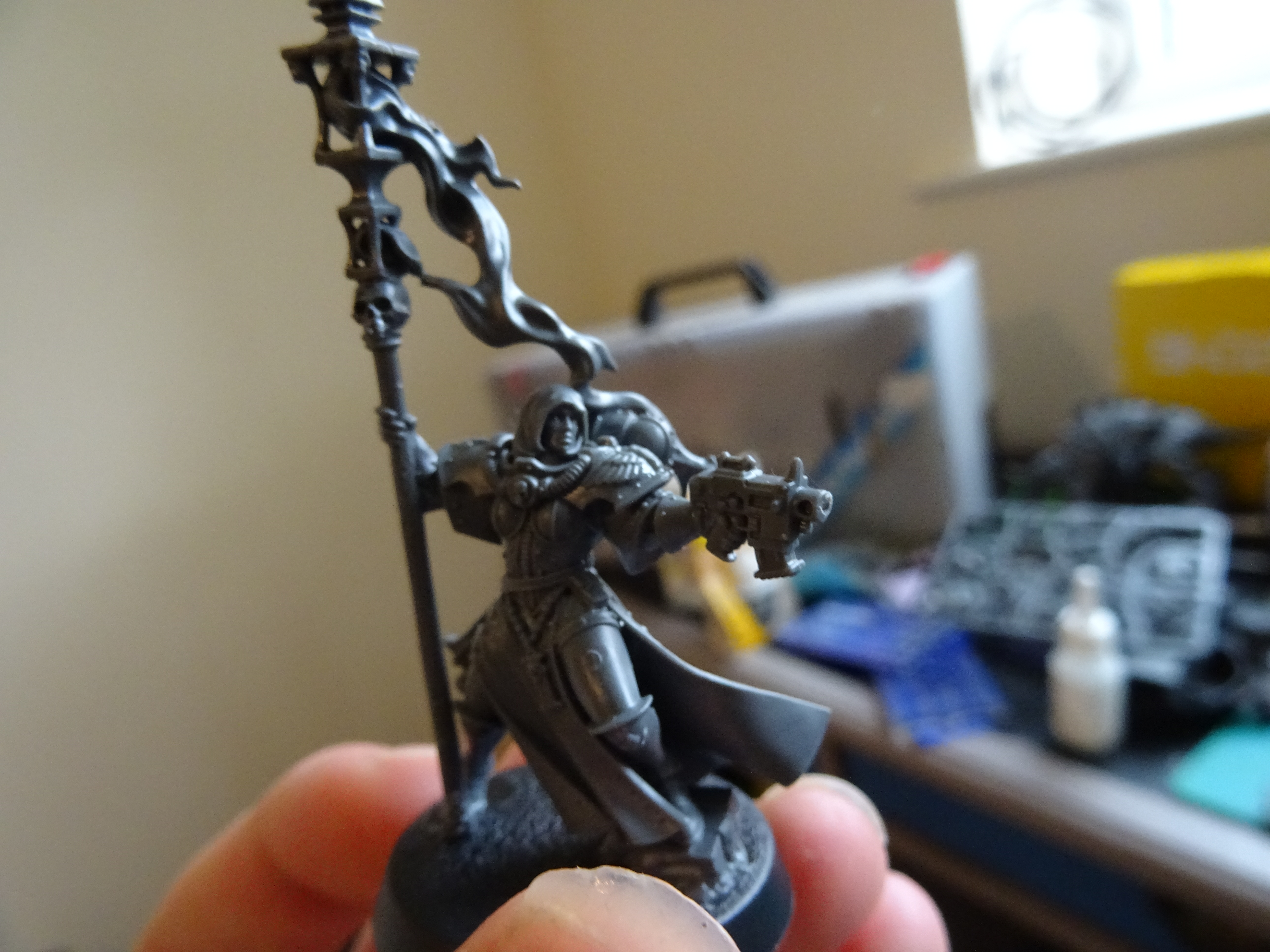 Then there is Ancient Sister Matilda Berthier, entombed in the holy chassis of an astonishingly rare Mk. IV "Castra-Ferrum Ignea" pattern Dreadnought. As much valued as a mentor as a warrior, when not on operation with the Unbroken she guards the Heroine's Rest, the crypt for the honoured fallen of the Order. Unfortunately due to her sheer age and the questionable nature of the Ignea's neural interface (one of the main reasons the pattern was discontinued after a short production run), her mind is not what it used to be... (which incidentally you could represent in INQ28 by giving her a "poor quality cybernetic head", at least assuming you can find rules to run Dreadnoughts!). Made from a Mk. IV Forge World Dreadnought with Inferno Cannon and CCW, with a few very minor additions in the form of a Celestian helmet in place of the regular head, and a padlock and skeleton key from the Hachette's Spirit Torment. Probably not going to add any further embellishments to her as I don't like overly busy Dreadnought conversions, and also I am utterly enamoured with the slab-sided beauty of the Mk. IV. 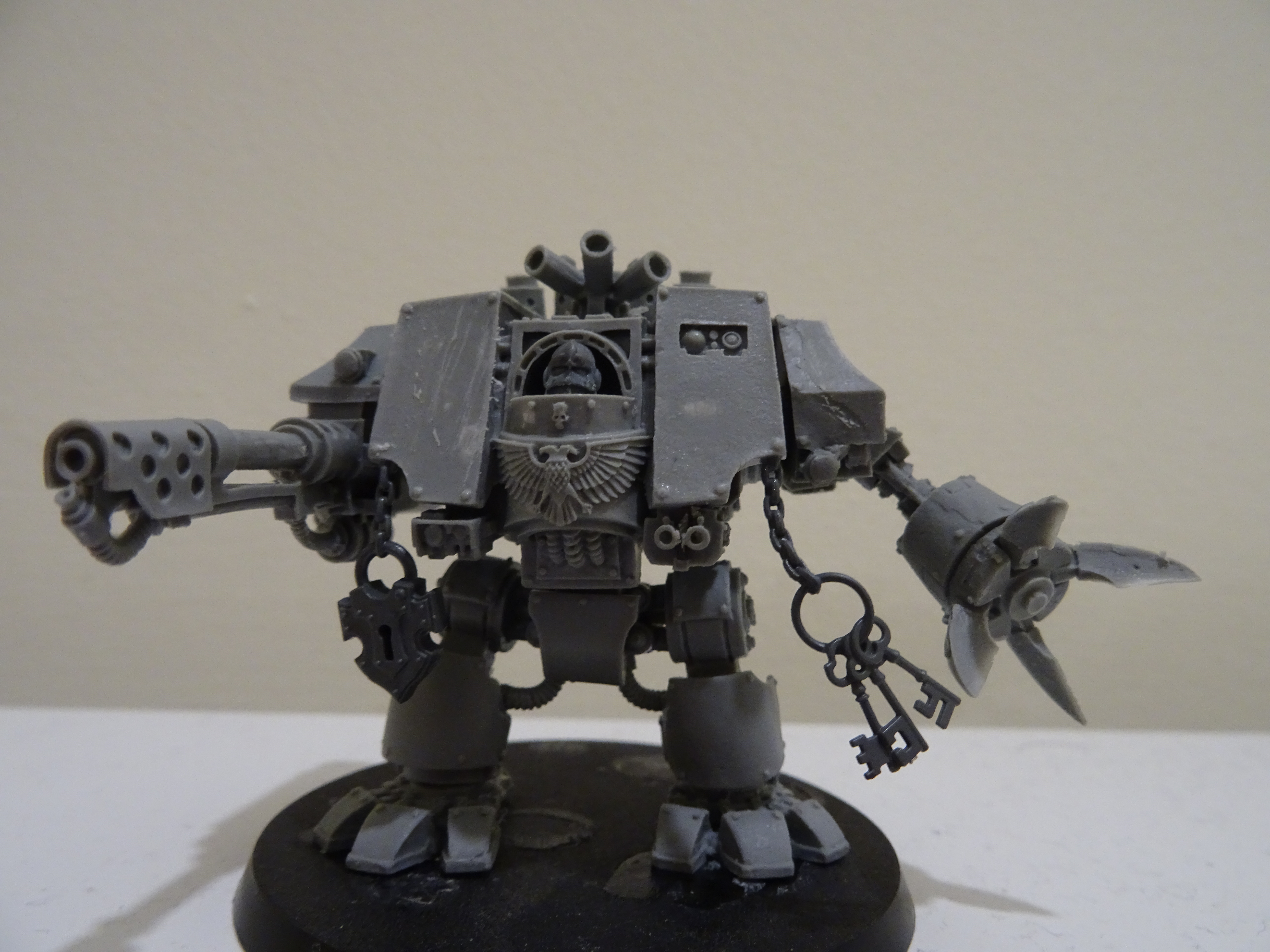 Finally (for now) we have the Penitent Engine known only as "The Griever". One of only three survivors of the Order of the Gleaming Spear, she was so utterly overcome with survivor's guilt, grief and holy rage that she demanded that she be crucified on this war machine, itself a particularly old example of the type, to better bring death to the foes of Man and avenge her fallen Order. Due to the unusual nature of her request, and the fact that as she had technically committed no wrongdoing she would not qualify for becoming a Mortifier or Anchorite, she is one of the only Sororitas affixed to a Penitent Engine, though the actual device has been somewhat modified. Notably it possesses a conversion field to protect her, and a lot of the guillt and pain infliction devices have been removed as the Sisters Technicia felt it would be utterly unnecessary given the circumstances. Unlike more or less every other Penitent Engine or Mortifier, she is viewed with awe and respect, if a little pity, by her comrades due to the entirely voluntary nature of her crucifiction. To the others, she is pure in the eyes of the Emperor, and is a living icon of piety and zeal. She also exists solely because I found a decently priced metal Penitent Engine on eBay and couldn't resist. I have since primed the Engine itself, and so this photo is out of date, though she remains in those sub assemblies for ease of painting. As a side note I somehow assembled her without a single pin and I have no idea how- she's held together entirely by superglue and faith in the Emperor. 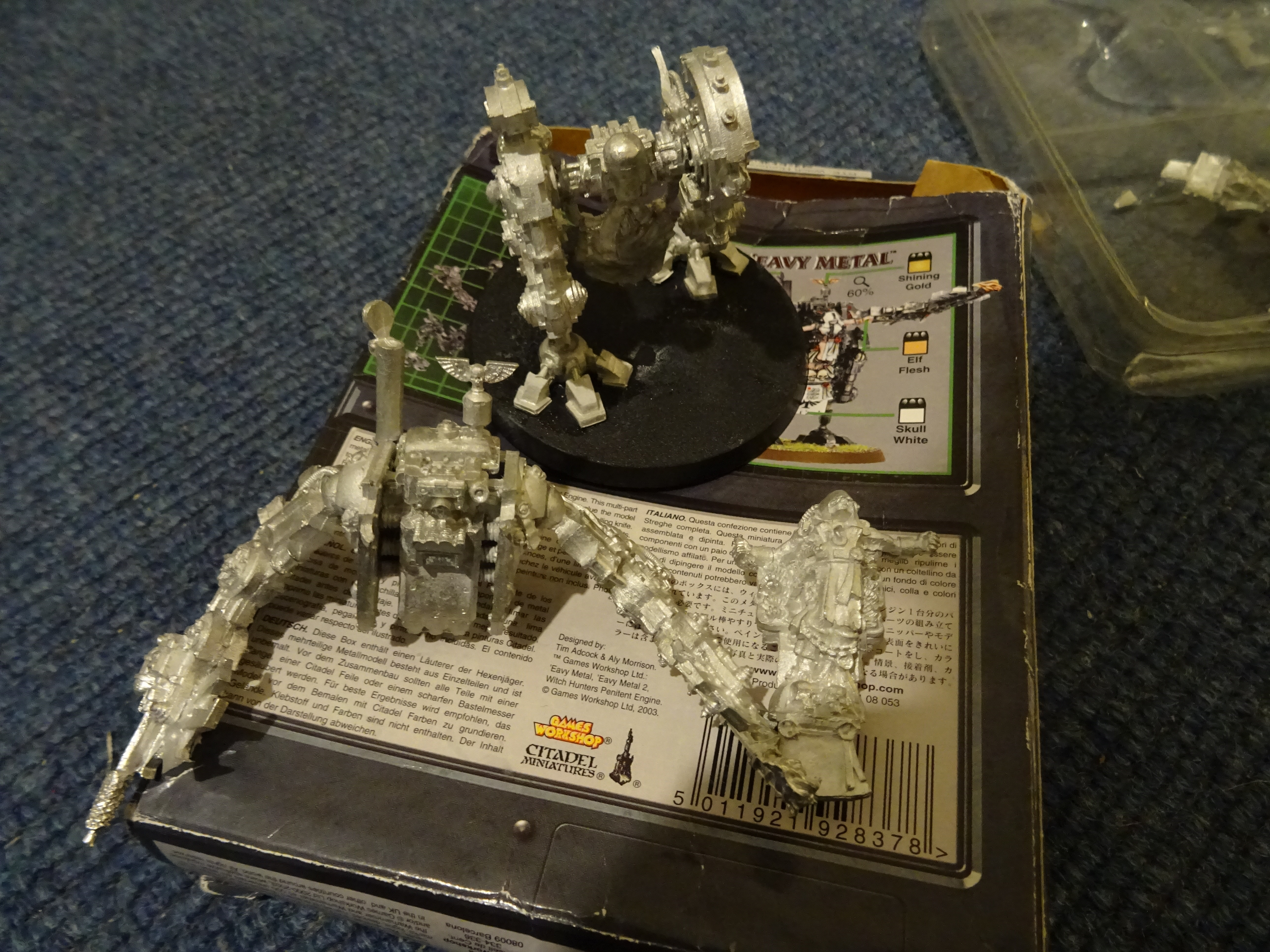 The models look promising. I commend your efforts on them and their backstory.

Sister Lailani, formerly of the Order of the Virtuous Deed. She only escaped the fate of the majority of her sisters by virtue of being on a sabattical mission offworld at the time with a few others. Feels a huge amount of "survivor's guilt" as a result. Carries one of the few surviving relics of her Order, a simple missionary's guide which she almost compulsively reads quotes from. This book is actually immensely practical, however; it is equal parts sacred text and survival guide, and aside from providing uplifting verses and scripture, it also contains a lot of information on dealing with people from remote/backwater worlds. This, combined with her knack for languages and friendly demeanour, has made her invaluable in negotiation and diplomacy for the Unbroken. A very simple conversion consisting of a Sister with a book taken from the Empire Wizard kit. 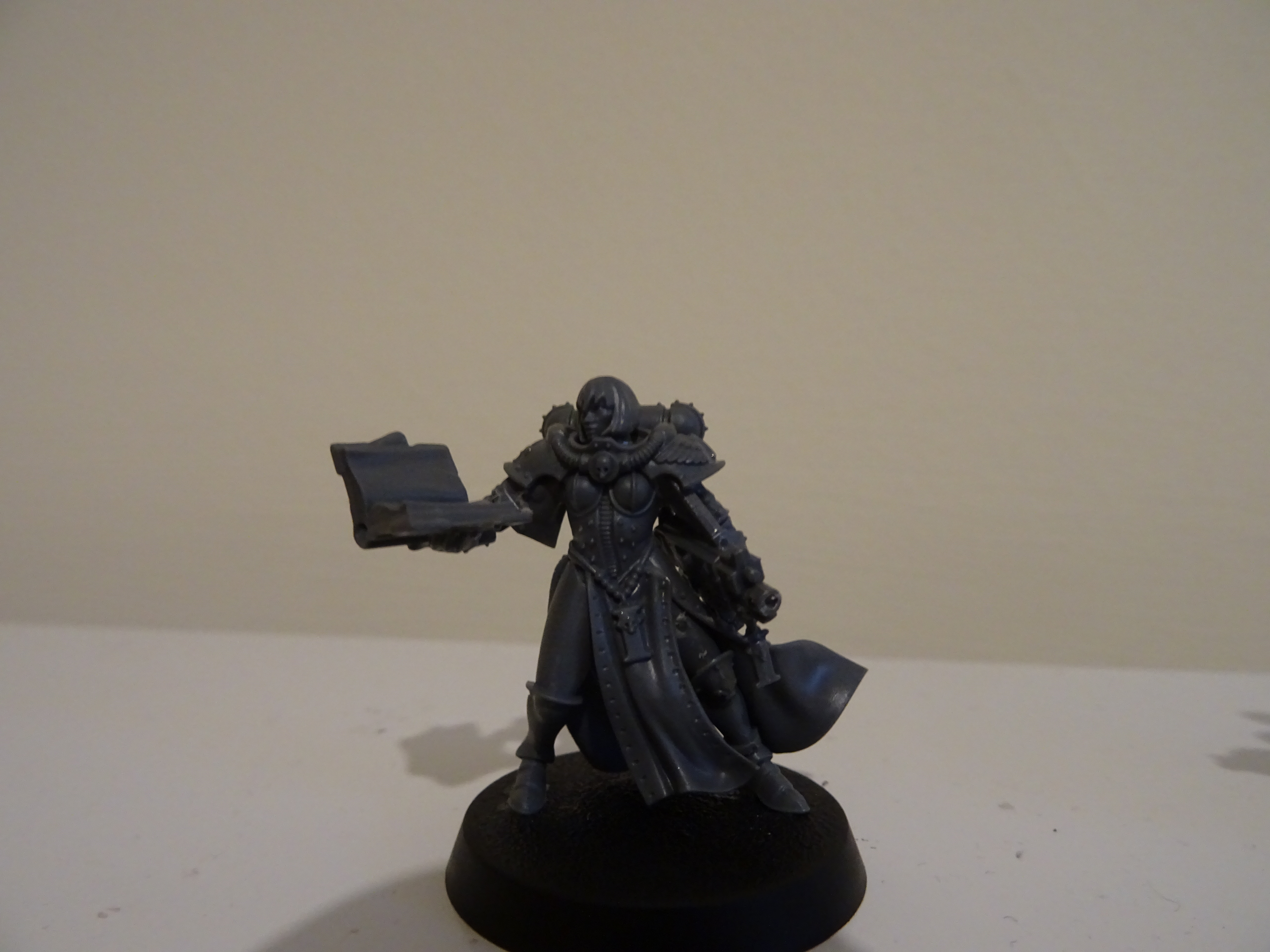 A rather blurry photo of the girls so far all together. 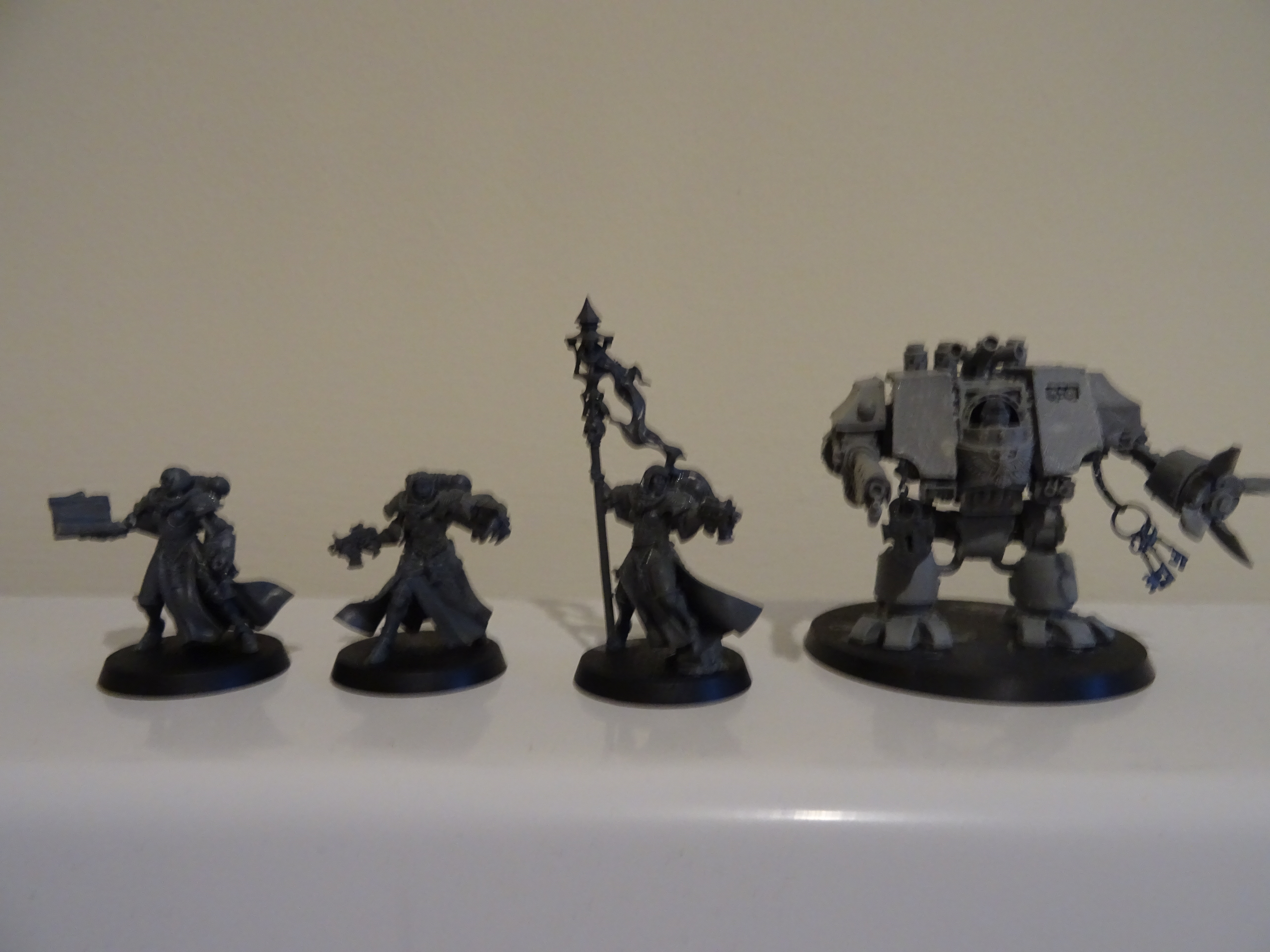 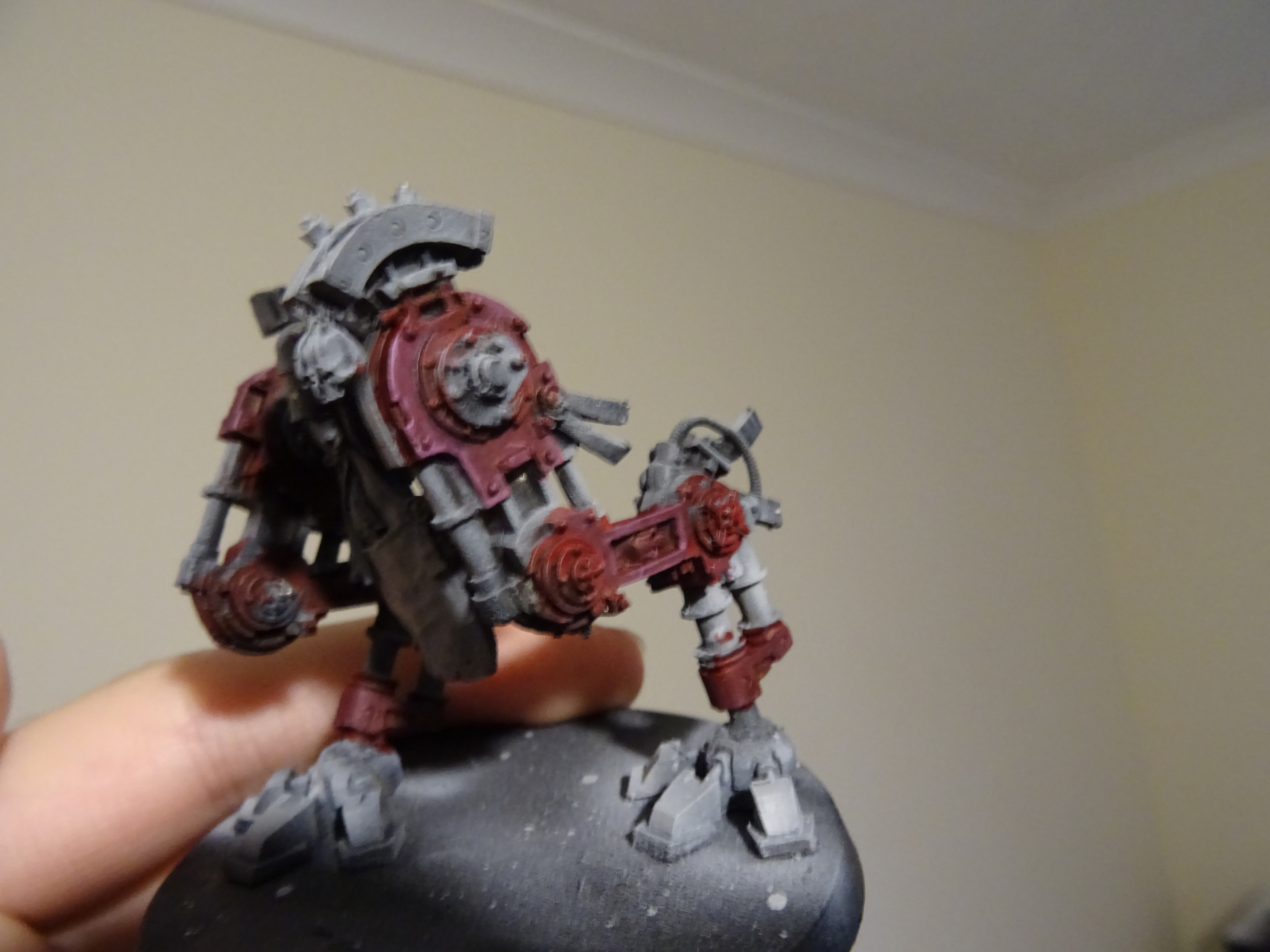 Got a bit of paint on Matilda. Was mostly me dossing about with my airbrush, using inks over a zenithal undercoat. I'm actually really quite chuffed with the off-white; it's not perfect but it fits the grimy, semi-Blanche/Middlehammer/oldschool Forge World paint effect I was going for pretty well. Needs some oil pin washes to the panel lines and the helmet mind you. 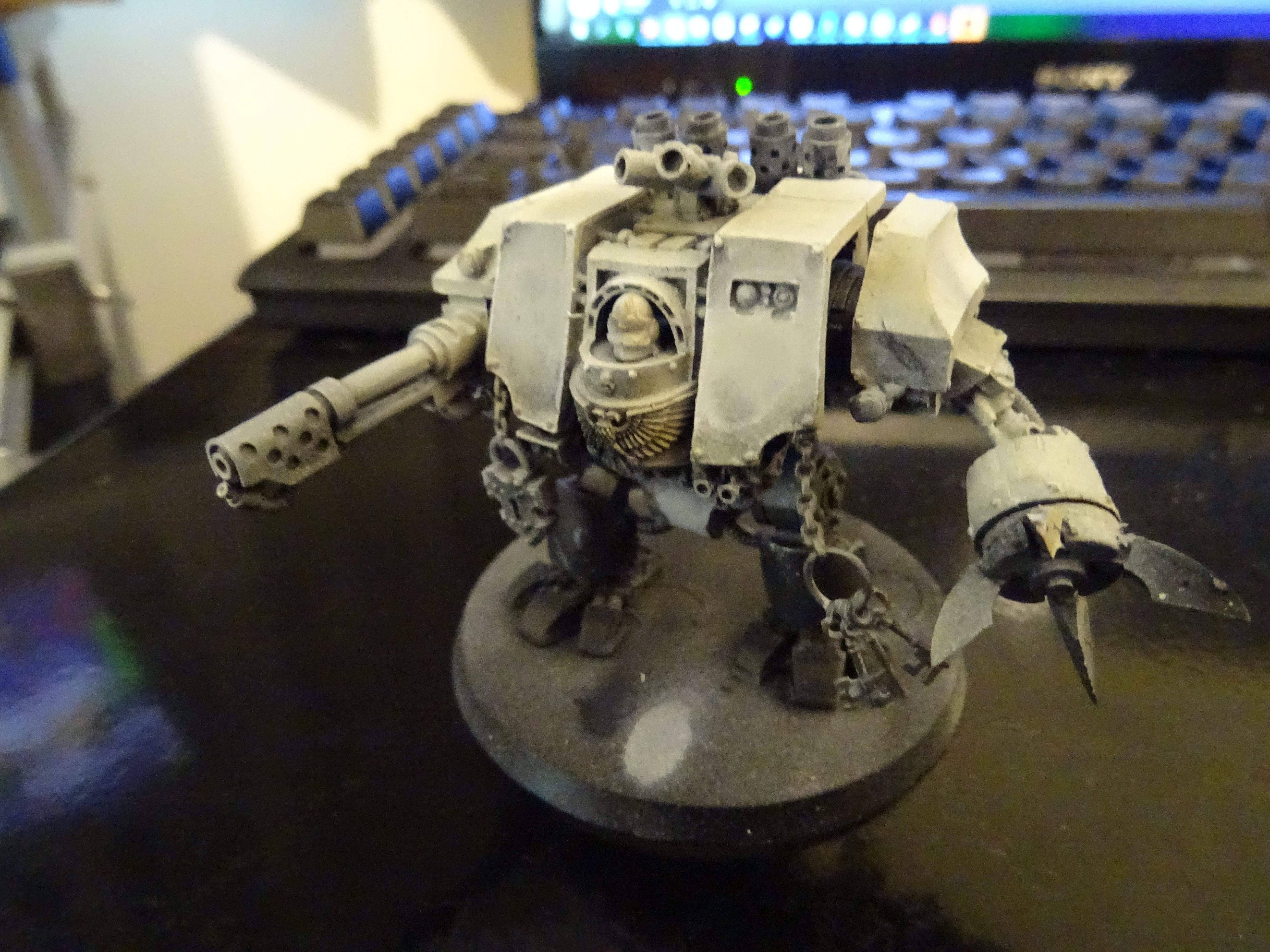 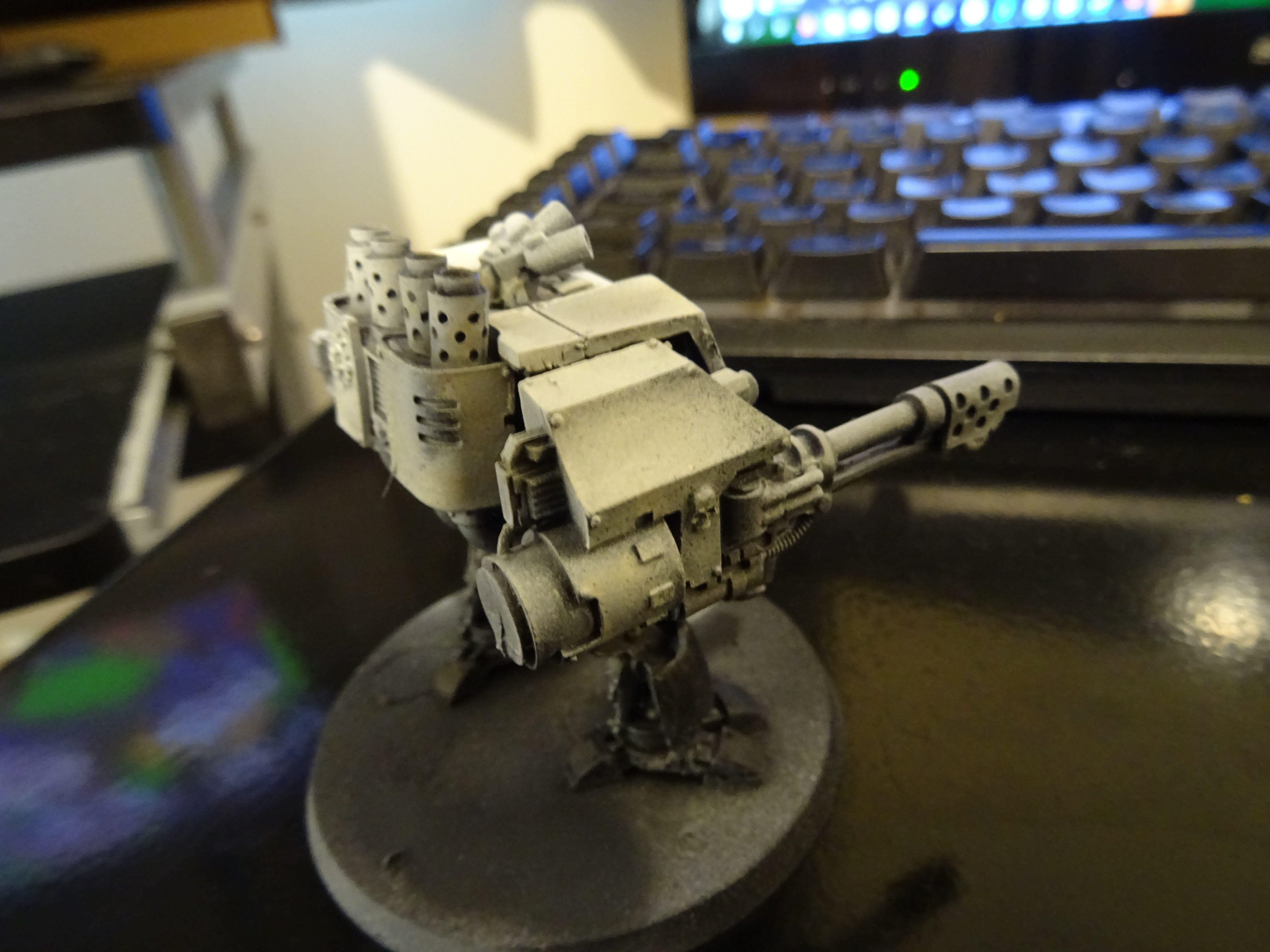 Enjoying the work you've done and the story behind it all. I particularly like how you have repurposed that nightmare lantern: I may do that too, its a great idea.

Also tagged with one or more of these keywords: kill team, inq28, sororitas