Are psychic powers worthwhile in Necromunda?

Over in the new Necromunda releases thread I read this quote recently. I very much agree that it is a cool sounding power. But is it actually any good?

Some interesting tidbits of information there, including a very cool psychic power for Delaque: 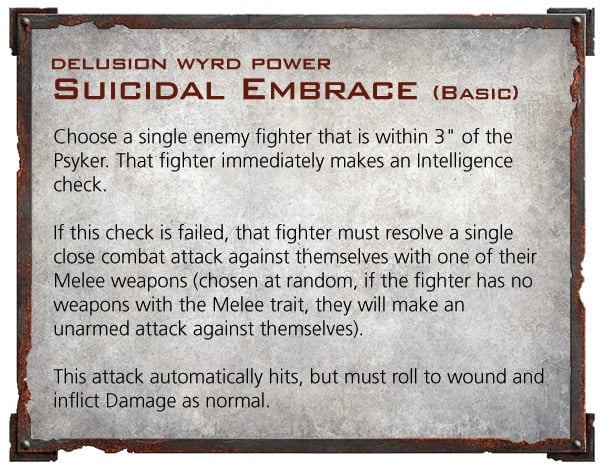 Look out House Goliath - Taking one's own (paired) Pulverizer to the face is going to hurt.

With the release of Book of Shadows soon we may be about to see a lot more psychic shenanigans in Necromunda. Delaque seem to be heavily leaning into psychics; both their prospects and new exotic beast have psychic powers, their brute (if it ever gets a model) is a psyker. It even sounds like their strong alliances will be psychic related; the stuff we've heard about House Ty says they use psychic nulls and I think the only Criminal Ally from House of Judgement that hasn't featured in a House of... book is Psi-Syndica.

Prior to this it's only really been a few hired guns and GSC or Chaos Helot gangs that had psykers. I've only ever seen someone use a GSC adept with psychic powers (Mind Control) and it just didn't seem particularly good, but my experience of psykers in Necromunda is limited.

Taking the above psychic power as an example, it just feels like the opportunity cost is too high. First you have to pass a willpower check to cast it, and be within 3" of the target (though the little wyrm things can help with the range issue). They then have to fail an intelligence check and only then do you get to roll to wound, damage etc. It feels like a lot of points of failure and the result (a single hit from a melee weapon) isn't even that great.

I'm not someone who's all about being competitive, but I still want stuff to be worthwhile rather than just frustrating because it rarely does anything. If something is high risk (e.g. with lots of points of failure) I'd like for it to be high reward too. I can't say I've ever looked at any psychic powers and felt like that's the case.

Does anyone have a different opinion on psychic powers? Anyone had some reasonable success using them? Anyone hoping to see anything in particular from the psychic shenanigans in House of Shadow?

It really depends on what powers you have available, some of them are complete trash and some are useful, simple as really.

I used a psychic leader a lot in the first iteration of the Genecult rules but immediately dropped him as soon as that was an option because his powers were crap and never did much compared to his trusty hand flamer.

I agree with both of your assessments.

I think psychic powers are the one weakness of Necromunda. There are too many hoops to jump through with no gain over using a ranged or close combat weapon...often they're just worse.

Overall I think psychic powers need a good overhaul....starting with how continuous powers work. I think continuous powers should need to take one test to activate and they stay 'on' until the psyker chooses a different type of psychic  power.

It's early days though and maybe the Delaque will have something that makes them worthwhile, we'll find out soon enough

It really depends on what powers you have available, some of them are complete trash and some are useful, simple as really.

I used a psychic leader a lot in the first iteration of the Genecult rules but immediately dropped him as soon as that was an option because his powers were crap and never did much compared to his trusty hand flamer.

OK... so which powers would you class as useful? Or good?

I'm not being facetious. I just genuinely don't remember if I've ever looked at a psychic power in Necromunda and thought anything more than "meh". But I've not really done the hard yards and analysed them in much detail or tried any out. I can imagine some having a niche use, but beyond that I always think they seem incredibly lacklustre.

It's interesting that your anecdote pretty much tracks with my thoughts... you gave them a go but eventually decided you were better off running your leader around shooting a gun.

I certainly don't think psychic powers should be anywhere near as potent and reliable as they can be in 40K. I'd quite like for them to have more risk and reward though. You might be able to shoot laser beams out your eyes like Superman, but after you do there's a real chance you collapse out of action or your head explodes.