Waaagh!, it ain't nothin' but a heartbreaker
The thought of waaagh! blows my mind
Waaaagh! has caused unrest
In the orky nations
‘Oo wants to die?

Waaagh!, huh, yeah
What is it good for?
Absolute krumpin!


Just starting up my waaagh! got the snagga box, and a few random gubbinz I’m orkyfying. It’s a bit different to marines and necrons - loving it! 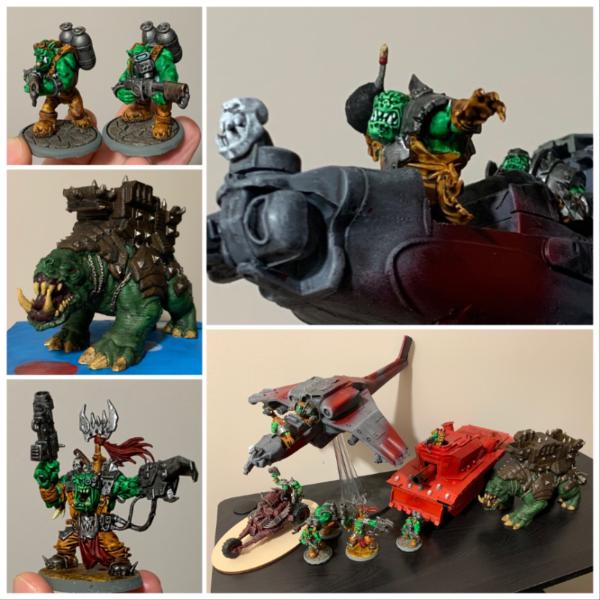 Also my first time really leaning into contrast paint… although I’ve decided that ‘Ork flesh’ is a bit too vibrant a green… going to use astra militarum camo for my snaggas and save Ork flesh for ‘regular’ orks (as I’ve already started with it).

Favorite, what? Of the buggies?

Because there's a general consensus that the Squigbuggy, Scrapjet, and Dragsta are all very solid units. The Squigbuggy does something Orks haven't had in a long time, and that is quality Out-of-Line-of-Sight shooting, and it does it at a very effective price point. Both the Scrapjet and Dragsta provide ranged anti-tank, with the Dragsta being more reliable and the Scrapjet having better potential. All three are also good in melee to finish off stuff.

The Boosta-Blasta and Snazzwagon aren't bad, but they lean into the anti-infantry strength our army already has. If you often find yourself playing against hordes of infantry, they'll be excellent, but typically they're just nothing exceptional. Not bad, at all, just not as uniquely good as those other three.

Personally, I'm planning on eventually getting 3 Squigbuggies and 2 Scrapjets/Dragstas for my competitive lists.

Thanks for the rundown on the buggies! Useful as there’s so much new stuff!

I’m tempted to try and konvert one for now and see if I like it!

Welcome to the Greentide. I've got several of those same old Mantic Marauder Raptors as old Rokkit buggies. The joy of orks is anything can be an ork vehicle if you believe Gork or possibily Mork enough. I also have one of each of the modern Orktober (so named for when they were released) and all of them can be fun. The Wartrike can be a beast of an HQ, the Dragsta and Scrapjet were the best in 8th. Squigbuggie looks like its going to be a blast this edition. The other two both much more useable this edition with the new ramshackle rule, and they can be good for clearing out light infantry, but then so can a squad of boyz. So they are fun but not as optimal as the others.

Where is that Squiggoth from? Its not the Forgeworld one, but looks really good. 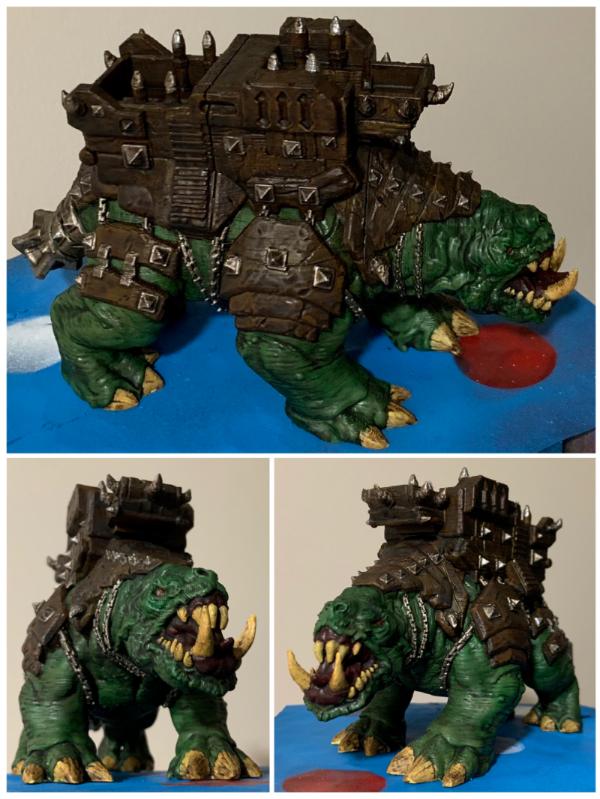 Figure I can chuck some burna boyz up there to keep up wiv da beast snagga boyz and give some ‘fire’ support!

Almost there with the first of the beast snaggas! 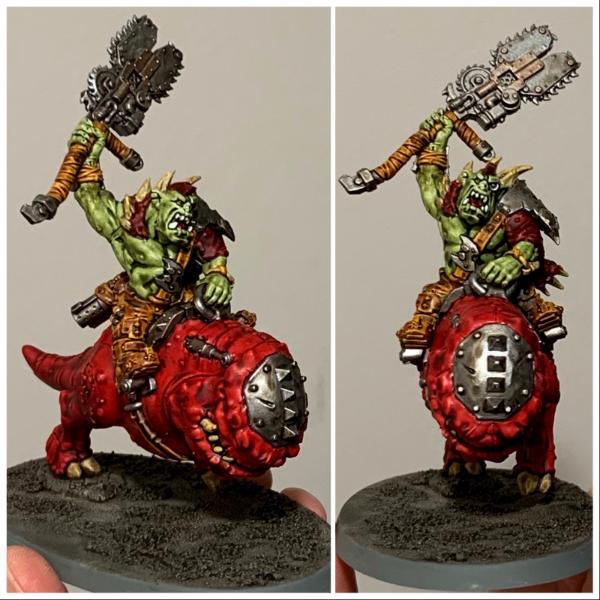 Realized how great the hunta rig and killa rig are, and how the squiggoth is lackluster.. so thinking about building up a superstructure (will have to add a tower).

I assume it will be knight size base ? 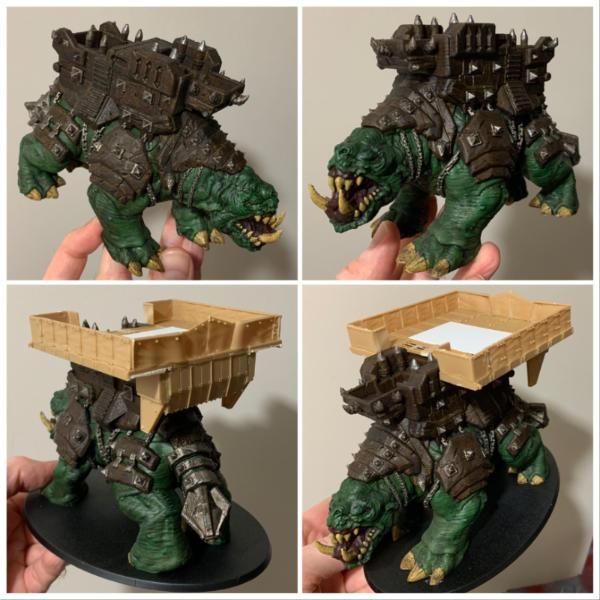 Yeah, I think best guess at this point is that Killrig will likley be Knight sized base and Knight sized price. Throw some gunz on that platform, and a tower like you mention, and that would be a nice proxy model. Looking at all the rules for it, the rig is going to be a friggen beast.

Ok, playing with the tower and weapons… think the tower needs to be slightly higher (easily done). Sticka rokkit done. Need to figure out da big lobba… got a couple of ideas! (And then crew). (Using warboss in tower as place holder for wurrboy) 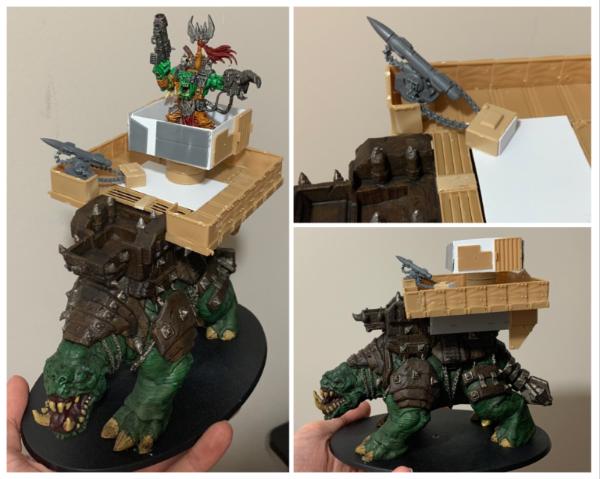 Oh, and adding totems/poles. Gotta have some boss poles! 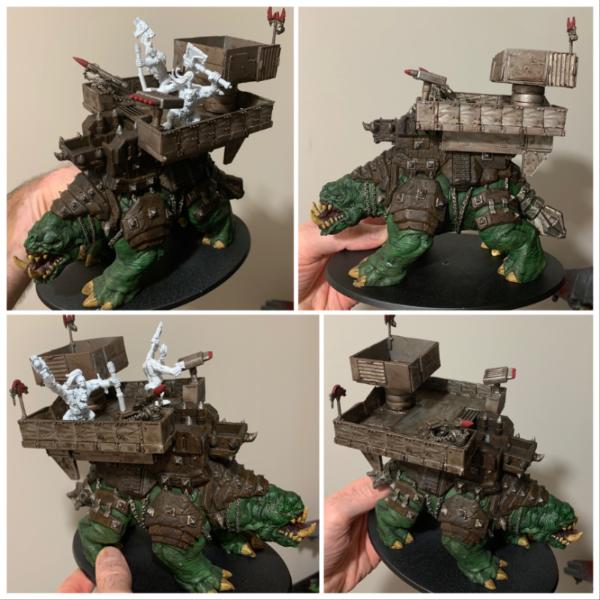 I had the old Deathskulls buggy list, 3 Skrapjets, 3 Dragstas, 3 KBBs and now im collecting 3 Squigg Buggies. They are such cool models and so nice to paint.

In the new addition the standouts clearly are Squigg Buggies and Skrapjets.

SB's get that out of LOS shooting and in freebooters in the right conditions will be shooting on 3s, with snakebites they will be damn resilient, in deathskulls you get that re roll and fnp to mortals. Cant see them in Badmoons for the range boost but blood axes for the extra cover save is nice.

Skrapjets are great, working in a team of 3 on the charge using ramming speed doing 3D3MW on a 4+ each and then the 3D3MW on a 2+. Thats after they alldo 3D3 Rocket shots and 7/10 dakka shots each. That much dakka in freebooters is nice, hitting on 3s and 4s,

The boom dakka snaz wagon has access to KJ and makes it uber shooter, and on the waagh gets even more dakka shots.

The Dragsta used to be great when it auto advanced and you could give a unit of 3 the KJ to ignore the mortals but now its lost that i would just use them without advancing and in freebooters could be shooting the big gun on a 2! Thats nice. They go 14" so any need to advance? Maybe not but its still there as a jumping into back lines snipe a char and charge in at some point.

The KBB did ok in the new addition, although it kept the 8" range on its flamer exhausts when all the other 9th edition flamers went to 12" Its also great with ramming speed due to the spiked ram and when it gets close those 4D6 flamers will munch through cheap screens of pox walkers or guardsmen. 3 x 4D6 Average 36 Auto hits.

Cant wait to start getting into this new buggy heaven.

Almost there on the kill rig! 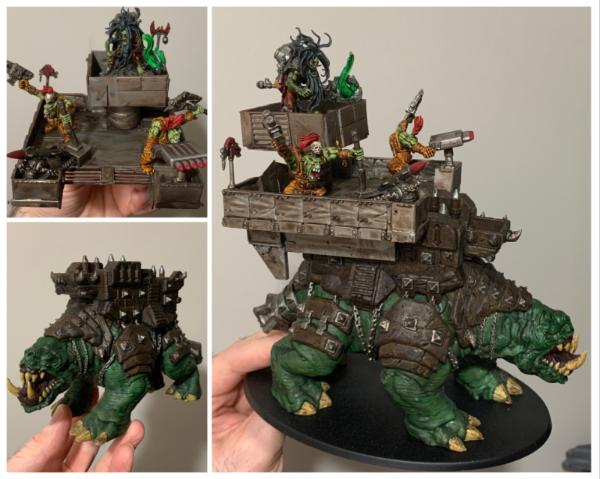 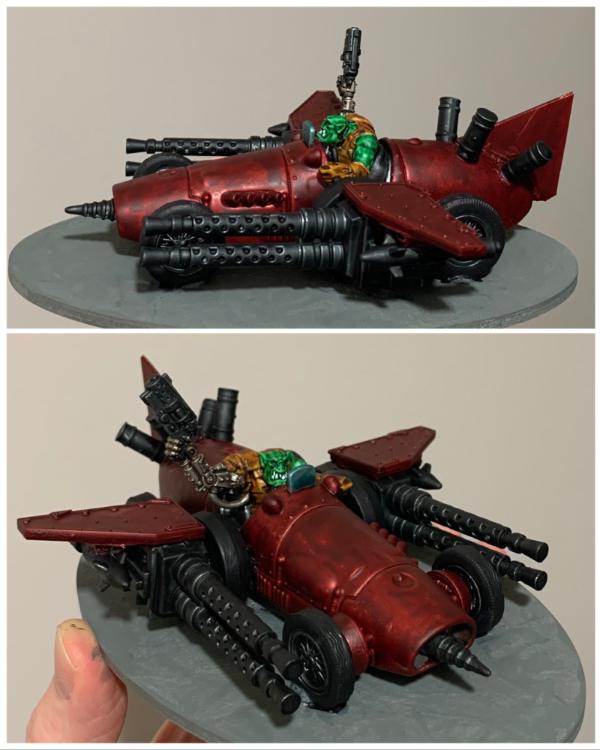 Probably needs some transfers or go faster stripes to set it off. Almost there though! 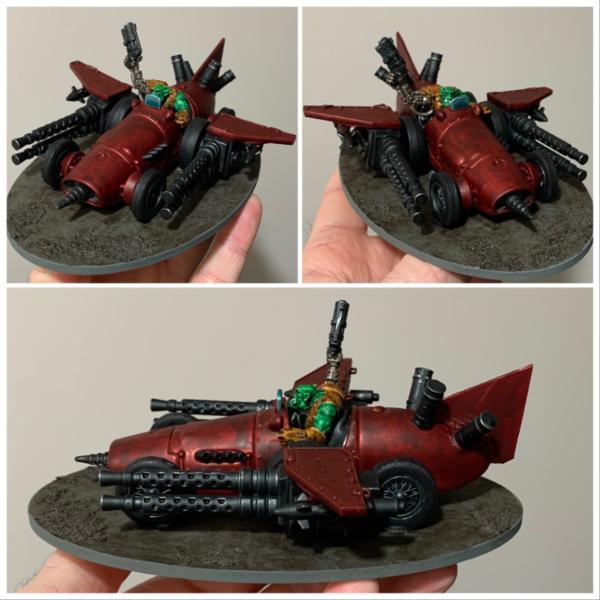 i can almost see it racing around Monte Carlo... thet definitely needs a racing stripe Now!!

well done on all your stuff and welcome to Green 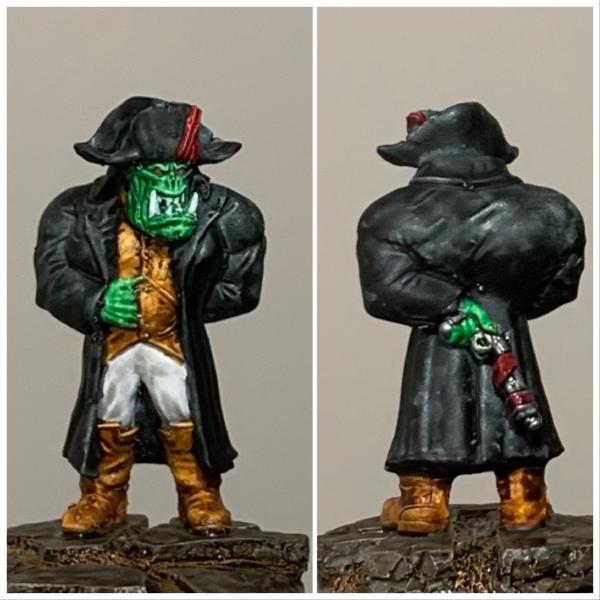 That’s fantastic. Or should I say, orksome? Haha

That’s fantastic. Or should I say, orksome? Haha

The word you're looking for is... waaaghsome

Something lighter… the dOrk side beckons: 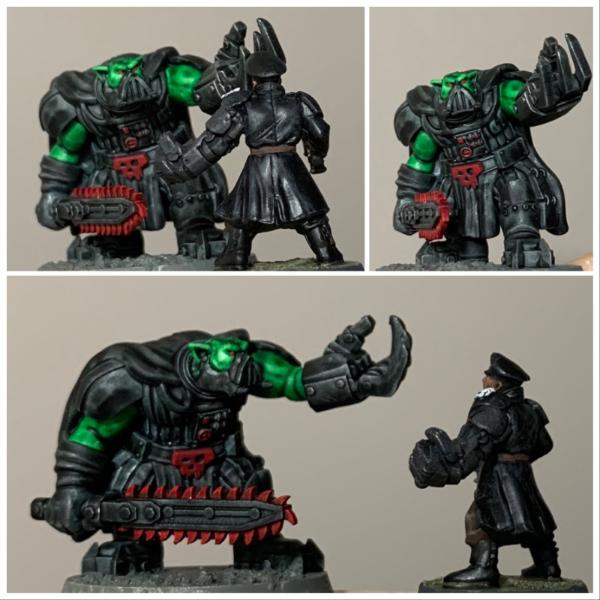 “No yarrick, I am your father!”

Almost ready with the kommandos - the shiv lord leads his team! 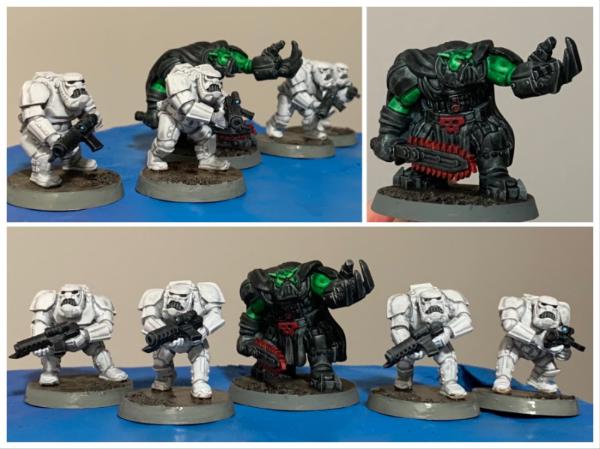 where the heck are those sculpts from ???...


Found them on Etsy: “ Siff Lord Ork and Troopa Entourage”