Had a game with a friend who doesn't enjoy the basic matched system of 9th, so we whipped up a little narrative blast instead. Glacer's Creek, aka Rorke's Drift from the19th century Zulu wars, is a delightful classic and seemed a good fit for the amount of miniatures we had at hand.

The core of the scenario is simple: 1000 points of defenders sit in a hastily fortified location, in this case a remote bio-research facility, trying to survive 3-5 waves of varying enemies coming to get them. If half of the attacking models die, a wave ends. Defender's casualties are rolled for between the rounds, they can either die, return to the ranks with a band-aid or get put in a makeshift hospital to see if they can be patched up later. Should there be any defenders left at the end of the final wave, they win.

With that in mind, let us set the scene!

The Battle for the Bio-Labs

At the distant backwaters of the galaxy, there exists a diminutive, discreet shadow empire ruled by their post-human Astartes overlords. Calling themselves the Echoes of Eisenstein, these marines consider themselves the true heirs of the XIV Legiones Astartes, the Unbroken Blades who never fell to the fell embrace of the Plaguefather. Though loyal to the cause of humanity, the millenia have not been kind and by the 41st millenium, their lot is that of open secession in all but name as far as the Imperium is concerned. Dour and stoic as ever before, the Death Guard however take this in stride and carry on with their clandestine wars. Bitter is the hate festering in them, seeing how the rotting Imperium they were made to protect slowly crumbles into further insanity and self-destruction as it ever pushes them further away, but for which they must still take up their arms and die if there should ever be a better tomorrow. Their bloated, fallen kin in the darkness of the Eye stand as an unforgivable example of what awaits, should they ever again become so lofty as to think nothing of the little people sheltering behind their might. Even if there is no hope, only slow decay and eventual collapse of it all, there is no despair and struggle, no such humiliation by the words of their erstwhile allies, that they won't endure to keep the unthinkable dream alive. The futility of it all is grimly amusing for their warriors, almost a point of pride even.

In one of their many secret holdings, Captain-Commander Erasmus and his terminator guard have come to meet the apothecary doctor running an important gene-engineering project. Situation around the planet has become increasingly dire with alien lifeforms making planetfall, requiring immediate bolstering of existing facilities. Abruptly, the radars start screaming. There is no time, the xenos are already here.

Barrels and crates are thrown to makeshift barricades as men scramble to firing positions. 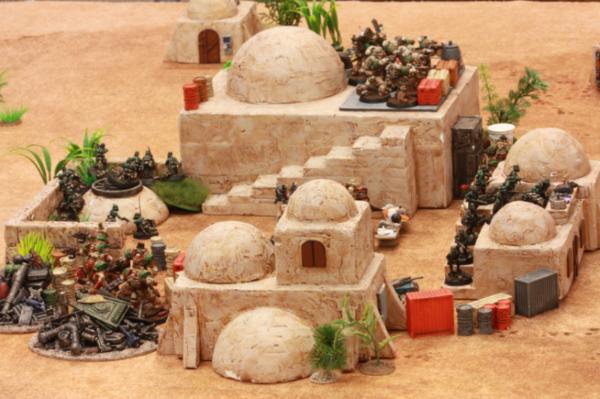 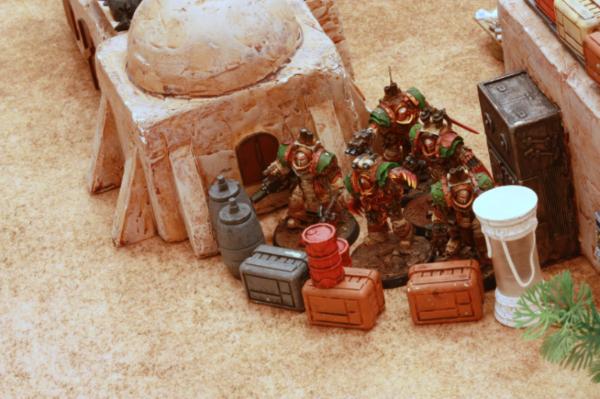 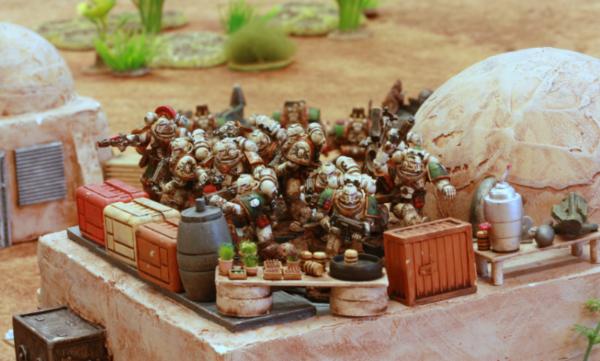 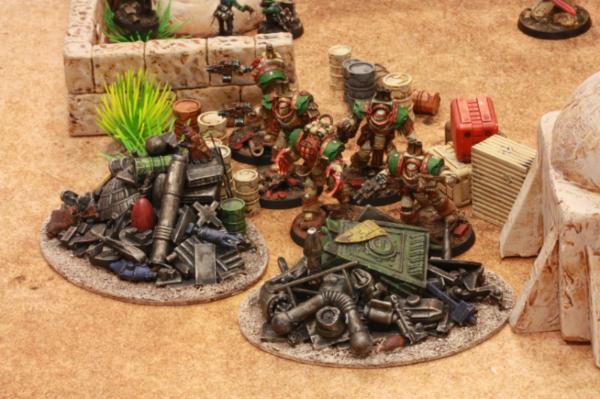 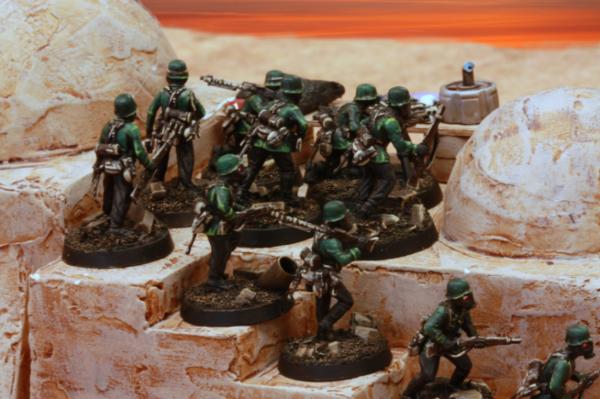 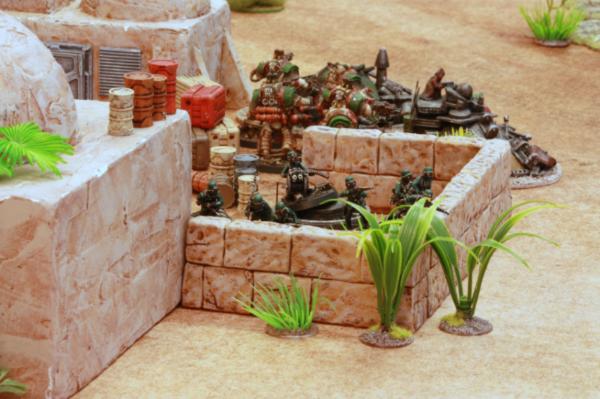 "Prepare the labs! I will stop them here!" Erasmus growls. 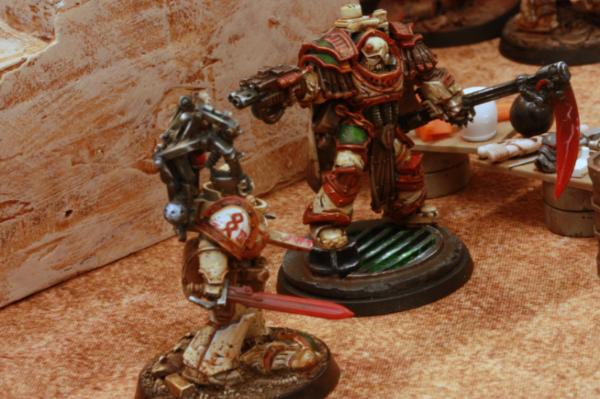 Meanwhile, in the falling dusk, the alien monsters creep closer...

The first, exploratory wave is quickly cut down in a storm of bolter fire. Though the xenos are pushed back, a rampaging carnifex manages to down one of the terminators and couple of lesser men. 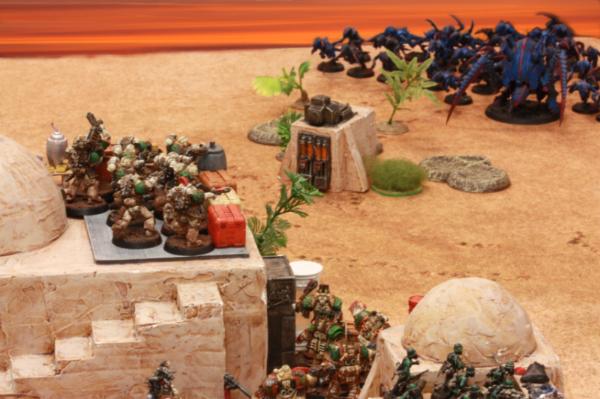 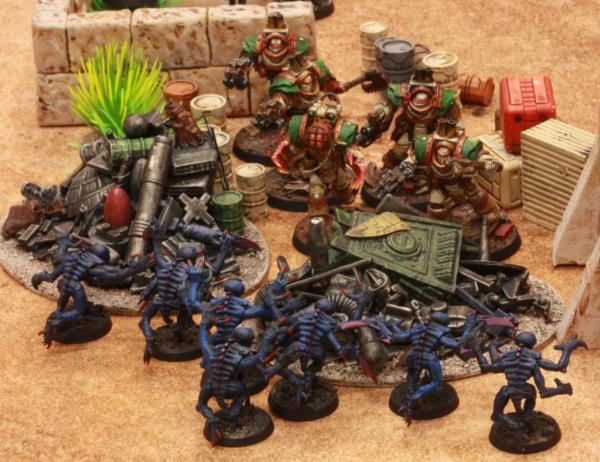 The second wave takes a suicidal charge from one of the terminator teams sallying out of the facility to break, but is likewise thrown back in tatters in short order. 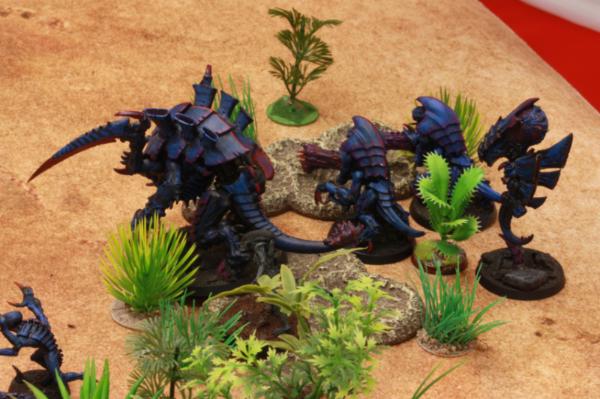 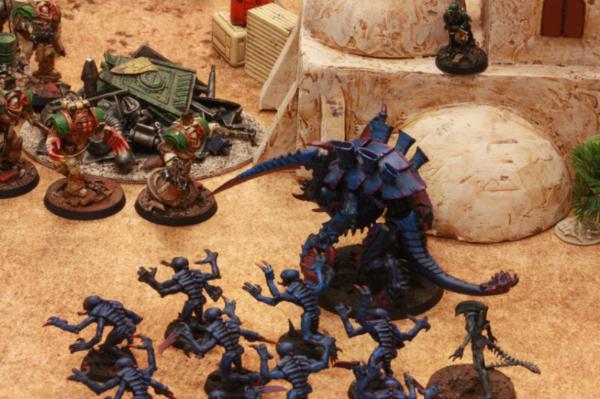 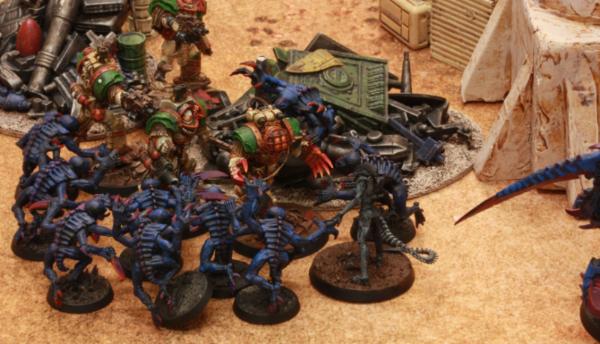 While the Doc manages to patch some of the terminator brethren back on their feet, the approaching third wave thunders closer with much more force. Hulking monsters and massed smaller nightmares scitter on the dunes and charge forwards from the darkness. 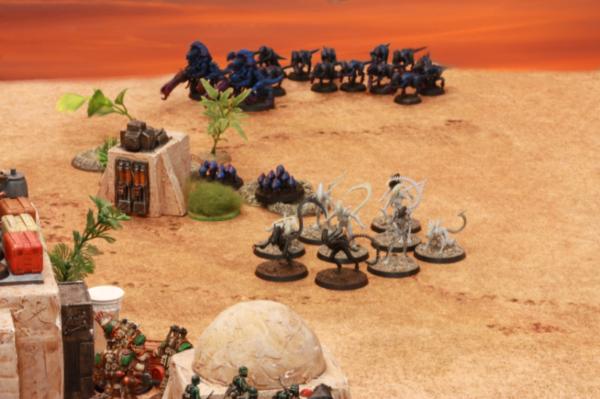 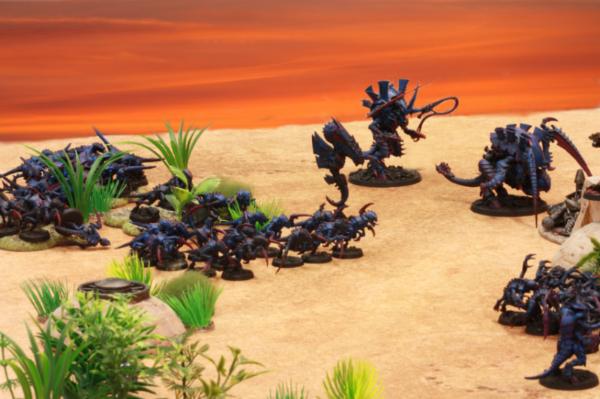 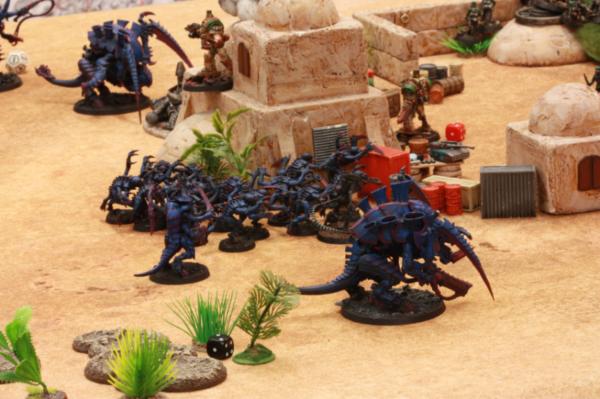 As fighting heats up on the trash heap side, at the other side the second terminator squad sallies forwards under covering fire from the rooftops to take the fight to the enemy, crushing raveners, rippers, gants and the heavier fire support beasts as they charge over. 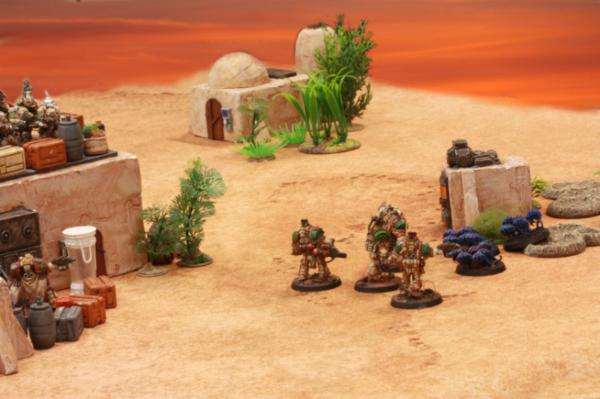 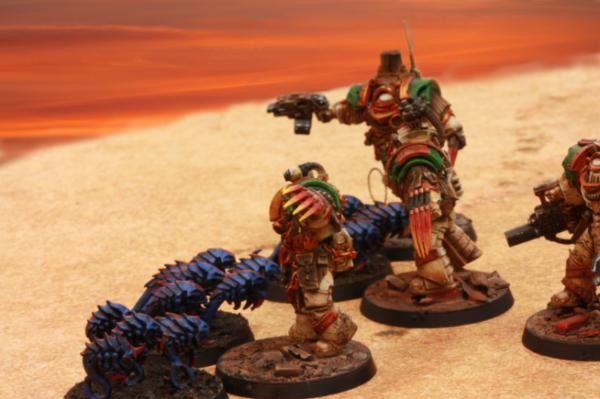 While that side gets taken care of, the central square is overran. The few terminators there cannot hold against the psionic might of the leader beasts and get mopped up by 'stealers in rapid succession. The auxiliaries don't fare much better and are unceremoniously cut down. 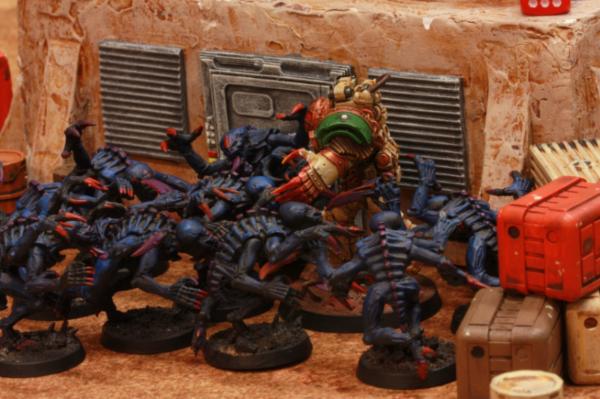 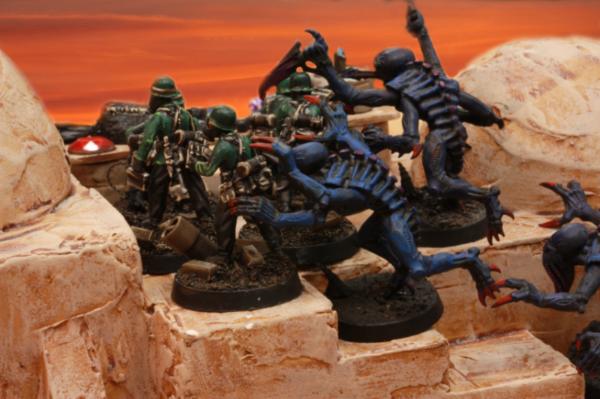 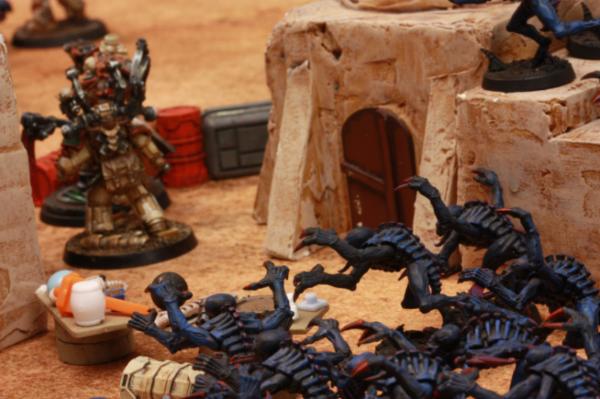 The situation looks bad for a moment, but Erasmus strikes the scene like a thunderbolt. His scythe blazing and sizzling with burning alien ichor, the captain of the Death Guard reaps a terrible tally through the assailants. 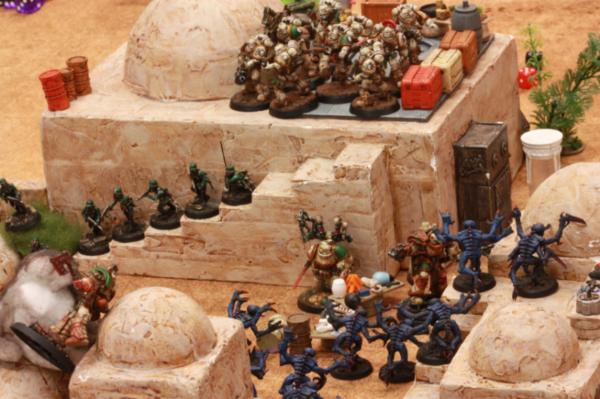 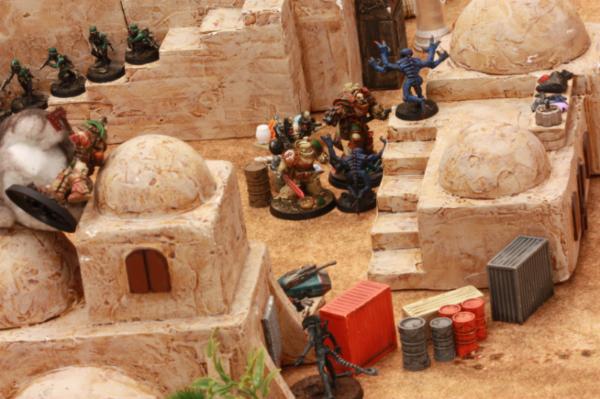 Seeing how blunted their attack is, the more intelligent among the xenos decide to scurry off, shielded by the remaining swarm of unimportant monsters. Though their back is broken and no further attacks will come, there is a momentary shock as Doc gets trampled into the dust by another carnifex before being blasted in the face by the captain's meltagun. By a whim of the fates, he does however survive the encounter with mere broken bones, cushioned as he was by the soft sand and thus no knowledge is lost.

Victory for the defending Death Guard, with plenty of marines still left standing at the end! Three auxiliaries managed to make it out alive as well, beyond anyone's expectations

The scenario is a blast to play and I encourage everyone to give it a shot, though this matchup might not have been the best if mounting casualties and desperation is sought. The Death Guard are hard as nails and an absolute nightmare to remove from entrenched positions, while Tyranids have plenty of weak bodies and their shooting is somewhat lackluster, meaning they have a hard time closing in for the kill before the waves end. The final wave had 88 'nid bodies on the field! Broodlords are quite devastating in this setup, though.

Thanks for reading, happy wargaming.

Also tagged with one or more of these keywords: narrative, death guard, tyranids, siege, glacers creek