My army, for what it's worth.

This is the new army.  Mostly.  You can see the older Rhino in the rear center but that will soon be replaced with the one from the patrol boxed set seen in the background.  I was not going to place it in the army at first but I will need it on the 18th for a local tourney.

My old metal sisters are sitting on a shelf now.  Those that are painted at least.  I started repainting the army yet again shortly before the plastic sisters were really announced.  Anyway.  This is what I have so far. 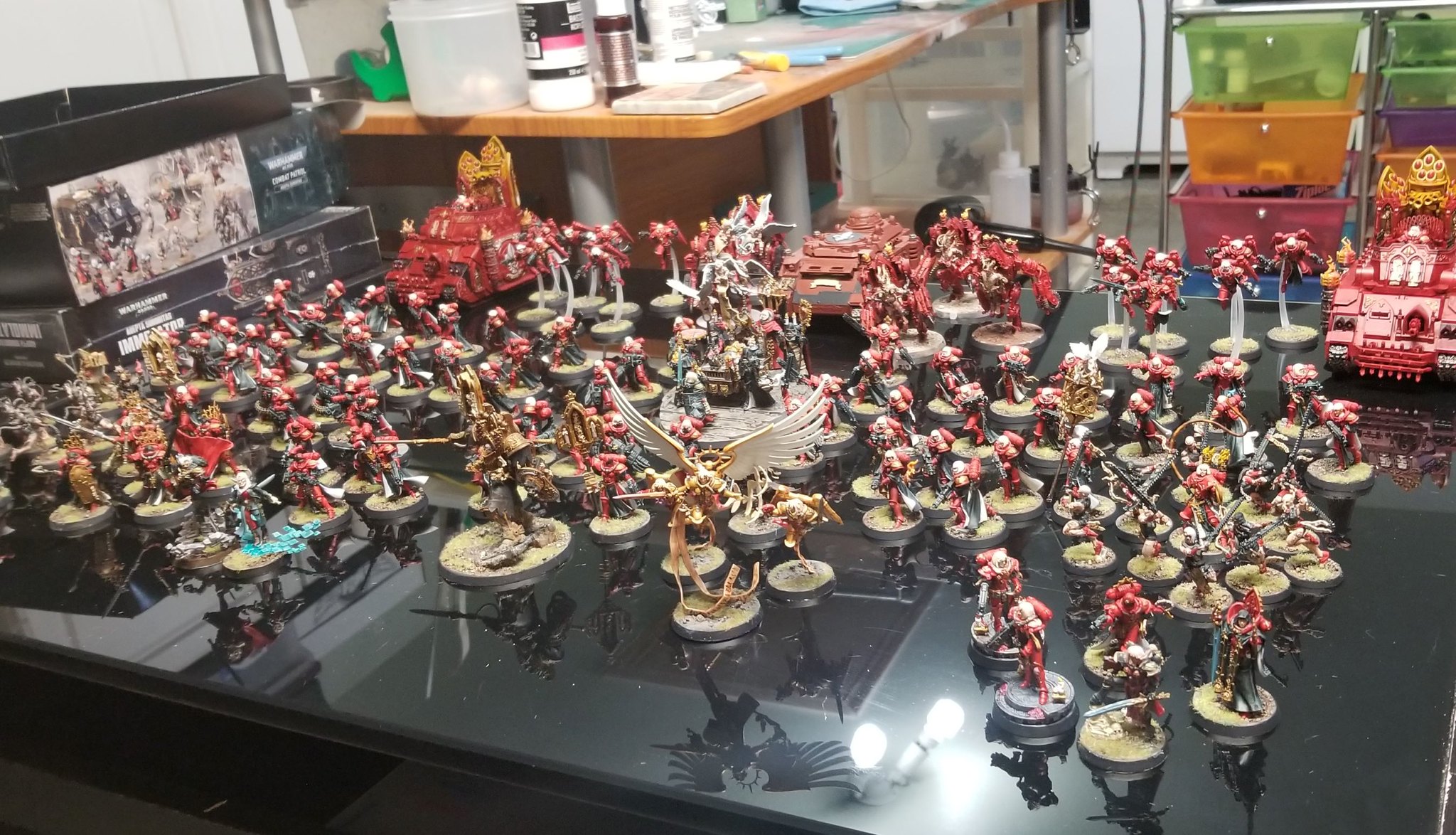 I am no where near the painter that many of you are.  I'm an old man with cateracts and hand tremors.  I still know better than to say "if I can do it, anyone can" because let's face it.  Stevie Wonder is never going to paint like this.  We all have our limits and our talents.

I love your army. It is very nice and the colors look great. As for the painting side of things, i understand completely but the thing is as long as you enjoy painting them thats all that counts. I tattooed for almost 24 years and now i have hand and eye problems. I cant do the detail i used to but i enjoy myself until my hands say quit. Also the majority of my tanks are old, just cant afford the new ones. I have one new immolator but my 3 exorcists are conversions i created the way i think they should look as well as my other 2 immos and 1 rhino so dont worry about that. Keep up the good work and enjoy the game, after all thats why we got into this hobby. Post up reports and let us know how you do.

You've got absolutely nothing to be worried about - this is a gorgeous collection that will look fantastic on the tabletop, and that's what matters.

"All I wish to hear from your imperfect world is the silence of its dead."

Looks great and will look amazing on the table.

I think your army looks great. GW and content creators have given us unfair standards to judge ourselves against. Your army is going to look better than alot of the armies you face.

My newest piece.  A Canoness with bolt pistol and chainsword.  Easy arm swaps for the weapons but I warped and tore the cloak a little carving away the plasma pistol.  Anyway, this is my new bog standard Canoness now rather than having to use a superior model. 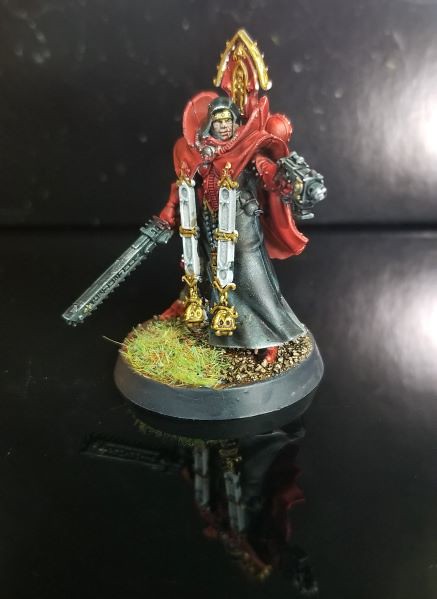 i think it's outstanding!

Sweet! Very nice work on her. The conversion is flawless but i have to ask, why a bolt pistol? Chainsword? For using the rod of office maybe? Anyhow she looks perfect.

i have to ask, why a bolt pistol? Chainsword?

For a dirt cheap beat stick.  The chainsword is required for the Bloody Rose Relic Beneficence which is S+2, AP-2, D1 and +3 attacks.  I have another Canoness with the standard loadout of rod, powersword and plasma pistol so I wanted to use this spare model for the slimmed down version.

I got a game in today but we only played 3 turns before I had to leave.  My opponent, who was playing 1ksons, was ahead by 3 points at that time.  I took To The Last as a secondary objective but I was about to loose Moreen Vahl with only 2 wounds left and a good 12" separating her from the Sacrosants.

The 5+ auto deny was a life saver.  Of course playing against thousand sons I had plenty of opportunities to deny.  He could still cast more psychic powers than I had units in range to deny with.

Moreen and 2 mortifiers took on a terminator squad in melee and put them down.  Was a nice victory.  My opponent wasn't designed for melee so in the first two turns of shooting he reall put the hurt on my infantry.  To the tune of 2 BSS, my Dominions, Rets and Repentia.  Shot to hell and 3 girls lost to running for the hills.

I had a unit of 5 arcos that charged his Defiler.  He had not really worried about the slogging across the board until I started rolling attacks.  It took two turns of fighting but the arco's took him down to a single wound.  Celestine finished it of for the kill.  Unfortunately, of the 5 arcos, 3 were lost to rolling 6's after using the trigger word.  They did well and being a cheap, small, non-obsec unit they were not seen as a threat until it was too late.  I think they are useful like that.  Just run them across the board with the forward troops; if they do get shot up first it is just taking fire off my special weapons.

The game ended before just Celestine could get into it with a unit of Rubrics.  She was in a good spot.  Stern, however, was piddeling around in my back field and not really in a position to do much damage.  She used her "smite" once and never got near close combat.  My fault for where I placed her coming in on turn 2.  I would have been better off just placing her on the table at the start of the game.

As mentioned earlier, my Sacrosants never made it into combat.  They are slower than Morveen and when she made her charge, the sacrosants were left far behind.

I didn't take notes and it was not a full game so it's not much of a battle report, but there we are. I called it a minor loss but my opponent didn't think that would be the case once all my melee units really got into play but I don't think I could have made up the points difference regardless.

sounds like a fun game. Your army looks nice, it"s always very welcome to see an entirely painted army on display. I love shots like that.