13 replies to this topic

A fledgeling crusade page from a longtime Templar modeler who’s decided to finally start putting together a thematic army with some light personal fluff.

Welcome to the Eternal Crusade, brother! I will look forward to coming posts!

No pity, No remorse, No fear!

In 2012 I walked into a hobby shop after deciding I wanted to revisit a favorite childhood hobby: model building. Seeing the 40K shelf it reminded me of another favorite hobby when I was a kid: war games. I was clueless about what edition it was, what meta gaming meant, and how the game was played. after some browsing and reading decided on the most aesthetically pleasing SM chapter: the Black Templars. Everything looked like a Motörhead album cover, and I was hooked. After weeks painting up a small force of marines and meeting some local gamers to actually play I realized: I had chosen an outdated force that had no real role in the new edition of a game that the more I played the less I liked. I was disappointed, but I continued to build and fiddle with Templar themed marine models while shifting my focus to other games. For years I daydreamed of a revised Templar codex. Of new models. Then the rumors of new true scale marines I had suspected were coming proved true. Again, I was disappointed that mostly these weren’t in the BT wheelhouse, but they were neat and I was happy to have cool new models to build. I was convinced I would never see a new BT kit: the motif wasn't copywrite friendly, the major chapters dominated everything and each edition marines got a little less grim and a little more smurfy. But with the release of Sisters of Battle in plastic, something I had been told would never happen, I found renewed hope. And now, after months of rumors and rumors of rumors: it has arrived. Years of walking in darkness with only my faith in some designer in Nottingham and the light of the Emperor to guide me, I am delivered. The new models have lit a fire under me to dive back into Templars with the zeal and fury they deserve. I’ve decided to start this thread to post updates on my army and show off some of my work. Nothing spectacular, but this is a hobby that is helped by positive attention and feedback.

-"In the grim darkness of my basement, there is only half finished projects."

I figured my crusade needs a fancy ride to get to and from the fray, so I picked up this tool box and spent the evening magnetizing my little primaris force. Very satisfying, and while the toolbox isn’t super cheap, it’s way more affordable than the magnetized transport bags you can buy. Cool trim and paint apps to follow. 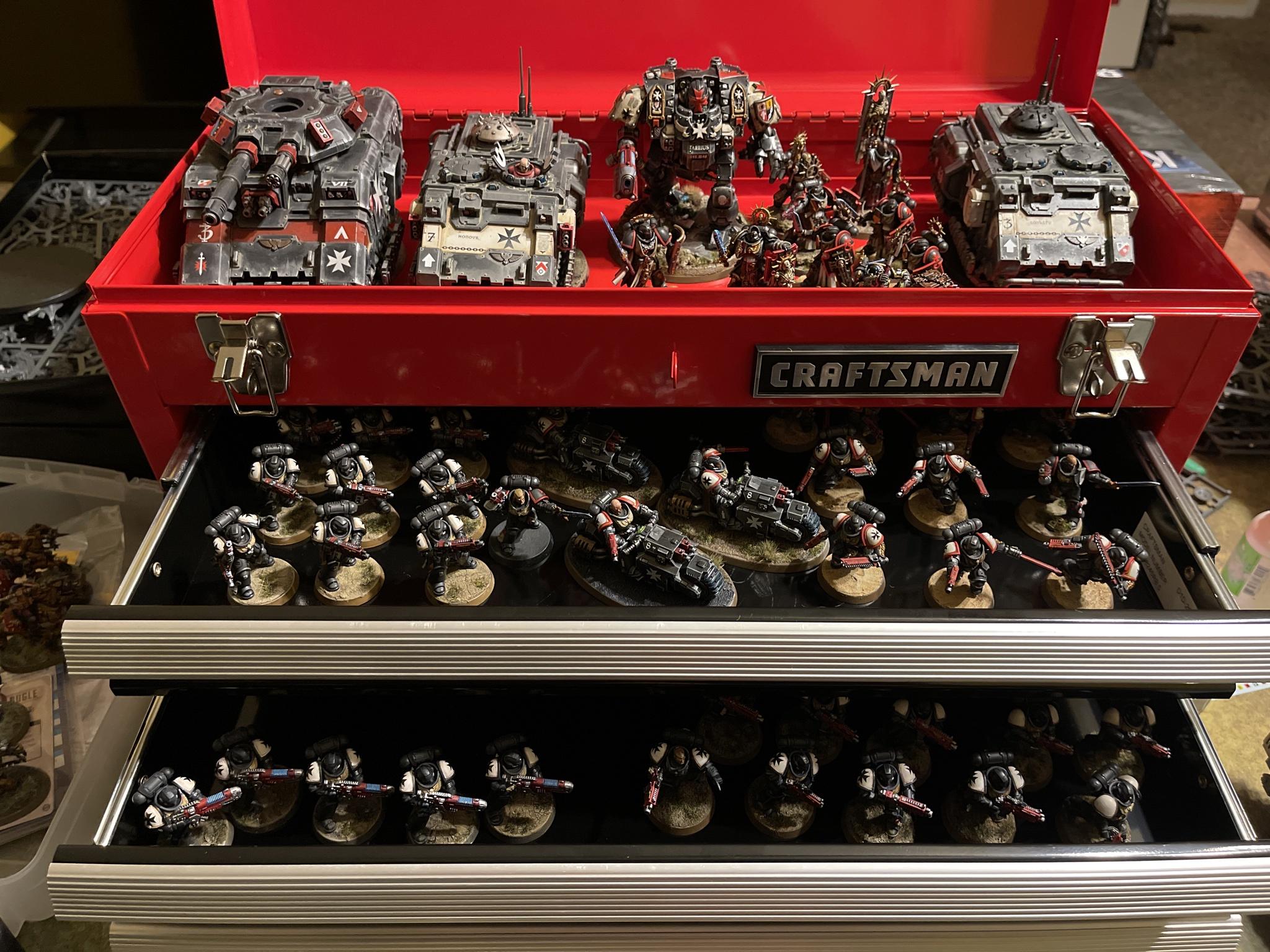 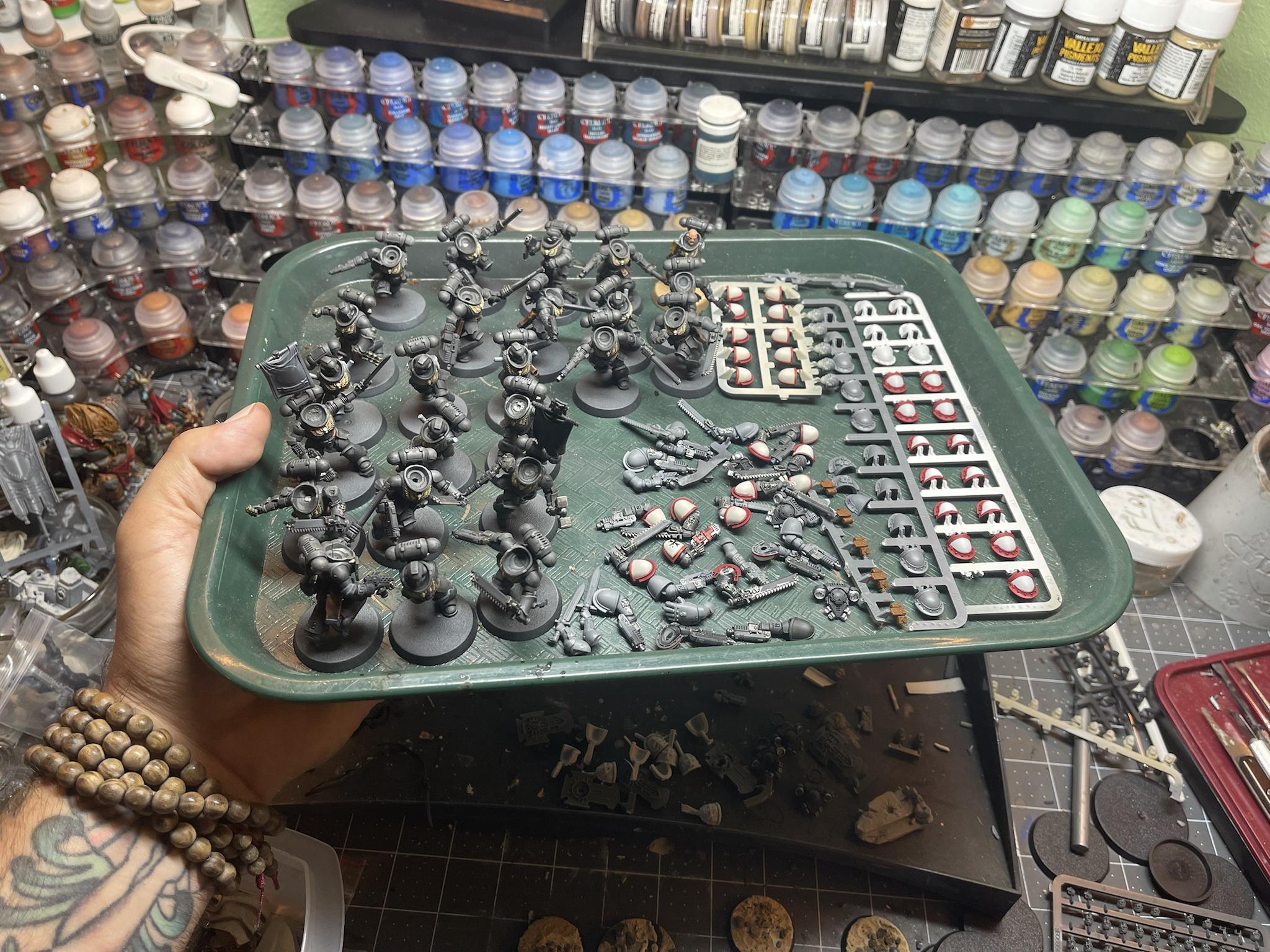 Those are some nice new Templars coming!

Decals time for the assault squads 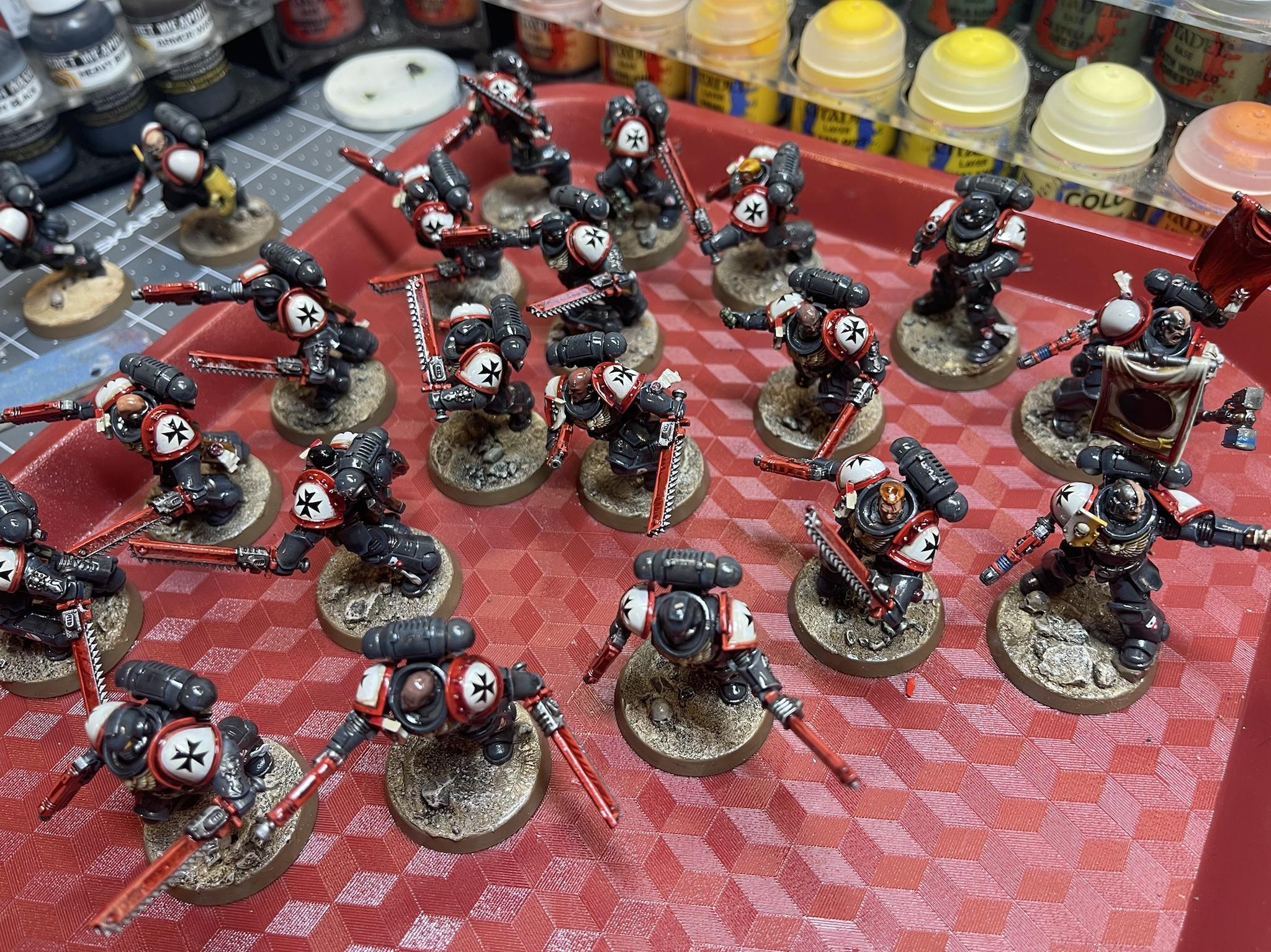 Thanks! Can’t wait to finish the details and get them flat coated

It looks like you are using firstborn mkiii shoulders on your primaris models.

Are the mkiii shoulders And primaris shoulders identical in size?

+++Keep Calm, and uphold the Edicts of Nikaea+++

+++Black Templars bringing Compliance to a sector near YOU. Some terms may apply. The Eternal Crusade may prove hazardous to the health of heretics, mutants, traitors and Xenos. Ill effects include but are not limited to execution, burning at the stake, getting blown to bits, battered into bloody pulp and in rare cases exterminatus. Contact your local Chapter Keep for details+++

Shoulders and heads are totally compatible, I wanted a little throwback look for the veteran squad

"All I wish to hear from your imperfect world is the silence of its dead."

Back to + BLACK TEMPLARS +

Also tagged with one or more of these keywords: Modeling, Painting, Black Templar