Ah, the Kroot. Poor, neglected porcupine-vulture-people. GW hasn't given them a whole lot of love, with almost half their entire lineup now gone due to FW retiring the old Knarlocs.

But enough bellyaching. There's a surprising amount of people trying to show the Kroot the TLC that GW hasn't given them, most notably Modern Synthesist and his planned counts-as-Drukhari Kroot force "The Undevoured" (TLDR: They're Tyranid hunters!). And whilst I probably can't justify starting ANOTHER project, I do find the Kroot oddly fascinating. However, whilst they're best known for their beasts of burden and superevolutionary abilities, I always wondered what Kroot vehicles would look like. We know they have some technology- they make their own weapons, and the Warsphere is one of the more memorable BFG ships due to its striking appearance, so I don't find it impossible to believe that they'd make use of some forms of indigenous-designed vehicles.

I always thought they'd look quite alien, and fairly "scrappy" but not in an Ork "made of random junk thrown together" way- a T-34 to the Orks' Bob Semple Tanks. Think of the Brutes from Halo and their vehicles...all two of them. Rather, they'd be very functional and basic in design, quite jagged and angular, with a focus on ease of manufacture/repair over high-tech shenanigans. Most notably, they'd mostly be skimmers but would be powered by turbine jet engines rather than complex anti-grav or fusion reactors or whatever. I also figured that to go with the Tau having vehicles named after sea life, theirs would be named after reptiles. So for example:

>"Snapping Turtle" armoured transport (essentially a Kroot land raider, albeit somewhat more expendable, a bit faster and more focused on being a mobile pillbox rather than a battle tank that can also act as a transport)

Finally, here's a slightly crap doodle I did of a theoretical design for the Mamba. 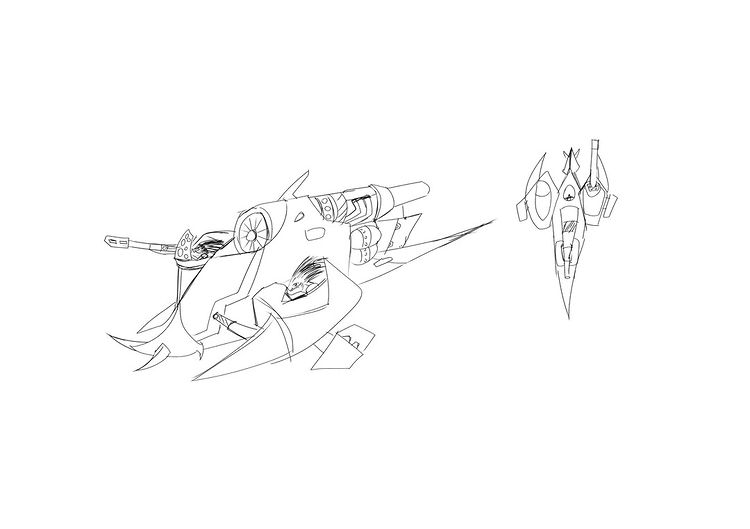 I would absolutely love this.
As many others have been saying for years, Tau auxiliaries need more love. Especially Kroot.
I just hope that a range refresh with a dedicated codex will happen someday.

When I've always thought of Kroot Vehicles, I always imagined the Brute Vehicles too. And to be fair, getting only two vehicles would be pretty consistent with how much GW seems to care about the Kroot. T.T It's such a shame as I think they are one of, if not the most interesting race in 40k.

I would be all in on a Kroot refresh/own army. My current 1k all Kroot army is surprisingly strong (with the inclusion of the Legendary units), but I'd still love to see more models added to the mix.

When I've always thought of Kroot Vehicles, I always imagined the Brute Vehicles too.

This makes sense. The Kroot fly around in warsphere, the Brute chooper looks kinda similar in aesthetics.

There's been rumors. Of a open top transport for kroot for years

There's been rumors. Of a open top transport for kroot for years

Any work on Kroot or any Auxiliary units or vehicles would be a great improvement.  Such as Spyer hunters from Necromunda. turned into human auxiliaries would be  great.

If Kroot had vehicles I always imagined something similar to the Wookie vehicles from Star Wars, made of fairly advanced wood and such. Your sketch reminds me of the Wookie designs.

I cant say I love the idea of Kroot vehicles. I think it works for starships because it's kind of a requirement for Kroot to have a place as mercs within the 40k universe. Warspheres are more akin to vast colonization ships then actual battleships, their purpose being for Kroot migrations to new biomes. Even smaller craft like Dayhek Grekhs gunship make sense due to the need to ferry around smaller groups.

But ground-based vehicles tend to bother me as a concept because it kind of goes against their themes. Kroot have eschewed industrial society for a darwinian, primvatist one. Stuff like Warspheres are a necessity. I much prefer to see the return of Knarlocs, perhaps flying Kroot forms, etc.  Cool drawing though, aesthetically it looks the part imo.

When you said flying Kroot right after Knarlocs it make me think of giant flying Kroot, like a Kroot the size of a Harridan for some reason... it'll never happen, but damn that would be epic.