22 replies to this topic

We Bear the Word
Clothed in darkness, gilded in fervor
By aethyr bound, an unbroken creed
Through our faith we are known
For we are the Ebon Word

We Bear the Word of Lorgar
Our pact is hidden, our blood runs true
We are a twisting blade in the hands of the Despoiler
We guard the Eightfold Path
For we are the Ebon Word

We Bear the Word of Chaos
Bound to break the dreams of Man
Our travels vast, our works unending
The red hands of Chaos reach out
For we are the Ebon Word

Hello all. This is going to be a log of a project that I've had in my mind for a long time. I've always found the Word Bearers to be fascinating but unfortunately an overlooked Legion for the Chaos Space Marines. Much of that is due to their lack of good rules and any real sort of "cool" legion identity- the other Undivided Legions have pretty set gimmicks with the Night Lords being all about terror and fear, the Iron Warriors are masters of sieges and big guns, and the Alpha Legion being all sneaky, the Word Bearers were relegated to being the "priests" of Chaos for a long time which gave them little character or interest. With the Word Bearers trilogy, the Horus Heresy focusing on WBs being the start of the Chaos infiltration, and Dark Apostles coming into the game there has been a bit more interest in them and I thought it high time to start up a pseudo-Kill Team of Word Bearers.

So far, I've got the basis of the Ebon Word worked out- they are a "traitorous" Warband of Word Bearers who serve Abaddon in his Black Legion, though they are not fully integrated into the Legion (they will have their right arm colored as the Black Legion while the rest will be classic WB colors). In truth, they are a devoted Host that is following instructions from the Dark Council to get close to Abaddon and monitor him.

The Kill Team itself will consist of two Daemon-Princes (an Ascended Dark Apostle and his prime Acolyte), two Sorcerer-Lords, a First Acolyte, a Coryphaus, and two Warrior-Lords, making the sacred number eight. Currently I have everything but the Daemon-Princes shipping to me now, and will probably be able to get some small converting/painting done in the next couple of weeks. This project is kind of a creative break for me, as I've been going pretty strong with my Primaris marines and Necrons for the last four months, and will have another eighteen months of similar models to go once the Imperium mag starts here in the US. So getting the chance to grab some neat looking Chaos minis (I have no chaos at all), doing some minor converting (and learning how to GreenStuff), and painting a different scheme should help me stay hobby-sane while I work through the mag's contents.

Anyway, thanks for looking and I hope you'll enjoy what I come up with in the future! 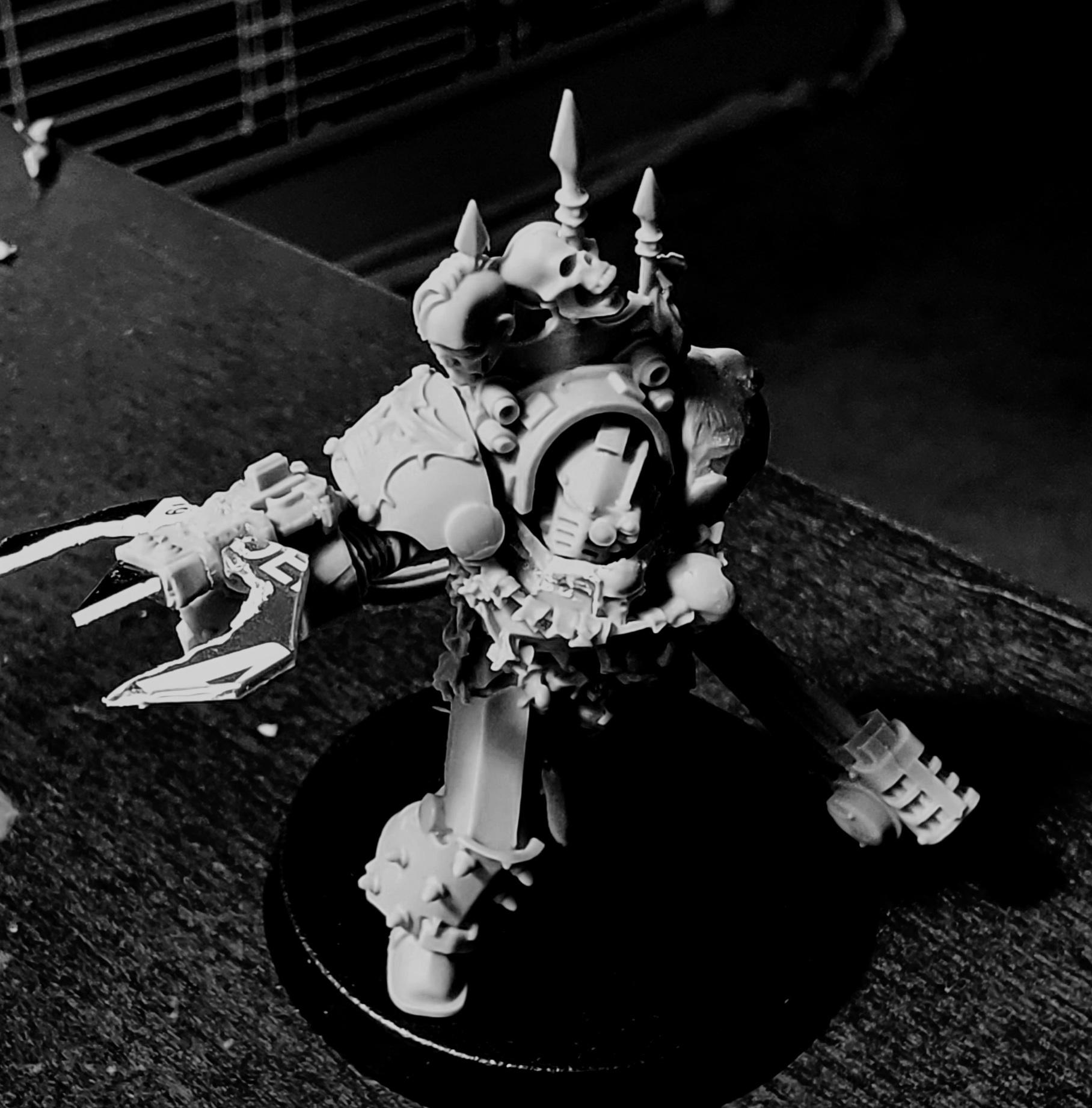 I am the fury of the unspoken Word

I am Anointed, by my Father's hand

Blood and bone, skulls and skin, are my sacraments

Let those I slaughter be sanctified by my blades

Chaos the Undivided will be my guide

Ebon Word am I pledged

Ebon Word am I bound

For I am the Gren'dal, the furious death waiting

This looks like an excellent project, can't wait to see it develop.

This looks like an excellent project, can't wait to see it develop.

Thanks! It will be slow, as this is very much a side project, but I'm looking forward to creating an interesting warband.

I also have some plans to have these guys be part of an Army on Parade board that features one of my yet-to-be-built Inquisitors, a life-support bound Radical who finally turns to full heretic in return for extended life.

Very interesting lore behind the warband

looking forward to see how this all pans out

"If a man gathers ten thousand suns in his hands... If a man seeds a hundred thousand worlds with his sons and daughters, granting them custody of the galaxy itself.. If a man guides a million vessels between the infinite stars with a mere thought...Then I pray you tell me, if you are able, how such a man is anything less than a god." - Lorgar Aurelian, Primarch of the Word Bearers Legion

Looking good so far, Word Bearers are one of my favourites and can prove to be an excellent modelling opportunity. I look forward to seeing more! 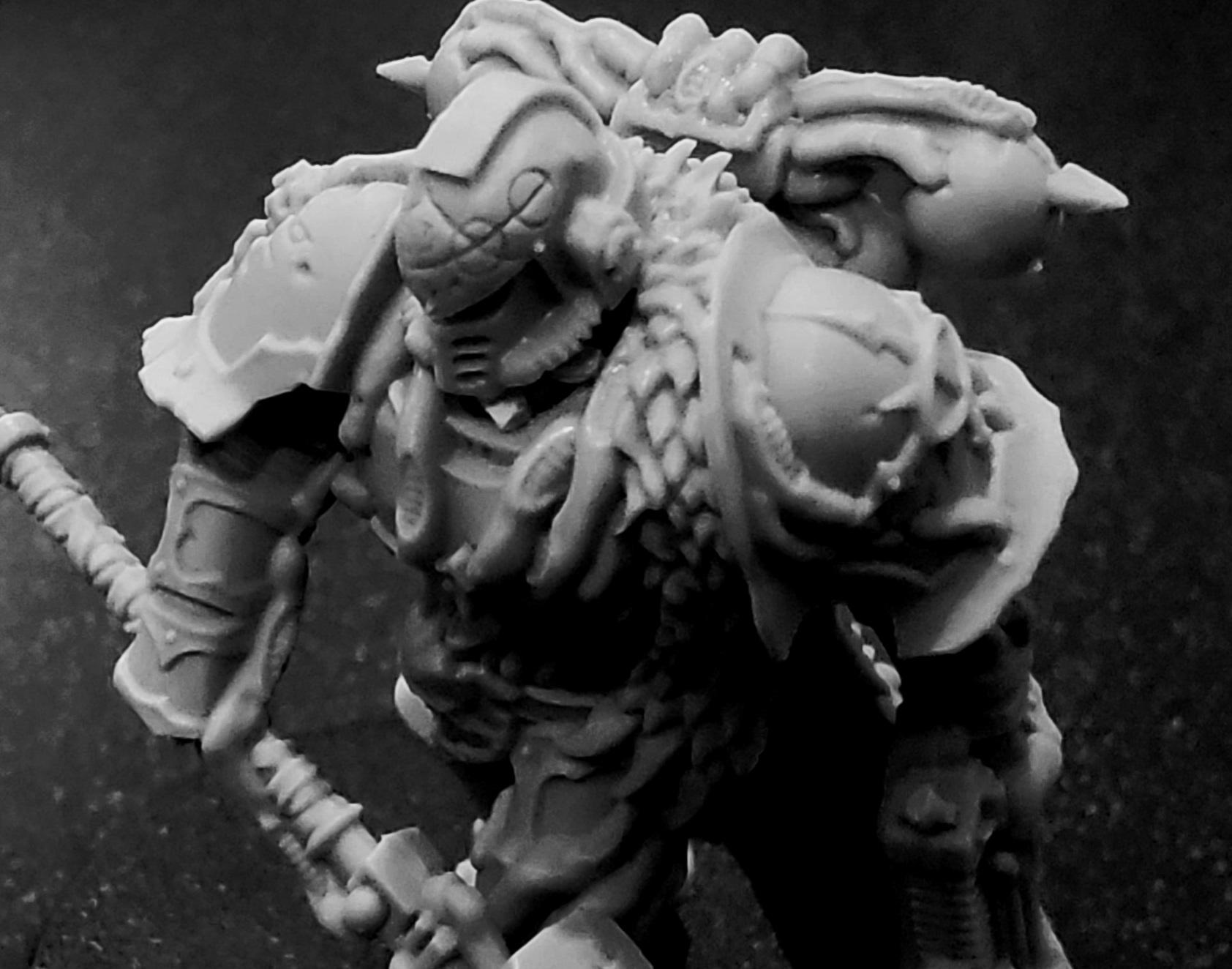 -
Coryphaus Abraxis of the Ebon Word

Very interesting lore behind the warband

looking forward to see how this all pans out

Thanks- I'm looking forward to it as well

Looking good so far, Word Bearers are one of my favourites and can prove to be an excellent modelling opportunity. I look forward to seeing more!

Thanks! Most of my modeling stuff will come a bit later, with the two Daemon Princes, as I really like the various "new" CSM models that have come out in the past few years that I'll be using. Mostly head swaps for the Astartes- got a set of HH Word Bearer helms that I'm loving, with some GS "ribbons" that I'll be putting on hopefully later this week. 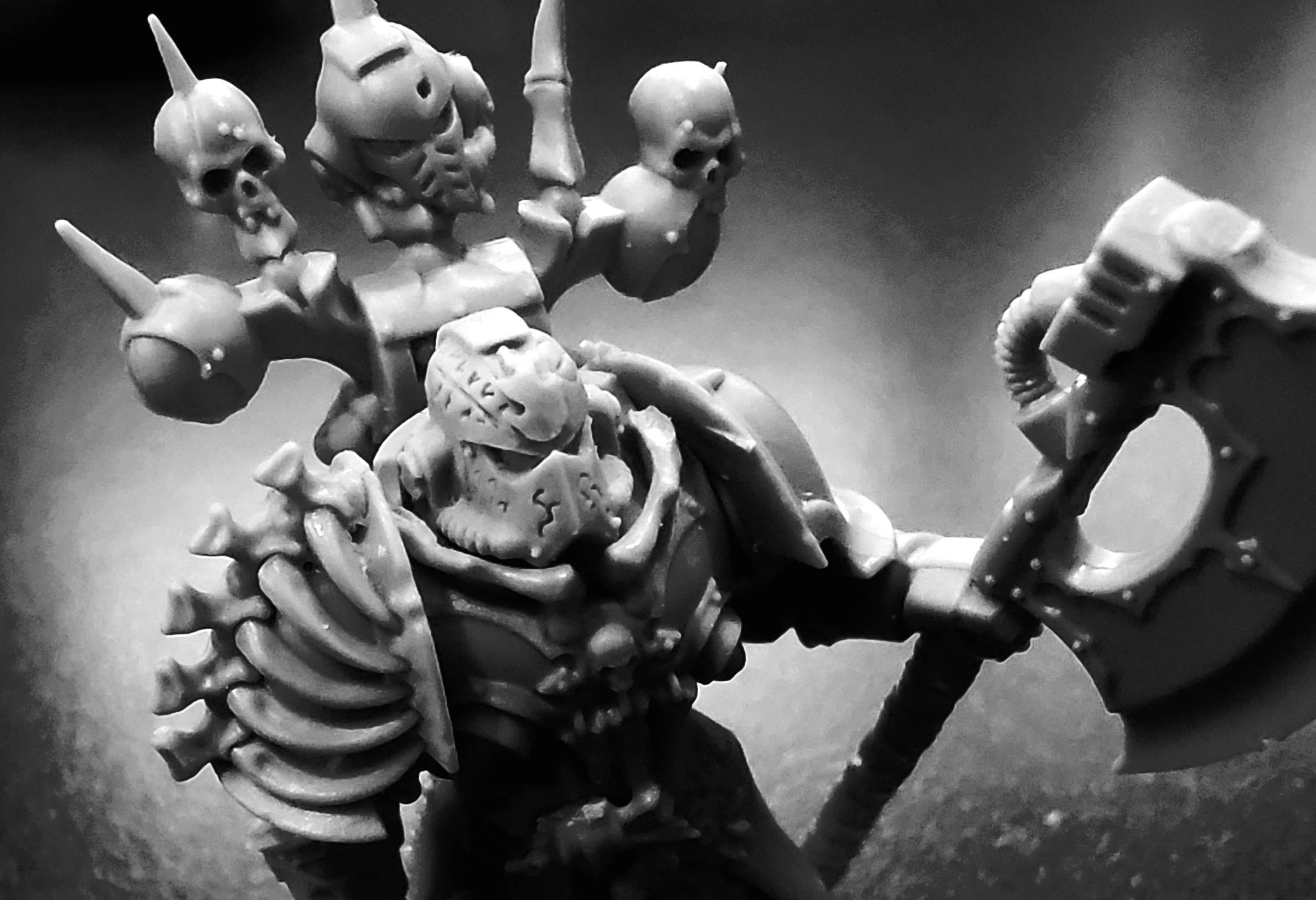 Thank you! After seeing your work that is a big compliment!

Thank you! After seeing your work that is a big compliment!

I'm loving the combination of bits you're using, they are going to be a mighty unique and characterful force!

Some fantastic conversions. Loving this thread. Keep up the good work. 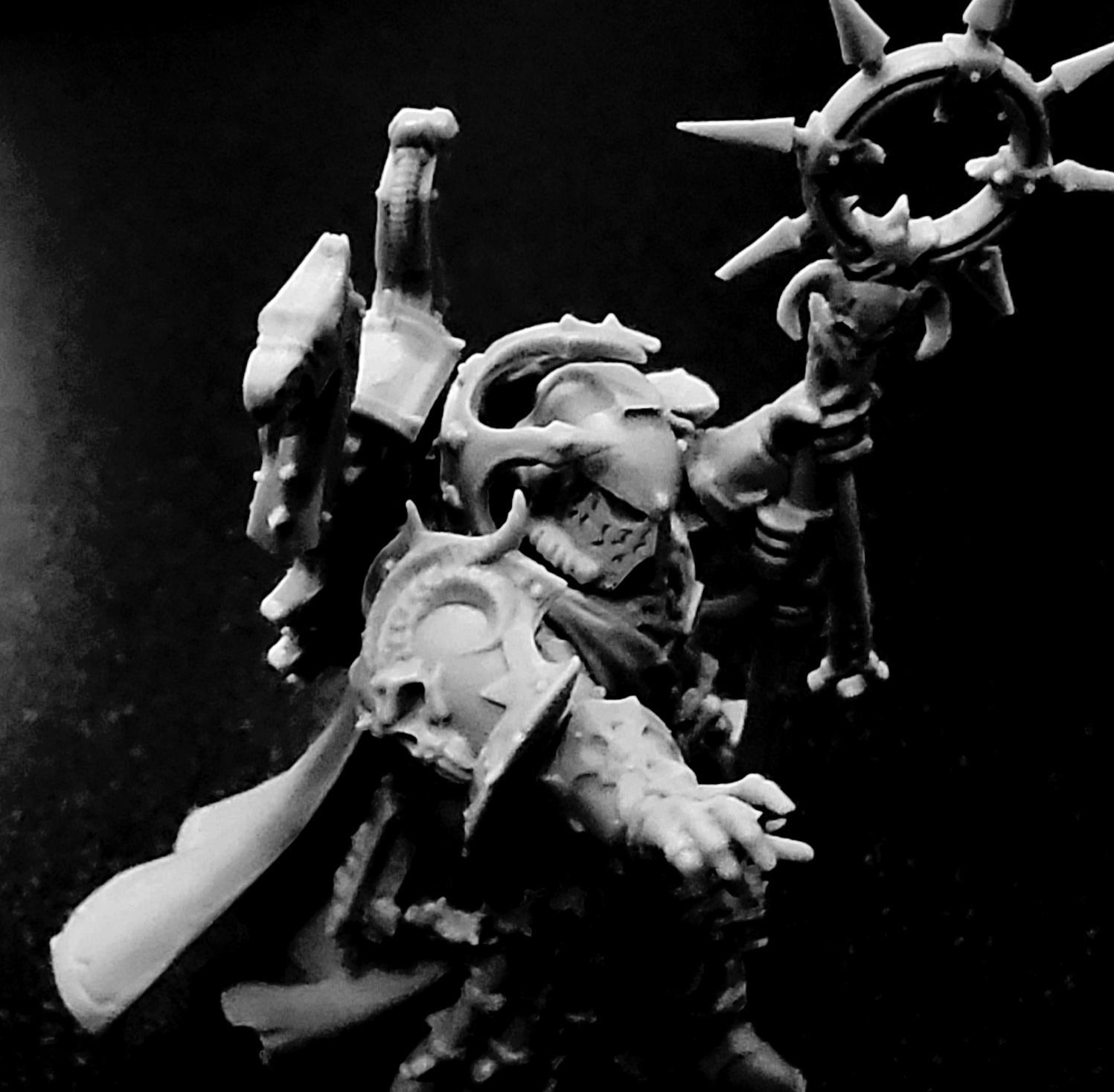 The blessed Erebus states:
Honored are those with the Sight,
for they pierce the veil of the real and the spirit
Damned are those who turn from the Four,
for they will find no succor in death

Some fantastic conversions. Loving this thread. Keep up the good work.

Thank you. So far I've been very lucky in that I haven't had to do much more than head swaps. I'll be working on greenstuffing some more scrolls and prayer-papers on these guys, but the sculpts themselves work really well for Word Bearers already. The next Sorcerer I have will just be a basic Master of Possession, as that model is pretty much on point with what I want without having to do any work on it (bar the eventual papers...).

Looking at placing an order in a week for the next two members of the Ebon Word- the Daemon-Herald (Syll'Esske model) and the First Acolyte (HH WB terminator praetor). Then I'll just have the Daemon-Apostle himself to get. 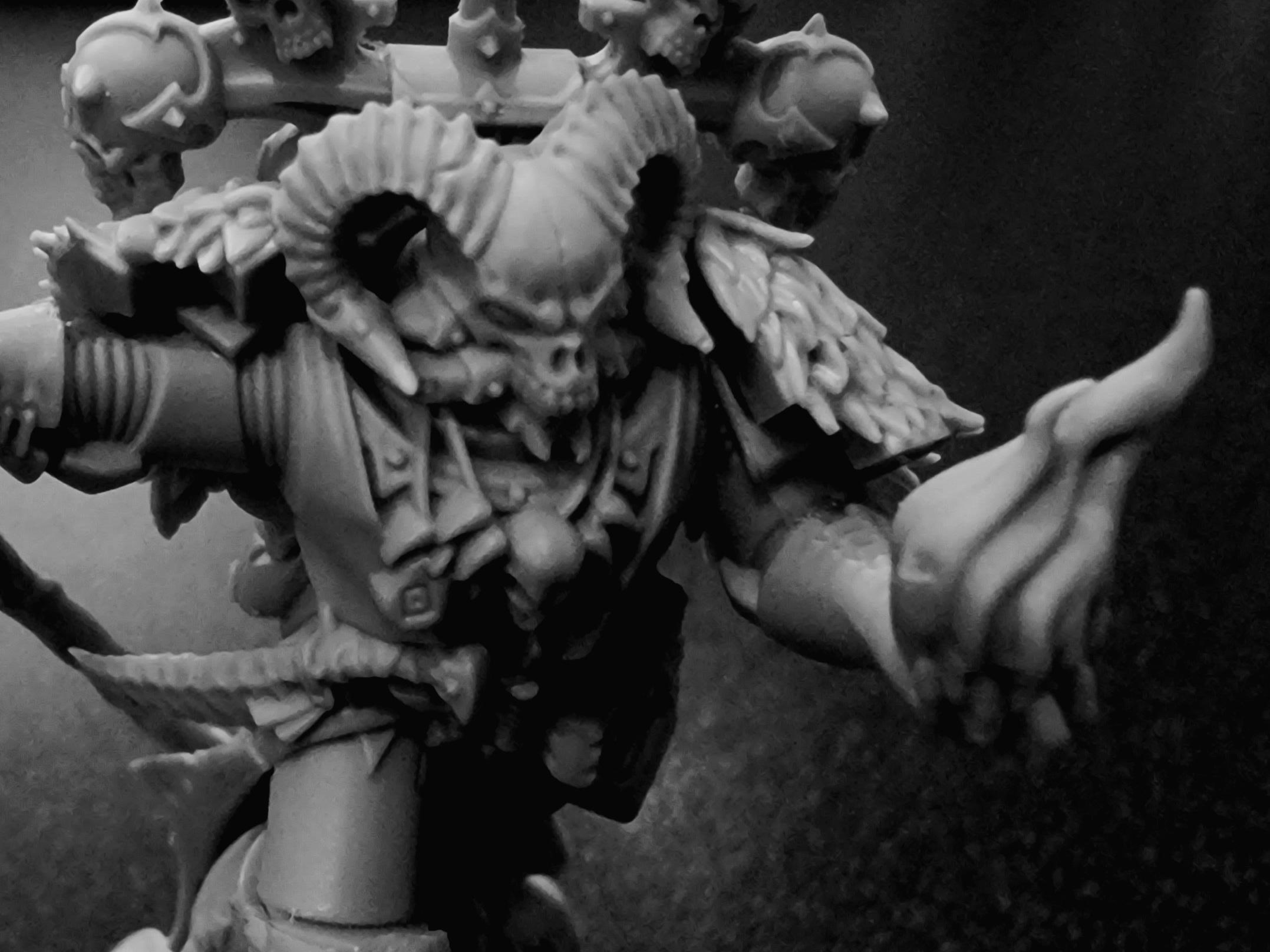 For Chaos, the Masters of All
For Lorgar, the Golden Prophet
For Abaddon, the Power-to-Be
For the Ebon Word, the forlorn Host
--
Kol Kolgar, Thaumatist

Both those new characters are looking amazing. Always had a spot for word bearers and your doing them incredible justice. Got that nice balance of occult but not lost to powers they can’t control. Really captured the belief that they are masters over the warp.

Both those new characters are looking amazing. Always had a spot for word bearers and your doing them incredible justice. Got that nice balance of occult but not lost to powers they can’t control. Really captured the belief that they are masters over the warp.

Thank you very much! I'm really glad I chose Word Bearers for this project, I was debating between them and Night Lords but the WB just don't have a lot of support, so they came out on top. My view of them is that while they are the "preachers" of the CSM, that doesn't mean that they are raving fanatics (though some are), it means that they chose to use the powers of the Warp/daemons to the purest effect. I want them to be suitably preachy and creepy, but in control of themselves and the effects that they harness, for the most part.

Good news is that the WB termie praetor for my First Acolyte and the daemon for my Herald will be coming in the next week or so (eBay shipping is always iffy...). So I should have those two with fluff and pictures by the end of the month, and I might even get a base color laid down on the guys currently built. 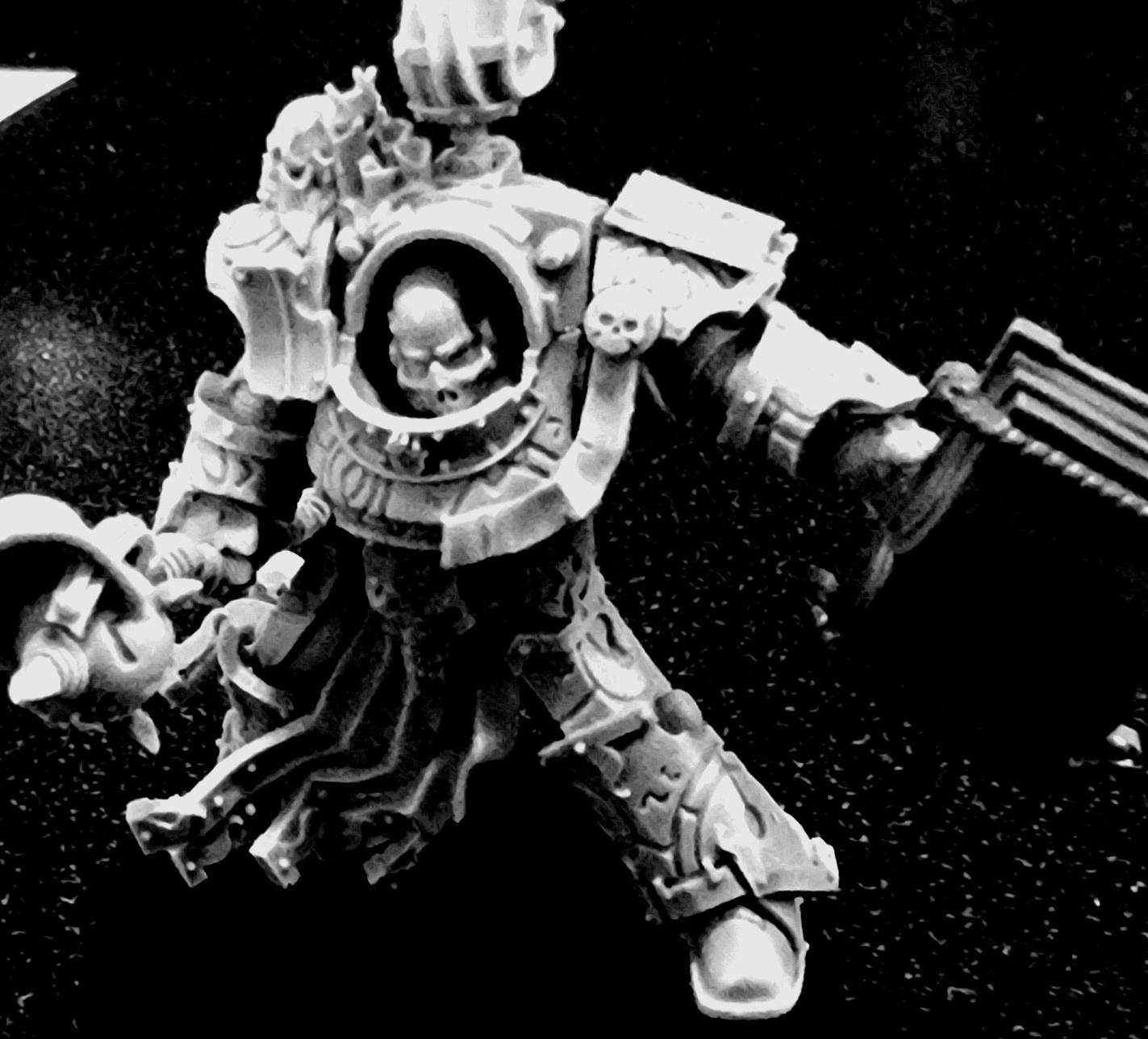 From the sermons of the First Chaplain:
Doubt begets failure, never doubt the Word
Sever the thoughts of serving one God alone
Chaos united shall run through your veins

From the catechisms of the Black Cardinal:
Seek the powers of Chaos through force and guile
Trust no mortal, only faith will be your guide
Bring the aethyr into your soul

From the Book of Lorgar:
Turn to Chaos when lacking true purpose
The Four will fill you with the untapped potential of the Warp
The Truth is within the Word

Through these blessed words do we learn our Path

Through these holy scriptures do we steel our Faith

Through pain and fire do we temper our flesh

The Word and the Truth do we bring to the unenlightened

For the Ebon Word we serve
-
First Acolyte Vor Skral 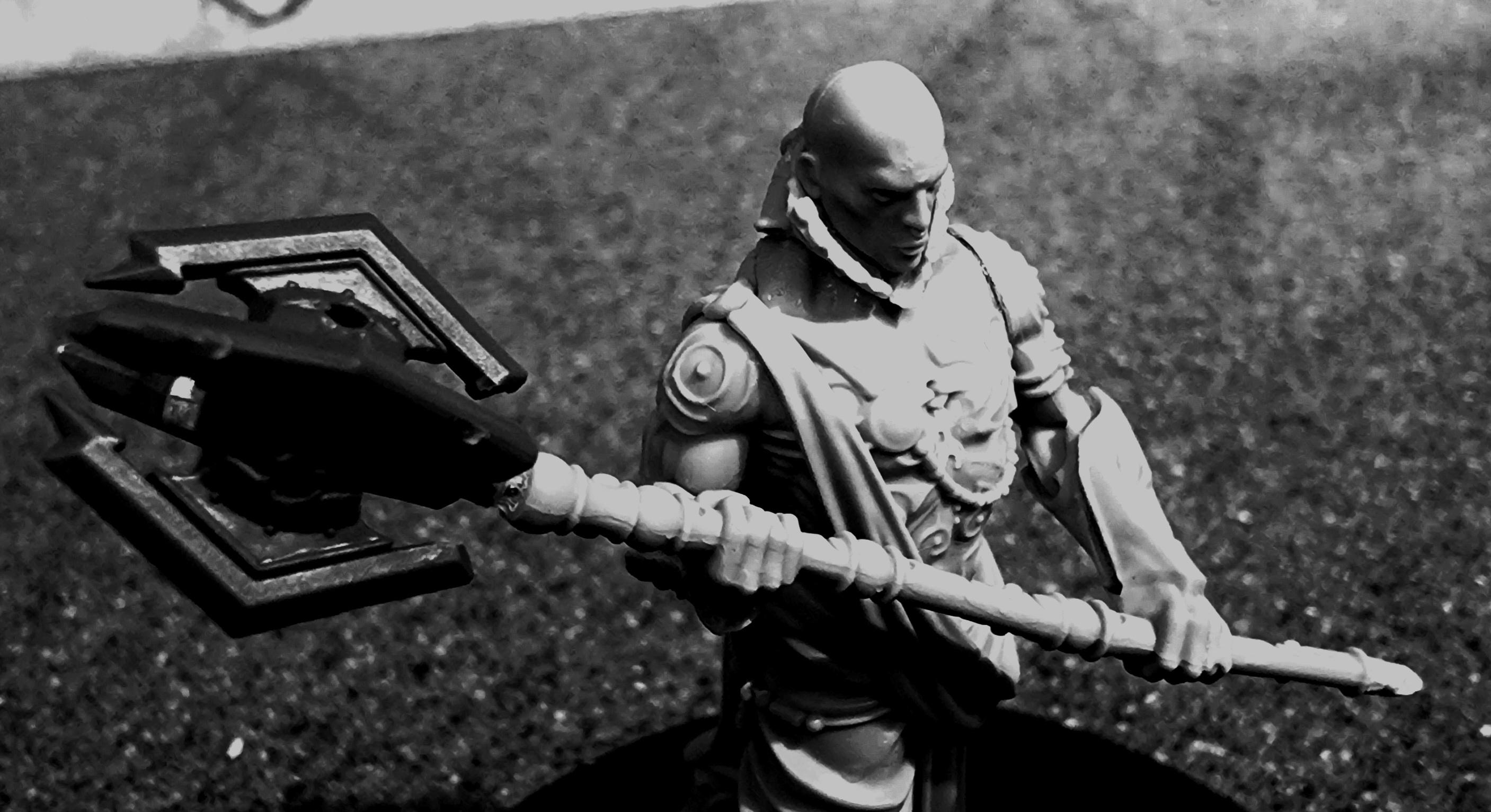 He strides down the Eightfold Path with burning footsteps
He is the Thrice-Born, the deified lord of the Host
Born once on Colchis, the desert world of faith and old gods
Born again on Khur, the ashes of Monarchia bitter in his mouth
Born anew in the glory of Chaos, risen above his mortal flesh
Made to bring Lorgar's writ to the realm of the material
The penitent of the Gods, the fire of the Word
Power without price, steel wrapped in faith
Iscarne! Iscarne! Iscarne!

Daemon-herald of the Ebon Word

Oooo this last one! 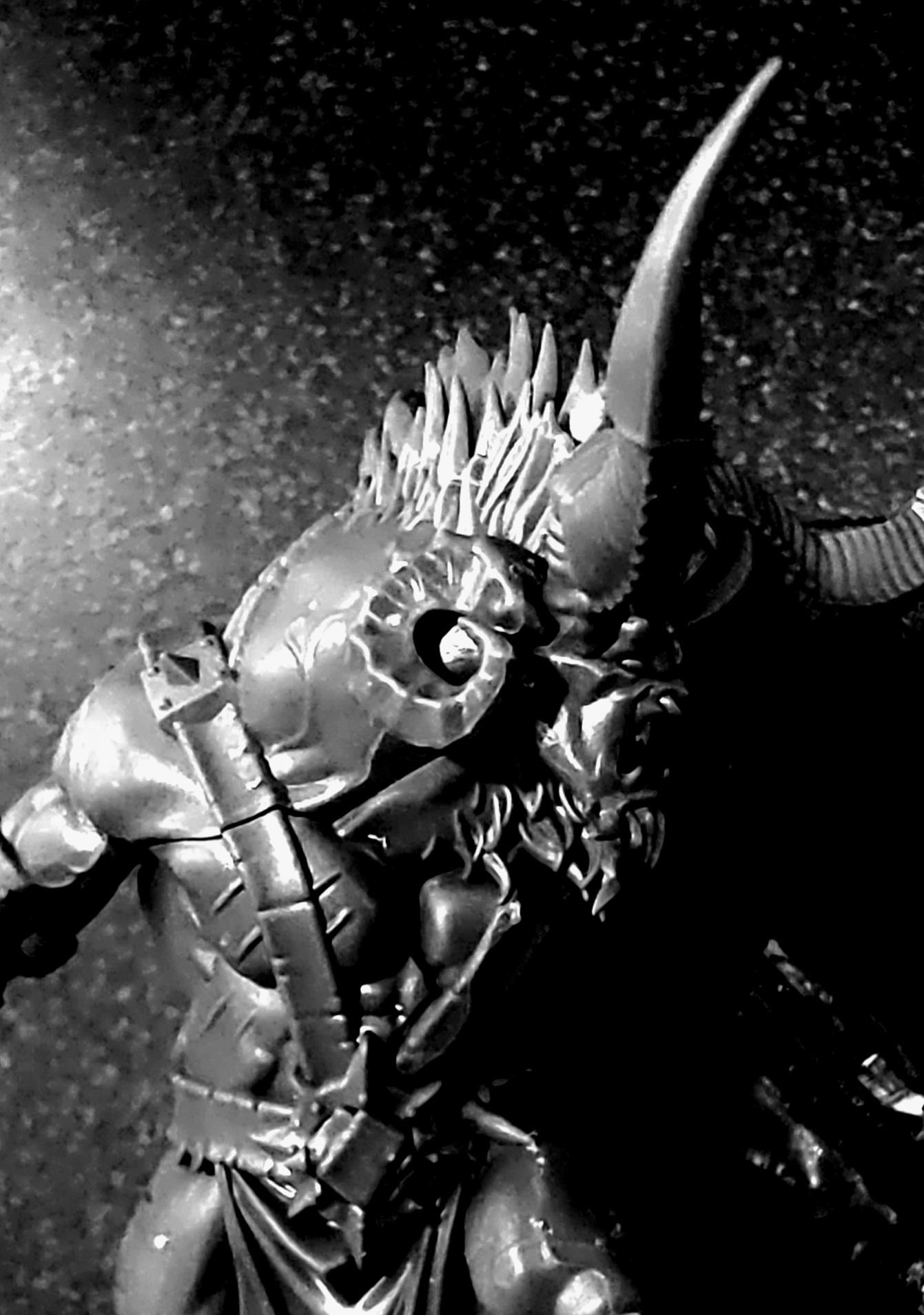 Daemon-Apostle of the Ebon Word, formerly Vol Tuvak of Colchis

Also tagged with one or more of these keywords: WIP, Word Bearers, Fluff