After a very, very long hiatus, I have decided to return to Warhammer 40k and have decided to give 9th edition a try. I have not played 40k since the early days of 8th edition, where I soured in the skewed Codices, stratagems everywhere, command point optimization and where it seemed that the way to go was to have as many overlapping auras as physically possible.

Having talked with friends who also gave up on 8th, we have decided to give 9th a spin - specifically 9th Crusade rules.

To that end, I have gone and bought the 9th Rulebook second-hand, and have also closed a deal for the current 9th Dark Angel Codex second hand. That leads to the first question:

1) Are there any other rule books I need? (Because GW has NEVER been nice enough to have all the rules in one place...)

As for the starting armies - since I have no Codex, it is still a bit in the wind, as to what will constitute the initial Crusade force. As I have been collecing Dark Angels since 1992 - and then only seriously since 2001, I could field an army of painted Firstborn...but then what would be the purpose of this thread?

Instead I have decided to try out the new toys on the block: the Primaris usurpers.

Therefore I spent January 1st putting together all the Primaris that I got in the Dark Imperium starter box back in what, 2017? I only ever managed to finish one of them - a lieutenant, but almost finished the Gravis Captian, the Ancient and the Hellblasters. They are therefore probably the ones that will get done first. Below you can all see what I have to work with for the Crusade coming up: 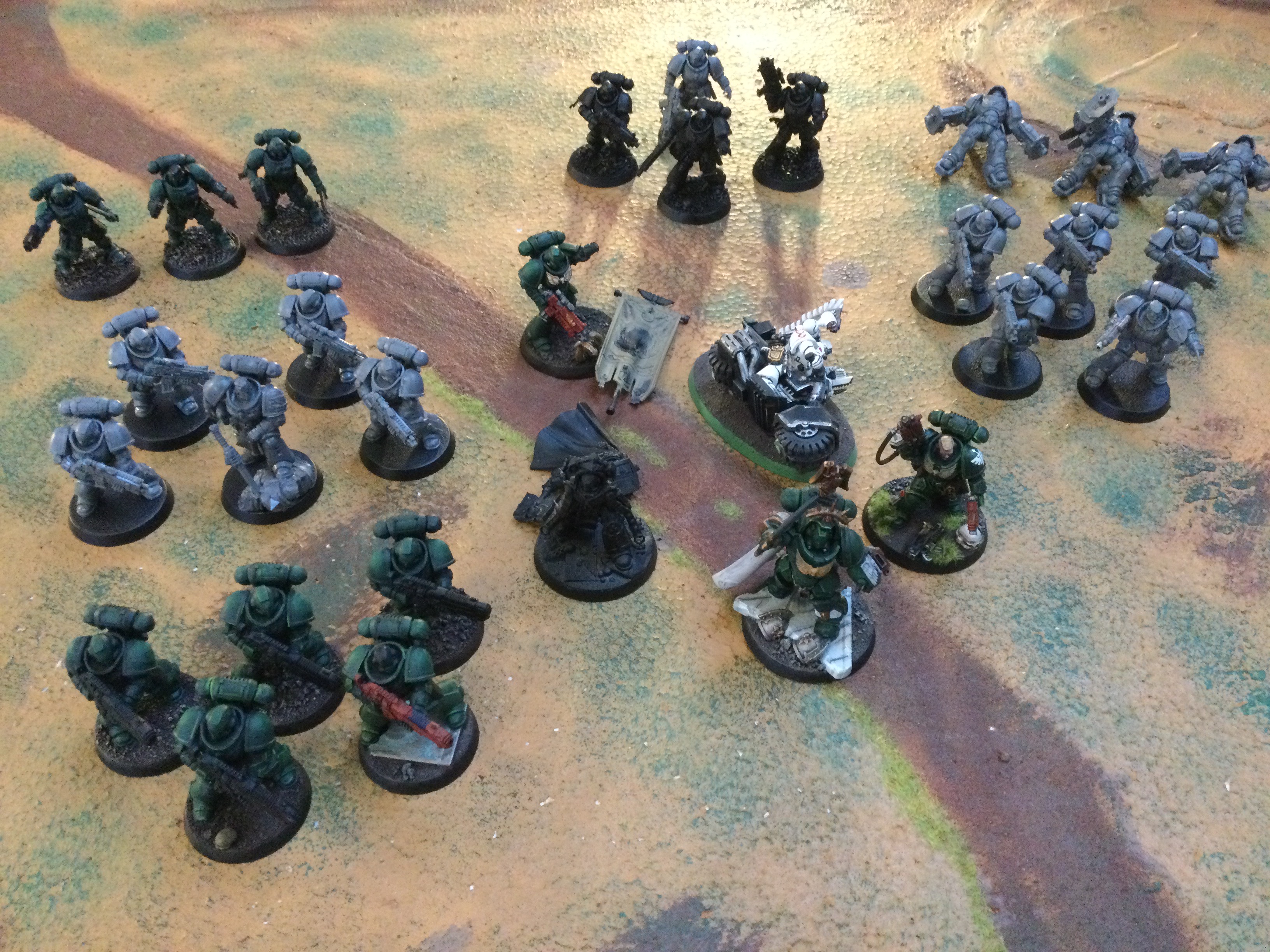 As for their background, it is still a work in progress...but I know that the Firstborn Termintor Chaplain is there to provide spiritual advice to the good, newbie Gravis Captian (and not at all to supervise, monitor and surveil him).

My friends will be playing, respectively, Necrons, Sisters of Battle, Grey Knights and Black Templars. In other words - lots of power amour saves.

I am really looking forward to painting some Dark Angels again, after not having painted any in years.

Till the Sword is reforged!

For your first question, you will need a copy of Codex: Space Marines alongside the Dark Angels supplement, it'll provide the core datasheets and some core rules. That should be the only other book you need.

Welcome Back Brother,
Yep what WOTL says; all the toys you have assembled are in C:SM, the RW, DW and DA Characters are in C:DA

Thank you both for your replies. I figured it was too easy with just a rulebook and codex. I guess I will have to scrounge up the Space Marine Codex as well. Amazing how just getting into a game almost equates opening a library....

2) GW has released a number of Crusade campaign packs. Are they needed to play the Crusade games - just "nice to have" - and are any of them better than the rest?

Now that one I have no idea.

I also don't play 40k following 8th (well a couple of games of 9th with my kid but they don't count), that and my gaming group if I did play are all super competitive tournament types and don't play Crusade.
But, based on my books you should be right for starters with the BrB and C:SM.

Glad to have you back! Enjoy your new project

Having played a Crusade campaign recently with missions from some of the campaign books:

They are nice to have, but by no means necessary.

Playing these missions should be plenty of material for a first foray, and specific campaign books can be added later if you want to replay some conflicts of renown.

Apart from the Codex: Space Marines, the Dark Angels Supplement, and the Core Rulebook, I would also suggest getting the Chapter Approved 2022 when it comes out soon(-ish) for point updates and similar.

Do not meddle in the affairs of dragons for you are crunchy and good with ketchup.
"The best way to get the right answer on the Internet, is not to ask a question ... it's to post the wrong answer." - Ward Cunningham

Thank you for your replies; much appreciated!

I will stick with the main rulebook, the DA Codex and see if I can find the Space Marine Codex second hand. Then I will take a look at list building. For now, I will plod happily along painting a few of the above pictured minis.

eBay is a good place to get discounted rulebooks. You may even be able to find used versions on Amazon.

For list building, check out BattleScribe. Great way to keep up with points changes.

Cheers for your reply!

eBay is a good place to get discounted rulebooks. You may even be able to find used versions on Amazon.

For list building, check out BattleScribe. Great way to keep up with points changes.

BattleScribe is a list building app that you can download to your phone or PC. Greatly simplifies the process, no flipping around the book trying to figure out which options you are allowed to take, what the points for that weapon are etc. Highly recommended.

Thank you for your replies; much appreciated!

I will stick with the main rulebook, the DA Codex and see if I can find the Space Marine Codex second hand. Then I will take a look at list building. For now, I will plod happily along painting a few of the above pictured minis.

I think getting back into the game with a Crusade campaign with friends is probably the best way to get the most enjoyment to frustration ratio. Grats!

I prefer the GW Warhammer 40k app for my list building and info needs ... but I also watch Warhammer+ so it was a good deal for me.

Also tagged with one or more of these keywords: Dark Angels, Crusade