First off, a shot of the whole gang, prior to priming. I want to do all my initial stages to everyone before going on the the next step, and the Skull Champ and Khârn are still needing some work in the sculpting stage.

You might notice these berzerkers are from a time long gone. I wanted to give a good paint job to some of my older models, so I dug out my oldest khorne berzerkers, swapped out a bolter for a plasma pistol on one, and gave them a fresh rebasing. I also drilled out the barrels. 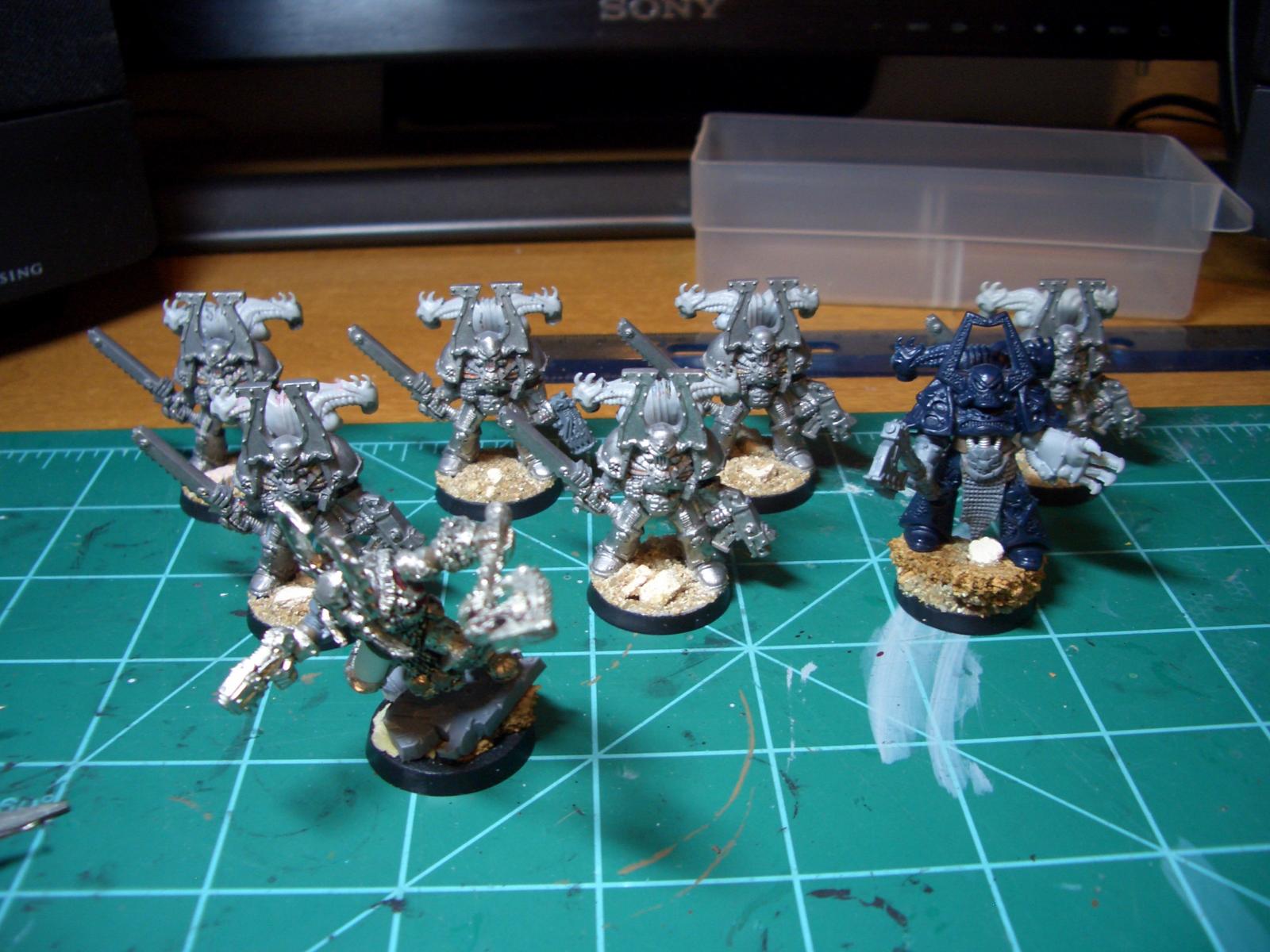 Next up is the Skull Champion. I wanted a model that stood out from the rest of the squad, but one that was still in roughly the same style and age group. Fortunately, my stash of old, unused chaos models is pretty decent, so I dug up a champion model from my Space Crusade chaos troops, cut off the arms below the pauldrons, and added some new parts. What better combo than a power fist and a chainaxe? He still has a little work, and a bolt pistol holster and some skulls on chains to be added. 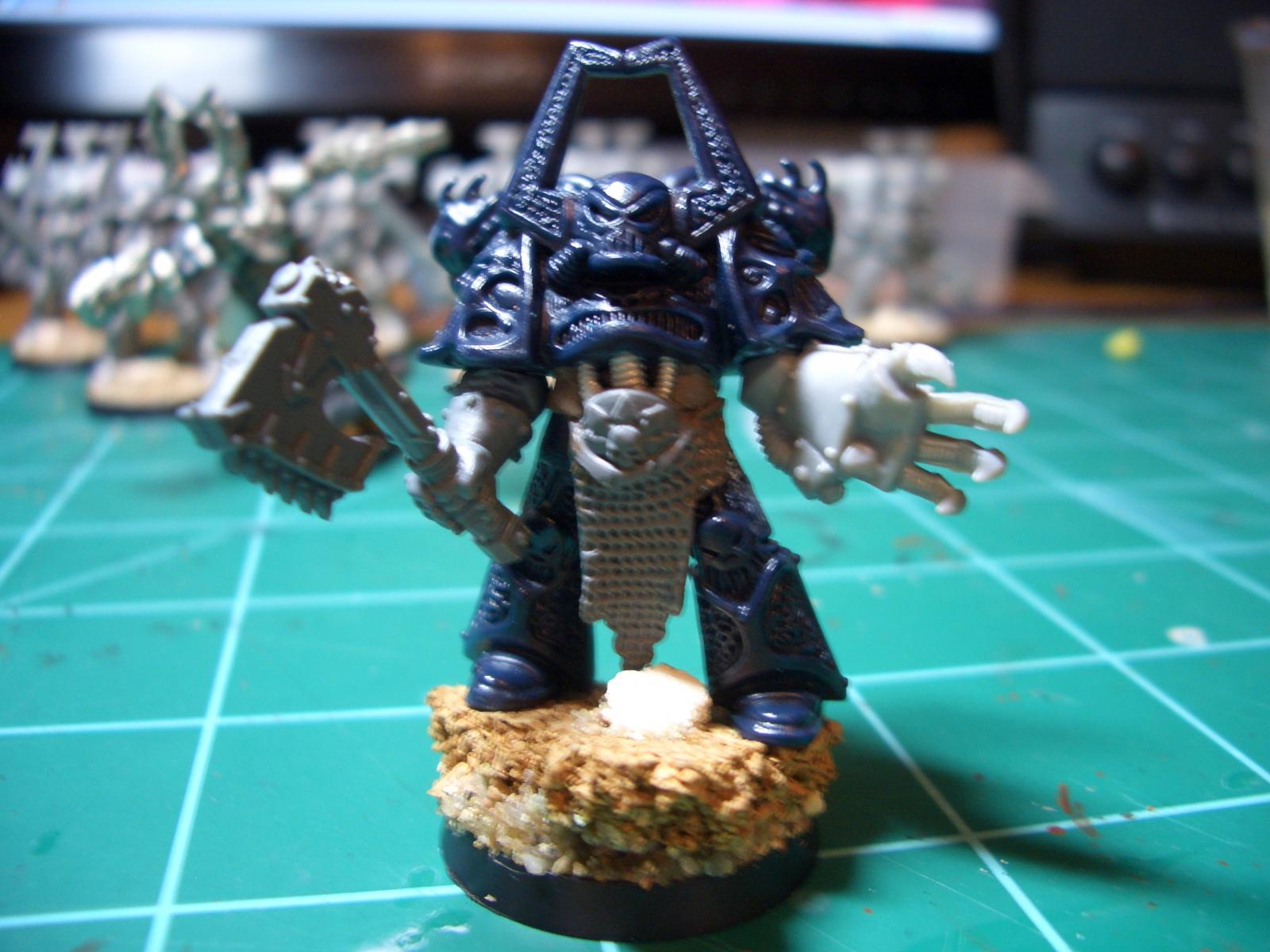 Last is Khârn, who is undergoing some major changes. I love the stock model of Khârn, but I'm ready for something a little more dynamic, so, I cut him apart and began rebuilding. The changes are pretty obvious. He still in a pretty heavy WIP stage, and is lurching a bit more than he will be when he's all put together, but you get the idea. 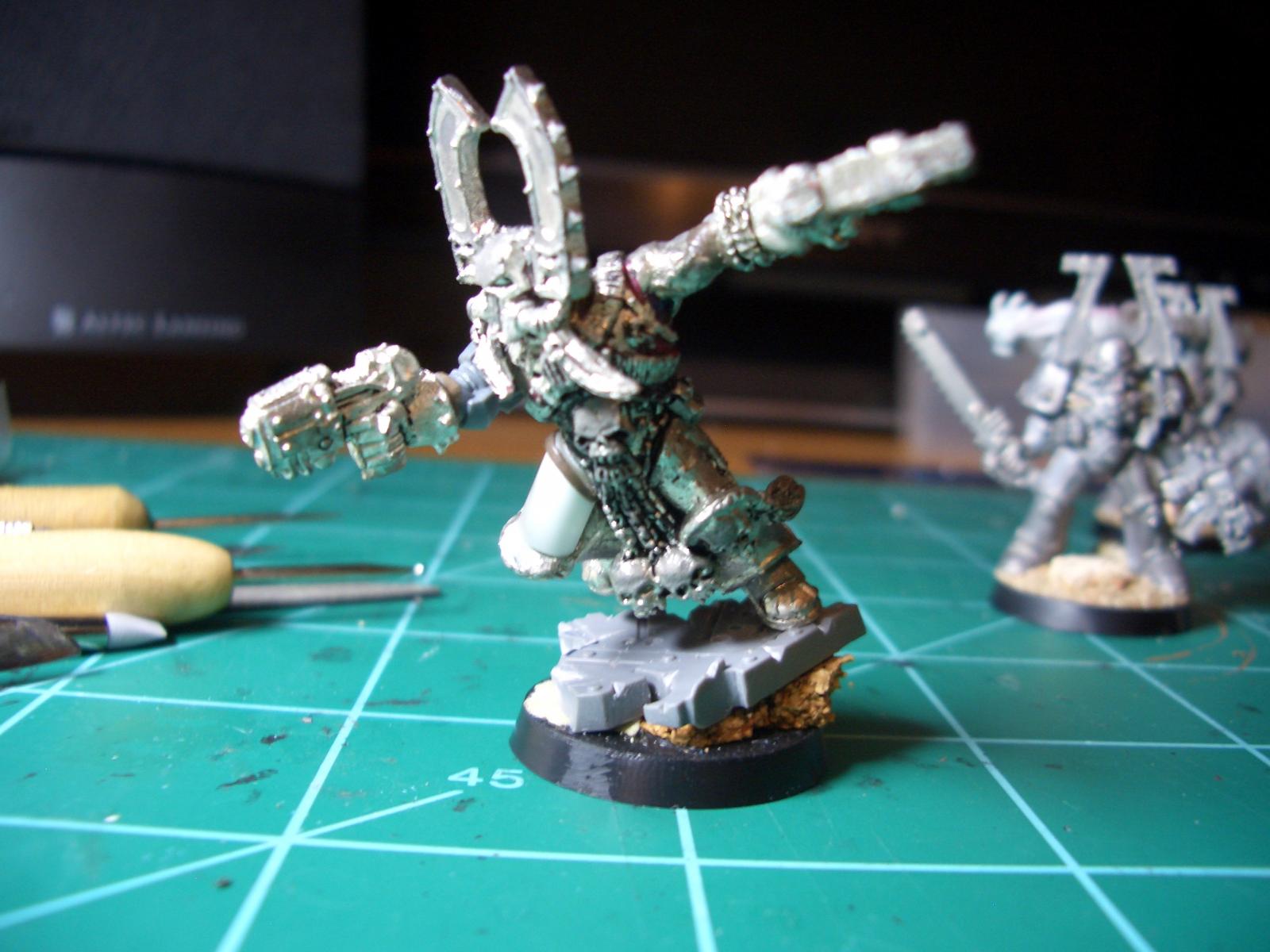 And there you have it. More on this as it develops.

woah i remember my old zerkers in that pose. Nice Khârn I love seeing Khârn getting ready to rip everyones head off.

Great selection of classic miniatures, I especially like what you've done with this one, great use of one of those old Space Crusade (correct?) miniatures

And if they come to life with some sweet paintjobs on 'em. heck that's just cream on my sundae

In the fires of the forge we are wrought, in the inferno of battle we live.

The last update before painting can commence.

First, the finished Skull Champ. He wasn't far from done in the last update, but still... 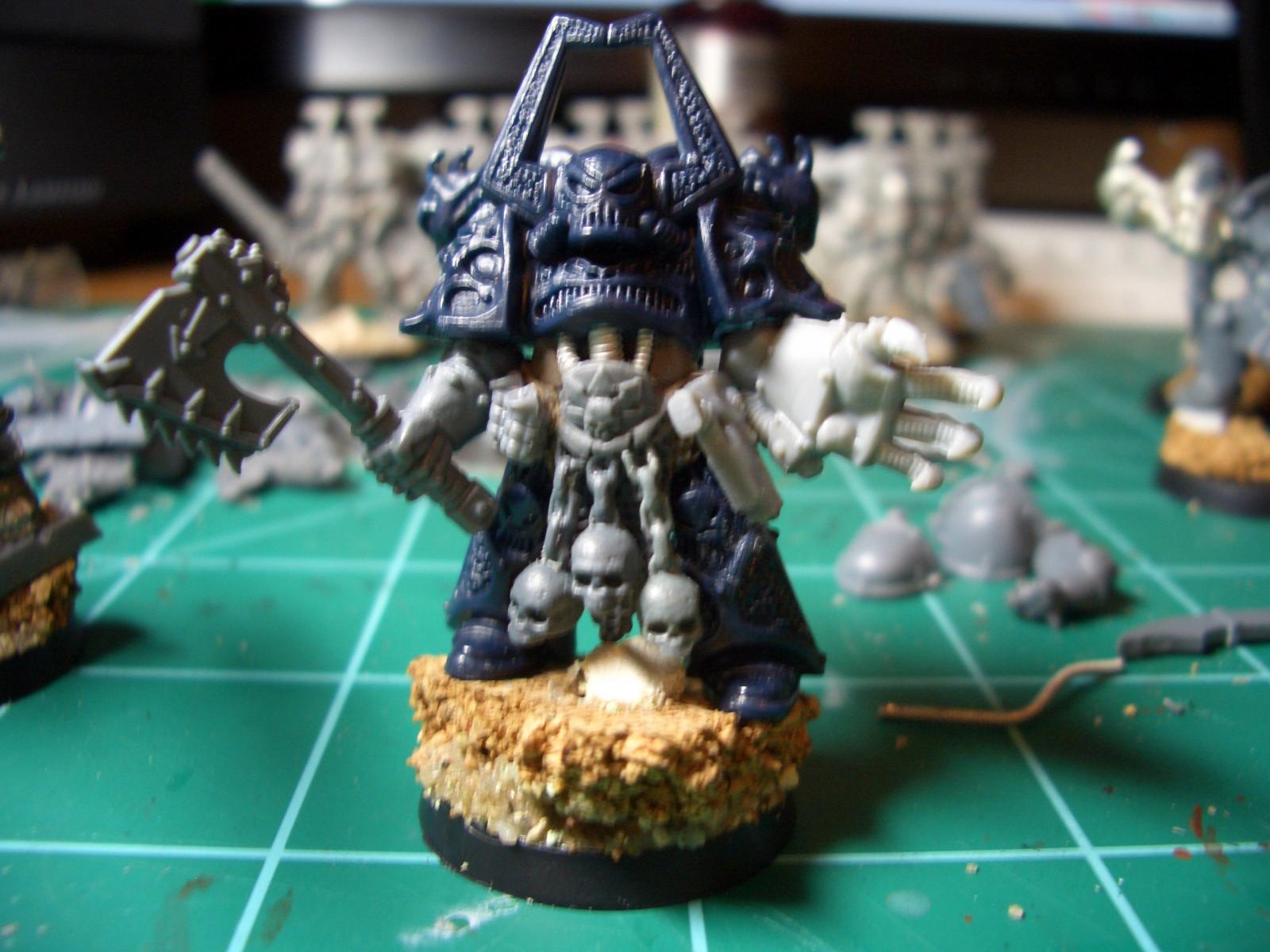 Next up is the finished Khârn. The second shot isn't really great, but hows him leaping better than the first one does. 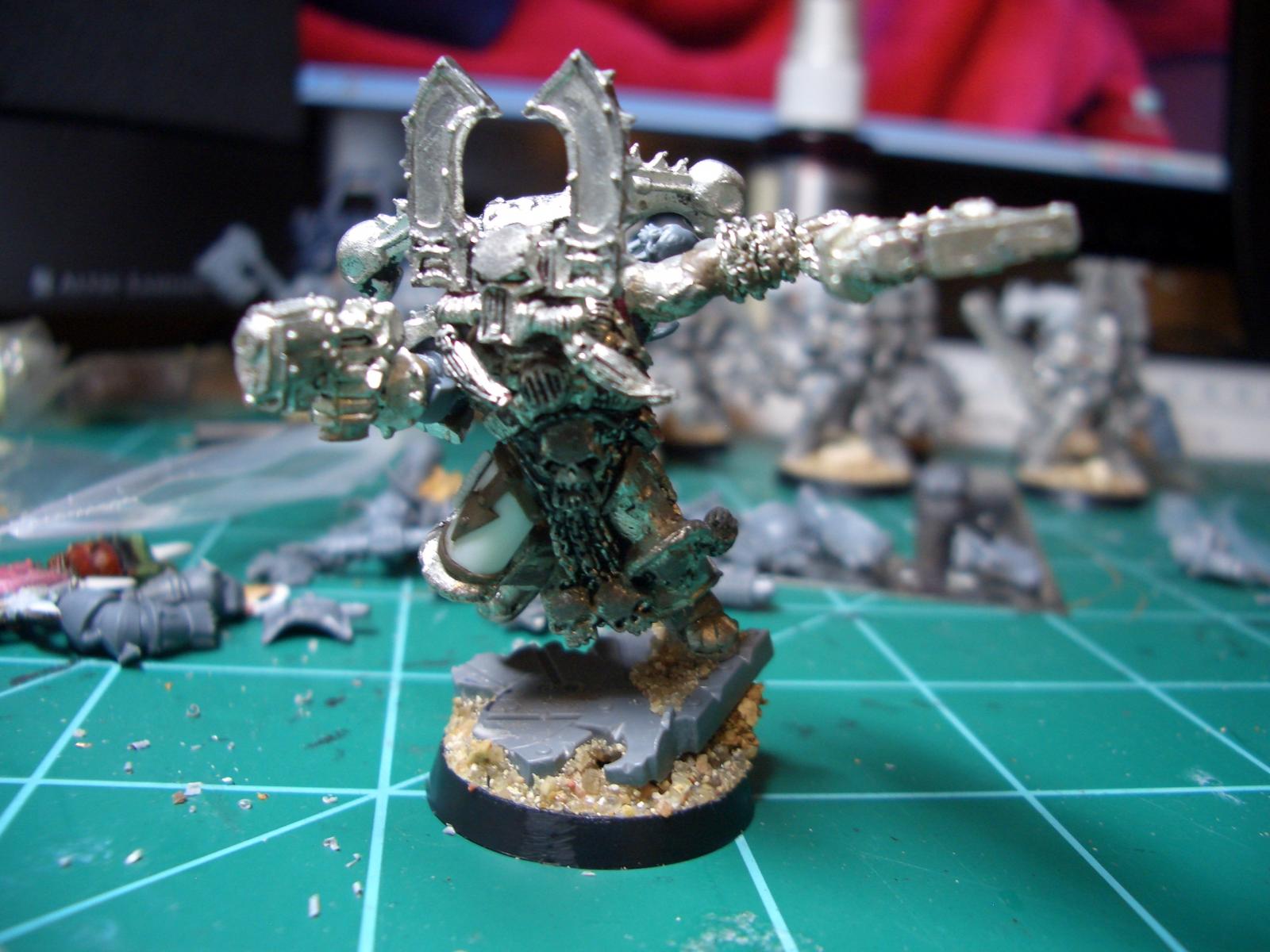 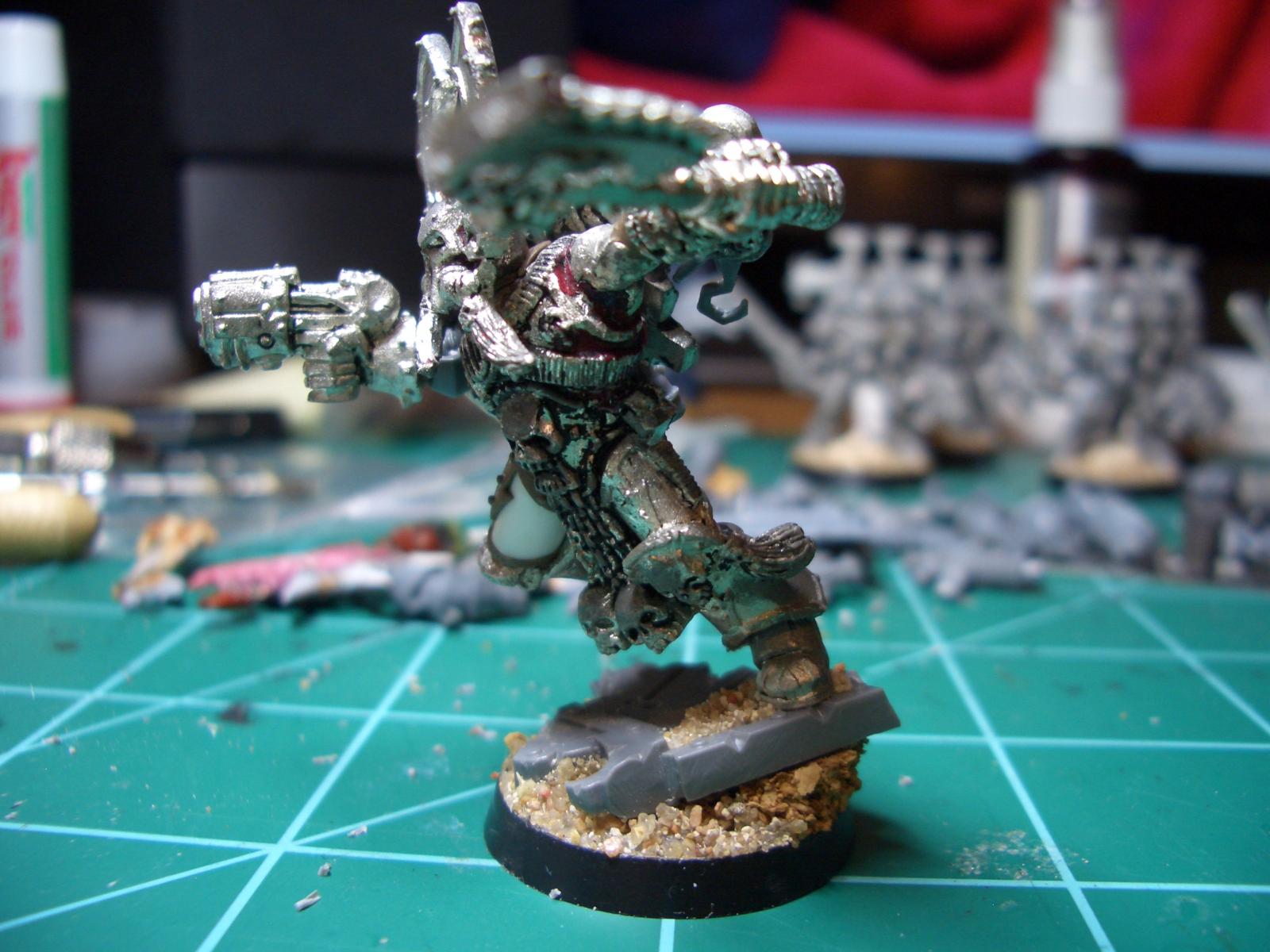 Next comes priming, but I won't bore you with that part; The next time you see these guys will be at least after the basecoat is laid down.


PS. My work area is a mess with my other project I started working on while waiting for brown stuff to dry on Khârn, so I figured I'd throw a pic up. They aren't for the CoC, but they are Chaos Marines, so it still works; Preliminary building for my Word Bearer Chosen squad. 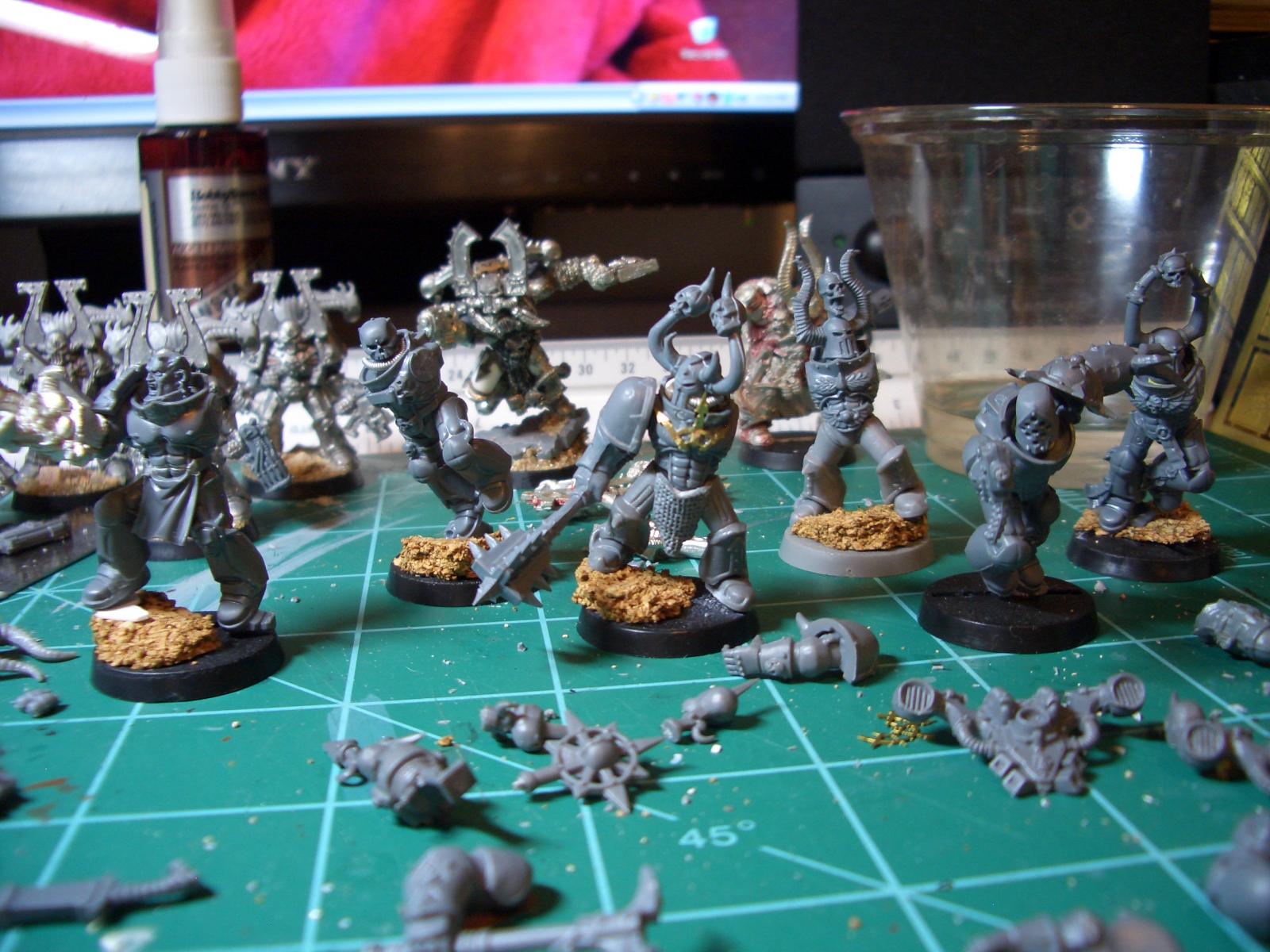 I wanted to use the Sanguinary Guard Torsos for something, and using the helmets and weapon arms from the WHFB Chaos Knights helps me achieve the level of uniqueness I wanted for each squad member. Based on the 3.5 Codex, A Chosen is a champion in his own right, having lead his own warband at some point in time, so I wanted to make each one very individual, and ornate enough that he'd pass for an HQ in a smaller game (under 1000 points, for example) I think I'll manage that, in the end.

More on this as it develops.

Can you give us a tutorial on how you did Khârn's new arm? I've thought about modeling a new version of the betrayer for years but I must say that If the original looked like that I wouldn't ever think of touching it.

The arm was actually the easier part. I took a jeweler's saw and sawed off the shoulderpad, and removed his glove from the rest of his little arm piece.

I then took a plastic extended bolt pistol arm from the csm sprue, and cut the glove off of that. pin Khârn's glove to the plastic arm. fill any gap with a little bit of stuff (brown, green, your choice. I used brown).

For the pad, you'll a dremel, or A LOT of free time. I took my pin vice and and drilled some tiny holes most of the way through the pad (3 holes, 2 on the inside, 1 on bottom, along the area you want to fit the new arm in).

If you have a dremel, take your large engraving tool (looks like a round, twice-baked potato on a stick) and start expanding those holes until you've turned that metal pad into what's pretty much like a plastic pad off a sprue.

If you don't have a dremel, use larger sized drill bits and your pin vice and a file, and do the same thing.

from there, glue the pad on the arm, fill in any unsightly gaps, and the arm is ready to go on the body, once you fix that part up.

I suppose if you're looking for a less time consuming project, you could also just simply rotate the metal pad once you saw it off, pin it in its new position, cut the plastic arm to size, and pin it to the pad, which would save you most of the head ache of resculpting the right side of his torso... but that's not how I roll.

Geez, sorry for the wall o' text. It really is pretty simple in and of itself.

oh whoops my mistake, I meant the other arm the one without armour.

I just took some clippers and cut the chains free from his leg, and then cut them a little bit from his wrist. Took some pliers and twisted his arm down. You get the best traction if you do it at the hand. It'll do some damage to the sculpt, so go back in with brownstuff and clean up the damage. you'll also need to clean his pouches a little, and reapply the lines in his leg cable. I did that with an exacto knife and a razor saw.

When you're done with clean up, add some hooks to the end of the chains left on him. I took mine from the weapons on the WHFB Chaos Knights. One has a skull on it since, you know, it's Khârn.

Khârn is fantastic and those Chosen look absolutely bada**!

QUOTE (Koremu @ May 24 2010, 09:36 PM) <{POST_SNAPBACK}>
I'd just like to mention that I would like to use Matt Ward's face as a pinata for the abominations he has made of the two Power Armour Codicies with which he was entrusted.
If you have ever read Army Book: Chaos daemons then you know this is but a mild punishment.

I see that one with the Blood Angel chest plate looks interesting, I will be watching for him

I am really loving those Chosen. They really do capture the feel of veterans and each one has a unique feel, while still remaining coherent as a unit. I'm definitely going to keep an eye on the progress of those guys.

Damn just bought Khârn and was planning to convert it like the image we see of him in the codex but was finding it too complex. Good job on that, looks realy dynamic. If you don't mind i might also borrow the idea. It's a less painful conversion of what i had in mind.

Wow, it's been awhile.

I'll get a second update in before the 1st. Real life caught up and really threw a wrench into my plans, so the progress is severely lacking.

My goal at this point is to get all the basecoats on, and hopefully still have some time at the end to get into shading and highlights on Khârn. 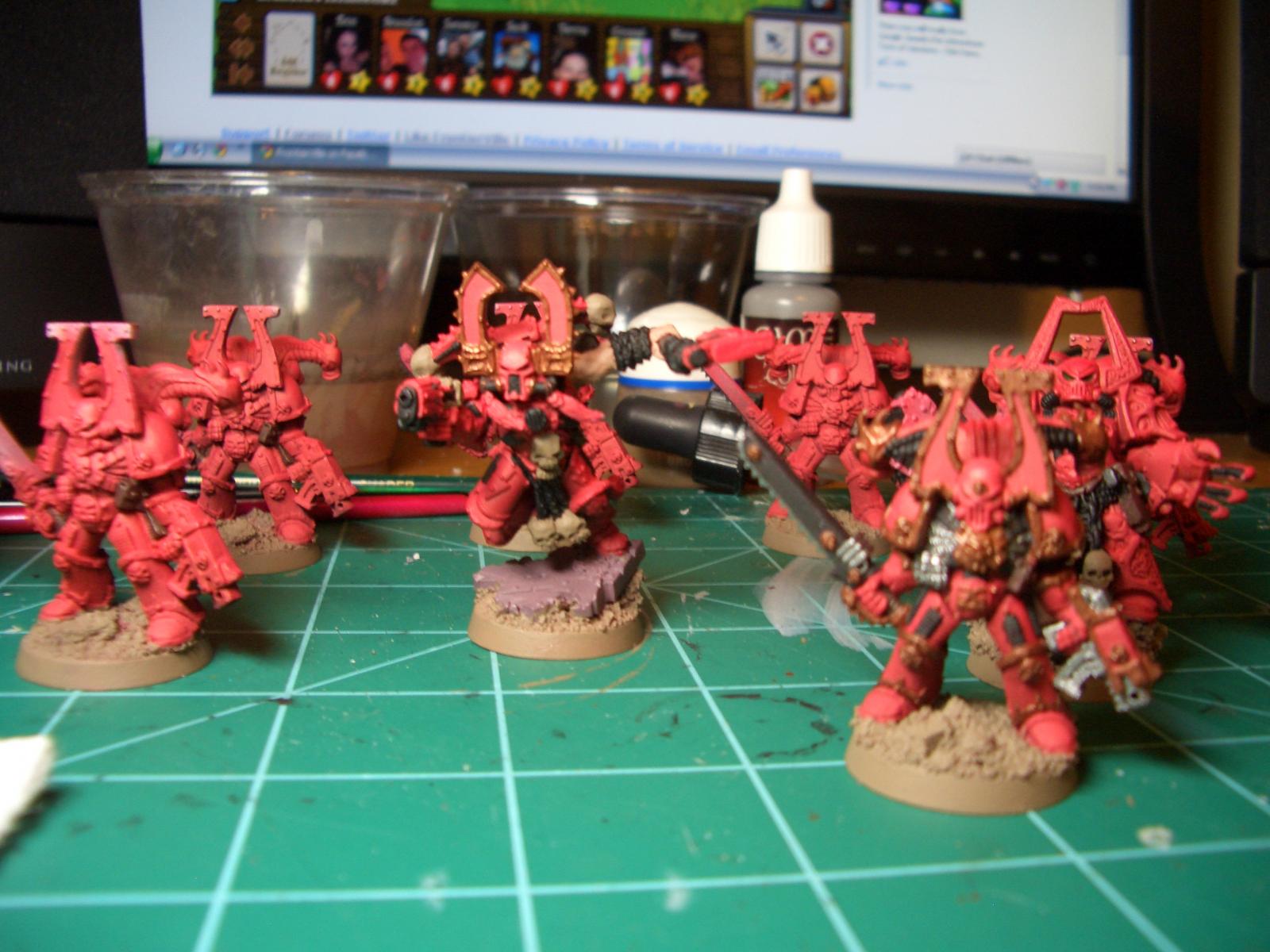 overall shot of the group in progress. 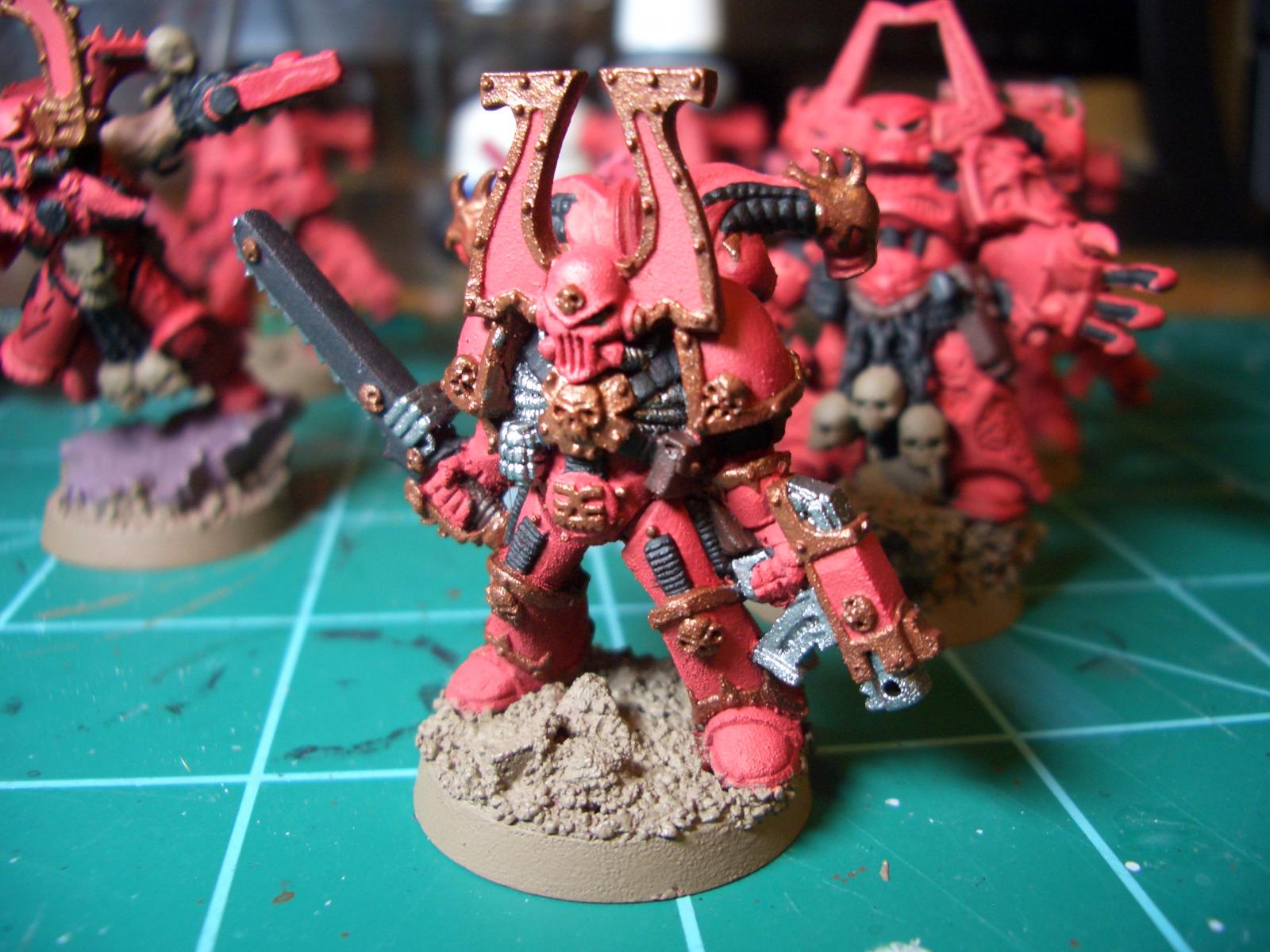 this is where I want to get everyone for the moment. 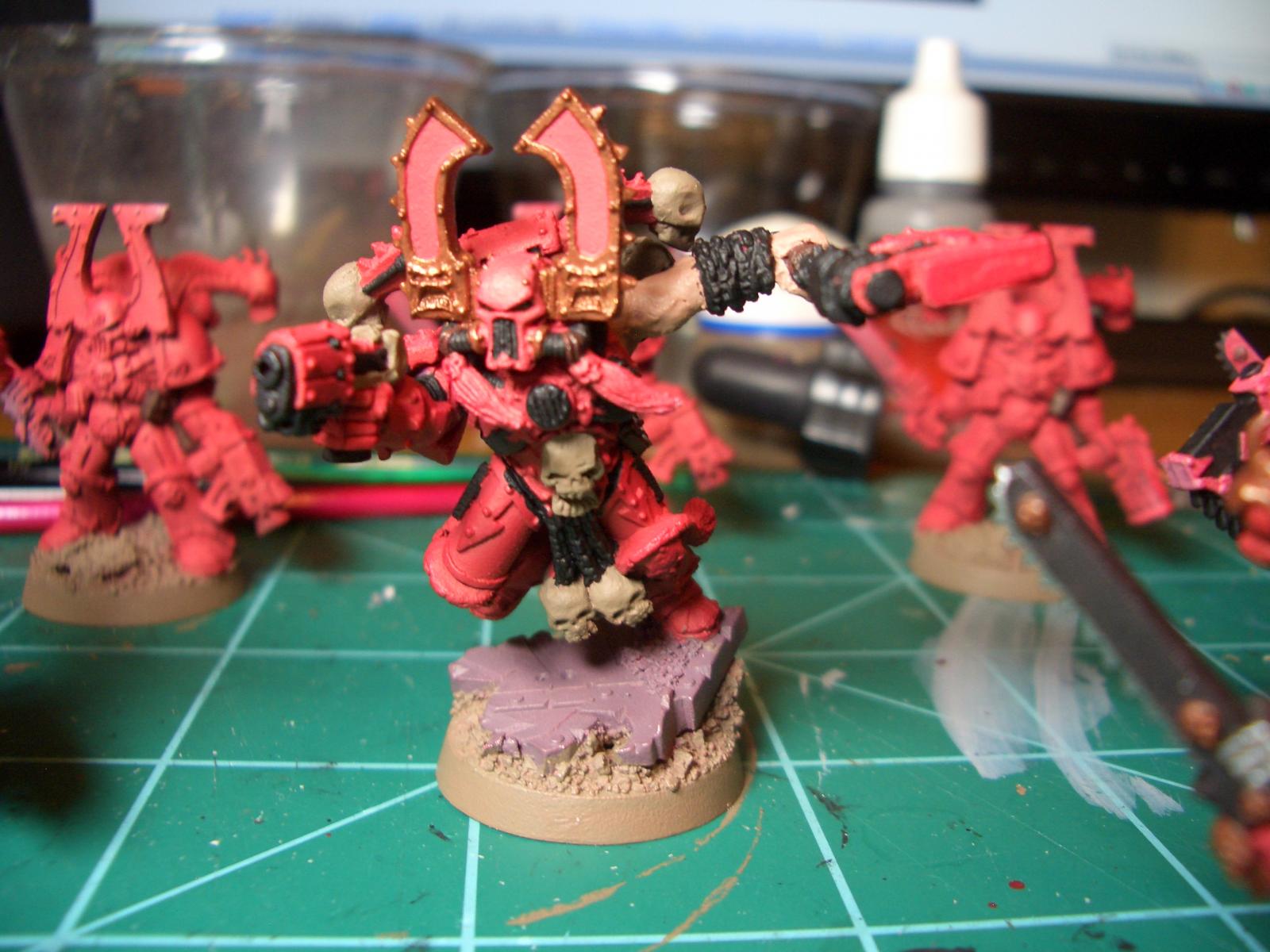 Khârn still has a ways to go.

I'm happy with how the red turned out. A little shading left to do, but the light I took the pictures under washed it out compared to how it normally looks.

I really like your use of those older minis, you don't see them very often and they add some good variety to the mix. And your version of Khârn is sick, but I can't help the feeling that I've seen an almost identical version of him somewhere...

QUOTE (Decoy)
I've always been scared to wit's end of Khorne stuff. You boys might have been nerfed, but by the Gods, you still have your reputation.

Alright Update 2... I've only had a few hours to paint between the last update and now, but I had to get something in under pain of chaos spawn mutation. 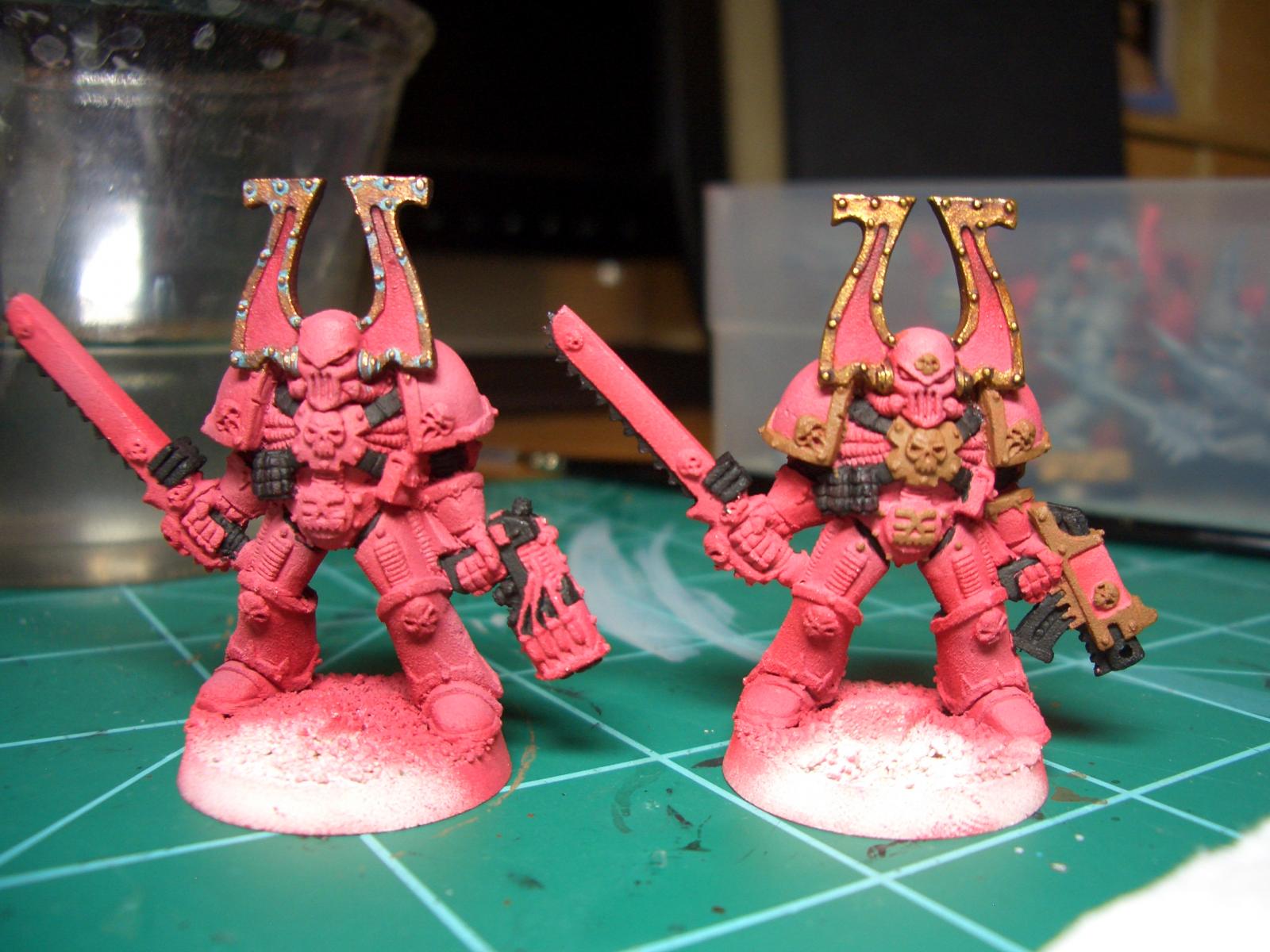 My experimentations with metal choices. It became clear early on that NMM was not going to be for these guys, due to time constraints. on the left, I went with the aged bronze that came out so well on my Space Wolves, but not as well with these guys. I chose the gold on the right initially, but then found a recipe I liked slightly more, (and is quicker to apply) so that's what I went with. Not too much difference in the end, though. 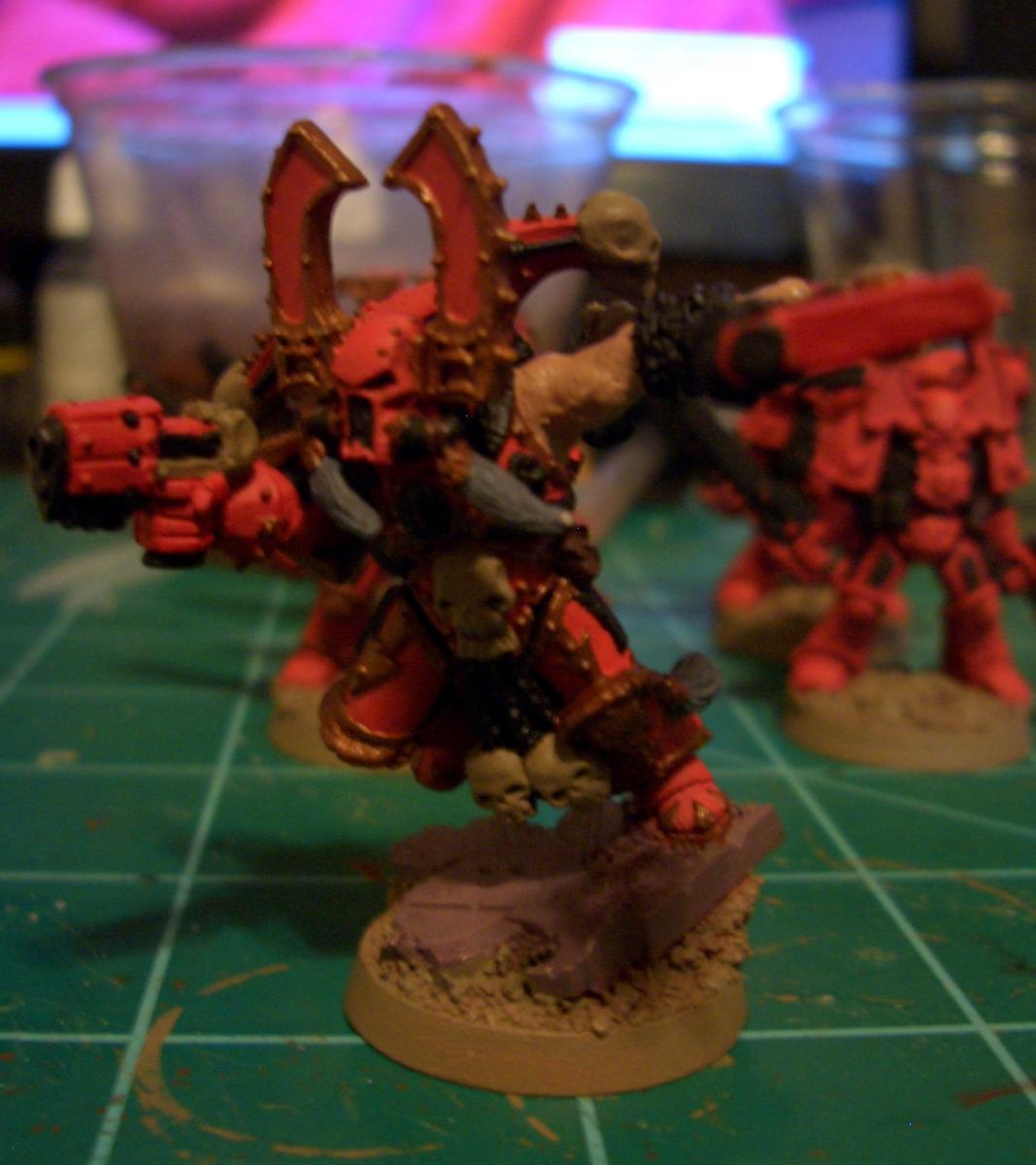 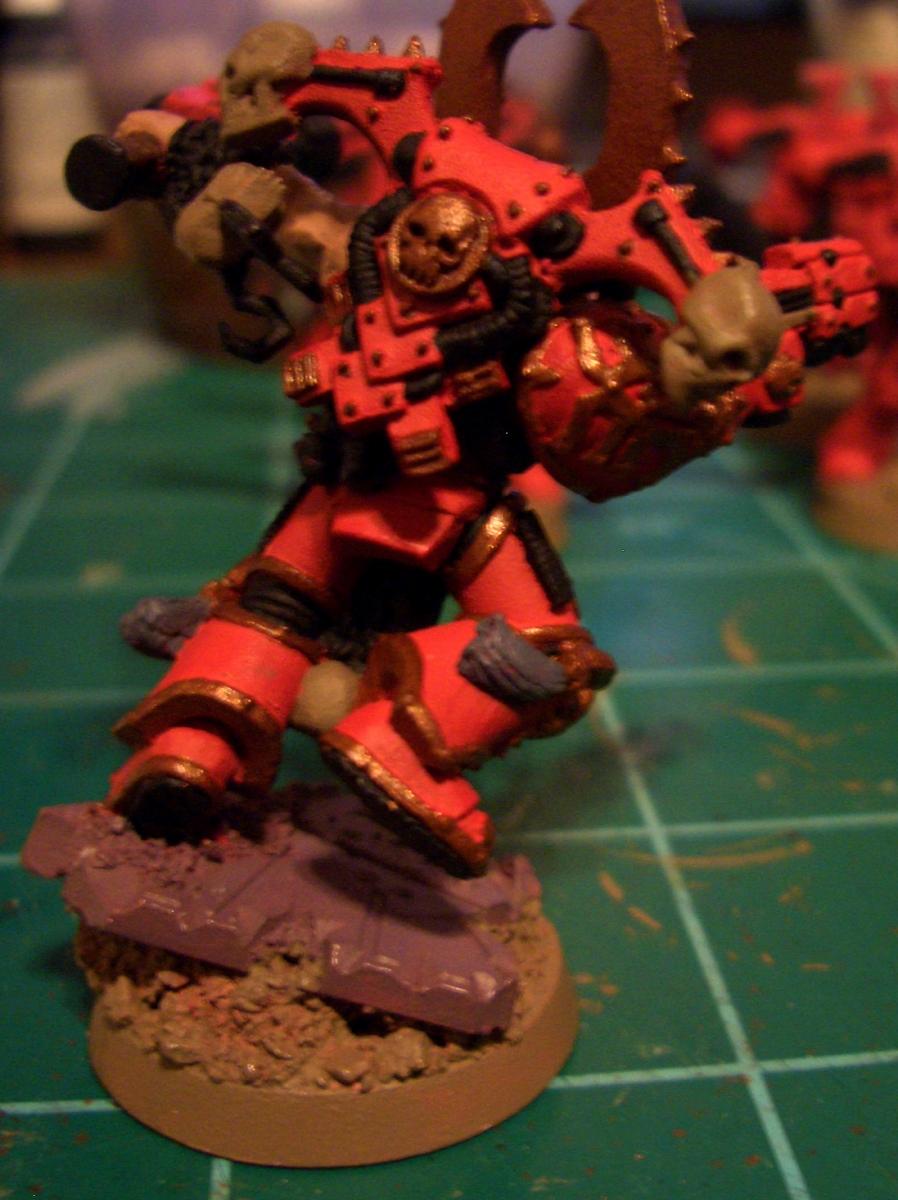 I finished Khârn's basecoating, aside from the boltgun metal that would technically be the basecoat for some of the black. The photos are a little dark, but I wanted to try to get shots with the red less washed out, and haven't had time to break out my lightbox and my wife's far superior camera, so maybe you'll like, maybe you'll hate, but either way it's a job... done.

that Khârn is sa-weeeeeet! but hows the progress on the skull champ going? that looked like a really neat conversion! i will be folowing this WIP.

The skull champ is mid basecoat right now. I'll get my first July update in well before July 25th, though, so you'll see some progress on him soon.